If you like your winters warm Key West is living up to billing. There is no sign yet of cruise ships of course but the winter tourist season is in full swing, full at least in the pandemic ear we find ourselves living through. 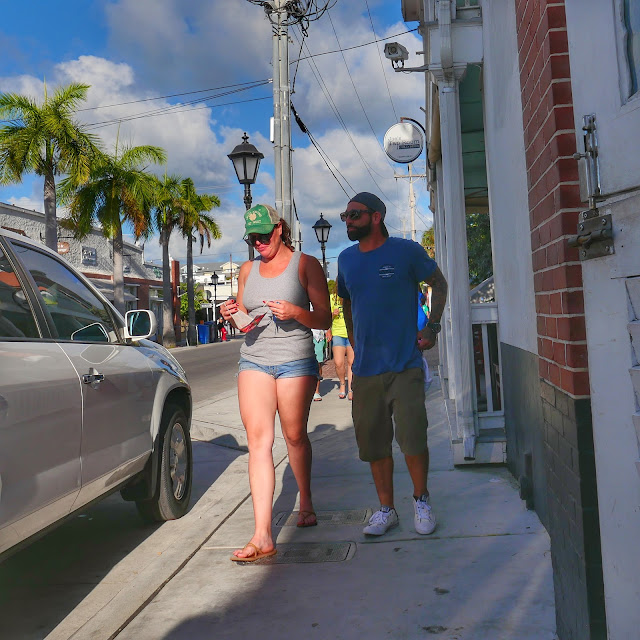 I took a masked lunch break downtown to remind myself of the sunny small town vibe I prefer to the rather grungy grayness of the big city Up North on our recent van trip. 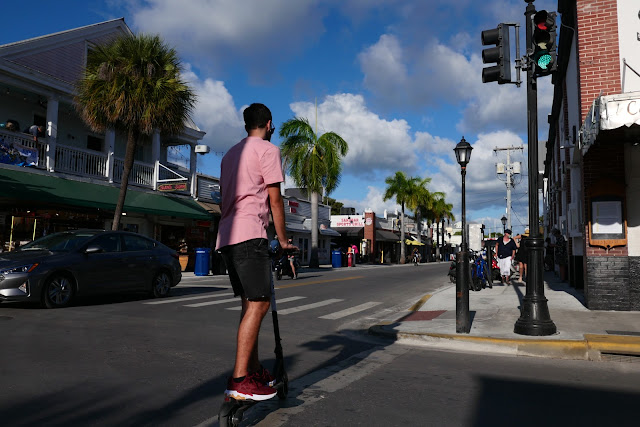 Sloppy Joe's, the iconic bar has instituted a one way system with the way in on Duval Street and the doors on Greene Street functioning as well marked exits. 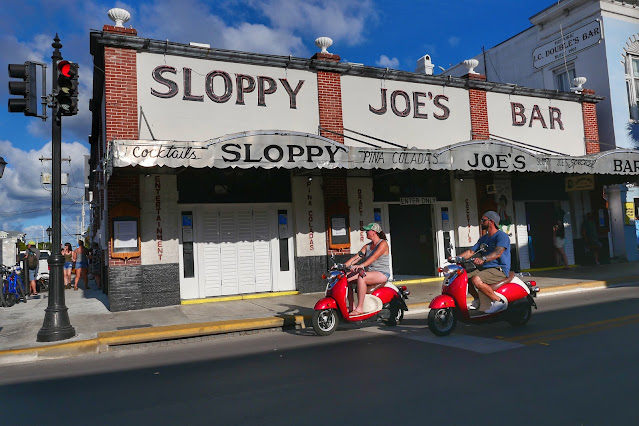 Masks are required outdoors, as are cell phones you would think. I was enjoying the sunshine and the blue skies more than my phone screen. 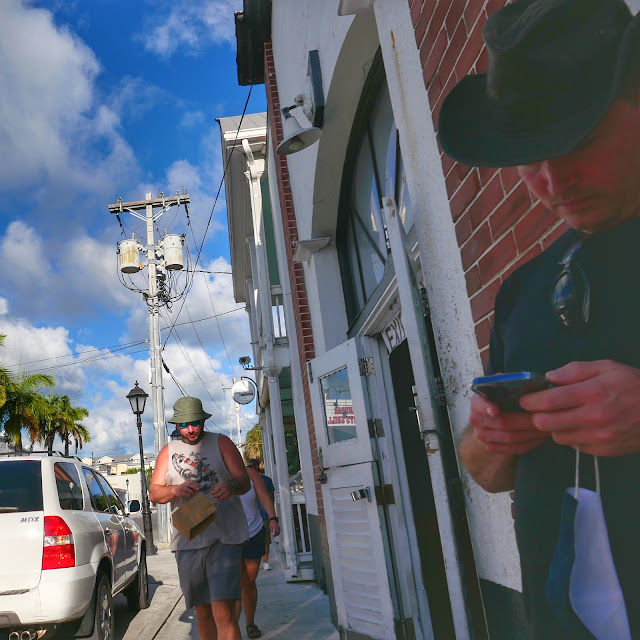 Warm enough to discard a mask to drink while walking topless no less: 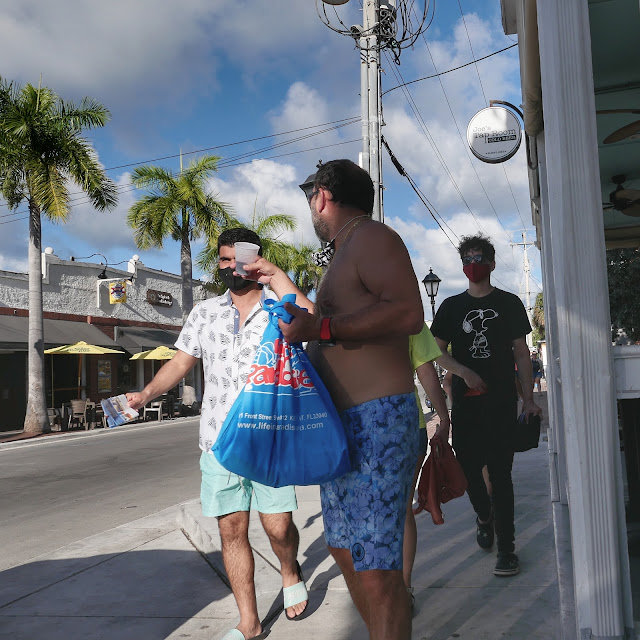 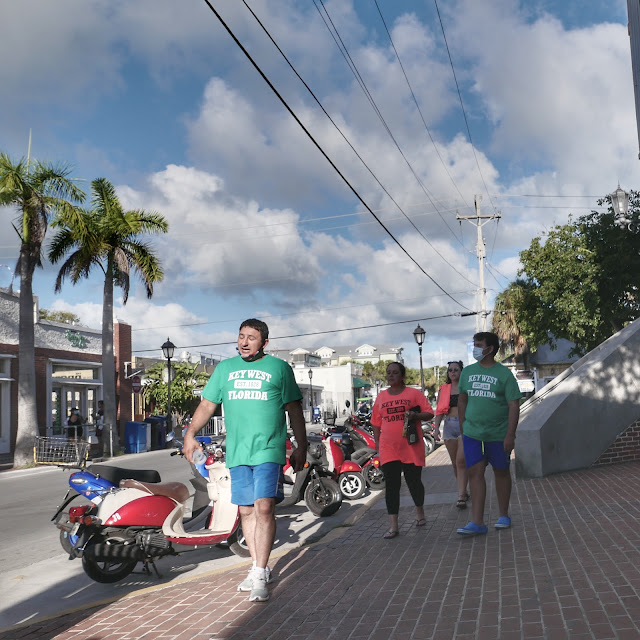 Eating and walking, proving anyone can multi task. 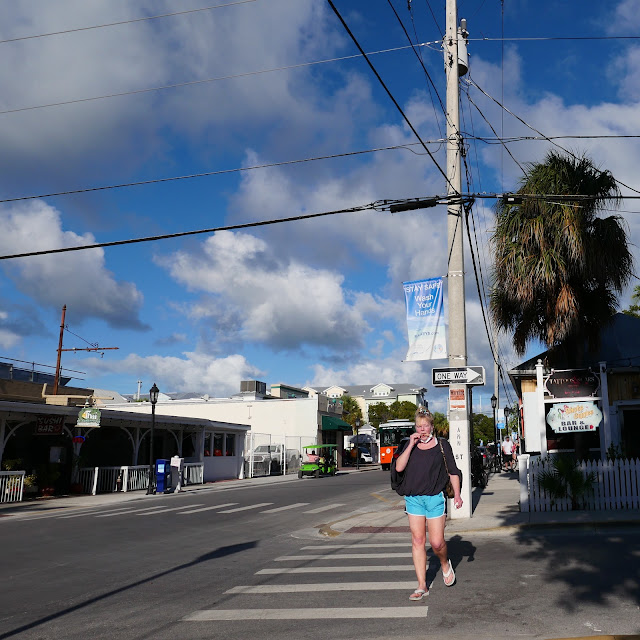 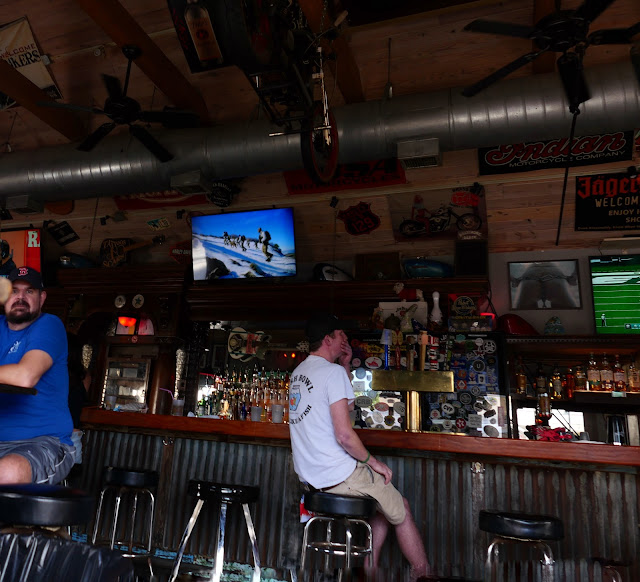 Paying to park ( a car I hope; not the bicycle). 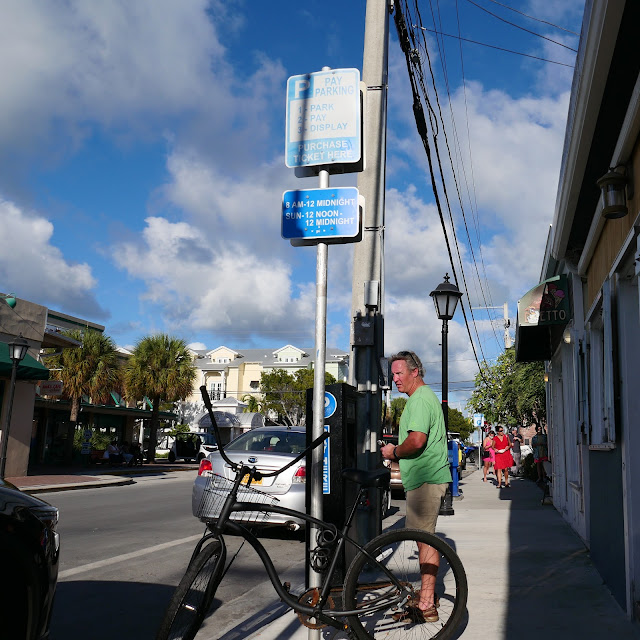 The Battle Of Ocean Pond

The morning after Thanksgiving dawned and I was up and about waving a camera and a dog at the world and expecting bright flamboyant Florida colors in the sky. However this was as good as it got and what started out as a test photograph ended up as the sole picture of the sky with any color other than gray. 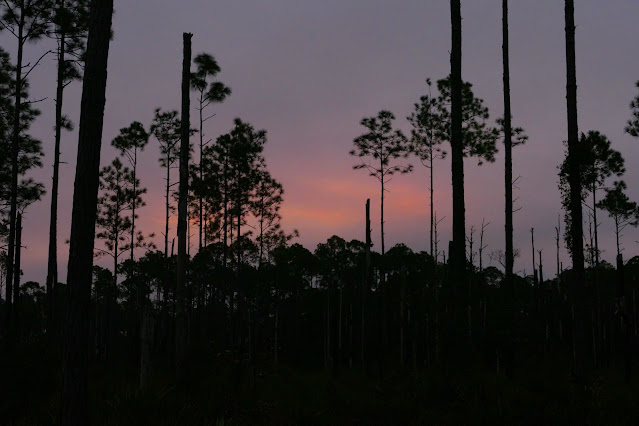 I stepped into the state park and followed Rusty's nose checked the scrub palmettos and pine forest in the state lands that didn't look so different to the National Forest land on the other side of the fence. A car had approached Thanksgiving evening as we sat down to our stuffing and beef dinner and the occupant said he had driven from the Olustee Monument State Park up the road. Weren't we surprised! 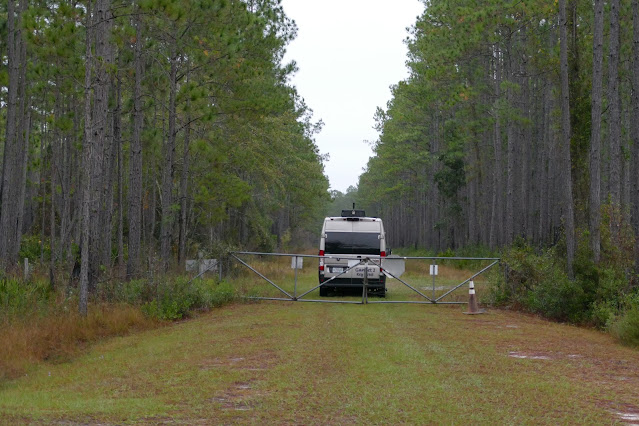 These palm fronds have spikes on the ends and make walking through them rather more painful than you might enjoy. 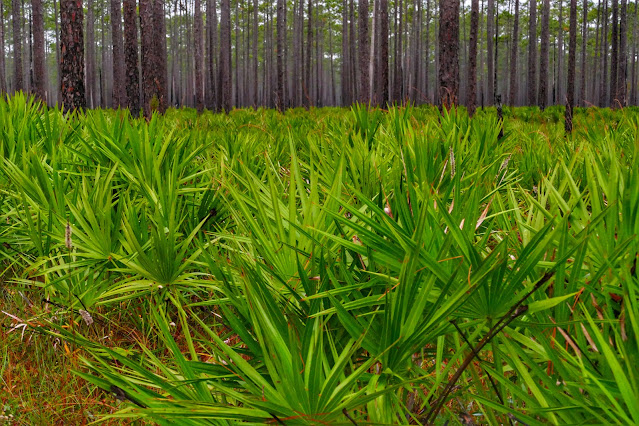 Thge trick then is to stick to the roads and trails. 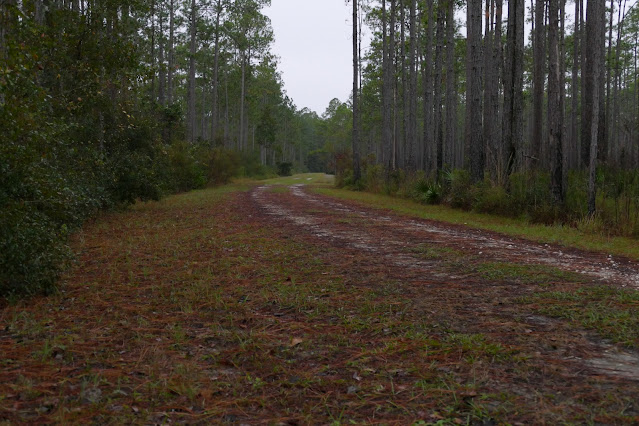 Somebody with a powerful motor mower had carved a path through the pines. A local resident told us this is the site of a battle and the ground is apparently littered with human and other remains from the 1864 conflict at Olustee. 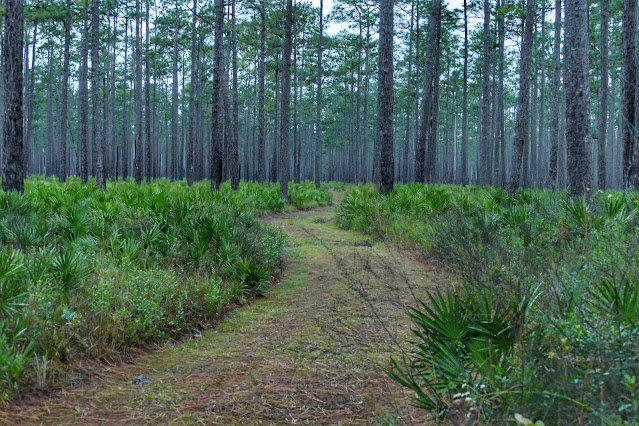 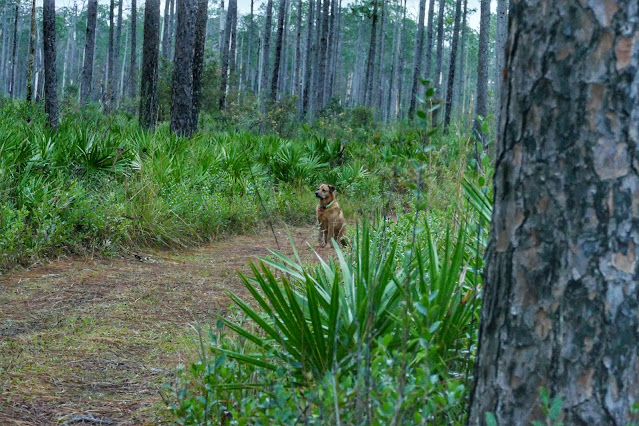 We were alone in the silent woodlands as we put the kettle on and got ready to seek our fortune in Gainesville at Trader Joe's. From the sublime to the prosaic. 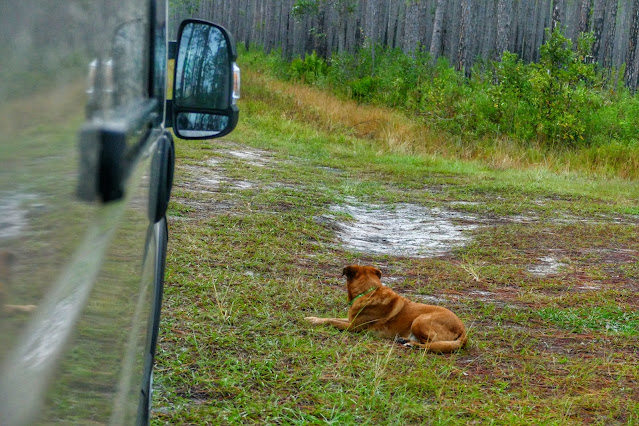 The gods had figured out it was a day off for me so they obliged us with yet another sprinkle of rain. 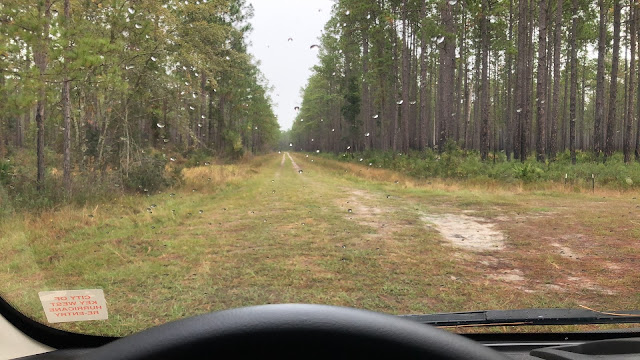 I was untouchable, bathed in the rays of pure adoration from my very misguided dog; 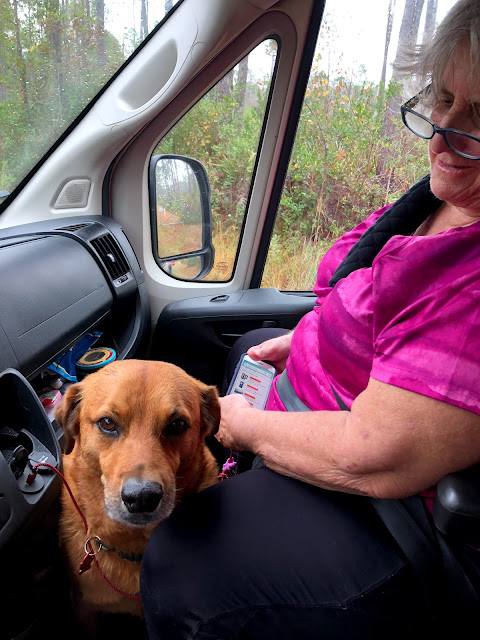 We drove back to Highway 90, turned left off the dirt roads and pulled up at the Olustee Battlefield Monument. There were 5,500 Union troops coming from the east and they met up with 5,000 dug in Confederates at Olustee, near a lake still known as Ocean Pond which is the formal name for the battle that ensued in February 1864. 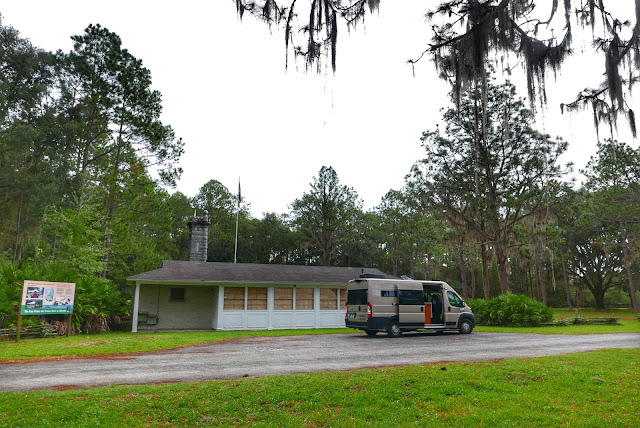 The Battle of Ocean Pond on 20th February happened  rather by accident and ended up being the largest Civil War conflict in Florida, hardly surprising as the peninsula was pretty much uninhabitable and key West, the largest city in the state was firmly in Union hands. 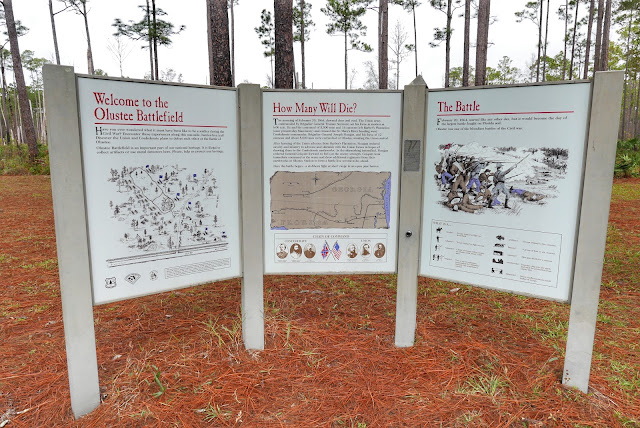 The short version is that Union troops landed in Jacksonville and the General in charge, Truman Seymour took it on himself to try to capture Tallahassee, the state capital. Had he succeeded you might have heard of him before today but the Confederates won the battle and the Federal forces contented themselves with holding Jacksonville while leaving Tallahassee alone. 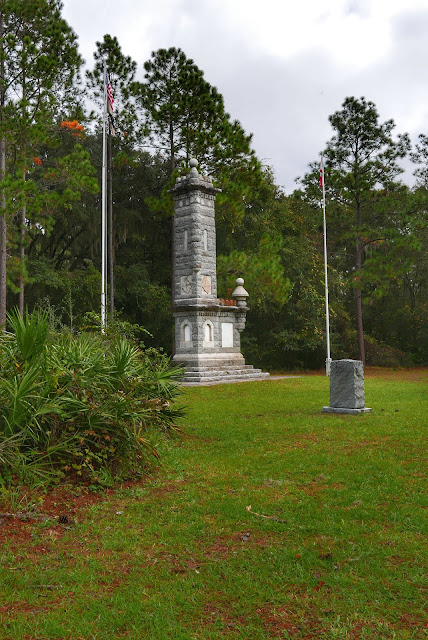 The battle itself was a mess, with the Confederates dug in around Olustee Railroad station and the Federal General Seymour underestimating his opponents assuming them to be untrained militia. Instead the Confederates had regular troops who had been sent as reinforcements from Georgia and they shot up the groups of lackadaisical Union troops as they advanced piecemeal. The destruction of the Union Army had a weird footnote inasmuch as their retreat from the battlefield was covered by African American soldiers. They did their job valiantly and more than that their fighting presence on the battlefield enraged the Confederates who stopped to slaughter the wounded black soldiers and thus allowed the bulk of the Union army to escape back to Jacksonville. Weird details of history. 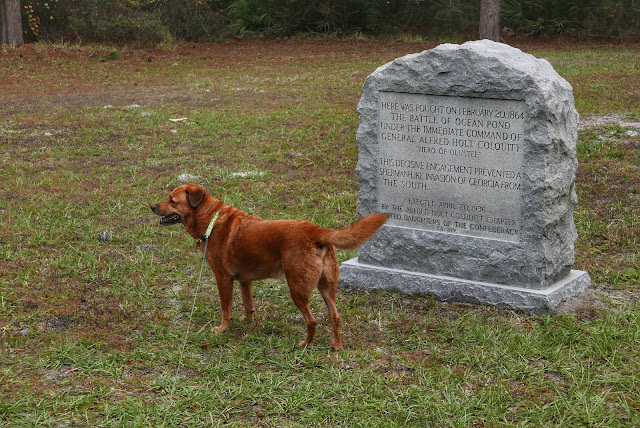 Not so weird were the casualty lists: The Union army lost 1800 dead wounded and missing while the Confederates  lost about a thousand men the same way.  A pretty spot in which to die I suppose but what  a waste. 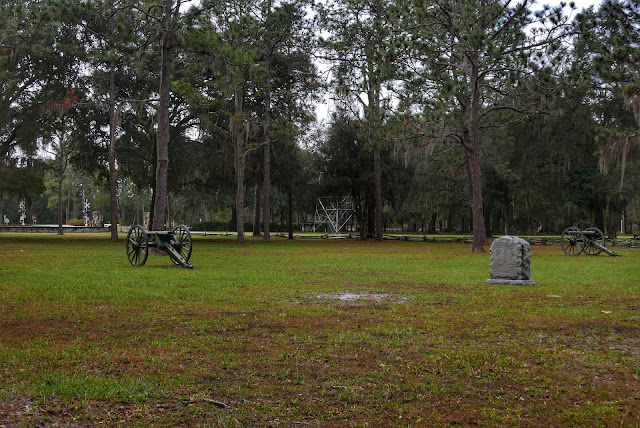 This is the other end of the road closed by the gate, "Road Closed: Gate Ahead" read the sign. Rusty wasn't interested so we inspected some trash cans instead. 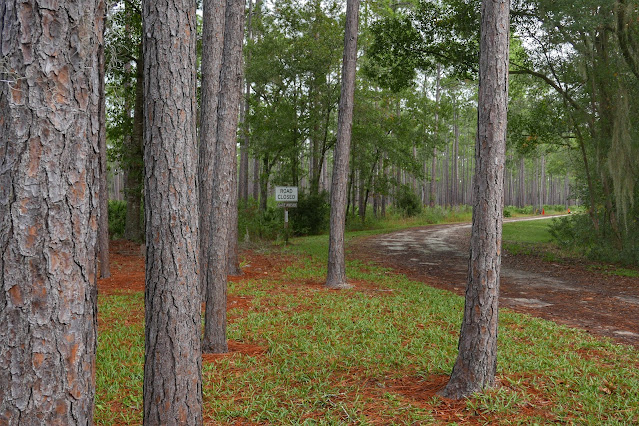 Trader Joe's was empty according to my wife, the masked shopper, so she amused herself checking the aisles while Rusty slept and I read on the bed in our portable home. 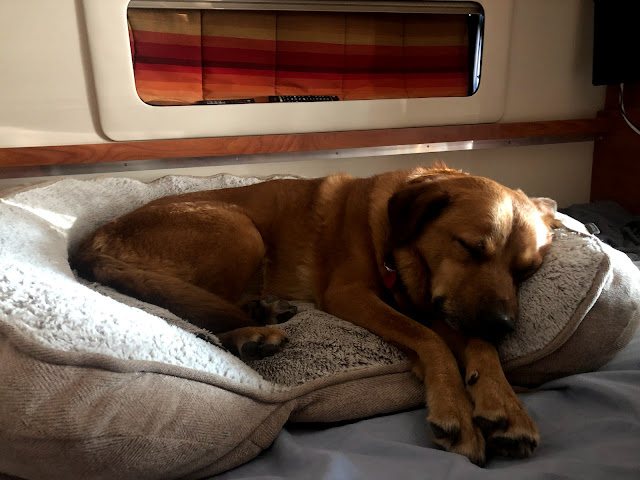 My wife got this picture later when we stopped for dinner, but while we drive he prefers to be up front with us, snug between Layne's legs. He is getting used to the van, as are we, as we continue to refine our use of the vehicle and the accessories we learn to live with. We learned form boat living that adapting to the space and the systems would take time and we are finding it to be so. I have no idea how people step out of their homes into a tiny space, with no prior experience, and don't go mad adapting as they learn on the road.. 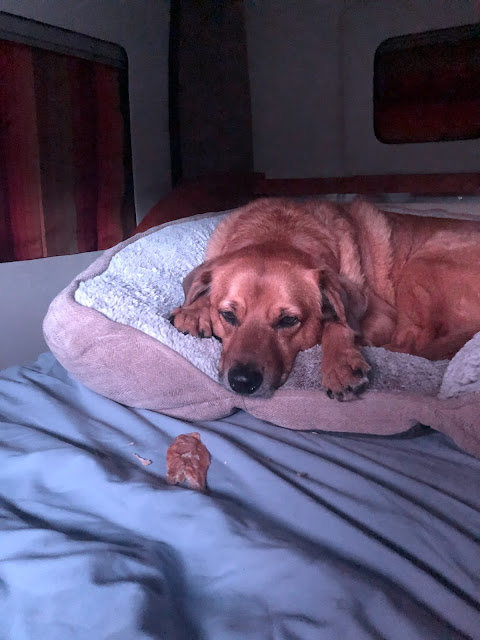 People who don't know me very well think I am impulsive but I am the least impetuous person om the planet. What looks like a wild unplanned burr under the saddle is a carefully thought out idea gradually pout into practice. During the long drive home my wife and I reminisced about our first foray into the world of RVs looking at vehicles at the Tampa show in 2014 with Cheyenne the ever patient Labrador in tow. Commercial vehicles never convinced us with their shabby construction and weird lowest denominator equipment choices. By the time we stumbled on an affordable custom builder we were ready to make the leap but it took us almost six years to get there. 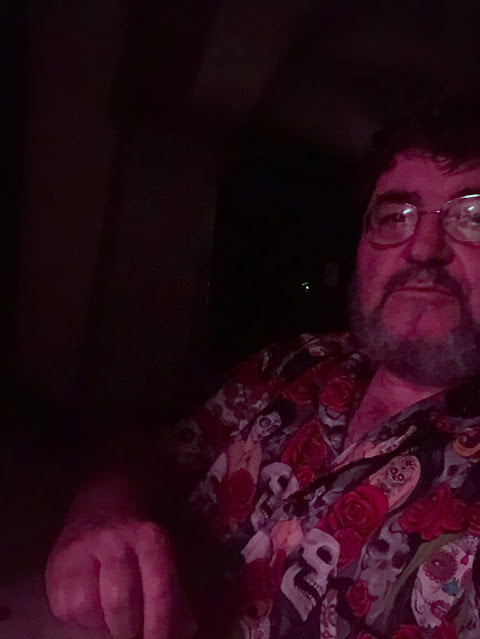 We got what we wanted, our own eccentricities satisfied to a build quality we cannot complain about. I feel lucky and furthermore I feel very thankful we both enjoy this odd way of traveling and Rusty is getting used to the program too. It was a good week away from home and in three weeks we plan to do it again. 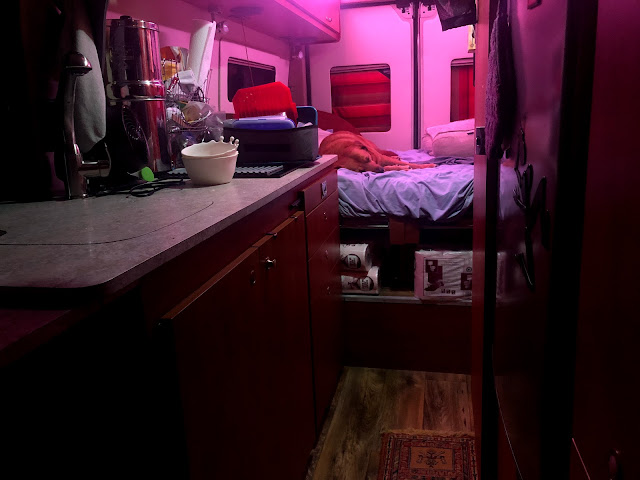 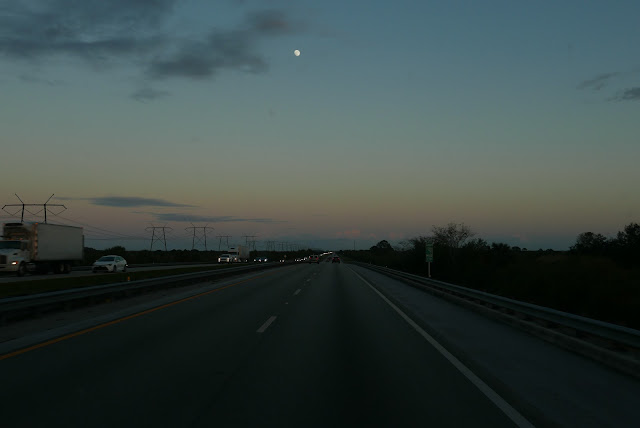