By the time Duval Street gets busy and by the time the private parties are in full swing as it were I am safely tucked up at home resting between one day at work and the next. But with a few minutes to spare during my lunch hour I can get to wander Lower Duval this week of Fantasy Fest. 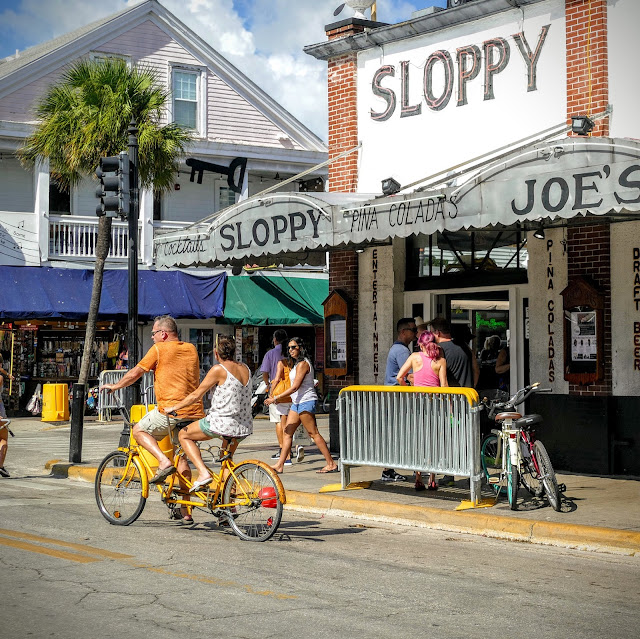 The Grand Parade is Saturday night and the Locals' Parade now known as the Masquerade March is on Friday but the campy dressing up is underway all week in the "Fantasy Zone" which is basically Duval Street and the side streets off it. The rules while clear do not necessarily mandate good taste or common sense. 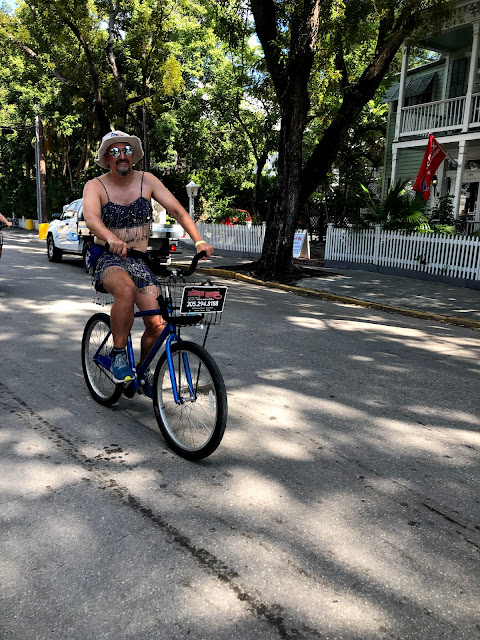 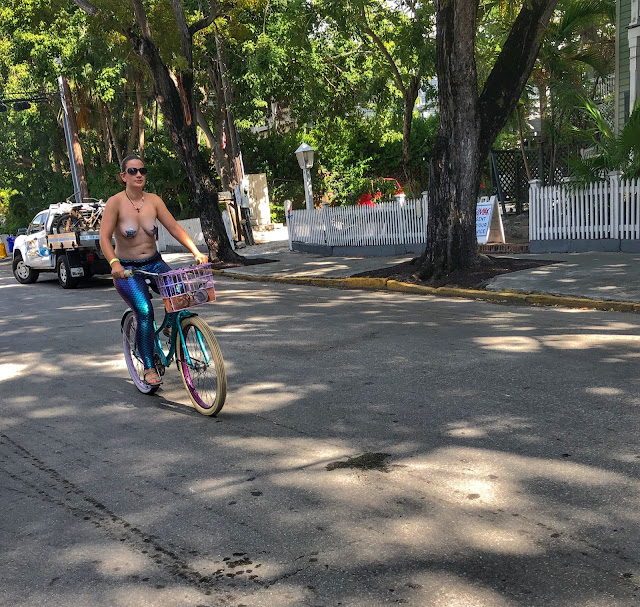 And if body painting is what you want all you have to do is pay someone to paint you, but the painting must go on out of sight of the general public. 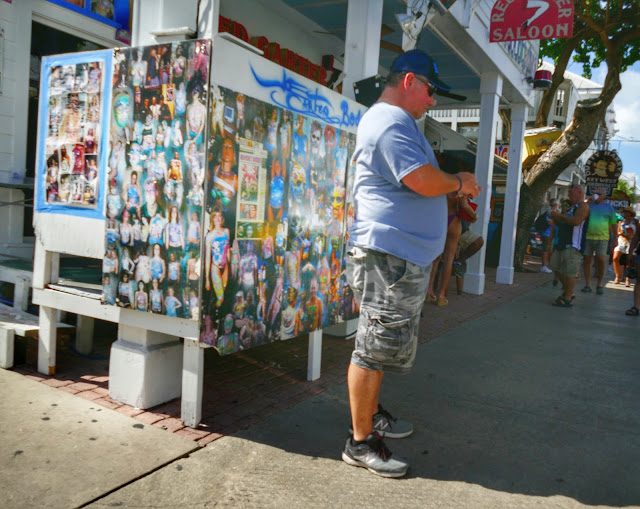 There are plenty of spectators at the bars and considering it is still quite hot, near 90 degrees and humid, being half undressed has its own logic. 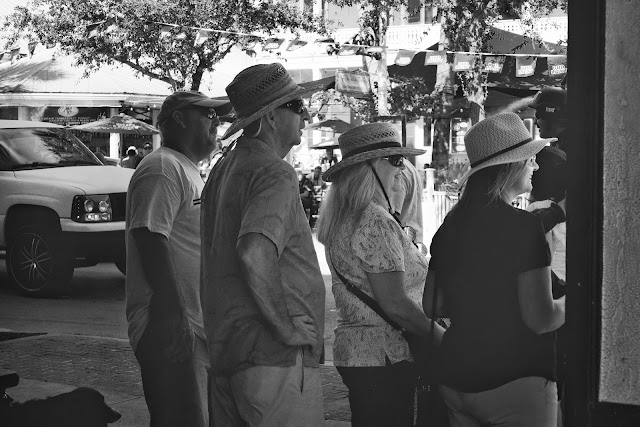 Like I said taste and lawfulness do not go hand in hand but in the early afternoon Duval Street is mostly given over to costumes though covered nipples are occasionally on display. 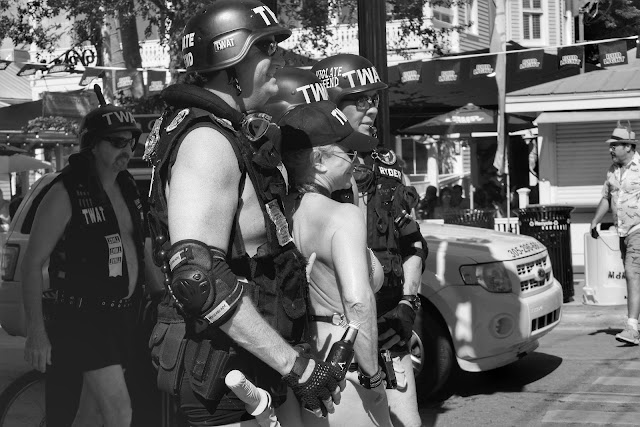 I'm not sure what cultural reference is intended with giraffe heads but frequently I am baffled by costumes that refer to trends that have completely passed me by. Giraffe heads? No idea. 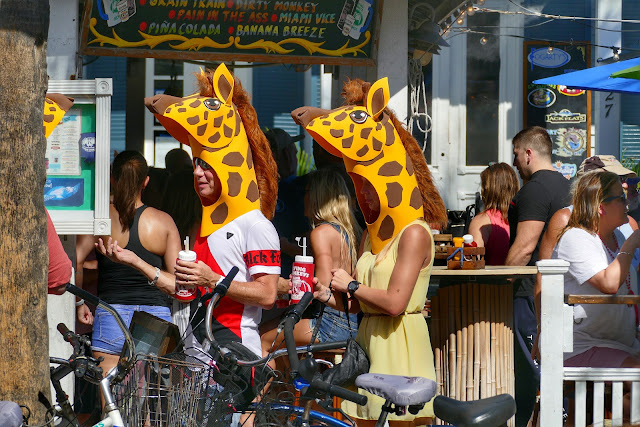 Kerb seating is not entirely sanitary in my opinion but the heat gets to people who aren't used to it. I was surprised by the number of people walking the sunny side of the street. 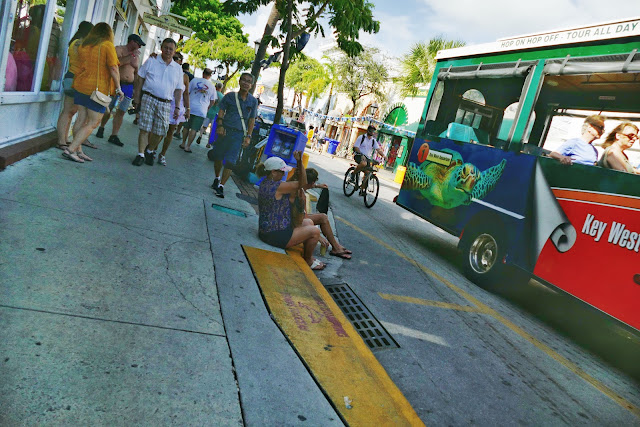 He was looking at Sloppy Joe's somewhat in the manner of a pilgrim and when I noticed his attire I figured he might do well as a sample of some of the public costumery this week brings out in visitors. 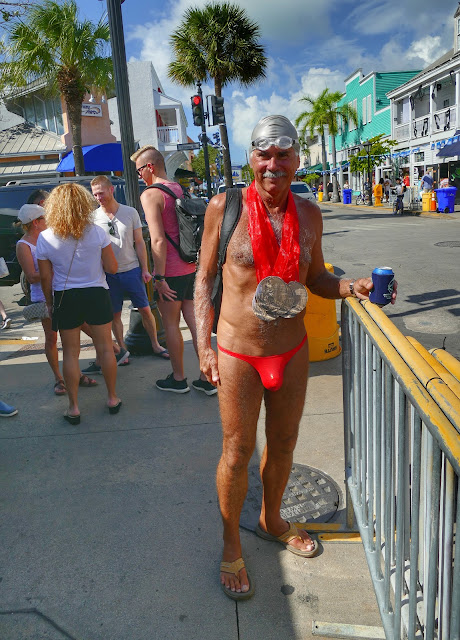 I did see a t-shirt advertising Key West as the home of the bizarre and the non conformist but somehow this drive to be "non conformist"  for a week by  conforming to peculiar notions seems a bit forced. 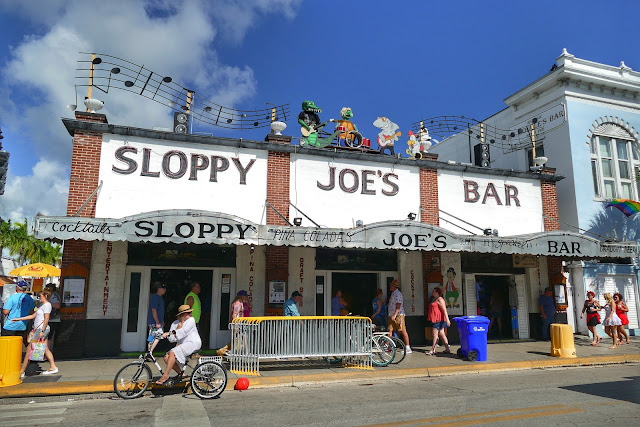 But there is a lot of interest: 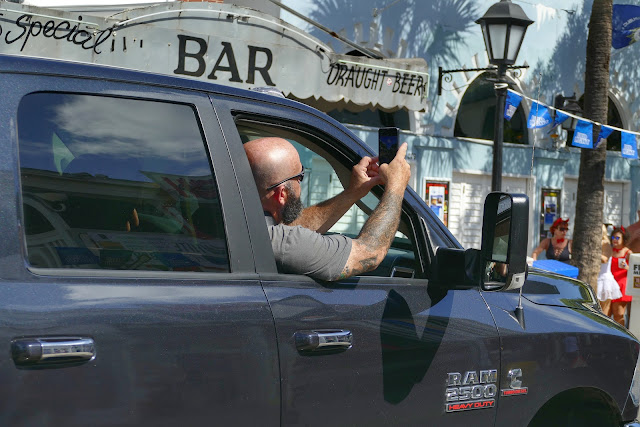 Originally Fantasy Fest was dreamed up as a way to bring life to a moribund  winter tourist economy. By the time September came around three decades ago Key West had run out of business and therefore money for the employees of the seasonal tourist trade. Nowadays tourism seems to be a ten month a year proposition with the hiatus all too short in the summer after schools open with a  few quiet weeks before this mayhem starts the winter. Happily some few people make an effort to dress up for the event: 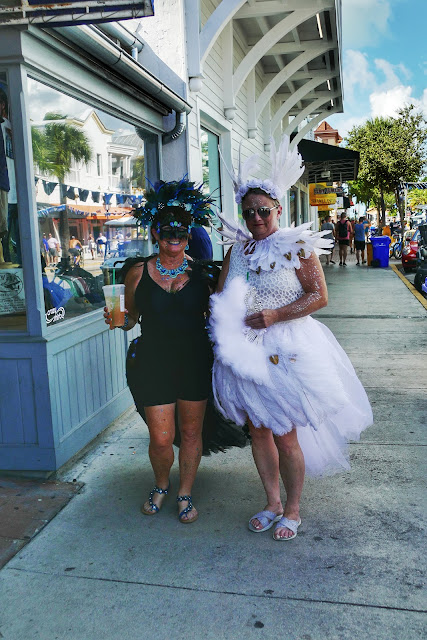 Some others ignore the whole mess and go fishing instead. 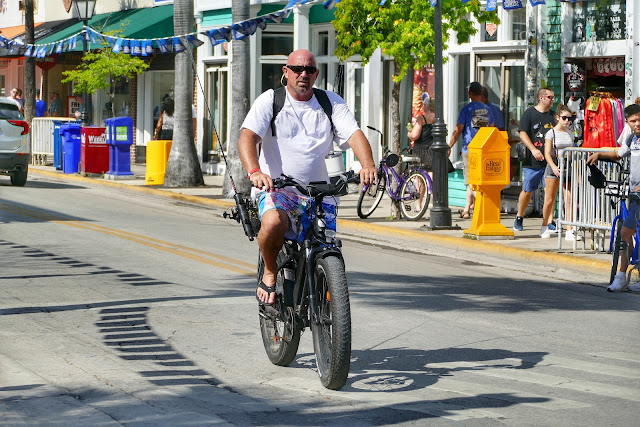 This picture below, struck me as a bizarre juxtaposition between the plastic monstrosity hanging off the front of the hot dog cart and the actual live woman the cart operator was talking to in the back. Perhaps I think too much. 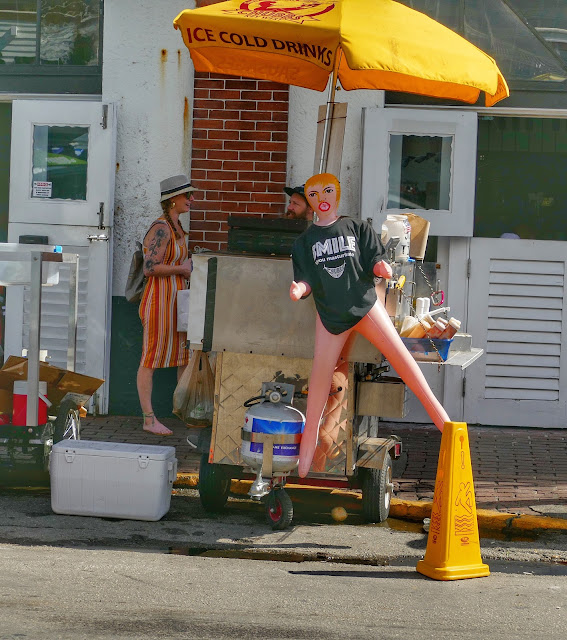 Sloppy Joe's, a refuge from the sun but not the naked flesh: 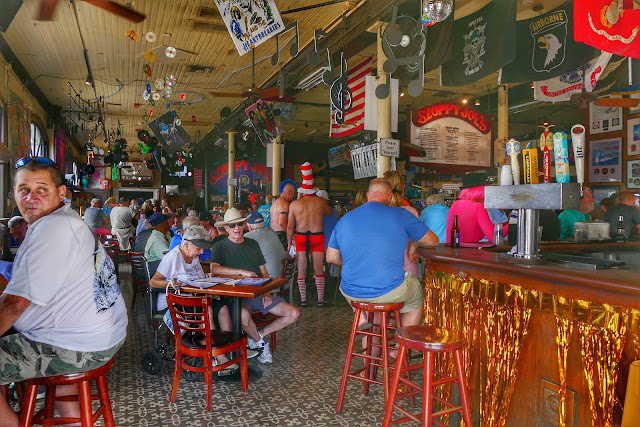 I accidentally over exposed this picture but I ended up liking the image of speed, speeding through Duval Street in the way to someplace more serene...? 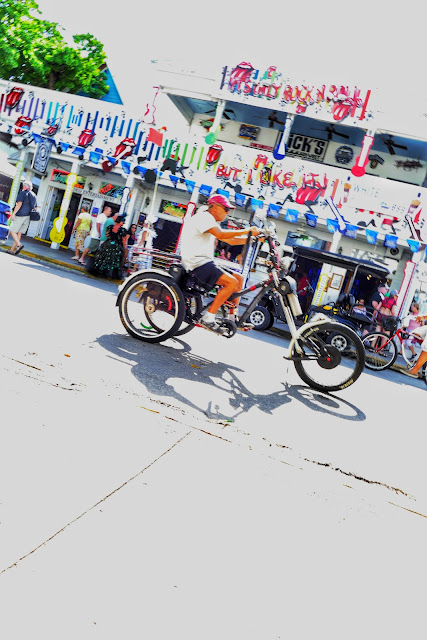 And then as you stroll casually down Duval Street not only will you pass painted people in person and on the walls but in amongst your ranks you will find people in peculiar and apparently random stages of undress. Act as though it's absolutely normal because it is right now. 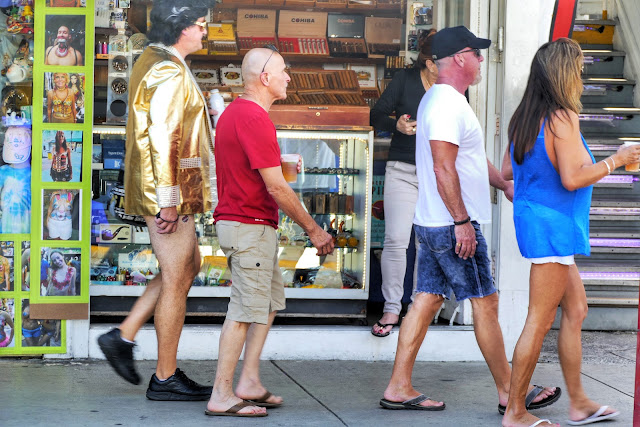 I saw two cheerful people on the steps of Fat Tuesday and they posed happily when I asked. South Pacific anyone? 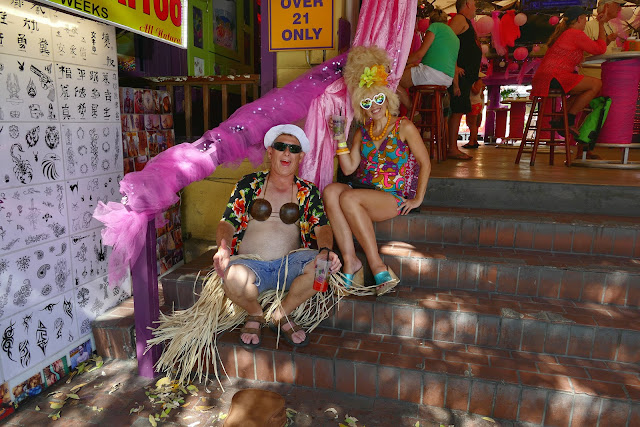 And among the crowd we  find the usual flow of humanity more or less dressed checking out the scene. 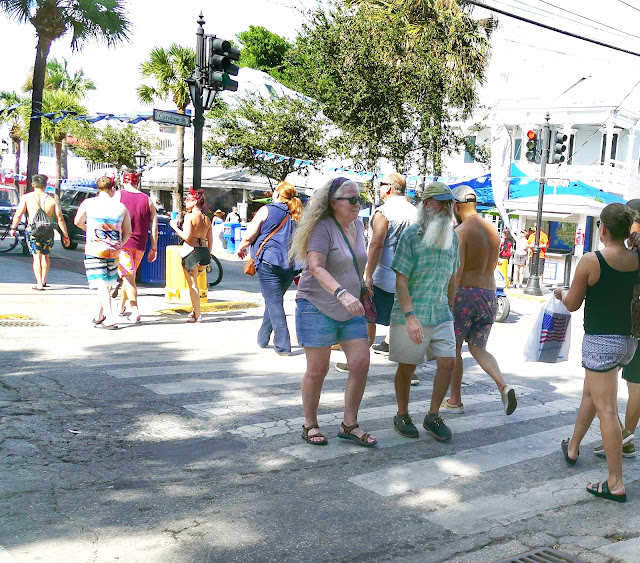 She did a lot better than I did when I was in a wheelchair. She bopped along without getting stuck or nearly tipping over. I was impressed as I found Duval impossible when I wasn't able to walk. 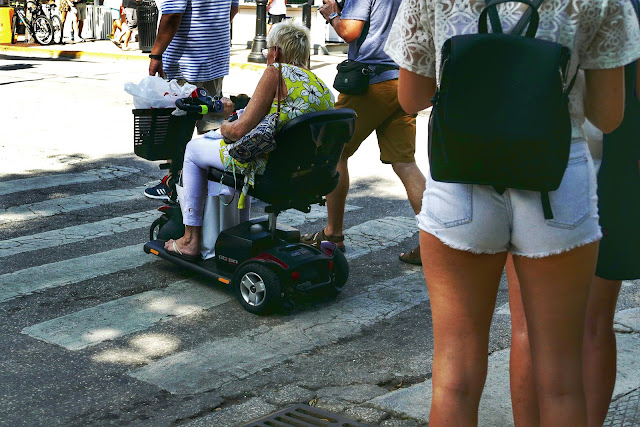 I'm not sure whether this electric bike guy was dressed up or was he dressed for business as usual: 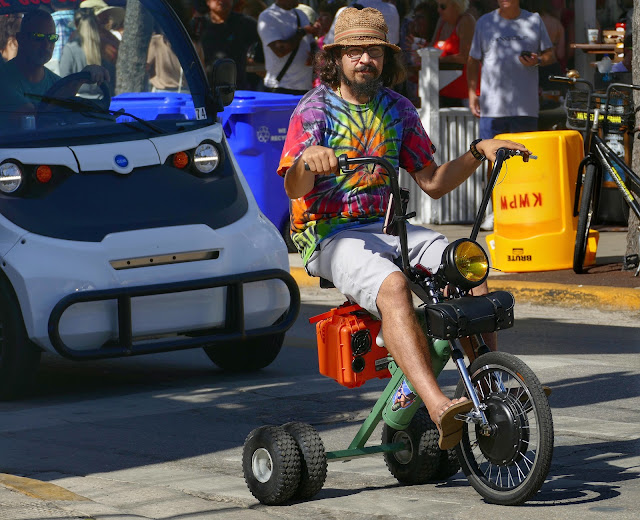 This was the speed demon from before shown travelling at his actual, relaxed rate of speed cruising the other way: 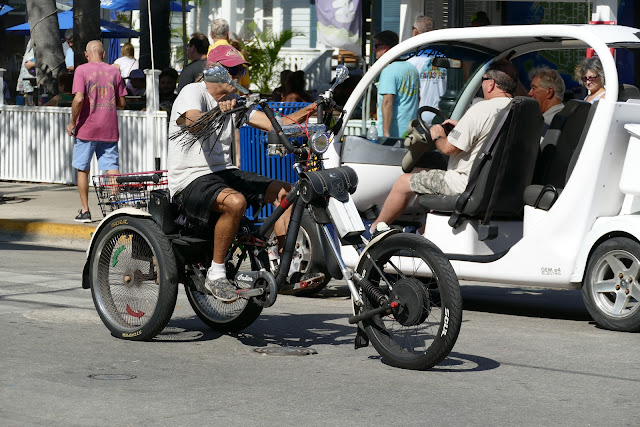 The obsevation deck at the Whistle overlooking Duval Street: 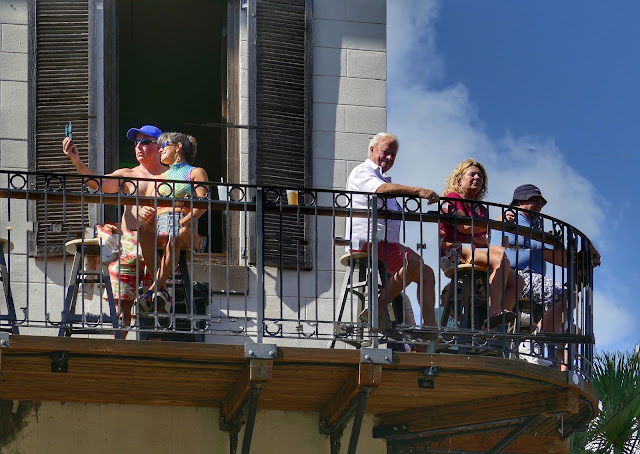 And so back to the scooter and the end of my lunch break. Time to give my eyes a rest. 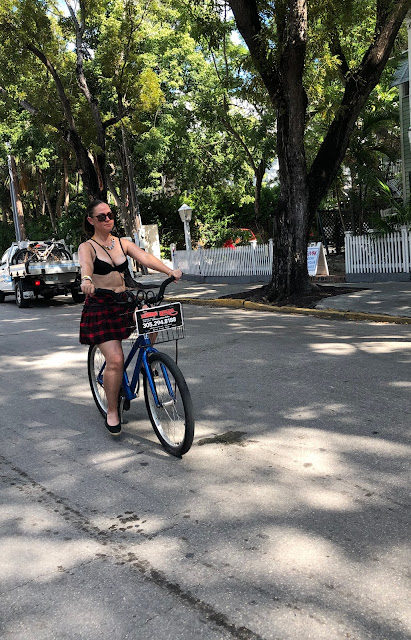