Yesterday Eleonora took me to Orvieto, a lovely city of ancient buildings and traditional tufa bricks. However that wasn't the best way to learn to drive so we had to make time to maneuver in the city where the test would take place. As it happens we spent a considerable amount of time circling the headquarters of the communist party. The symbols of a different era looked like a movie set, possibly featuring Warren Beatty or something. 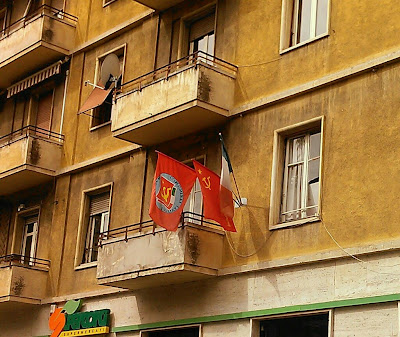 Picture the scene, Eleonora hunched over the wheel me peering out the window trying to ignore the chaos she is sowing in the street while trying to get the perfect picture of the red flag flying here. We were circling a square where the traffic was intense and unyielding and she was swearing like a fishmonger's wife. "I don't think the examiner will appreciate that too much," I remarked as she got cut off one more time. "I need to vent now, before the exam." "Vent away," as we took another turn around Piazza Dalmazia. 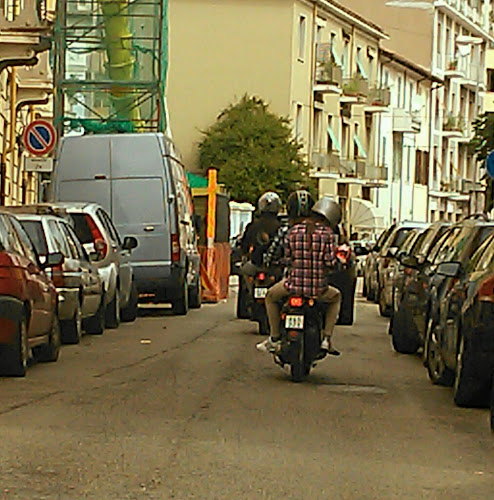 I failed my driving test the first time I took it and then I went to driving school and got it the second time around. I did pass the motorcycle test the first time but I learned to ride properly by reading magazines and learning about counter steering and shifting my body and how to look ahead around corners and stuff like that. Just looking at the text book gave me stress: 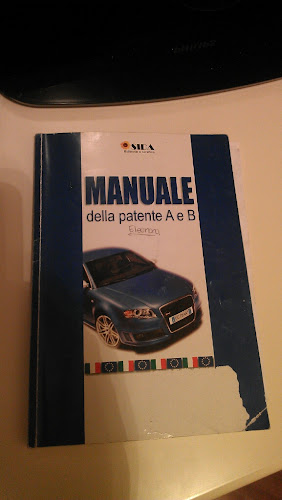 It's nice to be old sometimes, when it feels like they can't just keep on testing you forever. Then again when I think about it we get tested all the time, at work, by doctors and even our driving ability gets called into question as we age. I have long had the belief that motor vehicles do more to criminalize us than anything else. Check this black SUV below, dou8ble parked totally illegally blocking the street. Go right, I told my pupil, which was when the cyclist wobbled into view. She managed to get through without killing or breaking anything. 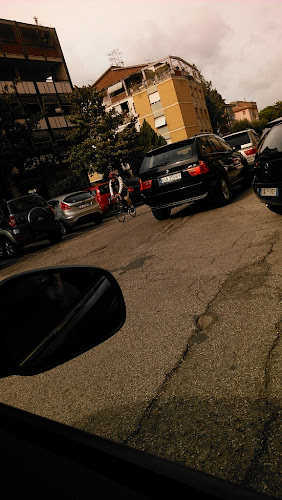 Telephones used to be useful tools. Now they have the capacity to be useful and enormously irritating all at once. At least this mature bike rider was smart enough to stop to talk. Another obstacle overcome. Check out the miles and miles of pink Soviet style cement in the background. This is not medieval Italy. 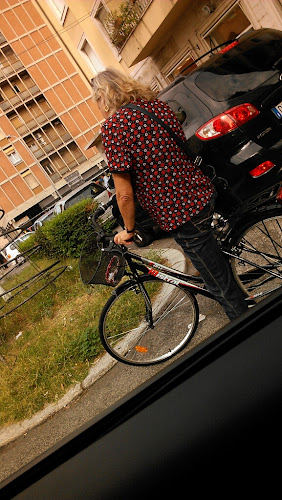 The Romans called Terni Interamna, the city between the rivers but of the past only a few blocks remain. Everything else is modern, functional and not terribly attractive to tourists. Which is odd as the myth of St Valentine was born here. Bishop Valentine of Interamna agreed to marry a Roman soldier and Christian girl and got killed for his efforts in furthering the path of true love. 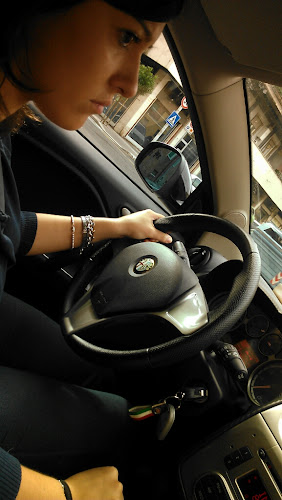 This is not a town where you will hear foreign visitors admiring the architecture. Urban planning is scarce and parking is a nightmare. Many of the streets make Key West look spacious, and vegetation is non existent. 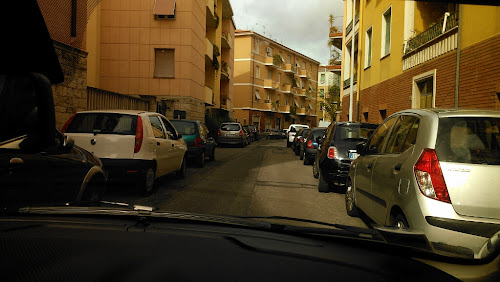 I find Terni more appealing to me for those reasons, it lacks any veneer of sophistication or worldliness, and it's inhabitants are parochial enough they would drive Madame Bovary to excesses of adultery through boredom. But as I am an outsider the petty problems of an overweening leftist city government, the constant fear of closure at the steel mills and the summer oppression of extreme heat are incidentals to me. Perhaps they enhance my pleasure upon returning home to my small verdant island in the stream, where foreigners come and gawp and visitors can't stay away. 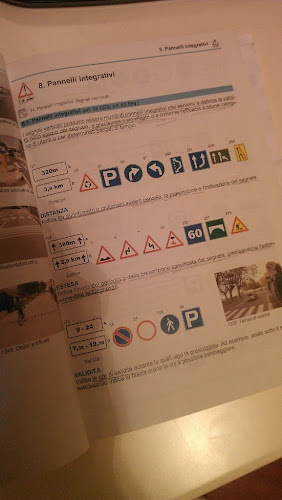 Parking is a useful skill in a town as crowded as this. 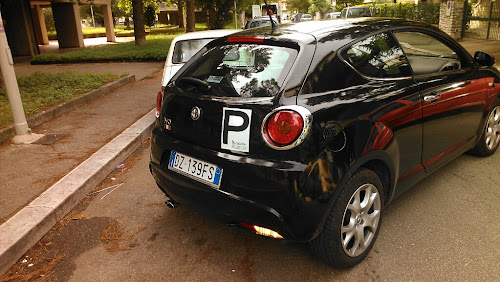 Gently, gently the impulsive 19 year old student backed her Alfa into the narrow spot. She never touched the little Fiat 126 though she came close a couple of times. 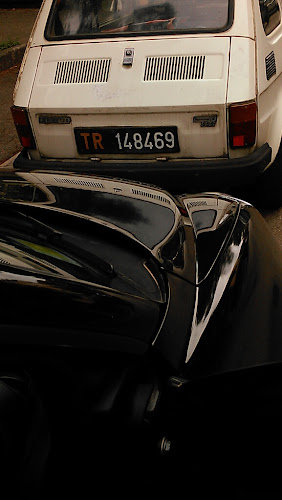 Roads are torn up, orange cones are enough to cause a learner a few headaches. she handled them. She's been riding a Vespa 125 around town for a couple of years so these things must seem natural to her. The state of the streets makes Key West streets look as smooth as billiard tables. 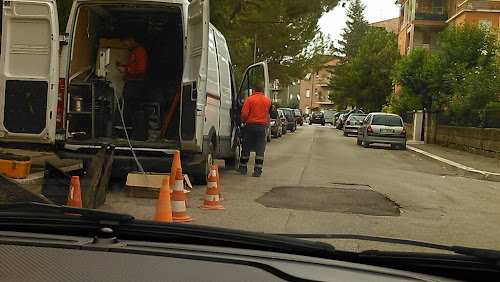 A little highway work to show she can merge with traffic, making me long for wide open spaces even as we turn around and go back into the concrete jungle. 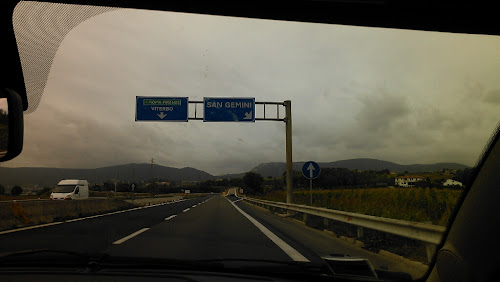 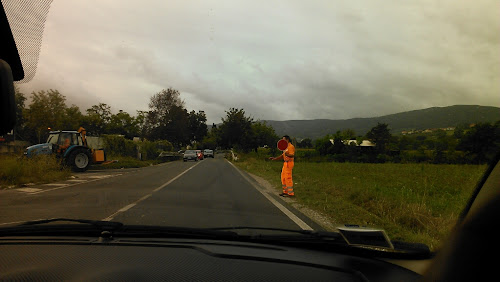 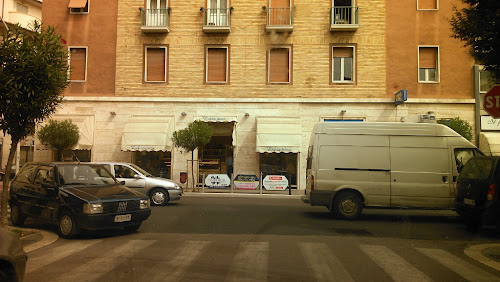 And my favorite moment of the afternoon as we planned to turn right onto the main strip Via Cesare Battisti and we pulled up to the intersection. My pupil banged her head on the wheel. The green Fiat Panda on the left was parked, as in no driver anywhere, right on the street corner. The white van on the right was double parked and overlapping the side street. "Can I turn left?" she asked, we can do this I said. We did too but it wasn't easy. 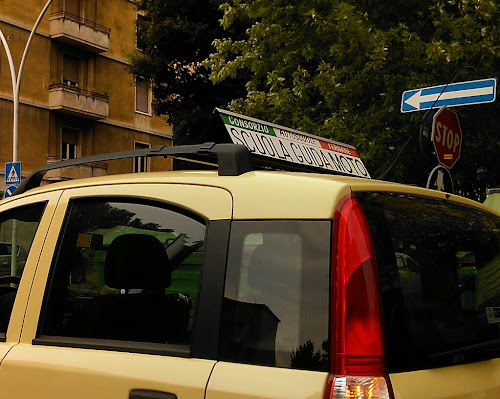 I cannot imagine making a living doing this.