It became an orange spot off the coast of Africa, denoting a reasonable chance of storm formation, and now Tropical Storm Dorian, as the spot is formally known, is headed toward the northeast corner of the Caribbean...but massive development is not yet on the cards, they tell us. Some forecasters think Dorian may weaken irretrievably from its current 50mph spinning speed but the National Hurricane Center in Miami isn't so sure about that. At the moment its far too far away to know anything much but next week things will be clearer. I'd like a quick bout of rain to save me watering and a return to hot sun and blue skies, thank you.

As  of Saturday morning the National Hurricane Center indicated the storm is  dissipating and should soon turn back inot  a tropical wave of wind and rain of manageable proportions. Good news all round.
Posted by Conchscooter at 8:33 PM No comments:

This arcade marks the bottom of La Concha, the hotel that has a bar on the roof called The Top, which the Spottswood family has decided to demolish. I guess thirty years is a good run and up next is a beauty salon with a view. Ugh! 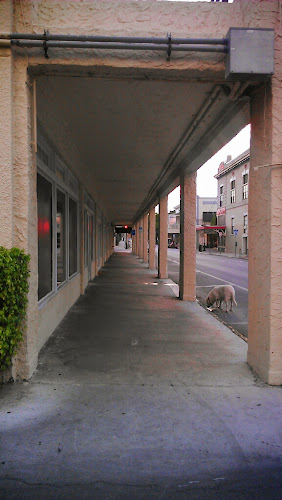 This little shop on Fleming Street reminds me of one of those odd islands that set up headquarters for companies looking for an offshore address. This isn't Grand Turk or Bermuda, but there sure are a lot of nameplates on building the size of a bike shed. Keepin' busy. 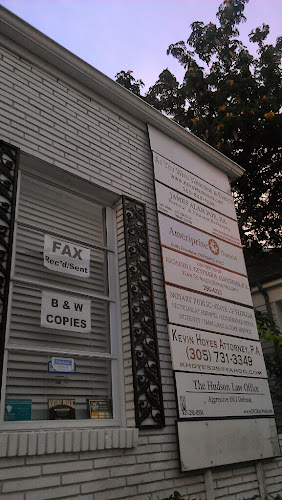 Fast Buck Freddie's is still showing signs of its former life as the city's eccentric department store. The owner says he has refused offers from a drug store chain. Tony Falcone says he wants something suitable in his building. 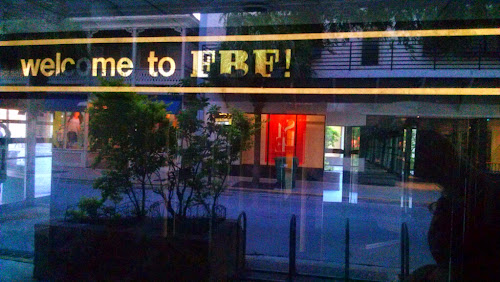 The city had received a proposal to make the five and six hundred blocks of Duval into a pedestrian zone weekend evenings, as an experiment. A funny thing happened at that point. The business owners in the neighboring blocks protested saying the pedestrian zone would be too successful and draw away their customers. Thus instead of expanding the pedestrian zone in act worthy of The Twilight Zone the city leaders decided to shut down the whole idea. Wanna walk Duval in peace? Gotta be there early with me and Cheyenne... 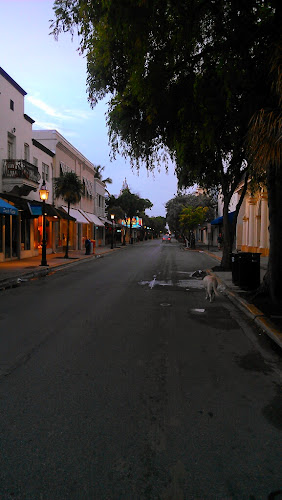 The San Carlos used to be the Cuban Consulate and technically belongs to the Cuban government but the unpleasantness between the US and Cuba has rather shredded that relationship, so Cubans in South Florida operate this rather stylish theater. Now apparently with some new program with the local Community College. 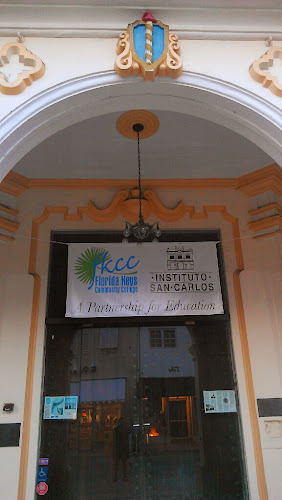 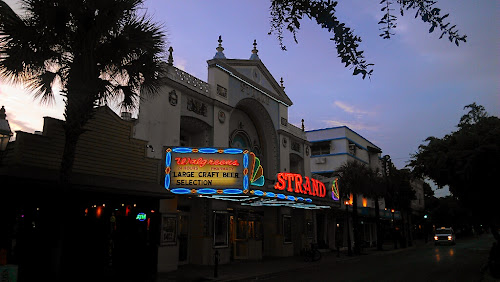 You know how people extoll the wooden architecture in Old Town? Some of it isn't wood. 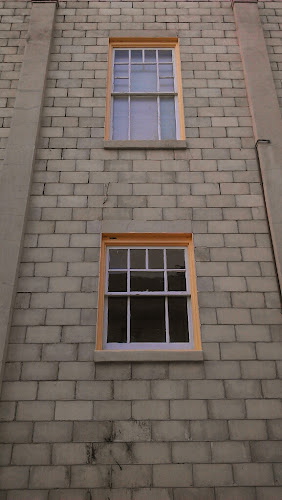 I published the essay on the ELF electric trike with this sort of barn door in mind, parked on narrow Appelrouth Lane. 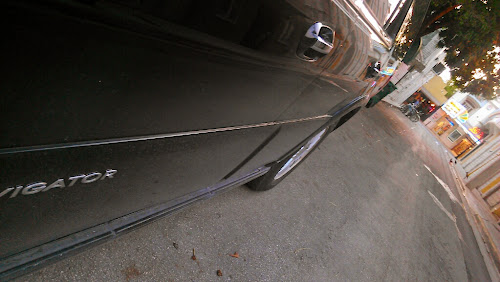 Keeping with the theme of limited space... No room for trash! 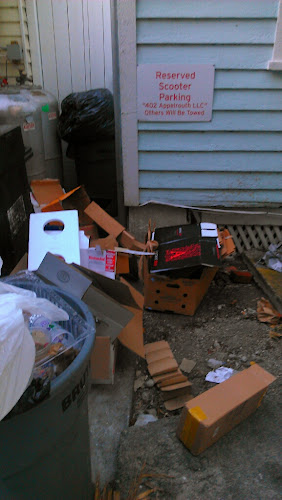 Personal dust catchers! Whatever next? There is no end to the business ideas. 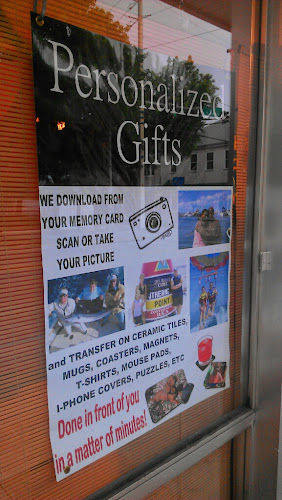 This is a good one from the Green Parrot Bar. I'm trying to imagine all those patrons trying to remember to separate the food from the containers...one day it will be second nature for all of us. 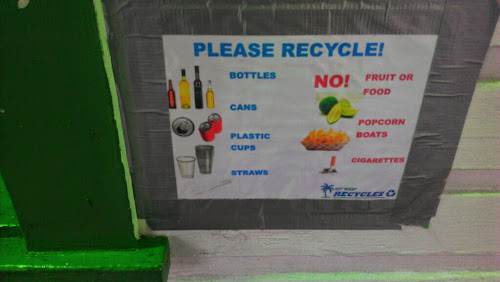 And then there were bucket lists. One hundred ways to have a Real Florida Keys Experience. Hmm, and you need a guide book to do that?  David Sloan wrote the quit your job and move book of similar design. I quite enjoyed that so perhaps this bucket list fad needs a look see.
﻿ 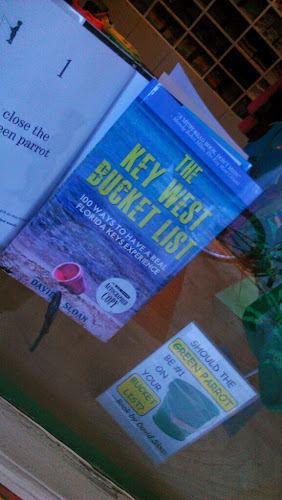 Why visit when you can explore? Step beyond the guidebooks and transform your time in Key West and the Florida Keys into a true adventure filled with purpose meaning and accomplishment.

~Invent your own tropical drink.
~Search for sea glass.
~Make a Key lime pie.
~Watch a meteor shower from sea.

Lifetime residents and casual visitors alike are guaranteed to find hidden gems in The Key West Bucket List that take you beyond the island's glossy façade , up close with the people and deep into the heart and soul of the Florida Keys.

Thousands of interviews with hundreds of residents over more than a decade have culminated in the ultimate list. Concise, honest, and carefully crafted, The Key West Bucket List is guaranteed to show you the time of your life.

(Please note that this book is a list of 100 ways to have a real Florida Keys experience. Each item is accompanied by a quote. The book is not rich in text or flowery descriptions. It is a concise list, filled with adventures that will not waste your time.)


I really need to ponder that idea of interviewing thousands of people to find  out what constitutes a Real Key West Experience. I'd have thought being in the Keys would have started that ball rolling, everything else just follows on. I have no propensity for sales and hyperbole. There again I have absolutely no clue what hookah tobacco is, and the idea of smoking like a Turk does nothing for me. 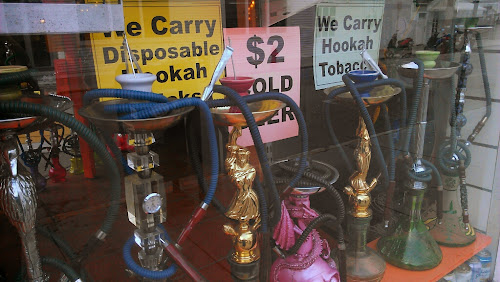 The true story of why I wear pink size 13 Crocs is that many years ago I bought some convenient plastic shoes in a dark blue color at a boat show. The idea was to be able to toss them in the dinghy and not mind if they got wet or sandy. My Birkenstocks were martyrs to salt water. One day my wife asked me if I wanted a new pair as she was going to the Big Pine flea market and she knew they sold them there. Sure I said, too busy with some improbable project to descend from Mt Olympus myself. What color would you like she asked me, intent on my manliness. I don't care I said and I stuck to that line when she came home with a pair in pink and asked if I would rather she exchange them. Don't care I said and then I discovered two wonderful things. 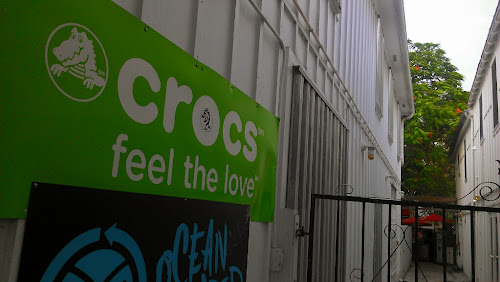 One is that straight men are afraid of pink footwear and another seems to be (though I can't be sure) that most gay men think they are too ugly. The result is Crocs retailers will sell you a pair of extra large pink Crocs for half price just to be rid of the wretched things. That would be an excellent result on its own but then I discovered that mere  mortals think there is something wrong with a man padding around in pink Crocs. Result! It takes a stout hearted human to approach a stranger in pink rubber footwear so I tend to get left alone. My cup runneth over and I remain in debt to my wife a decade after she pushed this fashion faux pas into my life, a life not much concerned with fashion till then. 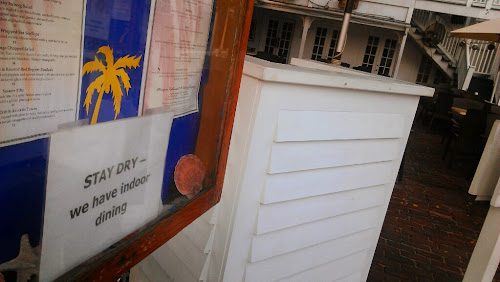 Mangoes on Duval was drumming up business above during the recent period of heavy rain trying to entice punters beyond it's formerly enticing deck area while below the gross t-shirt and dust catcher emporium is expressing a widely held desire. Often these dens of stupid puns put signs in their windows announcing they are going out for business as though shoppers will be induced to come running to seek bargains on t-shirts advertising sexual prowess and flatulence (frequently on the same shirt). 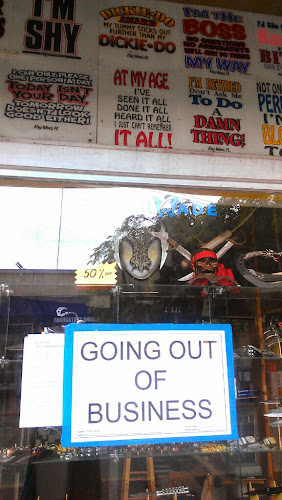 This architecturally intriguing building overlooking Duval has come back to life after a stretch as former cheap seafood place. Now apparently it's  back as Pinchers which I Googled on a whim and it turns out it has nine locations in southwest Florida and now also on Duval "You can't fake fresh" they say; I say oh yes you can all too easily apparently. I feel no need to check out how fresh this place is as  long as Hogfish is open. 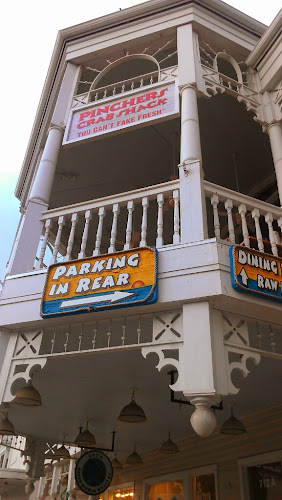 A  fresh start, a new day and soon the sidewalk will be filled with people anxious to shop. Long may they keep showing up. 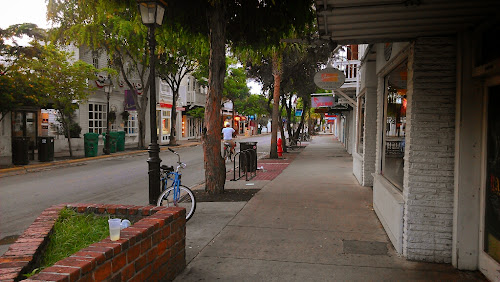