My wife wanted to eat trout. Yes, I know, we're in Western North Carolina for a week, out of tourist season and the crazy Florida woman can't go a week without a dead fish on her plate. So we went to Bubba's in Burnsville. 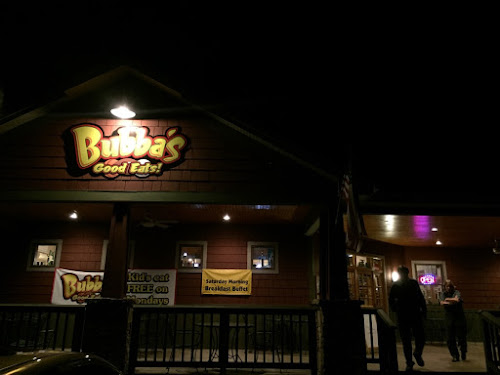 Geeta has eased off her vegan trajectory a bit, thanks perhaps to the wisdom and tolerance of age, or the recognition that woman does not live by lentils alone or maybe she simply missed the flavor of eggs and fish. She likes to cook and she and her husband are the most extraordinary left-over hoarders you have ever met, so eating out is a special event. 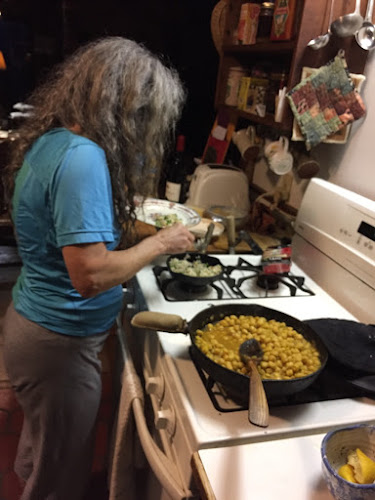 These family consultations are not for me. I spend most of my time at Celo with my brain switched off so when a plan is hatched I am not terribly aware. Put a glass of wine in front of me and I drink it. Decide to eat out and I go. Otherwise I read my Kindle on my phone, take pictures and let the neighborhood tales of increasing age, ill health and social dissolution flow round me like a buffalo stampede around a rock in the prairie. 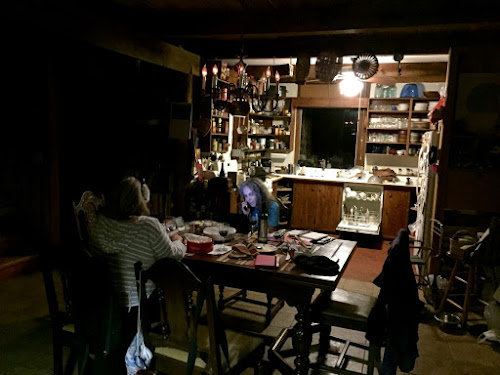 These days the Ingles grocery store ("American Owned") in Burnsville is a foodie Mecca, with shelves groaning under the weight of products designed to appeal to visitors (Carrs Water Biscuits) and more prosaic local tastes (Little Debbie's). When Geeta and Bob moved here in 1974 my wife used to bring suit cases filled with avocados, artichokes, tortillas and salsas from the sophisticated land of eternal youth in California. This is no longer the case; we now go sauce and mustard shopping in Burnsville to see what we cannot buy in Key West. 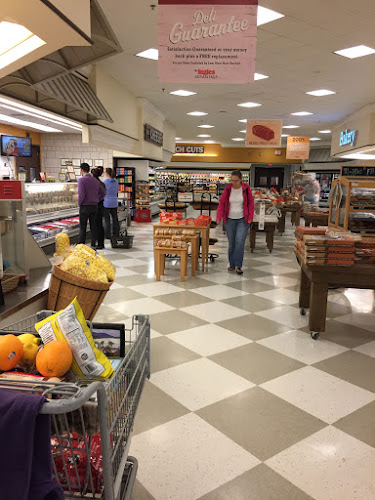 The other reason not to eat out is the drive. I find it a pleasant twenty minute wander through the woods from Celo to Burnsville. They see it as a waste of a valuable natural resource - petroleum - and a contribution to the scourge of climate change. Yes well, true enough but sometimes a man needs meat, which also contributes ...blah...blah...blah. 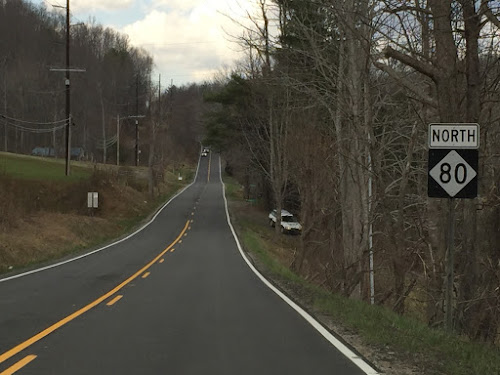 Burnsville is a pretty little mountain town of 1700 souls previously photographed on this page. But it is still pretty and worth wandering through: 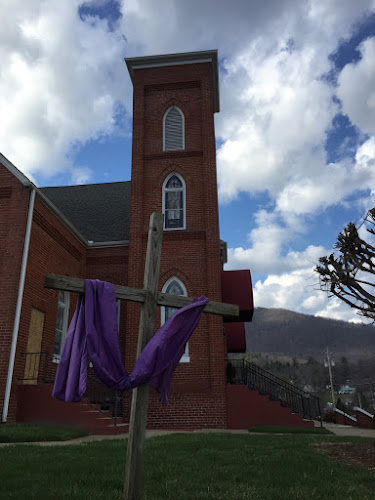 Not much changes here, which is reassuring. The thrift shop... 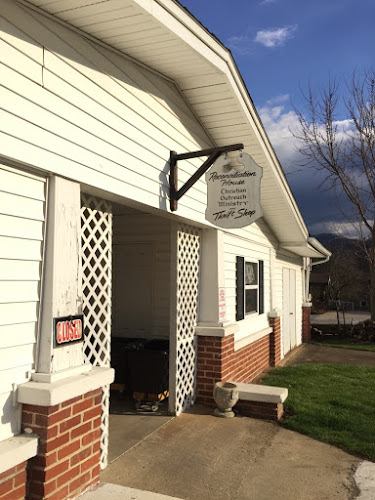 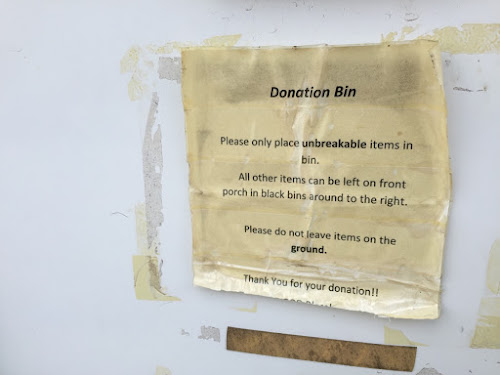 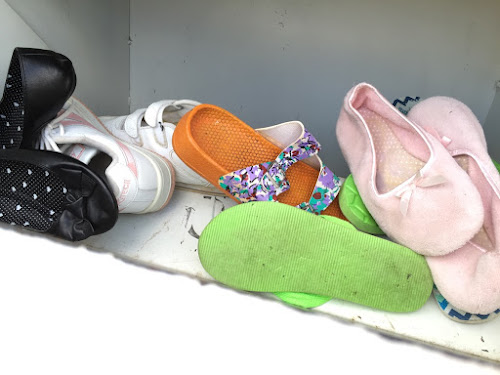 The doctor with the funny name, if smoking can be a jocular matter these days: 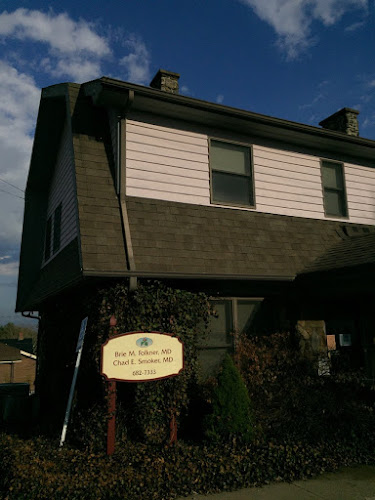 Heavy padlocks on the front door of the abandoned picturesque building, with an open window frame on the other side. Who are they kidding? 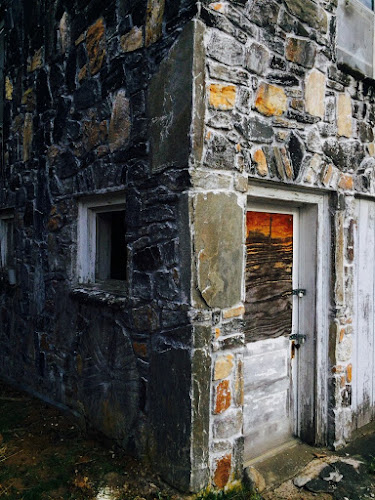 The yellow brick road mural is still in place... 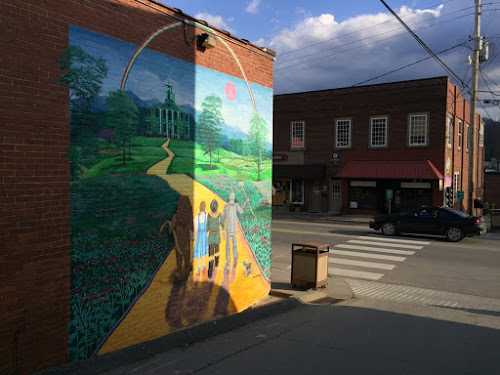 ...as is the 19th century courthouse depicted on the painting: 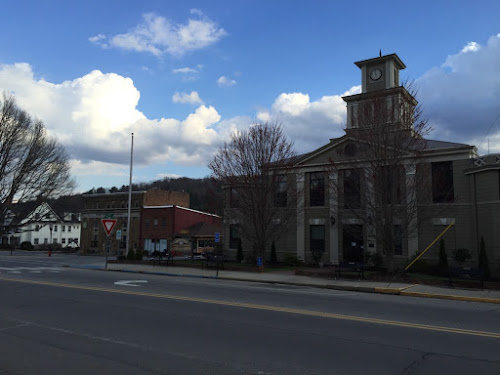 These days dogs no longer appear to be banned from the park. How civilized! I have ambitions to one day stay at the Inn in the background. Not easy to do when you have a family living close by. 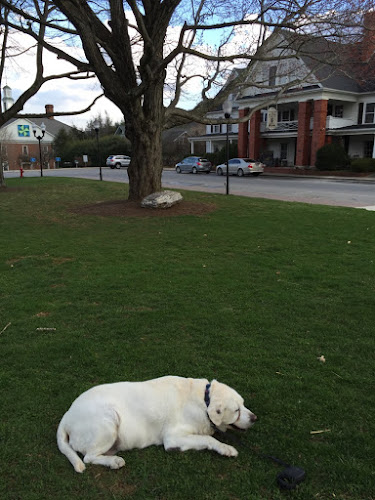 Bob drove us to dinner. His wife always drives like a maniac possessed by a desire for self immolation at impossibly high speeds on these narrow winding roads. Bob just grips the wheel looking like he's gone mad with an unaccountable lust for speed. He actually drives at normal speeds, not his wife's hair-on-fire style of motoring. 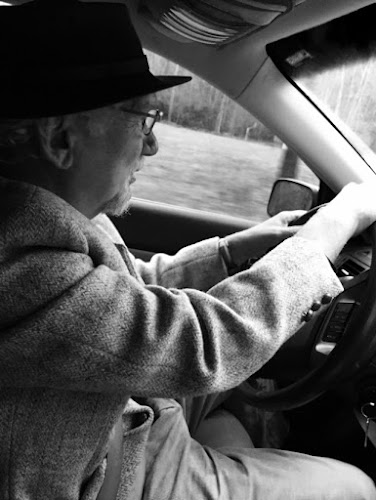 Oddly enough my in laws had never been to Bubba's. 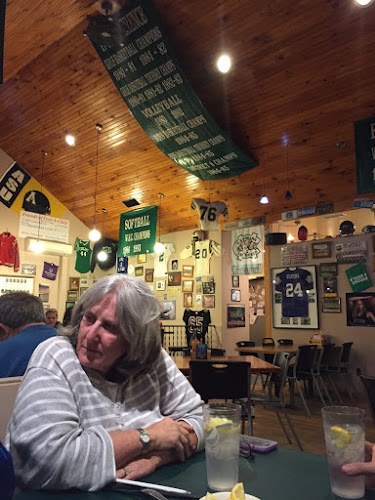 They were like aliens on another planet wandering around looking at the school sports paraphernalia as though it were evidence of aberrant voting behavior. "This is a den of Republicans," Bob pronounced in the gravest possible way as though he had discovered listeria in the kitchen. I figured it was just middle America in Appalachia as you might expect and I figured the burgers would be delicious. Bob makes me look middle of the road sometimes. A bit of a relief really as being the household radical all the time gets a bit tiresome. 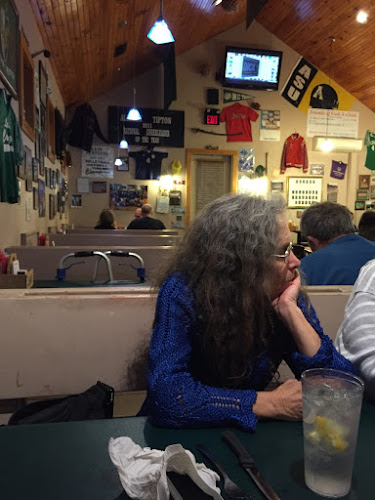 Gwinnie took our order after establishing her genealogy and local bona fides with our hosts at dinner. That took a while as she explained who her father was and where she grew up etc etc...then she asked me where I was from and I just said Italy to cut the long story of my tangled genealogy very short. Not at all put out she told me her impressions of Venice and Verona before taking our order. "I just love Europe," she said thoughtfully giving the worldly world travelers at our table pause. Modern hicks are hard to stereotype. 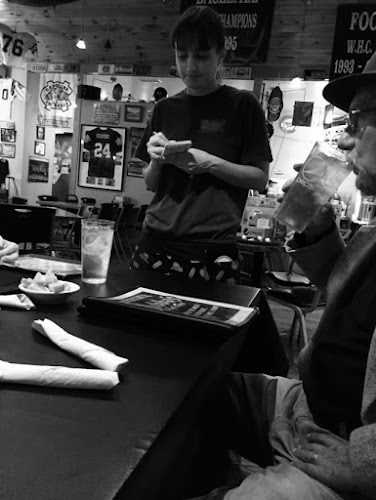 The young trim woman shocked Bob again when she listed the schools her four children attended locally, but she made me very happy by keeping my coffee cup filled. The perfect waitress. I very much enjoy coffee and hamburger. Why that combination? I dunno I just do, and I don't like strong battery acid coffee: hot weak and not bitter is perfect for me. My BBQ-bacon-cheeseburger was the ideal meal alongside my bottomless cup of coffee. And the real potato fries were excellent. 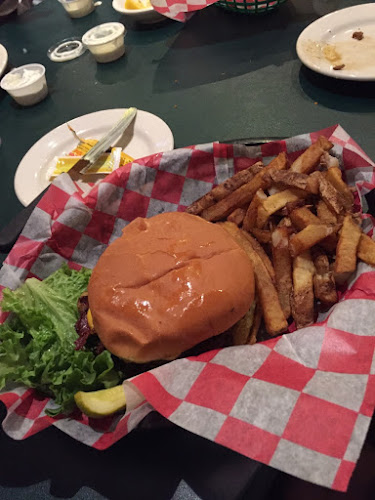 Everyone else had trout, the biggest slabs of grilled fish you ever did see. Bully for them. 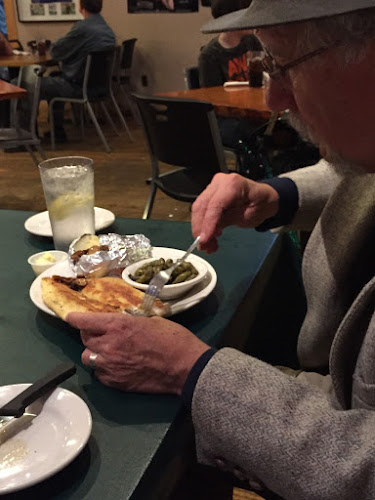 Then, just as the blackberry cobbler arrived so did a visitor, a middle aged man once attended by my sister-in-law when he was sixteen. That visit engendered another genealogical recitation of local who's who, rather in the manner of a prolonged Biblical generational listing of who begat whom, but I couldn't the wait. The vanilla ice cream was melting and the gooey pudding resulting was too much temptation. While the others were distracted with the history of prominent Burnsville residents past and present I got on with the grave responsibility of demolishing the pudding. 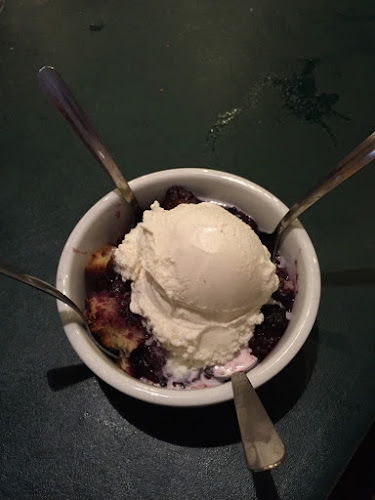 Geeta started waxing nostalgic about her years as a small town general practitioner and how perhaps she should have stuck at it. Which sounded doubtful to me as she has traveled the world practicing medicine in the Himalayas for years and more recently in Kenya and last winter she went on a Quaker mission to Mexico. Which leaves little time to fulfill the romantic notion of small town medicine in one small place. 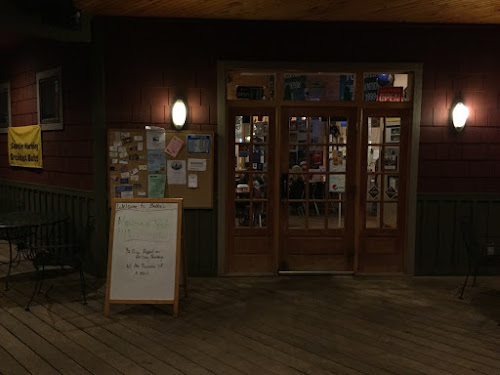 We returned to downtown Burnsville to walk off the dinner and while Cheyenne tried to demolish a small hedge hunting for escaped slices of day old pizza an oblivious Bob told me the story of the Kenyan Quaker pastor (I had no idea such a thing existed) who took his first look through a telescope in the Burnsville town square. It seems he was less impressed by Mars than he was by the sight of the mountains of the Moon. 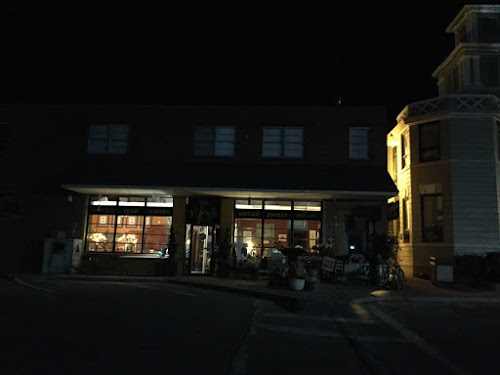 And so home and to bed. Cheyenne loves her Celo bed so much we will get her one such for her Cudjoe Key home. Apparently this lumpy thing is more Labrador friendly than her closed foam mattress in Florida. 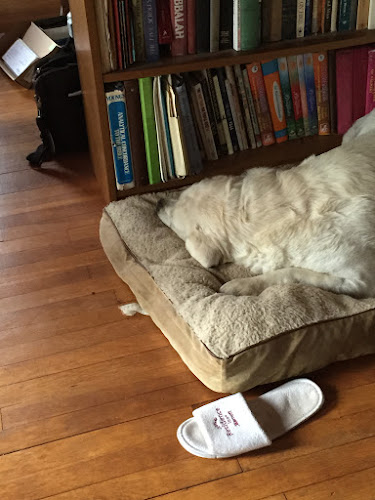 What Cheyenne wants, she gets. I got a great burger and cobbler and coffee and I love Bubba's. I will be back no matter what Bob divine's of their politics. They are demon cooks and that's what matters.