I like to travel. And if that weren't enough I have traveled throughout my life as much and as often as I was able. I have ridden motorcycles (and scooters) driven cars, ridden railways and sailed. For years I have cursed my itchy feet and my innate desire to see what's over the horizon. But as I age I value the memories, they give me a chance to travel while I am stationary, and they are even more valuable now that I have a place where I do like to live. The itch is abating at last. Which is not to say I don't want to travel, but I do know where home is, as long as I can hang onto my place in these lumps of rock called the Florida Keys. 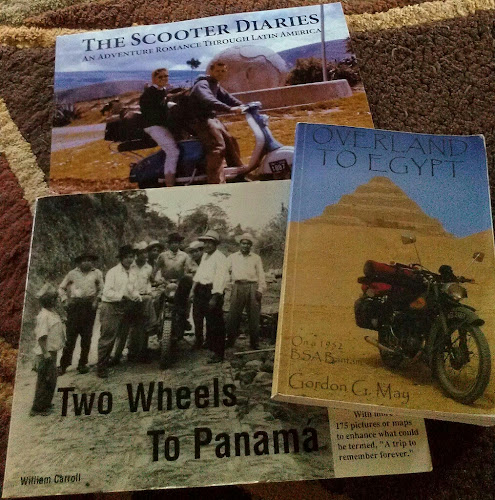 There are those good people who tell me frequently that they would like travel but...There are so many obstacles to travel, but the biggest is usually in people's heads. When I hear that someone wants to go to England I point out, unhelpfully, that planes leave Miami each afternoon and they get people to London in time for breakfast tomorrow. They shy away, as though I had suggested they commit some unspeakable stupidity and set themselves among bandits in a far foreign land. Grilled tomatoes and greasy fried bread and kippers for breakfast ten hours away frightens one raised to think of potatoes and pancakes as breakfast food. Food is the essence of travel as an explicator of culture, for me. I have eaten camel in the desert, and boiled potatoes in Siberia and some very odd breakfast food on the streets of Yokohama. I remember drinking Guinness alongside the highway in Africa, taking a break from riding in the awful heat and talking about travel with men who lived in mud huts in a part of the world today torn by civil war, Muslims versus Christians inNorthern Nigeria.

But these are other people's stories: 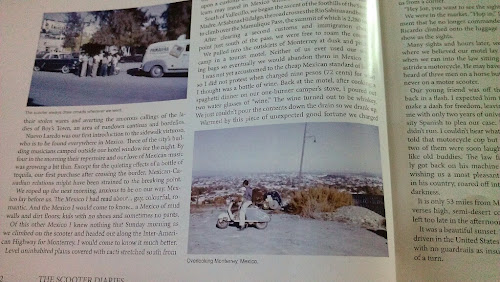 I find it odd that a man who chose to ride a Lambretta 150 from Ontario to Peru did not have the digestion capable of coping with spicy Mexican food. And because he had no Spanish I wondered how much of this alien culture he could absorb on his remarkable scooter ride half a century ago. Give him credit, he does get around! And get this: he asked a woman he had first met six weeks prior to fly down to Mexico City, marry him and carry on riding the Lambretta. I have reached the bit where Tove says "Yes!" 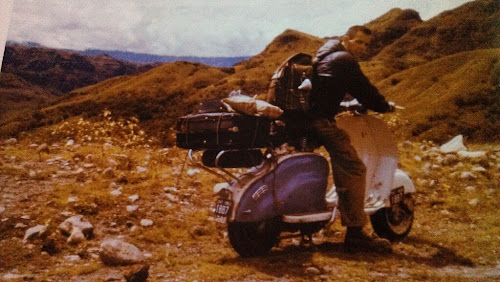 The astonishing thing is this madcap adventure seems to have worked for them as they stayed married until he died a decade ago. She is still alive but the production of this book is a story unto itself, a labor of love by their son. THE SCOOTER DIARIES is a beautifully written manuscript authored by Ron Bowman after the trip yet never published. Thus it was up to his son Gordon to prepare it for us to read. The Canadian journalist on a scooter tells an amazing story of a ride unimaginable to people who expect to be cosseted every minute of every day whether they are on the road or at home. These two had a blast and so will you if you read this delightful travel story. They wore street clothes...no "proper gear!" 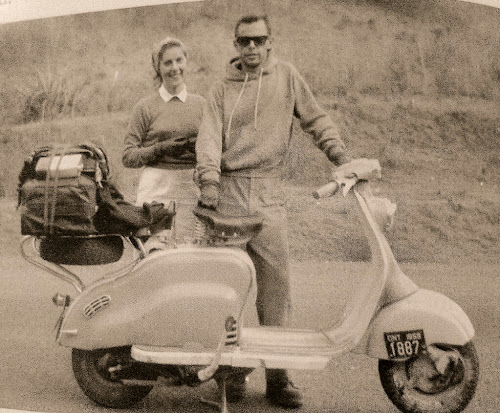 The other traveler's tale I throughly enjoyed was also set in Central America by another journalist, an American who went bust, mortgaged his home and bought a BSA to ride to Panama by himself, dressed in coveralls and a cloth cap. 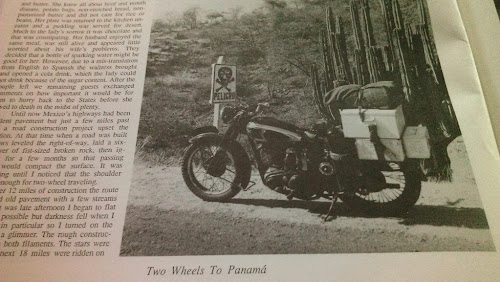 It's obvious there's more to this story than meets the eye, but Two Wheels to Panama is a delightful travel story. Carroll has a tremendous sense of humor and an eye for the ironic so you can rest assured this an easy read. 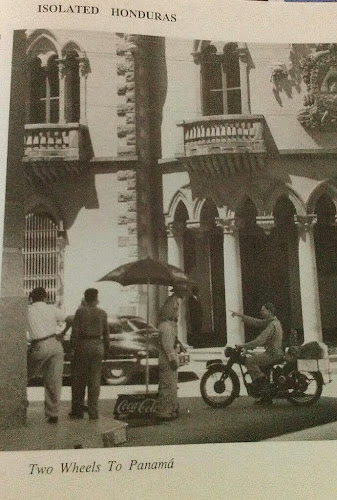 The Central American roads were a nightmare but William Carroll fights the good fight cheerfully and always within sight of his camera lense. To earn some money he files reports with papers back home about stuff he sees and assignments he's given, which in turn give us eyewitness stories about United Fruit that belong in the history books. The Pan-American Highway in Costa Rica was a series of river crossings that tested the BSA's electrics, and the capacity of his boots to hold water: 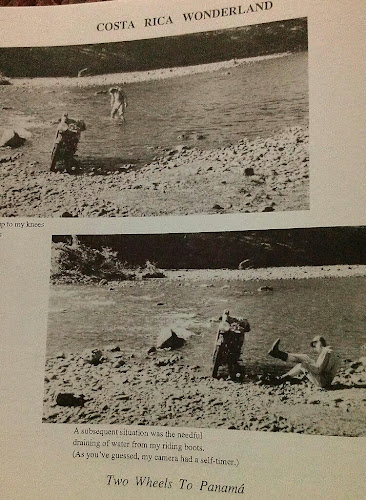 This next book, like the first listed has to be ordered from the author, in this case a sensitive New Zealander living in England. His story Overland To Egypt is a ride on a 1952 175cc Bantam overloaded and hard pressed to keep going in the heat of the Middle East. I am a huge fan of vintage Vespas but from reading this story the BSA Bantam was a nightmare to keep on the road. With a top speed of 45mph it's not going anywhere fast but with stops every five miles in the worst of the heat you are amazed by the author's great good will all the time. 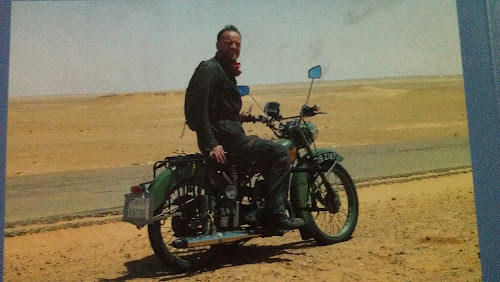 This story reminded me of Jupiter's Travels inasmuch as the author just loves people. Again we have a fussy eater and a man with no facility for languages but he travels slowly through countries that have since gone up in smoke and has a whale of a time. In his epilogue he briefly mentions the Arab Spring uprisings and notes that ordinary people in those countries he rode through seemed to be living happy enough lives before War came to the land. I of course wish he had expanded on that theme as I have long held to similar theories from my own travels. But what he gives us is a delight. 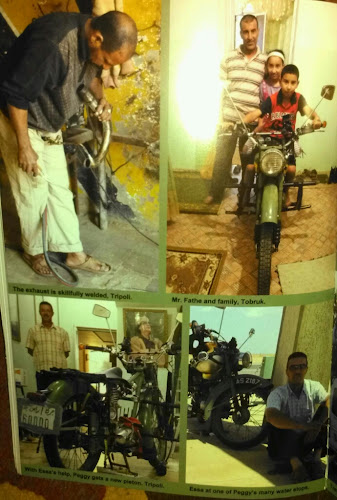 This is a travel story of the best sort with an annoyingly incompetent motorcycle which he uses to get him closer to people along the way. He needs help all the time and he gets it proving what we travelers already know: you are never alone on the road.

In closing I found an old book mark in one of my books, from a trip to New Mexico, a postcard of Georgia O'Keefe on the pillion of a motorcycle. For me it expresses joy and freedom and unlikely adventure: 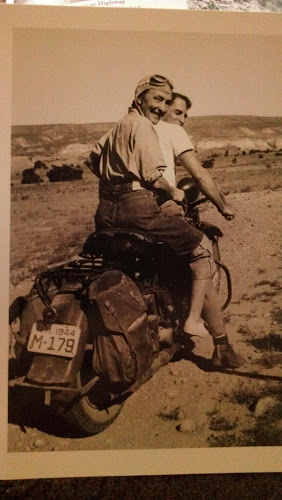 If you really have to travel you will. May it be on two wheels if you can, some other way if you can't. But if you don't want to, or cannot travel, voyage in your armchair with these great stories, not about motorcycles, but about fascinating people.