On Forks And Pasta

I have been reading a rather startling book discussing life, food, politics and history in Sicily. I have a feeling that anyone not having some meager amount of knowledge of Italy in the latter half of the 20th century would get lost in a  torrent of names places, political parties and bizarre rituals, alongside the more traditional murder and violence of the period and place.

However there are a few tidbits in this fascinating book that have gripped my imagination and won't let go. First it turns out the most plausible explnanation for the derivation of the term mafia is that it refers to an Arab term for  a powerful graceful young man - the sort of young fresh blood needed by ossified organizations like The Mob to carry out the leaders' bidding.

Then there is the matter of the fork which is mentioned even in the formal review of the book that I have reproduced below. The Australian Peter Robb gets the low down on the origins of pasta and forks in Western Society and his explanation as given to him by a Sicilian with some studies under his belt, is fascinating.

Robb suggests that the popular myth that Marco Polo brought pasta back from China be supplanted by a  new and better theory. He suggests fresh pasta has long been made in Sicily but the durum wheat pasta that can be dried packaged and shipped was developed by Arab merchants for transport around the Mediterranean. Plus he says the first recorded mention of someone eating with a fork was that of a Turkish Princess due to be married to a Venetian Prince. However plague struck and they both died. The Christian leaders of the time argued they were killed as a manifestation of God's disapproval of the fork, a Muslim invention and the Holy Roman Church outlawed the use of forks for centuries, leaving the faithful to eat pasta in the manner shown above. Not terribly appetizing.

By the way Marco Polo it is said discovered sago and camphor in Indonesia not pasta. So there, and I have read elsewhere that Polo probably did not exist and was an amalgamation of traveler's tales told variously to a Venetian scribe who created a coherent narrative we are pleased to call the Travels of Marco Polo. So there!
Talking about Sicily Cosa Nostra ("Our Thing") ends up becoming an object of some heavy discussion and as a resident of Italy in those years I find it fascinating how he ties together all the threads of Mafia, Politicans, The Vatican, Bankers and extraordianry acts of brutality by the the mob's killers- egged on it seems by the US after World War Two as a buttress against Italy's powerful Communist Party. The Fascists suppressed the Mafia in Sicily before the war and they fled to the US to escape so upon their return with the conquering army they set up again on the island and fought the Communists who wanted to rearrange Sicily for the peasants.

You have to give the Mafia credit for their utter lack of restraint and brutality. One preferred method of instilling terror, aside form gunning people down or hanging them and disappearing their bodies was sending messages like the form of torture called being "goat tied." The photo below is a representation by an artist, to not rupture your delicate sensibilities but you can find lots of pictures of bloated faces and protruding tongues of victims of this ghastly way to die. Essentially the victim strangled himself as his legs cramped and straightened out, thus choking himself to death. Nice folks. From Kirkus Review this discussion of the book. Frankly I found the book engrossing and I would have to say it left me with a sense of wonder and finally some sort of explanation for the bizarre public years of my young life in Italy. Things happened and we never seemed to get a clear explanation for them. Now at last I do!

If it's true, as the Sicilian writer Leonardo Sciascia once said, that Sicily is a metaphor for the modern world, then author Robb has plumbed the depths of the world. Midnight in Sicily is a work from another age and era. Perhaps only in the 18th and 19th centuries would a foreigner have attempted to write about art, food, history, travel, and the Mafia together. But it soon becomes apparent that in the hands of Robb the landscape of Sicily becomes a metaphor for its history; history is inextricably tied to food; food is inseparable from art. Again, it takes a foreigner to see Italy and Sicily in clearer terms than the Sicilians and Italians themselves. The heart of darkness in this tale is Giulio Andreotti, the most powerful politician in postwar Italy: seven-time prime minister and once hailed as the greatest political mind since Bismarck. Ironically, Andreotti is a Roman who sold his soul in Sicily in a Faustian bargain to secure a political power base from which to rule Italy practically undisturbed for decades. Robb, who has written for the Times Literary Supplement and the London Review of Books, masterfully recreates scenes as benevolent as friends enjoying a meal or as diabolical as Andreotti's meeting with the most brutal crime boss in all of Italy. There are shrewd insights (``Beyond a certain threshold, power erases embarrassment''); telling phrases (Andreotti, leader of the Christian Democrats, is called a ``sacristy rat''); and deep political/historical revelations (such as Cosa Nostra's permanent aim of eliminating the historic memory built up by those few who've understood that Cosa Nostra was a state within a state). A barbecue becomes an occasion for a learned excursus on the history of the fork. This narrative is itself an eclectic and sumptuous meal that- -through no fault of the author's--leaves the diner with a bitter taste in the mouth.

While it's true there is an astonishing trail of death and corruption in this book I have to say the historical asides, the discussion of the book The Leopard a historical novel about Sicily high on my list of most enjoyed books, all add up to to an engrossing read. 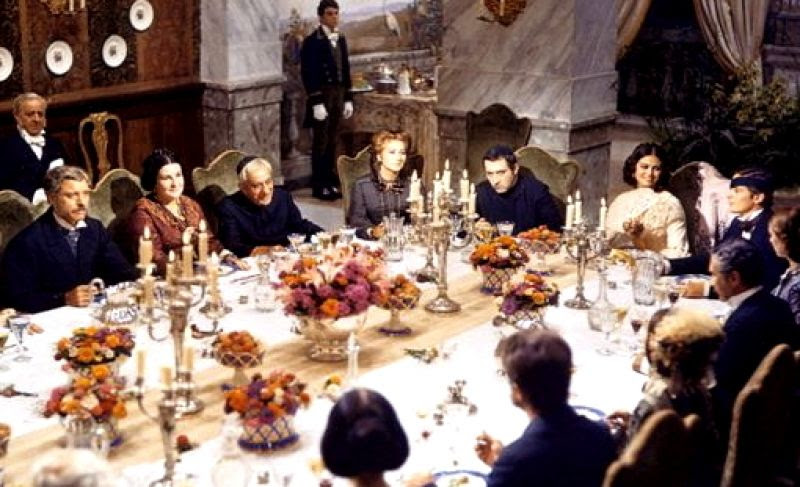 I can't recommend this arcane story about a province off most people's radar but I was prompted to bring it up because of our modern obsession with demonizing Islam. I have enjoyed thinking about what we would look like were we to get rid of three great inventions from the much maligned part of the world about which we know next to nothing: Pasta and forks, numbers and the decimal point and astronomy as we know it today.