It puzzles me sometimes to think how distant we are from basic stuff like agriculture. Homestead and all its fields and farms lies perhaps 130 miles from where this picture was taken at Higgs Beach, but for a child living in Key West a  tractor, if they are up early enough to observe this scene is a machine designed to clean a beach, not sow  a crop.﻿ 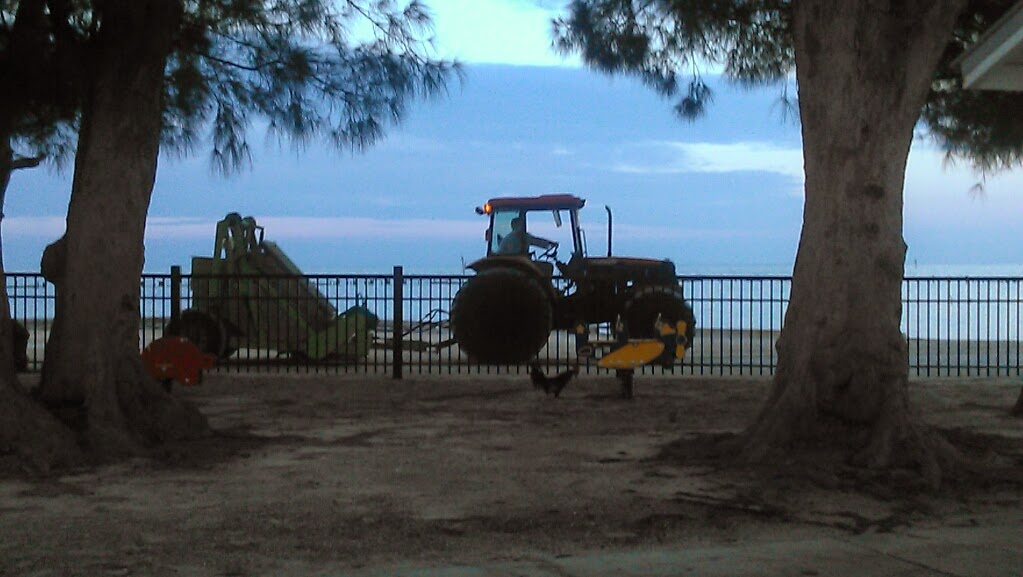 If you want to smell fresh mown hay, or watch birds chasing seeds dropped into a ploughed field, or watch dust billow up from the threshing of a com bine harvester, you have  to go a long way from here. This is  a place where suntan lotion grows on trees, metaphorically speaking and  cocnuts threaten to brain sunbathers if the nuts are left to grow and mature in peace. 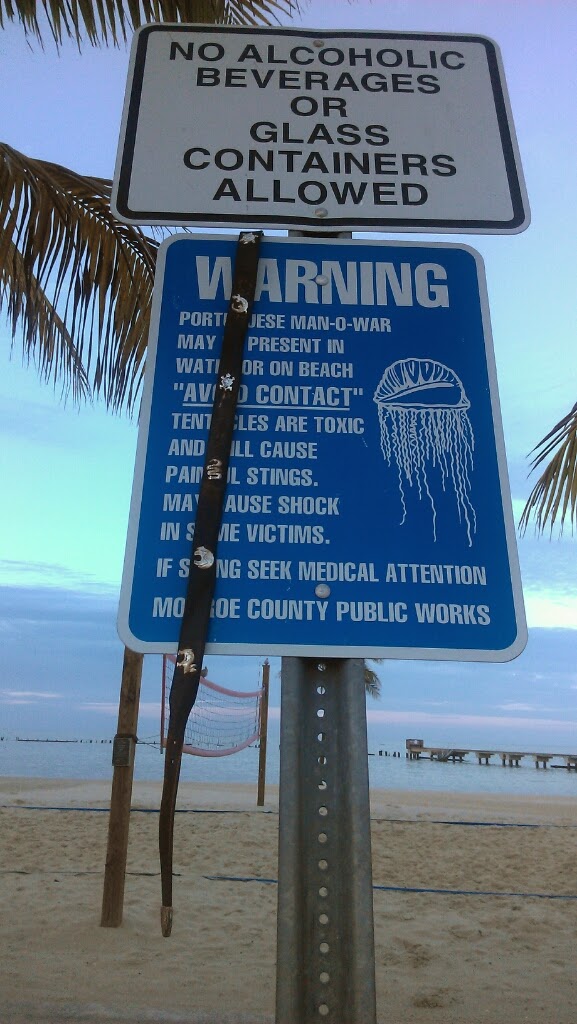 They may ban alcoholic "beverages" -quaint word!-  but that doesn't mean they don't find their way to public spaces and their presence may also explain the presence of a belt, necessary clothing sometimes which was left behind inconveniently in this public place. Some other kind soul apparently felt moved to hang it in plain sight perhaps to help the owner to recover it with it's gaudy decorative motif. I just took the picture. 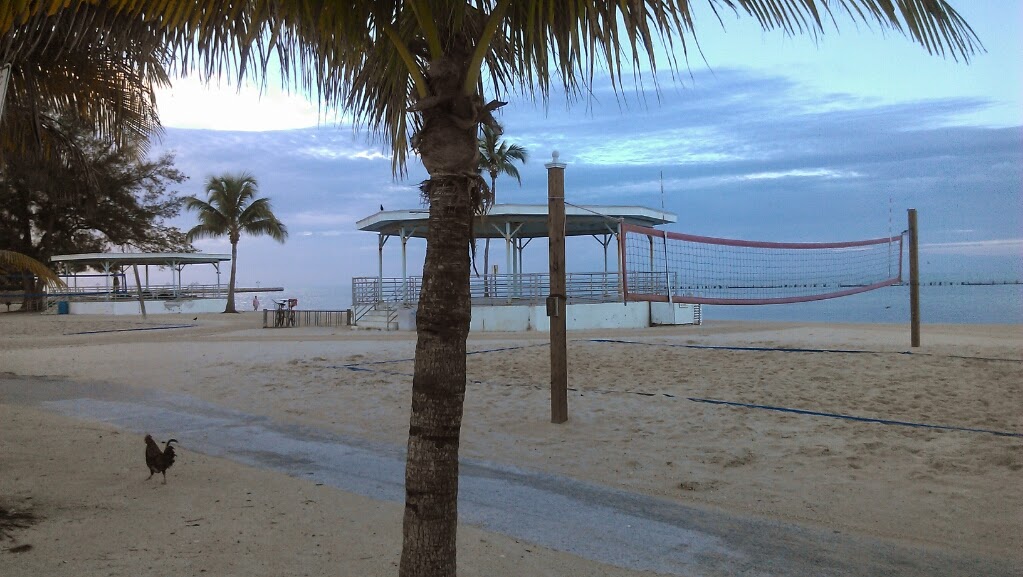 The road through Higgs beach has been considered for removal over the past few years. Planners want to move it away from the waterfront and open up this area, currently limited suppposedly to 15mph, to beach goers. Moving the roadway would crunch the dog park and predictably that has made the planners no friends. So far, no change... 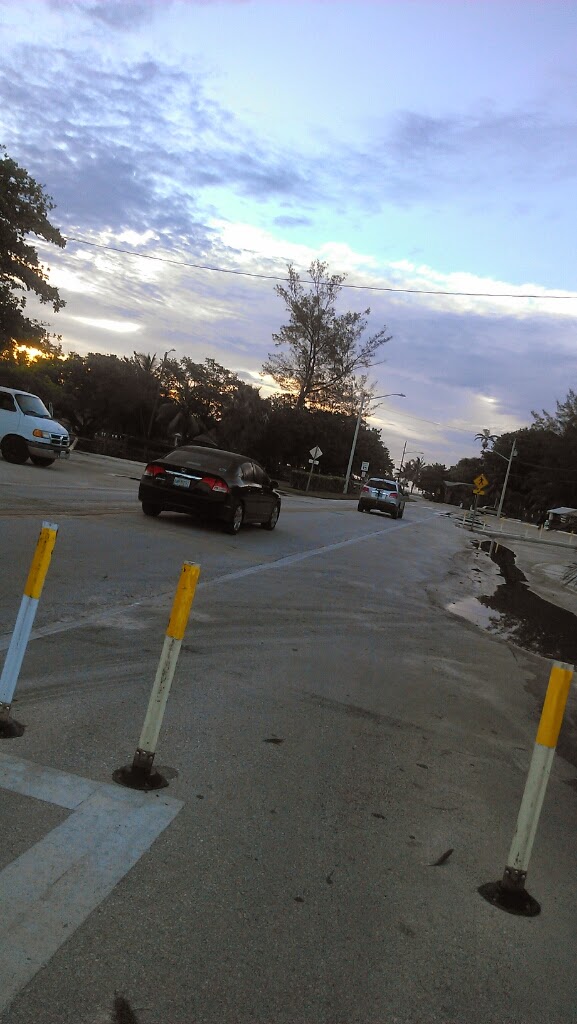 Higgs Beach is a county park in the middle of the city and they have introduced opretty new signage to the park. However n ot everyone notices: 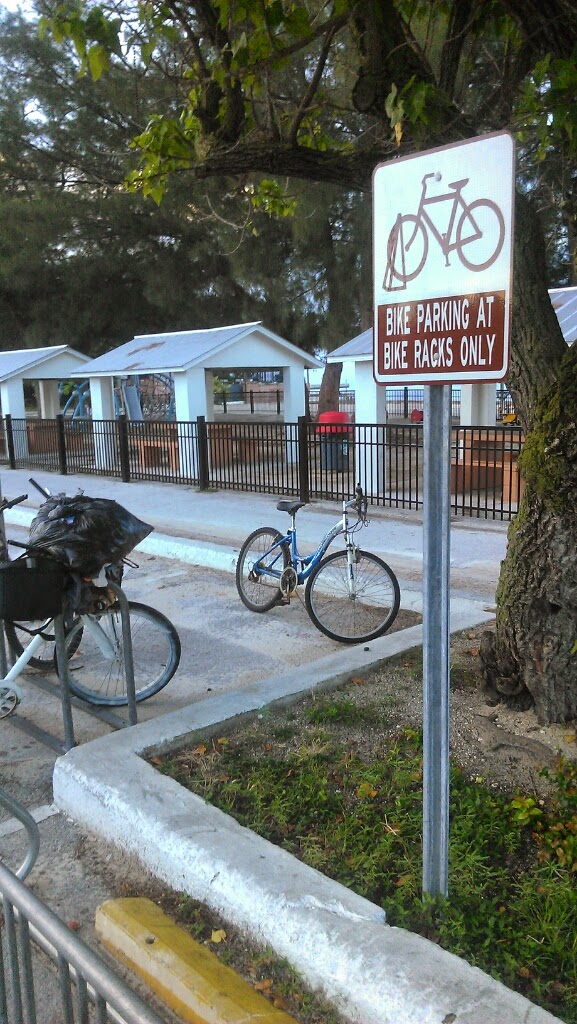 Cheyenne keeps her head down and from  time to time scores a hit. Bait fish is like mother's milk to this hunter: 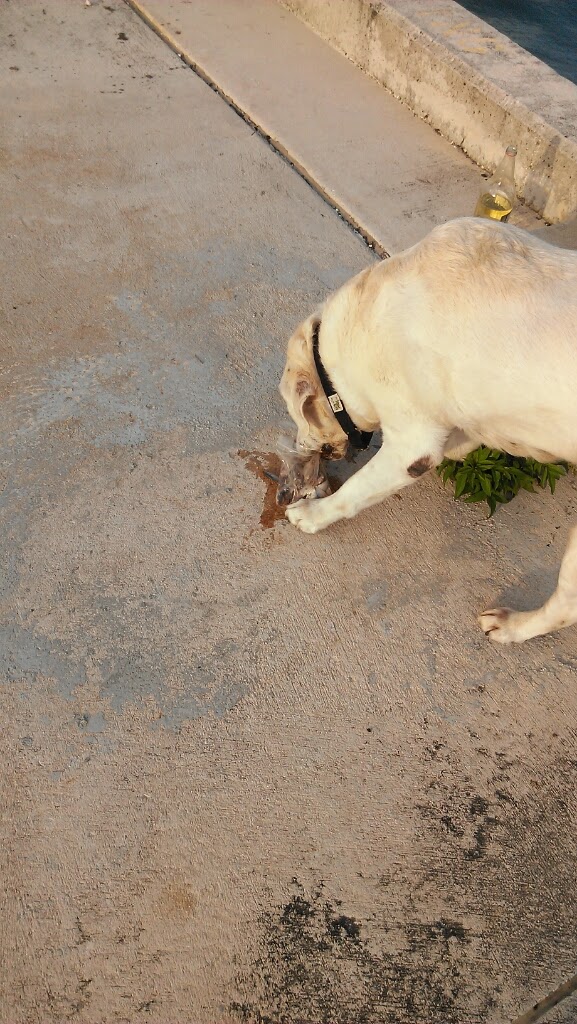 I tend to think of squads of unsmiling joggers and power walkers in electric bright clothing as a winter phenomenon in this laid back  drinking town with a tourist problem, as they say. I am a little too depenedent on outdated stereotypes I guess. This need to march in public is year round in these public parts: 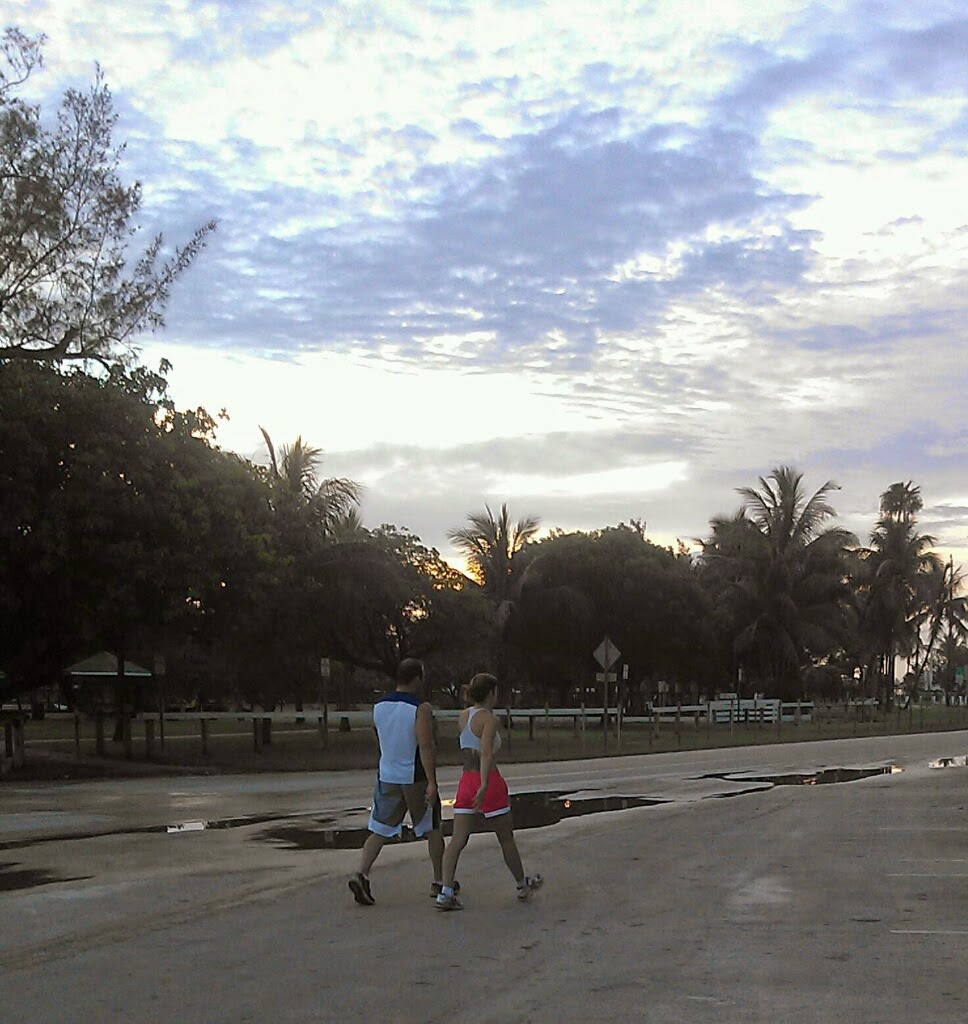 My belief that certain ungainly human activities are best kept to the darker and more private spaces in our lives is not universally shared. 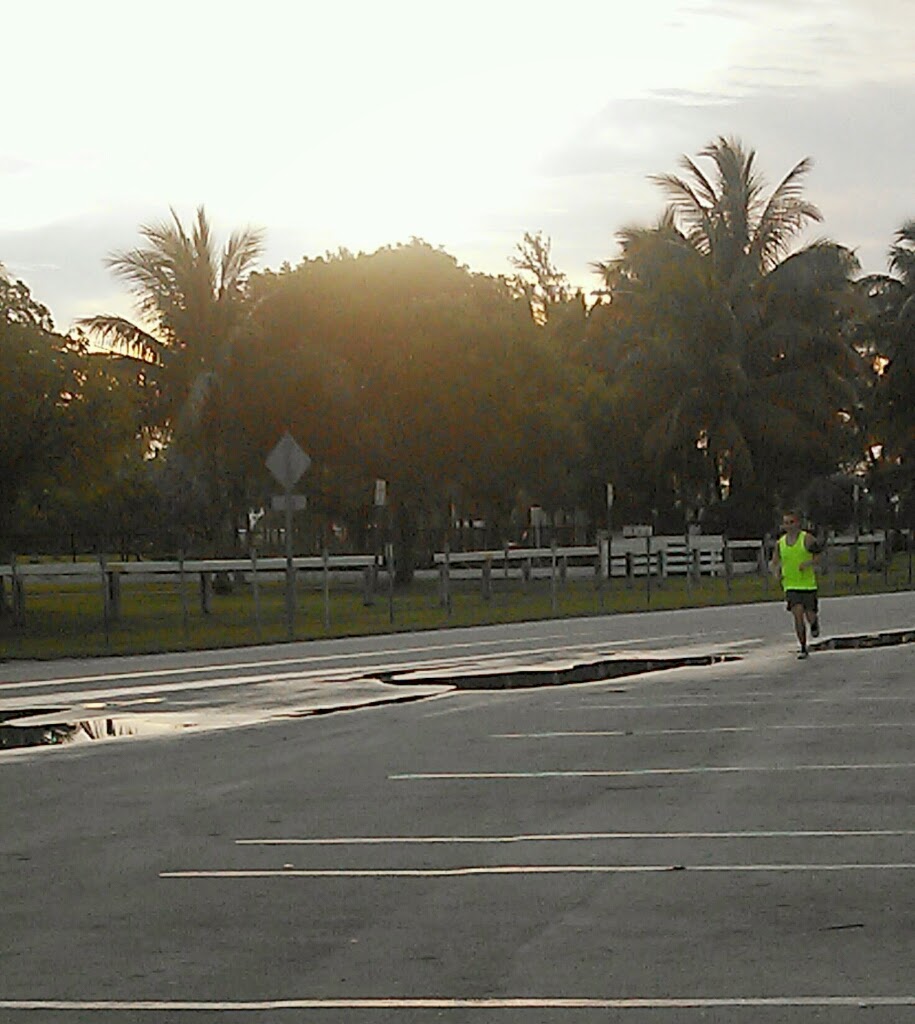 ﻿I limit myself to ambling in public, trailing and always hunger furry yellow bear of a dog. I call her Pooh Bear sometimes but she pays no attention to people when is out hunting fish. grizzlies have their wild salmon, Pooh Bear has her bags of bait fish. I am caught in the flow armed only with a telephone. 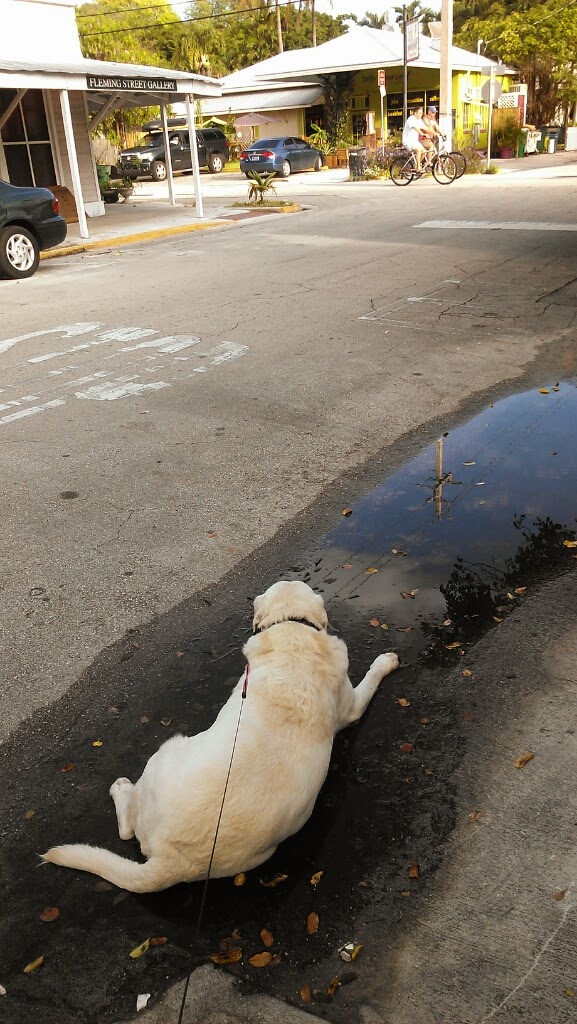 And then ﻿later, across the city she decides she's had enough and find a comfortable spot from which to watch the world go by on Eaton Street. It's a dog's life and I stand there to one side with my phone and keep an eye on her, unseen, unneeded.
Posted by Conchscooter at 12:00 AM 5 comments: