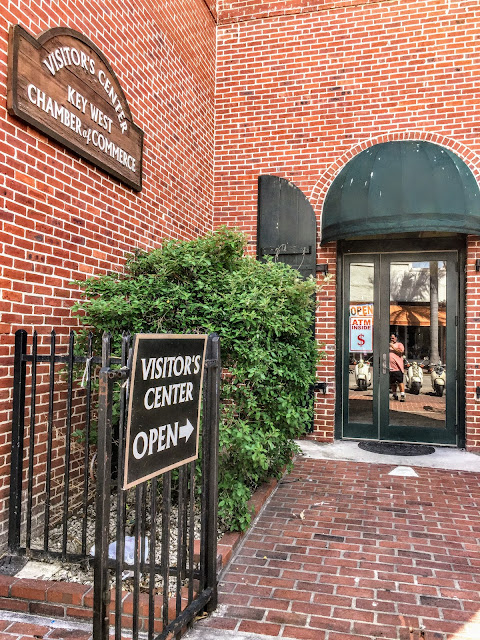 During the hurricane and the immediate aftermath I was grateful for Facebook ans the lines of communication it offered. However that period of information exchange has reverted to business as usual making it too much of a place to whinge and trade barbs so I have veered away. However the last I was reading people are or were, still complaining about premature tourist visitation. That ship has sailed. Or, more accurately that cruise ship has long since landed. There was one Tuesday peeking over the roof tops: 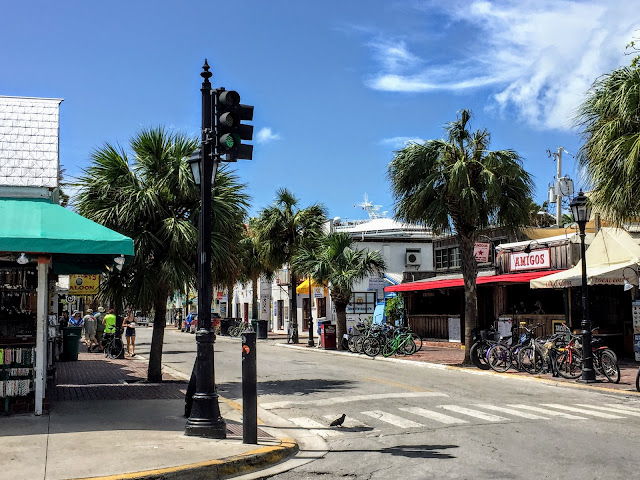 The other side of the Keys is being tended to, more or less well according to who you talk to by the Red Cross on Flagler Avenue and FEMA, the federal emergency management people at the firehouse on Simonton Street: 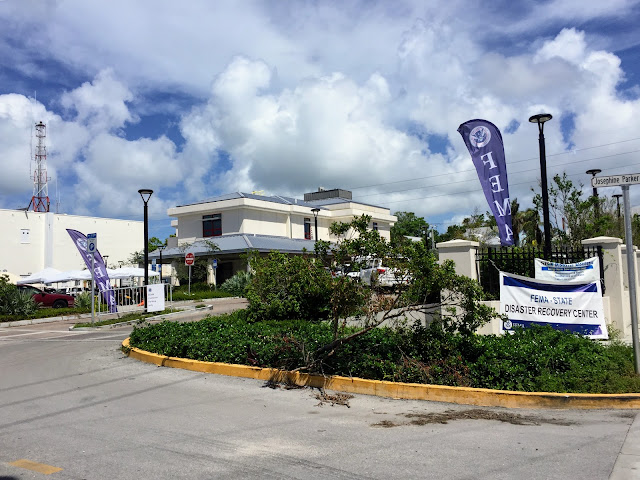 I took a walk downtown after my exercise class finished trying to wipe me out on Tuesday and I poked my iPhone into a few corners of Duval to see what's what. The long and the short is that things are picking up even if it wasn't madly busy. It usually isn't anyway this time of year. Sloppy Joe's: 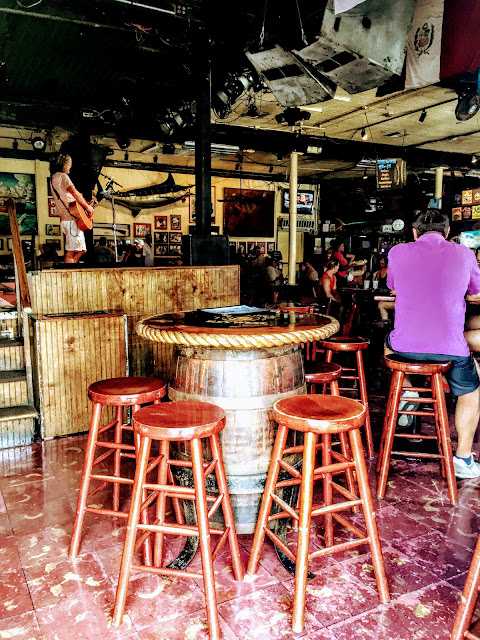 I thought about rolling up the sidewalk as I looked south on Duval Street: 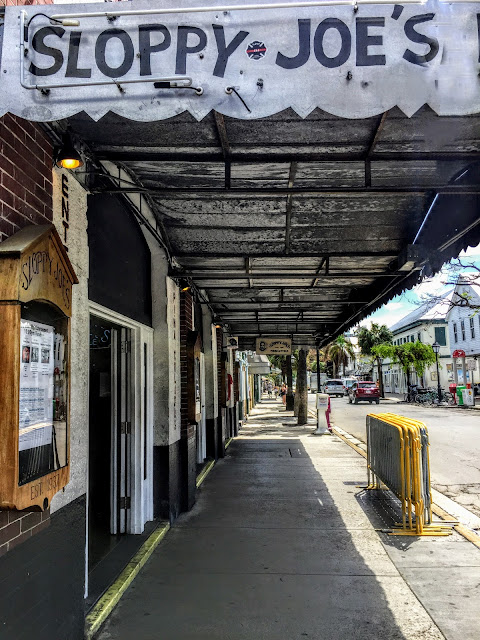 But there were people having fun in the place so I left them to it: 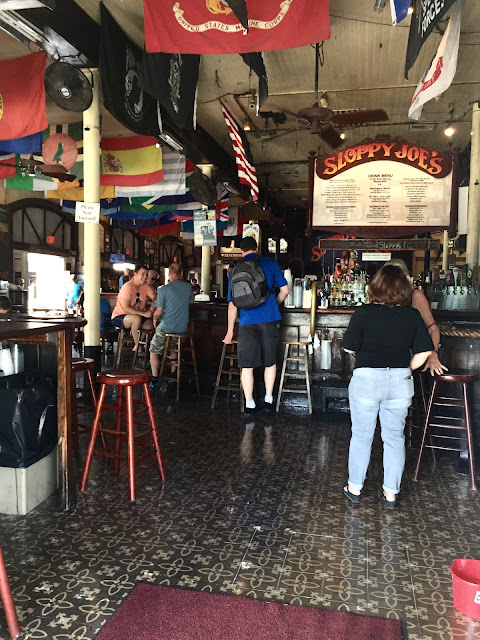 Rick's was dead quiet and Smokin' Tuna around the corner was promising to open for evening entertainment. The Red Garter had at least some naked women to display judging by the open door. For some (strange) people that about takes care of Key West and everything you need to know. 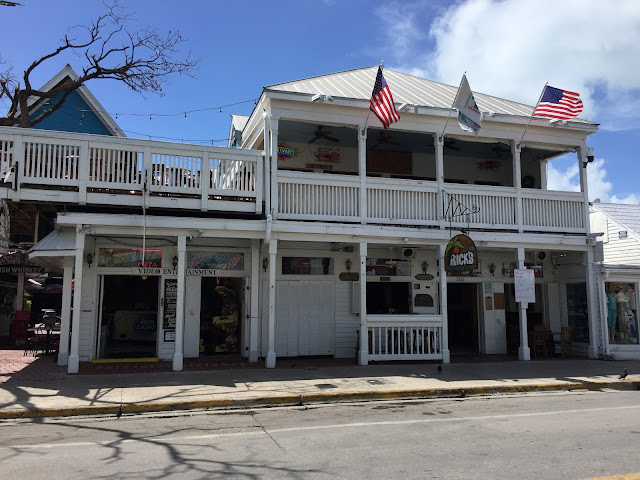 Then there is the promise of Fantasy Fest scheduled to start the last full week of October the 20th with parties and the promise of  forbidden delights of the flesh. In the spirit of preparation the city has put out bundles of barricades for use during the Grand Parade the Saturday night that wraps the week up. I wonder what sort of parade it will be this year with so much effort going into rebuilding lives. Building a one time use float by contrast seems like a bit of a waste of energy to me. 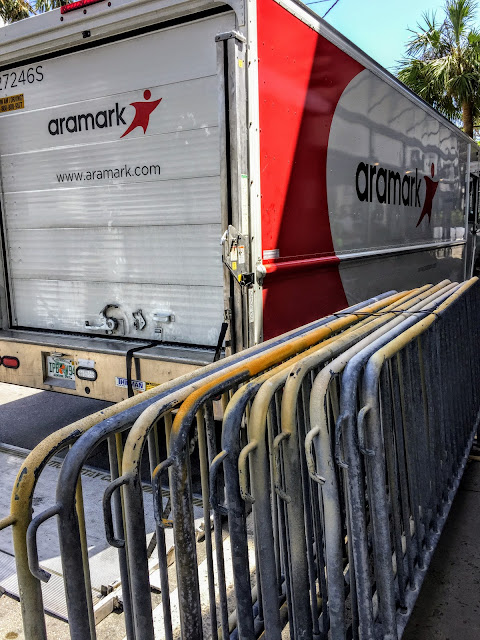 The al fresco drinking at the Bull where smoking is encouraged which means I'll never get to check the interior of the place. Not that there's much to check. I have never been inside Ricks, The Bull or Sloppy Joe's or Irish Kevin's but Captain Tony's I did once have a beer in because a friend wanted a souvenir mug (true story). I am just not much attracted to the noise and crush of drinking in places like that. I still miss Finnegan's Wake. 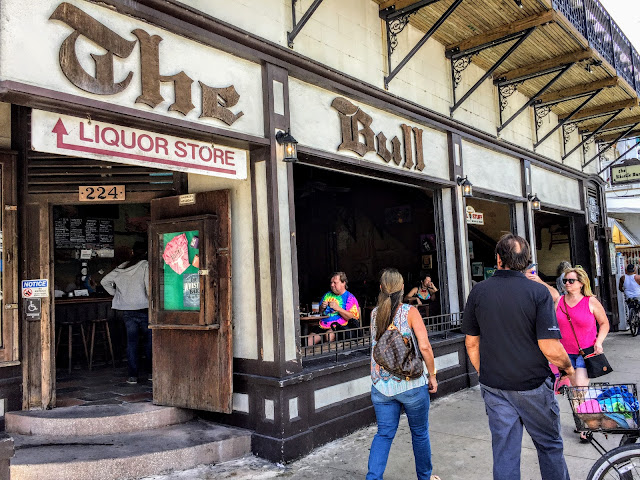 Your dream job, one of three to support life in these Keys, is opening up at Shorty's Market right in the heart of Duval: 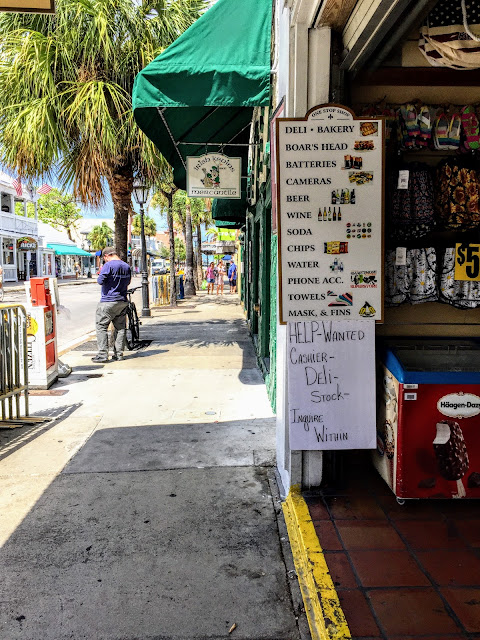 Irish Kevin's blasting music appealed not one jot to me. My idea of an Irish Pub is a place of pregnant pauses and long silences and appreciative beer tasting. The Croc store is not a bargain hunter's delight either and I don't pay full price. I might if they sold pink men's in size 13 but they are gone forever apparently. 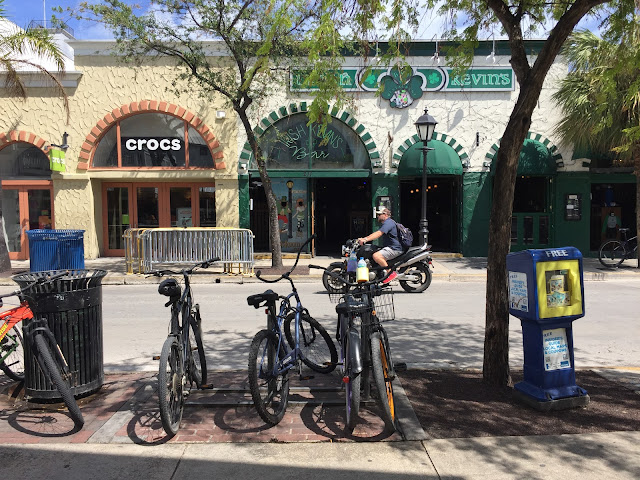 Not a place to sup craft ales and contemplate the meaning of life or the craft of writing. Maybe I'm wrong but I'll never know: 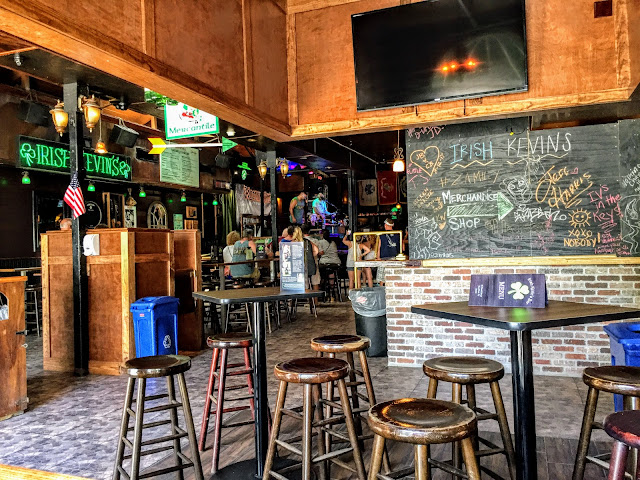 I have absolutely no clue why this picture ended up in my camera but here it is. A mystery. I guess people really were walking on Duval... 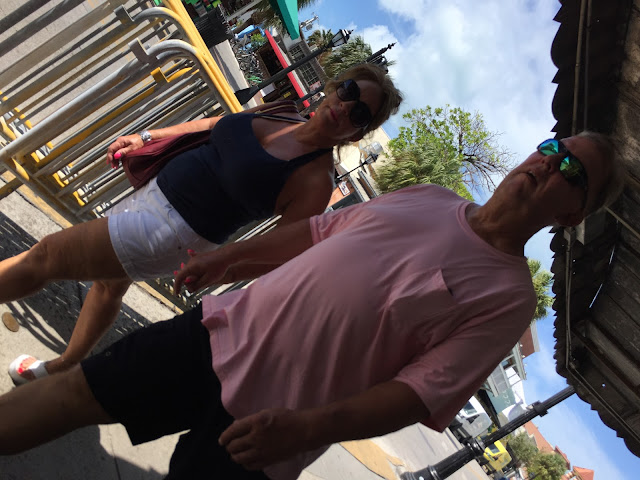 Yes, there were a few at Greene and Duval: 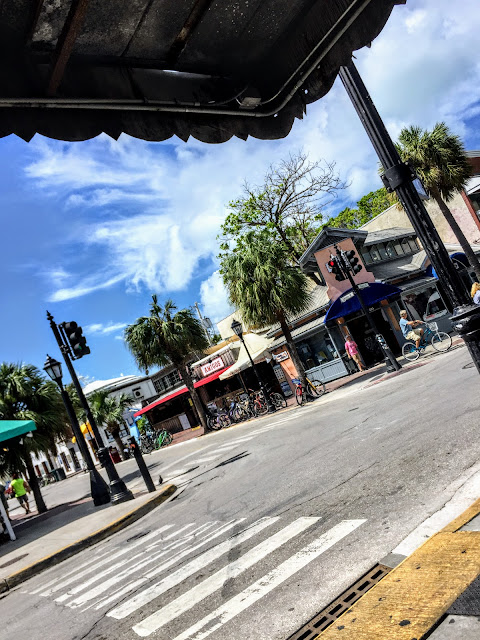 Rental scooters are back filling the free two wheeler parking spaces. At least the trash and debris is gone opening up more room. 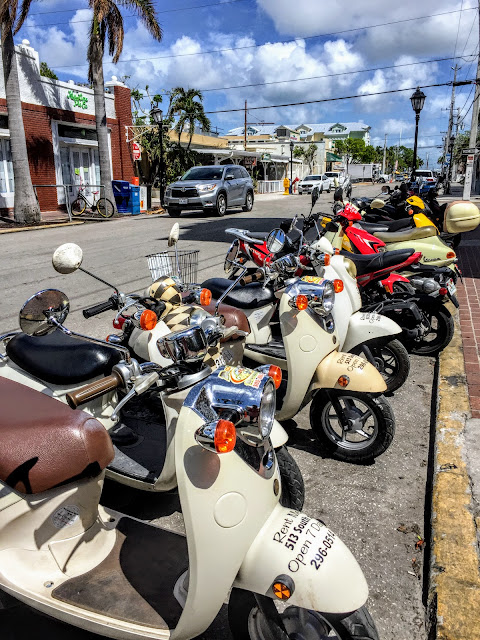 And electric cars are back too, creating their own hazards as their drivers treat the public streets as playgrounds. 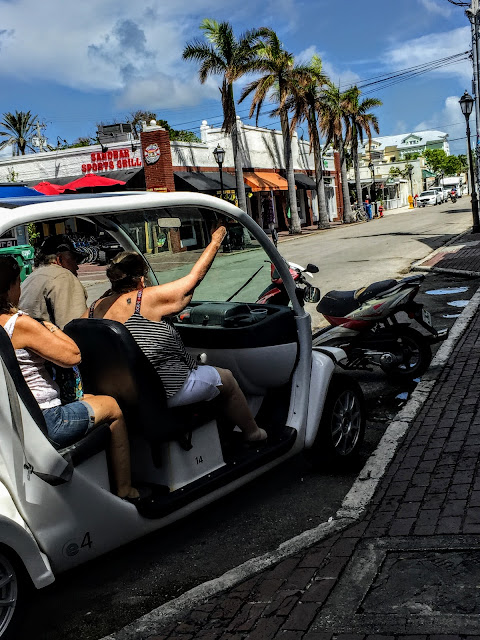 Willie T's took some of the most severe damage during the storm when the big tree fell down and knocked the place about. Drama queens used images of the bar as a sample of the destruction wrought by Hurricane Irma when it was the Lower keys outside Key West that got beaten up. 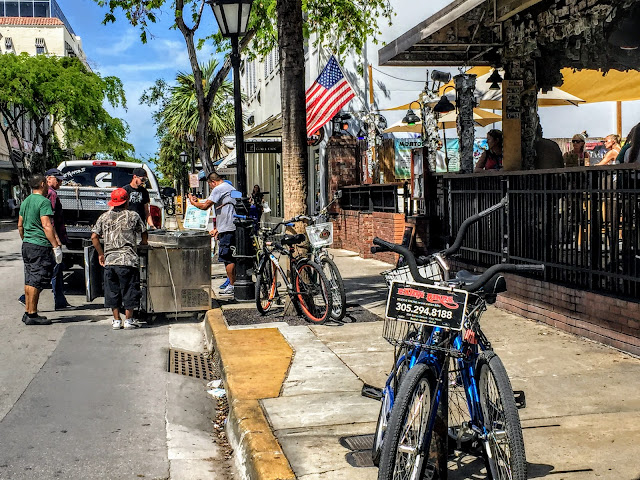 In any event they are back: 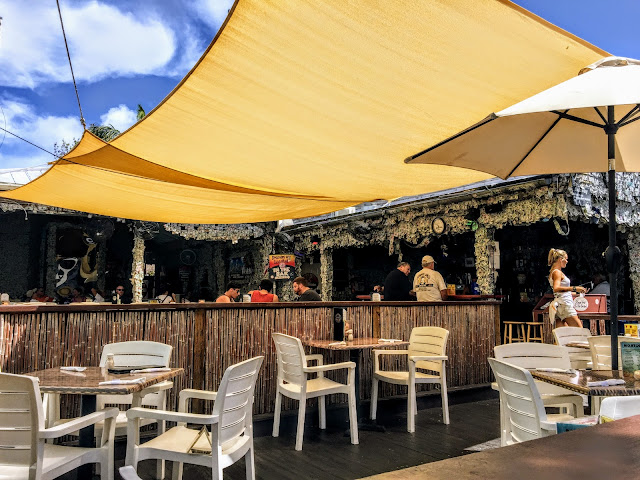 The San Carlos hasn't changed one bit as clam and serene as ever: 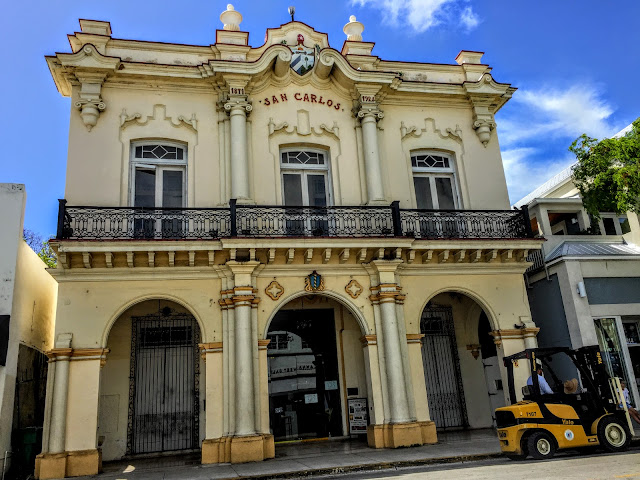 Not sure why Duval was closed but this sort of thing happens all the time, usually for street cleaning, but if you are irritated by this stuff you might not want to visit quite yet. Things are not entirely back to normal. 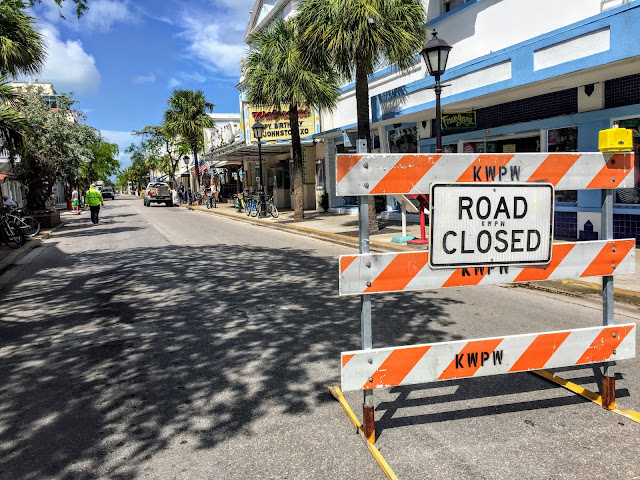 Upper Duval (the south end) looking the same as it ever was: 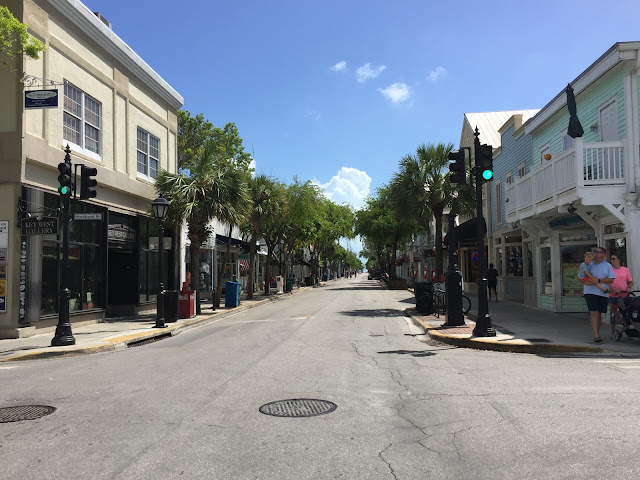