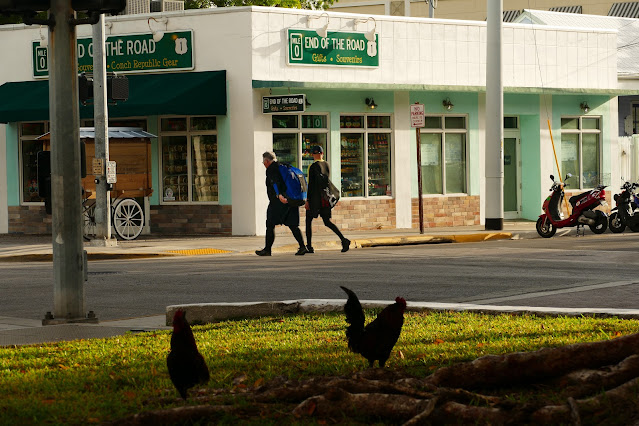 The end of the road, that's what they say about Key West. I crossed paths with some guy at a  party when once upon a time I attended such events, and he was new in town. He couldn't get over the fact that at last he had made it to the end of the road. A giant dead end. He was proud of himself. I think alcohol got the better of him and he faded  back Up North. And left behind this image in my head of me living at the end of the road, a kind of yellow brick road of dreams, at the bottom of a dead end jutting out into the ocean. He found the notion fascinating, I find it slightly unsettling. I had quiet a nice life even before I stumbled into Key West looking for work. 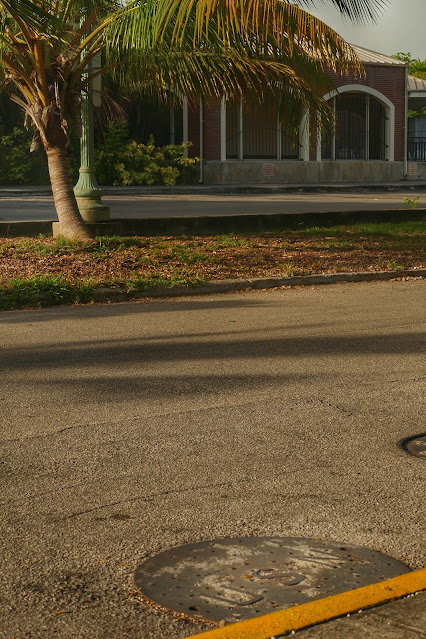 If you look closely at the inspection cover in the street above you will see the letters USN stamped in the metal plate. That's because this was a city filled with US Navy bases and artificers who put together  a lot of the infrastructure you see today around the city. There are still seven navy installations around here but this is not a town filled with bell bottom pants or gob hats anymore. It is a frontier town one has to suppose on a border with a country with whom our leaders are not very friendly but none of that really impacts daily life in the tourist set. Visitors are titillated by the thought of the Godless Communist Isle just 90 miles away, closer than the nearest Walmart, but it's presence has no impact on life here. 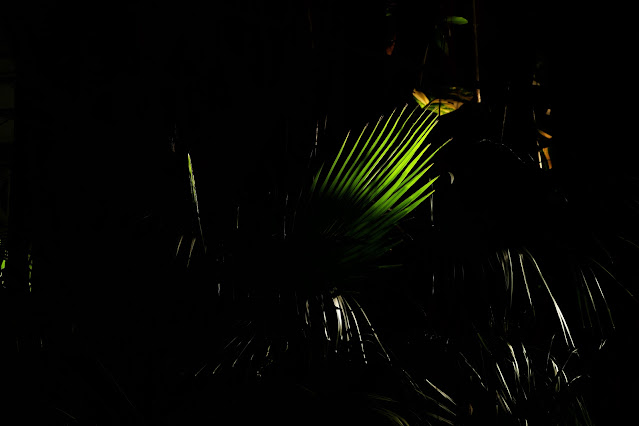 I watched the two figures stepping away from me on Whitehead Street and then I thought about making a picture and the point I wanted to illustrate was how we live in Key West, the blue uniform walking to her hospitality job, the yellow t-shirt jogging to better health for a happier vacation memory. A few of us who live in between the two types work for the government in one capacity or another. We live with regular pay and boring hours and normal shifts in a  town that celebrates vacations! That is a little off kilter. 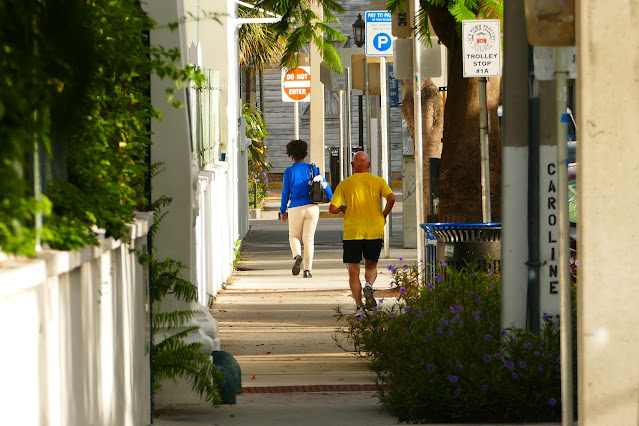 Here's another funny little thing while we're looking around Whitehead Street. The dude on the bicycle in the picture below, is riding into Truman Annex, the former Navy base converted  to civilian housing. He is riding through the pedestrian entrance next to the gates that are never opened to vehicles. 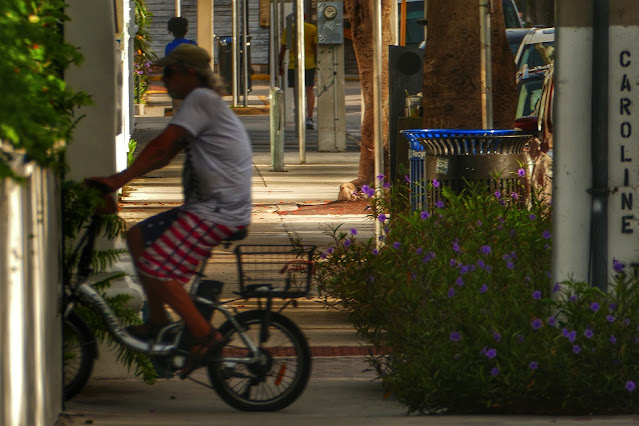 They are called the Presidential Gates as they are supposedly only used by Presidents who used to visit the Navy base and stayed at the Commandants house later renamed the Truman Little White House as he spent so much time there. Indeed the columns alongside the gates have Uncle Sam's monogram cast on them. 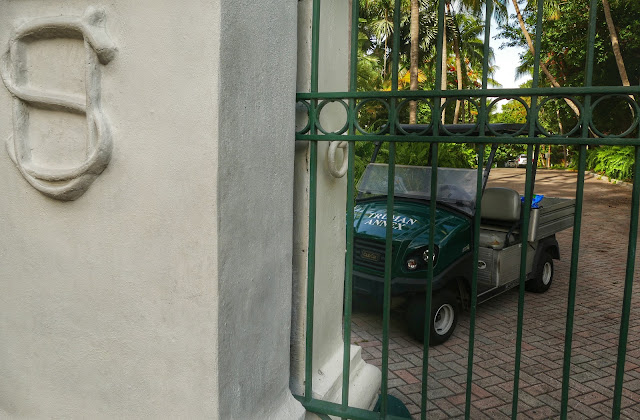 The water tanks  from the days before water was piped to Key West from Miami. Before World War Two the city survived on rain water and stored water for passing ships to resupply.  the war forced the Navy to rethink things and they built the water pipe alongside the new continuous road to make sure the Navy had enough water here to monitor the southern approaches and engage in anti submarine patrols. The water tank has fallen into disrepair as much history has in Key West. 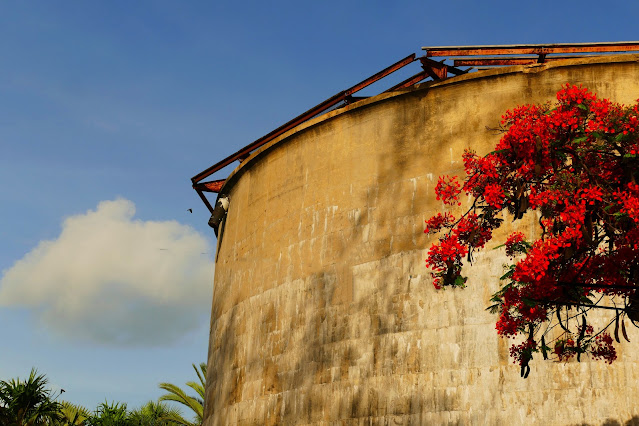 Sometimes small dogs like to rest and watch the world go by. So we stop and do just that until small brown dogs are ready to move on. It's his time devoted to his needs so if he wants a break he gets one. 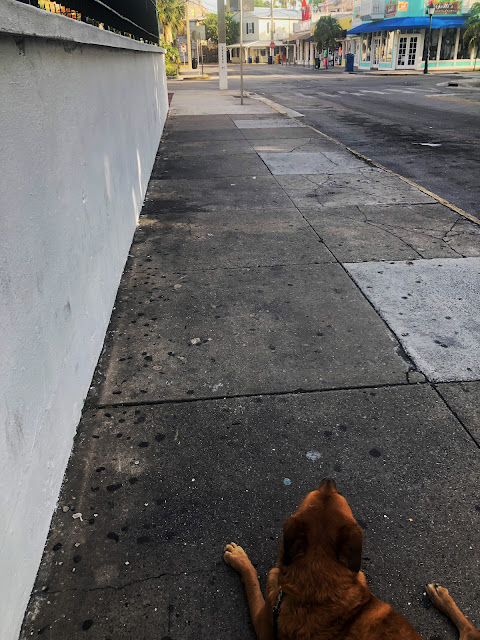 I love this weird cargo tricycles operated by a  charter boat company. I saw them years ago in Mexico and I was sorely tempted to buy one and stick it on the deck of my boat and bring it to Key West. I had no reason to own a cargo tricycle other than the lust for one so I didn't follow through but here they are... 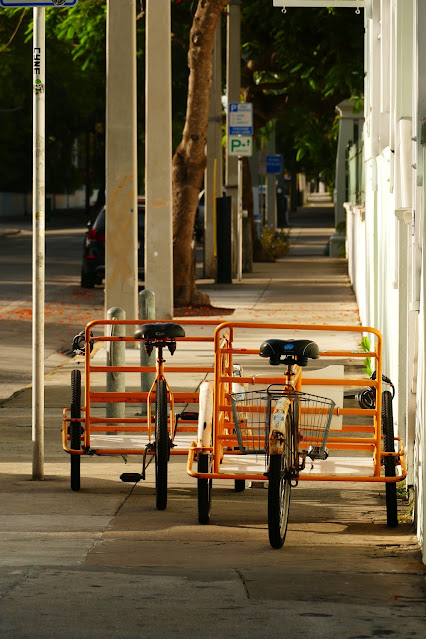 And it turns out they haul quite a load. She pedaled by with nary a squeak from the overloaded machine. Now I know I want one with still no reason to have one. We aren't taking bicycles on the back of our camper van so a tricycle is decidedly out of the question. 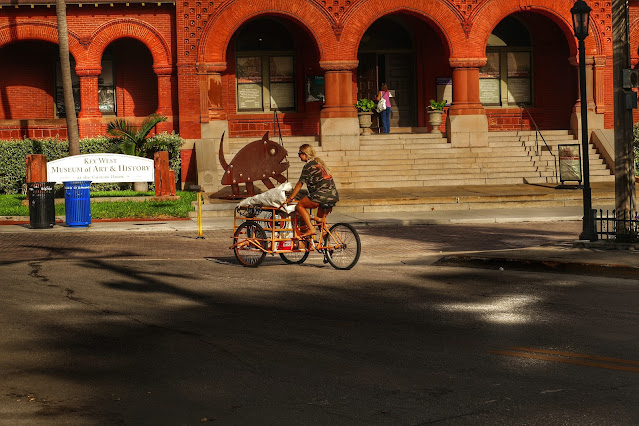 The yellow brick road that ends at Margaritaville Resort as all good yellow brick roads should. It's all part of the schtick I mentioned earlier. I go to the police station when I come to Key West. When the rest of America shows up they go in search of Jimmy Buffet. I met him once in a former job and he was very nice passing the time in idle chat during a  work break (my break not his). I had no idea who he was, everybody else at work knew and made endless fun of my ignorance. That's why I know I met him. My Key West moves in different circles from him or his fans but I do see his parrots from time to time. 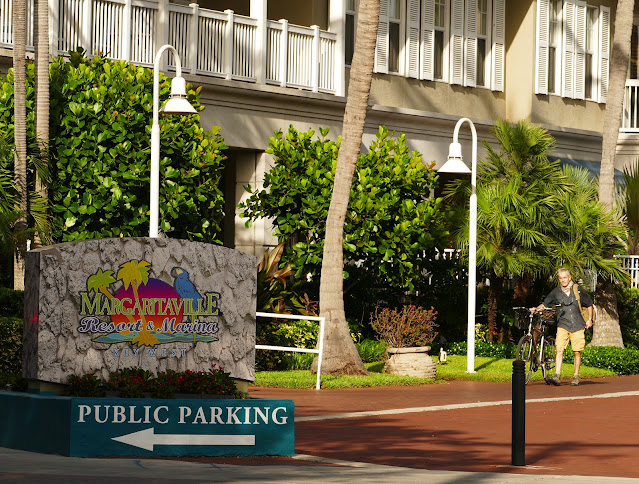