I saw this rather startling graph on zero hedge not exactly a limp wristed left wing site. Happy Monday to you too, if like me you wonder why no one questions corporate America's hold on our country. Corporations aren't people.

Suzie dePoo, one of Key West's most venerated artists, died peacefully on Wednesday morning at her home on Dey Street. She was 90.

Famous for her art made from found objects, she sculpted fish and mermaids out of wire and painted flowers and damsels on flotsam and jetsam. In the 1950s and '60s, she scavenged glass from what was then called Bottle Beach near the White Street Pier, transforming it into art. Her unicorns and cherubs and sea scenes also appeared on tiles; her large ceramic tile work can still be seen at the Monroe County Library.
"I can't paint on canvas," she said at a retrospective of her work at the Key West Museum of Art and History at the Custom House in 2001. "I like a piece of wood that has its own voice. And I don't like to add too much color. I like to let the wood talk." Of her sculpture she once said, "I think architecture is beautiful -- and I had all this chicken wire lying around."
She was born Agnes Zuzek on Dec. 5, 1920, on a farm in Gowanda, N.Y., near Buffalo. The daughter of Yugoslav immigrants, she picked up the name "Suzie" from those who had trouble pronouncing her surname. She and her sister, Rose, served in the Women's Army Corps during World War II.
The name dePoo came from her husband, John, stepson of the eminent Dr. Julio dePoo who founded the first dePoo Hospital on Southard Street. She and John separated 25 years ago but were only recently divorced.
On the G.I. Bill after the war, she attended Pratt Institute, the school of art and design in Brooklyn, N.Y., where she studied illustration and design. She later took classes at the Art Students League in New York City and her first civilian job was creating floral patterns for a designer of clothing and drapery fabrics.It was in New York that she met her husband and where their first daughter, Katherine, was born. In the early 1950s they moved to Key West and she went to work for the Hand Print Factory, designing landscape, seascape and floral patterns. During the quarter-century that she worked at the factory, she had two more daughters, Amy, who died in England in 2010, and Martha, who also is a Key West artist.
The home and studio that Suzie dePoo maintained at 614 Dey St. became emblematic of the rambling Key West artist compound so often dreamed of by the artistically inclined. Shared by a population of at least 20 cats, it was a hideaway for someone who simply liked to live in her own world. It was there that she created ever more idiosyncratic work, quite a lot of it featuring Adam and Eve. "It's one way I can paint nudes," she said.Known for the gentlest smile and smallest voice, dePoo never ceased in her creativity. That faded a little about a year or so ago, but only in the past two months did she became obviously unwell. "I just want to go home," she began to tell her closest friends.
A funeral Mass will be celebrated at noon Thursday at St. Mary Star of the Sea Catholic Church on Truman Avenue, with a reception to follow at the nearby grotto.mhowell@keysnews.com 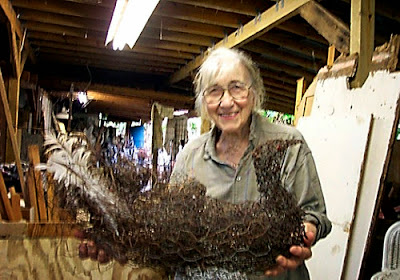 From The Gallery On Greene, SuzieDPoo.

Most venerated and highly reclusive of the famed women artists of Key West, Suzie DePoo’s career has spanned many decades. At 85 she is one of the most mature and refined artisans. Although she is best celebrated for her watercolors and ceramic tile creations, she also works in ancient, reclaimed drift wood, centuries old glass from Bottle Beach collected in the fifties, wire and just about anything that can be shaped or painted on. In a word Suzie DePoo is a classicist.

She graduated from Pratt Institute on the GI Bill after serving in the second world war. Her work is monochromatic or vivid in color, the expressive distortions remind one of what it takes to make fine art. She incorporates classic literary influences; mermaids, unicorns and Biblical references. She is ruminating in her later eremite life, taking immense pleasure exploring variations on themes. Well into her eighth decade the work becomes more lustrous and valuable. Much of Suzie’s sum and substance was displayed at The Customs House Museum one woman show “A Remarkable Retrospective”.

Many of Key West’s most prestigious collections include Suzie DePoo’s work. Her large ceramic tile work graces the Monroe County Library, two exquisite examples of art in public places. She created originals for the Pier House when it first opened and also painted the piano for the bar. Other examples of her work include the entire ceiling, walls and doors of a near shore island, elegantly treated with color on wood. Her classical training at Pratt prepared her for thirty years of textile design at Key West Handprints.

During the years when the Handprint factory produced fabulous serigraphic works with natural dyes on Sea Island Cotton, Suzie was selected to design intricate representational floral, landscape and seascape patterns reflecting the natural beauty of the Keys. 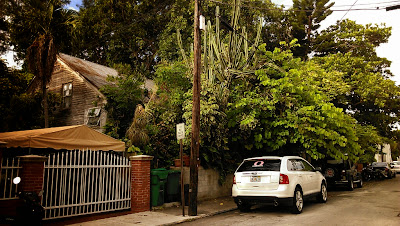 This is where she lived, a ramshackle collection of buildings now in a state of sad disrepair and yet for sale for a fortune. Zillow says its going for $2.2 Million, 614 Dey St, Key West, FL 33040 - Zillow, but the listing no longer shows it on realtor sites I checked. Who knows, perhaps the complex has sold? 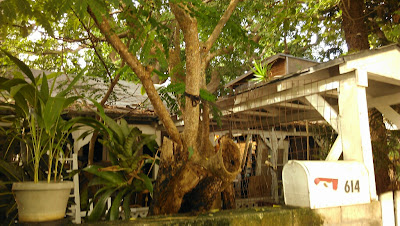 The thing that surprises me is that this venerated local artist has come and gone and essentially no trace is left. I am not sure how much we should venerate those places that once upon a time housed artists and leaders but it is common practice to mark their former homes. God knows Hemingway's house has become a treasure trove to the private family that owns the place. They treasure Lincoln's home in Illinois, they even mark the birthplace of people who managed to rise above the common herd by virtue of wealth or power. 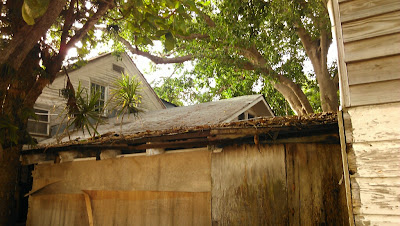 Key West has been a winter home to quite a few notable writers and none of them as far as I can see are marked, and give me a little time and you shall see as well. Odd that, no historic markers for wielders of the pen. Unless they were macho big game hunters, deep sea fishermen and bull runners, or best of all, all in one. The pansies, women, poets and children's authors are not marked let alone do you get charged money to see where they lived. Odd that. 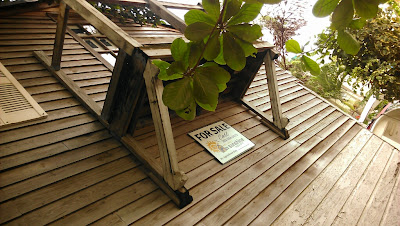 So much cultural wealth so little noticed. Maybe dePoo would have done better among hoi polloi had she had a Twitter account. This video was sent to me by a reader, a tour of her former home. http://www.youtube.com/watch?v=GNWkLHJRQz0&feature=youtube_gdata_player