Every time I ride down Maloney Avenue in the middle of "downtown" Stock Island I am astonished to see so little change. 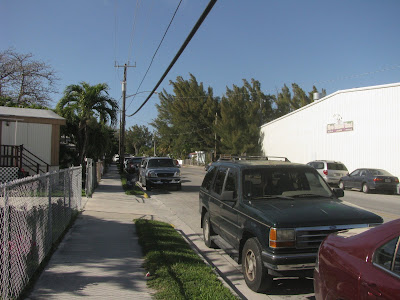 This street starts out at Highway One, by the Chevron gas station as MacDonald Avenue and then, at the curve by the Tom Thumb inconvenience store it becomes Maloney and dead ends into the marina at the southern end. Stock Island is home to the working poorer who earn a living in Key west and can't afford to live there. It's also home to the critical light industry that can't afford the dirt in Key West, welders, body shops, towing companies, warehouses and taxi companies: 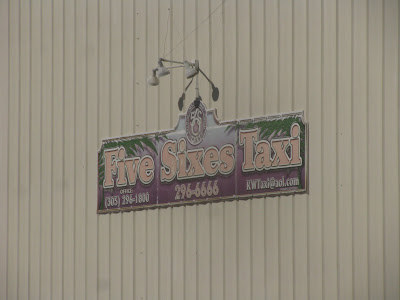 These are the streets lined with trailers and immobile homes, trailer parks and RV parks, the homes of working people. 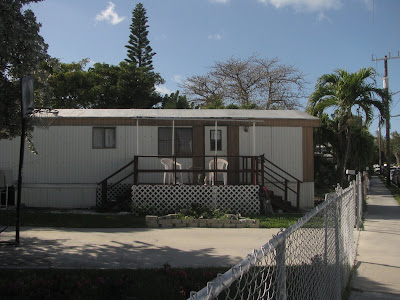 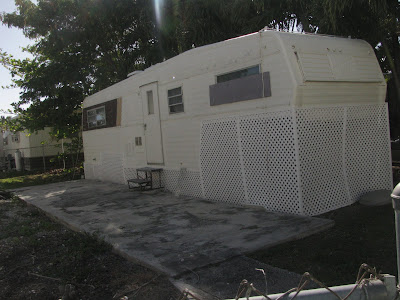 Lots of people don't like the idea of living in a trailer but for me these places are more like land bound boats. 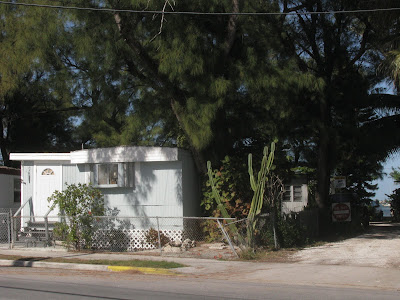 I lived for years on sailboats and it did occur to me during that time that many modern marinas are not that different from trailer parks. A sailboat is a plastic shell sitting cheek by jowl with it's neighbors... 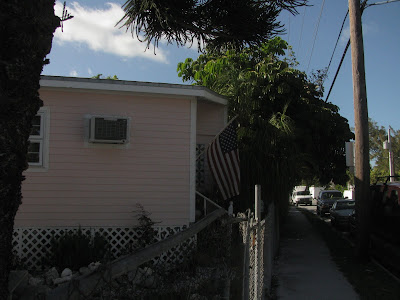 There's a large population of Cubans and Haitians here and you'll see them cycling or riding the bus into Key West. 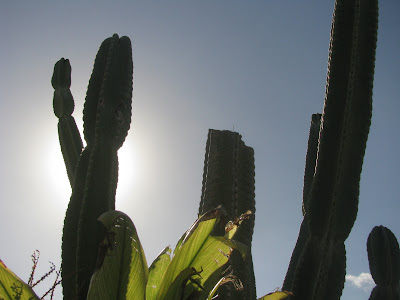 I sometimes wonder what would happen to Key West if the population of dish washers, cleaners and so forth suddenly went missing. 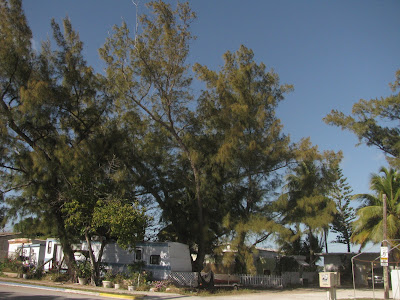 Of course it's not all trailers; these houses of Dade pine have a South Pacific air to them. 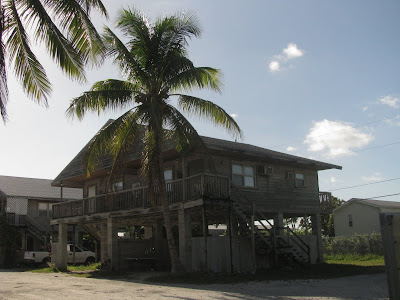 Someone was having fun flying a kite on a windy day. 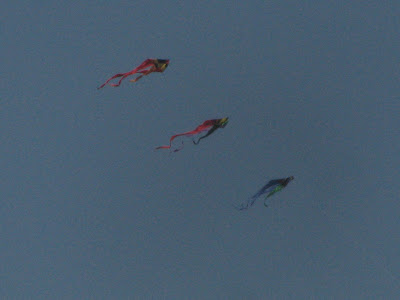 One thing I like in particular about these trailers is the constant effort to grow stuff around them. 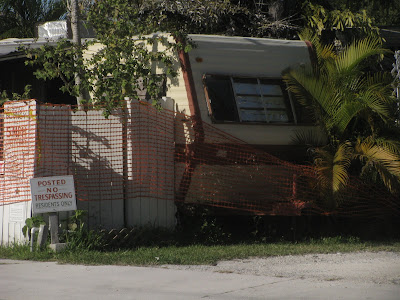 This is a papaya: 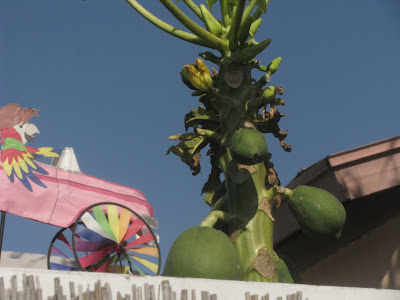 Further south commercial fishing is apparently secured by a large area of commercial docks in some sort of cooperative. There are lots of mostly Cuban fishermen here. I saw a group of them playing loud clacking dominoes. In between time they build lobster traps and paint buoys: 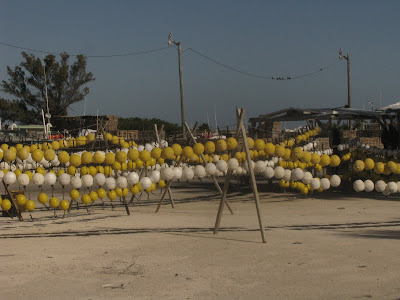 During the boom years of easy credit much of Stock Island was bought up by land speculators and hints were dropped right and left about likely development. But in these hard times lots of development has stopped dead and things don't look much like changing soon. 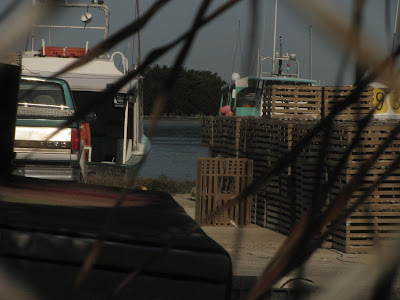 I know progress is all important but I wouldn't much mind if things stayed the way they are for a while longer. 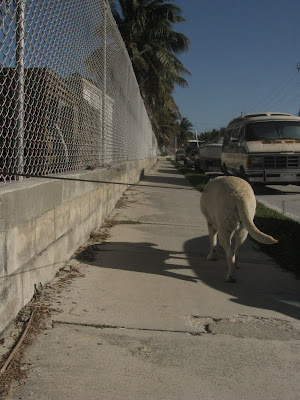 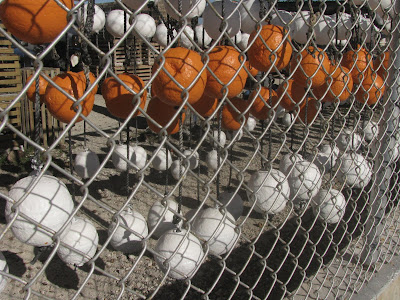 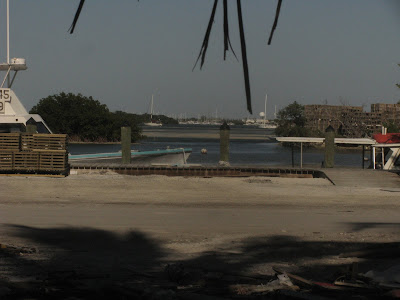 This is where Maloney Avenue ends at King's Pointe marina, the former Oceanside. 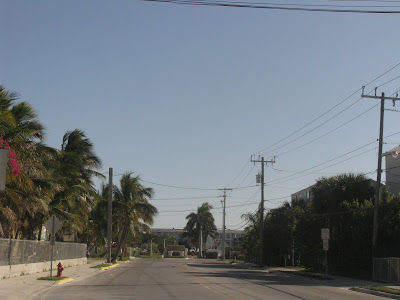 It's quite the life on Stock Island, whether or not it is a trailer. 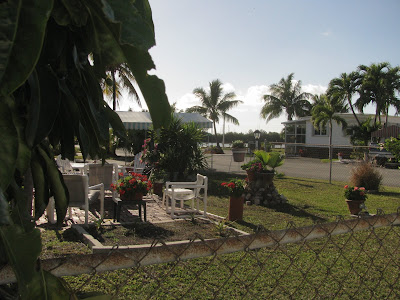 And at the end of Maloney Avenue there is Peninsular Avenue at the end of which is the Key West Harbor Yacht Club, my own refuge from the rigors of daily living. 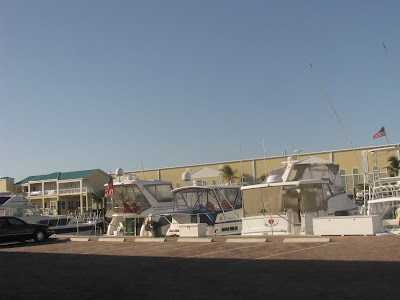 It's actually quite a spiffy marina- one development that did go through before the economy tanked.
Posted by Conchscooter at 12:01 AM 5 comments: Links to this post