The sentiment I saw scribbled in Old Bisbee reminded me of the tensions in Key West where some tired residents referred to visitors rather unkindly as “tourons.”  Rusty was well walked and I was ready to leave Bisbee and take my home away.  Layne was chomping to get south.  It was nine o’clock Thursday morning and I only missed one turn on my way to Mexico. 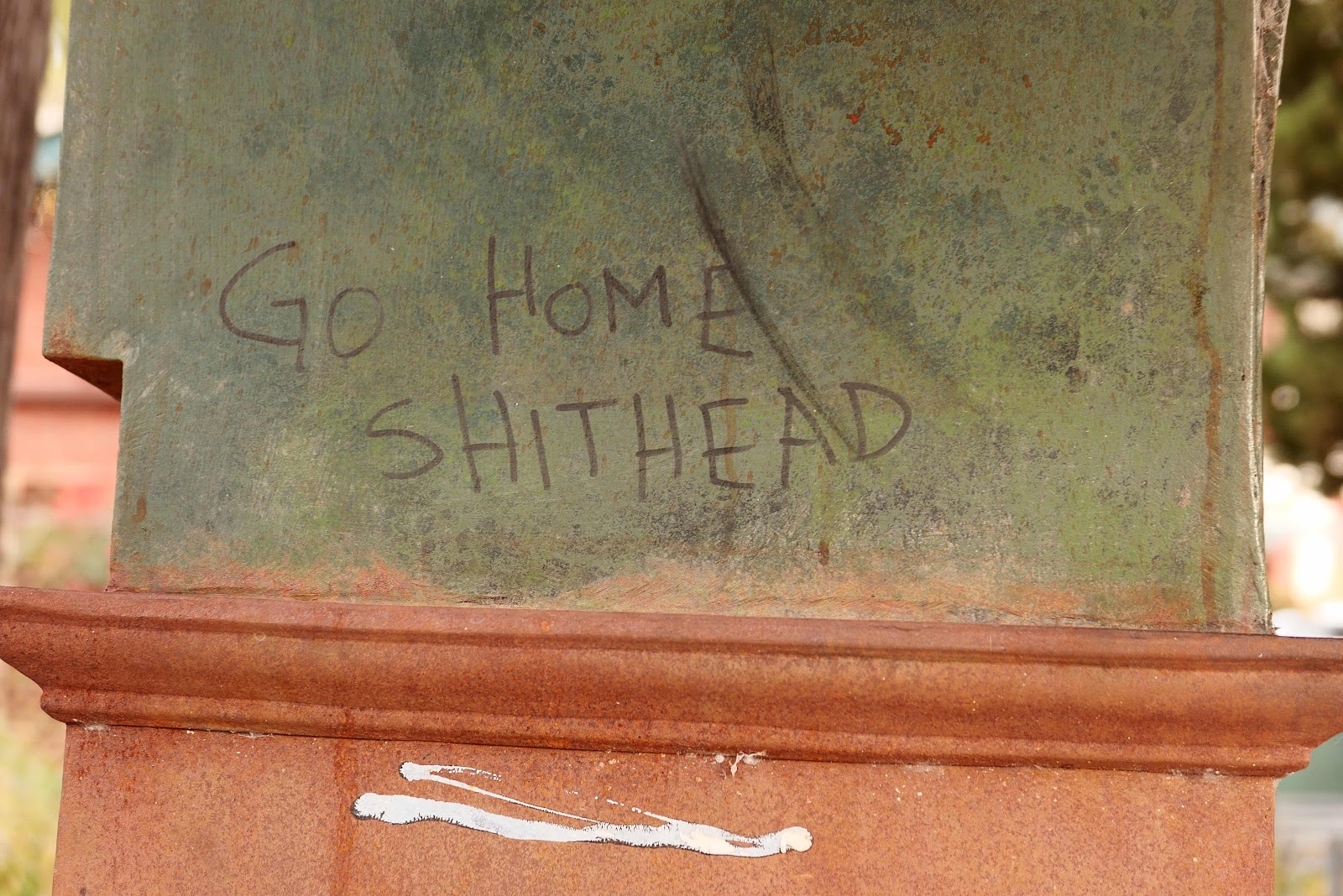 The US border officials stopped us at the last possible moment just to make sure we really wanted to go to Mexico. They were a really nice post of cheerful young men and women in Naco Arizona. I hope we get to cross back here. 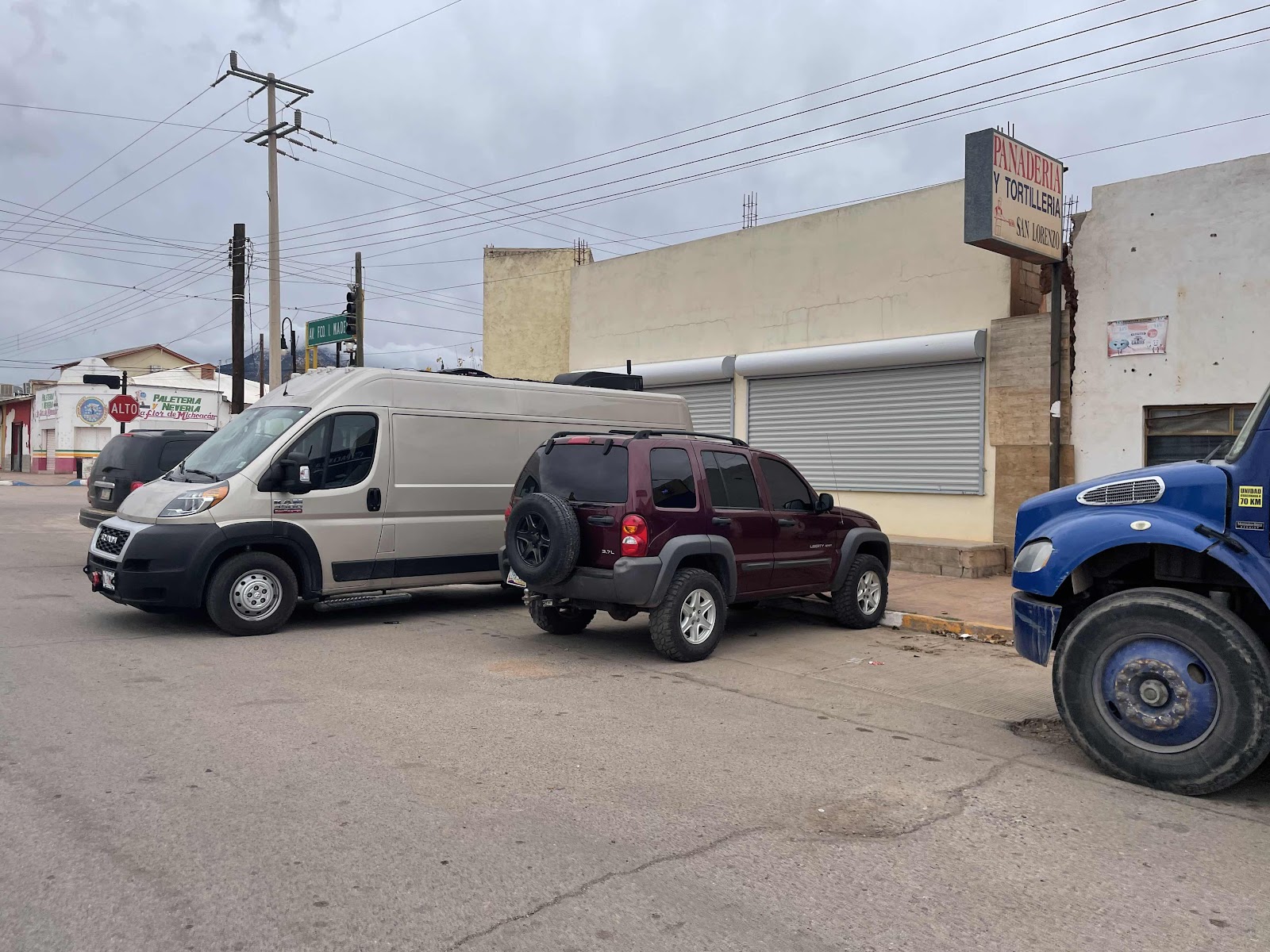 Mexican Customs agents pulled us over for an inspection as we entered Mexico but it turned out they just wanted to check out our van. We talked prices and features and they laughed at the idea of making a van a home. I explained that in my corner of the US it made for an inexpensive home. Layne pointed out it was a good thing to talk Spanish. 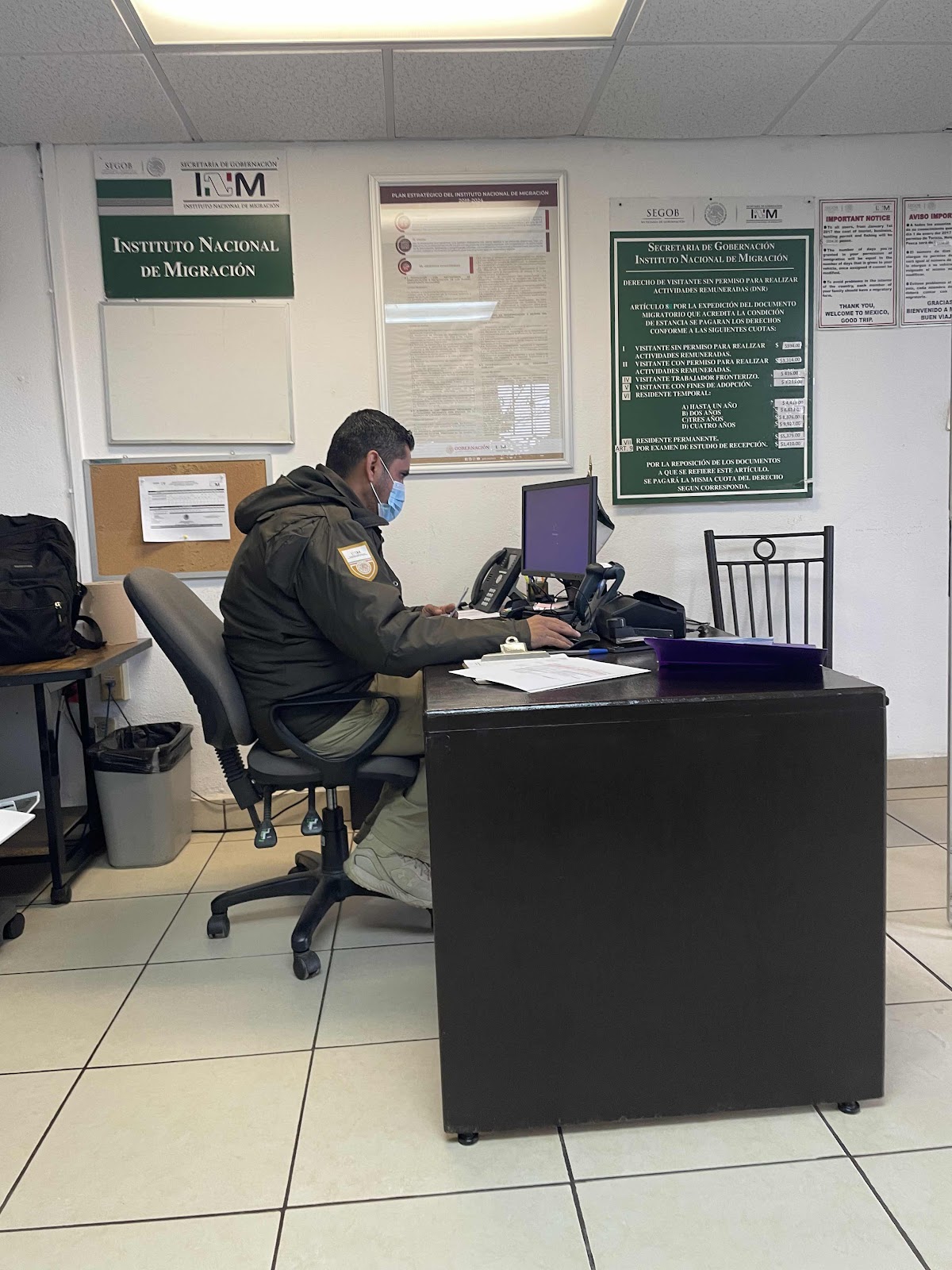 The immigration agent (above) was efficient and kind. He copied our documents himself, apologized for the slow internet connection he had to work with and offered us chairs while we waited. No problem I said we’re retired (“jubilado”) and we have no appointments. We laughed. He told us about his home town of Los Mochis and the ferry to La Paz and how he was going to spend New Year’s in Naco. $31 each and we had a six month permit. 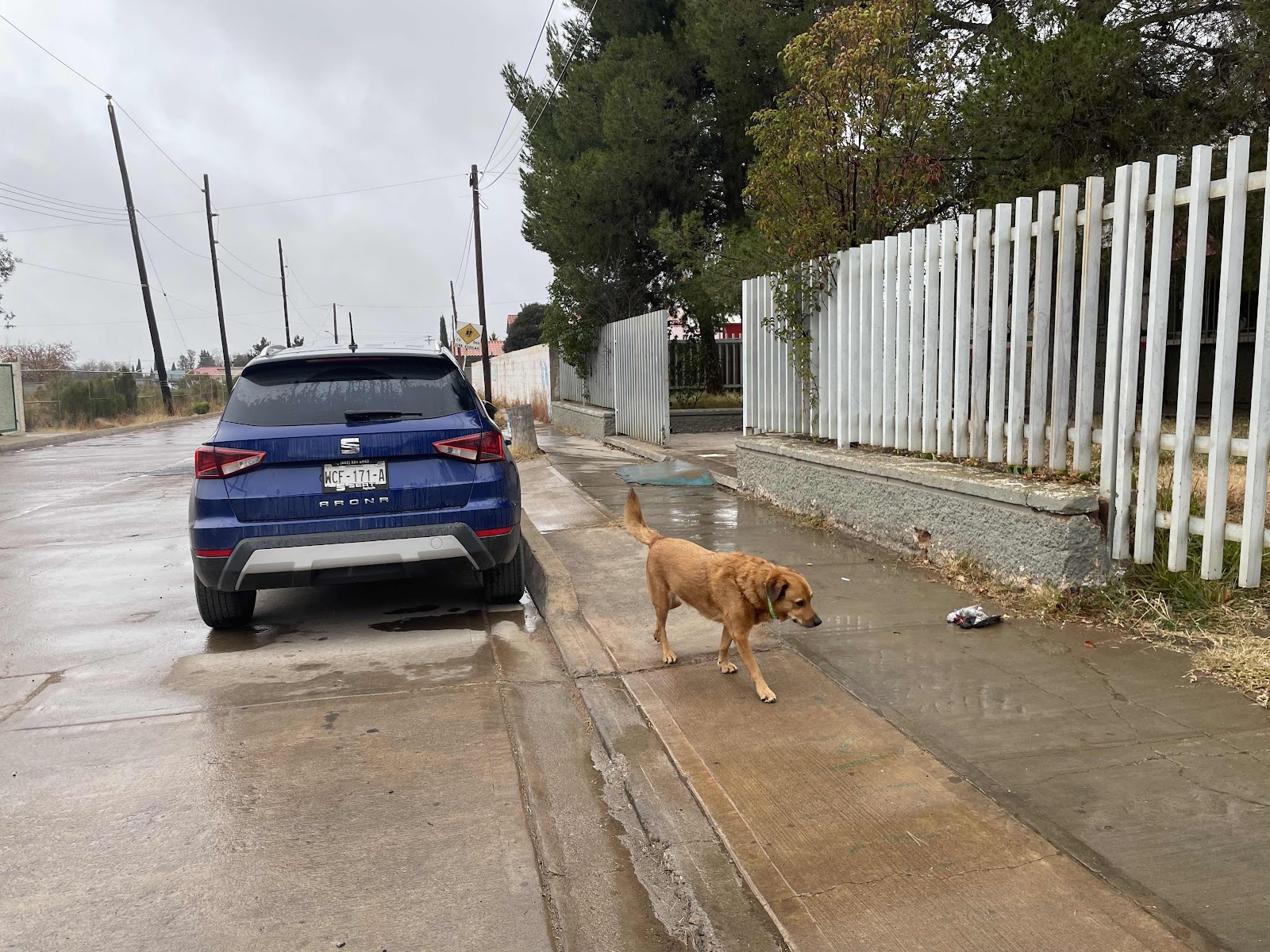 It was raining hard and got harder. We could see a light dusting of snow in the mountaintops. It was cold and wet and gray. Welcome to Mexico. 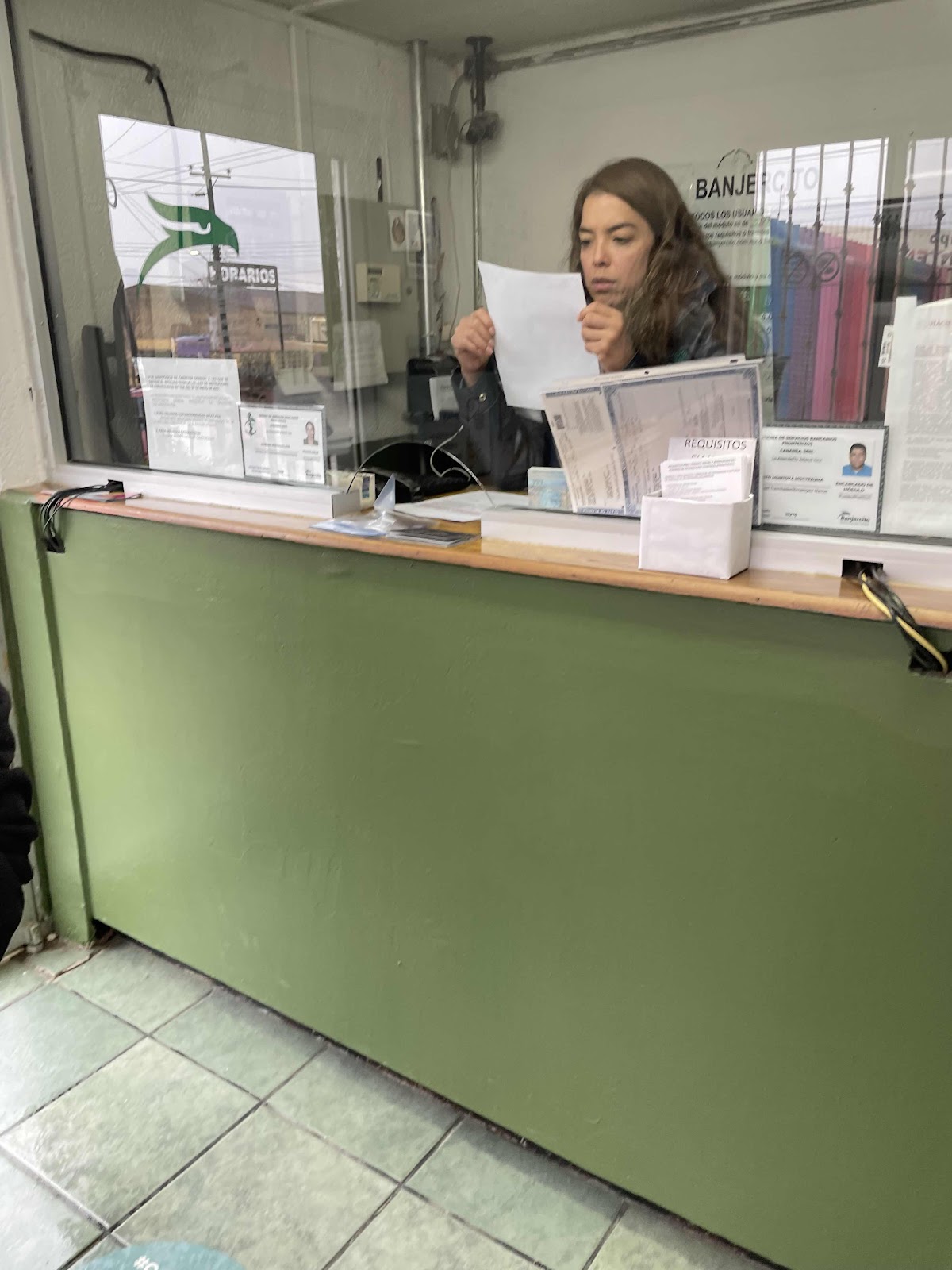 In order to be able to travel outside the easy tourist area around Baja a US vehicle in Mexico has to get a $51 permit. The government treasury bank Banejercito (impossible to pronounce) issues the permits. The office in tiny little Naco where very few people cross (lovely-no lines!) has long since closed. We were told to visit the office in Cananea 45 minutes down the road still in the Hassle Free Zone. The nice lady sorted our papers in the by now usual half hour and we were all legal anywhere in Mexico. Our insurance we had purchased online in Tucson. Mexico was ours to explore and it was barely lunchtime. 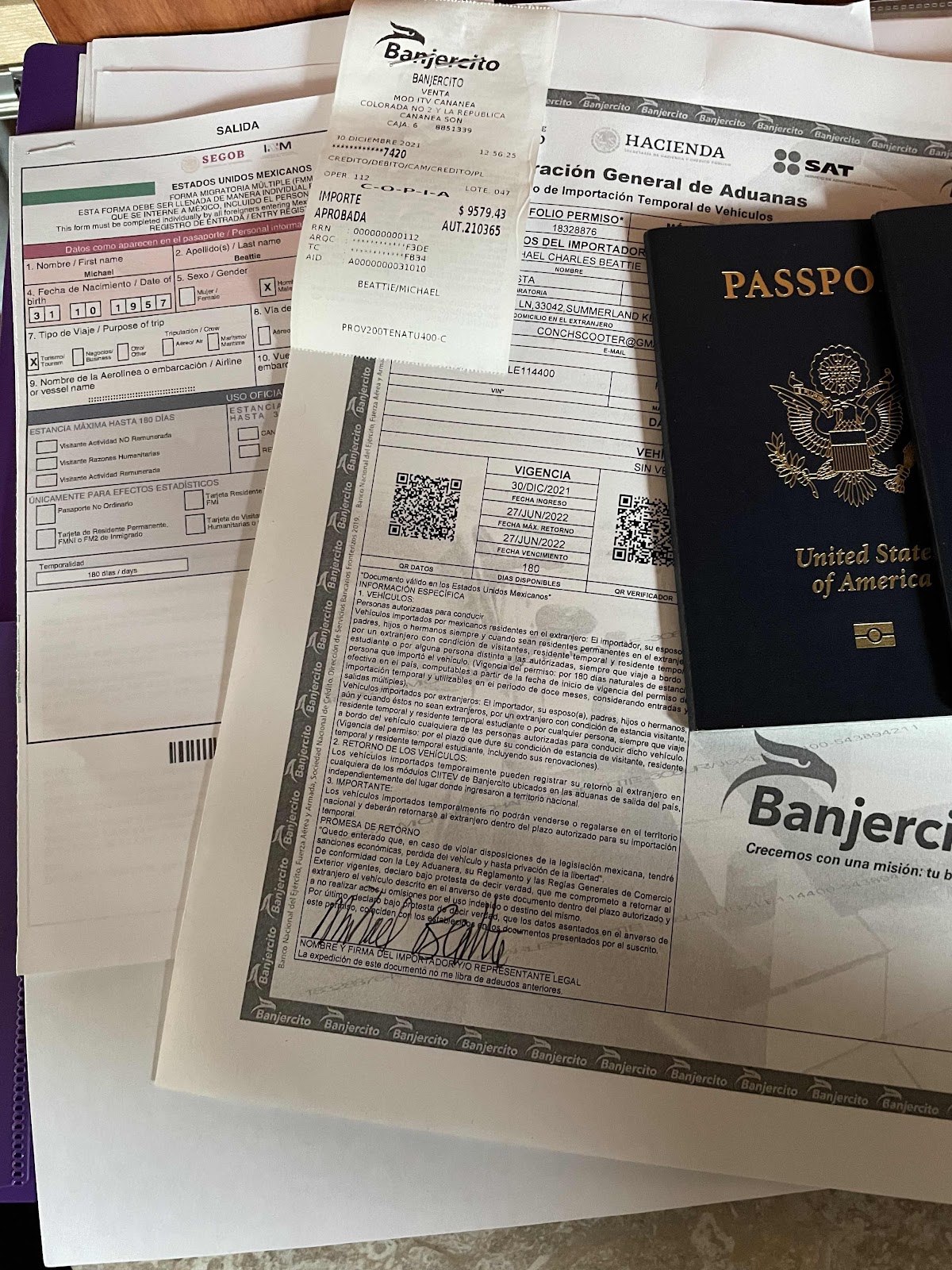 The road from Naco to Cananea is pretty rough and bouncy. We did not enjoy it. After that it improved considerably but we were well off the tourist route.  Naco in Mexican Spanish means roughly “trailer trash” in slang. Cananea comes from two Apache words that mean horse meat. Seriously. They are not, either of them, attractive towns as they are dusty, poor and suffering from Covid mangled economies.  We were the sole tourists on Thursday’s quota. As I dodged lumpy asphalt the locals, the few cars, whizzed by unconcerned. 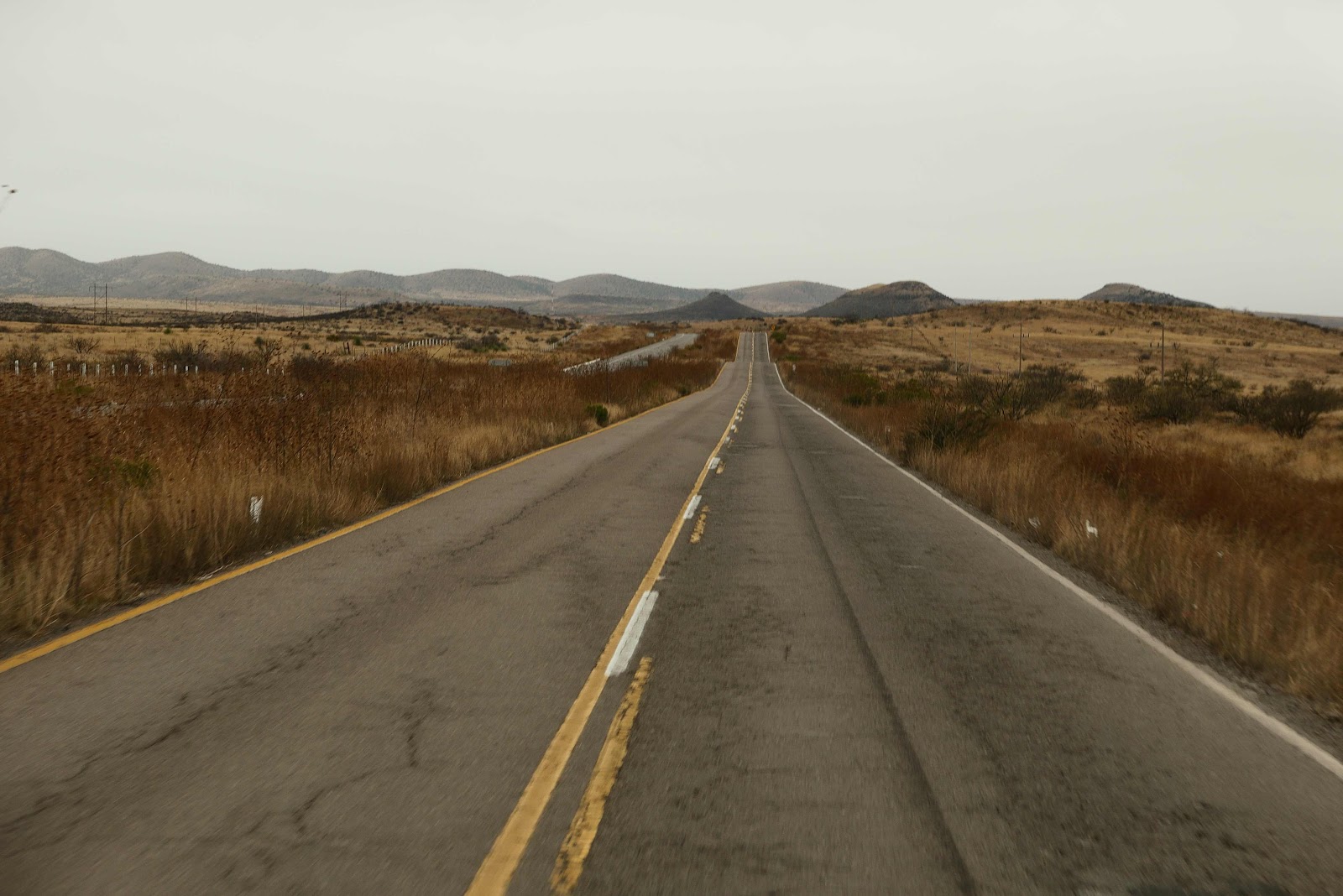 As rain poured down and cut short Rusty’s walk, Layne made tuna fish wraps a healthy alternative to rice and beans in the Mexican style. It was lovely to be in our home on the street. 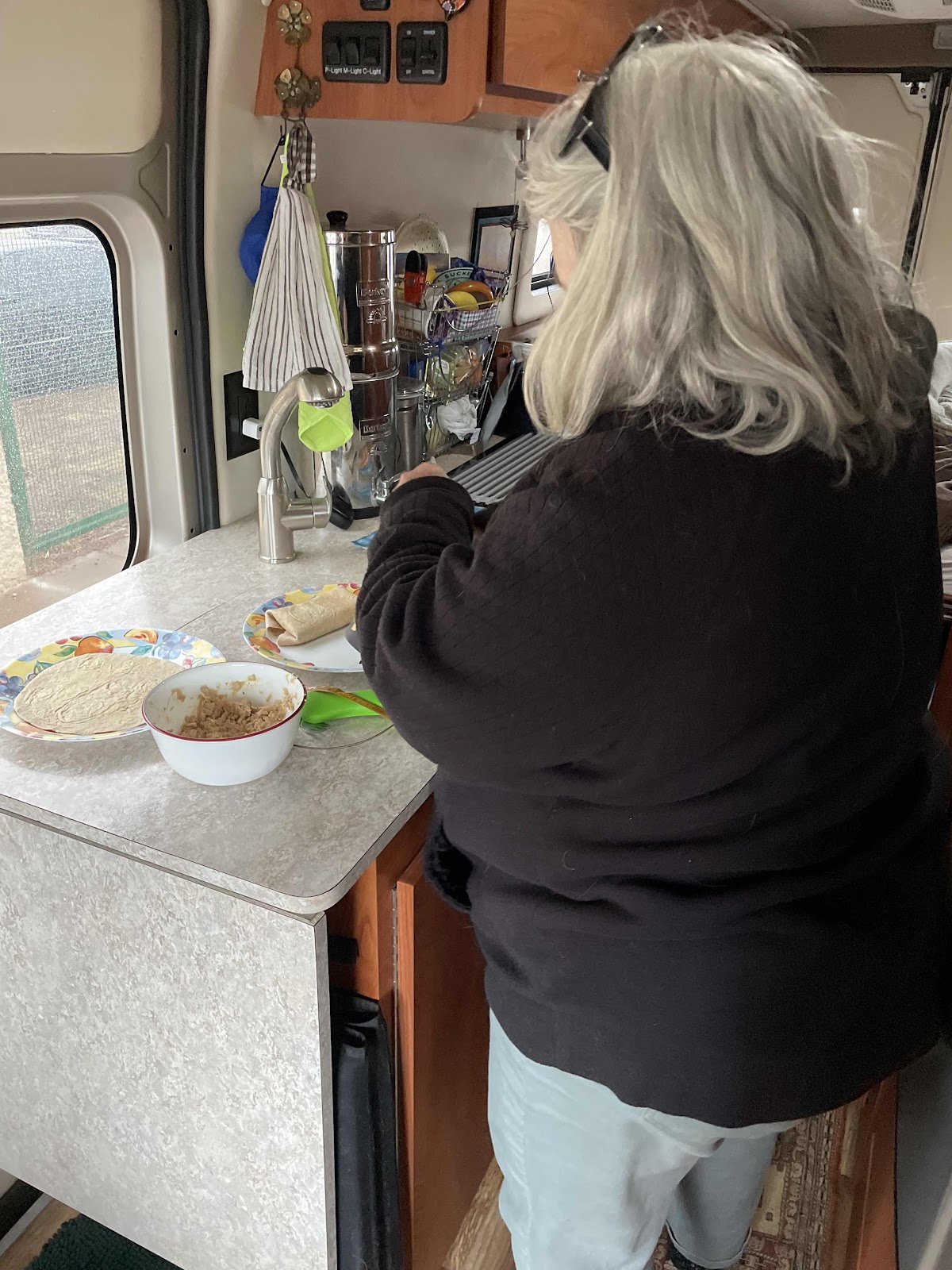 The big question after all the government paperwork was to figure out how to get connected online. After some thought we decided to keep our Verizon iPhones  on our plan with minimal date and free text and talk in Mexico. The trick was to get a SIM card from Telcel to run our JetPak for internet connectivity. I used Google maps briefly to find the government offices and later the Telcel shop both in Cananea. 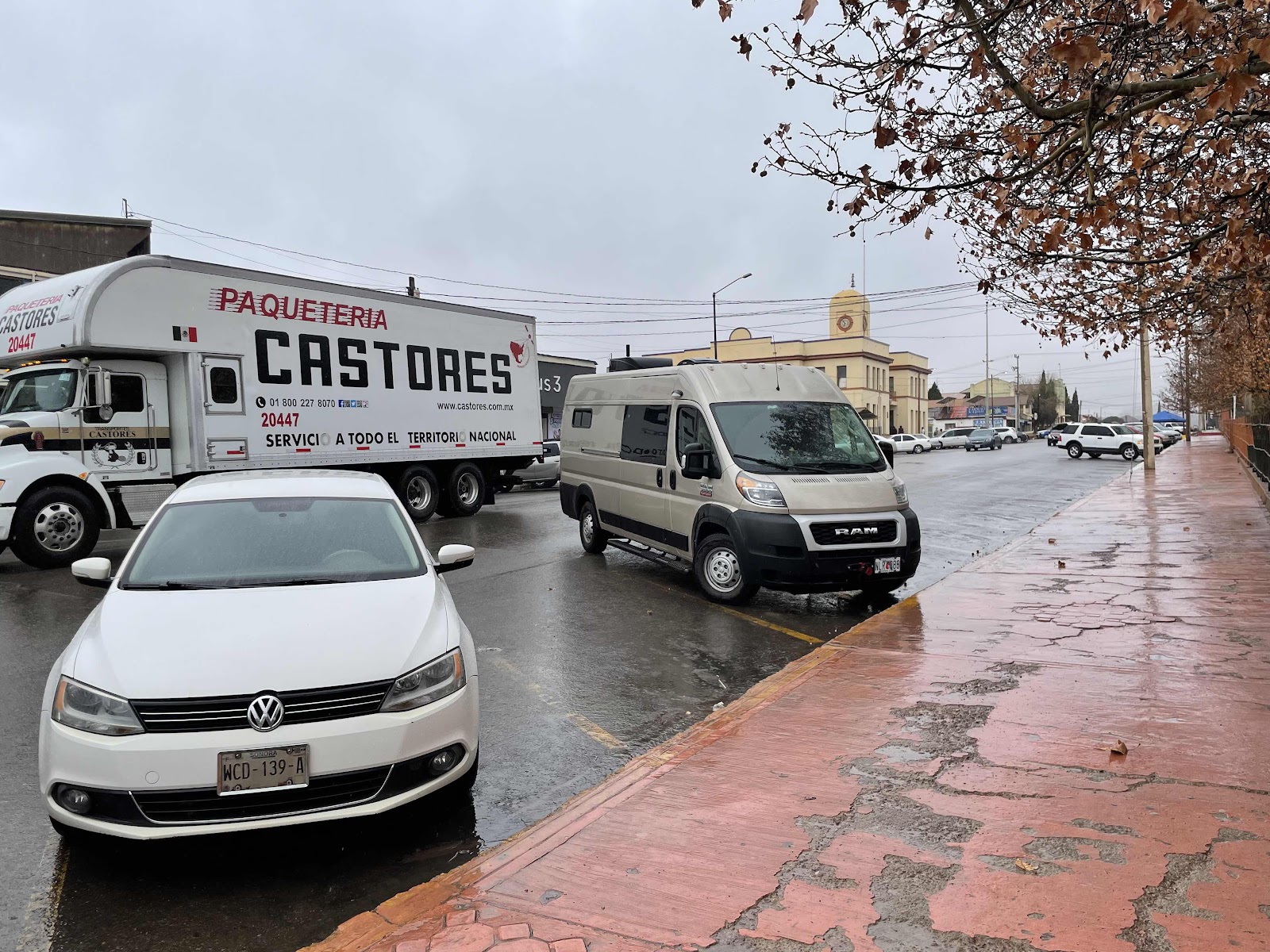 We parked the van and splashed to the store and back. If Mexico sounds exotic it really doesn’t have to be. There are lots of places that aren’t tropical resorts. Most Mexicans live normal lives just like you. (I’m retired, remember?). 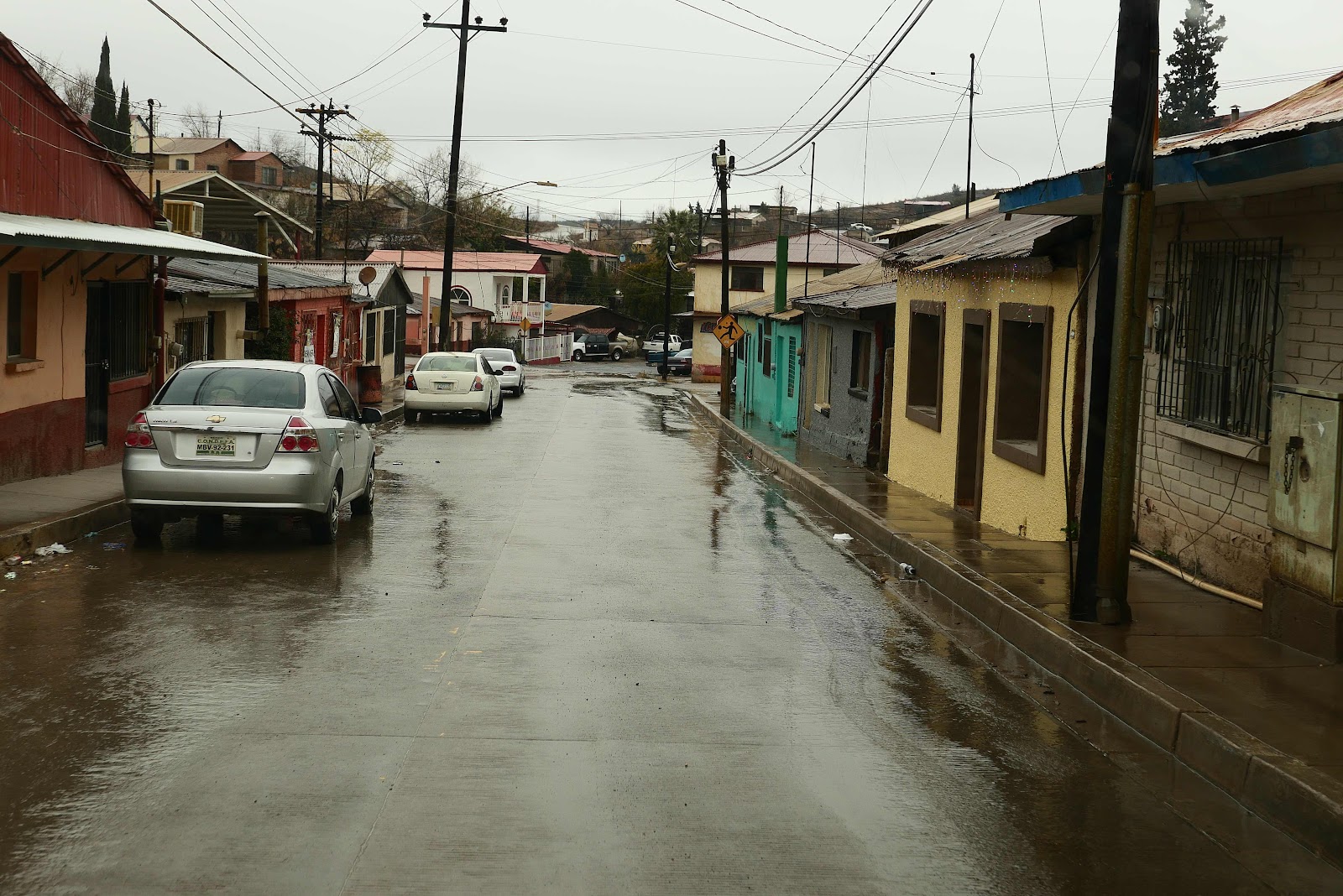 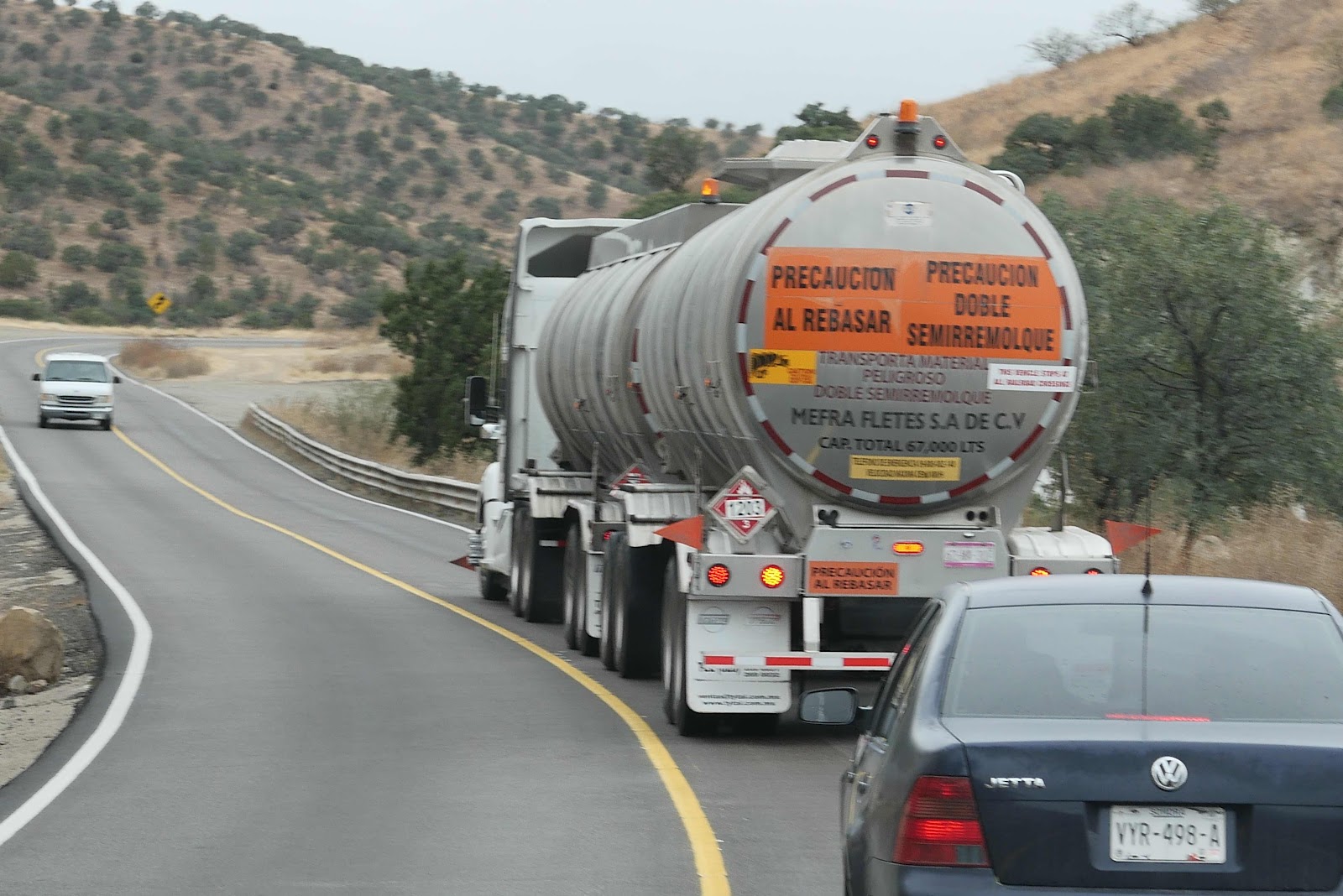 It was a long hard slog to Santa Ana by way of Imuris if you are following along on Google maps. We saw a couple of road blocks but the police checks were in the oncoming lanes. No big deal: we have our papers ready to exhibit. 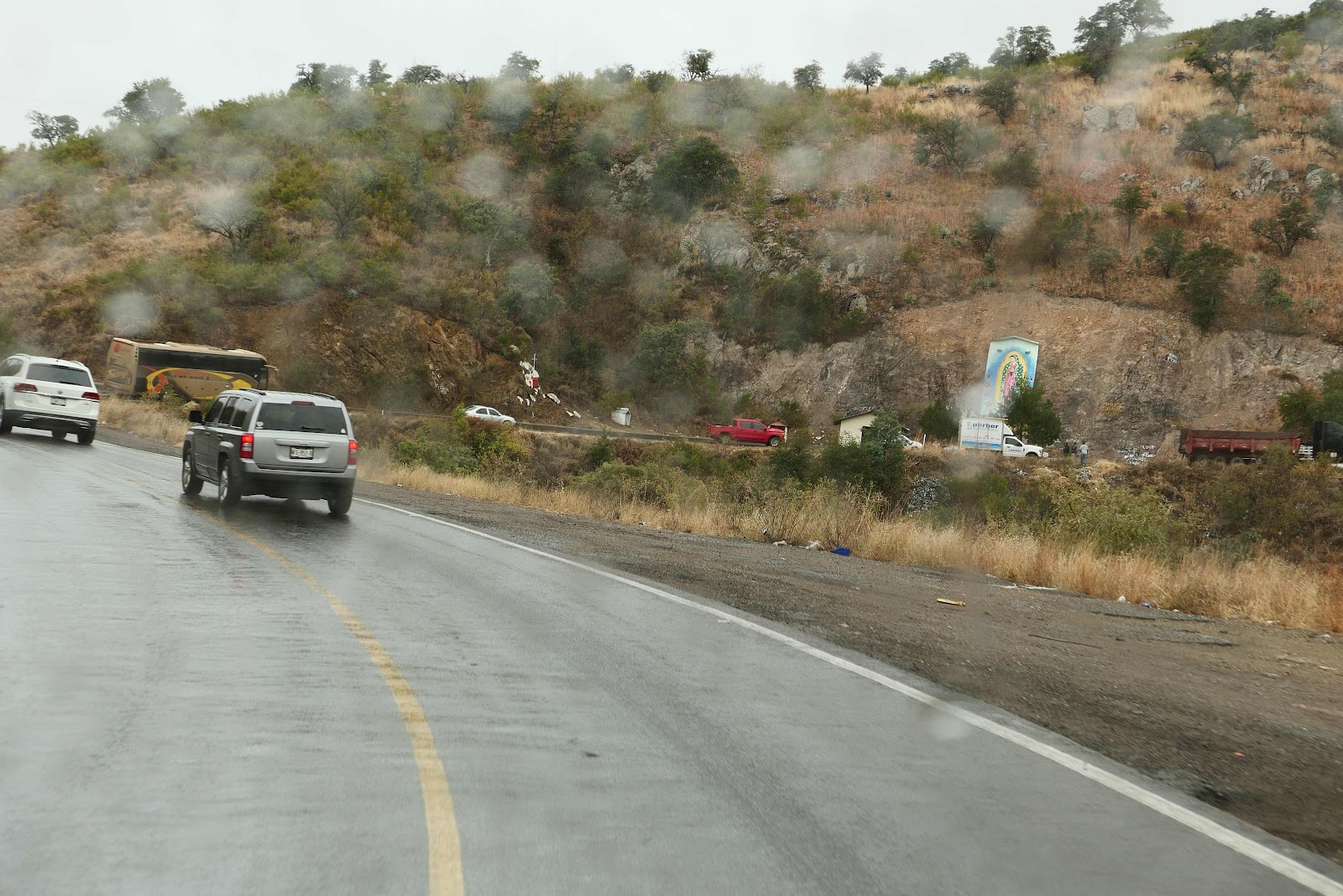 Driving in Mexico is different and I don’t mind it. Drivers rely more on their initiative and less on being told what to do and which lanes to stick to. It sounds chaotic but I saw no road rage even in desperately slow -15mph- lines behind huge 28 wheelers (full double trailers) struggling up huge winding grades. Cars passed when they the way clear, not when yellow lines were dotted. Trucks stopped to let cars out of side streets. It was strangely relaxing when I figured it out. 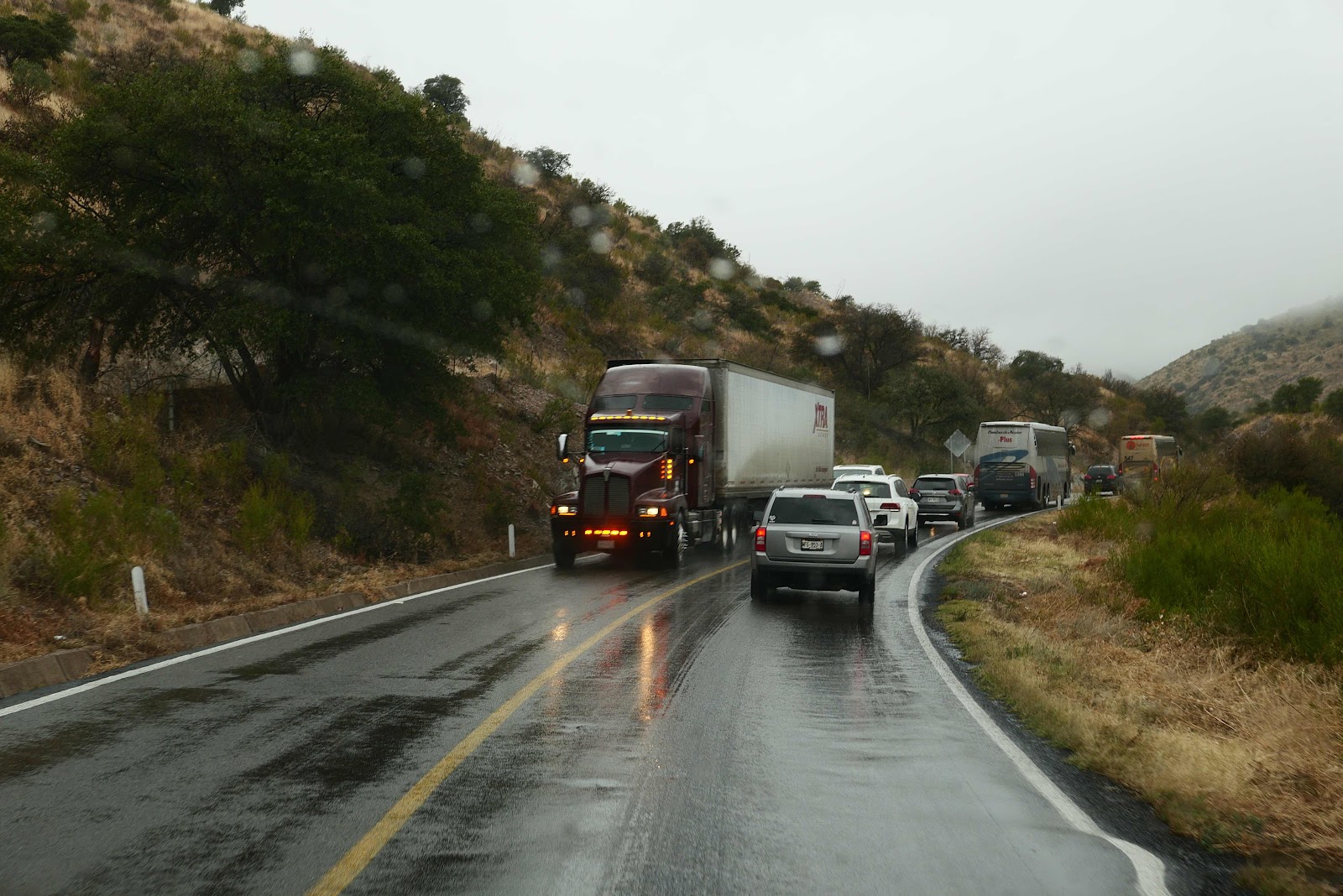 In Imuris, a bizarre town lining a single road with all kinds of small businesses and no apparent central location, we joined the main road from  Nogales where the US tagged vehicles showed up in not great numbers. Never saw an RV all day. This road became a Cuota or toll road and cost eight bucks over one hundred miles roughly. 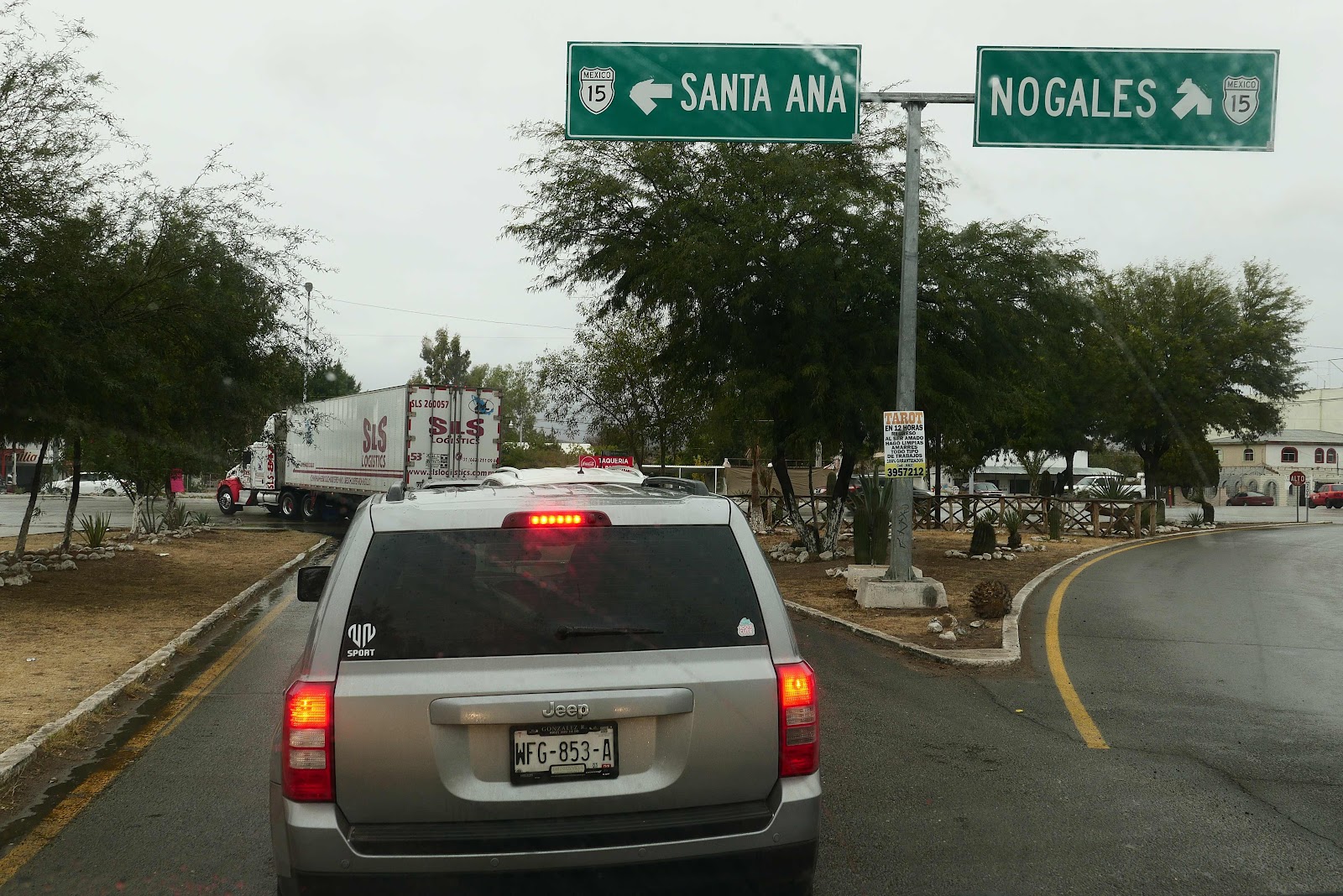 In an effort to slow traffic Mexican roads are littered with “topes” (tow-pays) which are humps across the road placed randomly. I got two at speed and we bounced which did not make me feel good. The best way to spot them is to watch other traffic slow to a halt apparently at random. They are the best reason to not drive at night and to take the toll roads mercifully free of them. 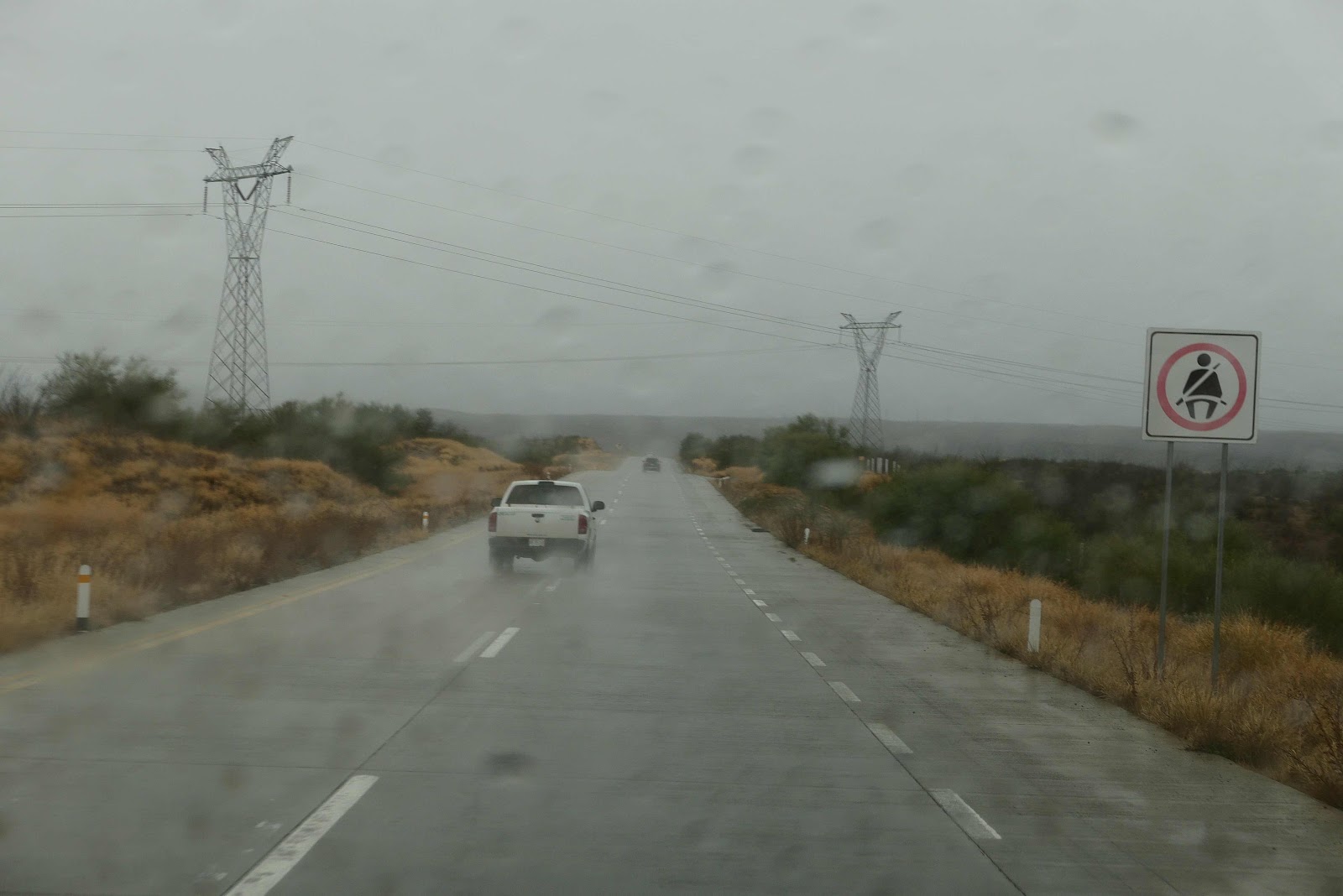 When we came upon a sudden slow down on the highway traffic slowed in good order and moved forward patiently. We inched ahead and discovered there were only two open toll booths hence the twenty minute delay. We paid thirty pesos -a buck fifty- so there was no great damage done to these retirees. 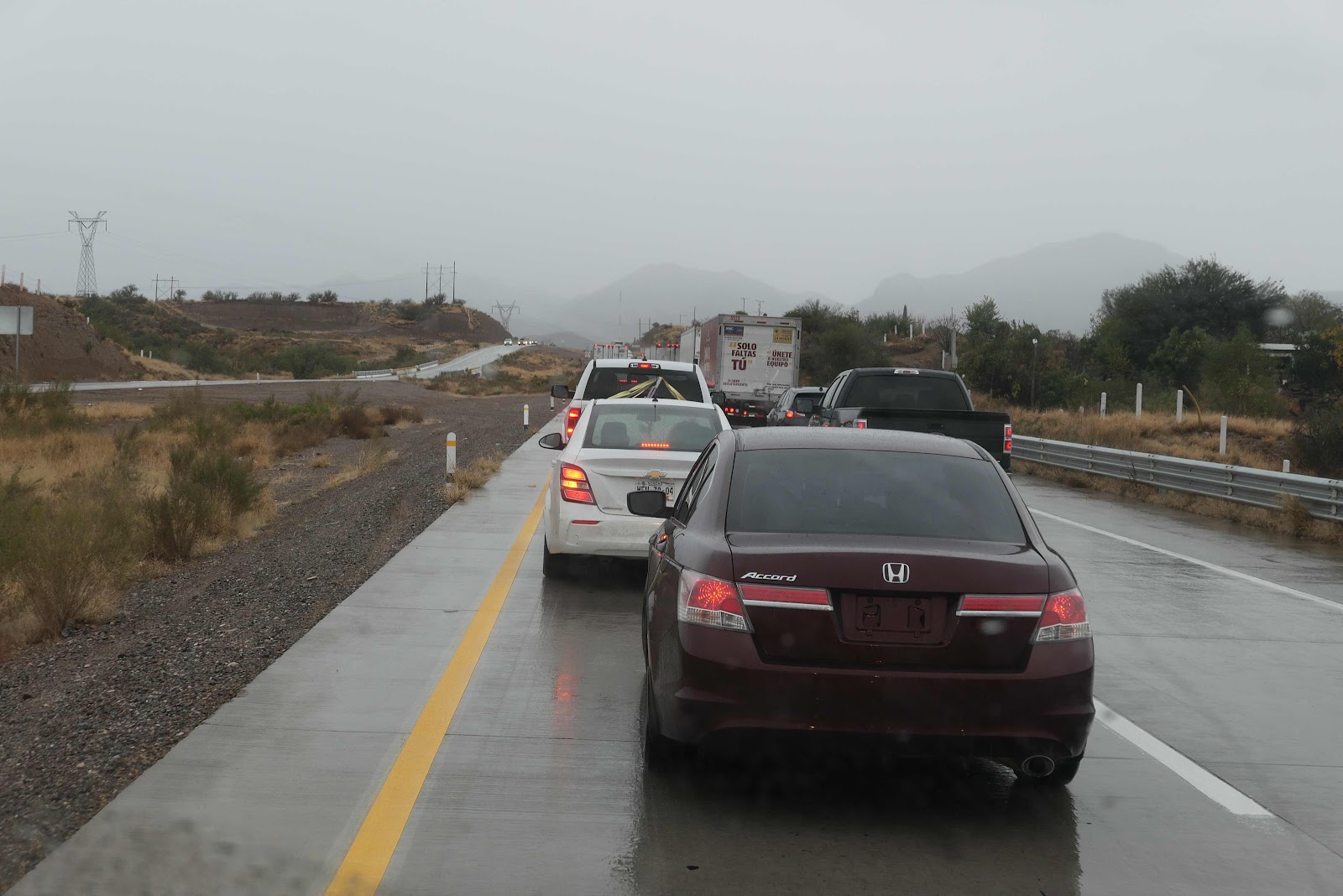 I persuaded Layne to take a nap and she went to bed with rusty and I drove on doing 60 in a 70 mph zone.  There was not enough traffic to clog the highway and not everyone seemed to be in a rush or possibly the four dollar a gallon gas (20 pesos a liter) was worth burning more economically. I got in, it was pleasant driving waiting for the rain to dry up. 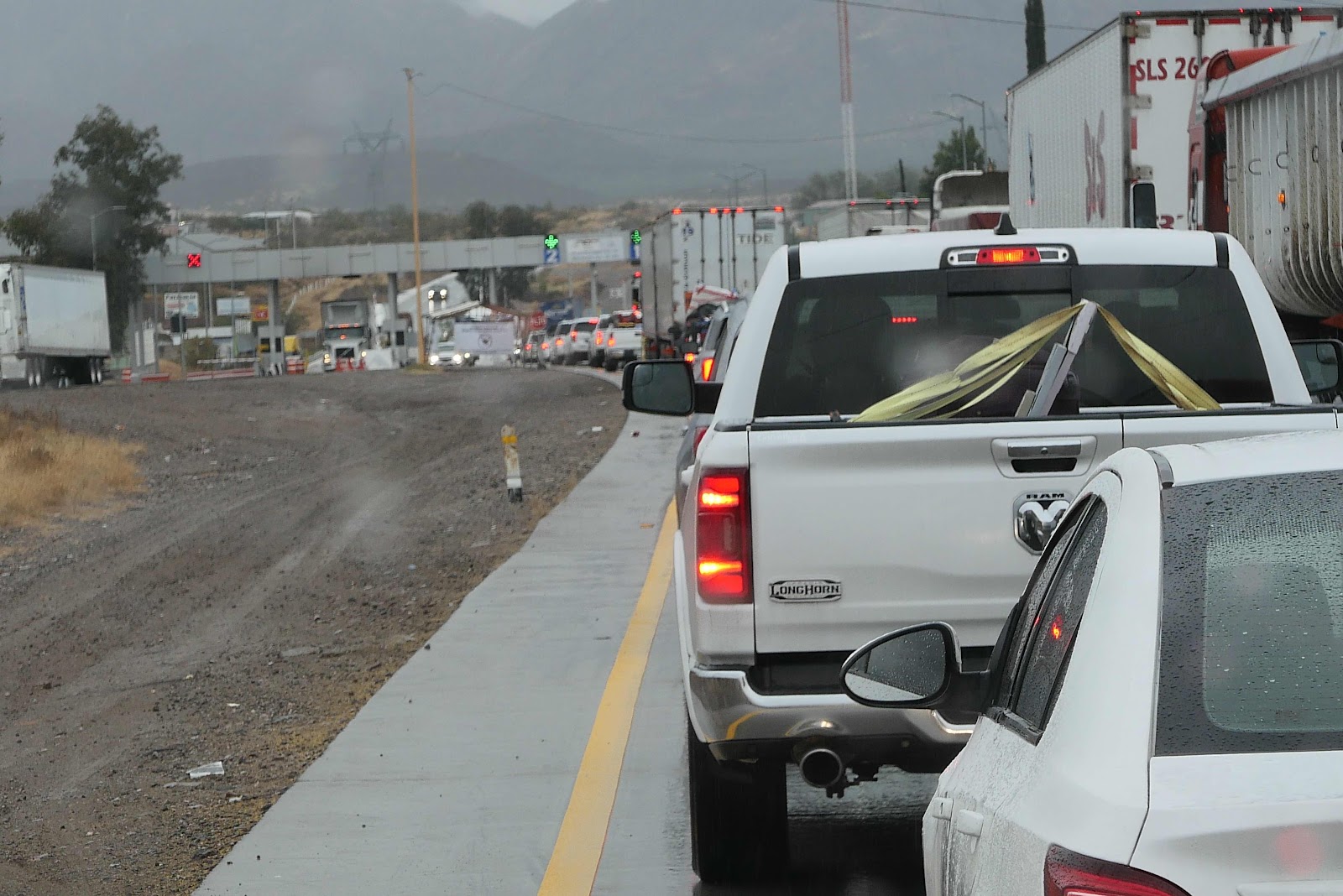 I had seen a couple of truck stops listed on the iOverlander app, one at Santa Ana and the other in Caborca an hour and 60 miles further down the road toward the coast. The first stop looked small and crowded and I figured if we pressed on we could make the spacious stop at Caborca before night. Note the Arizona tag on a truck loaded with holiday gifts heading south from the border. Migrants travel both ways: 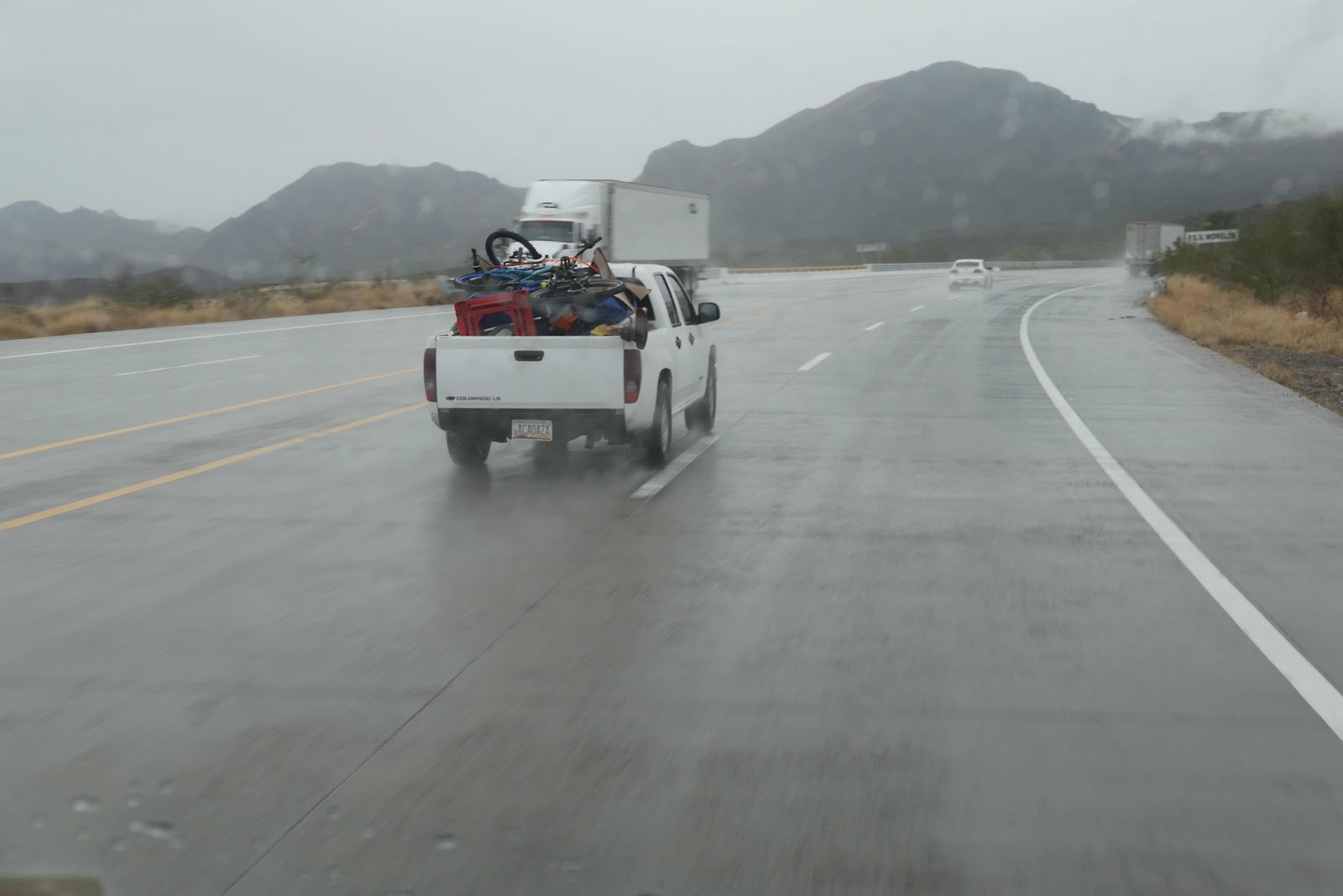 The truck stop was to all intents like one you would see in the US. Free parking they said with food, an American style convenience store and three stray dogs who barked at rusty freaking him out. I got some Pedigree kibbles from the store and fed the strays who wandered off to do their rounds. Most dogs are loose in Mexico but most belong but these guys didn’t. I can’t fix their lives but I can give them food so I do. And make sure Rusty knows he’s number one. 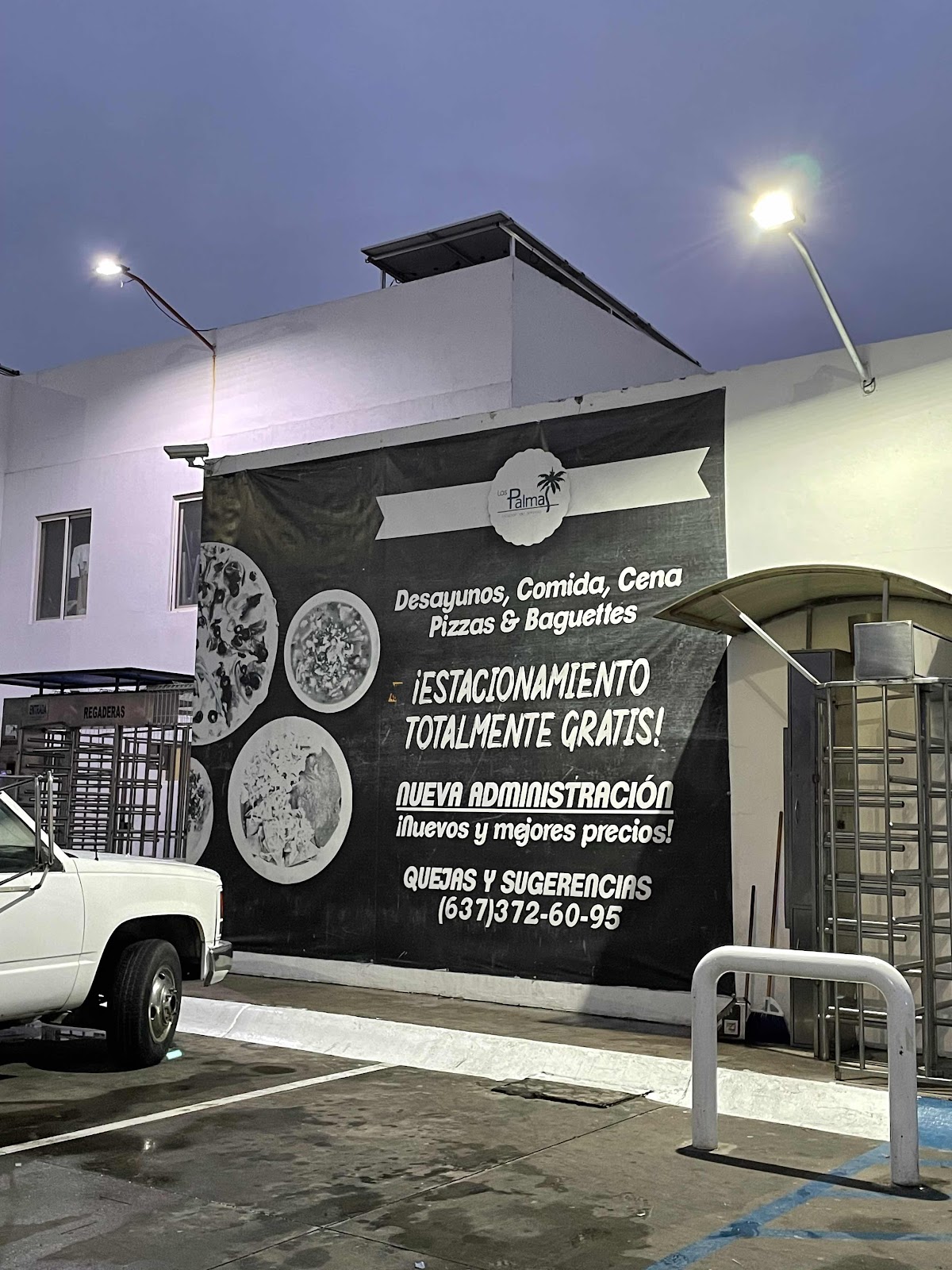 We put the window shades in, Layne heated Trader Joe’s quiches and we all settled in for the night. Traffic noises don’t bother us and temperatures were well above freezing at sea level. 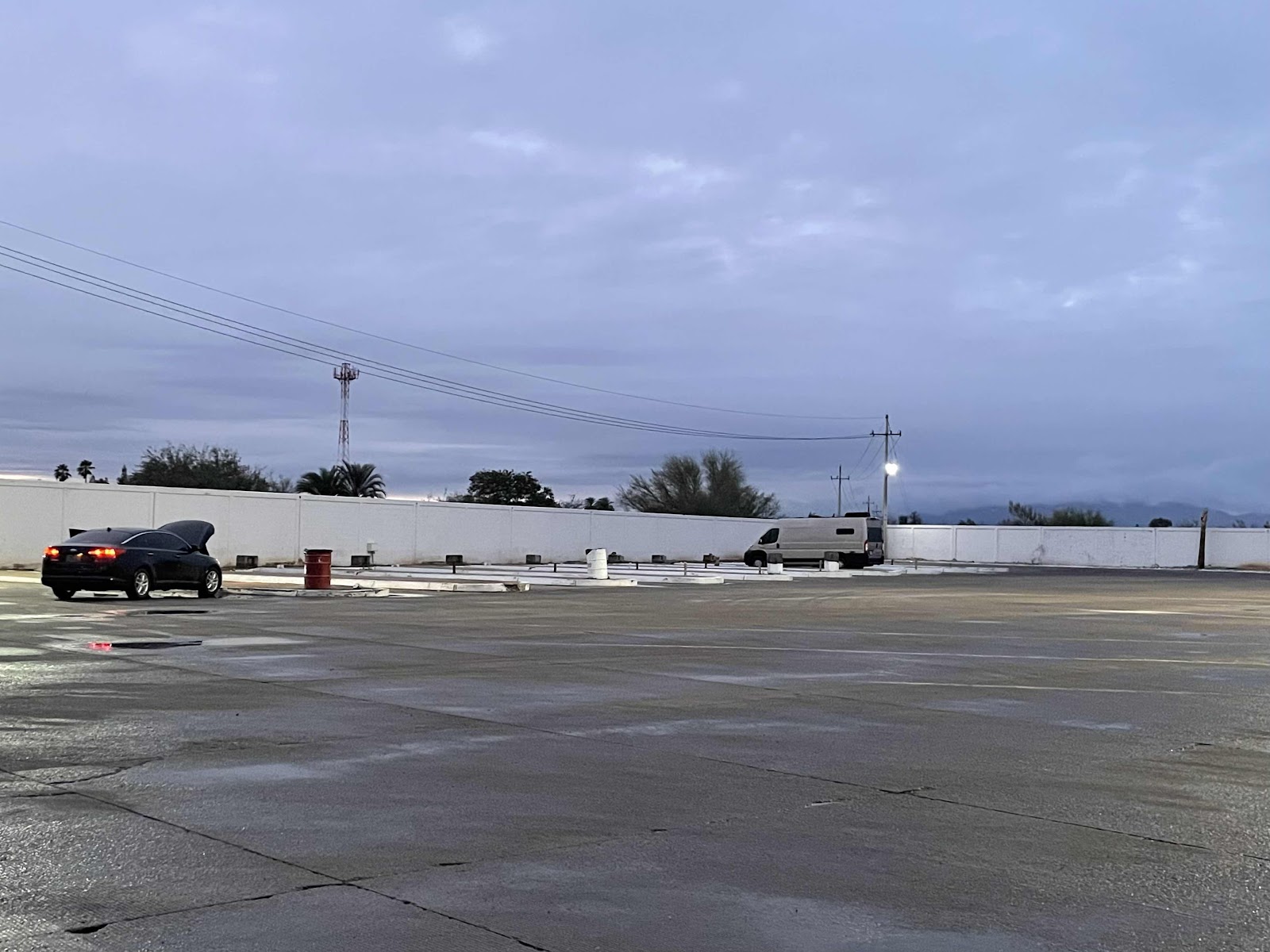 We were 90 minutes from our planned beach stop. A friend turned us onto it as an isolated spot to be away from New Years fireworks to spare our boy. We may therefore lose even Telcel connectivity! If we do we will be back with more stories from the road as soon as we can. The nature of this journey brings with it some uncertainty for which I apologize.
HAPPY NEW YEAR, wherever you are, whatever you are doing, and may you remain Covid-free.
Posted by Conchscooter at 2:00 AM 9 comments: