Next Sunday the United States, as usual following the beat of its own distinctive drummer, makes it's delayed switch to winter, known as standard time. My commute will change, and even though I don't like the switch back one hour each Fall, I am trying to see some good in it. I like dark mornings with more sunshine in the evenings. I see no need to bring the curtain crashing down on daylight at six pm just to  create more daylight in the morning. 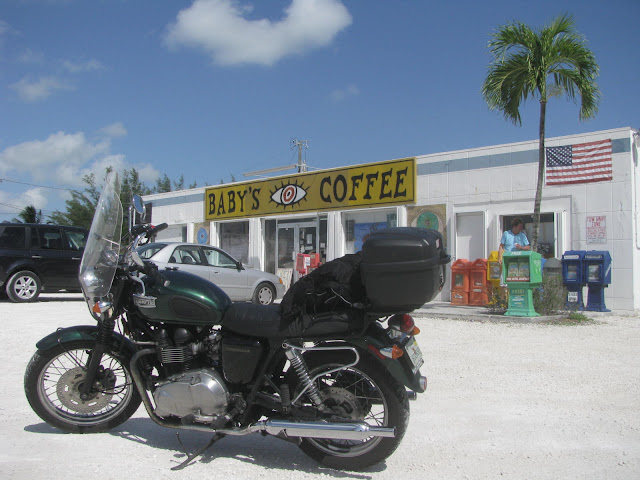 My commute  might be measured as rather boring when you consider not only the absence of alternative routes, but also indeed the absence of any varied terrain. What I do get is year round riding that is rarely cold, by some people's arctic standards never properly cold and is frequently quite hot especially in summer. That makes it easy to put 15,000 miles a year on my 2007 Bonneville. Frankly I cannot see any reason not to ride a motorcycle at these latitudes, for driving a car is a true boredom exercise. 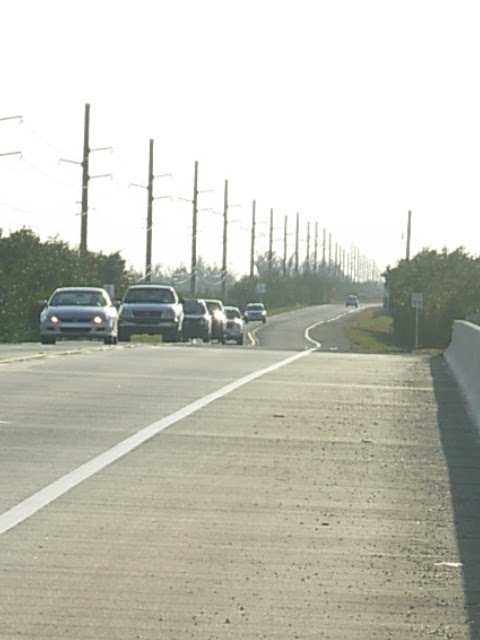 You can see the boredom in the attitudes and abilities of the people I call caged zombies. They sit in line and play with their phones, they get startled when I pass them, suddenly rearing up their bloated cars on their hind wheels frantically trying to keep up, not that they can't keep up as I only ride five or ten over the limit, but they usually get bored, or I lose them the next time I pass. Very few drivers have trained themselves to observe and evaluate traffic flow, to study and measure closing distances, or to take on a passing maneuver with verve and determination. I know where the passing zones are, I know the sight lines and  I ride the sections in between evaluating the determination of the car in front to maintain what I deem an acceptable speed. The more accomplished "cock blockers" like to slow down where passing is impossible and speed up where passing is possible. I don't play the game, I pass and they usually drop back frightened by their own vision of driving themselves to a ticket at 15mph over. Often when I pass a car they ostentatiously drop back as though to say "I wasn't interested in traveling the speed limit anyway."  Thats how I amuse myself on my unvarying commute. That and taking on the weather, riding in the rain, or the wind or under dark skies, each ride a different variation on the monotone Overseas Highway. 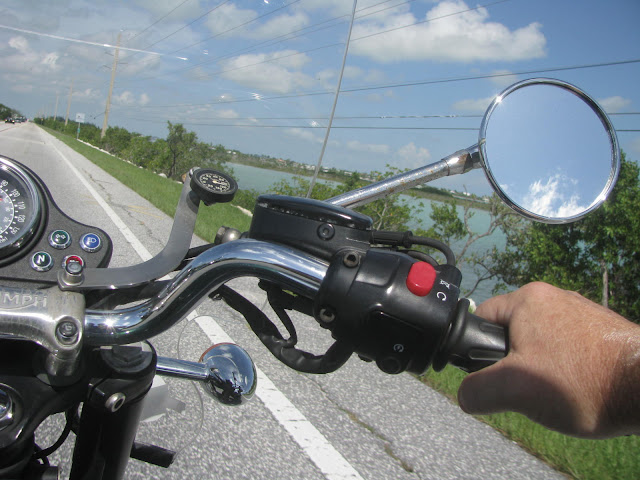 The thing about riding a motorcycle is that you are on an inherently unstable machine, one that gains beauty and poise and even grace when in motion but one one that also does not make any effort to hide the rider from the weather or the consequences of failure to pay attention. Car drivers who never ride motorcycles cannot understand the sensation of flying that comes on a motorbike but they cannot either understand the requirement that a well ridden motorcycle imposes, the discipline of paying attention. I oppose the notion of passive safety when riding as passive tools like bright clothes or automatically flashing headlights induce a sense of entitlement, the expectation that one will be seen and noticed by other road users, and anyone who has driven home in a car and arrives not recalling the journey at all, knows what I mean. It is impossible to ride and not notice the journey on a motorcycle. I am always looking at other drivers, their posture, their use of mirrors, their placement on the roadway, the way their wheels are turning or if I can even make eye contact. 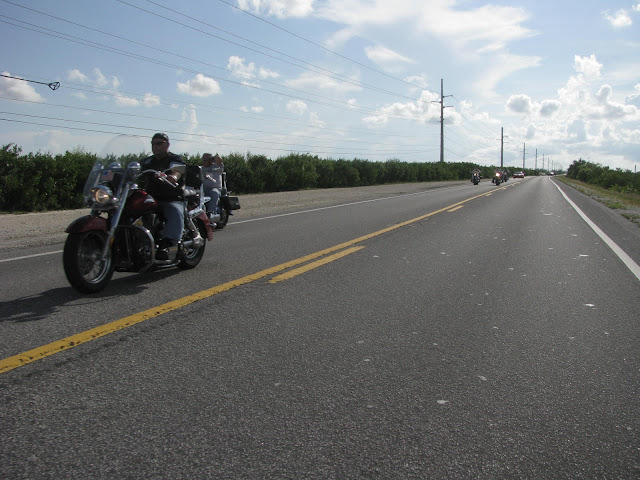 My colleagues have given up questioning me about why I ride in the rain. I enjoy that as much as anything. and when I say rain I mean downpours on my modest half hour commute in a sub tropical climate where hypothermia could only be contemplated on a much longer ride. My waterproofs by Frogg Toggs do a decent job of keeping me dry enough tom work a shift but I don't keep much in the way of winter riding gear, just a padded jacket by Tourmaster and some heavy pants. Mostly I use a free flowing armored mesh jacket and electric warming gear is unnecessary.  I have some handlebar muffs that cover my hands and help keep them dry and out of the wind when I ride, but this place  is really short sleeve weather year round. I prefer wearing my armored jacket to stop clothes flappng and it's predecessor saved my skin on a fall a few years ago in a badly marked construction area. But I am not one to nag riders about what they wear. I wear a helmet but expect each rider to think for themselves. 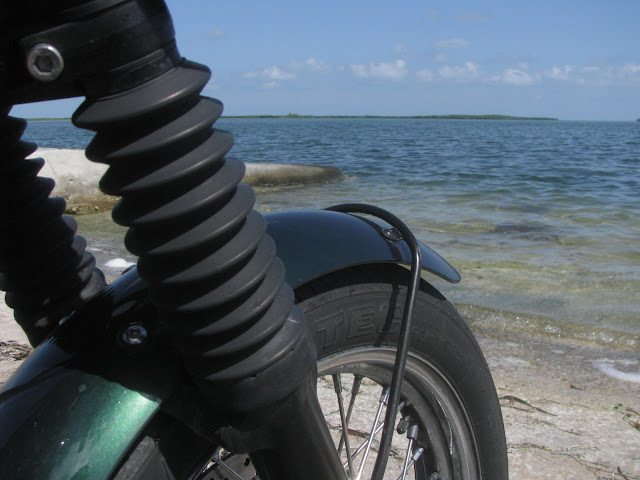 This has not been a great year for riding, and even though I enjoyed our family car trip to New England it did come at the expense of a riding trip this summer. Understaffing at work means lots of overtime, with the same result: less riding. All of which makes me more fanatical about getting on two wheels when I go to work. I love my Labrador but she too tends to limit my rides as she can't come with me and so if it's at all possible I end up making her happy by loading her in the car. I get to listen to the radio more that way as I don't like electronics on my ride. The idea of making phone calls or listening to the radio through my helmet fills me with horror. We live in a world, where listening to the inner voice or enjoying silence is a prospect that seems to terrorize most people. I love the solitude of riding and escaping communication by being on my motorcycle. Sometimes I arrive at work to find texts on my phone from colleagues hoping to communicate before I arrive. I am a rare bird at the police department where among some three dozen civilians (who don't take police vehicles home)  I am one of two riders and the other guy rides half a mile on a scooter to ease his parking woes, not because he is an enthusiast. I cannot conceive why more people aren't unclogging the roads in warm south Florida by riding. I guess they might be were riding not an art rather than viewed as simply a means of locomotion as is a car. 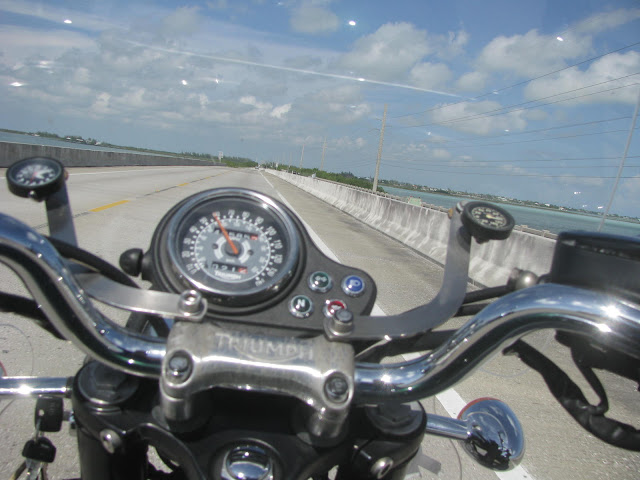 The week of Fantasy Fest I tried to commute by car to avoid drunk drivers but after three consecutive shifts I got fed up. I listened to a lot of Click and Clack on the satellite radio but I missed the buzz of the ride.  In the car I pulled out onto the Overseas Highway from Spanish Main Boulevard and sat in my appointed place behind whichever car I came across. I could pull off a few passes but it is much easier to pass when riding with swifter acceleration and less mass to insert into a line of trundling SUVs. Plus there is something about the car that induces a sheep-like trance on US One. There you are and there you sit. I found myself envying the riders outside, even the Harley Rolling Roadblocks trying to look cool in bandannas at five miles under the speed limit. If I had to drive I would shrivel up and die of boredom. 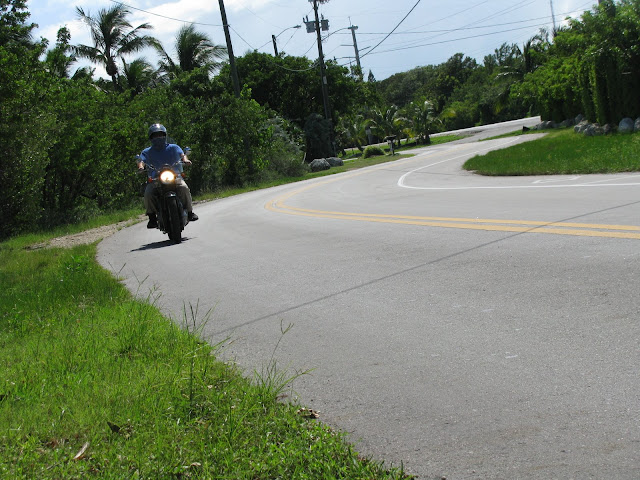 The time change will also mess up my horizons next week. Five in the afternoon when I ride west to work will be much closer to darkness. Indeed I know from experience that by mid December I will be arriving in Key West at dusk or close to, and my day shift colleagues will spend all daylight hours in the office, emerging like moles to a darkened  world. In the morning though I should start seeing some spectacular sunrises if I'm lucky. Right now its black as pitch until after I get home and get mobbed by my dog who is always ready for a walk at six thirty in the morning. Temperatures are down, humidity is down and she is raring to go in the dark. 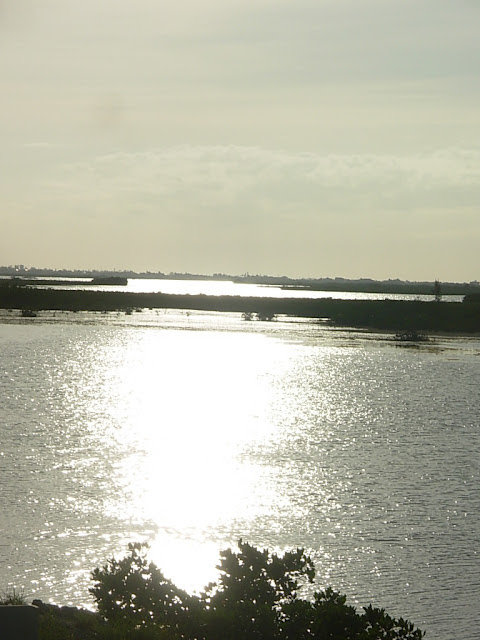 The immutable cycle of seasons, as paltry as they may be compared to places where snow falls and winter brings on the possibility of death and frostbite; the changes are felt here too. I like the change but soon enough I am pining for summer's heat and long hours of sunshine, warm waters and easy swimming...permanent summer seems far away when a cold front brings cold feet and icy riding fingers and a desperate search for warm clothes. 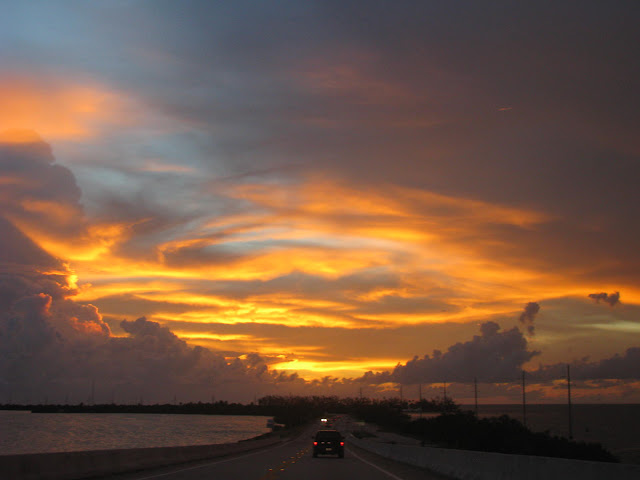 And through it all I ride, and keep on riding every chance I get.
Posted by Conchscooter at 12:00 AM 3 comments: Links to this post