It was not a day of glorious sunshine on the top of the Blue Ridge Parkway, though I with that annoying masculine self assurance that drives women to distraction, assured my anxious wife it was just wind blown clouds scudding over the mountains, not real rain. In point of fact it was the precursor to the sort of biblical rains that they talk about with awe for generations to come. It's not yet August but I dare say already that this will go down in the record books as the wettest of wet summers in northern Appalachia. 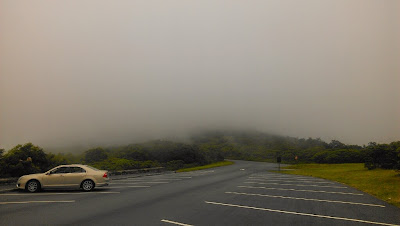 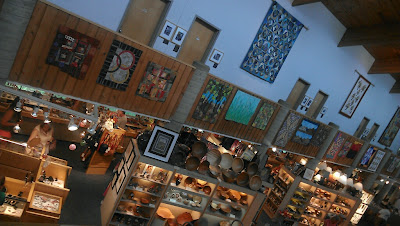 The center at Mile Post 294 is part of the Southern Highland Craft Guild which has five stores in the mountains and I have no idea about the others but this place is fantastic and well worth a stop in their huge parking area for a look. 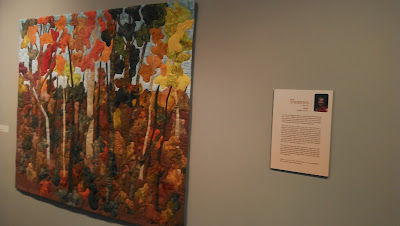 I say that and I have no great fondness for dust catchers but the artwork here spans the range of disciplines and yet maintains a closeness to the source of the inspiration. 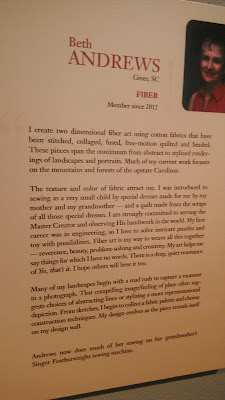 I am no judge of Art but I really enjoyed walking through what is in effect a gallery devoted to interpretations of woodlands, mountains and the lives of those who have lived in these 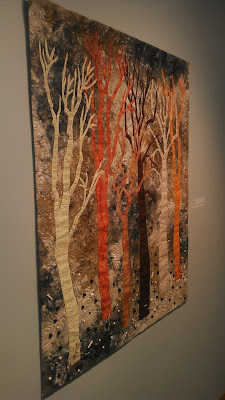 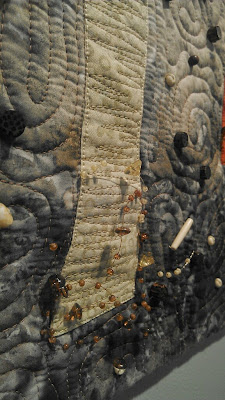 The art comes in all media including stained glass representing the four seasons. 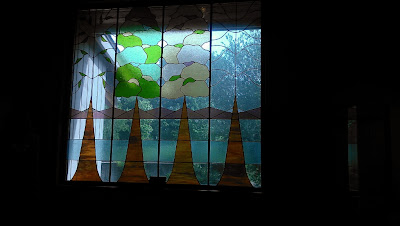 I was entranced by all of it but this next piece made of poplar wood had me standing there taking in the details for what seemed like forever. 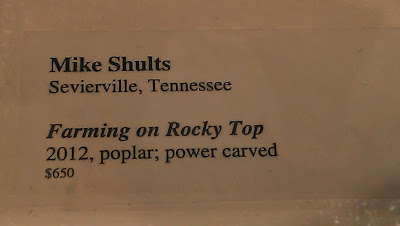 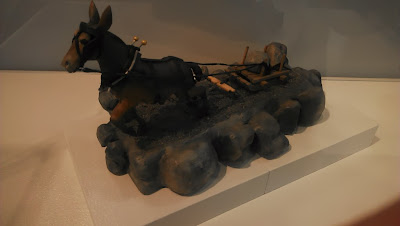 I remember sleds like these towed by oxen in central Italy when I was a child. And I also remember the back breaking labor of phycically remving stones ploughed up in fields that had to be loaded by hand and removed. This was evocative stuff for me. 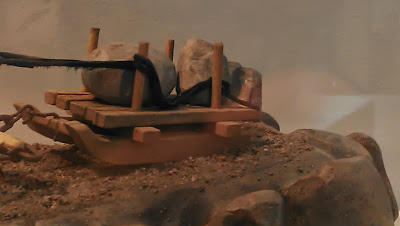 You think of Appalachia before World war two (and afterwards too maybe) and making money on a loom is part of the folklore of this civilisation lost in the woods. 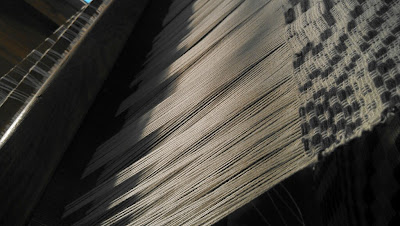 The history of the Blue Ridge Parkway which was officially completed only in 1987 was shown for all to see. It came home to me that the huge financial impact of this Works Progress Administration project started by the Government which hired contractors to build the roadway to plans specified by Government surveyors and architects would never happen today. They claim 16 million visitors a year come to this place, worth billions to the local economy. 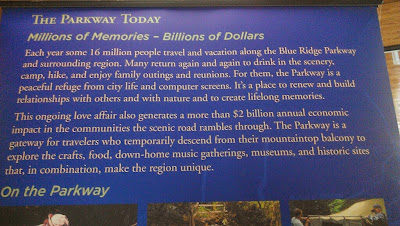 Our leaders today could never bring themselves to undertake such public works to benefit the people of these United States. Furthermore these same people would arise in revulsion if such a public good were suggested by the leader of the Free World. 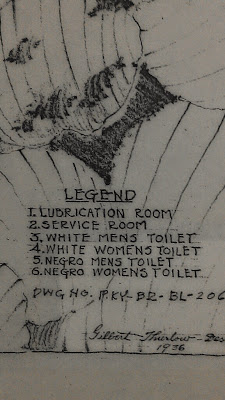 And notice the segregation of the facilities in these plans drawn up in the 1930s- and notice how separate and unequal is clearly drawn into the facilities for white people versus the toilets of Negroes. 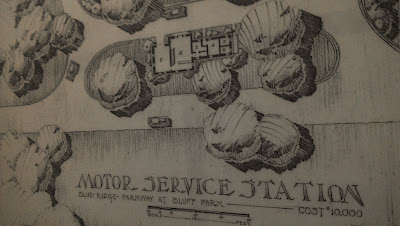 Numbers three and four are for whites, while smaller five and six are for blacks. And it seems race still matters in the land of the free where "all men are created equal." I have come to understand over the years that one major stumbling block to health care reform is the fear that "those people" will benefit, where "those" people are which ever group is the despised race, sect, or minority of the day. Fate spared me from growing up in a culture where government segregated the races so I tend to be slow when it comes to recognizing those unstated cultural indicators. I see "whites only" signs in museums and they appear to me as alien as "No Jews" signs in photos from the Holocaust. 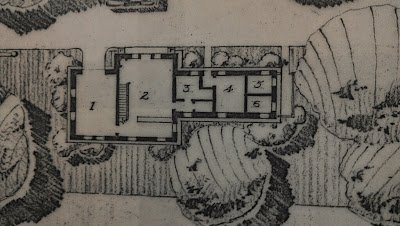 Happily the architecture of the Parkway is less toxic and is actually fascinating to see how beauty was combined with longevity. I am struck by how public works from a hundred years ago looked good, and worked well. 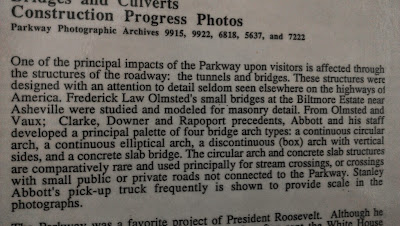 Further down the page I have a picture of these arches that are as functional and apparently strong today as they were when built. 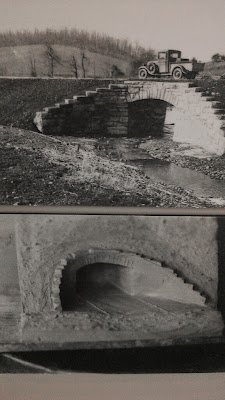 On the Art front I approached this apple from the other side and was enchanted when I saw the slice cut and the seeds in the middle looked like cherries. How does an artist imagine such a thing? 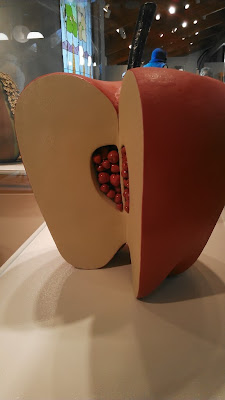 The art is for sale but three grand? They need some one percenters to come through here. 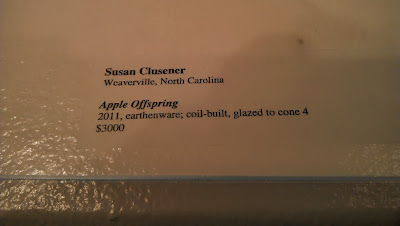 Great stuff but a three foot tall pear half covered in flowers needs a space larger than than my 750 square foot home to accommodate it. If the pear comes the Labrador goes; ie: no contest! 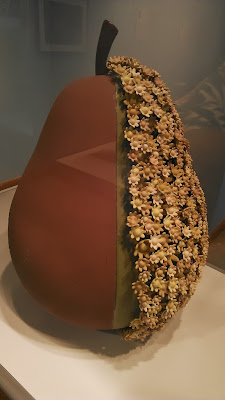 Quilting is a great Appalachian tradition Quilting The Appalachian Way, Article - BellaOnline Forums and there were a few examples on view. 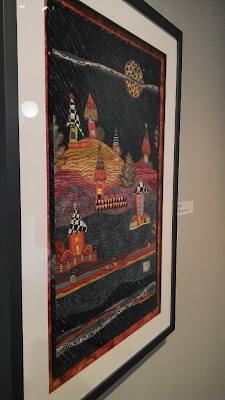 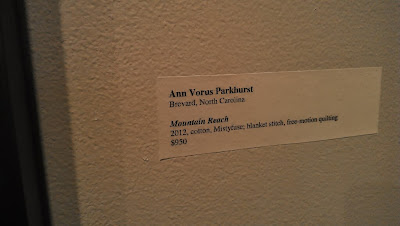 Let's face it, you're on the Blue Ridge Parkway enjoying the road, even if you are stuck in a cage, and you don't want to stop for anything so you slide past the folk thing hoping your spouse doesn't notice. That would be a mistake. 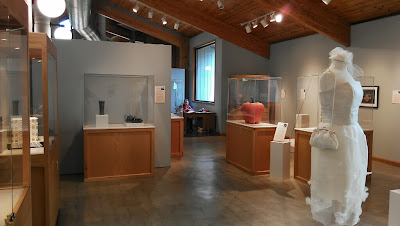 They have tons of shady parking to keep your Cheyenne happy and if you are riding none of your hard core, bad ass biking buddies need know you had a good time looking at pansy folk arts. this is the America you need to think about when politics and day time TV are driving you crazy. 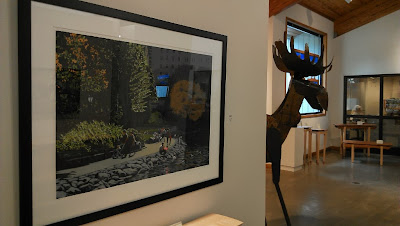 This wouldn't be my blog if Cheyenne didn't have a corner of the page. This blog is about life in the Keys but failing that my fall back position is a reminder that dogs like life as much as we do and travel broadens a labrador's mind. Sixty degrees in July! Cheyenne's heaven! 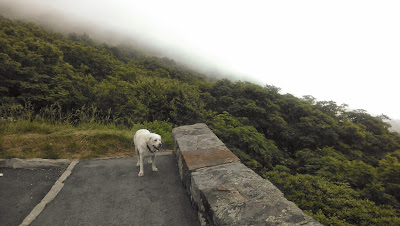 Rhododendrons come for the mountains in Northern India where temperatures are not at all tropical so you know a furry fat Labrador is happy here. Wandering on the ridge of the Blue Ridge was her reward for being as patient as ever at the Folk Art place. 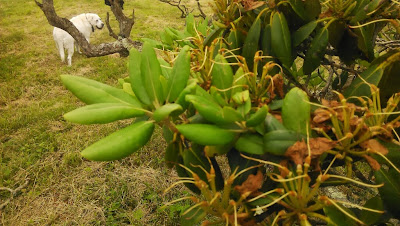 I could not fail to show at least one panoramic view of this gorgeous place. My great disappointment of 2013 is no plans for a motorcycle ride in the mountains this summer. 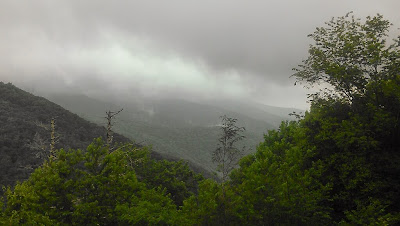 And here is a picture I shot on the fly of that archway architecture dreamed up in the 1930s. 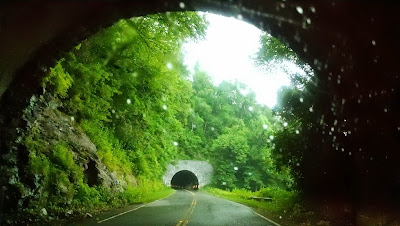 How cool is this tunnel stuff in this jungly place? 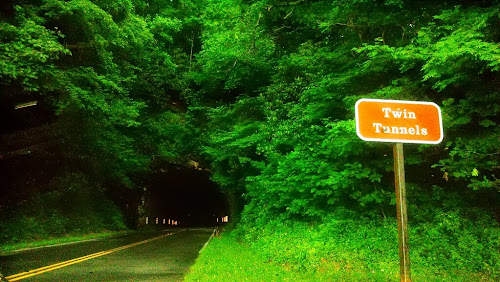 And some lucky bastard was cruising the Parkway on two wheels.... 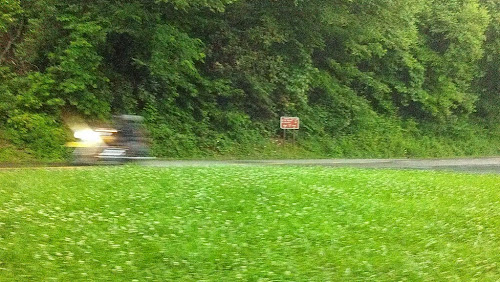 ...mind you this has been the wettest summer ever in the mountains so perhaps a Ford Fusion was exactly the right vehicle to visit the mountains this year! We had fun in any event and that's all that matters.