This log entry finds me near Pflugerville, east of Austin, on an overcast warm humid morning. We are told the weekend will see strong winds, rain and cold temperatures ushering in a strong cold front. It won't be that cold we tell ourselves looking at forecasts down to 35 degrees at night. We are used to it. We shall see. 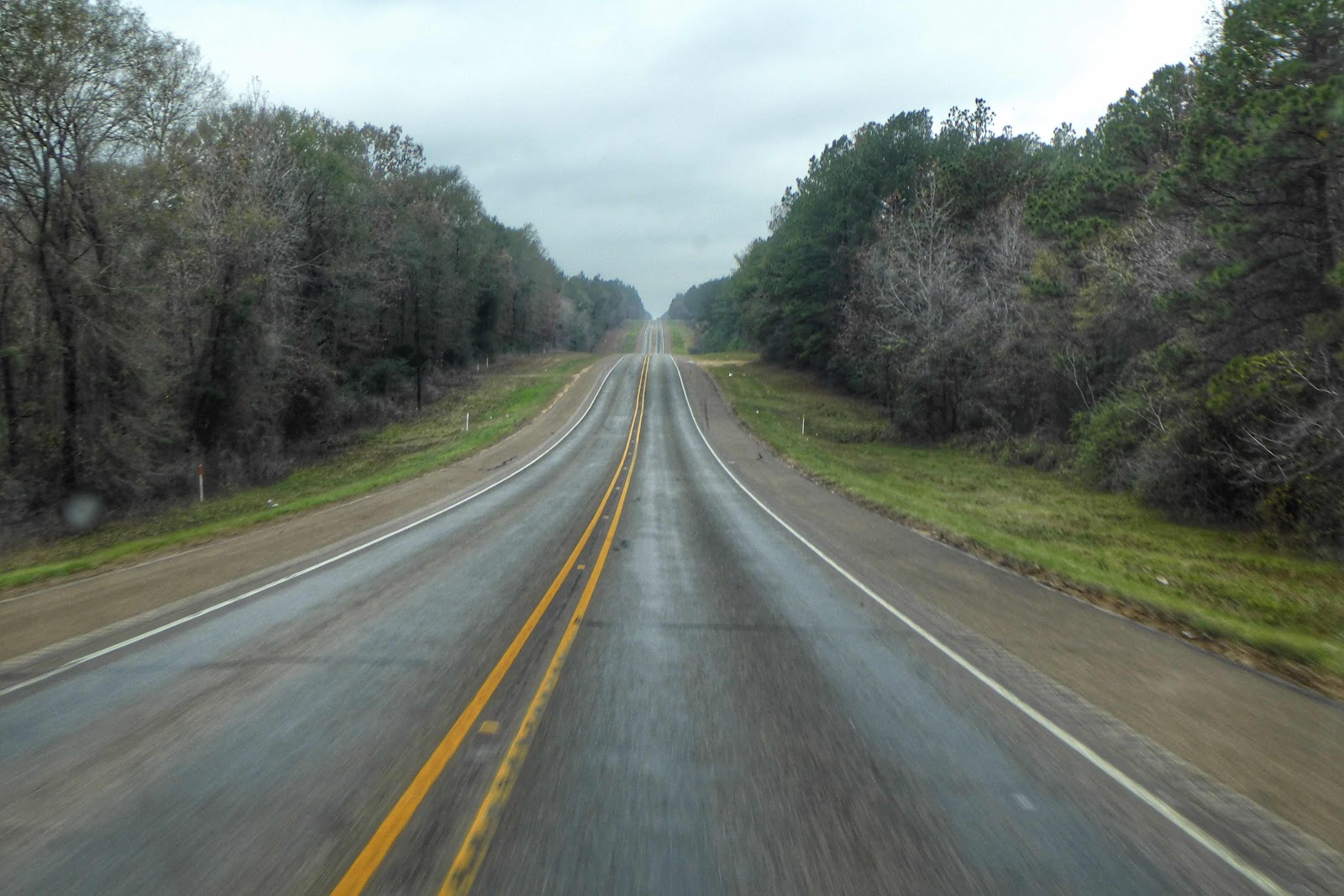 Our journey to the capital of Texas took  us across the state by Highway 79 and Highway 54 mostly, a rolling flatland of farms, hedges, trees still dropping leaves and trucks, lots of big fast trucks. There were scenes of stark poverty, moldy trailers going green, some under tarps, inhabited because the family car was parked next door. 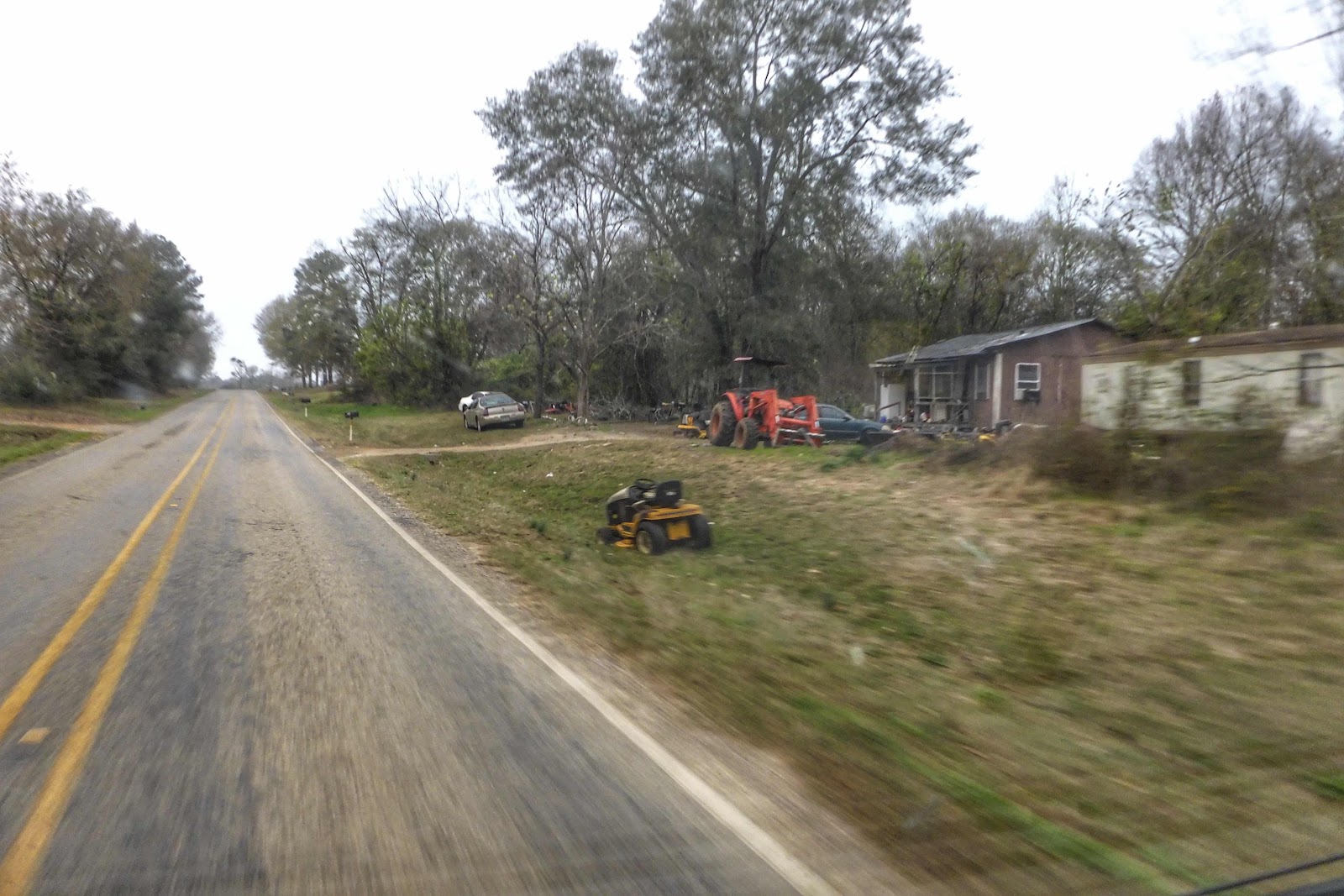 As always Gannet 2 stuck to the program and we kept rolling at 65mph and some gas mileage between 16 and 18 mpg. Layne uses gas buddy, a discount card to find cheap gas and we filled up in Shreveport at $2:64 a gallon and later in Lufkin we found gas at $2:79 and filled half a tank. Most gas stations advertise at $3:30 or more which I think will seem inexpensive compared to what awaits us in Mexico and California. 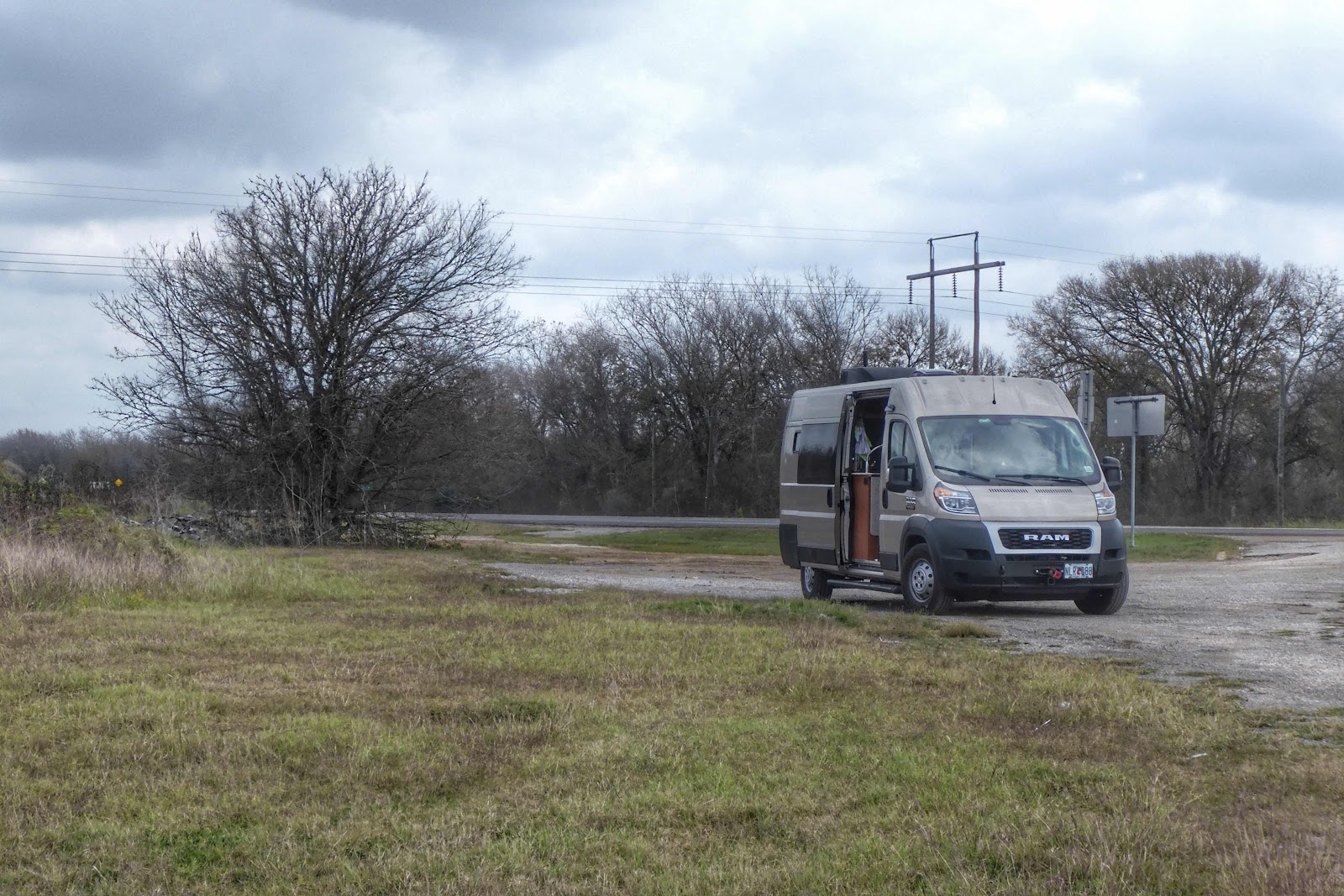 Layne also got the Libby app which allows us to borrow library books at a nominal charge and we have been listening to a detective novel set in New Orleans in 1984 in the noir style of Dashiell Hammet and delightfully set in its period with much discussion of the civil wars in Central America and not a cellphone in sight. 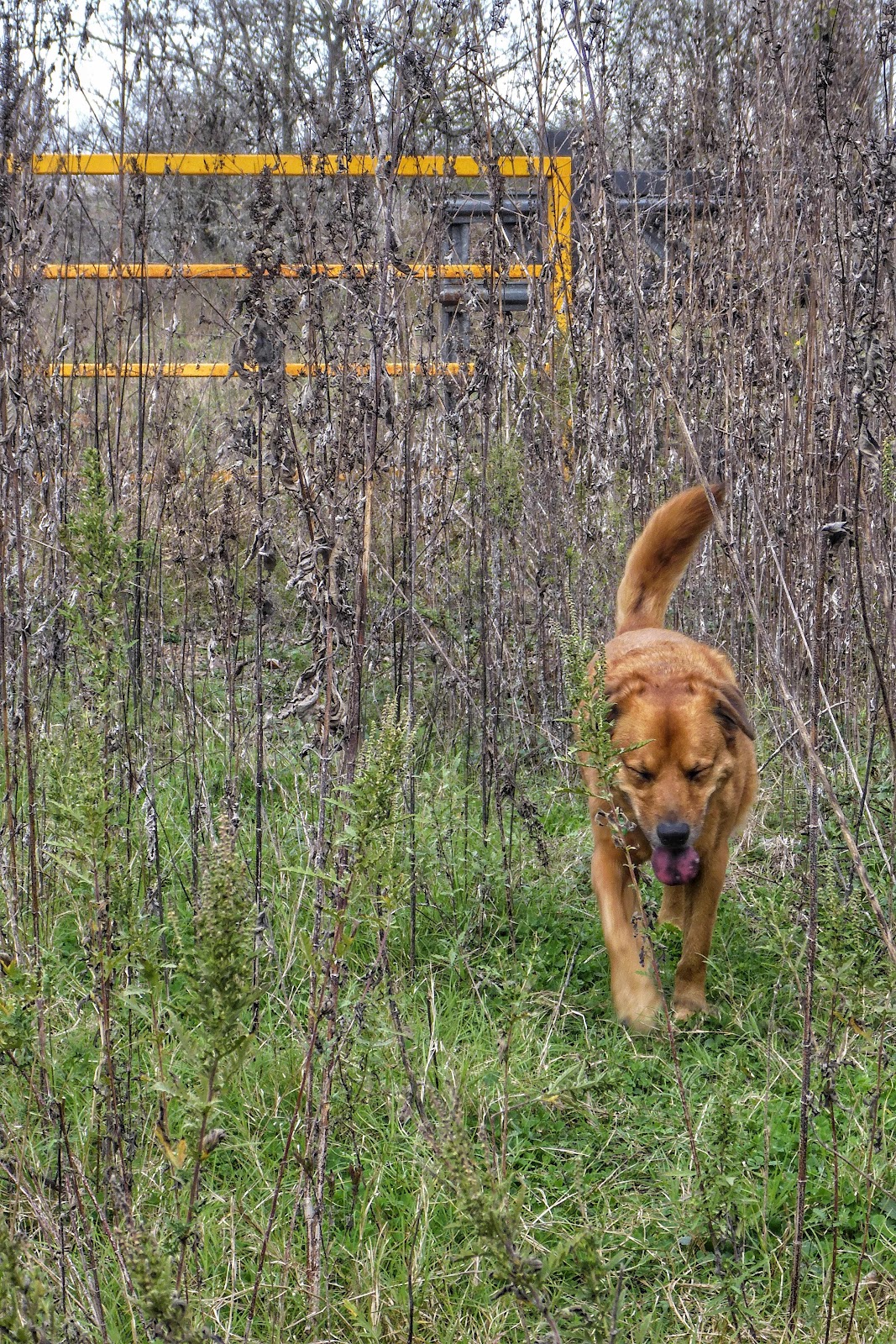 It is a serene and untroubled existence and makes me think we might be good candidates for a journey to Mars, suspended in time and space away from the daily annoyances of workplace and news space and people "vexatious to the spirit" as the Desiderata poem much circulated in my youth used to have it. 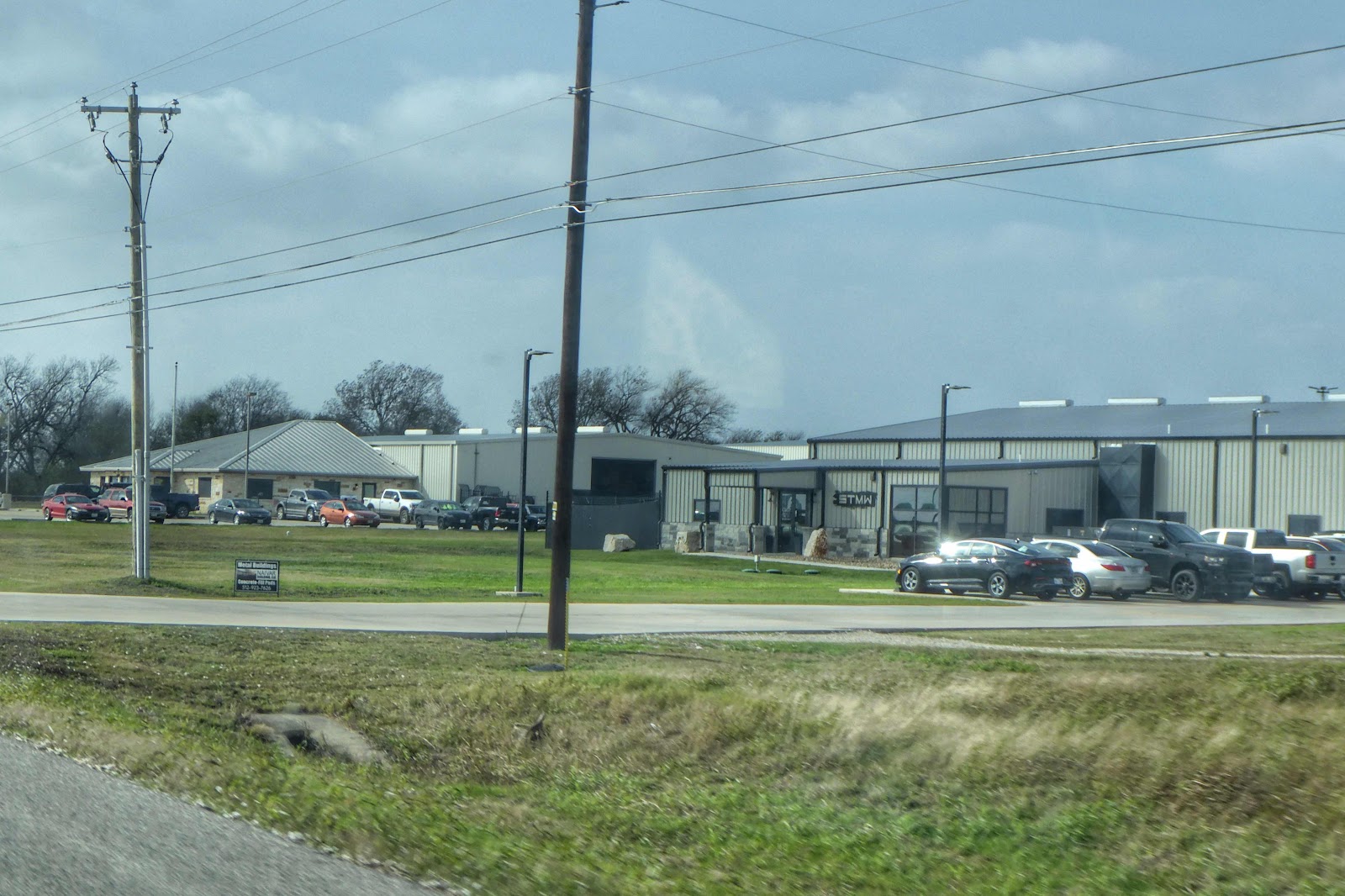 We did manage to find a rural traffic jam after we stopped at the Target in Pflugerville. There we picked up some shopping brought to us in the parking lot, Covid style by an eager youth. Then we drove to the country to find our camp for the night, and the tiny road through the fields was blocked. I was ready to sit in traffic and drink a cup of tea but the locals were making u-turns and fleeing the scene. I found a pull out, turned the van and we made our own detour. Thank you Google. It was a path of much rumbling and shaking and some truly weird death defying cambers on the back roads but we ambled through the afternoon sunlight, detective Dave Robichaux in New Orleans silenced in his pursuit of ex-contras killing people. We had to concentrate to find our way through these back roads. 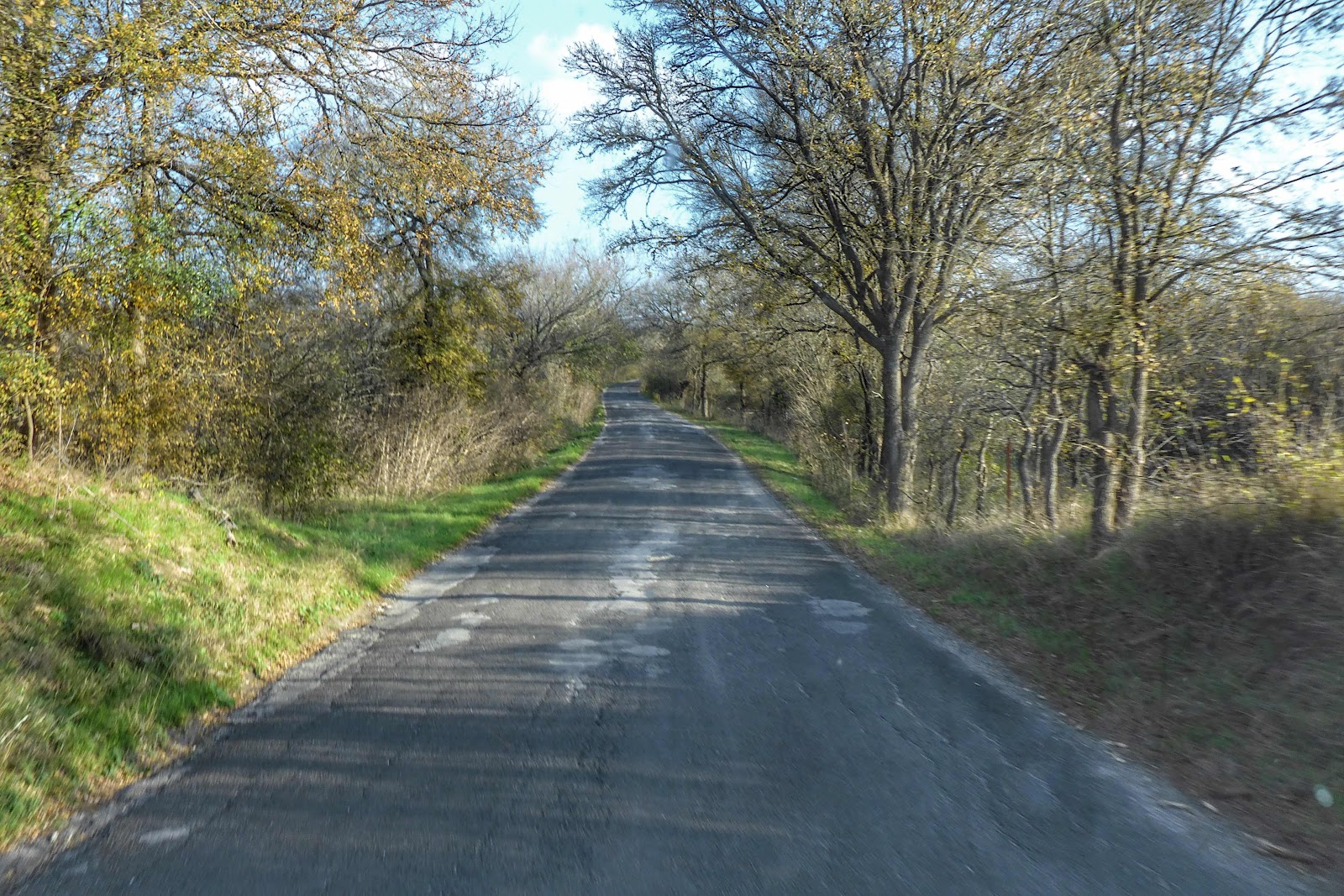 Dell's Favorite Texas Olive Oil was our destination, a Harvest Host. These are small businesses across North America (I mean to include Canada) that invite RVs to spend one night, no hook ups expected, no facilities and all for free. In return one learns about the business and you buy a product to support them. A brilliant program offered obviously though an app and never a misfire. We call ahead maybe a day or so and see if they have an opening and then show up and get a tour. We have a cider and a desert tour planned for next week. 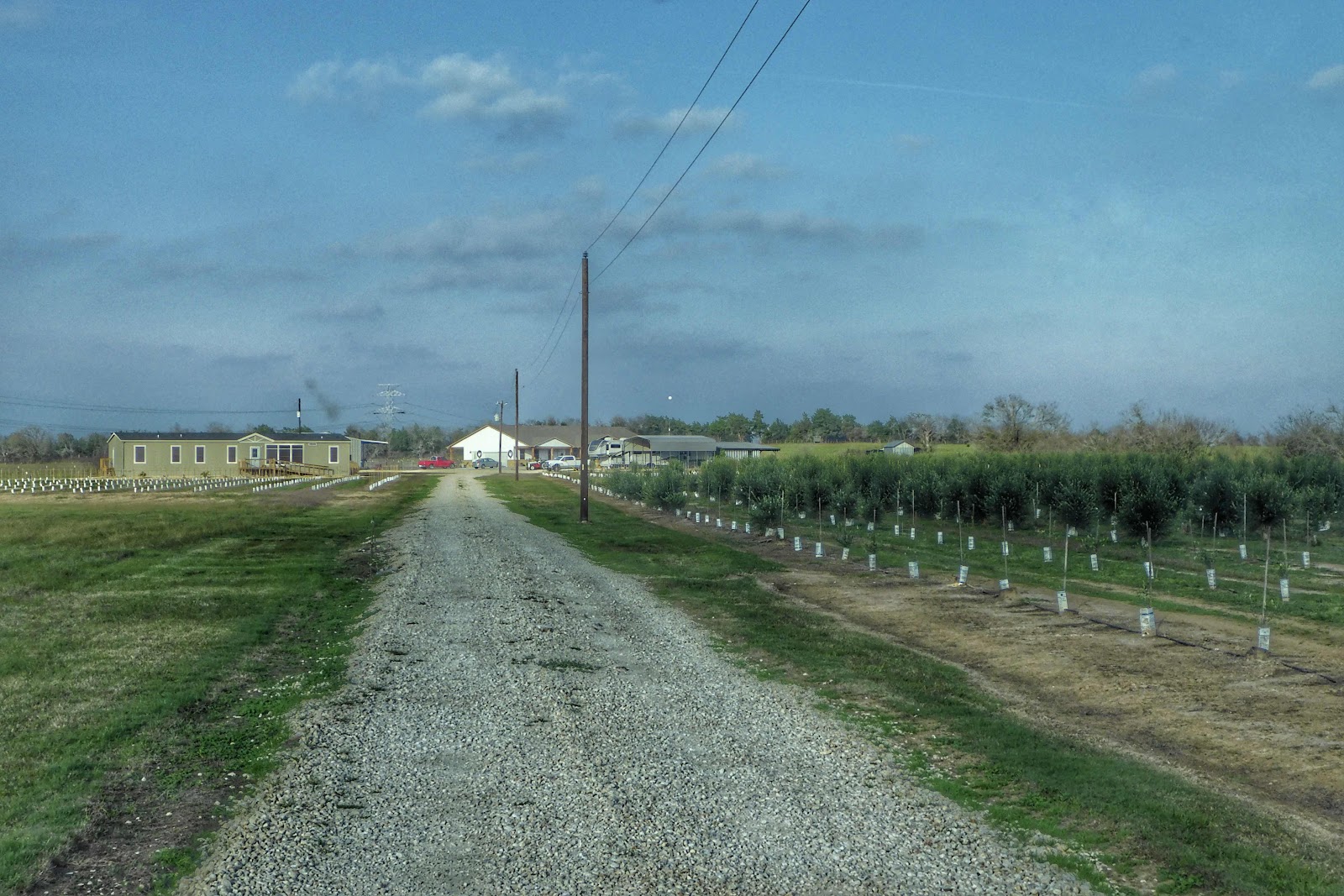 Frank told us his story of transformation from Executive Chef to Oil Man. He spent 43 years working at Hyatt convention hotel kitchens and his wife insisted they figure out a new path for him in retirement as he, unlike me, would go mad with no obligations and nothing to do. 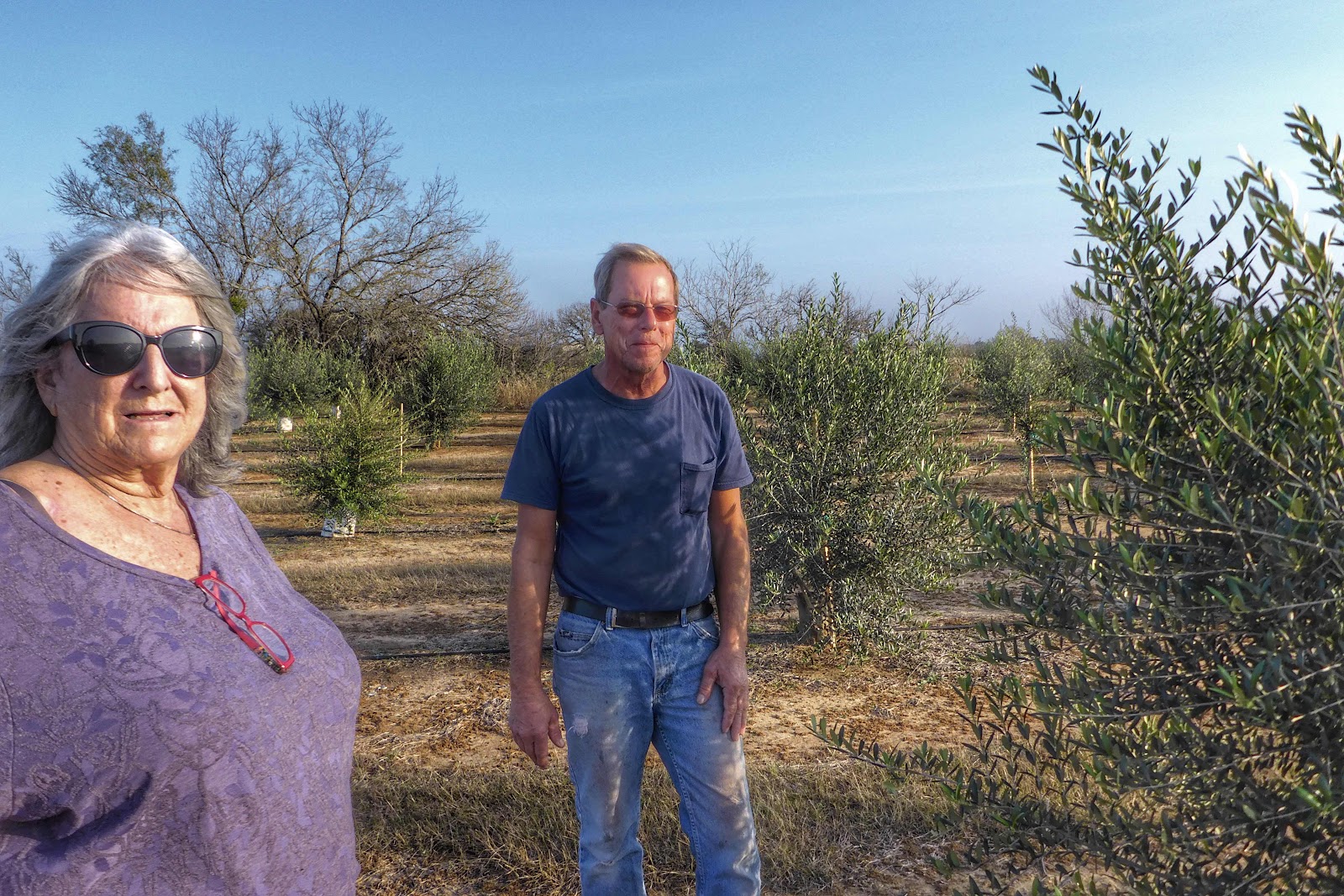 They had friends living east of Pflugerville in Elgin more precisely, and the friends knew of 30 acres for sale nearby. Their home in Houston sold unexpectedly fast so they, their horses cats and dogs all decamped to their new field and lived in an RV while they sorted out the retirement plan. Balls of steel in my opinion. 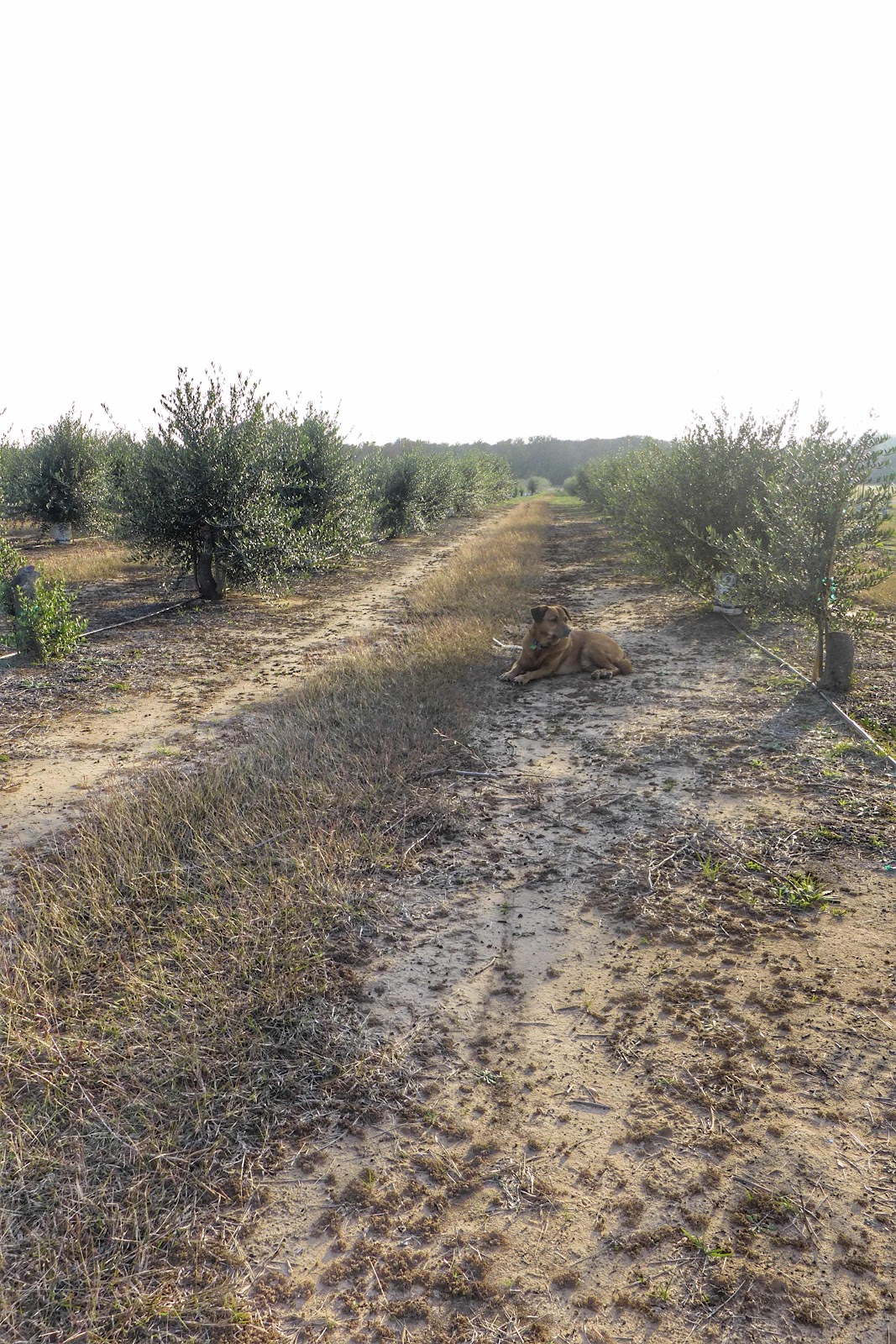 It turns out there are 260,000 olive trees in Texas and Frank's is one of the smaller ones at 1250 plants. They had a massive unexpected frost this February which killed off a lot of their trees and they had to order a whole lot more from California. There trees come as little twigs and two years later are producing oil which I find amazing. The oil is light and buttery and quite deliciously smooth. Frank has found his calling. 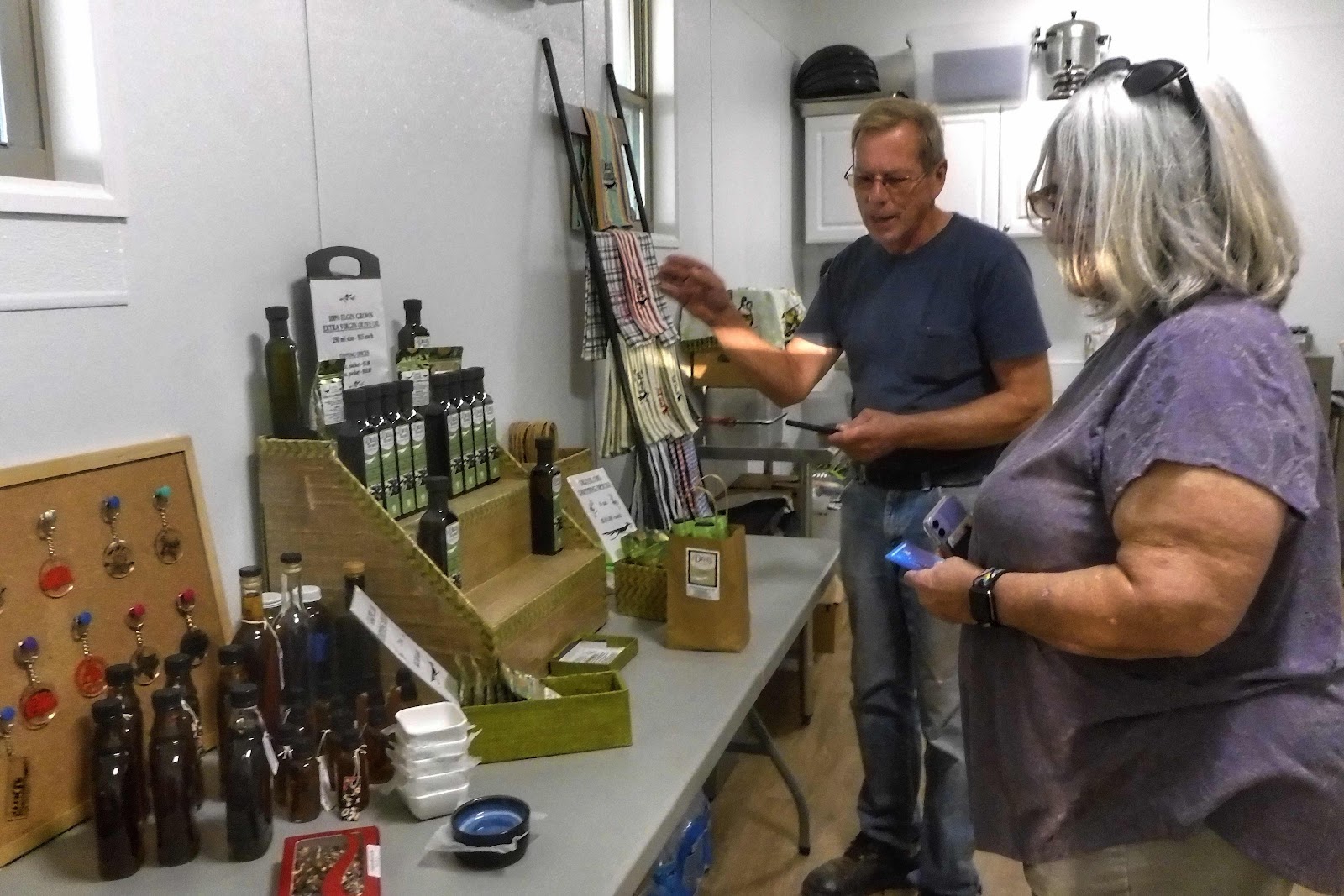 It was a carefully planned transformation to turn a chef into a farmer but as Frank sees it being a chef was hard work yet a lot easier than farming. You can't argue with nature and stuff happens that a chef can manage but a farmer can't. A chef switches suppliers if a product isn't available, a farmer watches drought or frost destroy a crop. He seems to thrive on the challenge and after living in 14 different cities during his career and cooking all over the world an olive oil orchard near Austin seems to suit him fine. His wife says they have built the home she will die in. 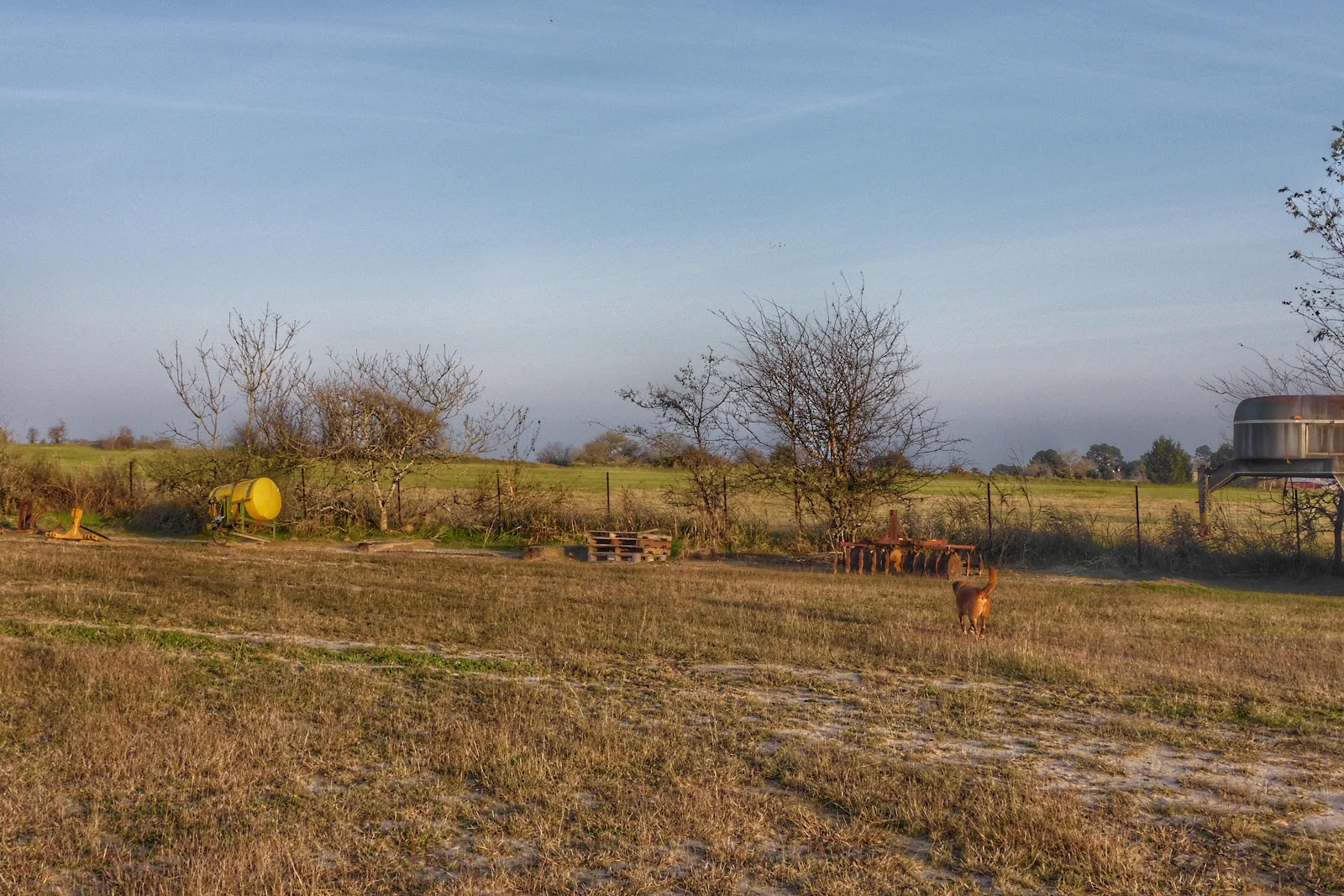 Traveling like this doesn't inspire me to want to go back to a farming life, but it does allow me to enjoy the ways others have found a bizarre and perhaps unexpected calling to fulfill. For some of these Harvest Hosts they have finally allowed themselves to do what they always wanted, while others like Frank stumbled on an unexpected new life. 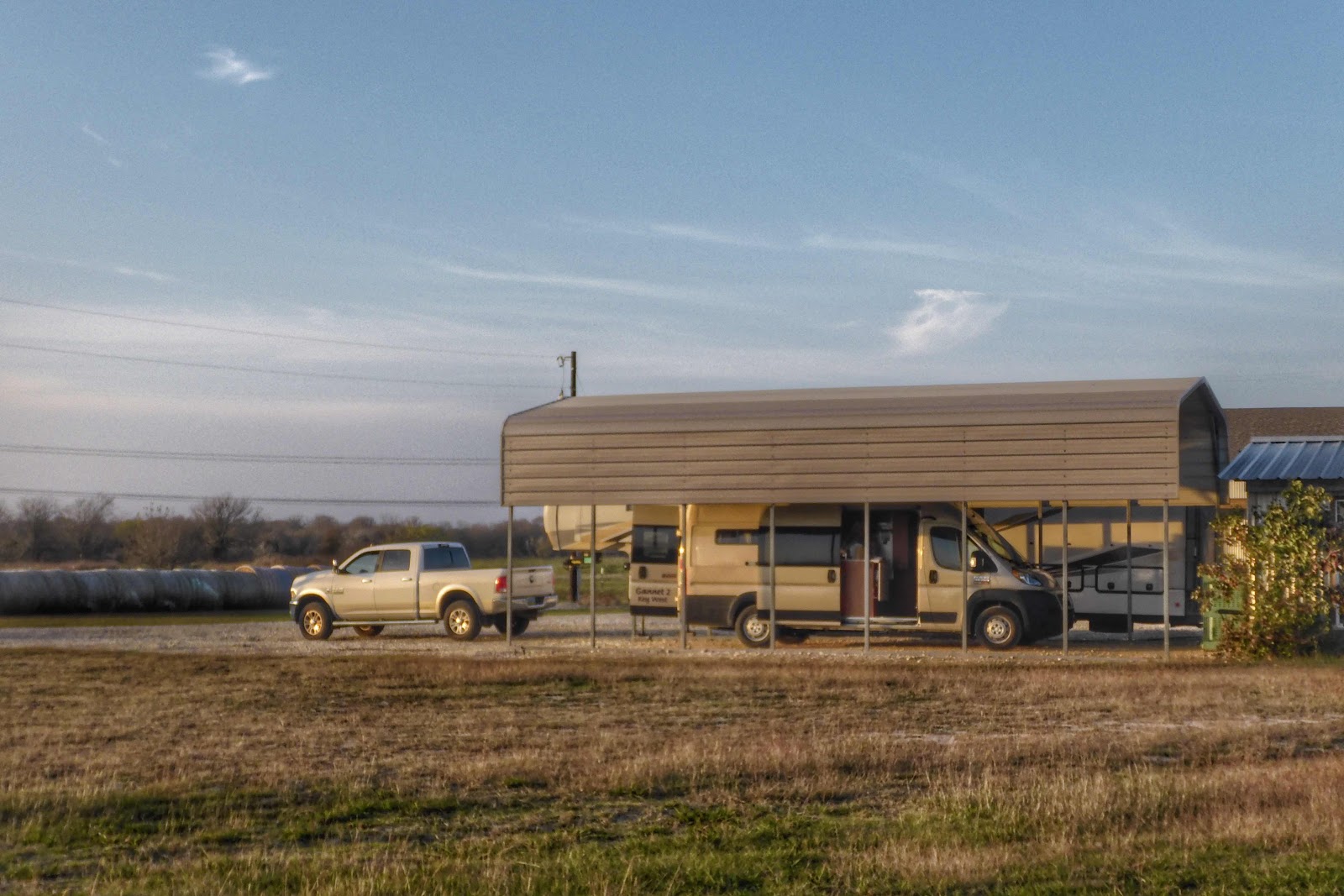 He isn't alone as there are others around him growing olives and one of his neighbors wanted to control her own oil press so she bought one in Italy and got an Italian expert a visa to come to Pflugerville and press her olives for her and her neighbors. This is a whole sub culture developing here and I doubt any of the oilmen, tourists, students and native born people flooding the state capital nearby have a clue. 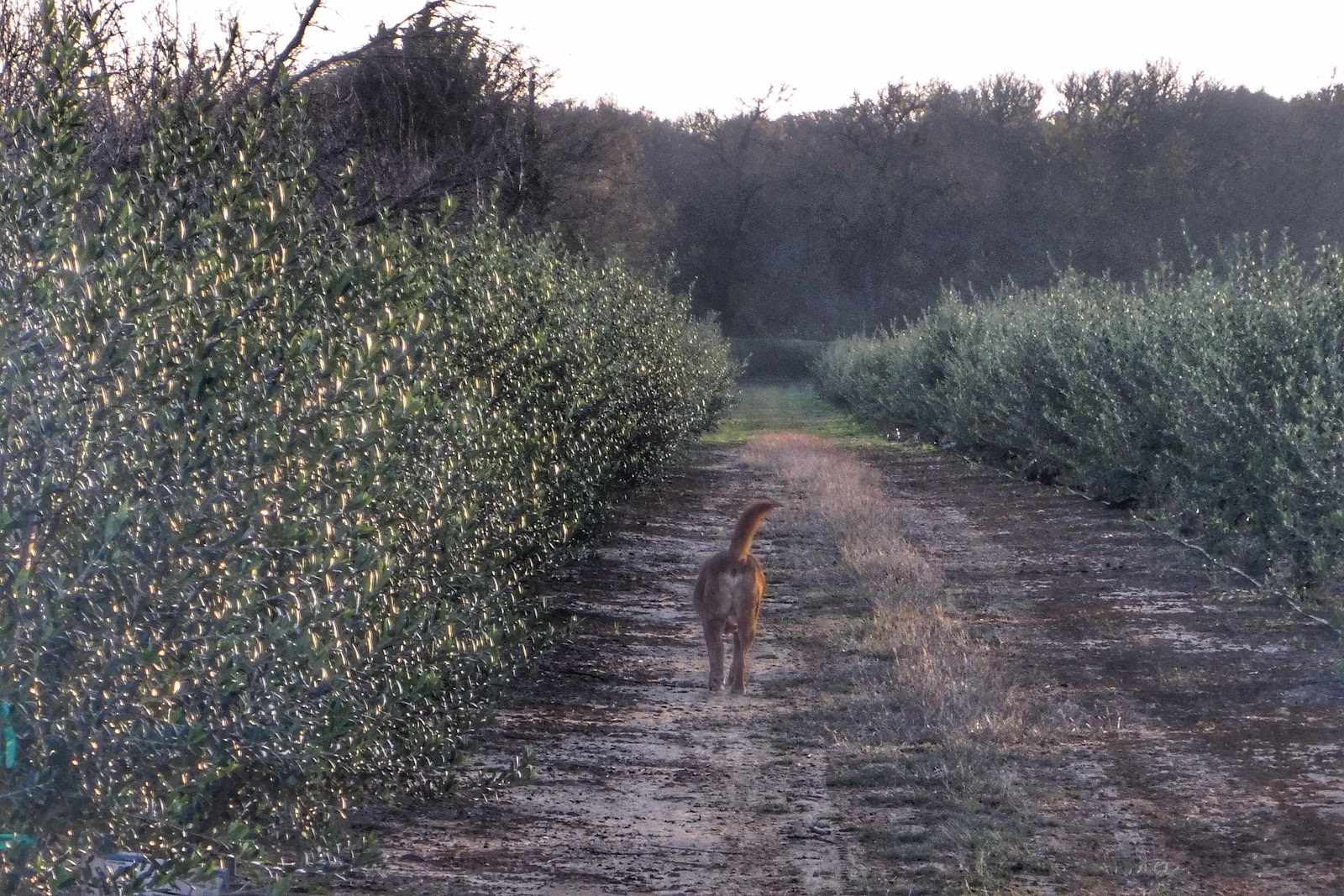 Frank deals with drought by pumping a couple of wells and storing water, and in dry years he has to order water by the truck load. It's not an easy life but the pair of them made the effort to tour Europe and tasted oils in Greece Spain Italy France and so forth and settled on two Spanish olives they wanted to grow in this new hard life. They found an advisor at Texas Agricultural and Mechanical university to guide them and they hire volunteers to come and pick olives each September. And they have their own harvest festival. 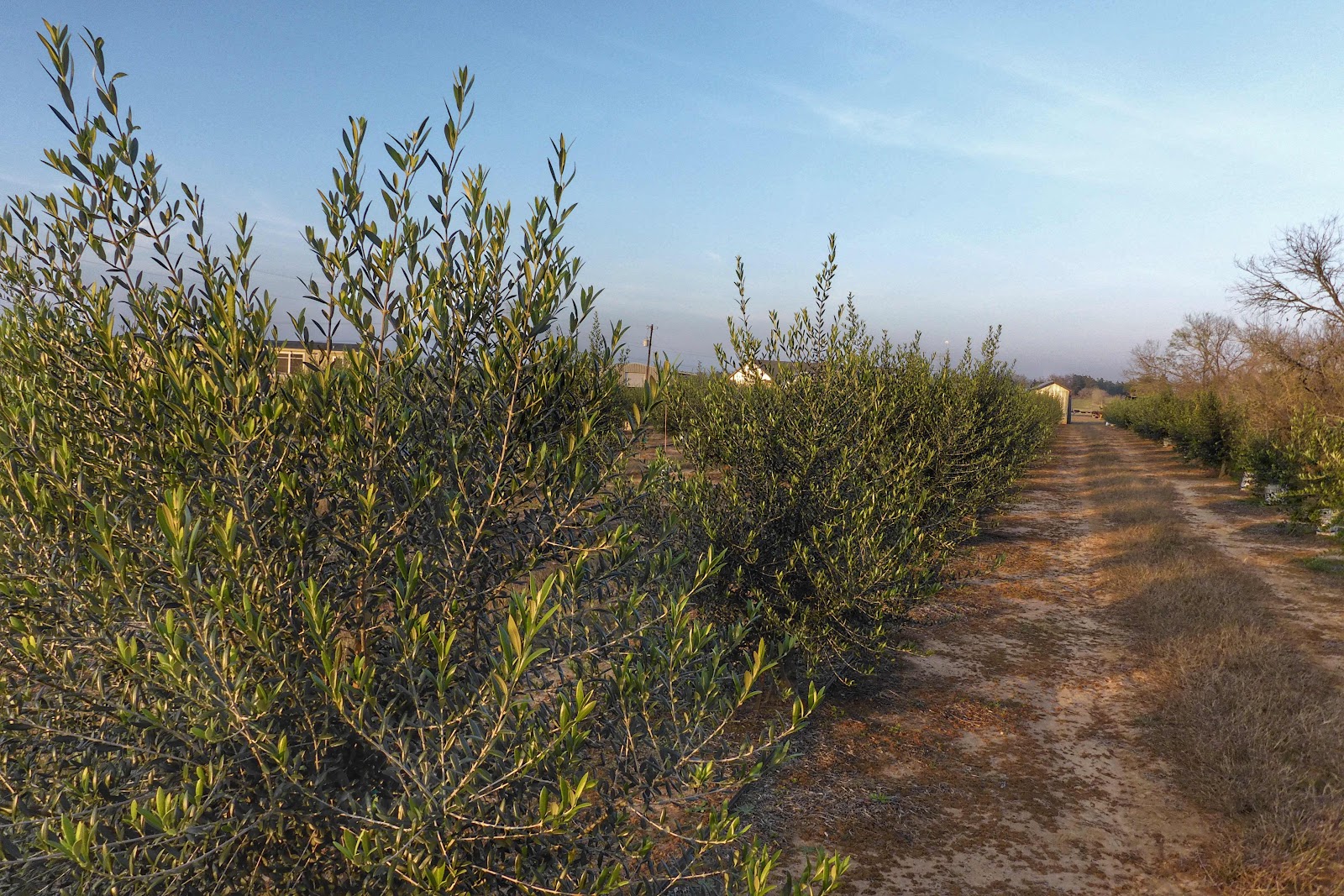 My family grows olives among other crops in Umbria in central Italy and my nephews have installed their own very modern olive press to make and sell their own oil. I fled that life 40 years ago and have no regrets though obviously it suit s a lot of people beside myself. I enjoy seeing people enjoy it. 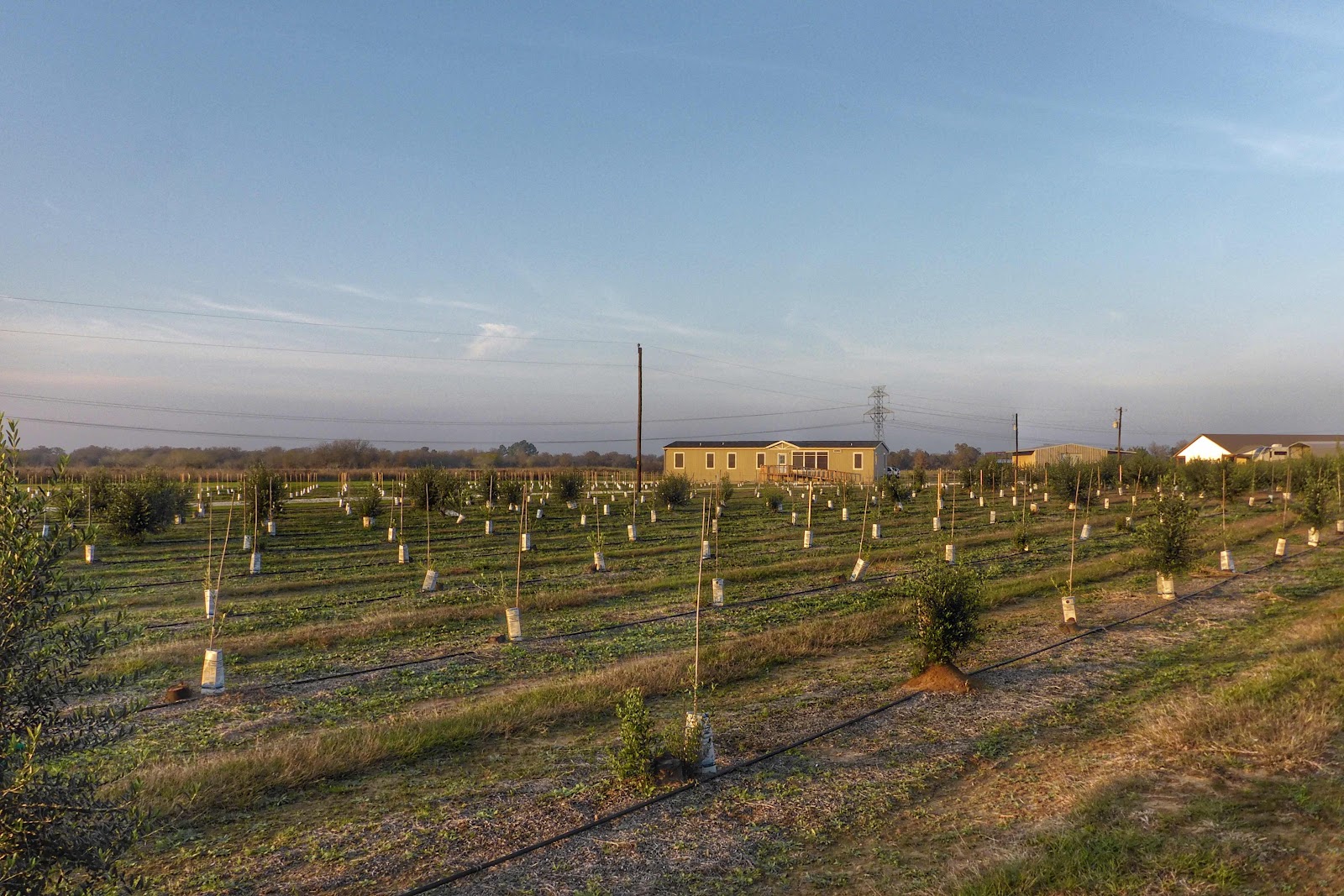 In the 1960s and 70s I recall olives being picked much later, in December and January when frost was on the ground and olives were picked by hand. The pickers we hired carried A shaped ladders, pointed at the top so they would fit snugly among the branches of the olive trees which were much taller than these Texas bushes. The women would pick the olives and throw them in a basket they carried on their arm. One olive by one olive. Frank also picks his olives by hand but puts them through a sifter to remove leaves and debris. 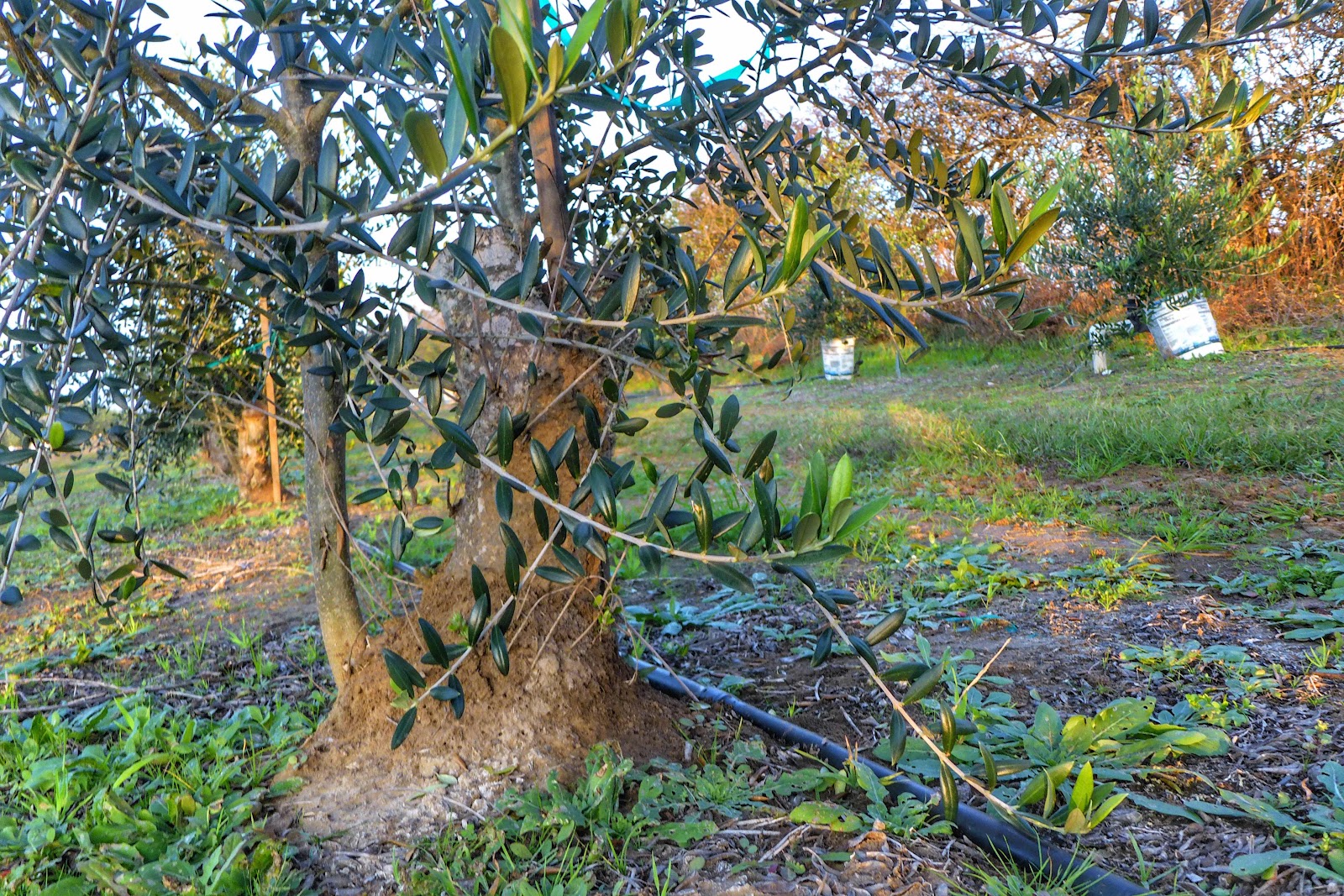 The olive press of my childhood memories was a giant machine with two stone wheels powered by a motor that turned the big wheels of stone around and around forcing the oil out of the fruit. The olive press worked day and night for weeks, a huge series of rooms warmed by a wood stove and when I, he boss's son, visited they would cut me a slice of bread and toasted it on the stove. Then they would take the lightly charred bread and  drip freshly pressed oil on it, rub it with a ripe tomato so the flesh and seeds stuck on the oiled bread and finally they sprinkled big chunks of salt and handed it to me. In my later years this peasant snack has become a prized appetizer called bruschetta ("broo-sket-ta" with a hard K sound) in Italian restaurants. 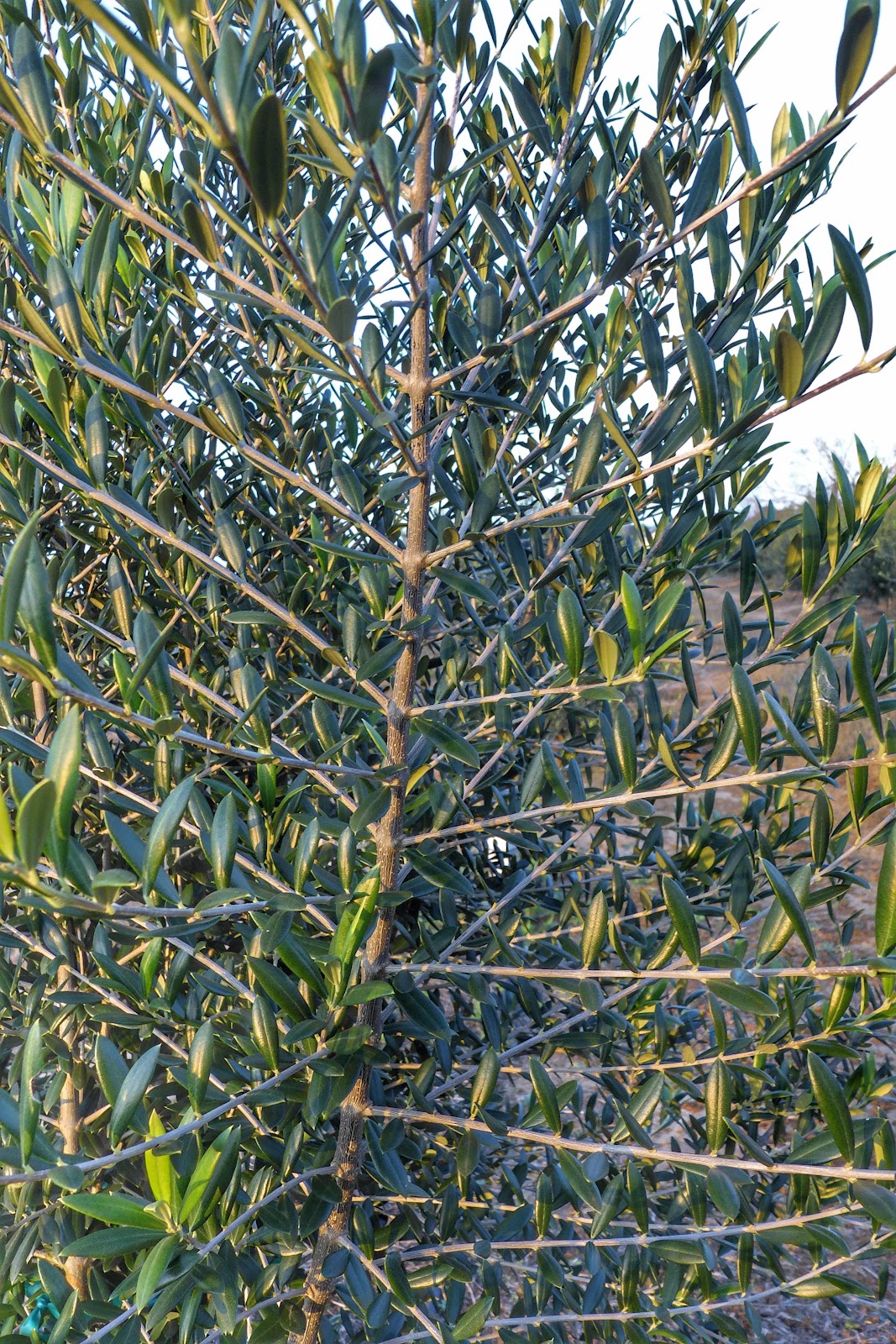 Dell's Favorite is famous among Harvest Host reviewers for the quality of the bread you can buy to dip the oil in but Frank's supplier is  sick with Covid so supplies are cut off and one is left wondering why a small business would risk it's money flow for want of a free vaccine. We shall have to buy bread elsewhere and there are numerous German bakeries around Austin fortunately. 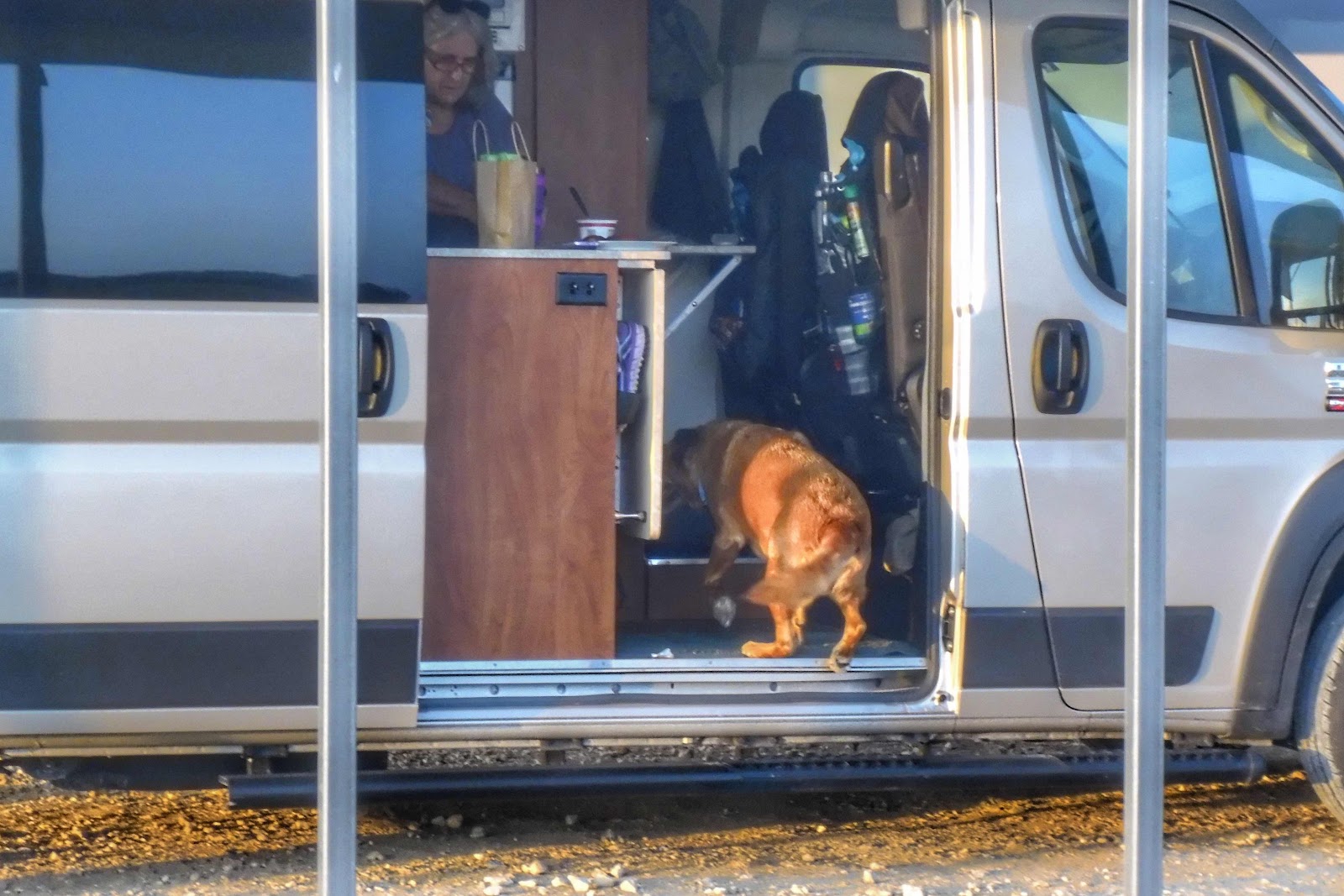 Harvest Host is a quiet and unusual place to spend a night, plus Layne has her Christmas gifts, so instead of paying to sleep among a crowd of RVs we slept among the olives and I have to say I was exhausted by 8:30 and passed out. Just discussing the job of making oil in Texas wore me out. 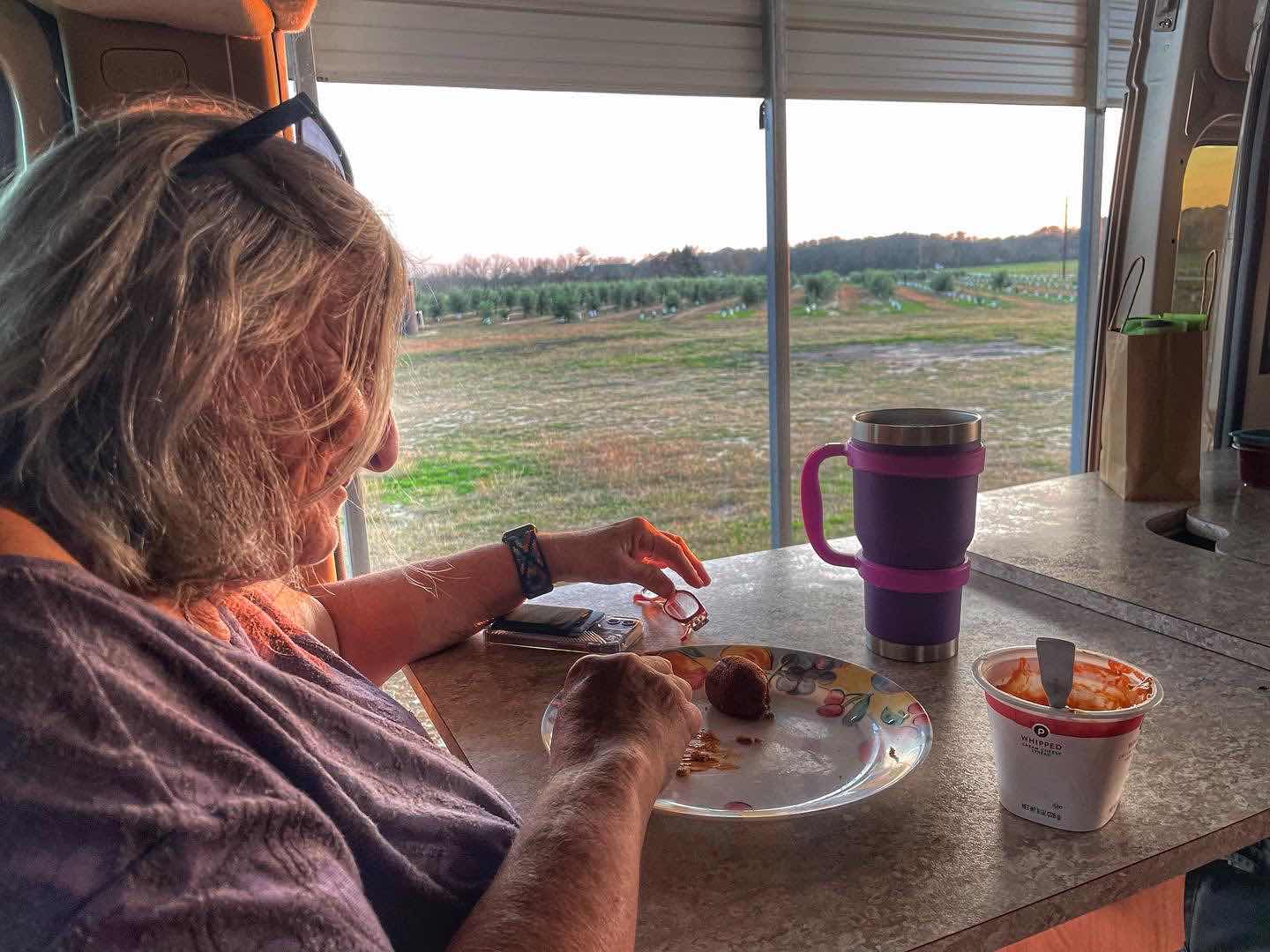 Rusty was free to roam but he hopped into the van as the sun went down and watched the world outside while we had dinner. 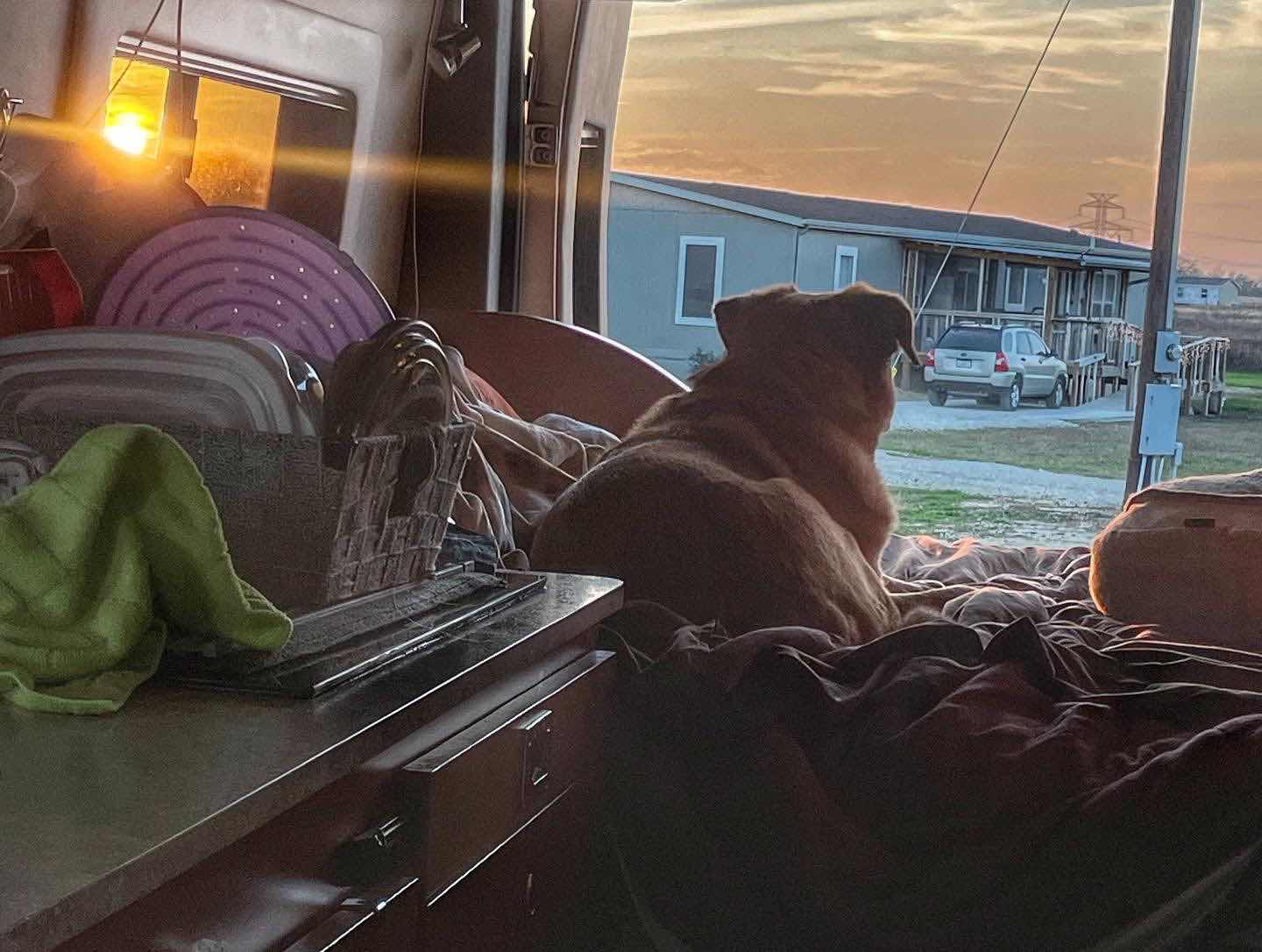 Next up Austin where we believe we have found a suitable outdoor venue for music and perhaps a glass of beer. The German settler influence is felt strongly here. 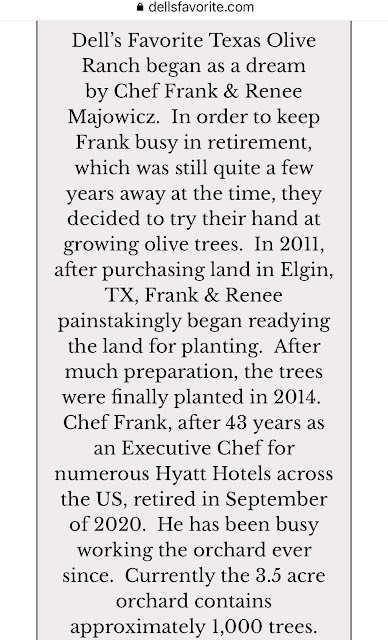 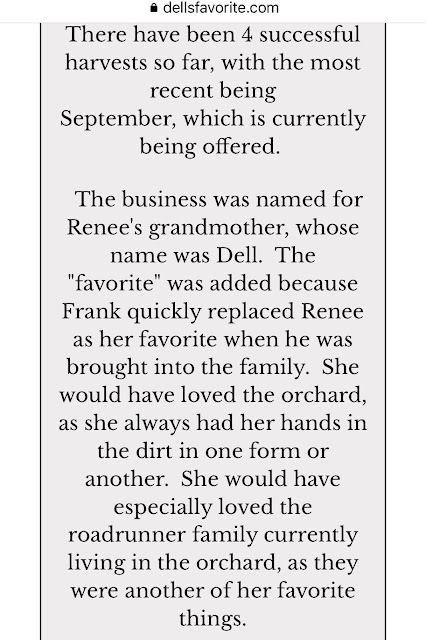 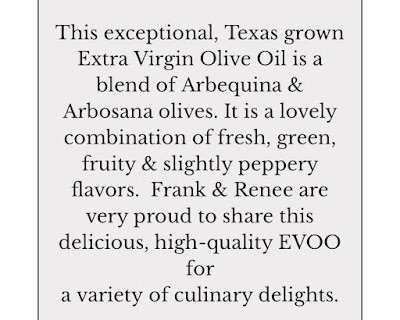