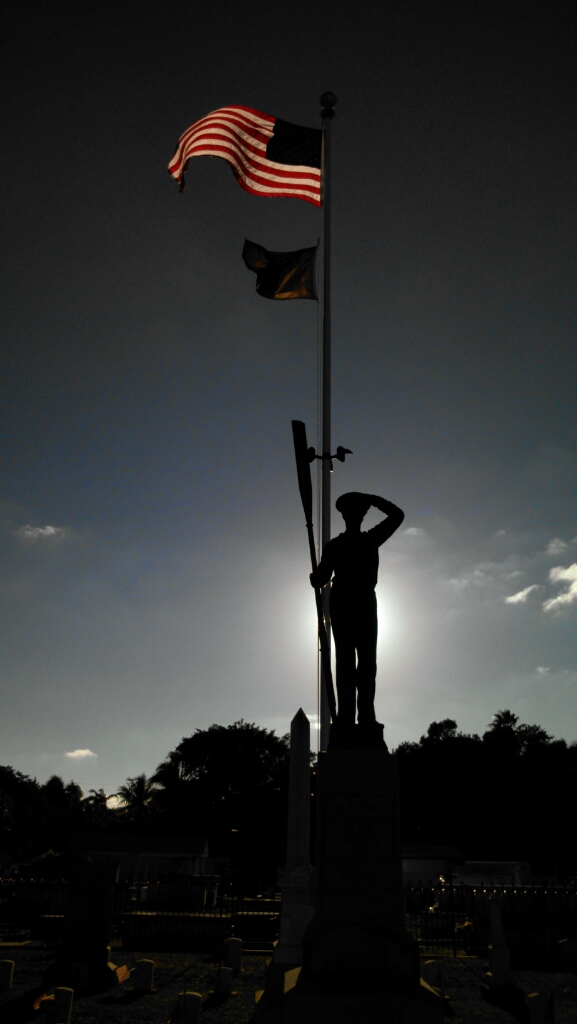 The problem with the Key West  Cemetery is that its so picturesque you can hardly move there without tripping over a picture. Including of course the iconic monument to the sinking of the USS Maine... 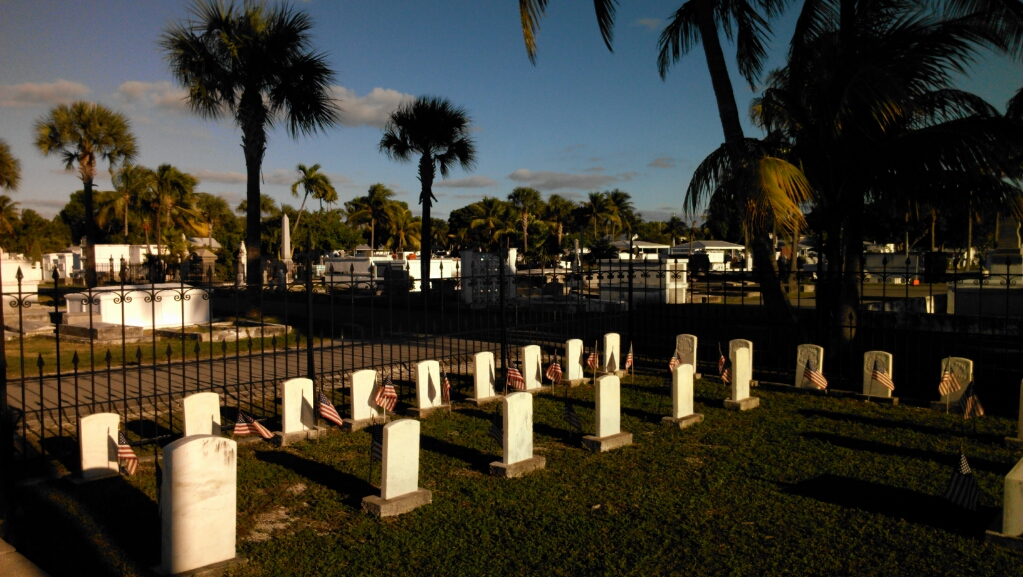 ...the event in Havana harbor that at the time was viewed as sabotage and an invitation to war.  Key West took care of the sailors wounded in the coal explosion and buried some members of the crew in the city's cemetery.  From the Key West City website:
The U.S.S. Maine Monument - On February 15, 1898, the U.S.S. Maine blew up in Havana Harbor, killing some 260 American sailors, a disaster that led to the U.S. declaring war on Spain. Two dozen of those dead are buried on either side of the central copper statue. Also in the plot are other Spanish-American War veterans, Civil War era markers, and veterans of other wars including two British airmen, a Brazilian sailor, a woman, and a baby. The iron fence and gates were manufactured by a foundry in Washington, D.C. and the U.S. Navy maintains the plot. 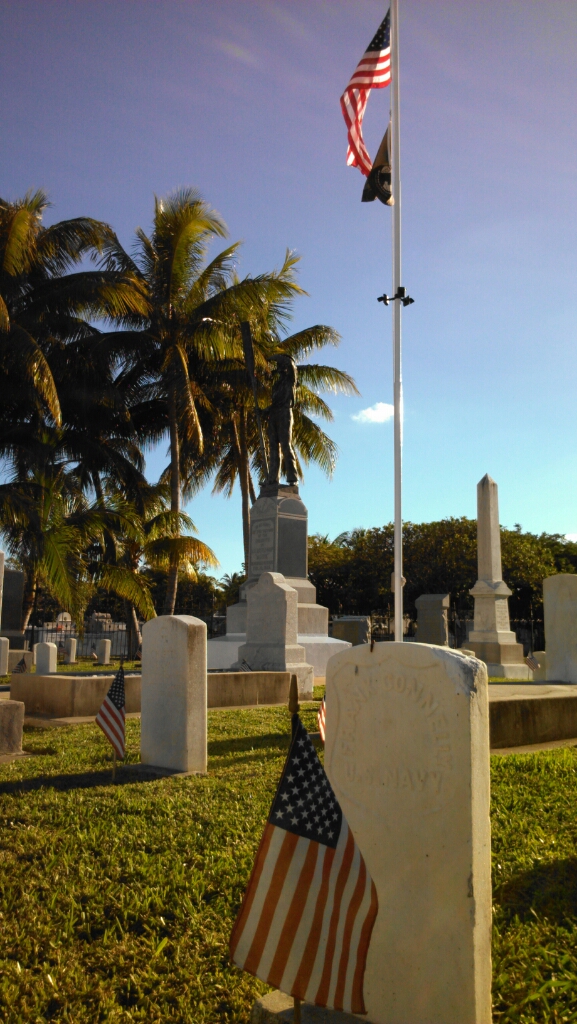 The inquiry into the explosion was also held in Key West even as the US invaded Cuba to liberate the island from Spain (remember the Monroe Doctrine!) and took over Puerto Rico, Guam and the Philippines as a precaution. 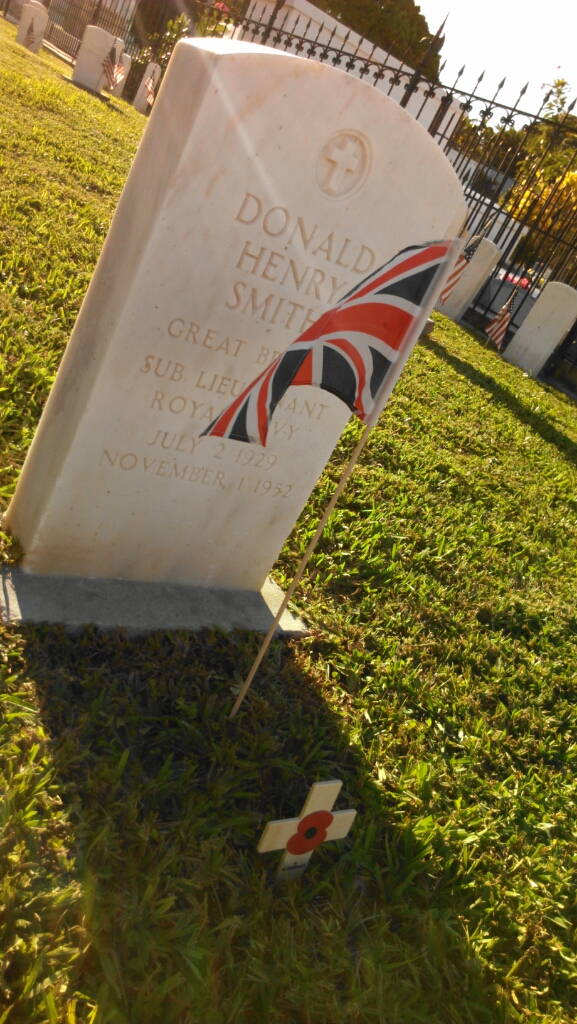 I was greatly impressed to see a traditional Armistice Day Poppy planted at the two foreign graves, airmen who died in the 20th century and were buried here. 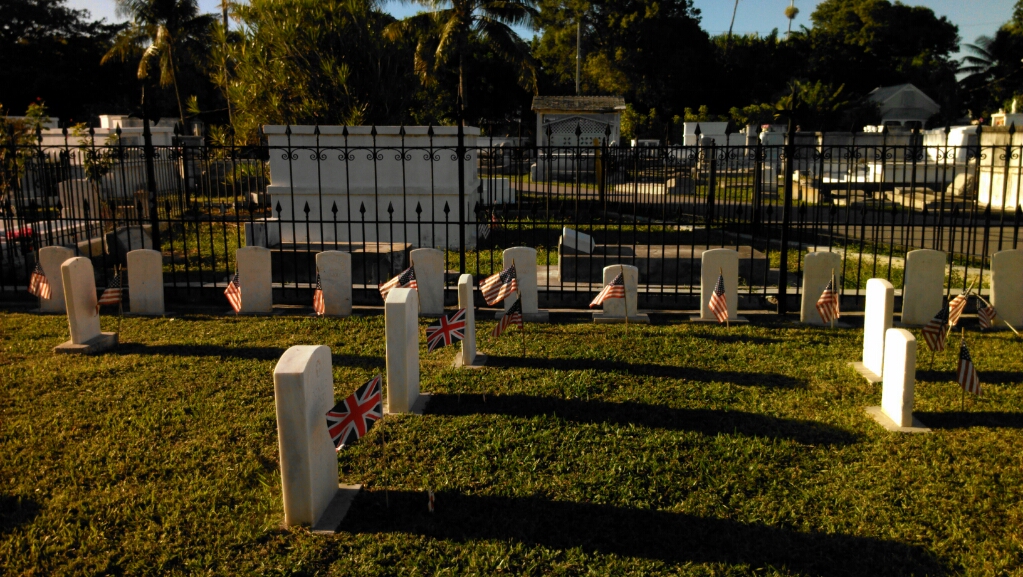 It is rather for us to be here dedicated to the great task remaining before us – that from these honored dead we take increased devotion to that cause for which they here gave the last full measure of devotion - that we here highly resolve that these dead shall not have died in vain – that this nation, under God, shall have a new birth of freedom, and that government of the people, by the people, for the people, shall not perish from the earth. 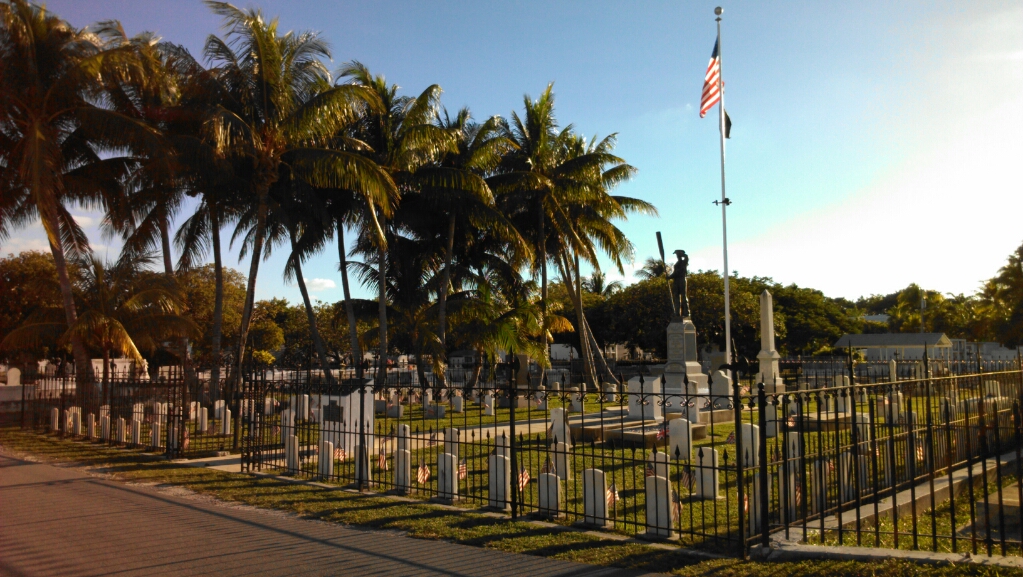 One cannot help but wonder what kind of stewards we have been of those principles espoused by President Lincoln at Gettysburg considering the monstrous corporate expense of the last election, a modest mid term, with relatively little legislator turn over and a pathetically small voter turn out. 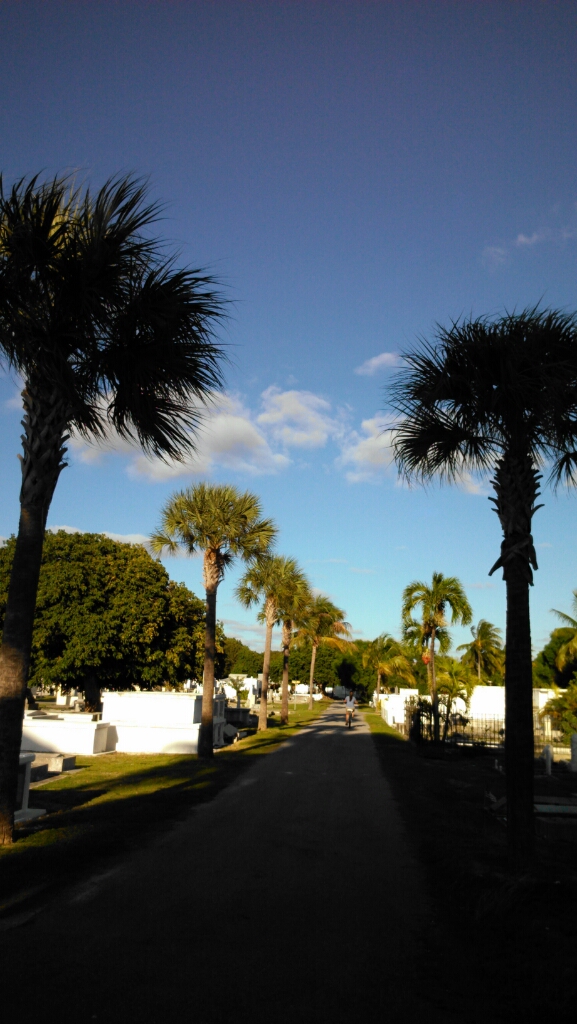 Mario Sanchez, Key West's most renowned folk artist has a freshly refurbished marker with his iconic signature embossed on it, as well as his own commentary on his art celebrating daily life in early 20th century Key West: I know my art isn't great but people like it, right? 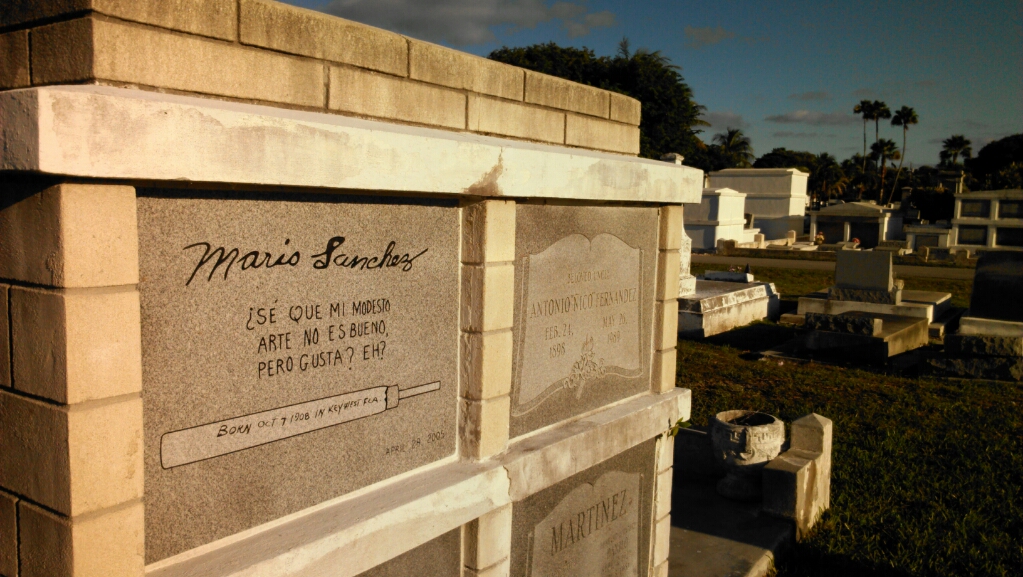 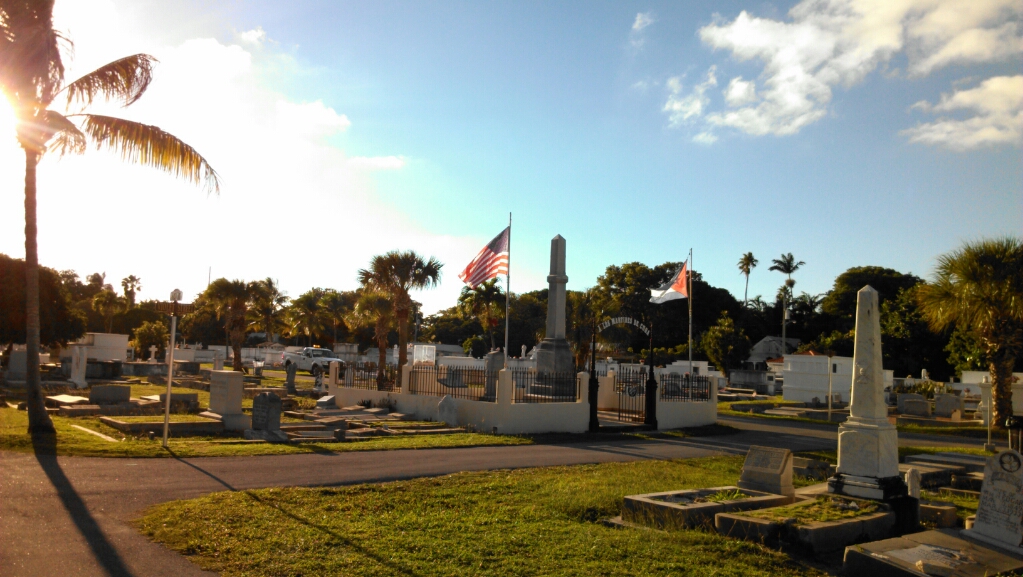 Scattered throughout are the markers of a different era, 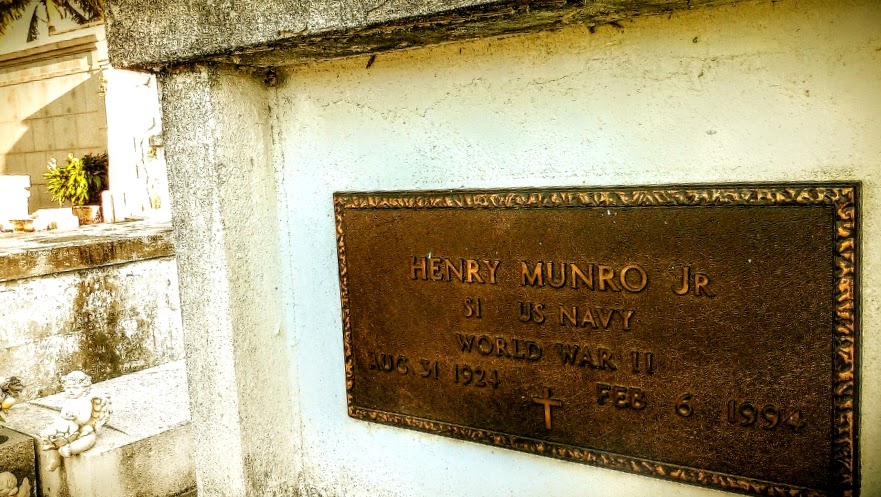 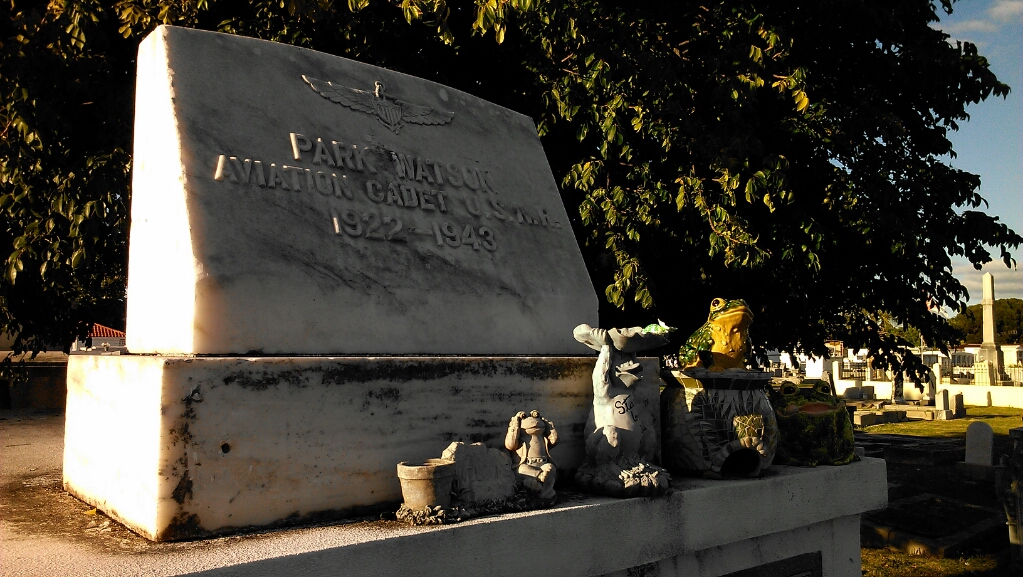 In Key West's own burial style. 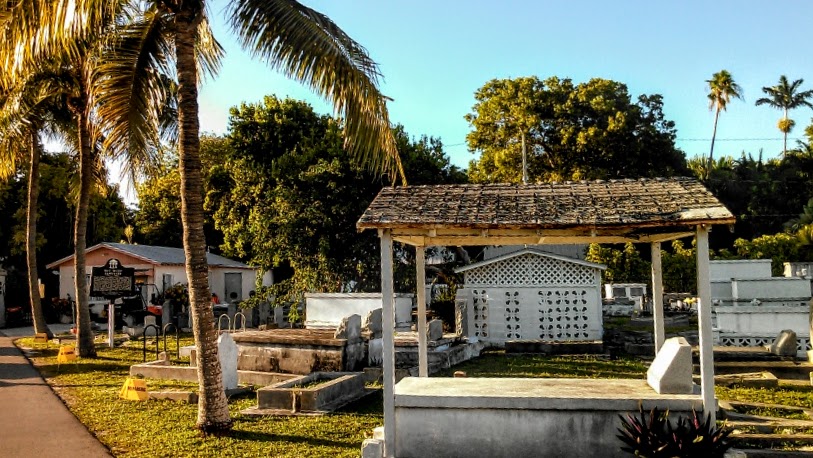 And outside the gates the daily search for meaning as fascinating as that found inside the gates. Key West chickens, always a source of wonderment observed on the street. Life goes on in a tourist  town. 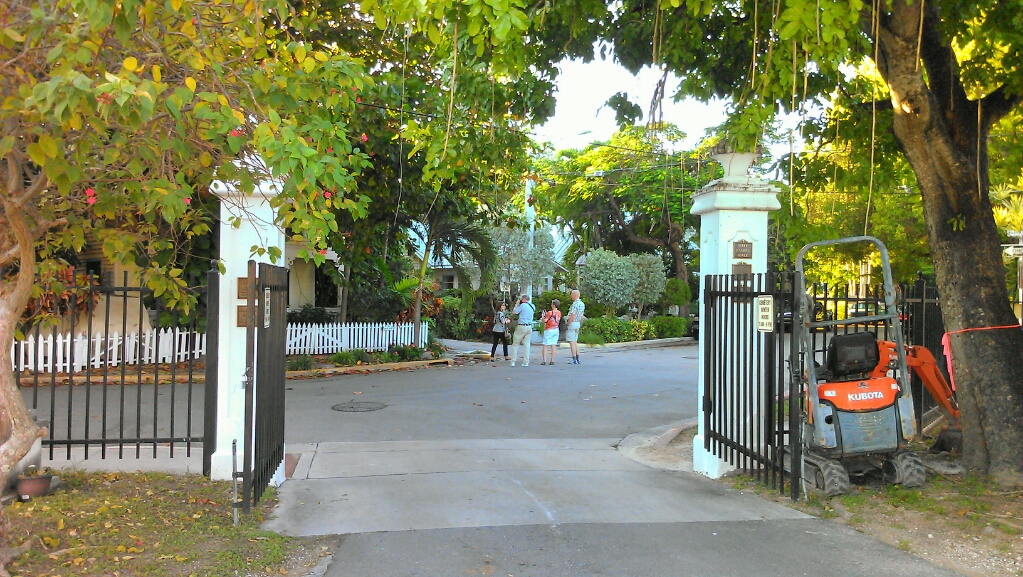 "...and in their death they were not divided: they were swifter than eagles, they were stronger than lions."
Posted by Conchscooter at 12:00 AM No comments: