I have a habit of over compensating my dog. She has been limping a bit and the vet has given her a course of pills, my wife has upped her dose of the anti-arthritis magic pill that I can't spell, but age wins in the end and we know where this will take us. So while I can and she can, we walk and these days she really really likes urban walks. I miss our romps in the mangroves but it's her time so she gets what she wants, in as large doses as I have time for, and a quick inspection of a surviving Captain Outrageous bicycle seemed to please her. 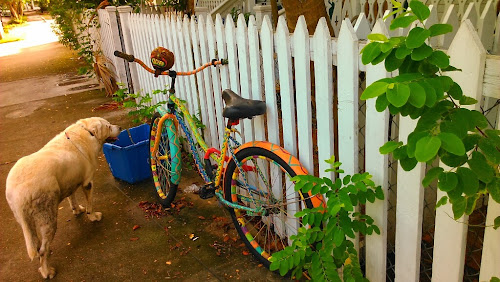 I was sorry to see the accessory coconut cup holder was reduced to transporting a crushed empty cigarette pack. I suppose the late Outrageous's philosophy was art for every day use there's nothing more everyday for an addict than a cigarette. 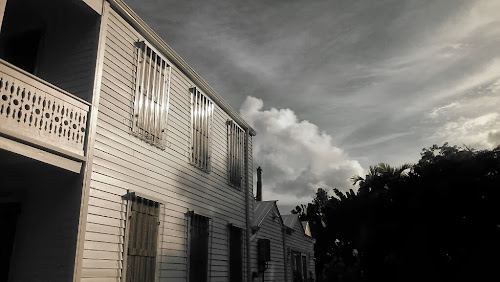 I got rained on Tuesday night on my way home from a short shift at work. I had stolen the wife's Vespa 150 and as I came into Big Coppitt the rain started. I took shelter at the Shell station parking the ET4 by the pump even though ironically I had just filled up at the Stock Island Chevron, and I watched the water pour down. The rain has been incessant this summer and last night was no exception. Clearly it wasn't going to stop so I wrapped myself in a waterproof jacket more to stay warm than dry and off we went into the dark sodden night, the Vespa and I. By the time I got home twenty minutes later I was soaked but, I had survived another night of wind rain and minor excitement on the highway. The sunshine that follows the storm is sweeter for out. 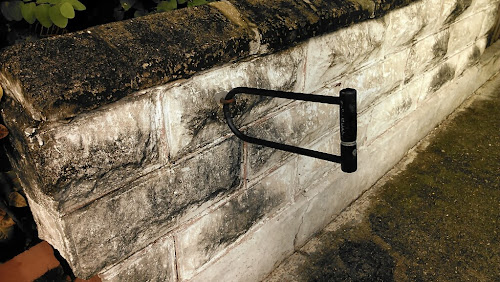 Walking Key West I see stuff that puzzles me sometimes but the bike lock cemented into the wall wasn't puzzling - it looked simple and smart. It's a bit like the new style hurricane shutters in the picture above reflecting the sunlight. I use traditional aluminum sheets at my house but I am intrigued by the translucent plastic ones. There's nothing like sitting in your house waiting for a hurricane with all light and all views shut off turtle style by sheets of industrial grade metal. While I'm on the subject of impossible dreams my home will never look spiffy and tidy like this. I am resigned: 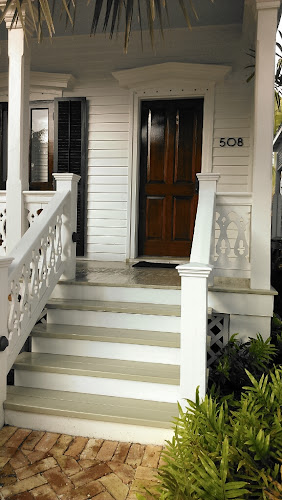 It seems like it takes a huge amount of money or time to get things just so and my life is way too normal to expect things to be just so. I recently murdered my wife's indoor basil plant by misjudging it's water needs and her orchids I don't touch. I saw these plants tied to a tree and I wondered if orchids normally get this ...robust? 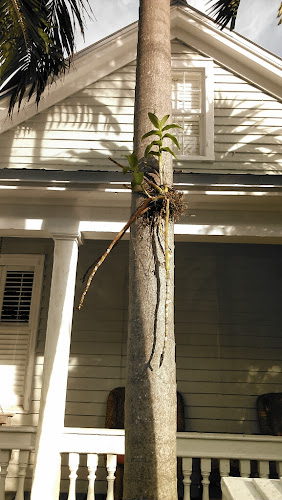 Some guest house operator on Fleming got the idea, where from I don't know as these things escape me, to put bright white stones in a tree pot. I found them intriguing. I've seen them before but today they looked bright and washed and new. I'd never think of such a thing. 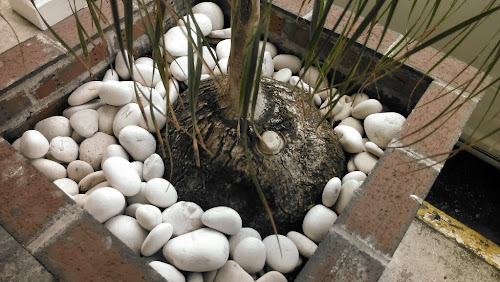 The next thing we came t owas the art gallery that used to be a gay bookstore called Flaming Maggie's a reminder that the building is on Fleming and Margaret streets. It is something else now, thanks no doubt to an uncertain economy. 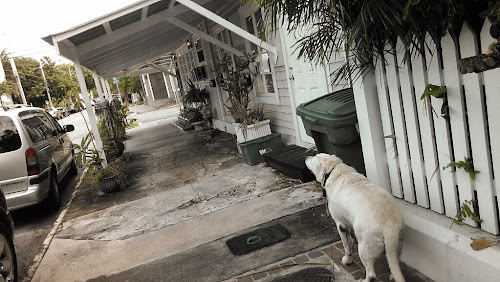 Now it's called Salt apparently an offshoot of a boutique magazine that was on display behind the firmly locked doors. salt: an indigenous journal | arts, literature & community. Like most things Key West it seems to come and go on a whim published at random. The woman behind it use do paint in Key West then she buggered off somewhere more interesting and apparently now is back selling stuff in jars. 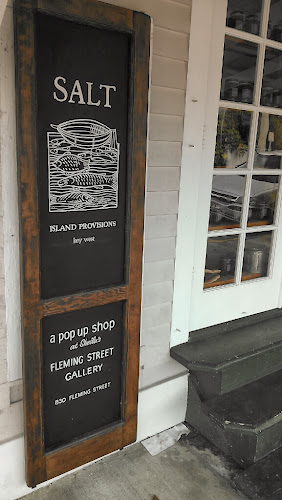 Coming and going is fashionable now it seems:

A pop-up retail space is a venue that is temporary — the space could be a sample sale one day and host a private cocktail party the next evening. The trend involves “popping-up” one day, then disappearing anywhere from one day to several weeks later. These shops, while small and temporary, can build up interest by consumer exposure. Pop-up retail allows a company to create a unique environment that engages their customers, as well as generates a feeling of relevance and interactivity. They are often used by marketers for seasonal items such as Halloween costumes and decorations, Christmas gifts and Christmas trees, or fireworks.

There are different benefits to Popups, marketing, testing products, locations, or markets, and as a low cost way to start a business. Some are seasonal, others go on to sign long term leases, and some use it as creative engagement. 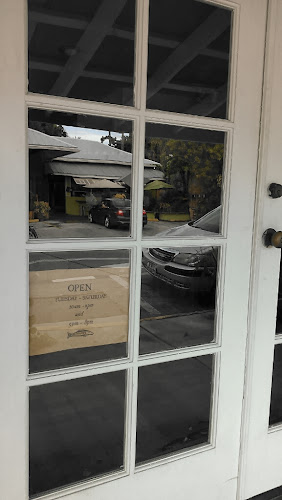 It's lucky they aren't actually selling "provisions" because most working people would go hungry if they did. The word provisions is one I've heard a lot when I was out sailing. For some reason people on boats talk about grocery shopping as "provisioning" as though buying food to go sailing were some 19th century expedition hunting salt pork and biscuits. 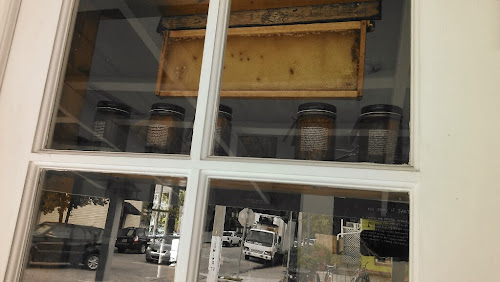 Which was when some bloke walked up to me addressing me by name. I think I did pretty well and made eye contact, sustained a conversation and remembered to take his picture. Take that Aspergers! 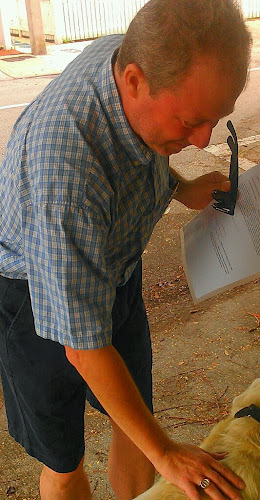 George has made a split life for himself in Key West and Prague of all places... Not exactly your Iowa cornfield! He was very nice about the blog and we chatted for a while about traveling, child raising (him, not me) Key West and eating out. I hope he calls but I'm never sure what people think and reading me creates one set of expectations which may not be met in real life. He closed with a comment about the night time black and white pictures I get to take on night shift. Something like this I guess! 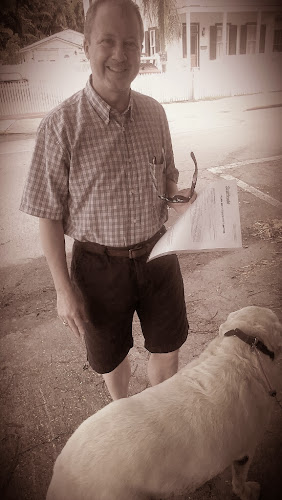 There is color still in Key West of course, like this lobster claw. 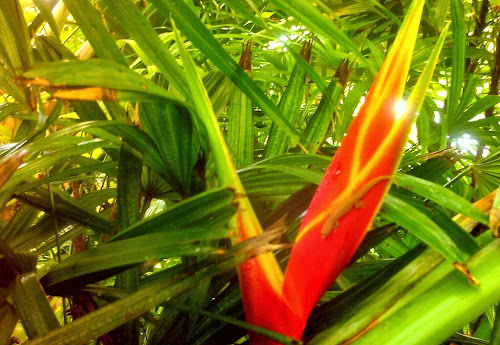 I am reeling from all the colors textures, light and conversation on one short walk. And Cheyenne said nothing through all of it.