I was born in 1957 the same year Libero Liberati won the world title in the 500cc class. There is a monument in his memory, in a park above the Marmore Falls near Terni.

In 1957 Liberati won the 500cc, the prestige class on a Gilera four cylinder with the huge dustbin fairings. He also came second in 350cc class, after a decade of struggle and several much lower rankings with Gilera and Moto Guzzi rides. He was born in 1926 and died in 1962 in a street wreck.

He is remembered in his hometown where the local motorcycle club is named in his honor, but as far as the rest of the world is concerned he is just Liberati...who? Sic Transit Gloria Mundi.

"To Libero Liberati, motorcycling world champion, who brought to the attention and admiration of the sportsmen of the world his passion, fire and class, and thus prestige to the name of Terni and Italy, with thanks for the honor, his fellow citizens of Marmore."

I keep thinking that done right Terni would have enough attractions to overcome its flat, ugly, grid pattern of streets and lure tourists to the area. Tale this little village for instance, just a few miles from Terni's center.

Home to the largest waterfall in Europe. the Cascate Delle Marmore may not be Niagara Falls but whenthe water is flowing they are impressive nevertheless.

The fact is the water only flows a couple of times a day in tourist season and the rest of the time they are shut off, because some few years ago someone had the bright idea to dam the Nera River to make a hydroelectric plant. When the water flows it creates a great cloud of mist.

My wife was a little taken aback by the falls, impressed more than she had expected to be and we stood and watched for quite a while.

One French tourist who had asked me for directions and was surprised when I answered him in his own language confided to me that he thought they were beautiful, but bit was a pity they were artificial. To me the place is artificial when the natural falls are cut off.

The falls created a pleasantly cool environment to take lunch, a simple sandwich to ease our livers suffering from a diet of rich food.

We saw some rather overwrought visitors acting as though there was a danger of getting drenched.

Others were less concerned.

Dead on time at one pm the flow started to ease, imperceptibly at first.

But soon enough it was back to making electricity until the evening show.

A fine use of seven Euros we thought.

We staggered back to the bathrooms where we encountered a blast from the past.

All public loos used to have them, little old ladies collecting a small fee for Mai rinsing the facilities. One pays after use to ease the embarrassment of patrons taken short but I took care of my wife's urgently needed 30 cents (four bits, American).

I have a soft spot for the falls. My grandmother Gina Palmucci took the stage name of Nera Marmora after her home town's leading attraction when she quit teaching and became a surprisingly talented opera singer. She retired early to marry my grandfather and died giving birth to my mother in 1924.

Posted by Conchscooter at 4:11 PM 4 comments: Links to this post 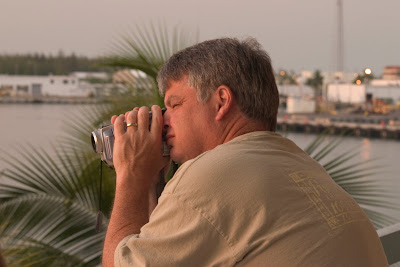 The dedicated photographer on vacation and in action. Author of this picture unknown, but thanks to Gary for letting me use his pictures during the month of July.
Posted by Conchscooter at 4:01 PM 1 comment: Links to this post 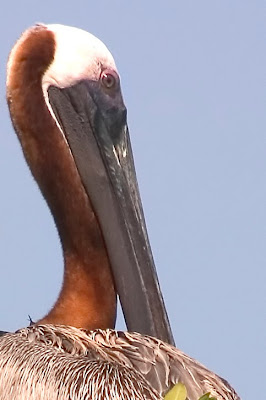 Colorful Pelican by GarytheTourist. Conchscooter, the man behind the curtain, will be back August First when vacation is over and work resumes, at Key West PD and here on the blog.
Posted by Conchscooter at 8:01 AM 2 comments: Links to this post

Castelgandolfo And The Backward Slope

Mea culpa, from our time in Rome at the beginning of our vacation my wife and I took a road trip out of the city on our rented 250cc MP3 scooter, and I forgot to write about it.

We rode through some pretty unremarkable flatlands to reach the hills of the Castelli Romani, the hill villages south of the city known to Italians as the roman Castles. The best known to foreigners is probably Castelgandolfo which is part of the Vatican City State and is the Pope's designated summer home and in fact the three villas and the self sufficient organic farm have more extra territorial land mass than the Vatican City State in Rome! As such it is not terribly accessible but Lake Albano down below makes for quite a view.

We were hot and hungry and after viewing the rather static volcanic lake for a while and I figured the local cops might know where to eat so we popped in to ask.

"The best place to eat? Why, that would be at my house- a casa mia!" said the police station wit. I shrugged and waited while the three of them consulted. They did not send us wrong.

We found the unassuming eatery by the side of the road overlooking the lake, serving delicious roast pork for an appetizer, pasta for our main course,

...and a splendid view. We lingered over the last of the wine and the coffee.

My next destination was actually rather mysterious, a place of inexplicable weirdness. Here's how it came about. In 1981 shortly before I left Italy for the last time in a quarter century some friends took me to a particular piece of road around here and put an empty soda can on a hilly stretch. The can rolled up hill. This memory came back when my wife agreed to visit Castelgandolfo and I was forced to do an Internet search for "magnetic disturbance Castelli Romani" and sure enough Google came up trumps.

Then using Google street view I pinned down the unmarked spot on Highway 218 at the end of the lake and sure enough, when I stopped the scooter and locked the front wheels to check our position the MP3 started rolling backwards up hill! Whoa!!

We saw some other cars slowing and stopping but we found the exact spot perhaps 30 feet long near the of the crown of the hill. Were this America there would be a parking lot, neon signs and and an entrance fee! But this was Italy so no signs of any kind were to be seen. A man walked by and started laughing at us for making so much of what he figured was just no big deal.

We spent a happy fifteen minutes driving forward and the locking the scooter in the upright position and rolling back, engine off, slowly at first and then faster than walking pace as we reached the crown. The scooter, the second from the right in this picture below, taken from our hotel window in Rome is designed to park and stay upright on all three wheels with no feet or stand down which made it ideal for the experiment.

I feel certain you expect an explanation at this point if you even choose to believe me, but there is none. No one knows why this is one of a handful of places around the world where this phenomenon manifests itself. It doesn't seem like magnetism would be the answer but I can assure you it's not psychological, we both felt and saw the scooter roll backwards up hill with the engine off (besides it has no reverse gear). Best guesses are welcome and as always you can post a comment on my blog without any of those annoying word jumbles whose point escapes me. Back in Rome the MP3 was as steady as ever,

Life was back to normal, how boring.

Posted by Conchscooter at 4:13 AM 9 comments: Links to this post 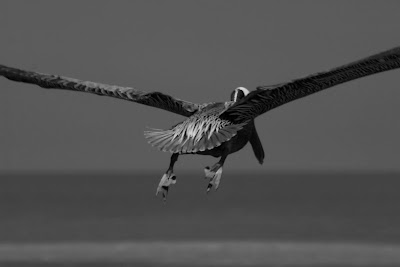 Colorless Pelican by GarytheTourist.
Posted by Conchscooter at 12:01 AM No comments: Links to this post