Not to put too fine a point on it this is a weekend of disappointment for me. I will be out of town managing to miss the Zombie Bike Ride Sunday afternoon; what is rapidly becoming an unmanageable yet very fun  part  of  Fantasy Fest Week. Plus I don't have time to lounge around at Goombay.  Grr...I like Goombay. a mild low key festivity and I should have preferred to spend more time there, but my over heated work schedule meant I could literally only drop in, walk three blocks on Petronia, pick up some food and walk back to my Vespa. However those they wish to punish the Gods sometimes reward with an easy parking spot so I got a spot very close to the festivities: 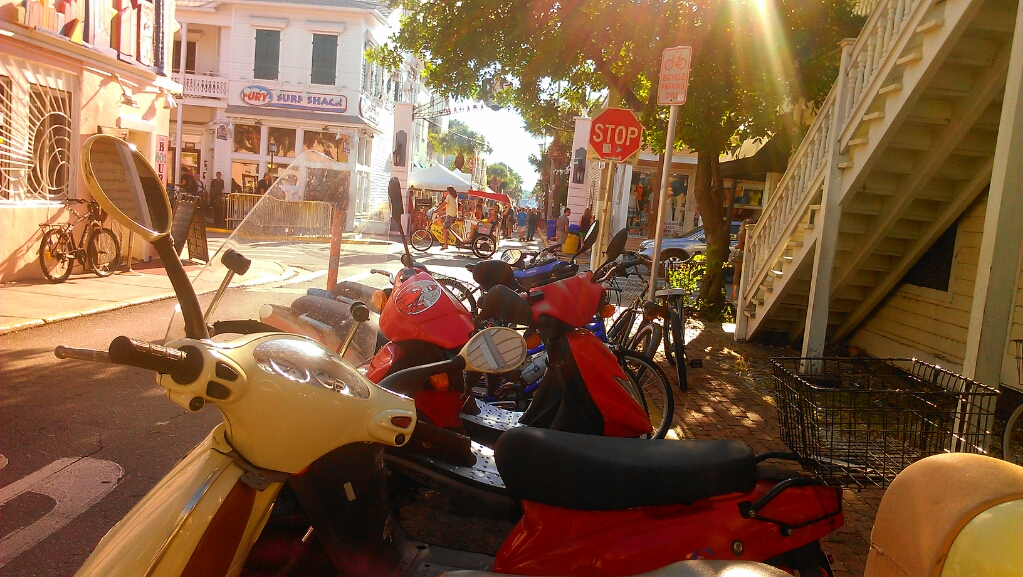 Goombay is supposed to be a Bahamian style celebration put on in Key West's mostly black neighborhood of Bahama Village so the name fits.  A goombay is I am told a form of Bahamian drum or music or some such thing. In this context its a street party to benefit children's music programs. The thing about Key West is that any kind of bacchanalia for adults or jamboree for children is always held to support some worthy cause. Drinking for well being is an odd concept outside the Southernmost City, but here its all in a day's work. 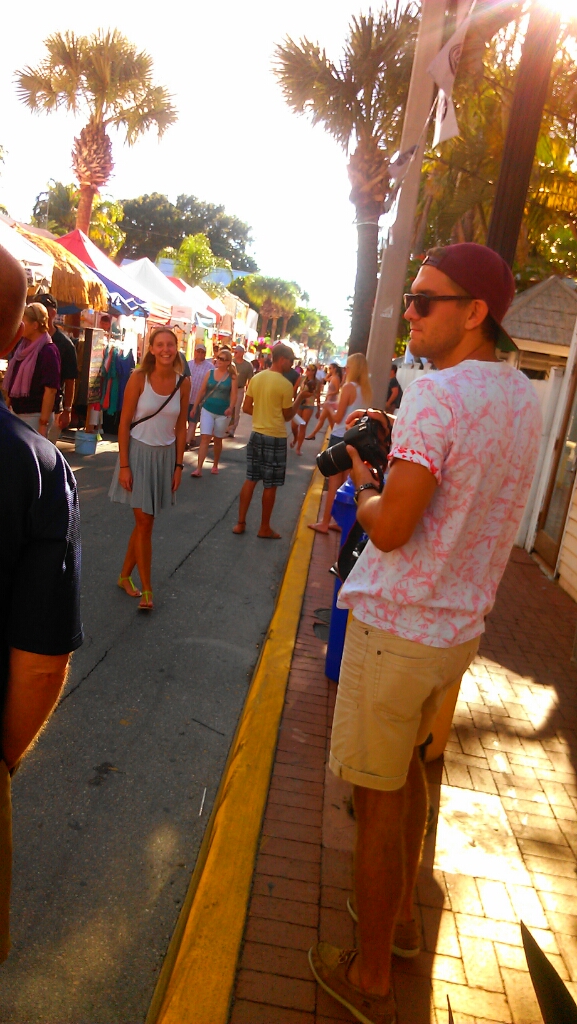 The Sarin Grill has urgent need of a marketing guru. Doubtless there is some charming family reason why they named their food stand after a deadly poison gas. However there were lots of choices so I moved along, only slightly holding my breath. 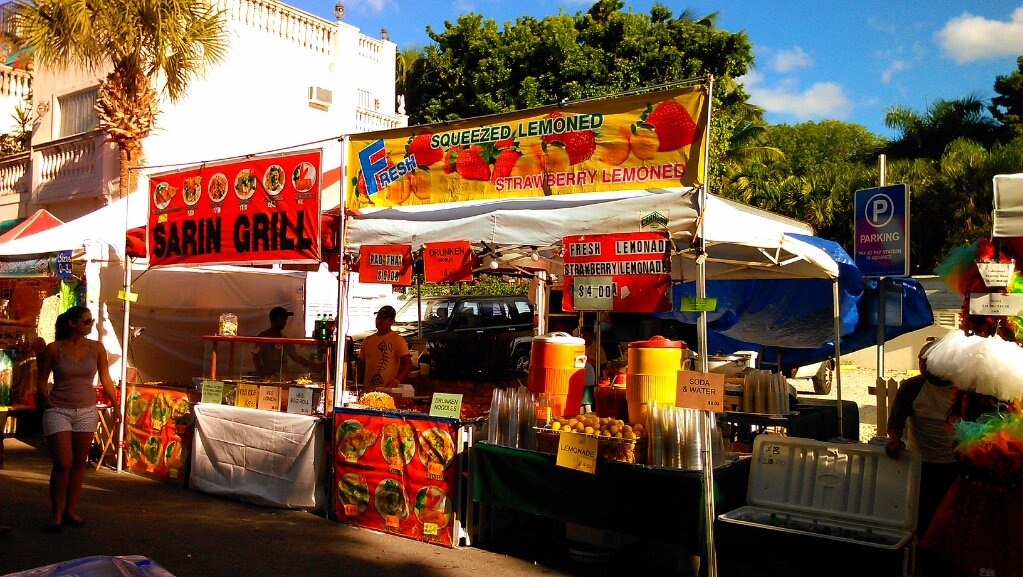 And just because this is a Caribbean street festival doesn't mean a food stand of any distant culture, description or ethnicity cannot buy space in the street. Come to Goombay and eat...Greek food? 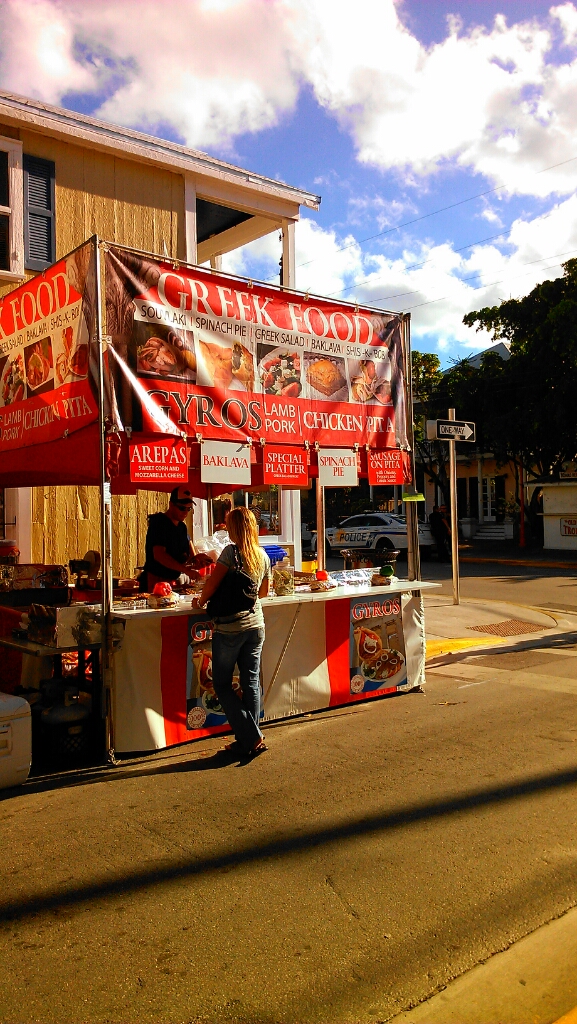 A  friend of mine refuses to visit Goombay on principle arguing that there is nothing special about this street fair and indeed some of these vendors will be back during the course of the winter. Which is true but Goombay is a neighborhood event where drinking is not required, kids are welcome and you get a chance to meet friends you may not have seen for a while. 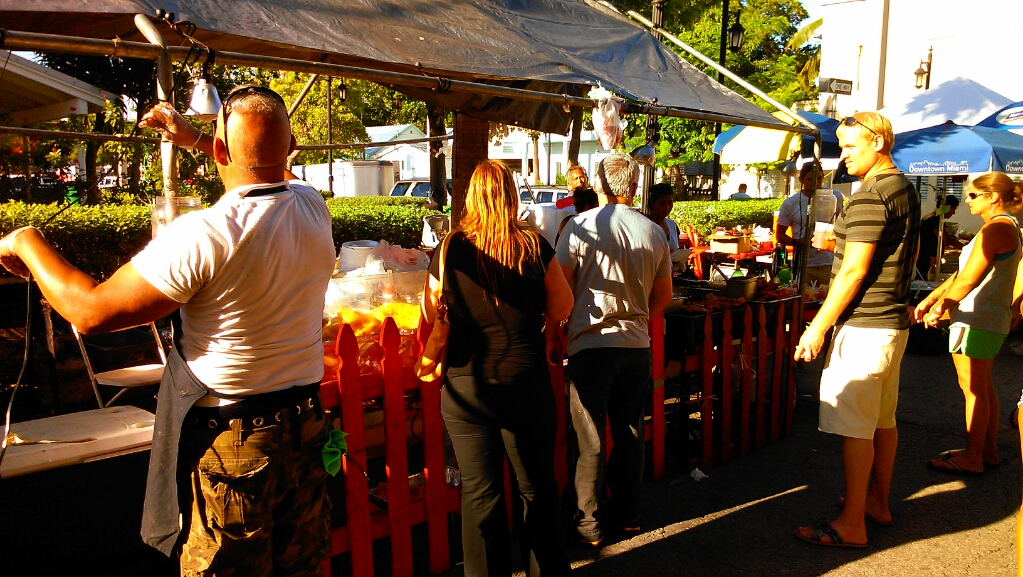 Wait a minute - jerk chicken?  That's proper Caribbean food. It was offered by Blue Heaven of course. Jerk is a mixture of spices originating in Jamaica, rather like a kind of curry dry  rub which can be as spicy hot as you like. 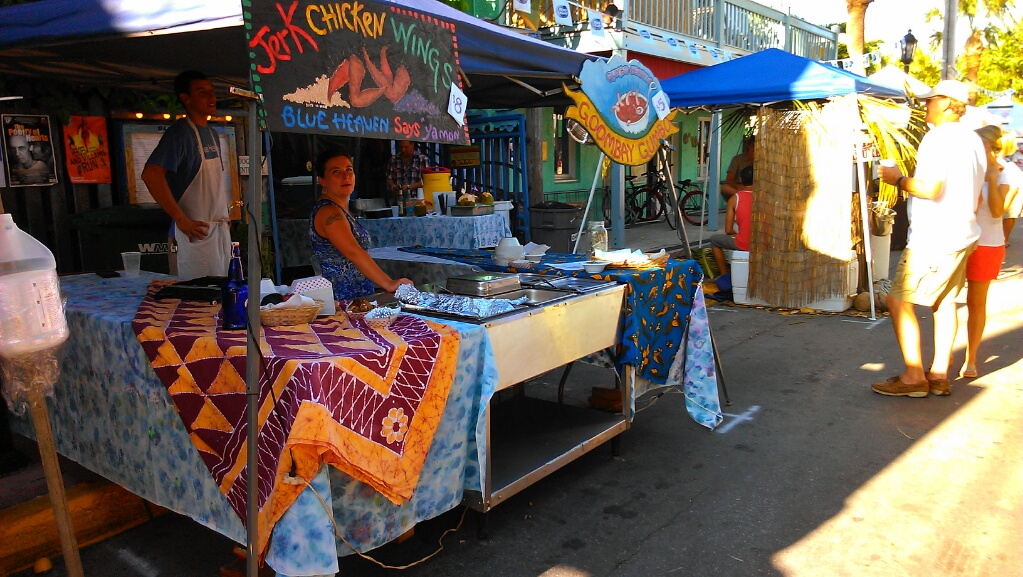 I got my four wings, spicy beans and rice and  found a quiet piece of sidewalk to ponder the meaning of life and the various meanings of the word "jerk." Eight dollars' worth of spicy sidewalk heaven. 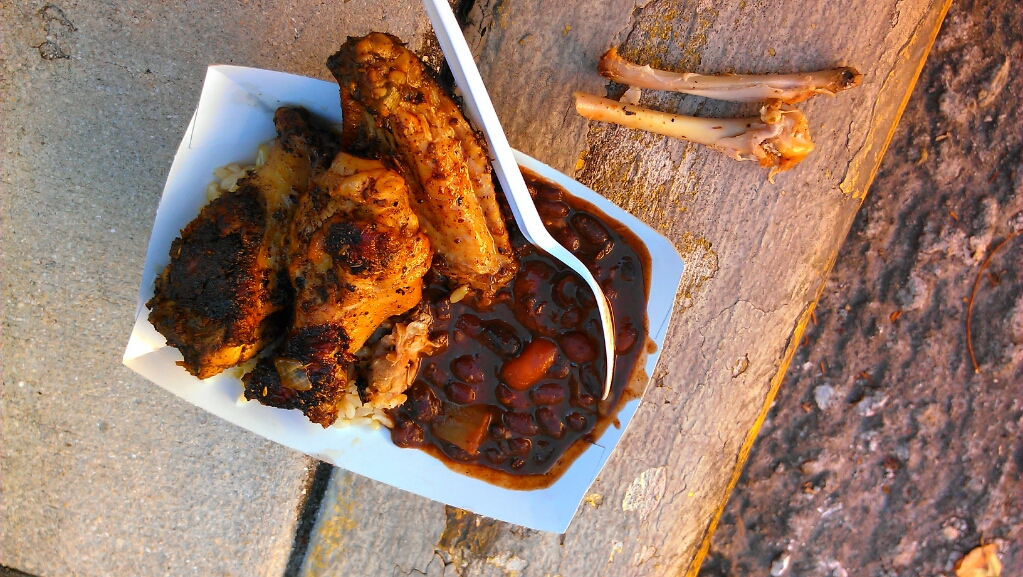 There was a man standing close by with a bazooka round his neck, most intimidating, but he was just talking to a friend. It turned out it was actually a camera. I have forgotten people have cameras that can't make phone calls (or work as calendars, flashlights, speedometers, maps or pocket libraries). 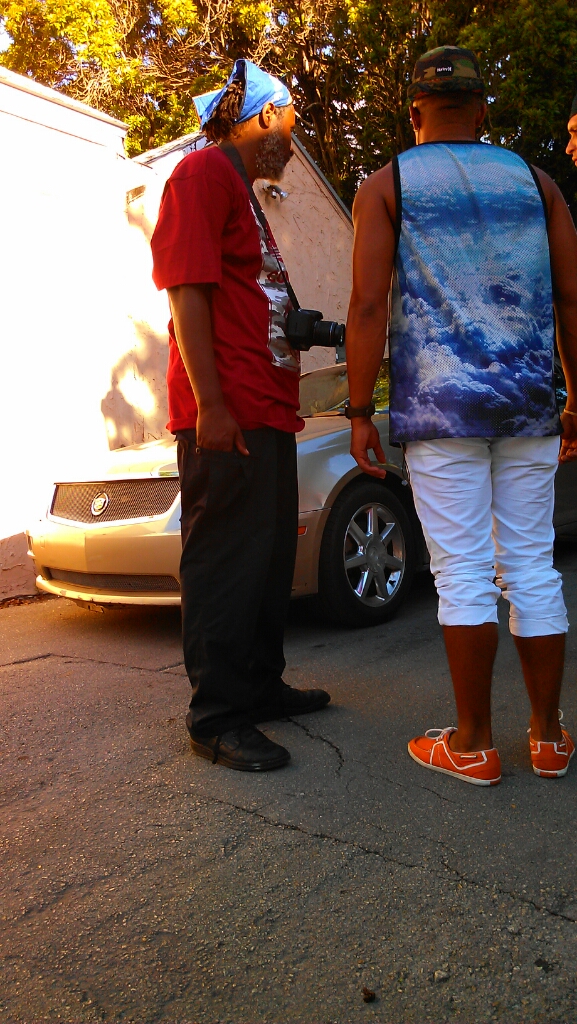 I was a bit early for the heavy crowds that come later in the day. 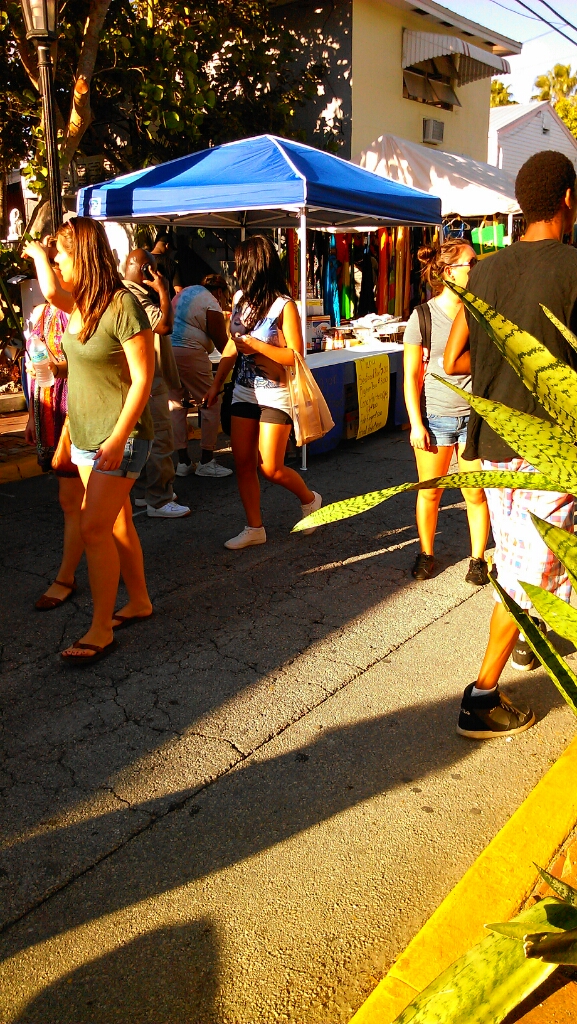 They have a bandstand near Fort Street and the  crowds can pack Petronia Street. 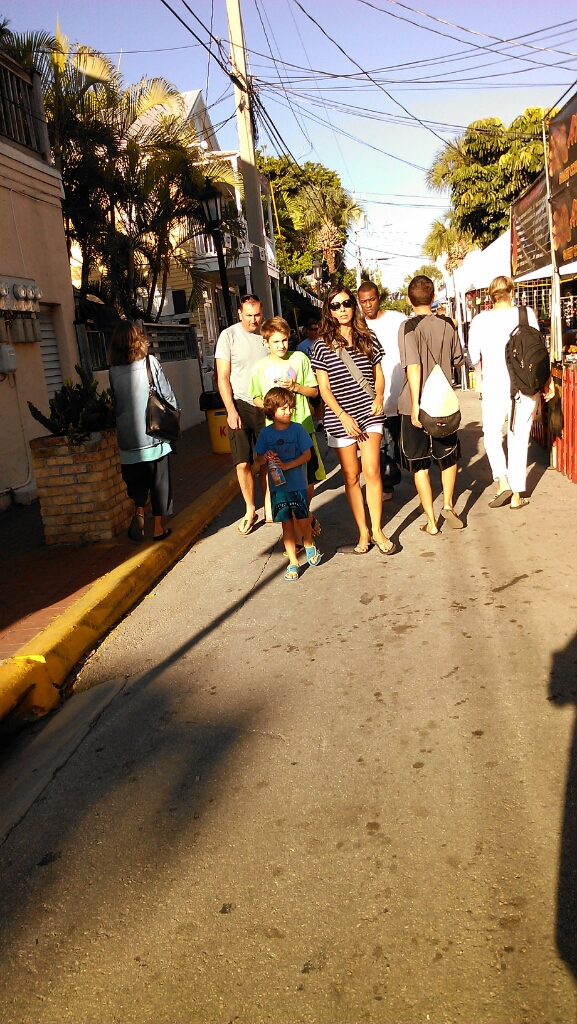 My other Goombay habit is to eat an "arepa" which food originates in South America and is utterly delicious. The best thing about Colombia is arepas and coffee for breakfast. Which may be an exaggeration but only slightly. In Key West arepas are festival food taken in winter. 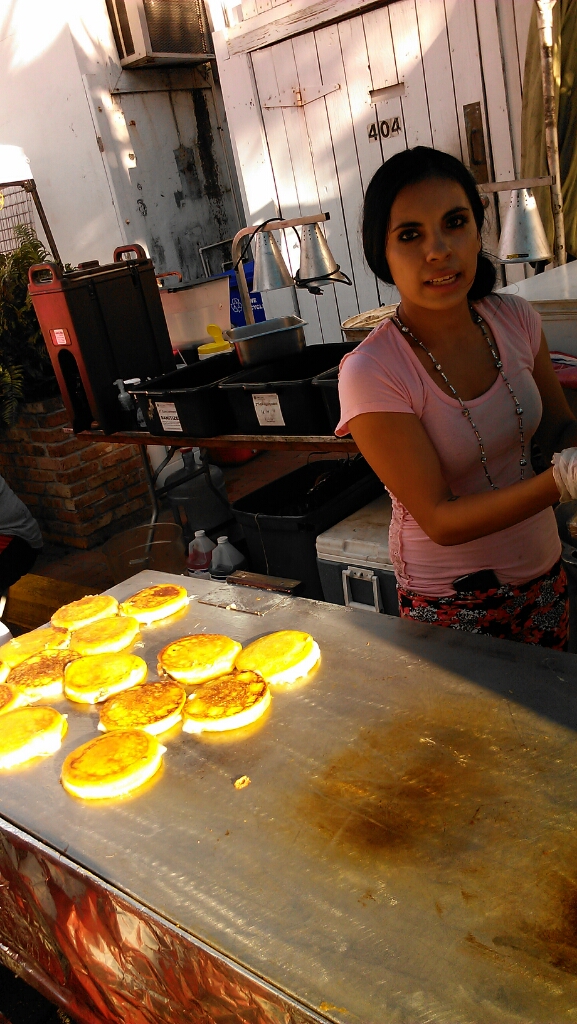 Frankly one could take several meals at Goombay, none of them especially nutritious lets face it, but all delicious. Sausages,chicken, steak,  pork rinds, corn in various formats, conch salad if you like raw mollusc. And lets not forget plantains which are actually eaten in the Caribbean. 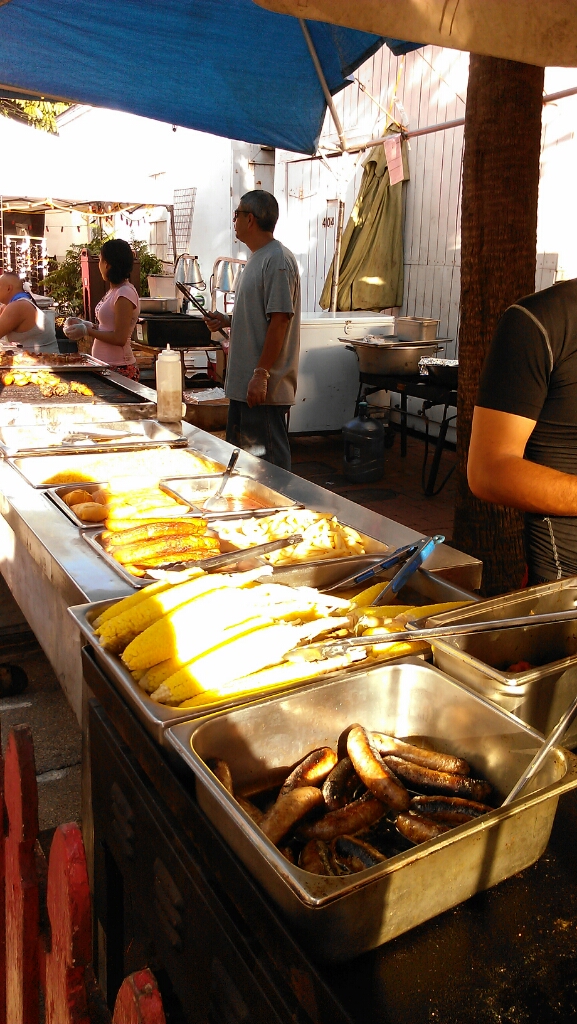 Plantains you say? A clump of adventurous eaters were looking askance at a plate of crispy fried wafers. Not bad one of them said crunching hard. Of course they're "not bad," oil and savory banana and salt. What's not to like? 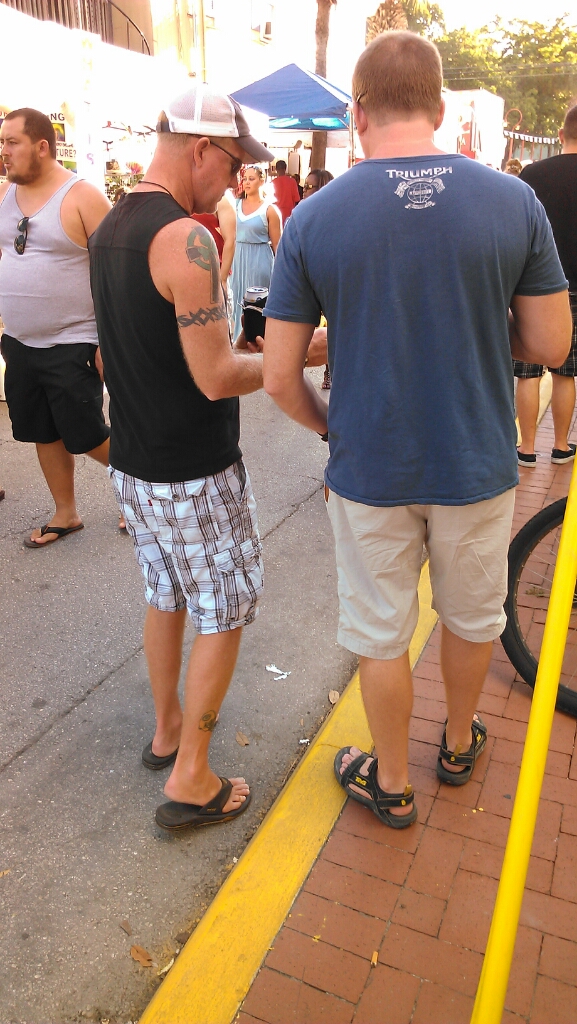 My arepa was bubbly and delicious, sweet fried corn on the outside and gooey mild white molten cheese on the inside. I was very restrained and only had one. 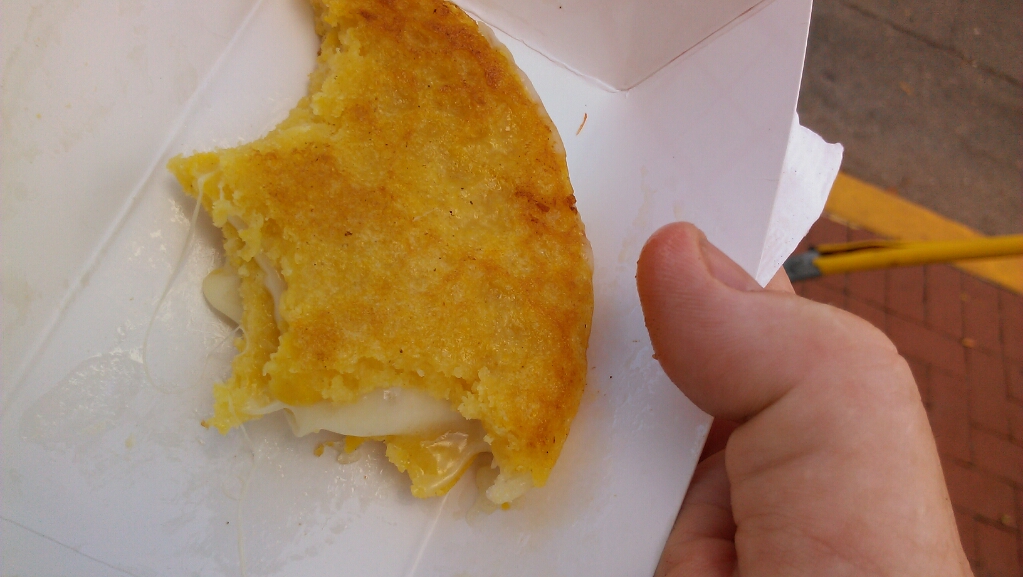 Goombay unlike Fantasy Fest which fires up this next week, is a family affair.  The newspaper reported this week that Disney has not one but two cruise ships coming to Key West next week. Despite warnings that the little dears might encounter some untoward free radicals and loose ganglies on Duval Street. I see more outrage and stern letters of disapproval on the horizon. 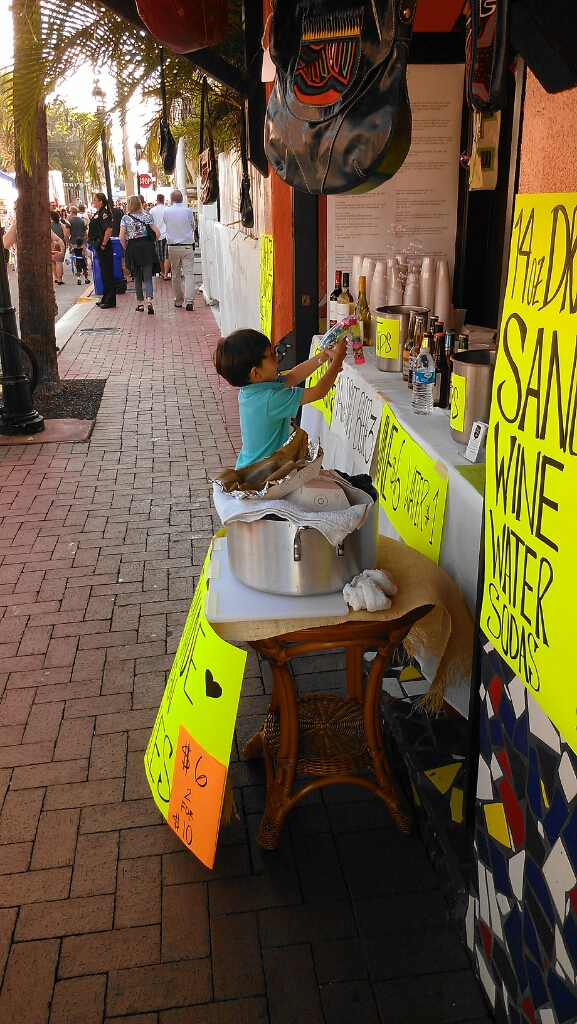 But for now people have their clothes on, the sun is shining and the second mild cold front of the impending winter has struck with delicious cool breezes, no humidity and clear skies. Utterly perfect weather to be out eating fried corn and drinking nectar. 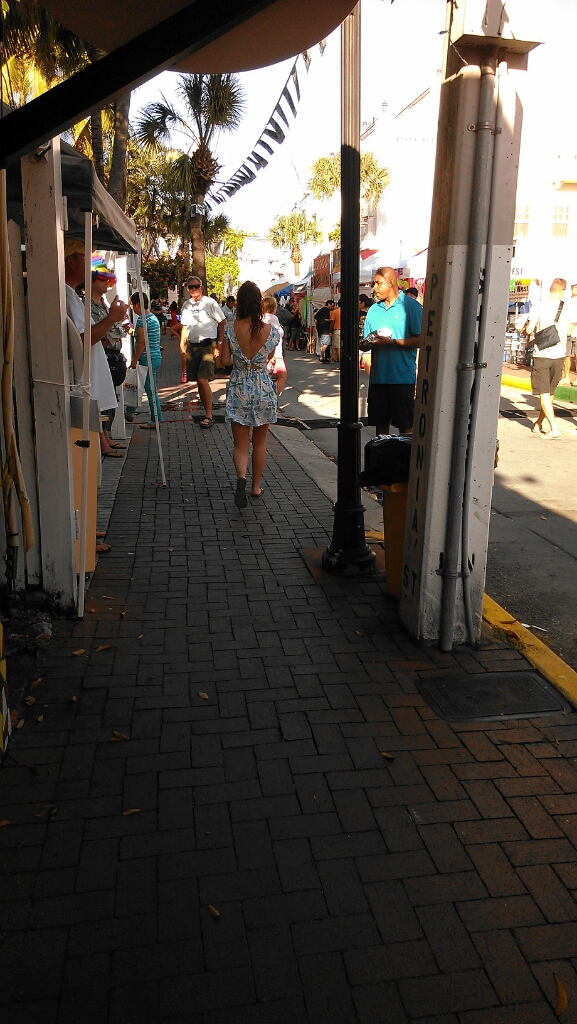 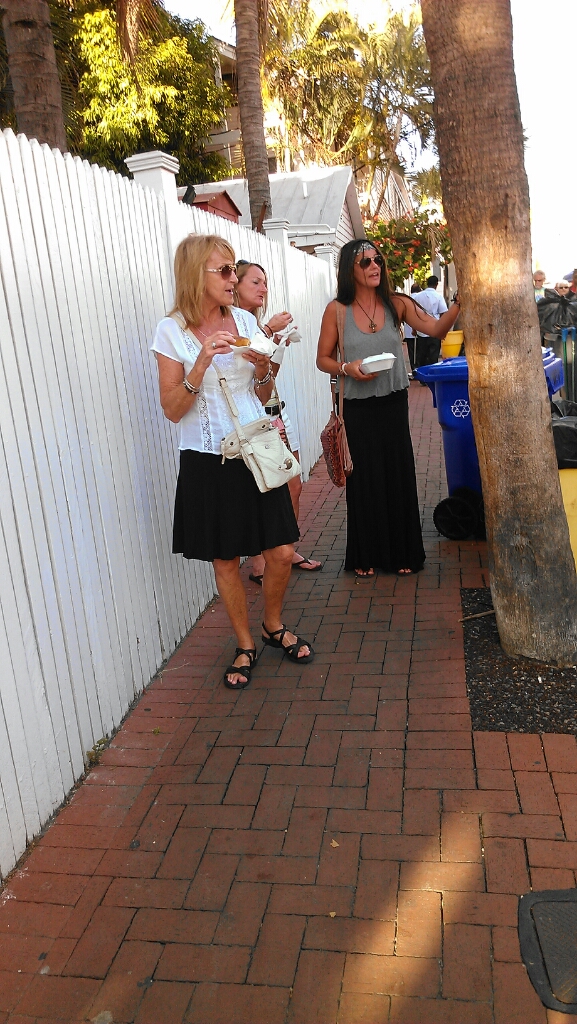 Someone has to clean up: thank you community services. 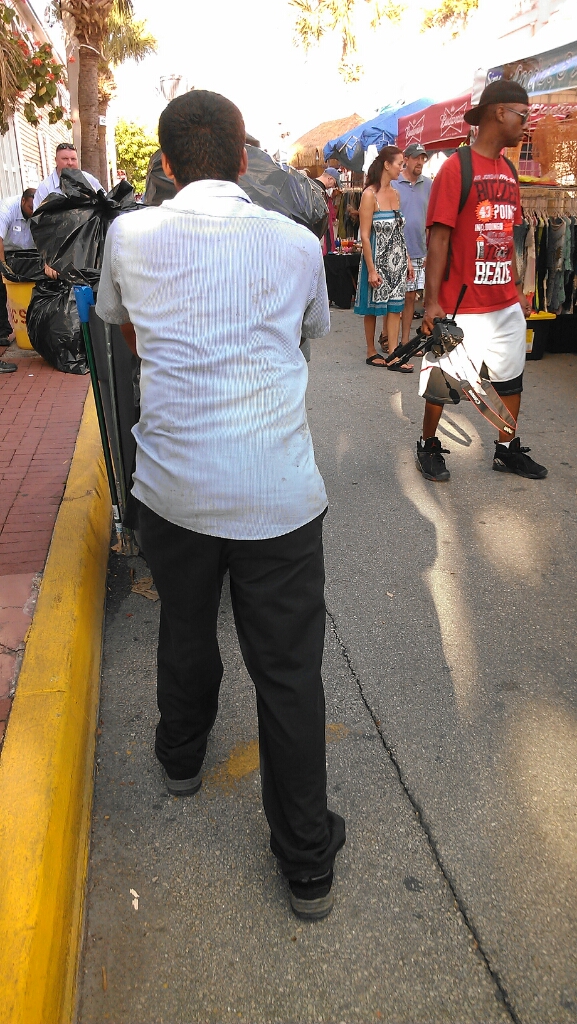 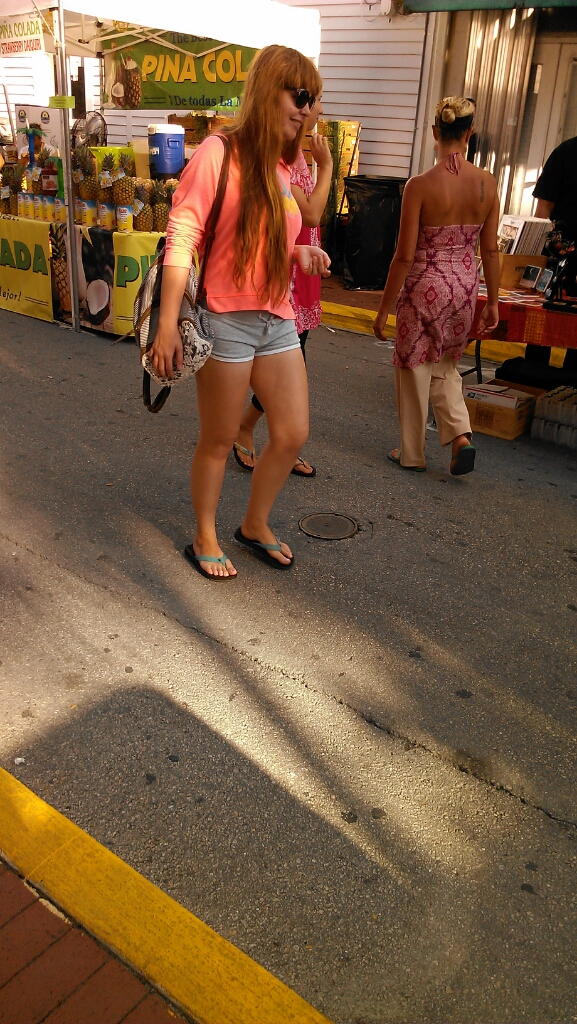 And then back to Duval Street which looked colorful and as festive as Goombay round the corner. It just gets more crowded and less clothed as the week progresses. Oh dear. 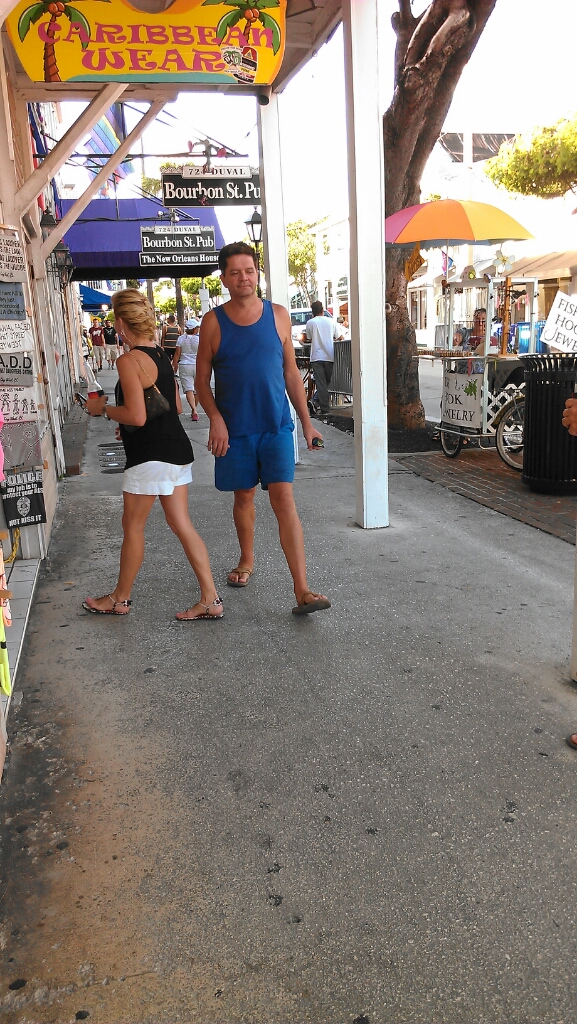 And with that, Fantasy Fest 2014 has kicked off with all the mixed feelings that it brings to this small town. On my way to work I passed my first painted face (body fully clothed thank you) peering out from the crowd on the Duval sidewalk. A white faced cat, a ghost, ahead of her time soon to be joined by a herd of odd and unraveled like minded partiers. Let the money flow.
Posted by Conchscooter at 12:00 AM 2 comments: