I had to miss a car rally on the loop road this past Sunday and I wanted to watch them. They are a long standing tradition on this circular stretch of perfectly paved road, another of those failed developments that benefit us in hindsight. So I took Rusty for a walk instead. 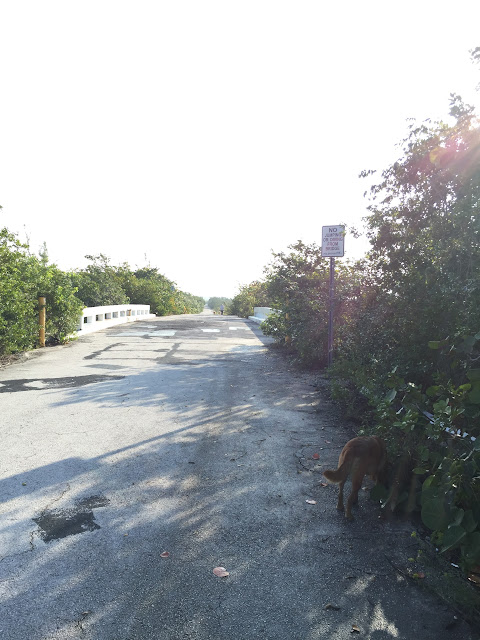 It's all hit and miss with him at this early stage of our lives together. A huge friendly retriever came upon us on the trail happily padding ahead of it's owner. Rusty is not find of large dogs and gave it a snarl through my protective arms wrapped firmly around him. I am getting used to his quirks so when he runs off in terror I amble after him and when sense takes over from panic he comes to me and we sort the problem out. 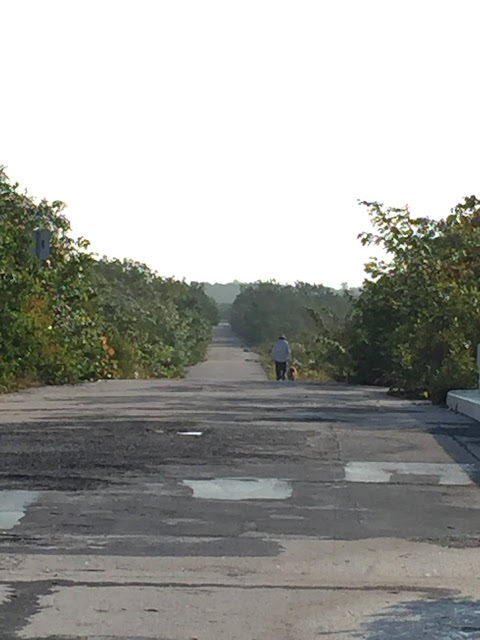 He is prone to start suddenly when a leaf skitters behind him or a tree sways in the breeze. He must have had a hard life. I think in six months he will have found himself and realize the world isn't out to get him anymore. At this stage I'm glad he runs to me to look after him. Makes my life much easier. 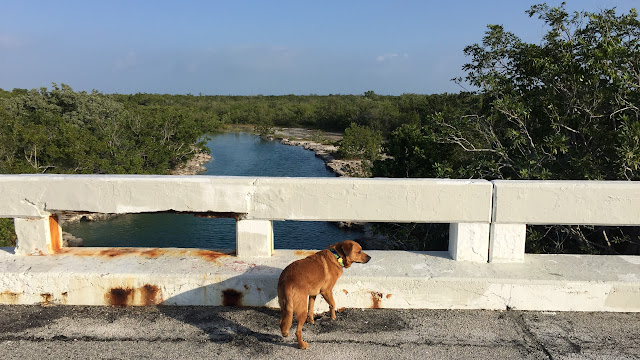 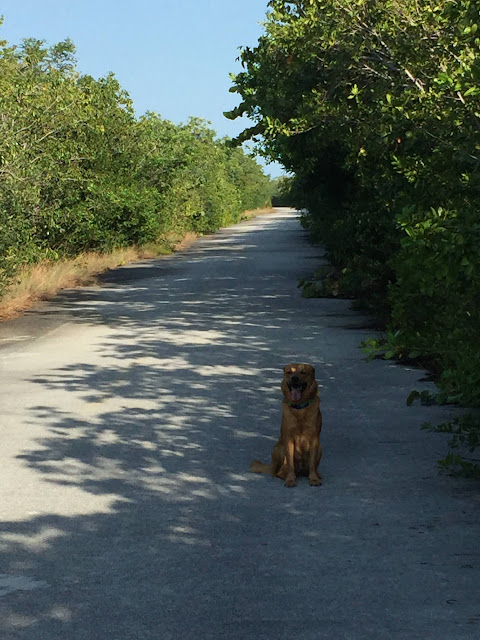 Rusty has this funny little way of running, he bounces on the balls of his feet and his hind legs splay out a little as he hops along down the road silently and speedily. He is learning to keep an eye on me and work with me as we travel. He is adapting nicely but of course a distant jogger set his nerves jangling. She paused petted him and kept going. 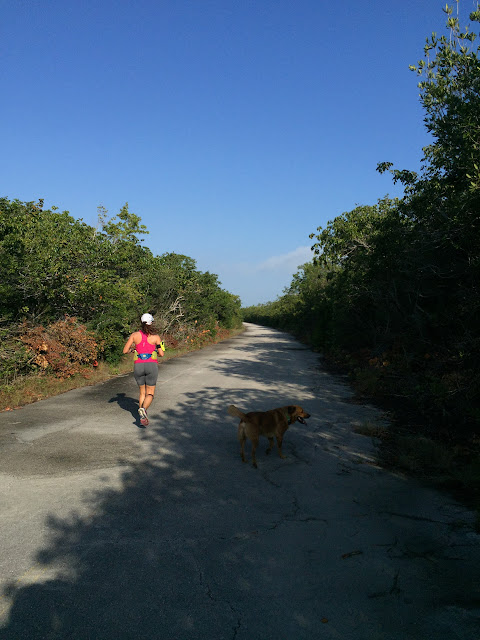 Mike came by in hopeless pursuit of his pink wife and stopped to say hello for a second. He is a friend of Prissy in Paradise and visits from Pennsylvania to get away from the cold. And he is sorry about Cheyenne as he has read this page so one has to assume he is an all round good guy. But he had to go to chase the woman in pink, or as he put it to not get lapped by her. 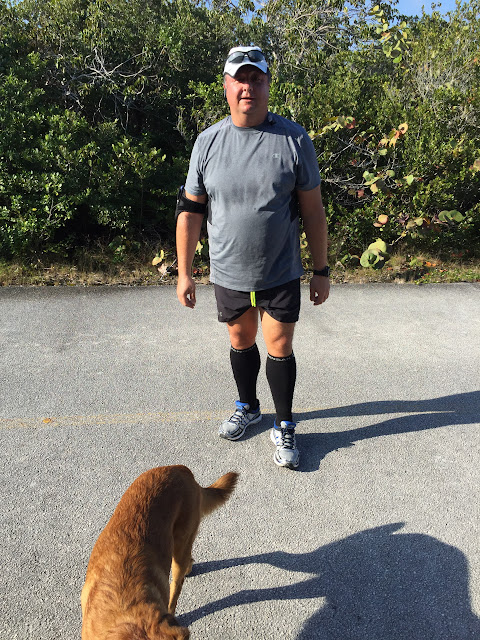 What a handsome lad, Rusty not Mike. 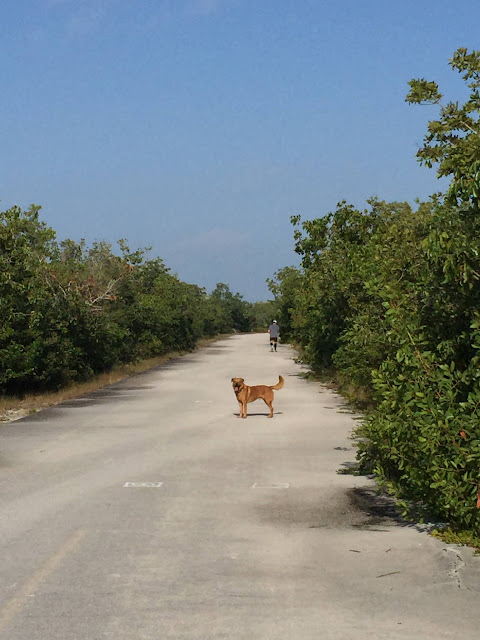 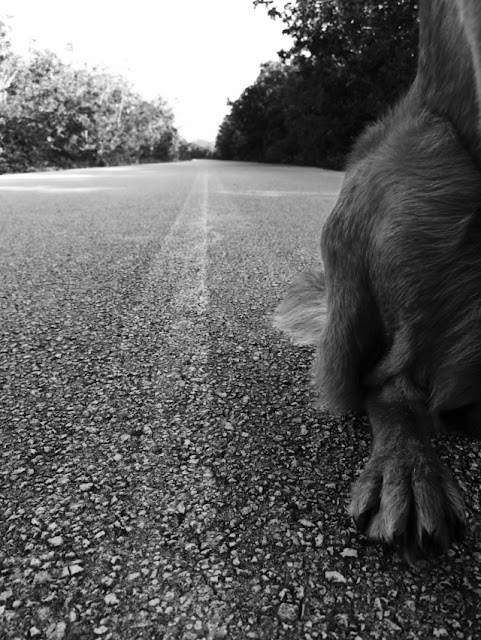 Rusty found water and liked it. 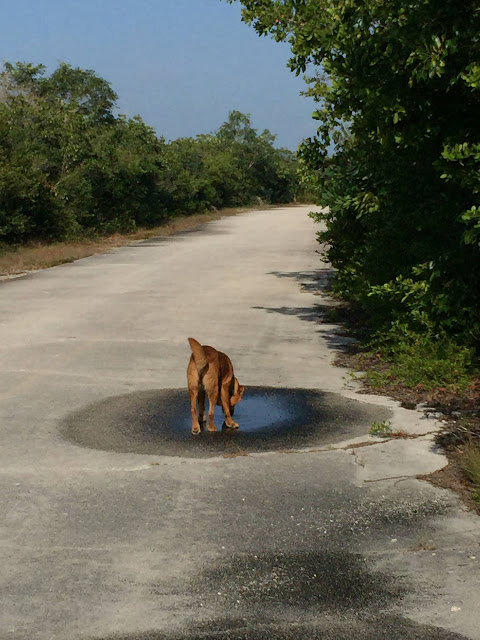 I haven't been here in a while but I remembered the canal front walk back. The remains of a VW van turning to rust seem to have gone though unless I was looking the wrong way. I think it's part of gentrification as the back country loses all its long deposited trash in the woods. 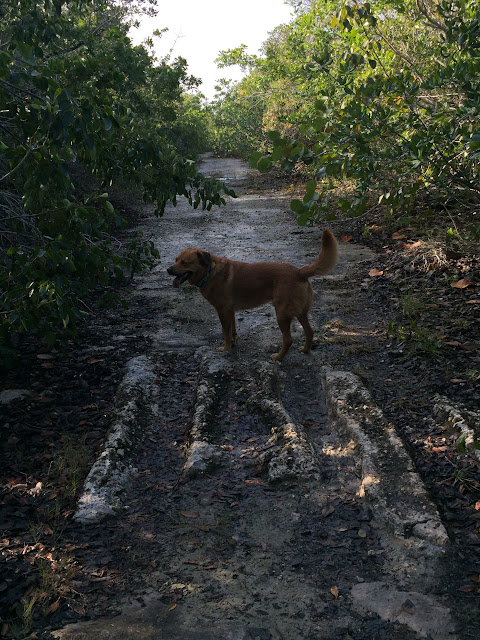 You can see a few of the houses across the canal near Sugarloaf Drive. Had the developers had their way this would all be canal side homes. 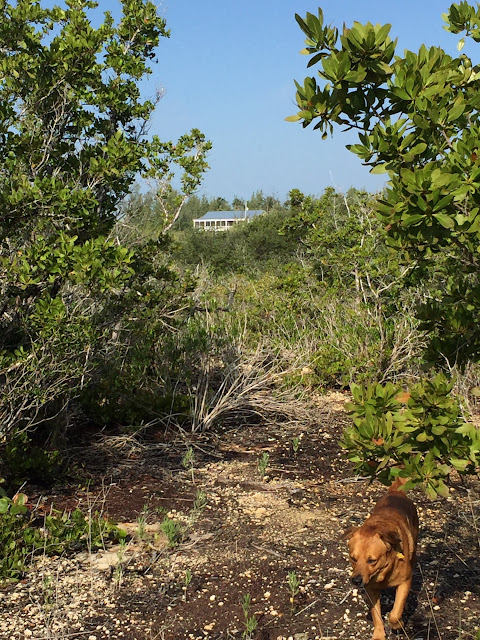 The tide was rising as the canal was rushing inland. 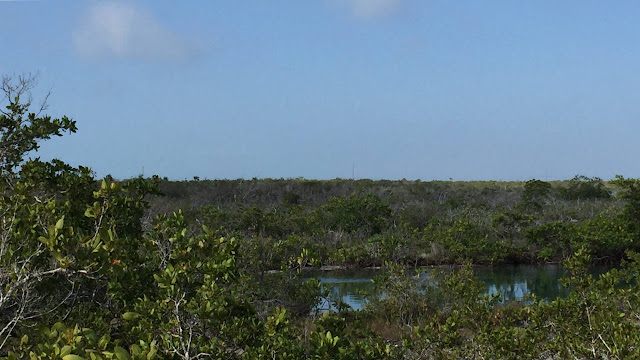 Rusty went nuts when we broke out into the open, running back and forth and waving his big flag of a tail. I wishes I was younger and faster to give him a run for his money but he was ignoring me, running in circles and enjoying the wide open space. 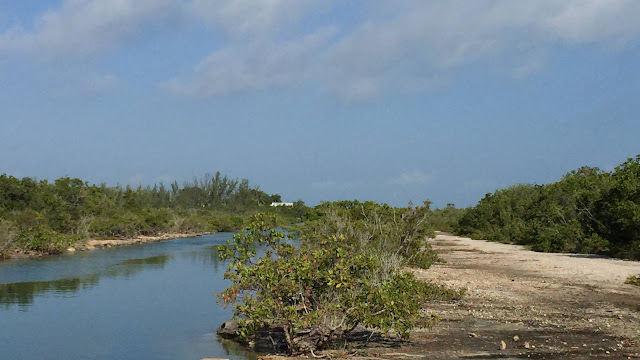 This was to have been a canal filled with boats and docks and stuff. 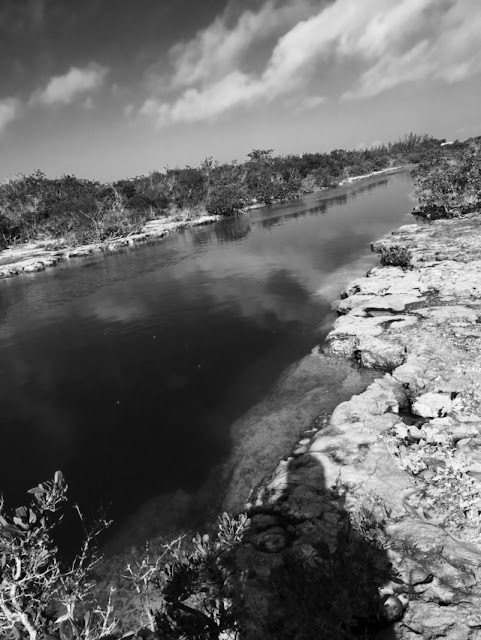 The canal was over flowing its rocky banks and Rusty and I soon found ourselves wading in water that he did not like to drink. But he sure had fun leaping and running through it. It did me good to watch little Rusty let his hair down without a care in the world. 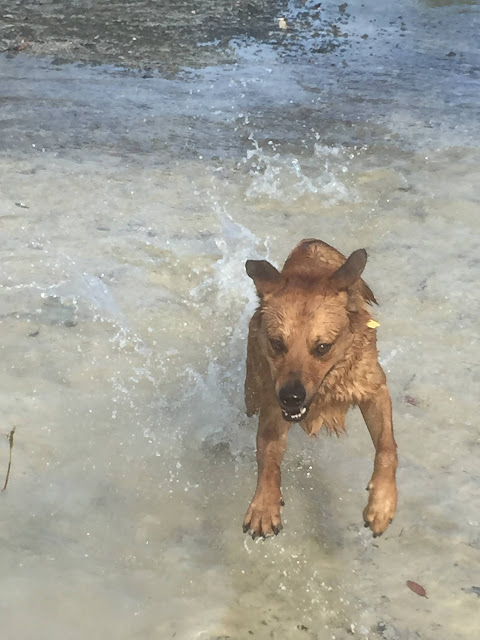 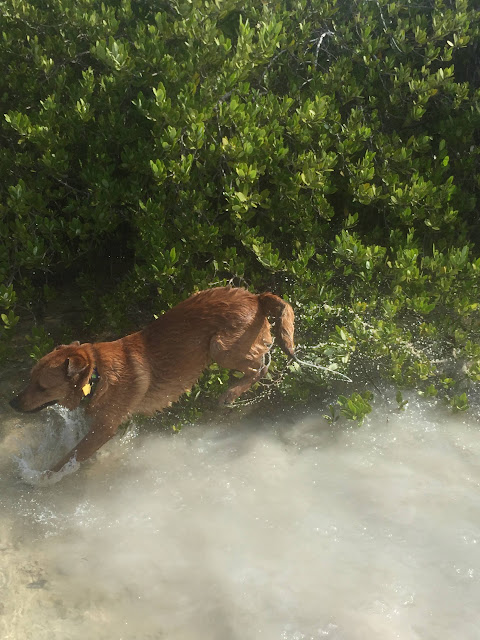 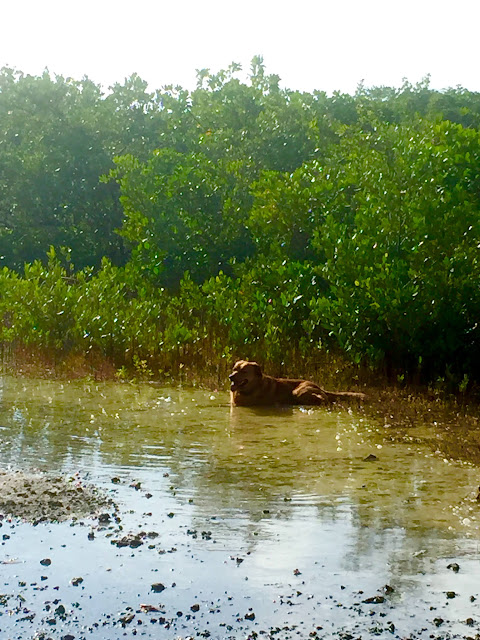 It got a bit deep in one spot and he started acting all timorous so I called him and waded on and sure enough he figured out a way forward to stay close to me. 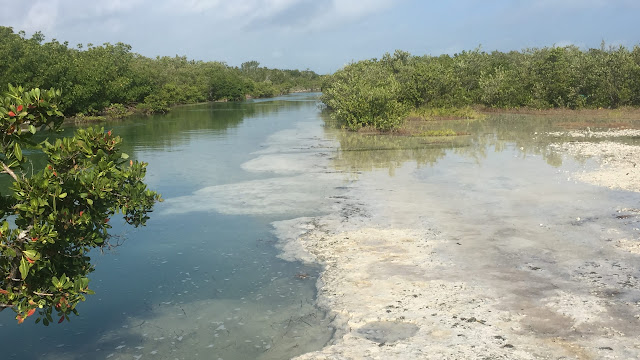 Soon we could see some stick figures on the bridge, almost an hour and a half since we left the car. 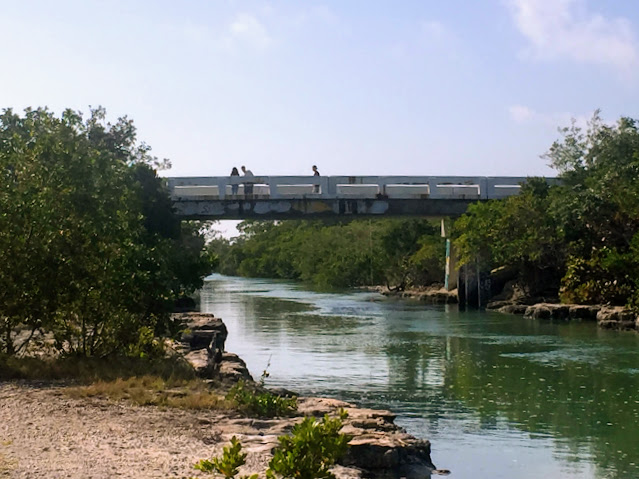 They asked me if the water was cold, as they could see I had done some deep sea wading to get to the bridge. I hate those kinds of questions because I have no idea what constitutes cold to a person from Pennsylvania. Clearly they weren't paying attention to my pink Crocs flashing "stay away"signs at them. 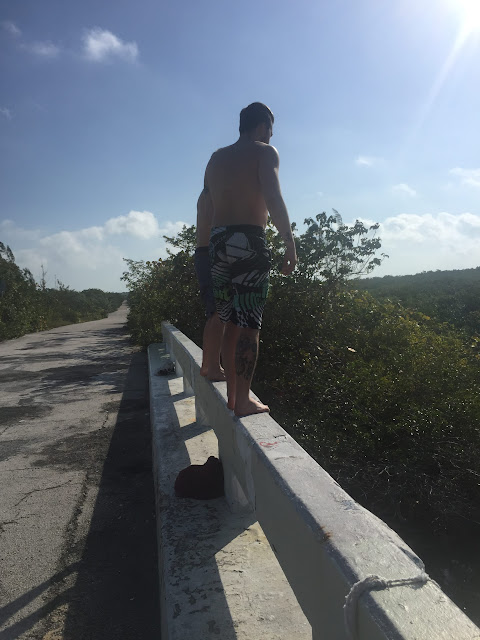 The testosterone overcame inhibition and with the young women watching (and filming) they jumped. 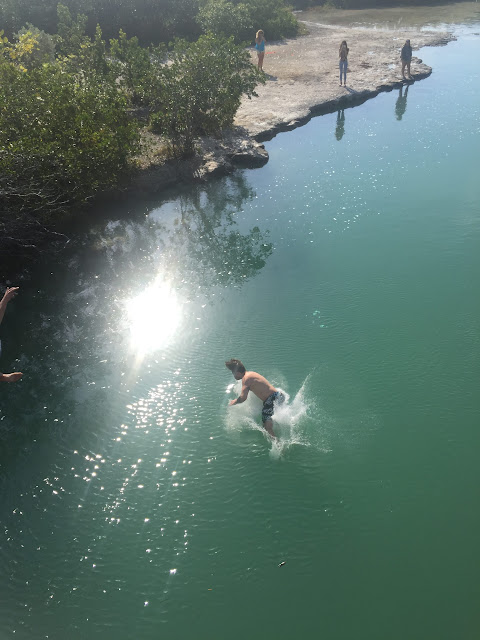 The consensus was that, no, the water was not cold, it was perfect. I figured I must have been wading in some particularly cold patch. That or people from Pennsylvania are especially hardy. 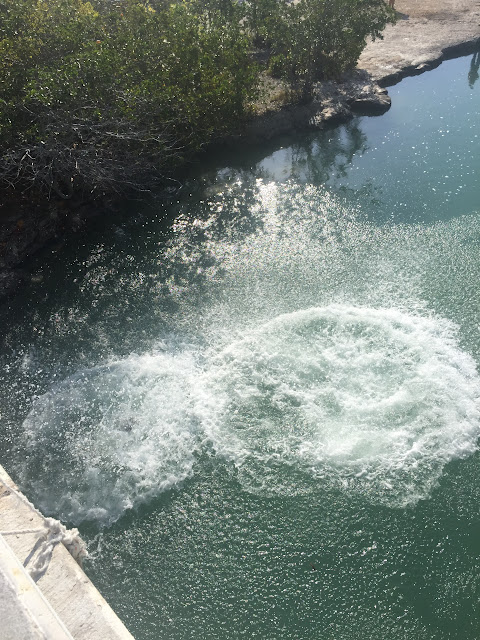 I left them to it and to reap their hormonal reward from the interested distaff spectators. 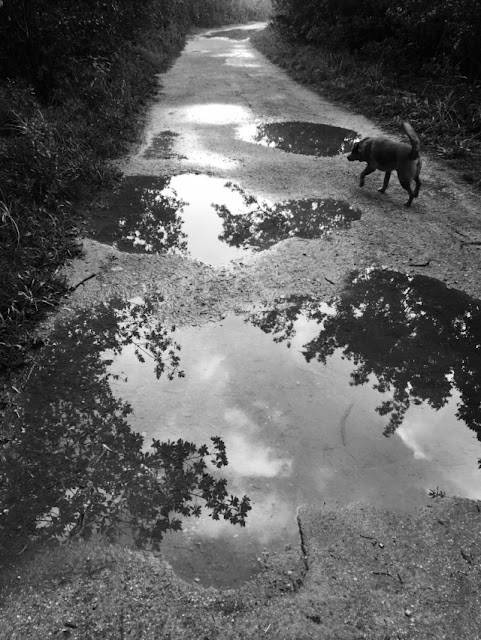 There's a cold front scheduled later this week. I'd love it if I could get him down the path of doom on the other end of Sugarloaf. I haven't done that in years since I wore Cheyenne out on the trail and had to carry her... 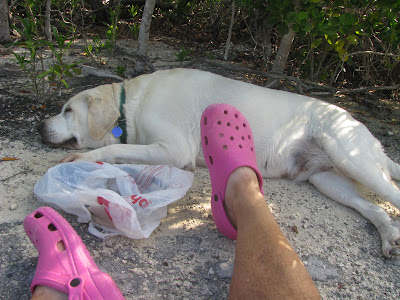