I don't go to Boca Chica Beach that often but every time I do I want to take a million pictures of a place that makes me feel better. Check this out: no horizon, sea meets sky and no clue where the join is: 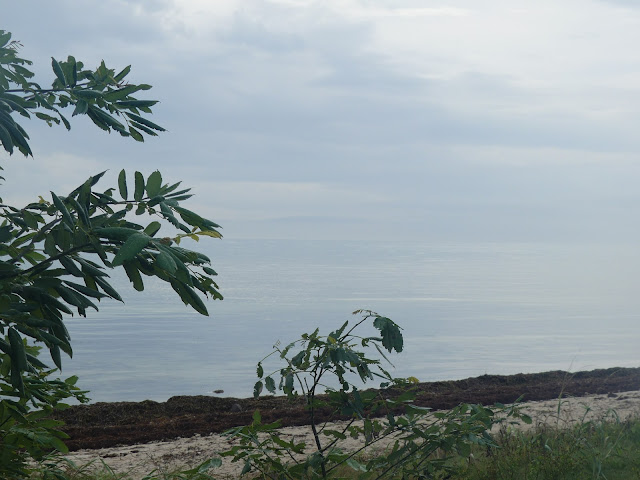 I needed to get away yesterday as I have been working non stop for as long as I can remember. On December 20th the police department changes it's entire computing system for everyone and in dispatch we are the point people on the new system using it to take calls and dispatch officers and fire/rescue. 911 calls will arrive as usual and we all have to know how to put calls in on a completely new, modern system. We will come into work and it will all be changed just like that! So now we are frantically trying to learn how to cope even as we continue to work with the old system which in its simplicity I will miss dearly. It only worked for dispatch but it was perfect for our needs. No one else in the department knew how to use it because it was incompatible with any internet based computing. Even many of the IT staff stayed away from our computers as our little network was so weird. 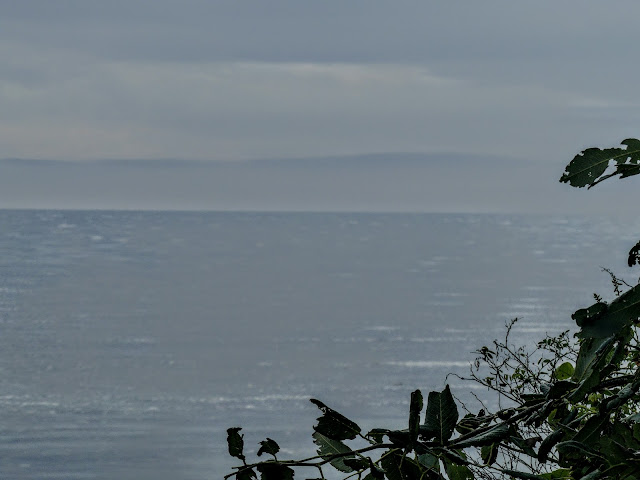 I know change is good and I know modern policing requires integrated portable computer communications as well as old fashioned radios but the old computing system was designed for dispatch and as hard as it was to learn, after a  dozen years using the AS400 now I am learning to use a windows based system and its hard in its newness. I wake up tired and I go to sleep tired and in between I'm trying to figure how to do this or that on the new system. 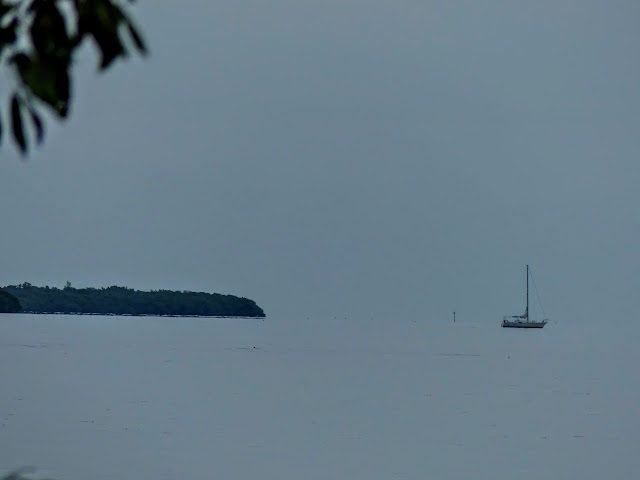 There was a time there I wondered deep down if I was able to change and adapt and if I had reached the end of the road. Part of me doesn't want to change and part of me is just tired of change. I read how old age support is under threat from Republican members of Congress who think destroying programs created to prevent destitution is somehow a Good Idea. I read how Trump voters now find their health care under threat and hospitals fear for their futures now they have patients whose bills are paid regularly and who in future may have to go back to unpaid services and uninsured customers. Change sometimes seems like a really bad idea. 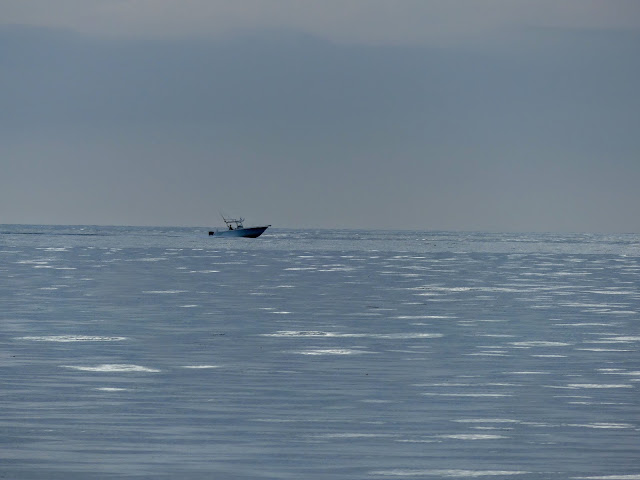 So I turn to my consolation who is always overjoyed to see me when I get home from work. And together we went off to the beach for a couple of hours. 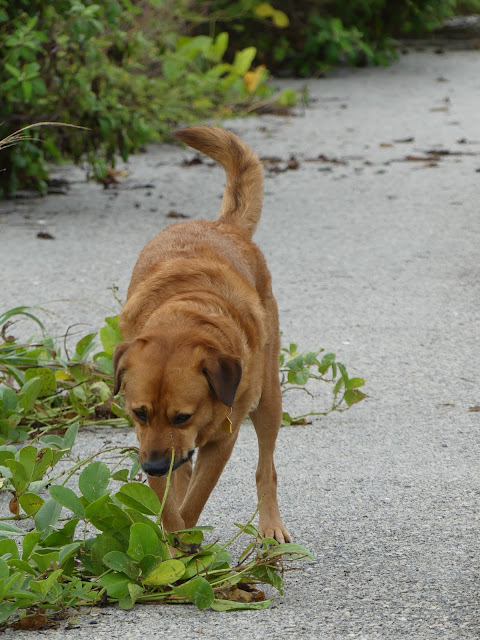 It is kind of odd walking along a fence next to the runway of the Navy Base where they train fighter pilots to take off and land as though on an aircraft carrier. 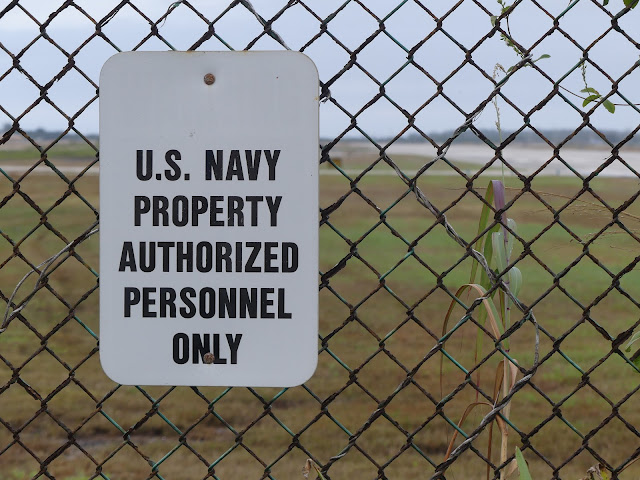 Thinking about something other than work caused me to spend some time pondering the meaning of jet fighters in the modern age. I think of old men in Washington ordering drones around half a world away and I don't really get the point of having men jetting about in a way reminiscent more of World War Two than 21st century computerized technology. Reality seems to indicate a move away from old fashioned technology like my work computers and jet fighters and into a Brave New World. But they still buzz around in circles making feints and passes like they are in Sopwith Camels. 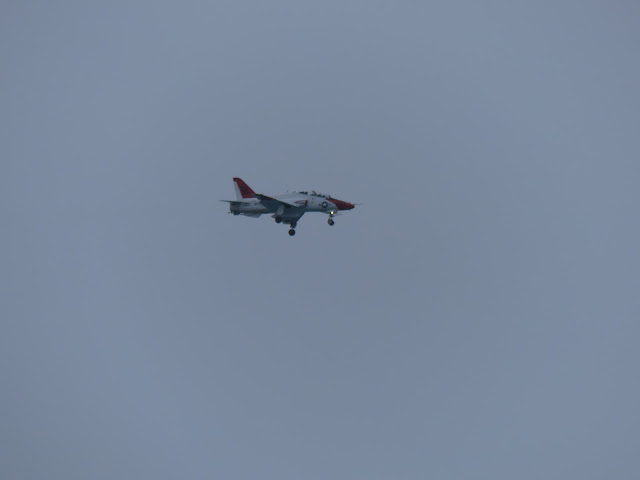 Birds seem to have it so much easier sliding silently through the air unnoticed, like drones. 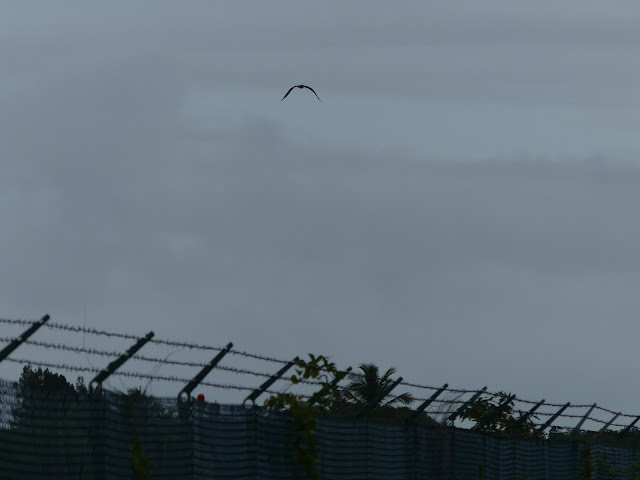 It's getting organized around here with a trash removal system now in place, apparently, yet some half wit still managed to stuff some trash in the "removal only" bin... 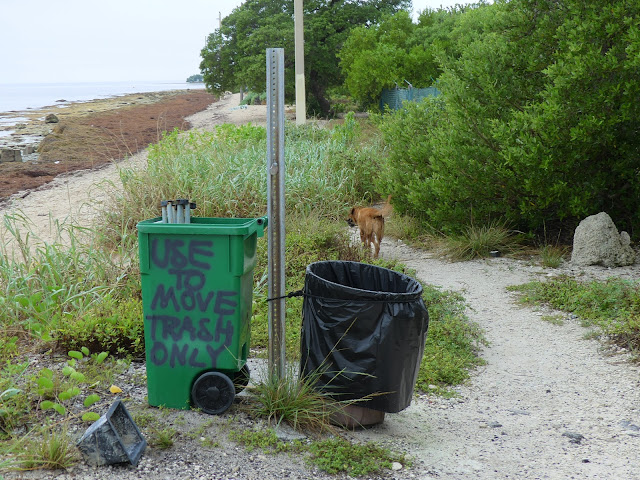 Rusty got into the spirit of the thing immediately and shook off all those cares he deosn't actually have. 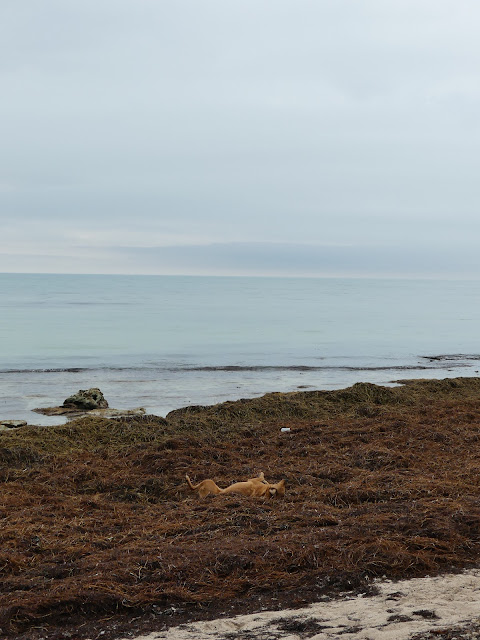 While he wandered around and chased seaweed I started playing with the telephoto lense on the Panasonic. It is quite powerful and it was while I focused on the birds and the channel marker I became aware that the log in the foreground was  a person taking a bath. Which surprised me as there were no cars of any kind parked at the beach when we started out walk...That I was alone yesterday morning surprised me of itself as the beach is generally popular. So where did this dude come from? 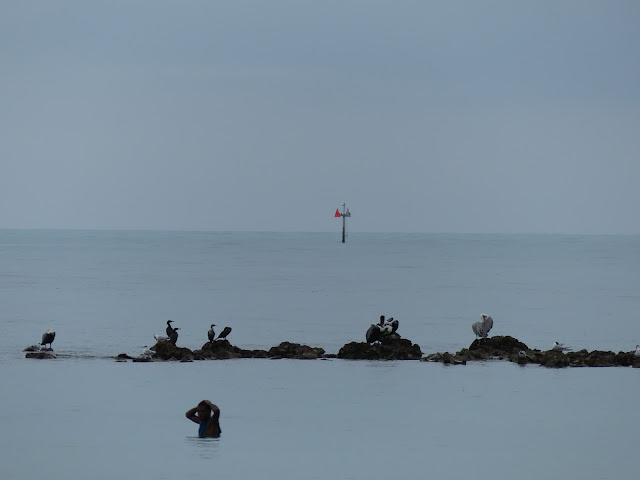 And out at sea the boats keep buzzing about. 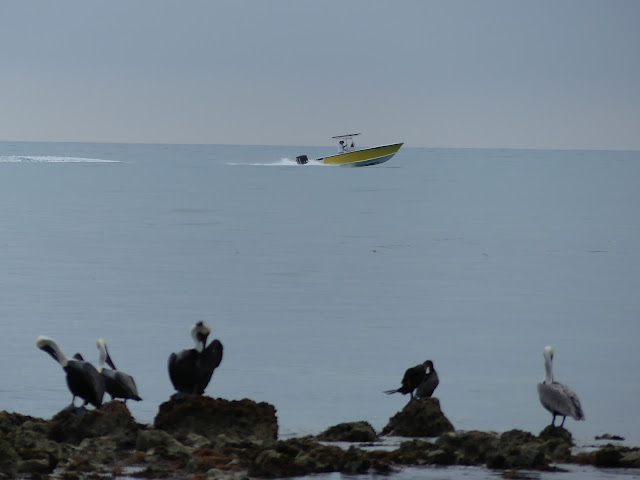 The tide really was a long way out and it made it very easy to cross the breaks where the inland lagoons spill out to sea. 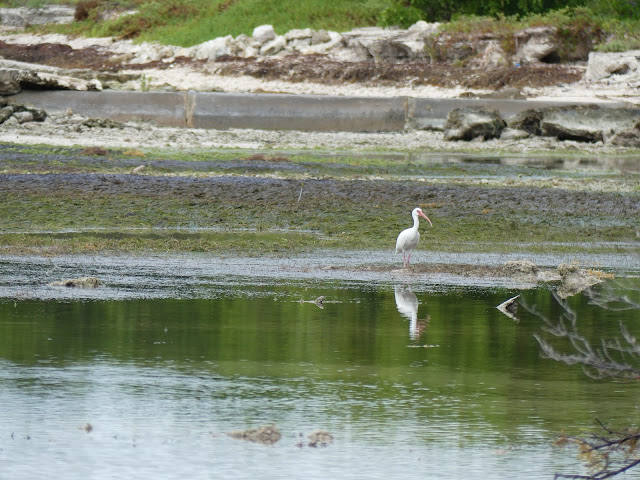 At regular tides these rocks are under water. 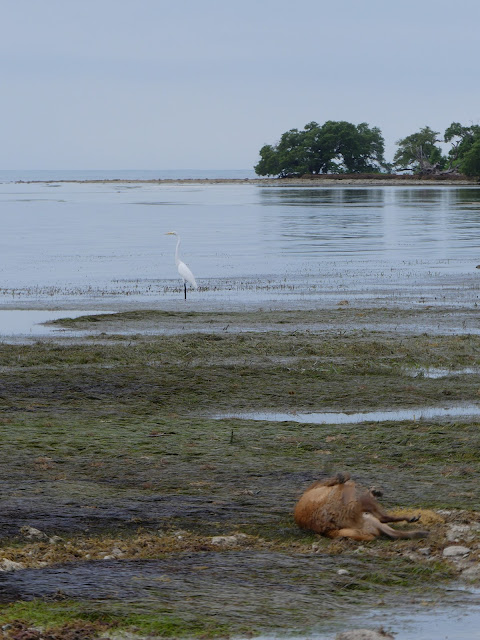 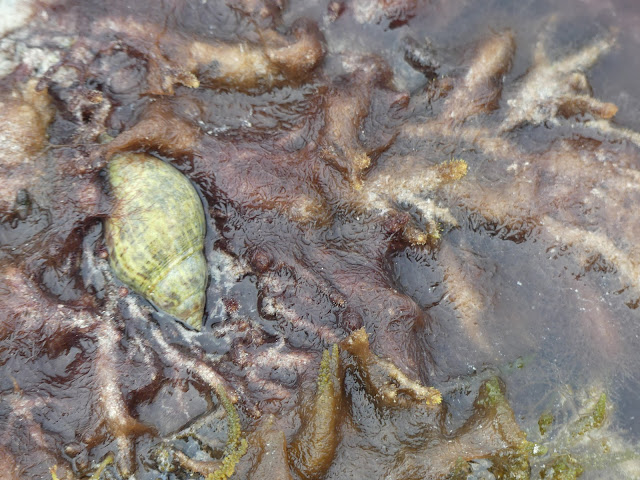 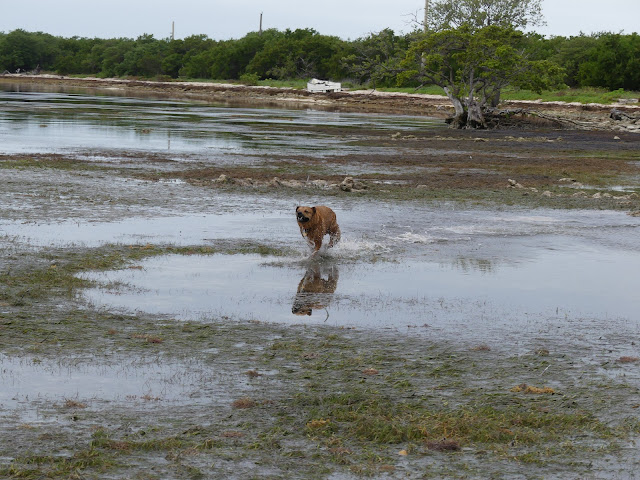 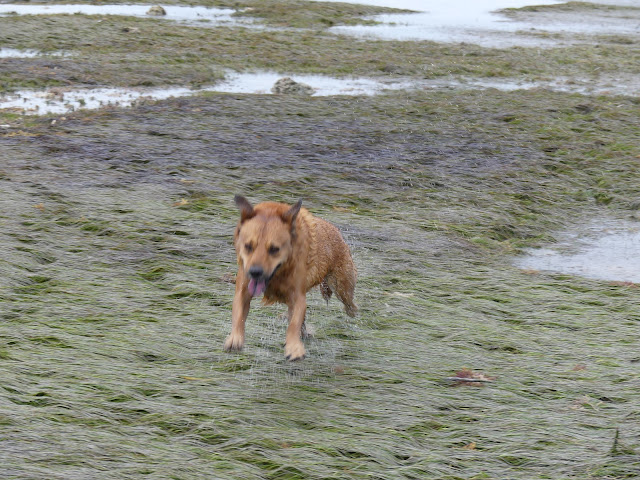 And watching over us the tower at the Boca Chica base. The Navy Base makes this whole strip of land possible essentially. It used to be a roadway to Stock Island but now it's a wilderness and lovely it is too. You follow little paths through the bushes and mangroves or walk the beach and to your right is the boundary fence of the Navy Base. Its that simple. 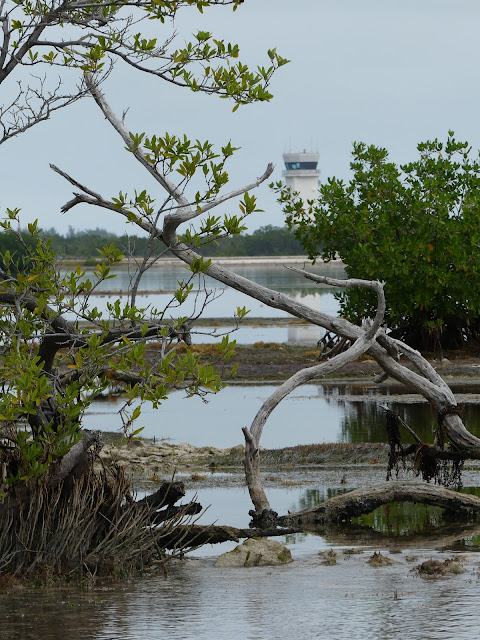 I strolled and Rusty ran, forming his own circles. I amused myself with the camera. 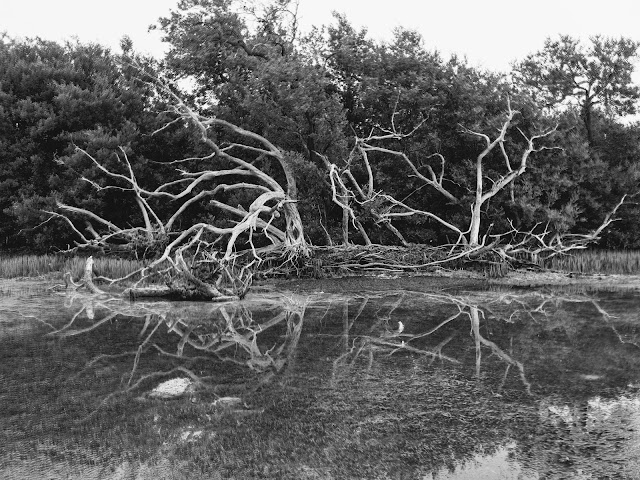 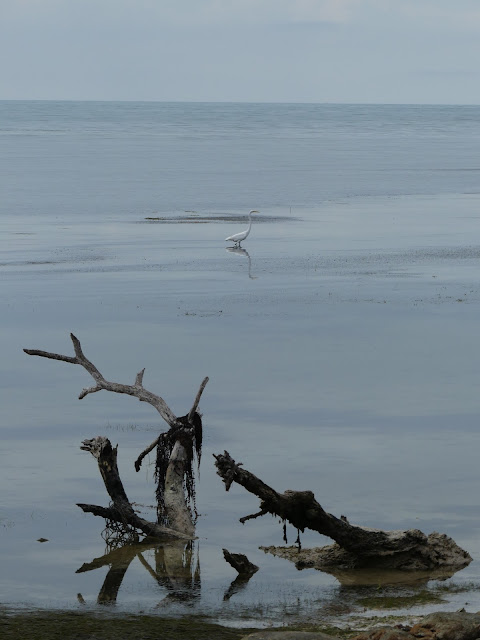 I am convinced by the trash I find that ending commercial boating would restore the oceans faster than anything. Fried shrimp chips from Thailand in an indestructible metal can? What cruise ship or long line fishing boat did that get dumped off? 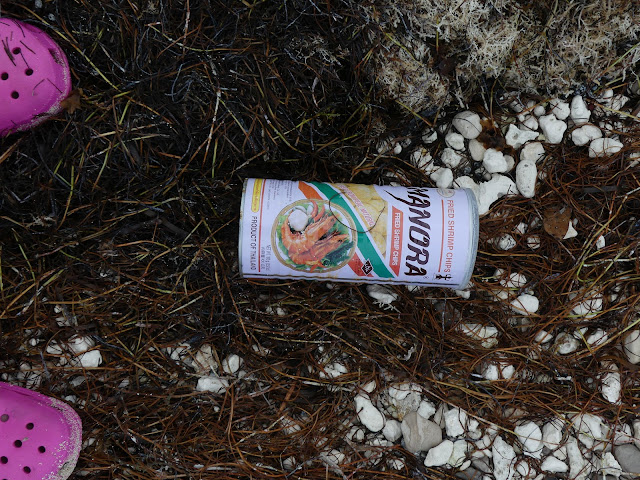 And then there are the Cuban chugs bringing refugees in weird craft across the Florida Straits. This one is styrofoam with gunwales made of wood planks through bolted. 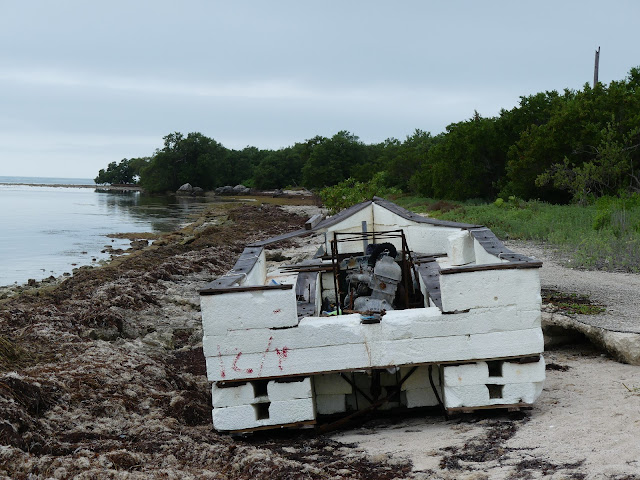 The gasoline engine had a Lada filter on it with writing in Cyrillics...That made me think about how much we have diverged with Cuba over the decades. Russia seems so far away yet their world has washed up on a tropical island just over the horizon.  And its all as alien to us as though it were from outer space. I hope business sense prevails over the crazy Cuban family feud between the Diaz Balarts in Miami and the Castros in Havana and things continue toi improve with Trump in charge. 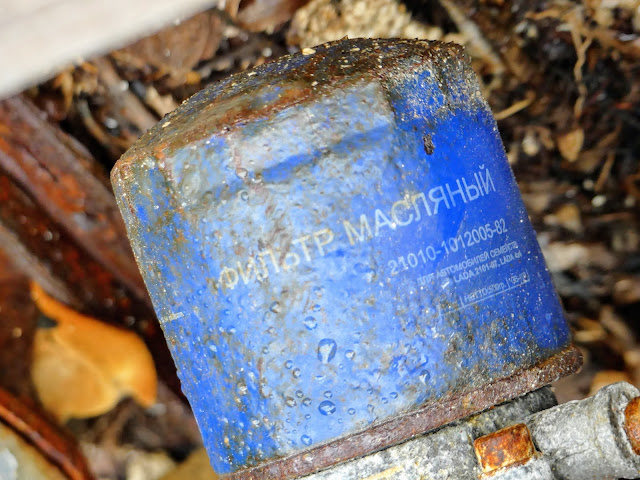 It makes you realise how much they want to be here when you see the improvisational skills they deploy to get here. A car engine held together with bailing wire... 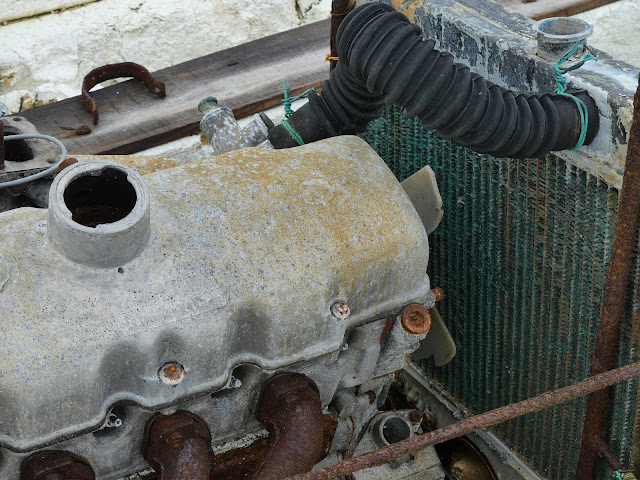 The guy on the beach was dressed by now and poking around on the rocks. I met him on the walk back and said good morning though he just pretended I wasn't there. He was young  and thin though he appeared bulky as he was covered head to toe and across his face by clothing in an effort to keep the insects at bay. They were vicious and sought any scrap of my skin not directly doused with repellent. 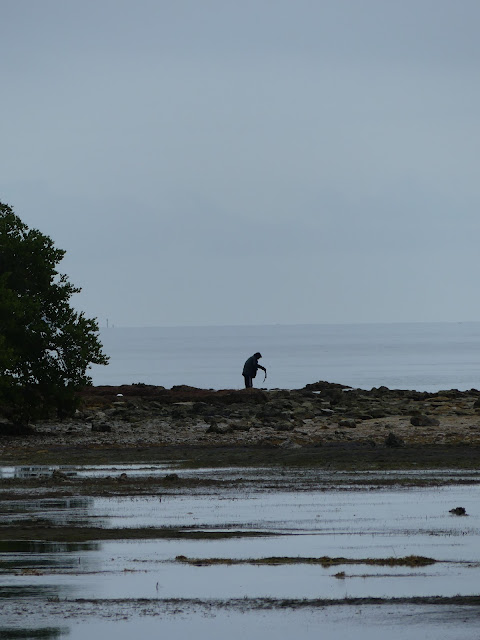 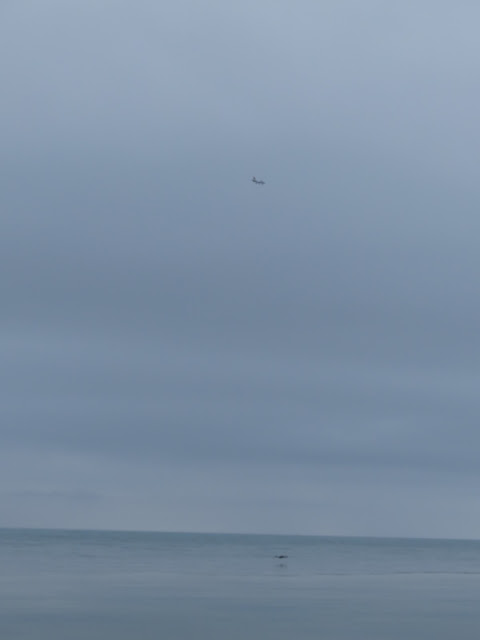 He sat down to rest from time to time. I really am fond of this dog, he works so hard to meet my expectations, so he always comes when called these days and takes pleasure in every part of his life in a house. He is a quick study. 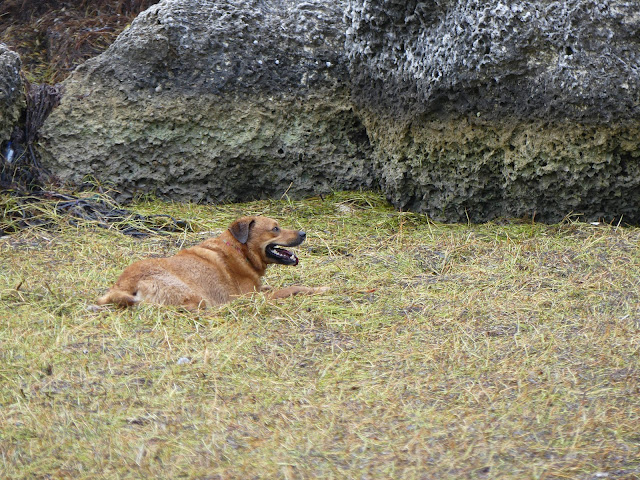 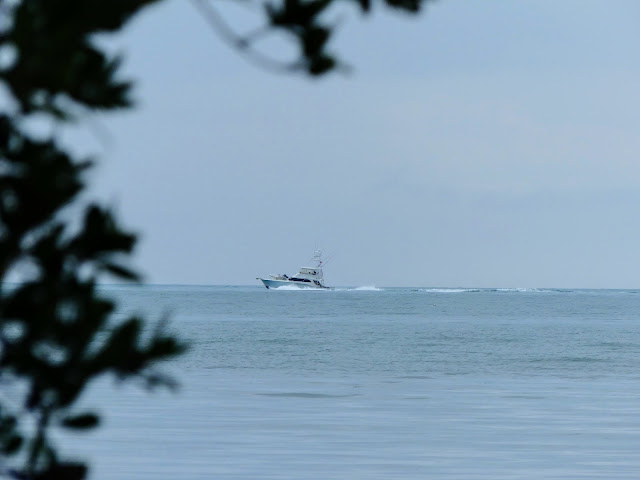 This was not a Cuban chug though it might have found a higher calling had it washed up on a Cuban beach as a solid fiberglass hull would be quite the upgrade for the refugees. 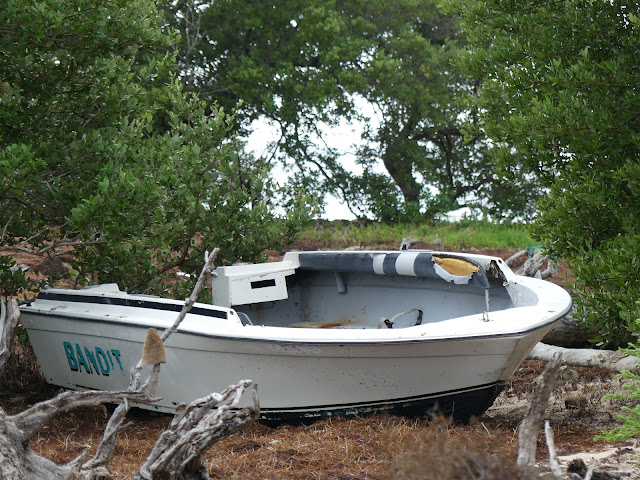 It was a really great way to clear my head, a couple of hours on Boca Chica Beach with Rusty. 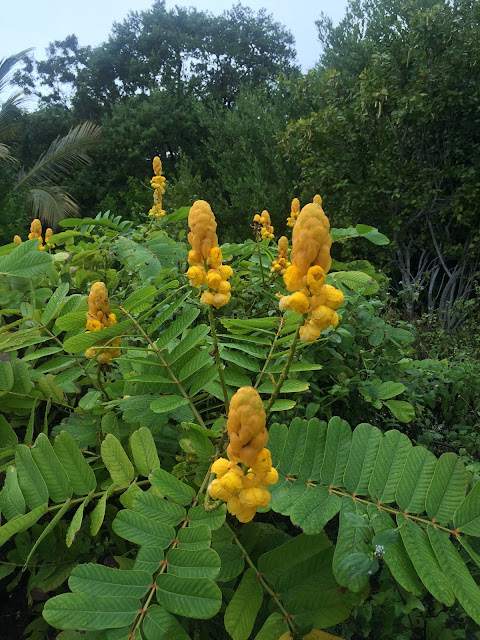