If you are driving through Marathon and both you and Robert are feeling hungry you might decide,as we did, to stop at Burdines and eat a burger. This is not Burdines the department store, this is Burdines the Tiki hut above the water where they sell a none dollar  burger with green chilies that will, as the saying goes, make you slap your momma. Something like that. 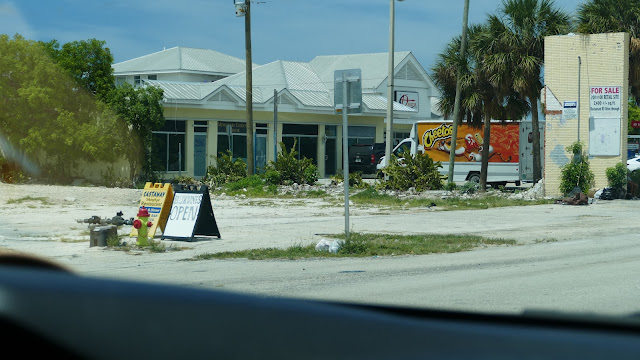 Burdines is at the end of 15th Street (Ocean side which means on the south side of US 1. The north side is called Gulf Side by residents of Marathon). Its the point on the highway where four lanes become two in Marathon and that';s how I directed Robert to the side street as it had been a while since either of us had been to Burdines. 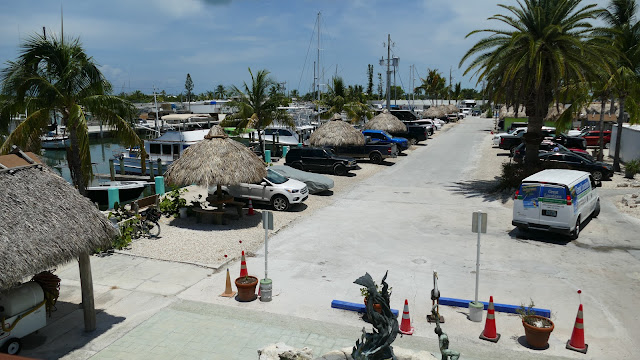 It was a hot walk across the parking lot but it was worth it.  I climbed the stairs like a man who never had his pelvis broken for him and when we  were at the top they directed us to a bar stool which is not how I eat lunch. A table with a chair at the proper height so my feet reach the floor and a pleasant view of water, boats and sunken boats. 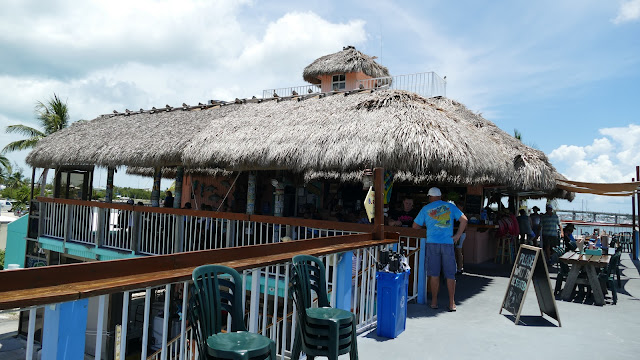 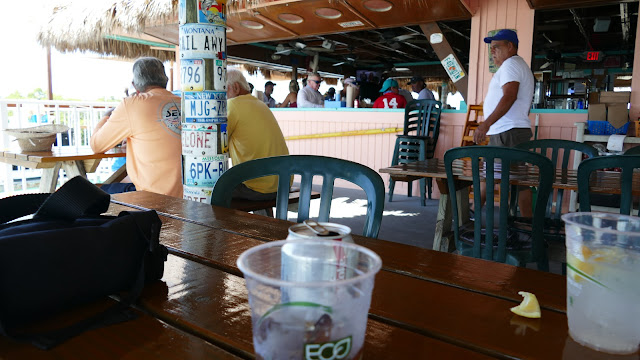 That's the green chili burger which is best eaten with a knife and fork. Robert had  a modest cheeseburger with no buns and a side of salad. I had Burdines' specially seasoned salty fries and quantities of Diet Coke to fend off the heat. You can't eat like this every day but once in a  while it really is the way to go. 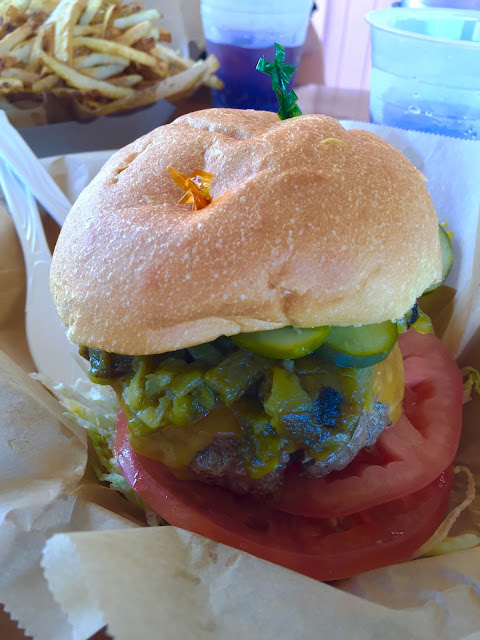 After lunch we wandered out into the sun for pictures and a taste of the breeze and the view. 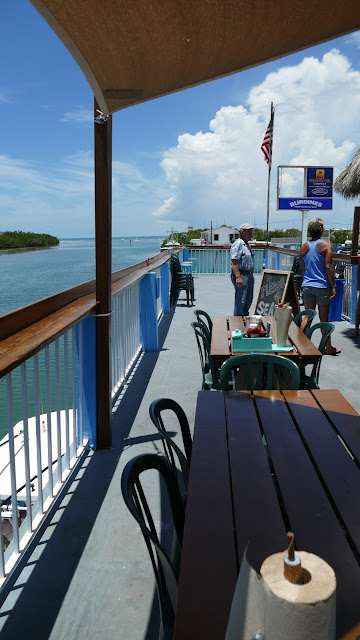 Marathon is a working town of some ten thousand people, maybe fewer since Hurricane Irma I'm not sure. Unlike Key West this town, the second largest in the Keys, has commercial fishing  as witnessed below: 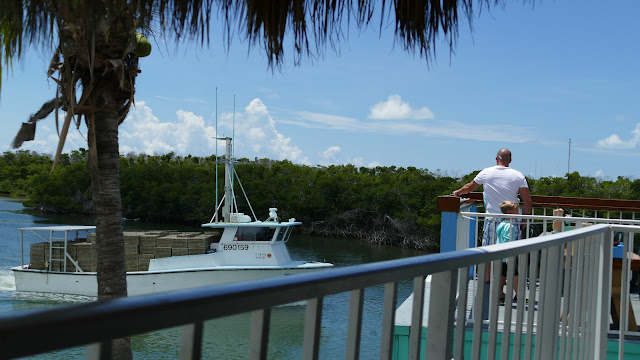 Looking east from Burdines the marina that used to exist has been torn up supposedly to make way for more modern facilities which never appeared. The bridge in the distance which connected uninhabited Boot Key to Marathon has had it's span removed as the bridge was crumbling. The radio station staff on Boot Key get to work by boat, so that is that. I used to like walking there when I was in Marathoin as there was nothing there but trees and a road. 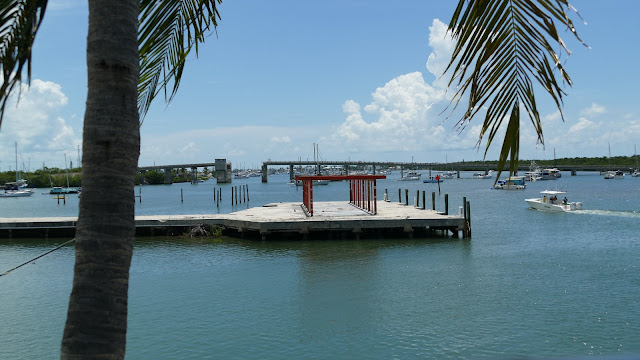 Marathon has a really nice harbor surrounded on all sides by land. The city has put moorings in Boot Key Harbor and operates  a marina with all facilities a passing boat crew might want, internet access laundry facilities and so forth. In winter it is quite the hub for boaters passing through the Keys. 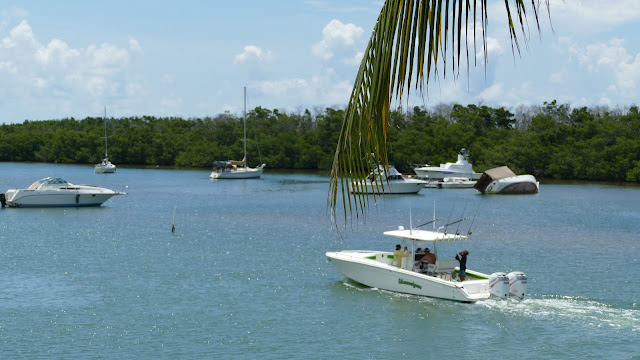 I bought a new (lightly used) camera and so far I am quite pleased with the increased megapixels from my old Panasonic which I am keeping for back up as the 12 megapixel FZ300 is very rugged. The FZ1000 has 20 megapixels on offer with a shorter telephoto but I really like the pictures I am getting from this camera. In the old days I had cameras with interchangeable lenses and all the Single Lense Reflex folderol but in this brave new age I like the modern digital "bridge" cameras which look like SLR cameras but have fixed telephoto lenses, no internal mirrors and do a very decent job for an amateur like me of covering all bases for not much money ($350 in this case on an eBay auction).
I very much like my iPhone camera but I do enjoy the telephoto and the ability to have some control over the pictures I take to improve depth of field and to be a bit more adventurous with shutter speeds and so forth.  I got a rather nice portrait of Robert too. 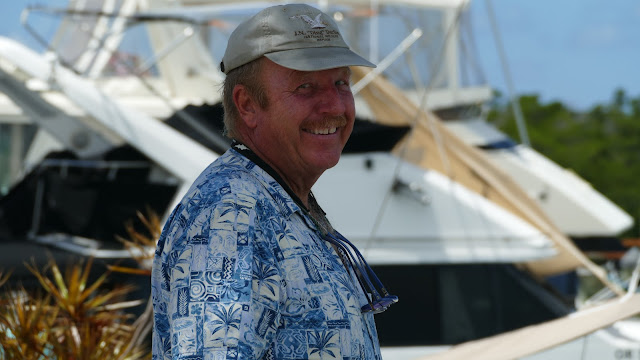 Boats can be complicated things and sometimes they seem to prefer not to float: 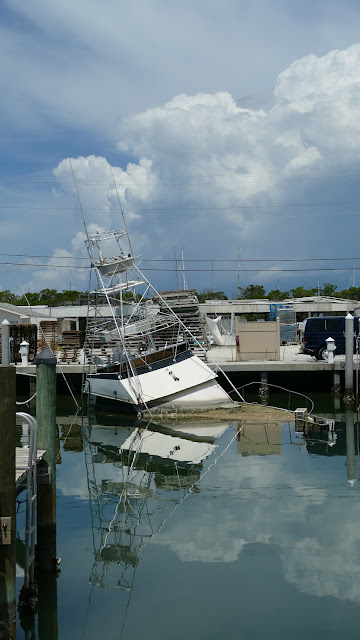 Looking west out of the main entrance to Boot Key Harbor there are channel markers leading to open waters with a bunch of people  fishing: 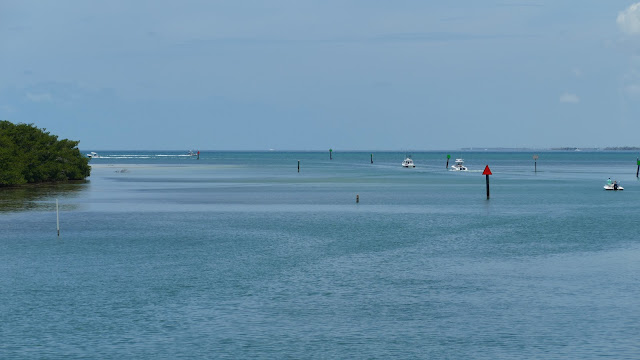 I spotted a station wagon for some person living on a boat. I would go mad if I had to shuttle back an forth in something this disorganized but it has character or something 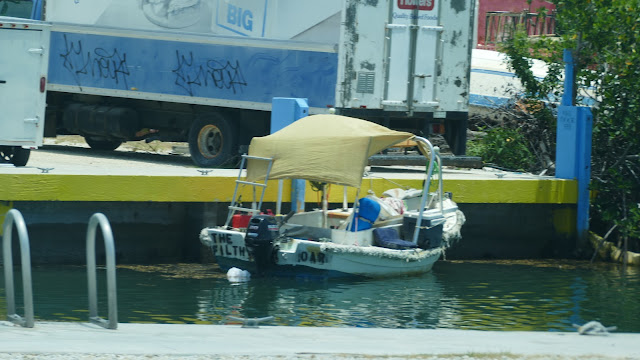 I forgot: this is the sign at the entrance to Burdines.  That's full of character, or falling apart: 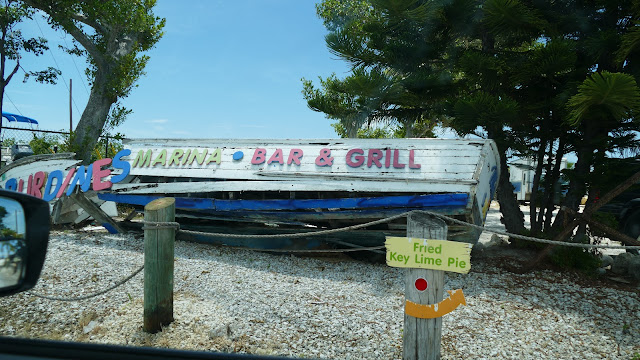 And so when you pull out of 15th street onto US1  you are  full of burger and if you are feeling superhuman, maybe you are extra stuffed with a roll of fried Key Lime Pie (which we did not have this trip though I have tried it previously whence this picture): 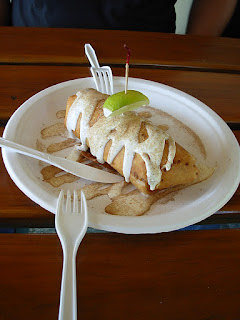 And as I was saying before I so rudely interrupted myself with talk of fried Key Lime Pie you turn south on the Overseas Highway and take to the Seven Mile Bridge, and so home. 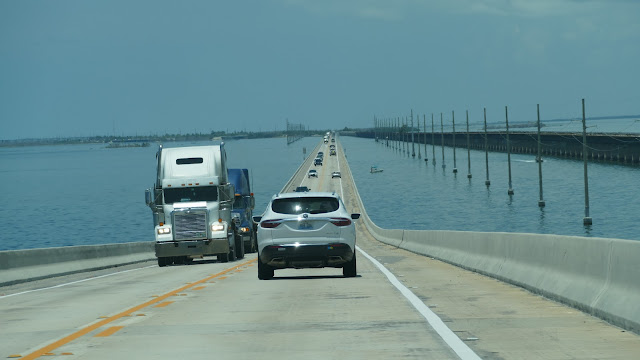 For Robert an afternoon of doing stuff of which he has lots  to do he says,while for me in my carb coma it meant sleep and cuddling my dog who was hovering in the air conditioning avoiding the blazing heat. 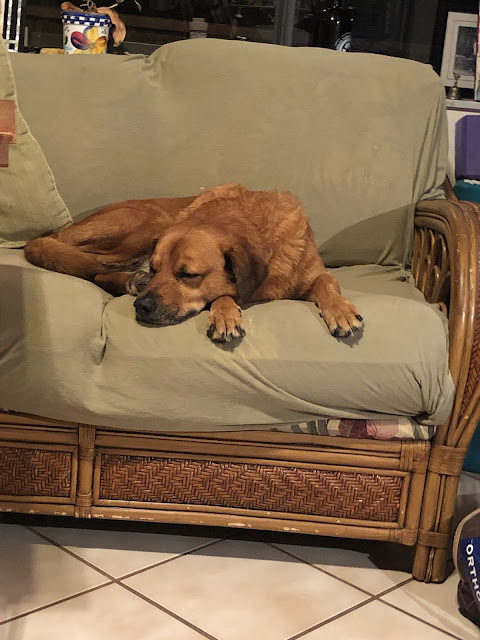