I guess I take mangroves for granted these days. I got a note from a friend Up North mentioning how little overseas travel she had done and never to the tropics so the Keys are as tropical as it gets. And that set me to thinking the sentiment is probably true for a great many people who visit the Keys. 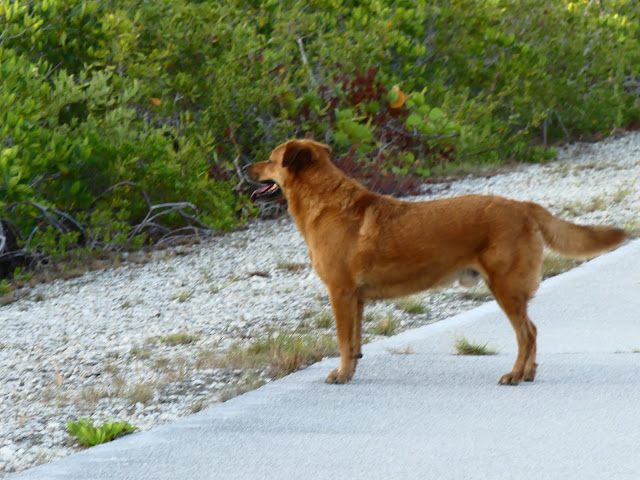 I was struck years ago by certain similarities when I rented a car in Georgetown on the Bahamian island of Great Exuma. My wife and I took a drive north checking out the coast road and the villages we had seen as we sailed south to the harbor. There really wasn't much there, a few houses a winding narrow strip of pavement, and tons of mangroves. Looks just like the Keys I thought to myself, and it did. Lots of scrubby green bushes all across Great Exuma. It's wood that's not good for much, too green to burn too twisted to use  to build and to awkward to walk amongst. 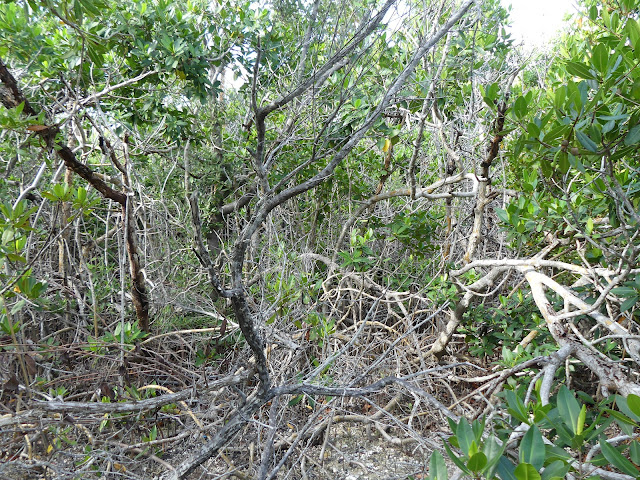 Some parts of the Keys more closely resemble  what one might think of as classic tropical forests of red mangroves typically found at the waters edge in Central America and the Caribbean. Where the Bahamas might be rocky and dry stands of red mangroves like this I have seen in Belize, Puerto Rico and Mexico. Talk about impenetrable: 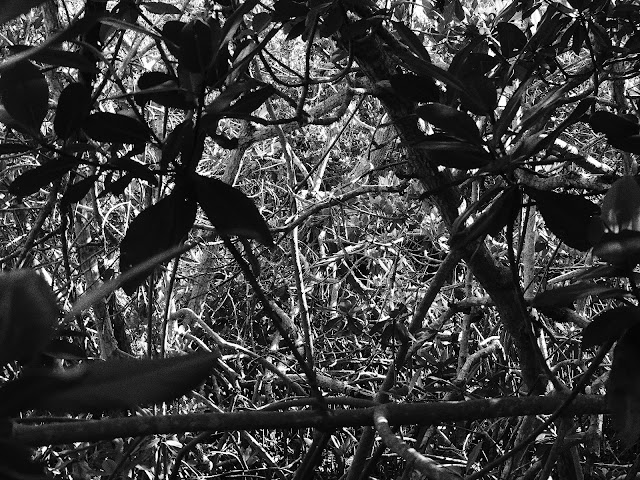 There is a path on Sugarloaf through these stands of mangroves and buttonwoods and Rusty and I were enjoying the breeze while I played with the camera and he played with his nostrils. These strong  east winds lately have made the great outdoors more great than usual  as the cooling breezes keep the humidity and mosquitoes at bay. 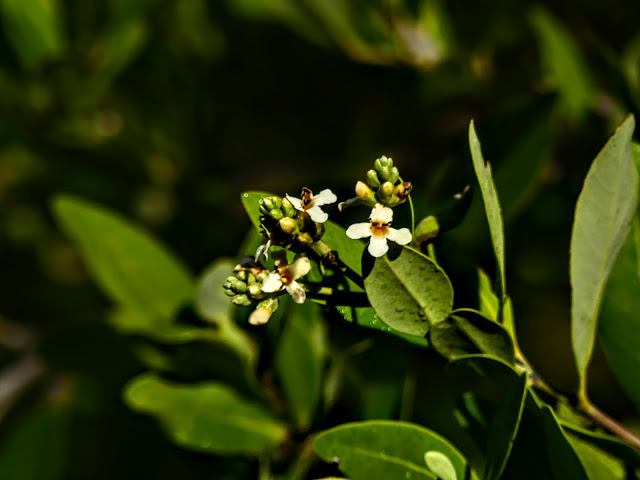 Which is not to say it isn't hot because by noon it''s ninety  degrees no matter how much the breeze is blowing. As I stood on the trail in the shade an overheated couple came sauntering down the path toward me. It turned out they were looking for the Sugarloaf Jumping Bridge which I was nowhere near. Lucky they met me on the path because they could have walked for an hour and a half in the wrong direction had they been so inclined. I doubt they would have but it is four long hot miles to the end of this trail which Rusty and I last walked July last year, two months before the Catastrophe. We were both pretty hot by the time we reached the trailhead which ends bizarrely in a bunch of bushes at the water's edge, like this: 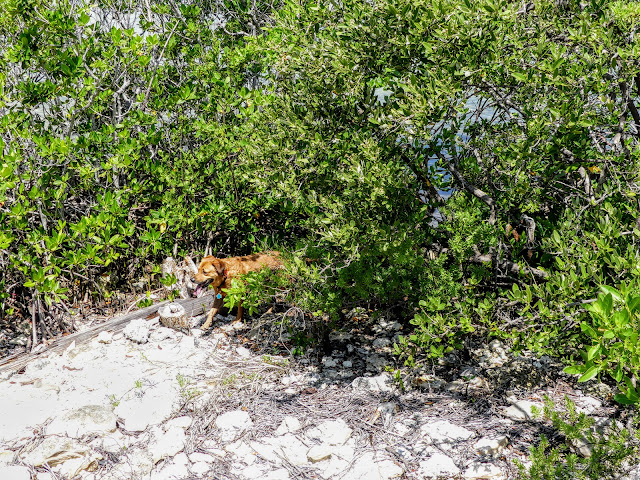 This time around we walked a short distance further after the nice couple from Texas turned back to drive to the Jumping Bridge area and left us to our own devices. 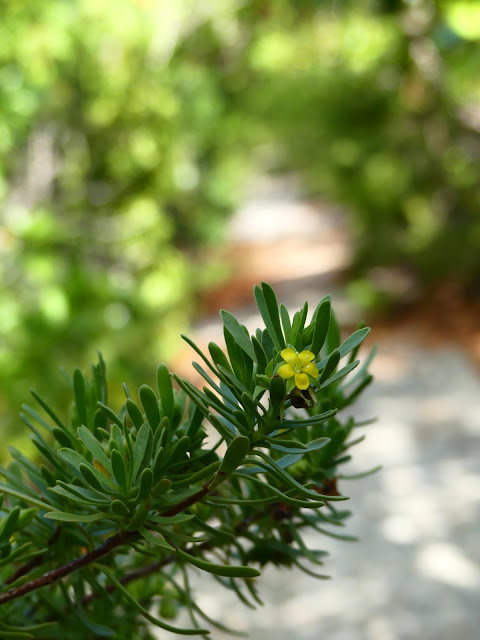 My device was my camera while Rusty trotted back and forth sniffing something. 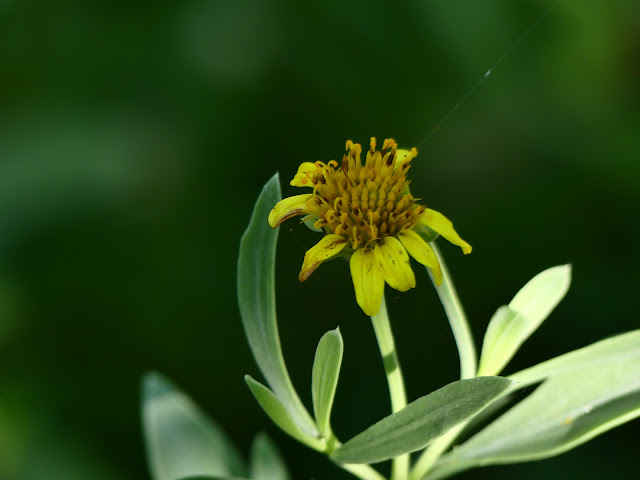 So how do red mangroves grow? They spread two ways and one is by dropping seed pods called propagules like this: 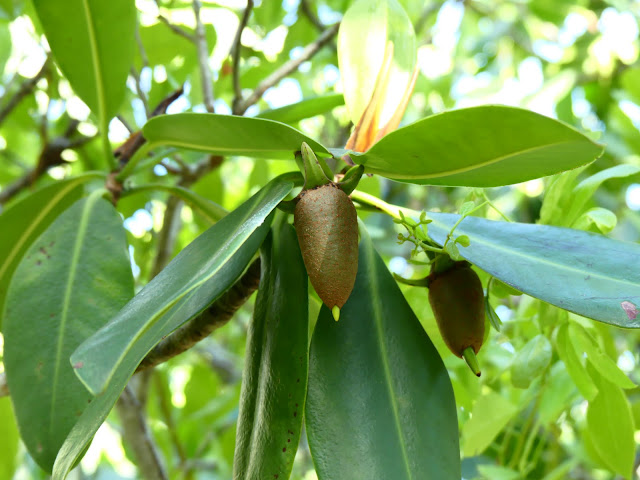 The red mangroves are the mangroves that grow closest to saltwater, indeed they will put roots down right into tidal waters because the plants have learned to separate salt from seawater. It's pretty amazing actually. They push the salt into selected leaves which turn yellow and drop off year round, while the rest of the mangrove flourishes on the salt water purified of salt by the leaf's sacrifice. 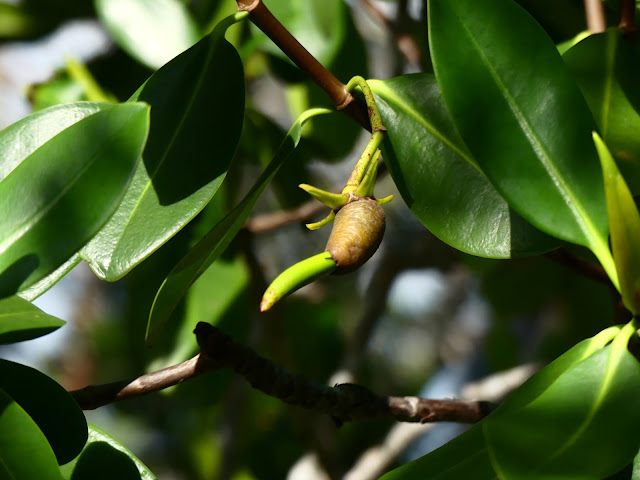 Then they grow huge seed pods which they scatter around themselves in the wind. If they fall into water they float pointing straight down and eventually sink into the bottom and put down roots underwater. 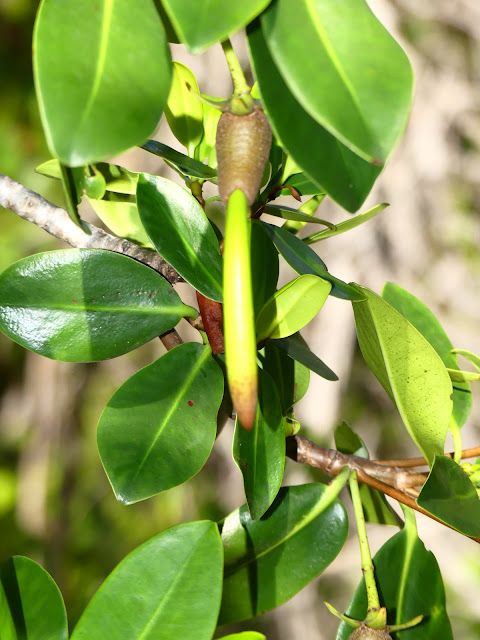 The other way red mangroves propagate is by simply spreading their roots which look like long brown tubes which become  a shiny maroon red color when wet. Hence the name red mangrove. the roots spread from the main plant and reach to the ground and dig in, to dirt mud or even rock.They are unstoppable. 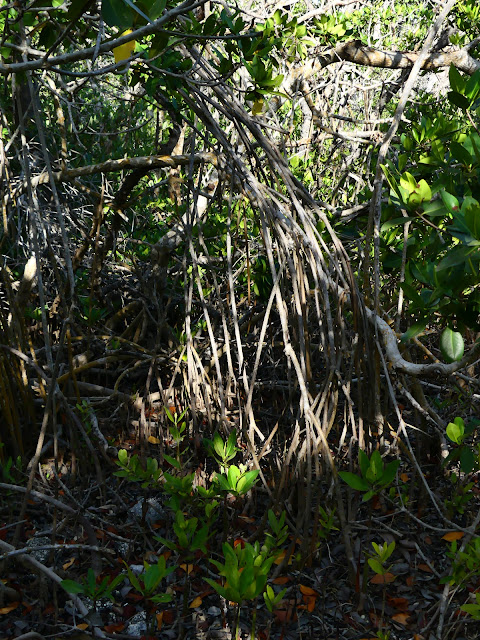 These falling roots  create a positive web of rubbery entanglements making it impossible to walk through these forests. A shoreline covered in red mangroves is a tough place to walk. 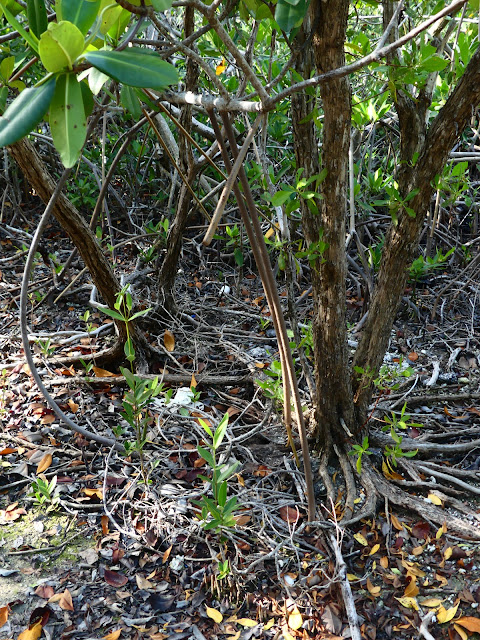 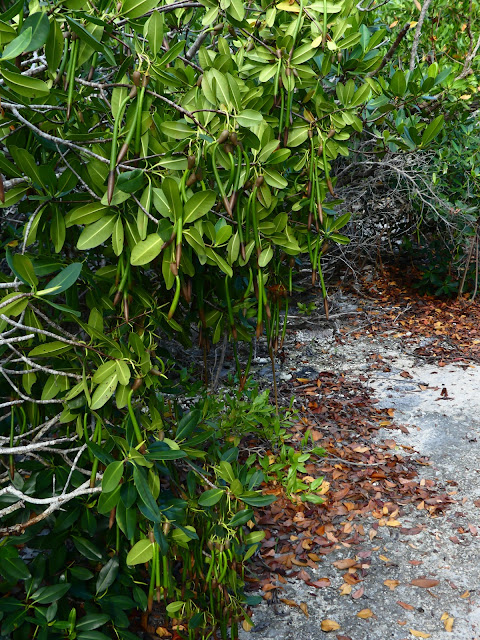 If I stop to think about it this is a pretty weird place to be walking. There are no hills, no views, no rivers no lakes...indeed there aren't many topographical features at all unless you count roads and shorelines. And yet these strangely twisted year round trees and bushes, twisted by nature shredded by hurricanes just keep on keeping on. 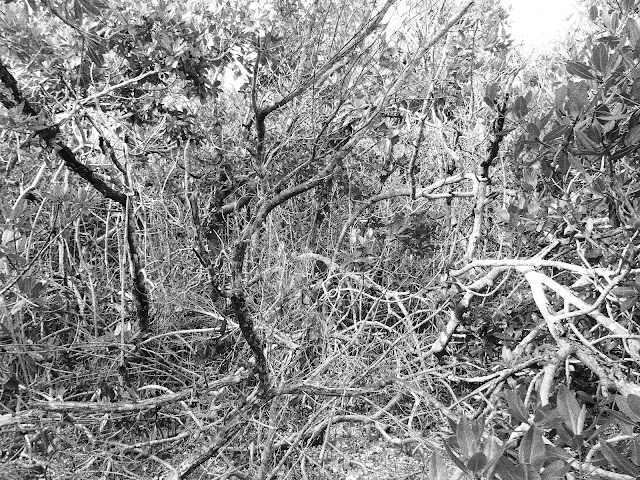 So does my dog who likes to sit at the top of the stairs and monitor the neighborhood after he's had his walk. This is how he watches me leave when I go into town without him. He doesn't need to work out at the gym; I do. 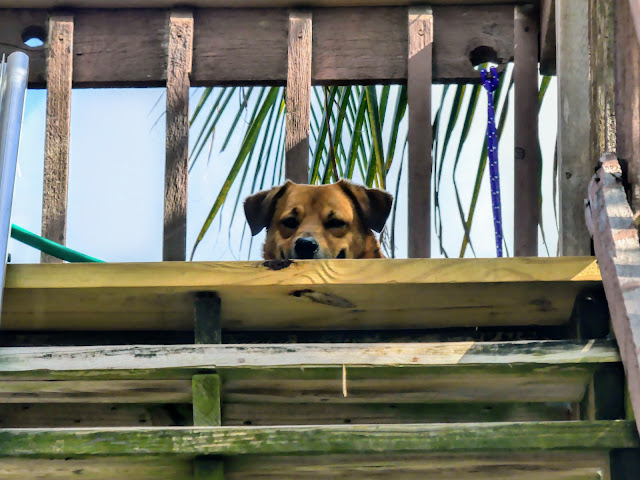