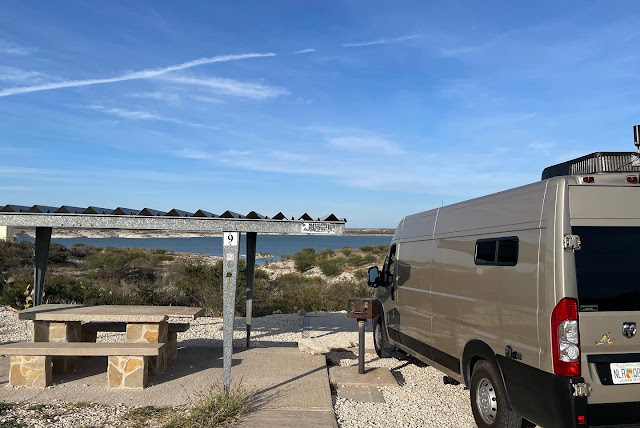 Lake Amistad lies about twenty minutes by Promaster camper van east of Del Rio, bisected by Highway 90 which heads west into the wilds north of the Rio Grande. It is a national recreational area and campsites are offered by private operators as well as public campsites like ours. 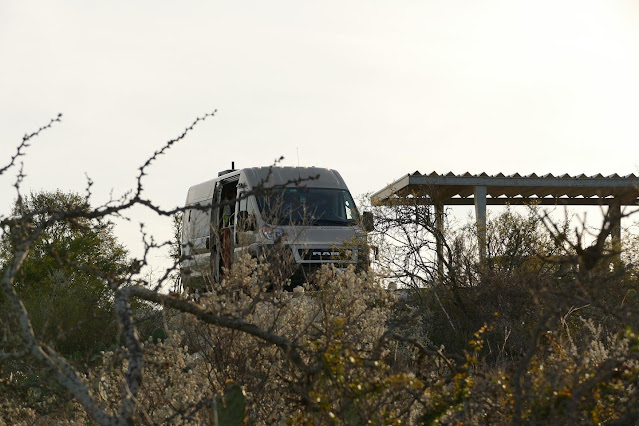 The fleshpots of Del Rio lie twenty minutes away down Highway 90 so despite the apparent wilderness and lack of amenity the place is quite easy to stay in the full 14 days even for people who like to eat out and shop. 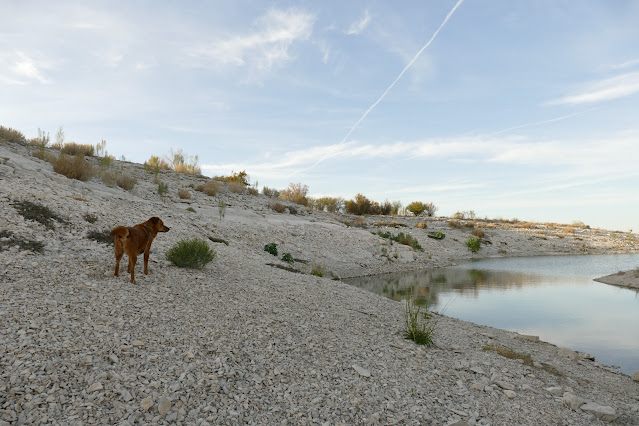 Of amenity at the Governor's Campground where we stayed there was not much but entirely adequate for our modest needs. Strategically spaced pit toilets of superior cleanliness, trash cans diligently emptied by National parks Staff and a couple of water faucets. We could have attached our own hose and filled our 35 gallon tank had we not done so already at Walmart. These considerations make or break life for people on the road. 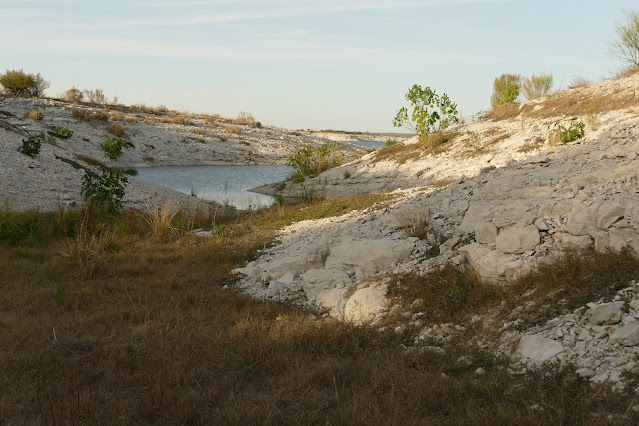 The lake was a joint venture by Mexico and the US nd planned during World War Two, not as a military project but simply as a way to provide electricity in the post war world. In talking about it with some thoughtful neighbors we met, we marveled at how the other side of life, the normal boring day to day planning continues even as the rest of the world blows up. The Battle of Britain half a word away didn't stop engineers thinking about hydro electricity in Southwest Texas. 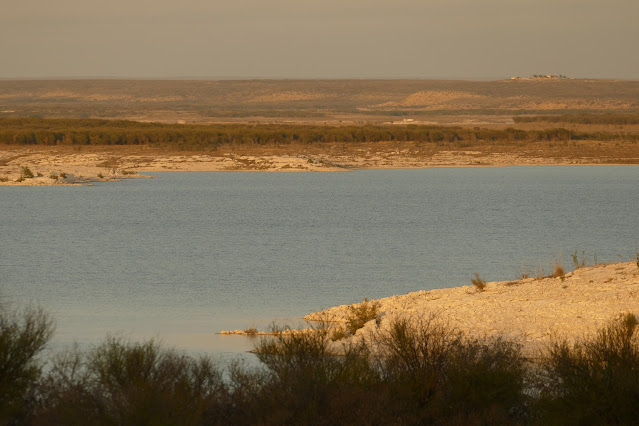 Those same neighbors mentioned they were here during the Great Freeze of 2020 so while the rest of the state froze, power-free, the customers supplied by the Amistad ("friendship") dam on both sides of the border carried on as usual. This was our spot overlooking the lake and quite private it was too. 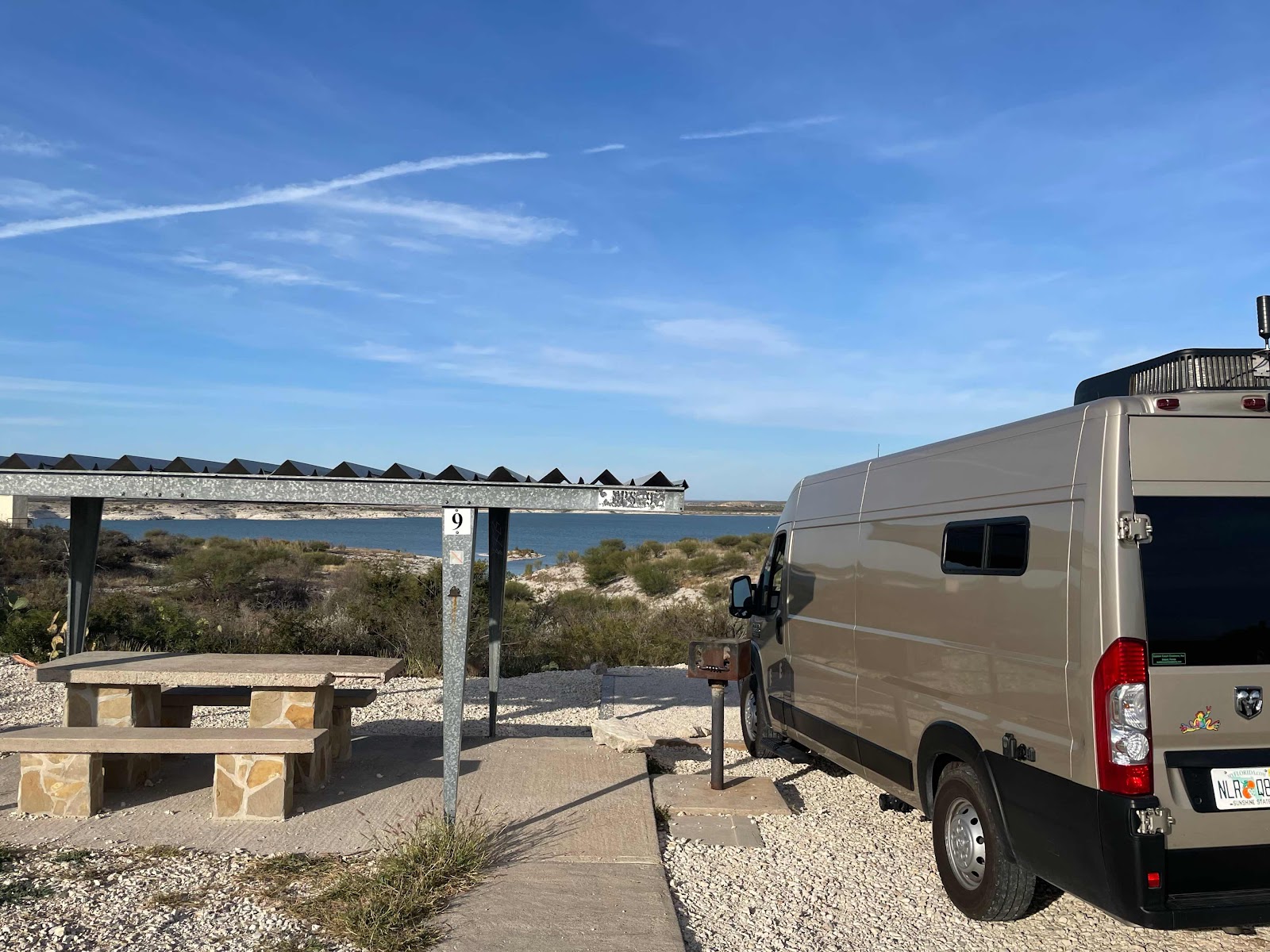 There are tent sites and parking spaces and some pull through spaces for longer larger rigs but we were satisfied with the view here (!). The camp sites were incidentally quite private. These aren't campgrounds for loud partiers or intrusive neighbors as people off the grid are usually looking for a natural environment and peace and quiet. 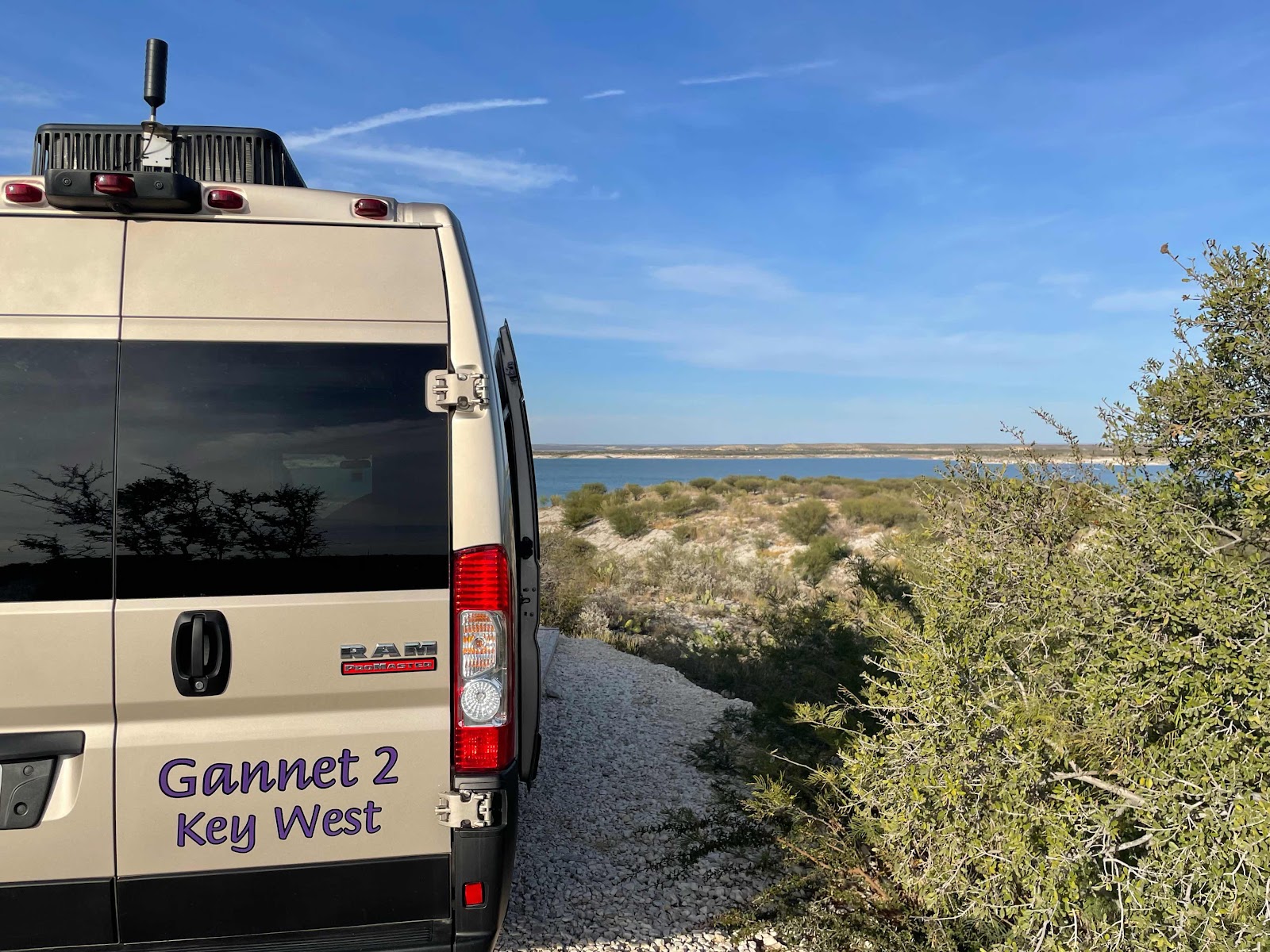 The fees are absurd. For young vital people with incomes and youth on their side the charge is ten dollars a day and you can stay up to 14 days. For rickety seniors and assorted impecunious old folk the charge is a mere $5 if you have the Senior Pass for National Parks. We have reserved a space at Cottonwood Campground in Big Bend with the same lack of amenity for a mere $8 a day. We are so lucky to have these places available to all of us. 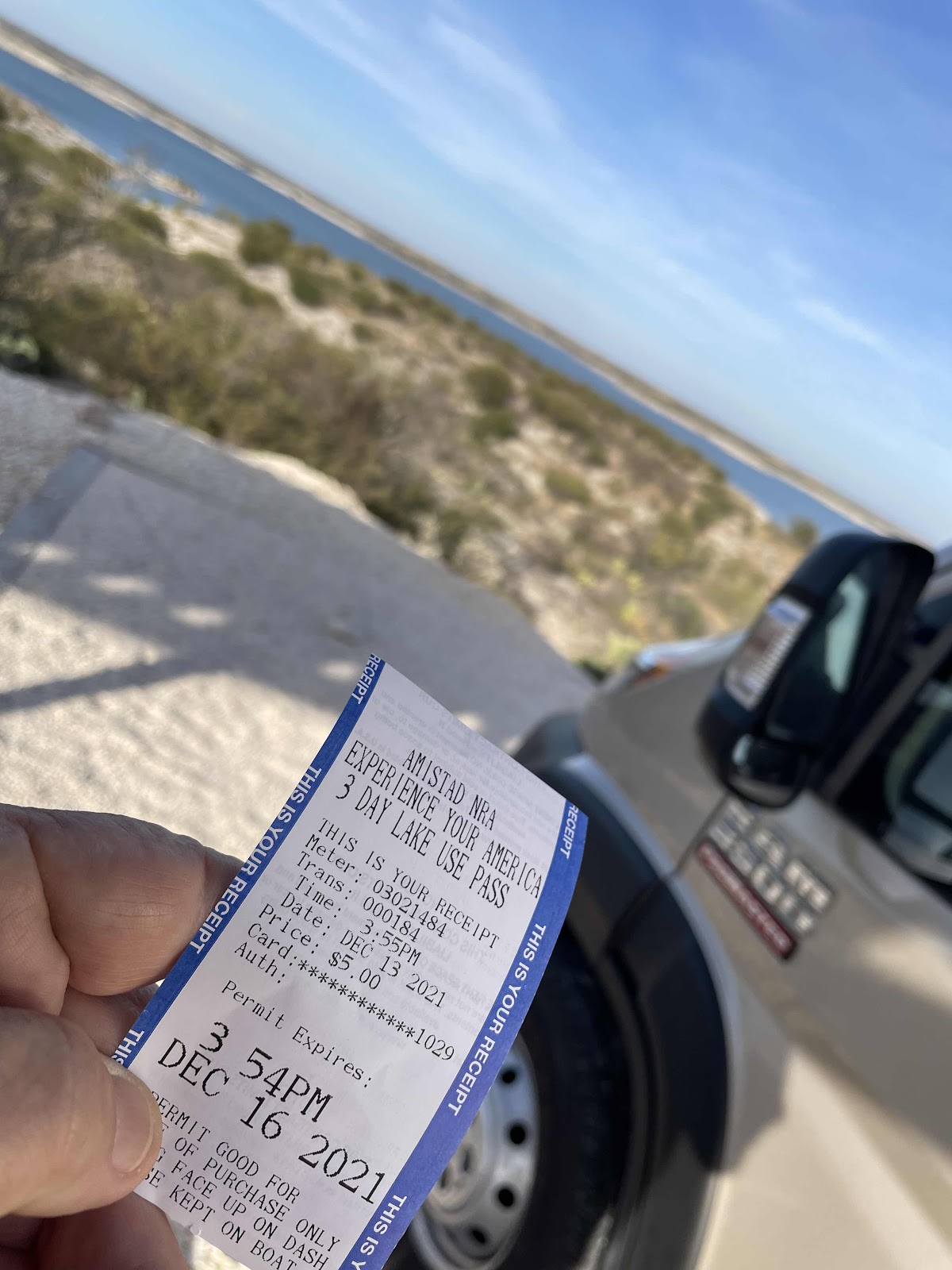 Layne looked around and said "I could stay here three days," but there again she has a cousin in Tucson who is expecting us...There is traffic noise I might add and the picturesque bridge on the left is a railroad track so there is that too. Our van is well enough insulated we don't hear much noise and rumbling traffic never bothers us for some reason. We also have an unnatural tolerance for not being perfectly level in the van. No idea why we are so blessed. 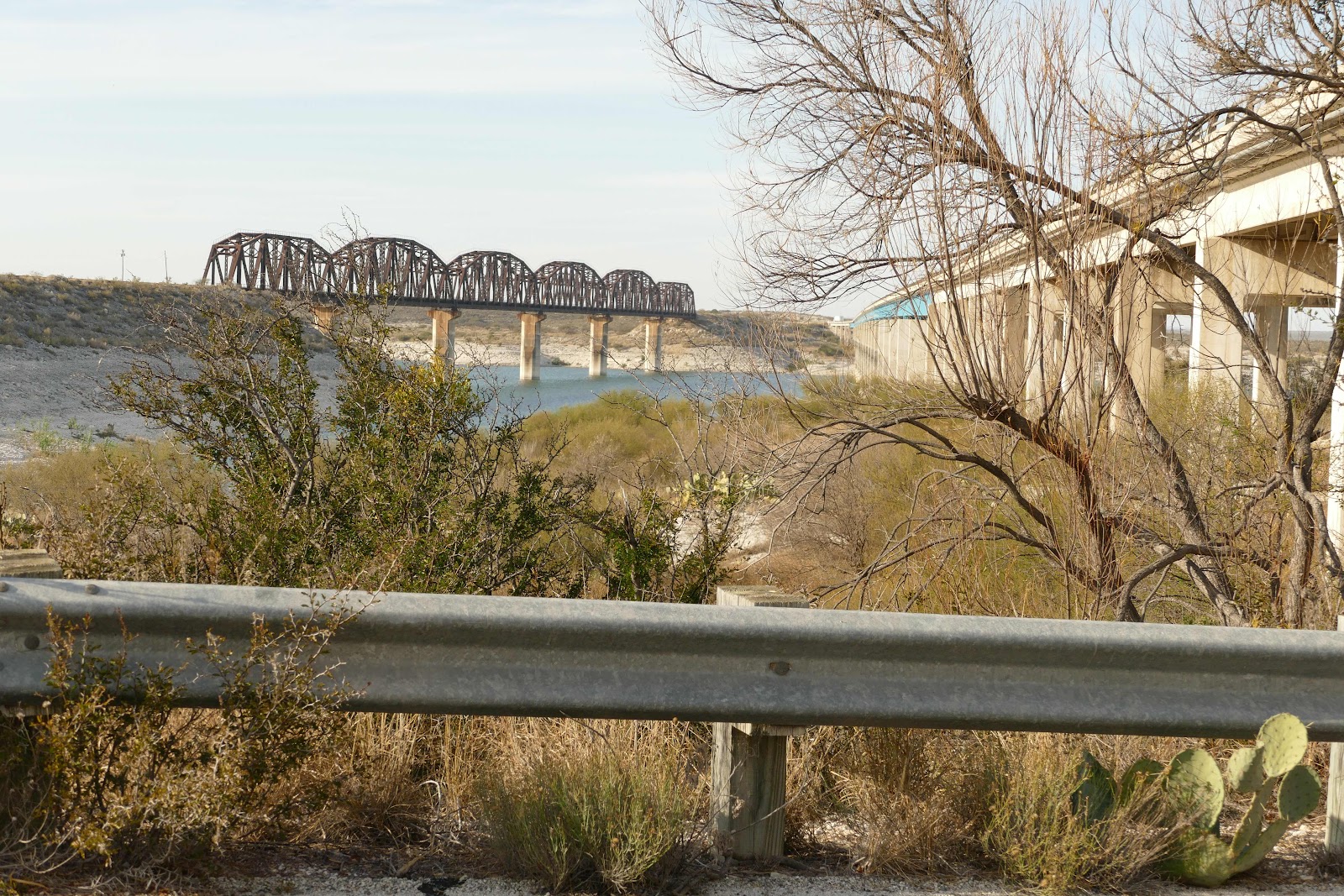 Peering through the sage and thorn bushes one might discern a neighbor! 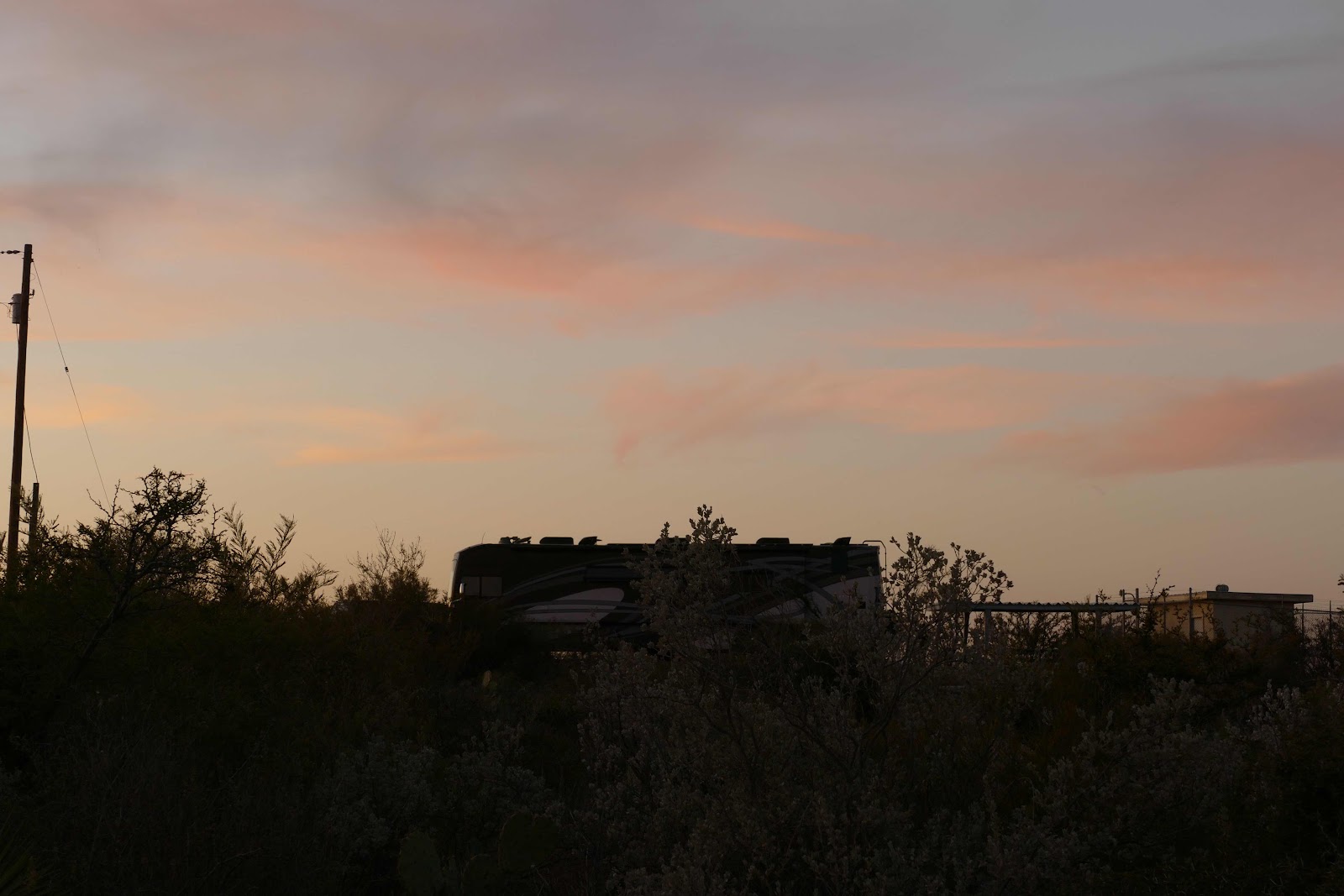 So the day starts with me rolling our of our very comfortable bed and dressing myself and Rusty to face the world. It always starts with a walk and as the day was gray and overcast I figured we should roam further afield and see what the surroundings offered. We set off down the road. Deb from Ohio was walking with Ned on their morning romp and soon caught up to my ambling dog who was sniffing fit to inhale half west Texas. New smells for my Rusty. 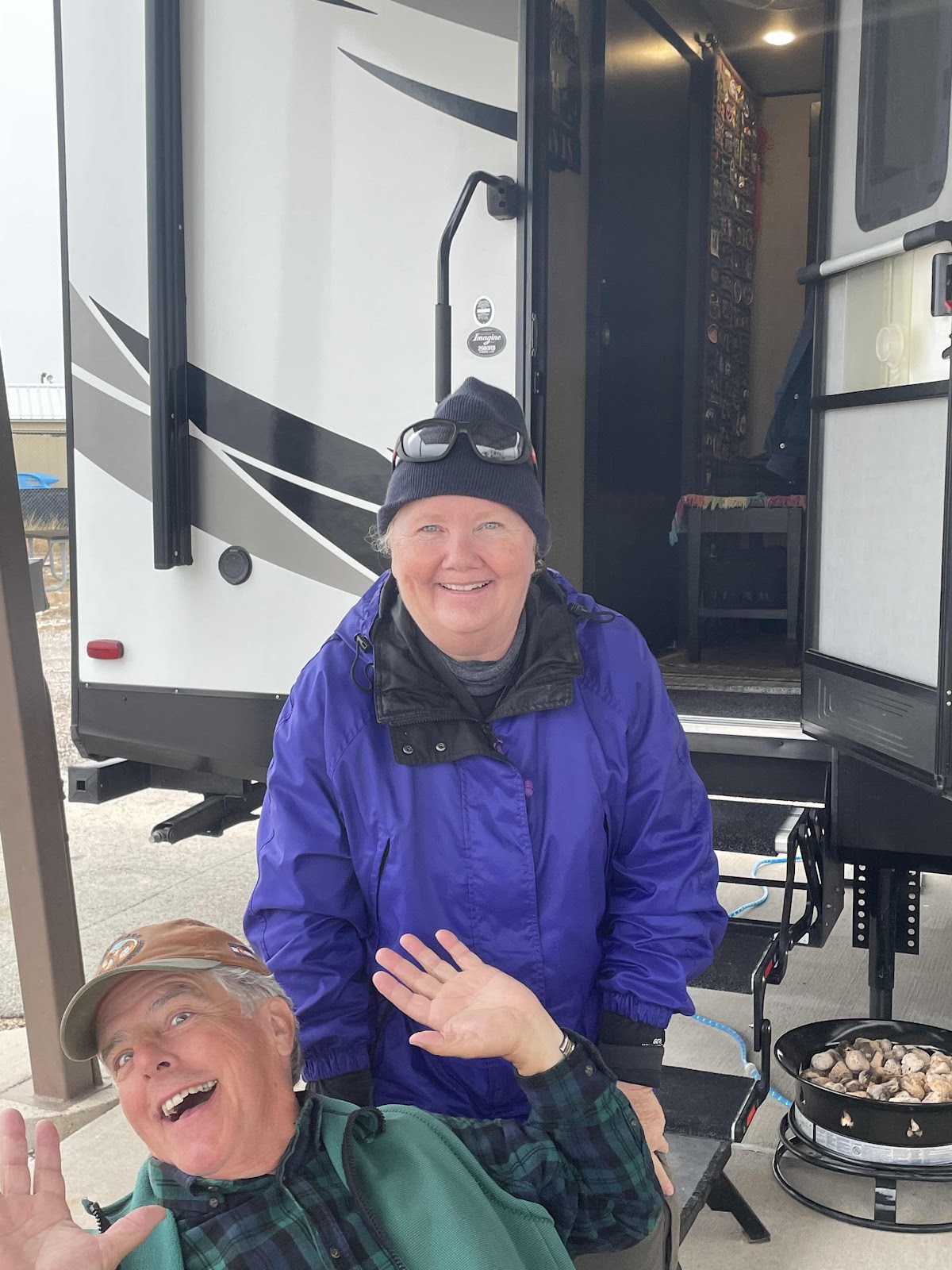 They have been on the road for four years in their trailer interspersed with foreign travels in Latin America and Europe. We fell to walking together on the road, Ned marveling at the Rusty's voice obedience which I explained had taken some not inconsiderable effort walking the back roads fo the Keys...I marveled at Ned's sidearm carried Texas style on his hip. Apparently they like to walk at night and had heard some interesting wildlife including a local version of a panther or mountain lion known as an ocelot. I would point my camera at it but Ned, retired military man had previously received different and perhaps more useful training apparently. 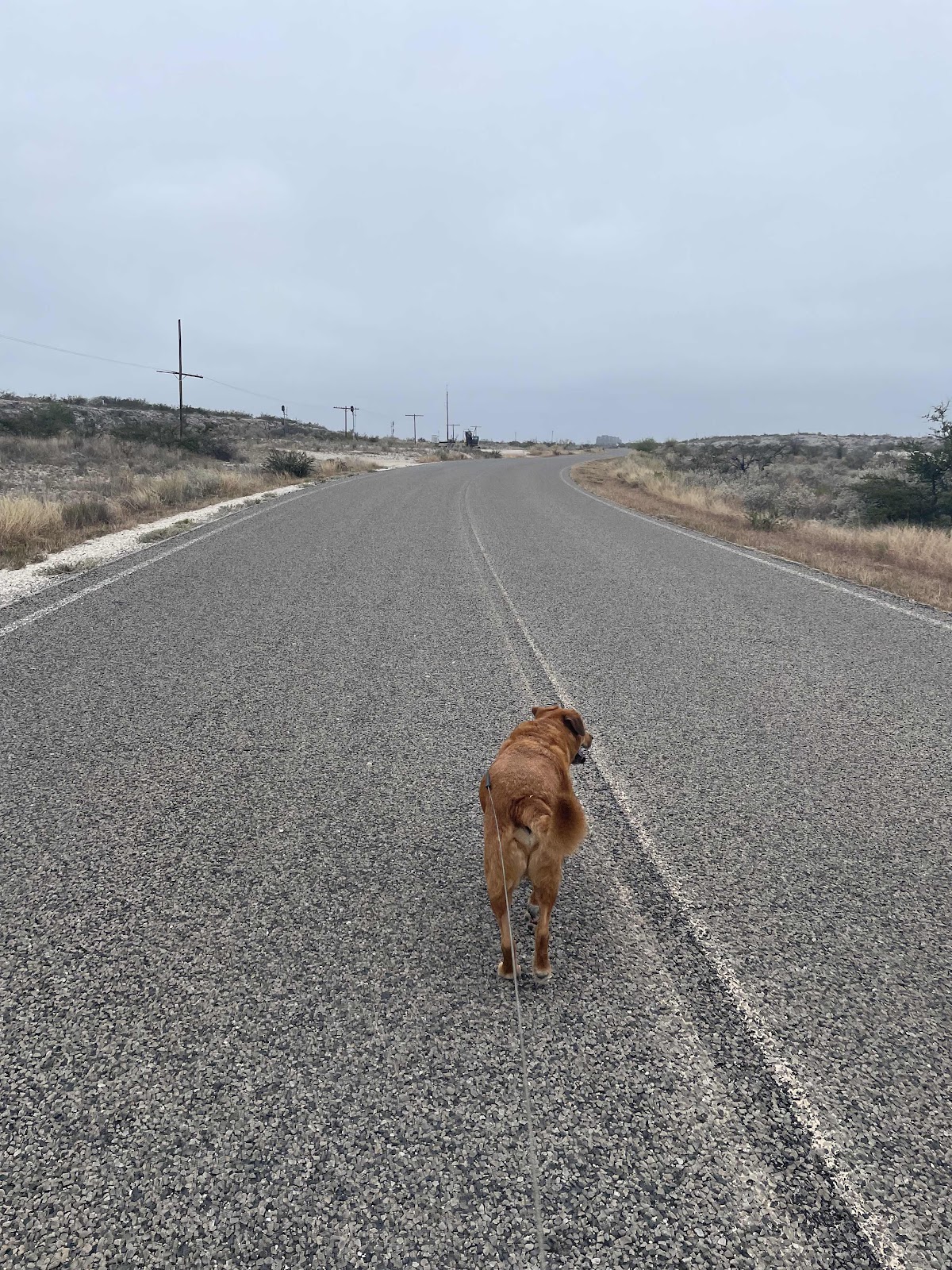 They were staying at the military campground a mile or so away from Governor's Landing, similar I suppose to Sigsbee in Key West where retired military can stay at a reasonable price in an unreasonable town. Had I grown up in the US I would have considered the military an excellent way to get an education but as a retiree I had never considered the camping perks! I got coffee and cookies and we talked and laughed for an unconscionable long time as they had excellent stories to tell. They re waiting for Covid to let up just as we are for international travel to resume. They re having fun doing the waiting. 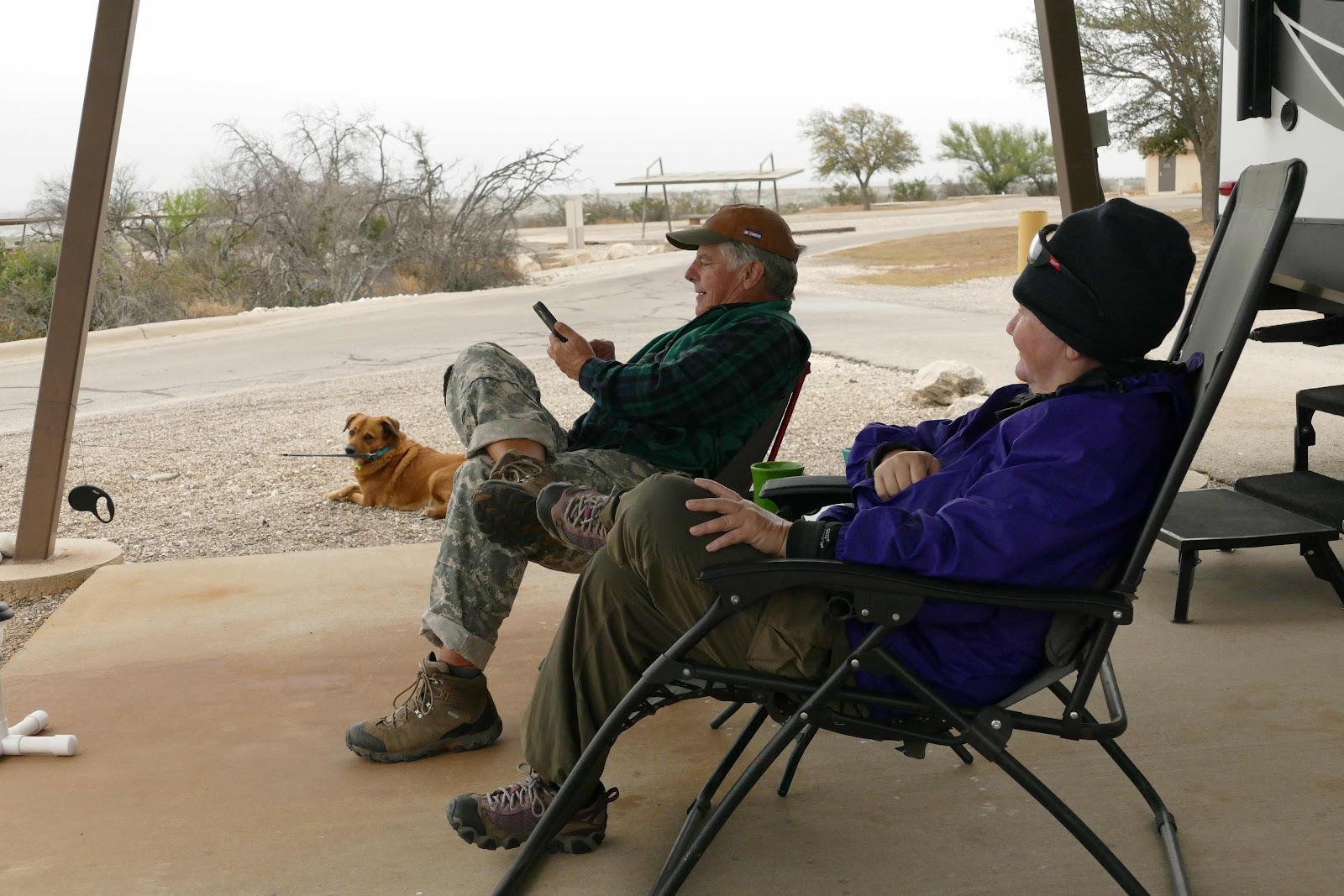 Rusty got his water so full of mental and physical refreshment we both ambled off back down the road. I hadn't heard from Herself on the phone so I assumed she was still asleep. I sent her the picture above noting we had been adopted and never heard back so I figured we had time to dawdle. 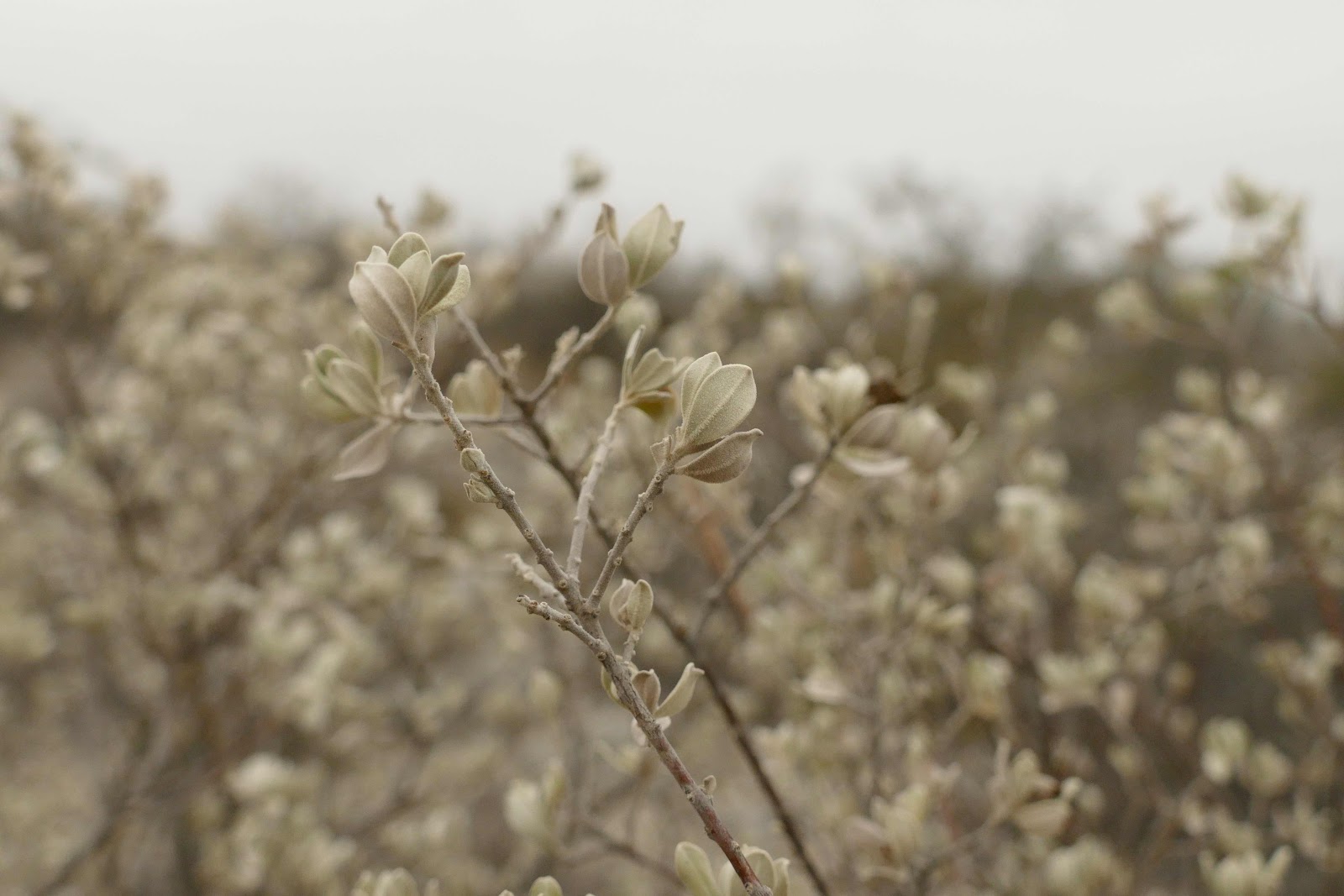 In the picture above you see sage which is all over the place and to my nostrils doesn't smell anything like as strong as the stuff one eats but I am not a botanist. Ned told me the leaf turns purple after the rains and does it quite spectacularly so at last I know why Western literature goes on so much about the mythical "purple sage." The stuff you learn while in a van. 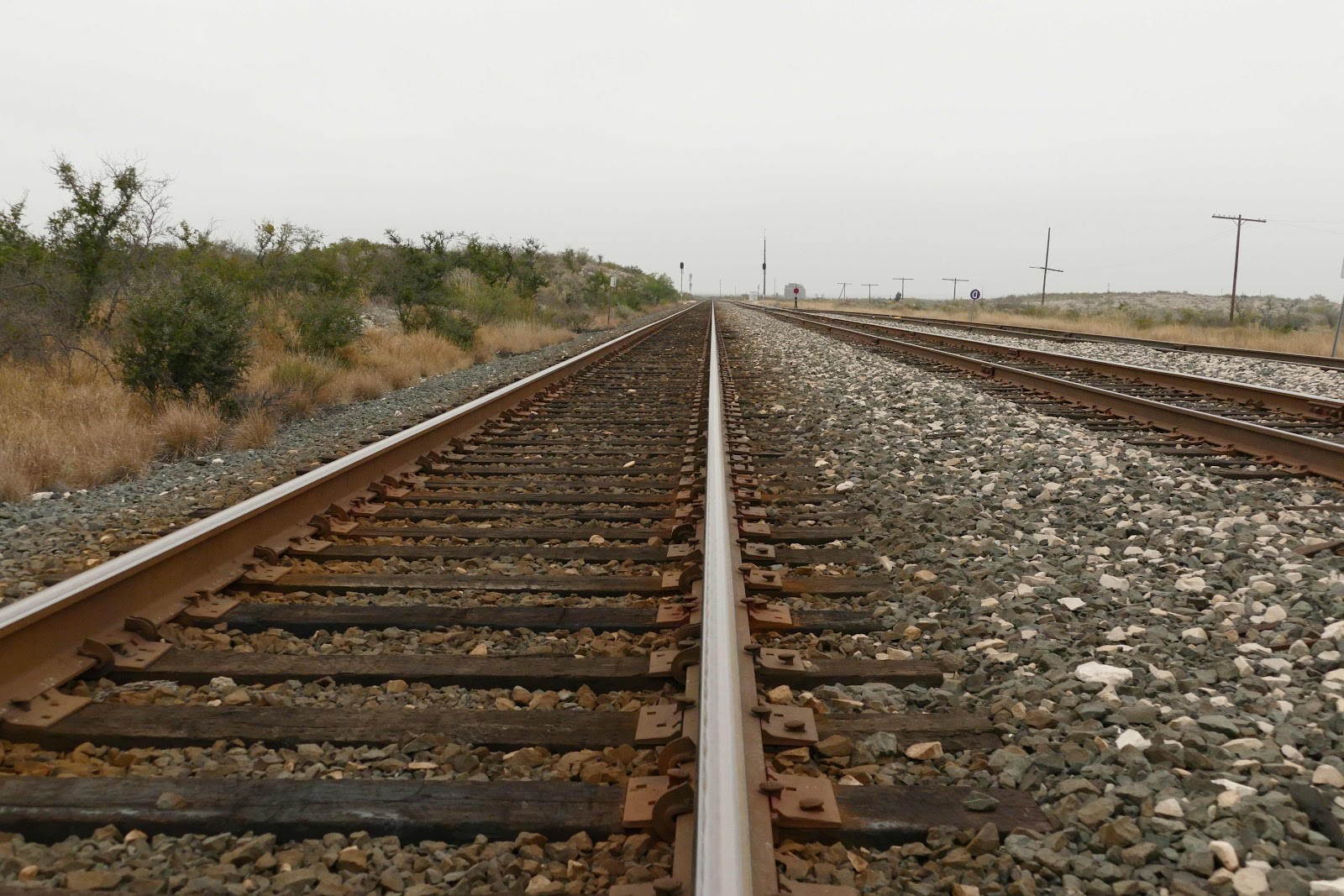 I like trains and I used to miss the tracks and the sound of the train horn in the train-free Keys so I never pass up an opportunity to photograph those leading lines. There was a pick up truck that had a horn that made a sound like a train horn and people used to get as mad as wet hens when he sounded it driving around Key West. I never said a word for fear of being lynched but I rather liked it. 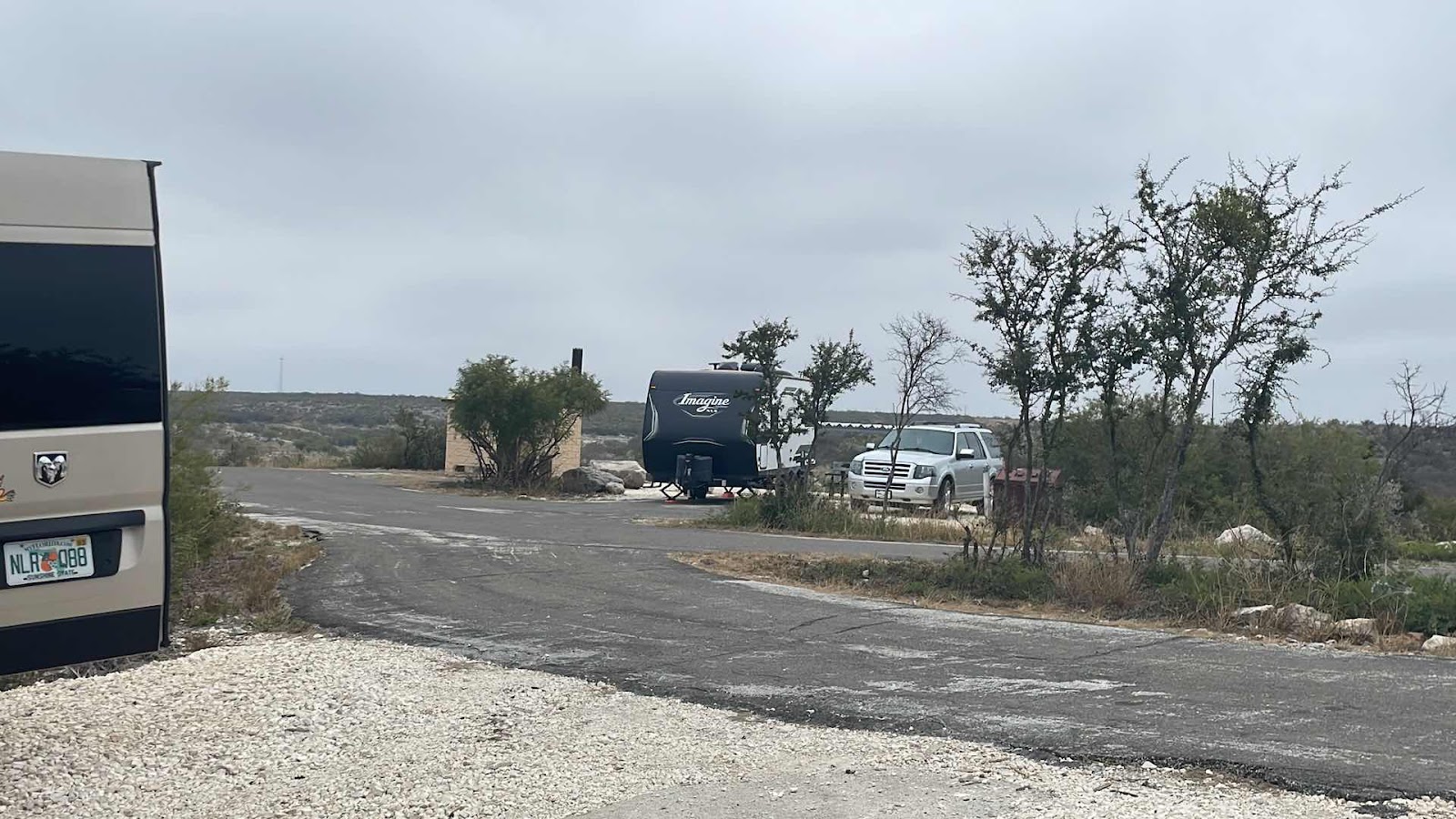 The couple driving the SUV and trailer above, Alicia and Mark backed onto their spot after us and were extremely polite in asking if we minded them pulling forward into our space to line the rig up to go backwards. Oddly enough Mark grew up not very far at all from where I was born in England and lives in Canada. Alicia got the trailer ten short days before becoming our overnight neighbors and made backing up in the dark look simple. No trees shrubs or outhouses were harmed in the operation. 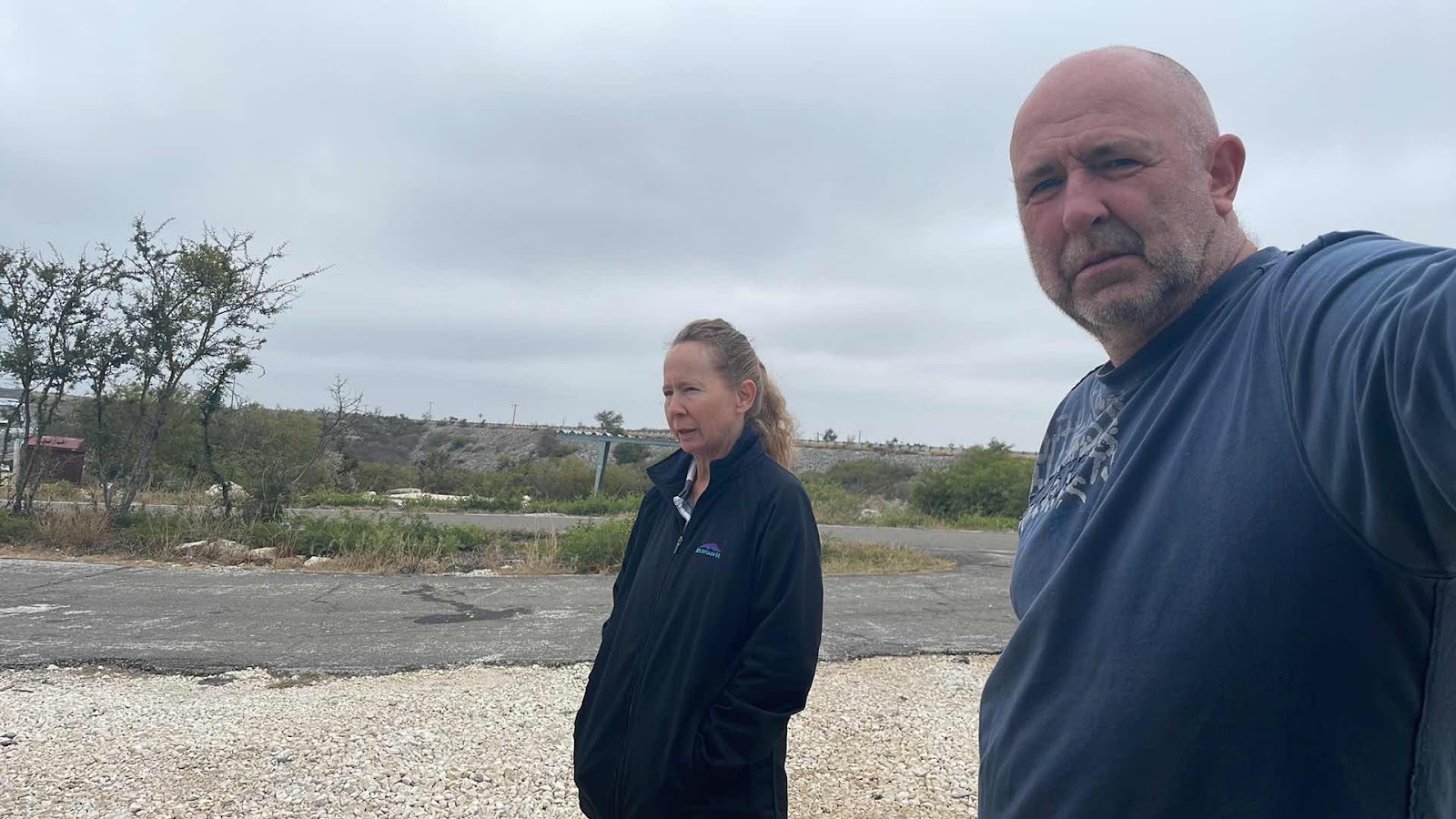 That ended up being another long evening fo chatting of this and that and it turns out they want to visit the Keys so were curious about what we had to say. Price as always is prohibitive and with a trailer it would be so much harder to be unobtrusive. Then again how do they park the trailer and use the car around town for the day? Laye called around to see if anyone had a space but so far no luck. Some days Gannet 2 seems rather narrow but other days the versatility of fitting into a car space, the unobtrusive nature of a delivery van help justify the vast expense and limited living space of a custom converted Promaster. 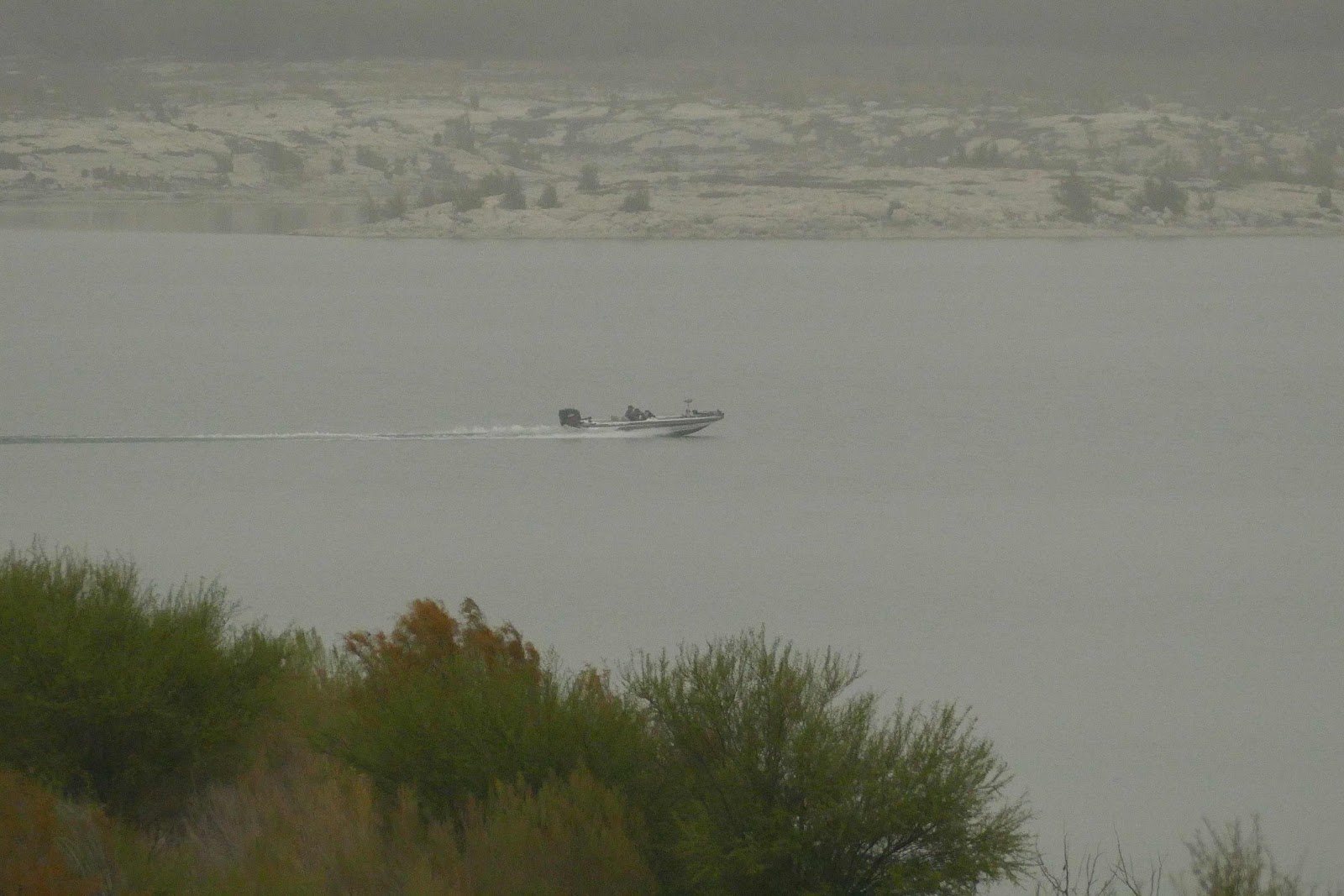 For the rest Lake Amistad was a break for us from driving and seeing and doing. Layne got out her watercolors and Rusty dragged me round the lake through thorns and over crumbing granite shale. 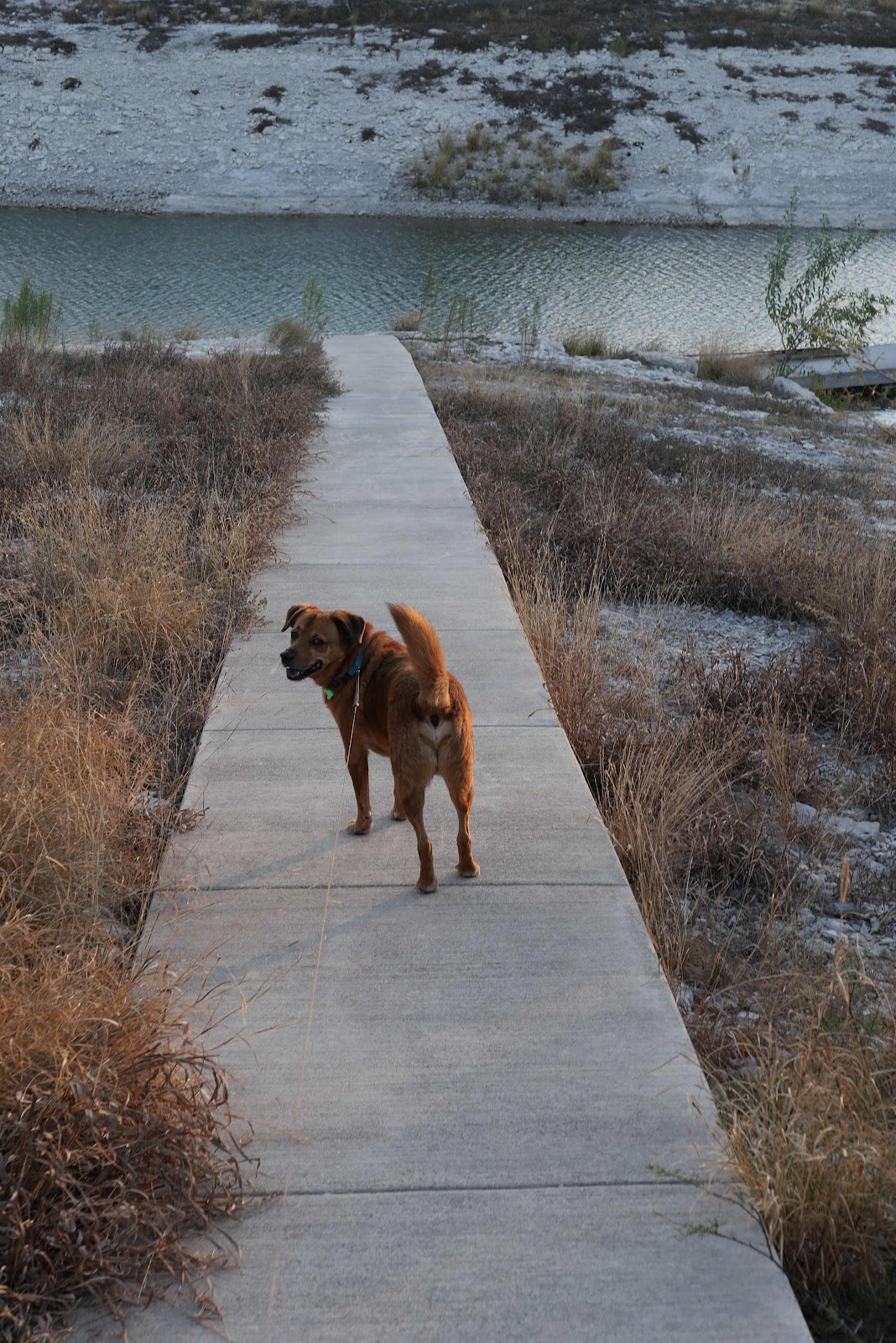 That I didn't twist and ankle or topple over must be attributable to the daily round of YouTube exercising we indulge in. I wondered what the surgeon who put my pelvis back together would have thought of me acting like an impetuous youth. 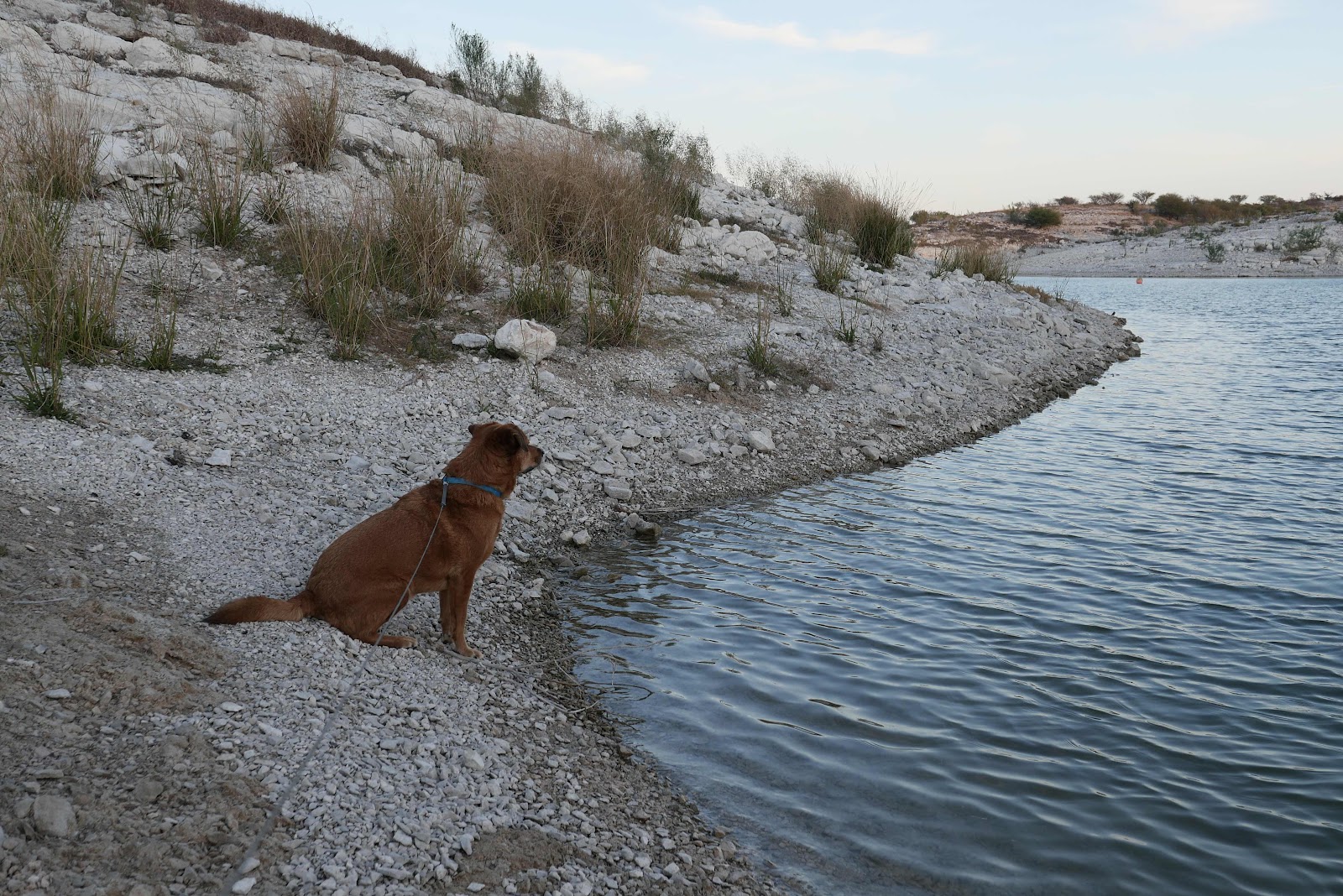 Between the long morning walk and the afternoon lakeside scramble Rusty couldn't keep his eyes open but he did not want to go indoors so the inside came out to him. He passed out. 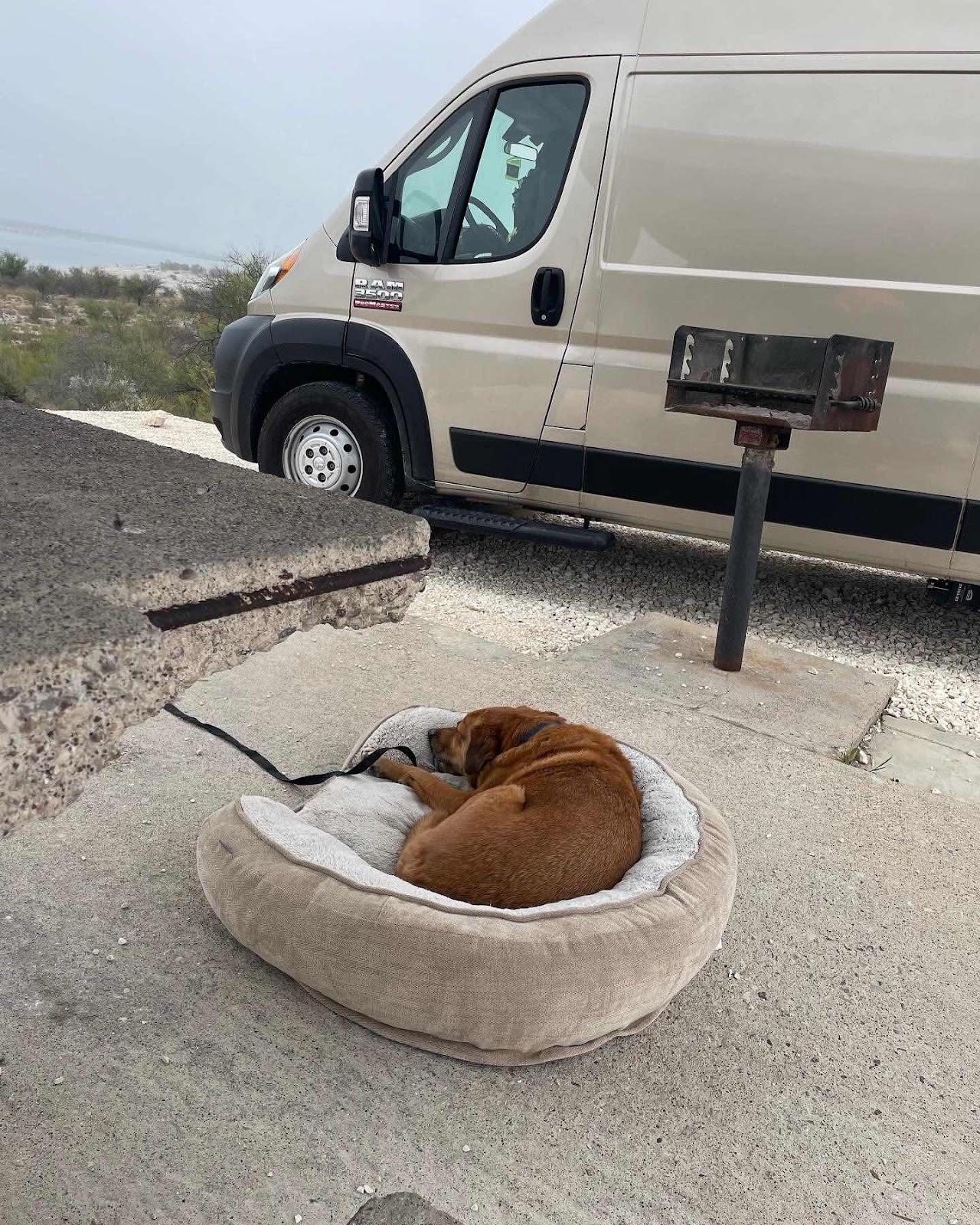 We got back on the road after. round of good byes and found ourselves inevitably on US Highway 90 zipping west at a sedate 60 miles per hour to save gas which costs upwards of $3:50 in the small towns along the way. We also came across our first and doubtless not last Border patrol inspection station. Two young men in green uniforms and fulsome beards of a vast proportion not approved by the Key West Chief of Police (!) were shivering in front of a gas heater. There was one question while a drug dog sniffed the rear of our gun/drug/immigrant-free van. He asked if it was just the two of us in the van and Layne replied brightly there was Rusty as well. The beard didn't even twitch but he waved us on. 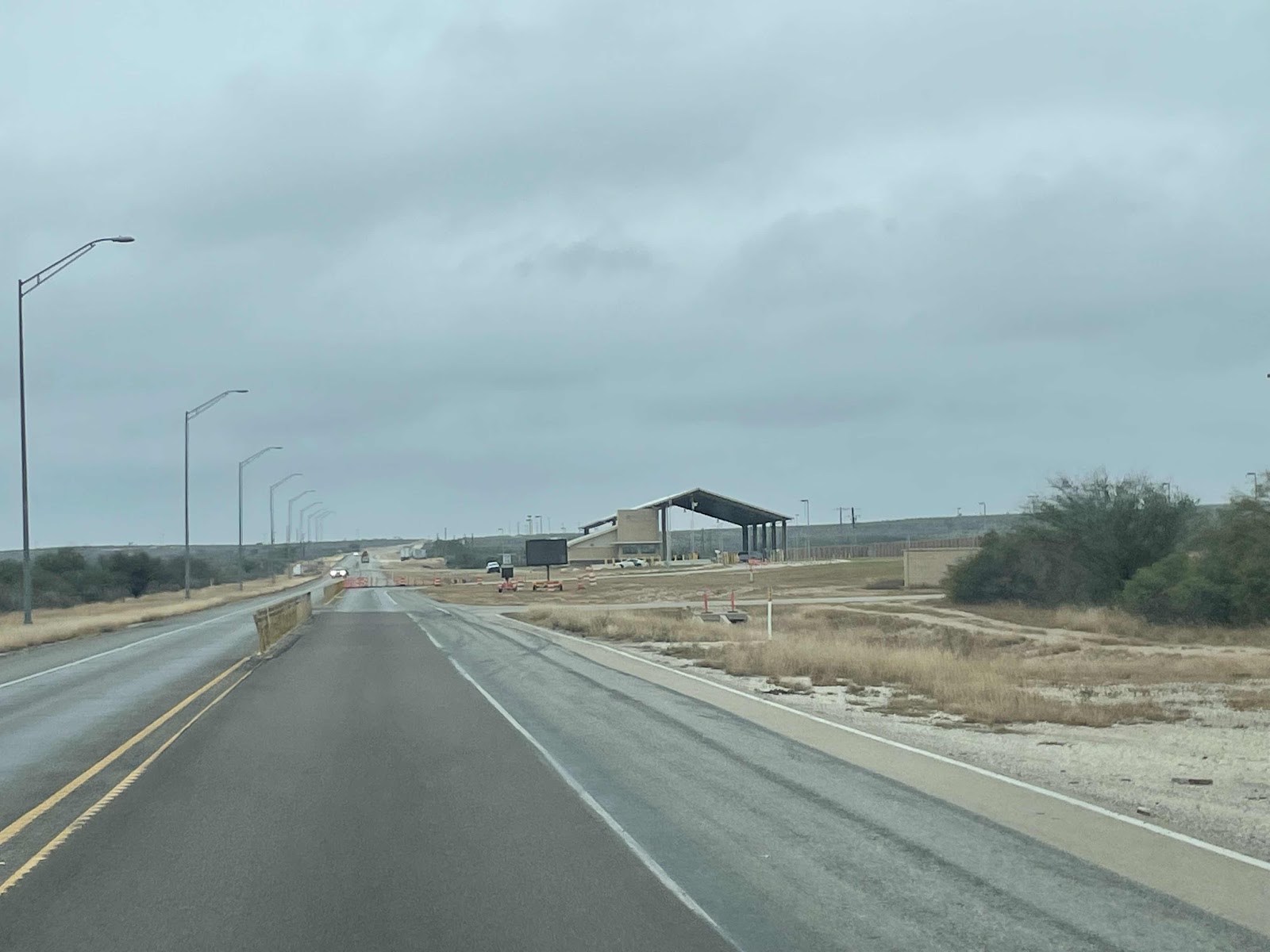 Later I distinguished myself at a construction zone by obediently following a cement mixer truck through a traffic control point into the left lane. When he switched back into the right lane I of course followed him until She Who Must Be Obeyed gently pointed out that he was part of the construction crew and we needed to get on back into the left lane and continue our journey to the state park. She kindly stopped making fun of me well before we arrived at the bizarrely named Seminole Canyon State Park. Florida Seminoles..? In Texas? This we had to see.
Posted by Conchscooter at 1:00 AM 4 comments: