I have often expressed the thought that were we to cut the Seven Mile Bridge life in Key West would slow down a lot and it would take some commitment to get to Key West for a vacation. Years ago the old bridge blew up in a propane accident killing the bridge tender as I wrote about it here: Key West Diary: The Ninth Wonder. I had left by then but my last boss recalled the difficulties of supplies being barged in and an airlift being fashioned as the new bridge was built and the old bridge got a temporary repair. It got old fast she said. 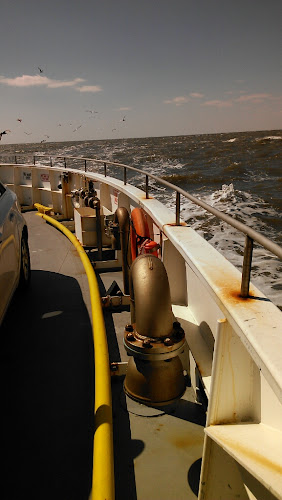 On Wednesday the wind was howling out of the north and as mentioned previously it was cold as we arrived at the Cedar Island ferry terminal for the ride to Ocracoke, the southernmost inhabited island in North Carolina's Outer Banks. The drive from Beaufort was an hour of long straight stretches with assorted natural beauty on either side of US 70. 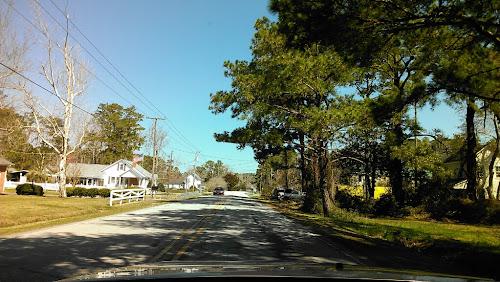 My friend Robert thinks I'm crazy for wanting to create a break in the Overseas Highway and his reason is succinct and easy to understand: Everything would cost more, he says. My wife told me I was crazy, especially considering she has to commute across the bridge to her teaching job in Marathon. I get no votes for thinking the Lower a Keys would be more slow paced and livable with a ferry. Maybe that's why I like Ocracoke so much. They don't care about demanding a bridge to Hatteras to make life easier. 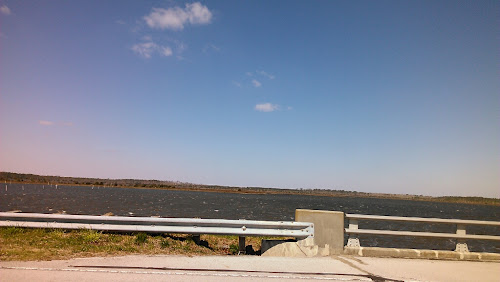 In many respects Ocracoke is less isolated than Key West. There are two ferries from the village at the southern end of the island and both take about two and a half hours give or take 15 minutes. The boat to the Hyde County seat of Swan Quarter is useful for islanders on jury duty or needing to get a new license from the DMV. The boat to Cedar Island takes about as long and lands you in the middle of nowhere. However the boat from the north tip of Ocracoke, thirteen miles from the village, is free to travelers and lands you in Hatteras after a 55 minute ride. From there the ride up the islands is only 60 miles which can be crowded in summer and from there the sybaritic pleasures of Washington DC itself is about four hours away. I'd trade Miami for DC any day as a nearby big city. 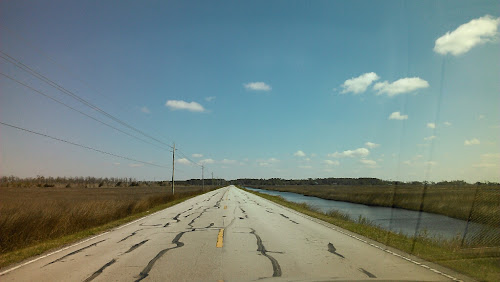 The road to the Cedar Island ferry winds through flat countryside with pine forests, swampy estuaries and tannic brown waters on either side of the roadway. You'd think this dead end road would be devoid of humans but as usual every speck of land has someone scratching a living from it. We passed churches and exhortations to repent, groceries and exhortations to buy, and houses with exhortations not to trespass. The ferry terminal seems a long time coming. But eventually it shows up, an abandoned motel, a vast spacious parking lot with traffic directed to lines either with reservations or without. Locals it should be noted get a windshield label that puts them at the front of the line, which seems fair as their taxes subsidize the state ferry service. We had reservations which were entirely unnecessary as there were but 13 cars on the ride over. 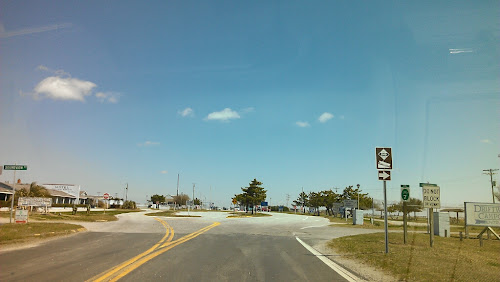 Fifteen bucks is a steal as the State of North Carolina treats it's ferries as extensions of the highway. They run year found but weather can cause delays so acting as though you are entitled to travel won't do you much good in this part of the world. Indeed we got a phone call advising us the ten o'clock boat was cancelled and would we like you reschedule? Apparently the Coastguard had scheduled a boat safety inspection and our preferred earlier run was off, with just 24 hours notice. I suppose I should have called 911 and treated this setback as a first world emergency but we chose instead to sleep in then dawdle along the way. 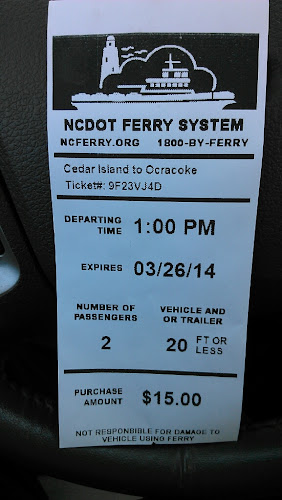 I had to show my driver's license then we parked in line at 12:30 as previously directed; then we waited. I walked Cheyenne a bit till the cold got to me, soon we repaired to the car to toast in the sun out of the wind. Richard asked if we took the Fiat but we use the Fusion as our touring car thanks to its broad back seat and easy access for Cheyenne with the Ford's massive trunk that easily fits bags and accessories and crap we buy along the way. Some day after Cheyenne has gone to her reward I want to drive the 500 to Alaska, for fun and because it's too bloody cold and wet to do it on a motorcycle. A Fiat convertible will work fine for me crossing the tundra in a hailstorm. This was too cold for my taste, 39 degrees: 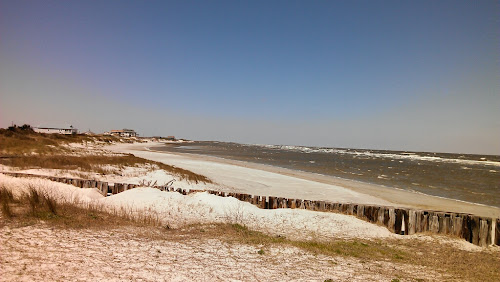 We stayed in the car for the crossing lulled to sleep by Cheyenne's deep wet rumbling snores from the back seat, rocked by the waves and warmed by the sun. 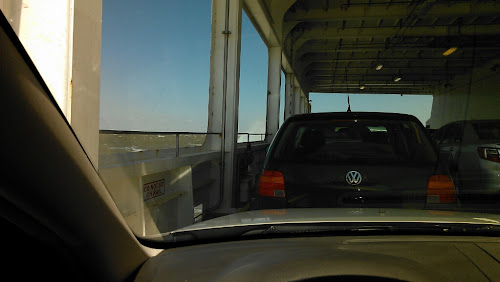 Then I had to go take a leak so I stepped out into the wind and made my way across the car deck to head upstairs, filled with foreboding by all the warnings, like a Hobbitt setting off on an Adventure: 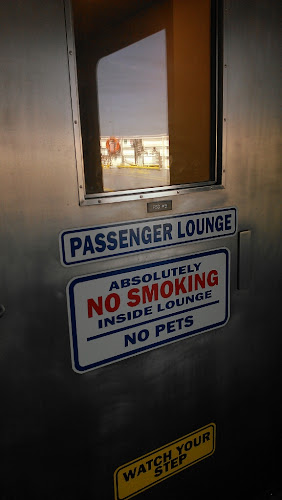 Watch my step? Which one exactly? 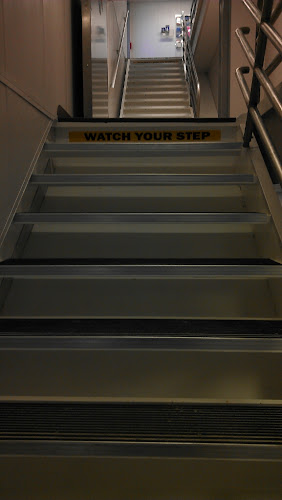 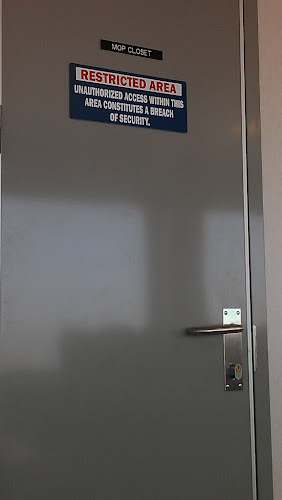 Mind you, right outside the mop closet was this friendly piece of hardware. God alone knows what armaments they keep inside the "mop closet." 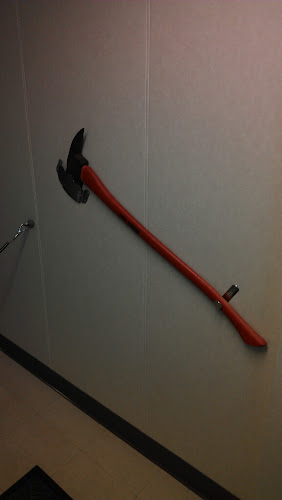 Donning a life jacket. I wonder how we would look bobbing around frozen to death in ice cold water wearing an orange horseshoe. Notice the extra axe. They had a lot of axes on this ferry. 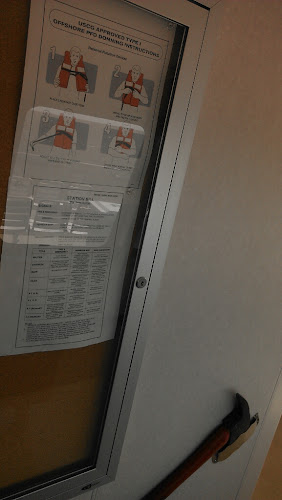 And if the mad axe murderer does get you in his sights here's the way out, as improbable as it looks. 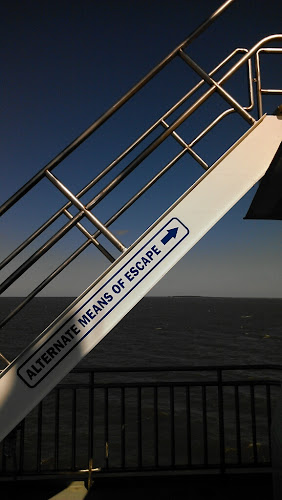 All eyes were on Ocracoke after a couple of hours steaming across the wind line. 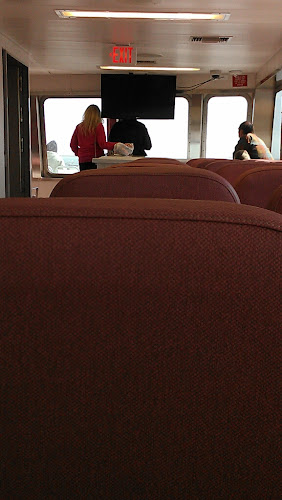 It wasn't first class accommodations but we weren't going to starve had we been blown off course and the mad axe murderer hadn't got us. Two dollars would get you lunch - including beverage. A nice sit down lunch with china plates and deferential waiters would have been nice, but I am a nostalgic traveler from another century. And a fifteen dollar ticket limits your options. 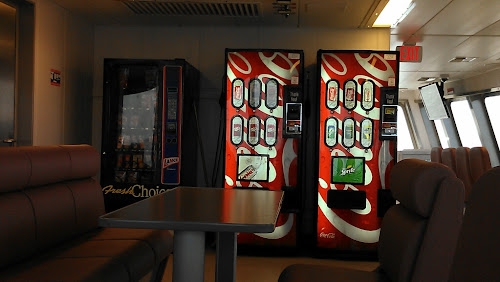 The wind was not easing up at all. 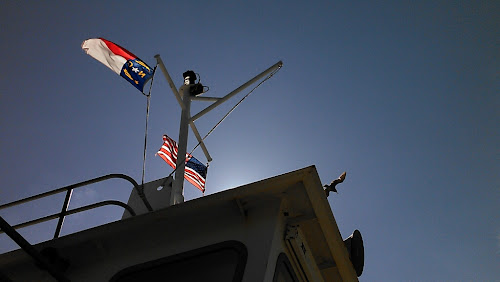 But the village was getting ever closer... 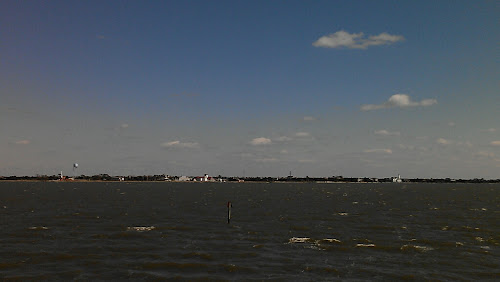 ... I confess I am a nerd but I fired up my Swiss Army phone which had no signal in the middle of the crossing but did show speeds on the GPS application. 10 knots, 12 miles per hour, 20 kilometers per hour. Ain't electronic technology great? 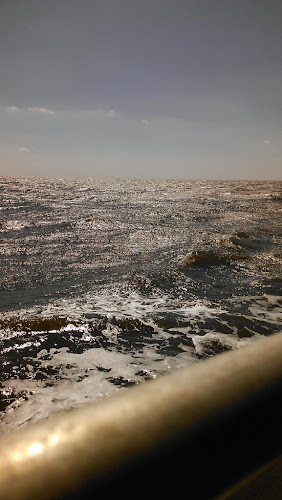 The North Carolina Teacher Training Center is the first building to greet you as you line up to land, after some distracted doofus remembers to come downstairs and get in their car...Ocracoke, what a great place to come and keep up with your teaching credential credits. 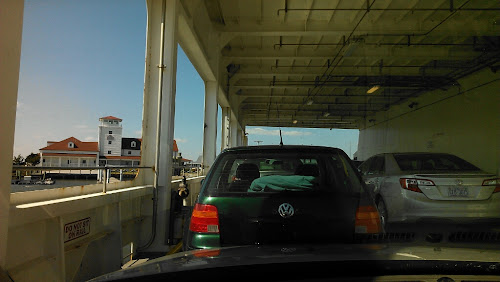 We arrived at three thirty on a lovely cold afternoon and as this wasn't our first visit we knew what to expect, which was nice, but I did miss the cheap thrill of the unknown. 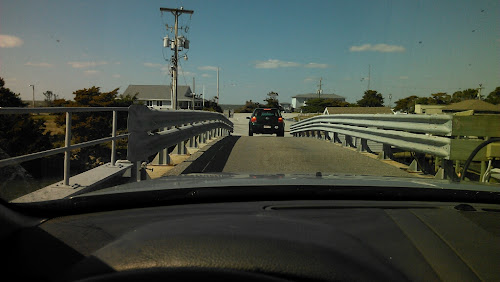 We had a funny moment as we drove into the village which has a twenty mile per hour speed limit which I was observing as this village, year round population 700, notices everything. Some dude from Georgia was a little less self aware and acting as though he had robbed the island's only bank, so he swung into the oncoming lane at full tilt and roared past us as though he had somewhere to be. Which at that moment was tailgating the next car in line... It was a mainland moment and a great reminder why kicking back in Ocracoke is so pleasant. I checked the ferry schedule and figured he was racing 13 miles to catch the 3:30 ferry to Hatteras. Which in point of fact was really dumb as the ferries start their crossings on time and ours had arrived 15 minutes late at exactly 3:30. Had it not been slowed by the winds he'd still only have had fifteen minutes to cross the island to the next boat. Better to have paused, had a coffee and a walk and planned to catch the 4:30pm boat. Silly bugger. And these streets aren't designed for racing: 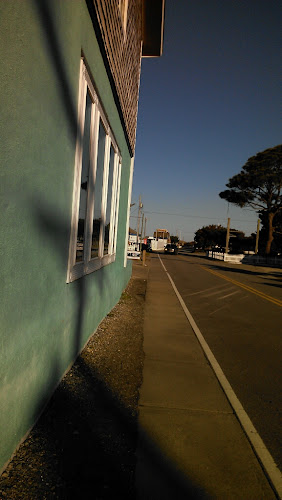 This was also a good spot to go for a walk next morning, Thursday, with my dog. 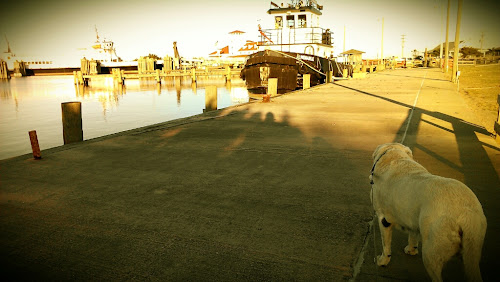 So I did. And Cheyenne thanked me.