I left out the Muslim Masjid Al Malik in this list probably because not only was I not aware of it on Emma Street but I'm pretty sure it didn't exist in August 2008 when I first published this essay. From what I can figure it's been around since about 2011 and nowadays it has moved to Whitehead and Southard Streets. Anyway here's the list I made, flawed no doubt and incomplete, but it was a good effort I think at checking out a small town with a great many places of worship.

To try to photograph every church in Key West in one go is beyond the possible.They may have found water on Mars but they haven't figured out how a single man on a motorcycle can photograph every single church in Key west without going mad. So, as a compromise I simply photographed some of the churches that I find most evocative of a style of building that I think of as either tropical funk or Caribbean Anglican, that are scattered around the island. The church that set me off is this castellated beauty which I believe is known as the Southernmost (naturally!) Prayer and Faith Center Church, which name must be abbreviated for the adherents in some manner unknown to me. In any event I photographed it on a whim when I was at Love Lane on Fleming Street recently. 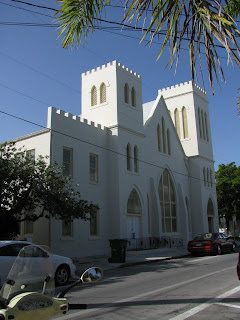 Power lines notwithstanding I find this church, recently renovated, to be a nice example of the Caribbean Anglican style of church. I call it that because I have seen numerous examples of church architecture on English speaking islands around the Caribbean that have been built in the style of the English parish churches, and their square towers or pointy steeples dominate skylines from Grenada to Jamaica, and also it turns out Key West! 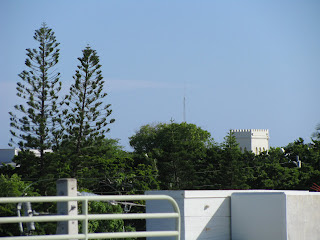 Well, dominating may be a bit hyperbolic but sure as eggs is eggs, there is the church of the long name peeking over the greenery. As far as tropical funk goes I like this one, a little run down but exhibiting the faith of the small and intimate: 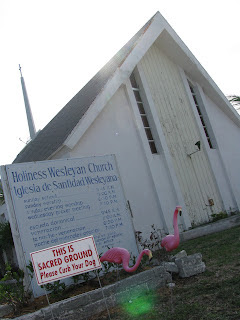 I find the notion of "holy ground" harboring plastic pink flamingos to be suitable entirely for Key West. Or take this little beauty near the hill called Solares, Key West's highest point: 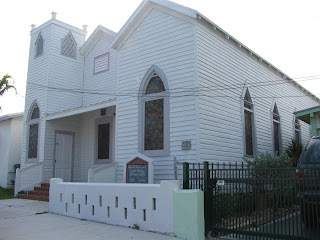 Trinity Wesleyan combines the elements of Anglican stolidity with the lovely pitched roof and slat walls typical of Key West home building.
.
This one on White Street is undergoing renovation, and like the Creole Church, caters to the "other linguistically abled" congregation. God is a polyglot, though His adherents never did manage to build the tower : 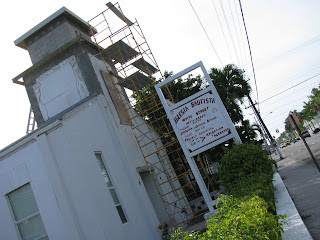 When I was a juvenile delinquent altar boy The Church of Rome required its' adherents world wide to pray in the one true language, impenetrably enough that had to be Latin. And as St Francis reputedly taught us, once its learned as a child, whatever it is, it's never forgotten! Indeed i remember many of the responses still, from those far away days. Nowadays along with eating meat on Fridays the Catholic heirarchy has relented and Mass at St Marys is recited in the vernacular. So the traditions change and yet these lovely structures remain: 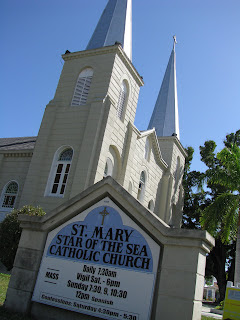 This is the big old church on Truman Avenue at Windsor Lane on the way into Old Town. It's the heart of the extensive Catholic community in Key West and it makes it's own statement about size and architecture: 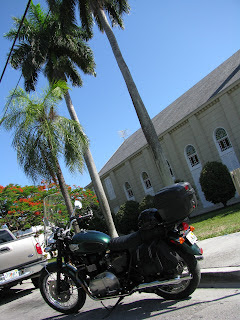 St Marys operates a school, a soup kitchen, a grotto built to protect the city in case of hurricanes (napping apparently during Wilma) and that most Catholic of institutions, a gift shop: 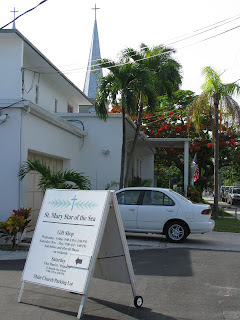 When in 2007 my peripatetic Jewish wife went for the first time to St Peter's in the Vatican she stood in awe, her jaw literally dropping, under the vastness of the rococo embellishments of the vast basilica and confessed that for the first time she understood the worldwide reach of the Roman Church. Outside she was equally astonished by the trinket trade in plaster Madonnas and graphic artwork for sale in the streets surrounding the Holy See. Needs must and they do a roaring trade. Its not exactly money changers in the temple even though I find the gift shop trade rather tacky.
.
Not far from St Marys lies the oldest synagogue in Florida and very unprepossessing it is too, architecturally speaking: 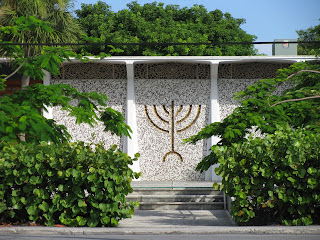 It's history in the Southernmost City is frequently held up as an example of tolerance in Key West but a few years ago some unidentified anti Semite torched the place, which became the opportunity for the neighboring churches to send the opposite message and they grabbed it wholeheartedly offering the synagogue space in their churches. Which incidentally would have got you a roasting in hell in the Catholic Church I grew up in, but times change and sometimes for the better.


There are tons of little churches on side streets everywhere, some more visible some I pass all the time and never notice till I am stalking them with my camera: 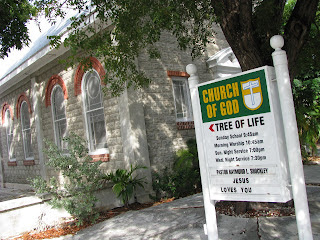 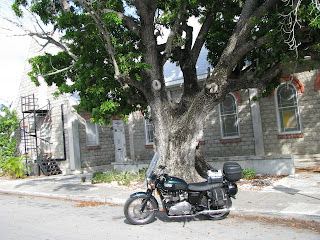 And this one on Elizabeth Street which I stopped to photograph while heading for another church I did remember seeing around here. Its the paradox of life itself; that which you stumble across while not looking for it: 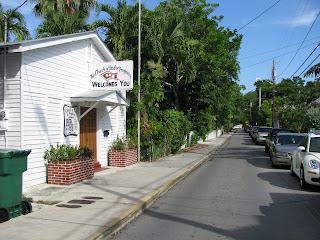 Not forgetting the Unitarians in The Meadows with their delightful old Florida louvered windows. Either the building is lo-o-o-ng or my Bonneville is shrinking: 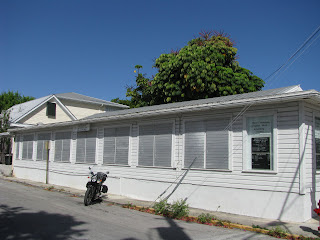 There is a persistent sign holder plaguing downtown Key West ever since Fantasy Fest, and he holds up a notice encouraging people to believe that queers go to hell, by virtue of their gayness. Apparently this bald statement is supposed to be an encouragement to Key West gays to change their ways which is a proposition I find bizarre, human nature being what it is, and I doubt it would gain much traction at the Metropolitan Community Church just up the street from the Unitarians: 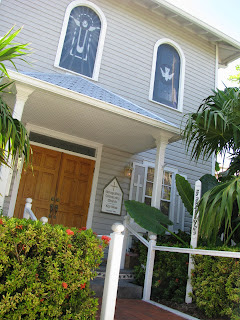 It surprised me when I realised just how many churches there are in Key West. I think the number and variety of them (a Mosque interestingly enough does not appear to exist) of which these are a tiny sample speaks to the fact that even a rootless shiftless migrating community like that viewed superficially in the Keys in fact has a population that demands the rooted sense of community that churches bring to a town. Churches in Key West seem to thrive because many many people in Party Town USA are just ordinary people raising families and going to work. They are why I like living in Key West, not because I can go to Sloppy Joe's and get tanked whenever I feel like it, but because I work in a small town that has real roots, despite any appearances to the contrary. Of course there are those that manage to slip off the bottom rung of the societal ladder: 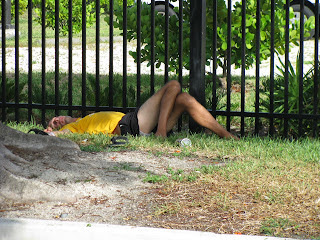 And the churches minister to them and their needs. The Salvation Army is prominent in town, and made a spectacle of itself by declining to hire a gay office worker on the grounds of the old going to hell problem, but hey no one's perfect. They help a lot of people regardless of orientation who come looking for it. This sleeper chose his spot well because when he awakes the beacon of Glad Tidings will be across the way, a church noted for its services to the down and out: 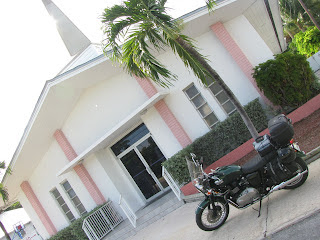 On Flagler Avenue there is a big time soup kitchen across from this Lutheran erection. It's some sort of Buckminster Fuller apparition lacking the conviction to go all the way and become a real geodesic dome. What the Tudor style wooden beam highlights are doing I'm not sure: 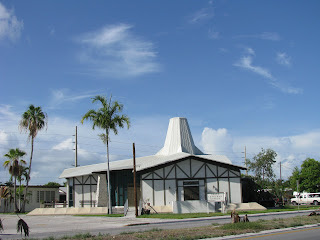 The attached school enjoys a fine reputation and is housed in a more conventional if rather dull building. I think in my next life I would like to be an architect and offer my services in communities across the country that would like to see proportioned attractive buildings housing their banks and churches and public offices. Whimsy is delightful but it hurts the eyes after a while: 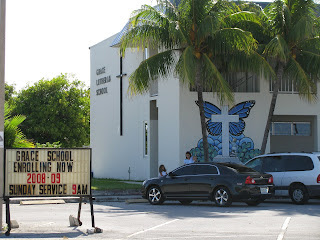 My hat is off to them if they can round up a congregation at that unearthly hour. Oh, wait a minute, I think it says nine am not five am, nevertheless.....

There's my old favorite the Methodist Church on Eaton at Simonton. Awhile back I highlighted the swooping roof of the entryway of the hall which I think is lovely and Polynesian: 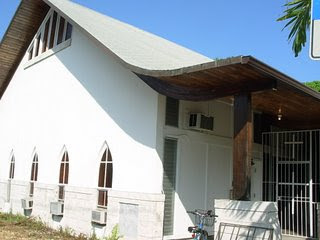 Especially when contrasted with the traditional church it is attached to. You don't get to see enclosed porches like that very often at rthese latitudes: On Simonton Street not far away is another white castle of a church, a fine enough construction in its way: 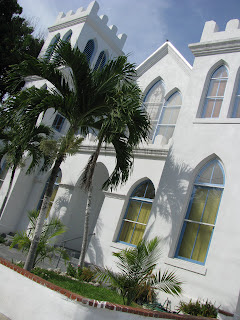 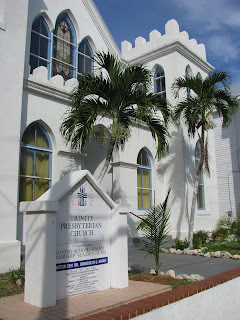 But out of this series of buildings my hands down favorite is the church at the 800 block of Center Street. This a two block street between Petronia Street and Truman Avenue. To find it simply turn north off Truman at the over sized Adirondack Chair. 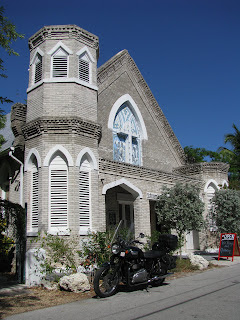 Clearly a church I would rate as Anglican Caribbean, from the exterior it has the attributes of stolidity from the interior it is cool and dark to make it a restful and intriguing place to sit and not think: 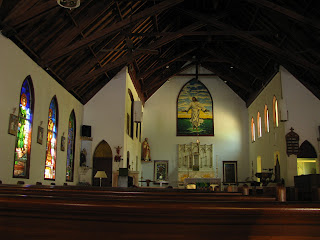 And when such a place invites one in, what can one do but respond? 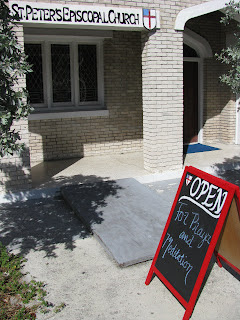 I like a church old fashioned enough to leave its doors flung open, and this place apparently is supported by a busy congregation judging by the overflowing community bulletin board inside. It was a break I thoroughly enjoyed and I put my camera away for a few minutes and emptied my head. On returning to the outside world all I could see was light and heat and busyness, again. 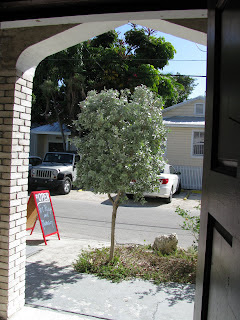 All those drunks need ambulances and police, all night long! God help me...
Posted by Conchscooter at 12:00 AM No comments: