Howard Sands died at Pisseloup in the Second Battle of the Marne on July 19th 1918, in the last year of World War One. His memory is preserved in this handwritten sign at the corner of Frances and Petronia Streets though for how long one doesn't know. The house is for sale to anyone with three million dollars to spare. 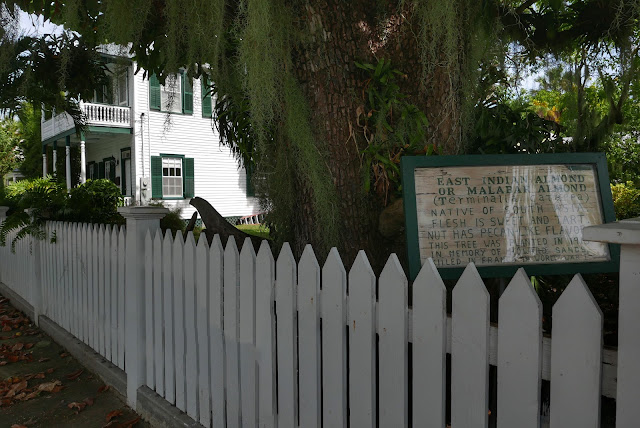 Howard Sands was 18 and died after a month in France as the Germans tried one last big offensive before the Armistice was signed in November. His father who lived on Eaton Street was the one officially notified of the young man's death in France.  And the tree planted here a century ago flourishes. 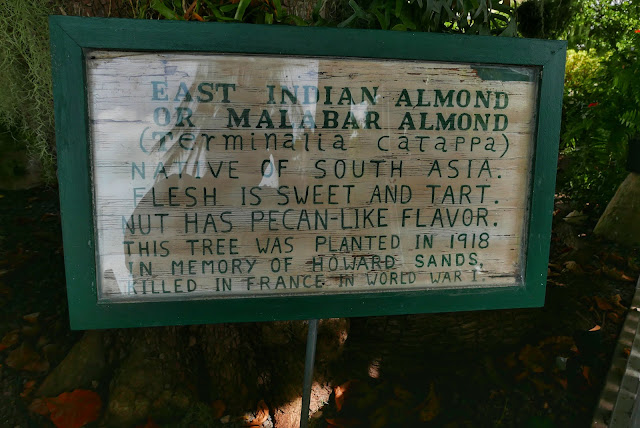 The house used to be occupied by an old Conch woman, a  lady I dare say who could be seen every day dealing with the heavy snowdrift of leaves dropped by the tree. In old school style she took a  broom to the sidewalks around her house and not a noisy leaf blower, the choice of those unable to wield a broom to full effect. I had a friend who crossed swords with her and when he told me she was mean I felt privately that she deserved a tip of the hat. I never had the nerve to approach her but with antecedents like hers she had much to live up to and she did it well. 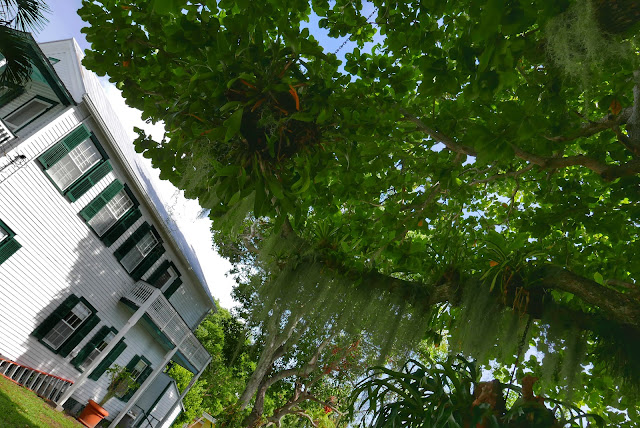 Trees are protected in Key West even though signs aren't and even trees can be cut down legally on a  pretext so one wonders if the new owners will want to remember Key West's past. Not many seem to these days. Three million dollars buys you some latitude in these matters. 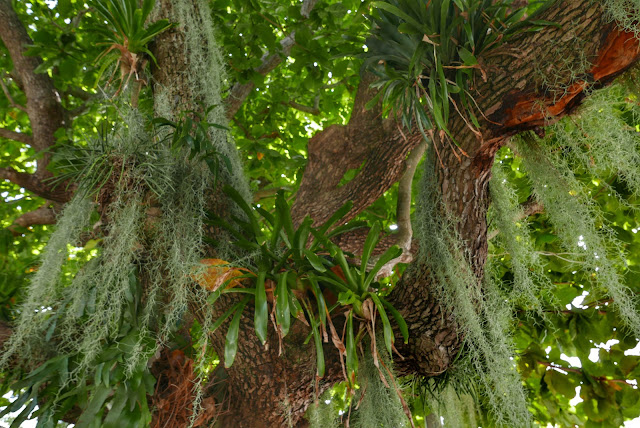 I like to come down Petronia from White Street to Frances partly because I enjoy the Conch architecture but also I like the shade thrown by the Malabar Tree. The Sands name is memorialized in public housing in Key West but this tree marks someone from key West who went a long way away to try to do some good and got killed for it. An admirable dedication to what's right and not what I would call a sucker and a loser. I find World War One particularly painful as it marked the switch from 19th century warfare to the brutality of mass killing by mechanical and scientific means with limited medical care and terrible physical discomfort. To go from Key West to the trenches of the Western Front must have been mind boggling. And six months later the survivors started to go home. 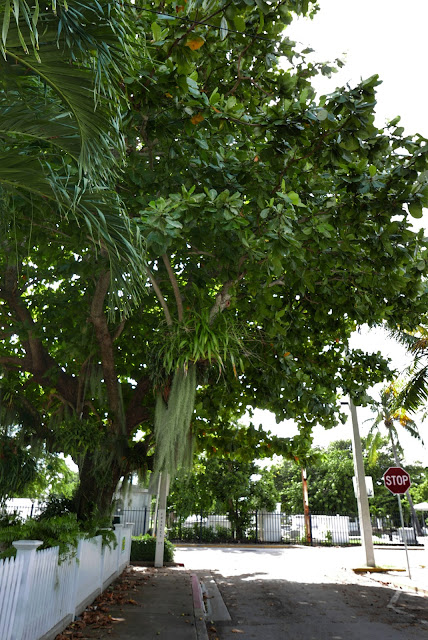 Wandering up to Ashe Street I found life spilling over onto the sidewalk, in bright colors. 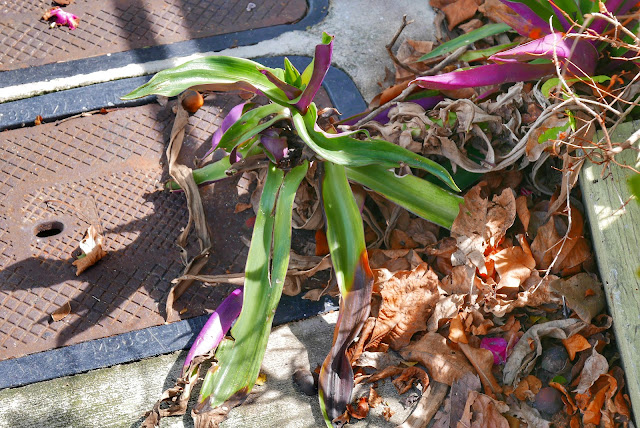 With World War One and its losses in the history books, Key West benefited from World War Two by having water piped to the city from Miami to supply the wartime navy base. For the first time there was a relative abundance of reliable drinking water in a town that had lurched through seasons by catching rainwater. Until then Key West was not nearly as green and filled with plants and trees as it is today. You simply couldn't waste water growing ornaments. Nowadays it's  a different story, and very glad I am too. 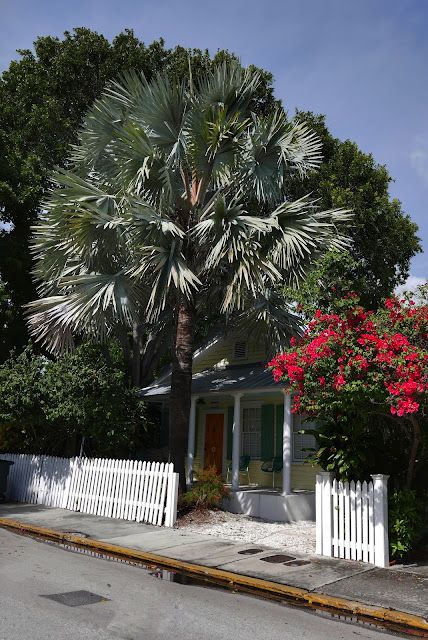 I passed a couple of eyebrow houses which display an architectural feature that has made them famous despite the fact it doesn't work as intended. The eyebrow was supposed to allow air to circulate upstairs even when it was raining but all it did was trap hot air and didn't help. But it looks pretty. 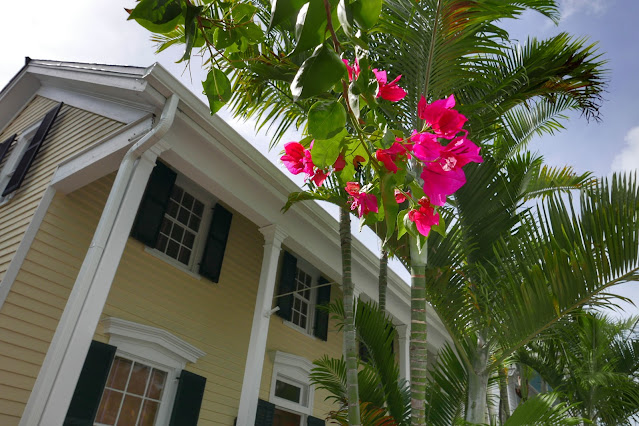 As do the flowers on the streets. The blessings of water! In abundance. 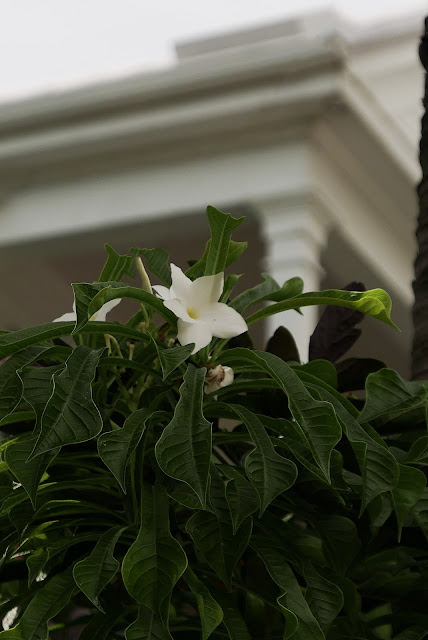