I have no idea why I stopped to pick up the wiry young man on the side of the road. Even as I slowed the car on the stretch of US One approaching Big Pine from the south I was looking in my mirror wondering how many slow pokes would nudge past me while I played the Good Samaritan with some junior league alcoholic hitching a free ride. For some reason I stopped and let him hop in and the gods were on my side for he was an interesting companion for the ninety minute ride to his destination, outside the Key Largo Publix at Mile Marker 101. 25 year old Andrew is spending the winter in the Upper Keys teaching youngsters the joys of open boat sailing from the Pennekamp State Park base of Outward Bound. 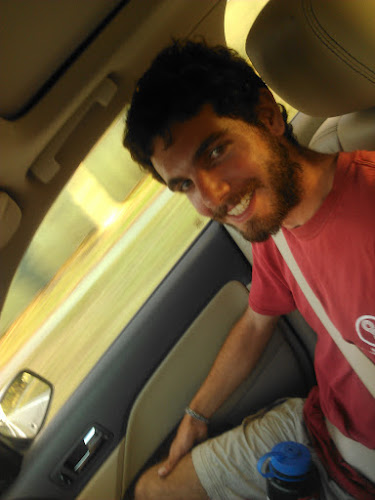 I didn't know much about the modern Outward Bound but after I got home I looked them up and these days they have 40 bases around the world to teach wilderness survival and teamwork and leadership to adults and kids. Andrew works with another instructor and takes a load of kids out on an open thirty foot sailboat for a matter of days or weeks putting up a tent over the boat each night! They live off one car battery for minimal electrical use, no cell phones and no boat motor. I remarked that the experience was probably going to leave its mark on those youngsters for life. Andrew does similar work in Maine in the summer at another Outward Bound school. He also has plans to go home to Long Beach, California where he crews on a square rigger taking students sailing in California's Channel Islands.

Andrew lives in Key Largo in employee housing, has no car and admits there isn't much to do on his few days off. He got a ride with a colleague to Key West the day before and was hitchinging, successfully, back home. Had he failed to make the ride he was planning on sleeping rough using his "bivvy" contained in his rather diminutive pack, which along with a bright red ukulele was his only sign of luggage. It made me realize how old I am when I shuddered at the thought of sleeping in bushes alongside Highway One with no wheels at my side. I enjoy roughing it when riding my motorcycle but I feel like I am master of my fate with my machine at my side. On foot, in an urban agglomeration it seems a whole different thing.

It's funny but I have always treasured having wheels even before I came to the States where a pedestrian outside Key West is the lowest form of life. I never hitch hiked when I was a youngster as I would rather ride my motorcycle through a rain storm than ride a train, when I had a choice. I remember taking a course in south London when I was in my twenties and the ride from my father's house where I lived for free for the duration was about thirty minutes, which was pretty hairy when snow was on the ground and I rode feet down sliding like a sleigh. Better that than on foot!

He said it can get cold and wet on the boat but the idea is to toughen up the students and let them make their own mistakes which helps them grow. And Andrew himself is growing, taking his time, enjoying life, working outside a career path with the full backing of his family. We had an interesting time talking about sailing, discussing anchorages and generally being nerdy about boats and life. Like any sport or activity if you know what you are talking about your listener knows, and with sailing its easy to spot a fake such is the peculiar language of boating. Ours wasn't a conversation about bragging rights as I told him about my experiences traveling and he told me about his much less selfish experiences passing on the love of sail to a new generation. I was sorry to see him go, which he did faster than I could take a picture, which I knew was going to happen which is why I snagged a picture in the car as we rode down the highway together exchanging ideas.

It actually was better than listening to the radio, and for me that's saying a lot.
Outward Bound - Wikipedia, the free encyclopedia

Posted with Blogsy
Posted by Conchscooter at 3:00 AM 7 comments: