A Short Walk On Sugarloaf Key

For once I started out on a walk properly equipped. I had sprayed myself with mosquito repellent, and "slathered" ( I hate that word) suncream delicately upon my face and loaded two bottles of water and a plastic bag into my back pack. The lingering breezes of a late cold front had inspired me to consider finding the end of a particularly mysterious, winding trail on the south shore of Sugarloaf Key. 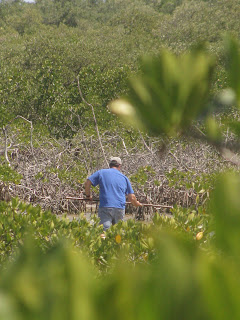 There were two cars parked at the trail head, one a work van which I suspect belonged to this dude probably hunting for bait while shouting on his cell phone in the marshes. His bicycle was parked, unlocked where I could have stolen it. The Keys of an era gone by, unhappily. 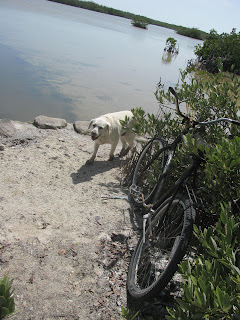 Cheyenne and I have walked the trail, old State Road 939A several times but this time I wanted to get to the end, which I had measured as four miles away. An hour and a half I figured in delightful mixtures of sun and shade. 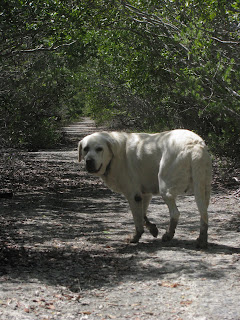 The fish float is a popular decorative motif in the Keys' wilderness. 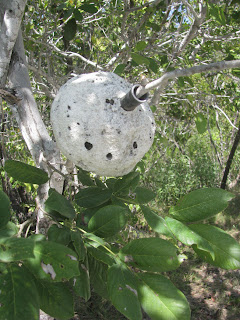 Someone abandoned a package of bait along the trail. We were forty minutes into our walk when Cheyenne sniffed and passed on by. Sun cooked whole shrimp are not to her taste, it seems. 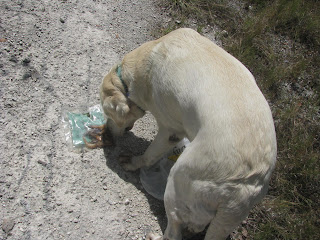 It was time for a pause that refreshes. I put my baseball cap into a plastic bag and filled it with water. 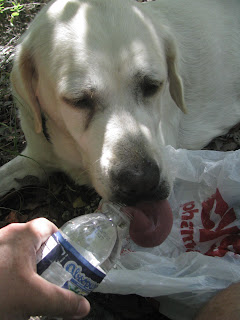 I used to own a collapsible nylon water dish for dogs but we live in a brave new economic world and a plastic bag has lots of re-usable uses. And it's cheap. Ha! here come the owners of the other car at the trail head. Sensible people using bicycles instead of ambling. 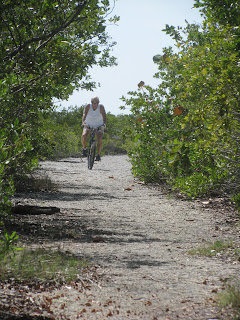 However when you walk you get the time to look around and enjoy the view. Looking north: 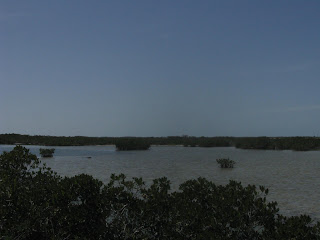 Or you can stop and try to take a picture of mangrove snappers swirling in the not completely clear waters. 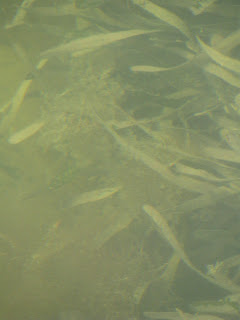 Yes, I know, I missed the fish altogether. Cheyenne was still frisky at this stage and hunting for smells in the bushes. 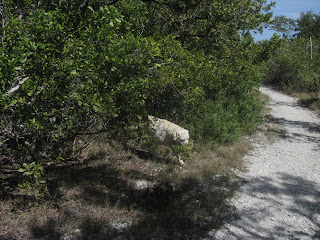 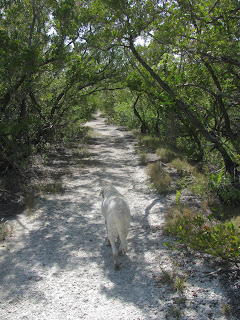 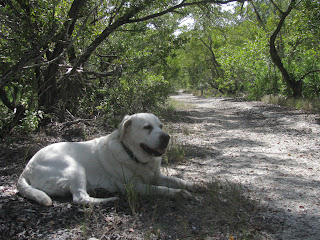 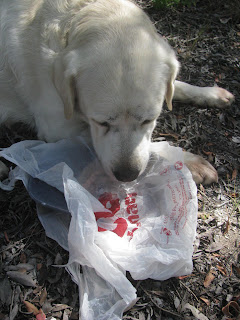 I have to confess to a small oddity in my life. I grew up reading Italian comic books and much to my surprise when I started going back for visits I discovered a book stall in Terni where they sell old copies of my favorite stories. They are lightweight and easy to read and usually I read them late at night at work when I'm tired and pictures are a relief for tired middle aged eyes. I happened to have one in my pack and because I had forgotten the paper I amused myself with Tex Willer for twenty minutes while Cheyenne napped. 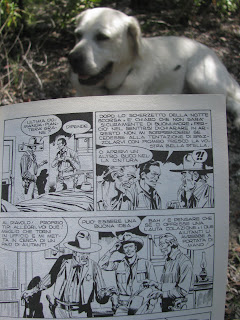 The Hand of Destiny was a rip snorting adventure set in New Mexico and in case you were worried Tex and Kit Carson put the evil doers to rights by the end of the episode. 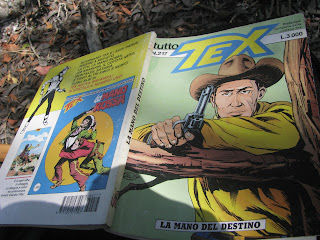 By which time we had to get a move on to reach the end of the trail. 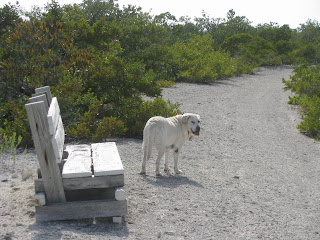 Some kind person put out three heavy duty benches where I figured the trail was soon about to end. 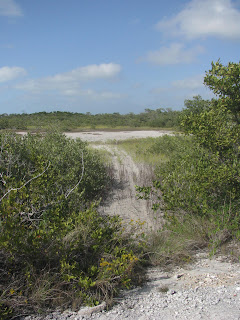 Nope, no end in sight and I decided not to spend time wandering the enticing salt flats. I checked my cell phone and to my horror discovered we had been walking for two hours and no way was I going to be home before my wife. I knew we were close to the end, open water was opening up on either side of the trail and I could smell salt air blowing. Finally, two and a half anxious hours after we left the kennel at the trail head we reached the end of the trail. 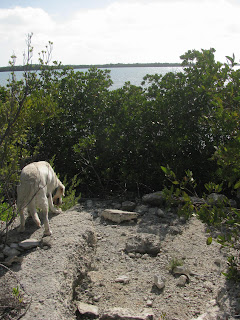 It was not a very exciting end, I had hoped for a small beach with perhaps a sturdy home made bench set under a mangrove to admire the view... 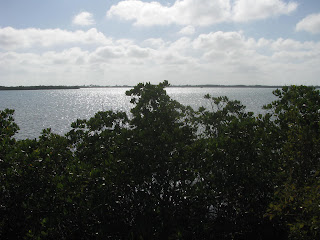 I could see Big Coppitt across the waters of Saddlebunch Harbor but that was it, nowhere to sit, no guest book to sign. We turned around. 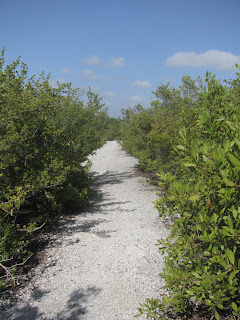 Like mountaineers who summit Everest we turned to retrace our steps with all the let down that success brings in it's wake. I realized now I was going to hear from wife on her way home and I was going to have to point out I was lost somewhere in the mangroves. It was not going to be a pleasant conversation. Which was the moment I realized my shadow was no longer at my side. 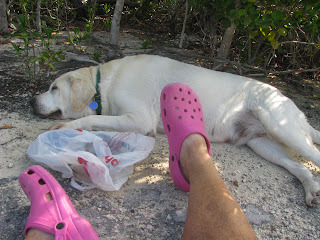 Oh God! I thought as I stretched out alongside her, I've killed my dog. From here the walk turned into an endurance trek, not so much for me as for my 8 year old dog. It was hot and sticky and she was panting. I picked her up and carried her 73 pounds as long as I could through the sunny patches of the trail. I found a plywood sheet and attached a piece of found fishing line and tried to persuade her to sit on it as I pulled. She was having none of it. Measure my concern by the lack of pictures. We staggered on until the damned phone rang. It went better than I had hoped though I suspect she was laughing at me, not with me. She agreed to drive to my car and meet on the trail. The sun was heading down to the horizon, shadows were lengthening and I was starting to feel lonely and not a little stupid. Finally... 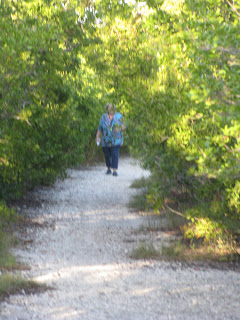 It was the best feeling in the world to ask that time worn cliché of a question: "How was your day?" after Cheyenne had finished greeting her savior with a wagging tail and jumps of relief. So we walked on with renewed energy ( and no more dog carrying thank God, my arms were falling out at the sockets) and my wife prattled on about her day at school and a tobacco whistle blower called Victor somebody who had told the girls about the true dangers of smoking...and my mind wandered off glad that this monstrous expedition had been reduced magically to it's proper proportion of just a family walk in the woods before dinner. 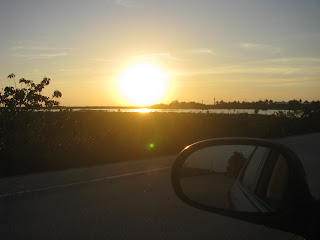 Who knew you could end up walking eight miles through the mangroves and never be out of the wilderness? I do, now.
Posted by Conchscooter at 12:00 AM No comments: