First published here on April 21st 2009. I miss the waters of Ramrod Key in Newfound Harbor for interesting boating with swimming holes and diverse anchorages. The canal was long and overused so there were too many boats to swim in it but the waters outside the canal were lovely.  The only thing I miss about that island are the boat rides:
A sunny day on my canal, my wife has gone to Fort Jefferson 70 miles west of key west with a friend, I am alone at home on a Saturday morning on my alternating weekend off. What to do? 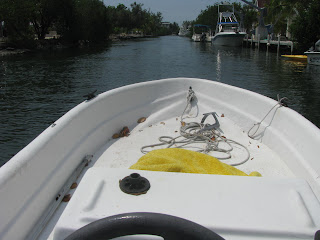 When she got back the report of a night spent on a friend's boat at the Dry Tortugas should have filled me with envy, instead I felt just a twinge because I too had been out and about on the water creating adventure for myself. I decided to leave home with a bottle of water and no cell phone. Were I to need help I was going to have to find it on my own. I did leave a float plan on the kitchen counter for burglars and my wife to find: Gone to Tarpon Belly Key via Niles Channel, alone. I figured that covered all that a rescue party might need to know, so I swiped some sunscreen on and got going: 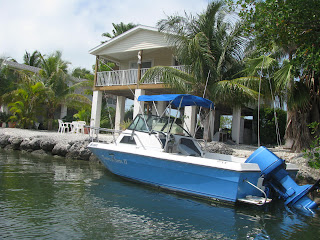 I have always wanted to live on a canal with a boat at my dock, and now that I do and have done for half a decade I find myself still marveling at my good fortune that my canal on Ramrod Key is overflowing with mangroves and the houses follow no distinct architectural models: 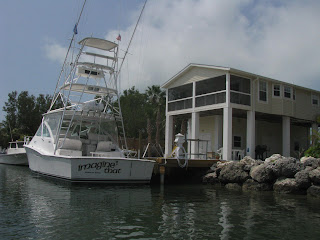 And then a pause for incoming traffic: 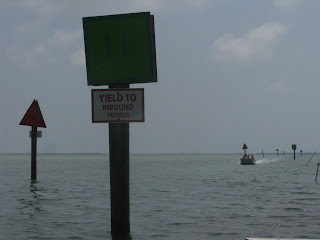 Finally up onto a plane, 20-something miles per hour out into Newfound Harbor. My boat, a 14 foot (4 meter) Dusky, has no lights or instruments, as simple a machine as I could find after years of struggling with systems on my sailboat, but it tracks true across the water: 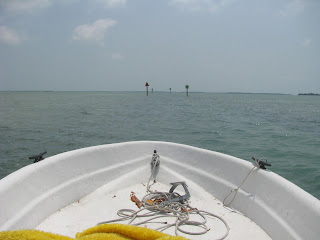 My idea was to buck the light south wind for a mile and take a short cut to Niles Channel where I will head north with the wind at my back. The day was hazy and the water was hard to read but the bubba sticks made it easy to find my way: 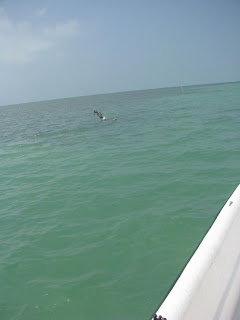 Past the boats anchored near the Niles Channel Bridge; these are the waters I stare down upon from the crown of the 40 foot bridge as I pass over on my Triumph: 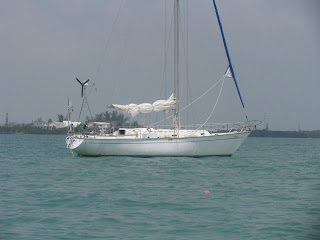 The anchorage is down here and the Triumph is up there: 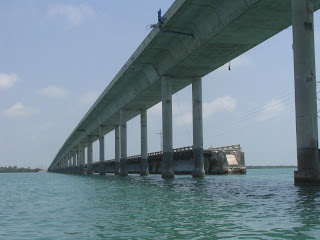 The ability to be down here from time to time makes it entirely pleasant to be up there commuting, knowing that with ten minutes in my boat I can be down here. Some days I'm up there and the weather is foul and I'm glad I'm not down here, being tossed around. Beyond the bridge are the open waters of Niles Channel stretching to the Gulf of Mexico: 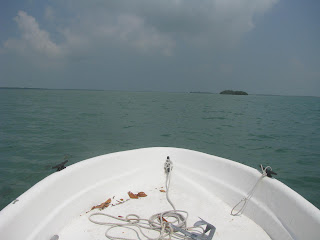 With the small matter of a shoal area in the middle marked by two mangrove islands. the northernmost one was I believe called Money Key, until a wealthy musician bought it and changed the name to Melody Key, though the chart shows it as Howell Key. The island is a couple of acres in size and has a house on it: 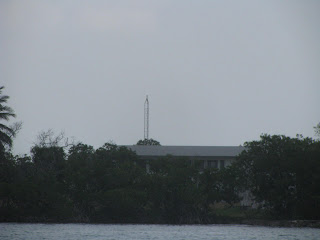 It seems an inconvenient place to live, a fact that has occurred to the current owner apparently, because for the unattainable sum of four point five million dollars, reportedly, this lump of mangrove could change hands. The views aren't bad if you, like me, enjoy flat waters: 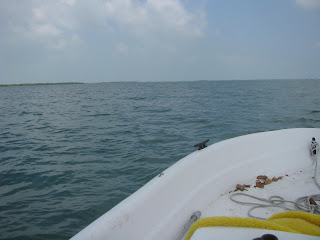 Because I was alone, footloose and fancy free I decided to bugger about a bit off the main channel and explore the mangrove passages. I cut directly to the west across the top of Knock'em Down Keys, a spot that seems godforsaken enough that no one would be there yet, lo and behold, an angler: 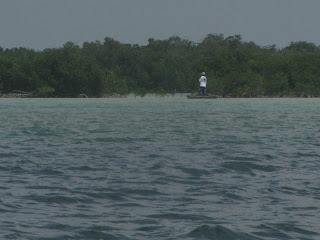 Travel between mangrove islands in areas where the charts (if I'd had one) show shallow water is easy enough if you have a grasp of the basics. First read the water, and you need sunlight from behind you to do that. The ditty goes: Brown, brown run aground; white, white yes you might; green, green nice and clean; blue, blue straight on through. Which may or may not be helpful in determining water depth. I try to keep an eye on the vegetation because it's easy to slide too close to one side or the other of a channel if you aren't keeping your eyes open. Luckily the bottom in the back country shelves pretty uniformly in most places and it's unlikely you will go from four feet of water to none without warning. One hopes. If all else fails wave to the military at the blimp base on the northern tip of Cudjoe Key. Maybe they will take an interest in your welfare. 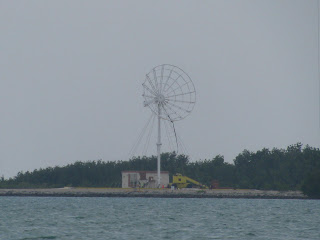 You'd better believe they'll take an interest if you stumble ashore on their heavily protected base. And as one turns and heads north again to open water there they are again, anglers feeding the fish all over the place: 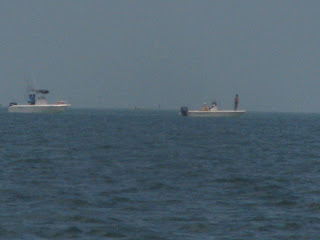 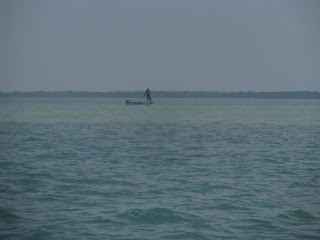 And then finally, about 45 minutes after I left my dock, the object of the exercise hove into view, a long line of mangroves, from a distance a dark patch on the water, one island among many. Except, this one has a beach: 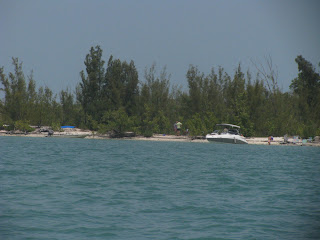 Tarpon Belly Key has the distinction of being an actual island with dirt, pebbles, a very little sand and trees of the casuarina type growing above the waterline. There is also evidence of human use on the island with large blocks of cement lying around as though tossed carelessly aside. Tarpon Belly was once used to farm seafood, shrimp as I recall and my friend Robert remembers when there was a functioning truck sitting on the island used to haul materials around. Now all is in ruins and very picturesque it is too, overgrown and deserted. Except I had forgotten this was Easter weekend and everyone and his brother was out splashing around at Tarpon Belly Key. It looked like an RV Park: 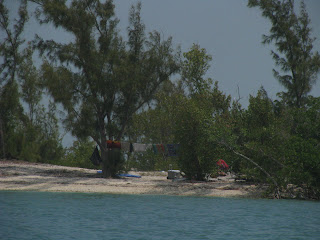 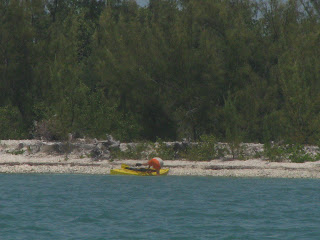 I figured this was neither the time nor the place for a meditative swim off the beach so I got back up on a plane, and made like a leaf and blew. Back out on the water buzzing along, the wind in my hair and the sunscreen bubbling under the sun, it could have been worse. They'll be gone soon, I said to myself, and I'll still be here. And presumably Tarpon Belly Key will be there too. 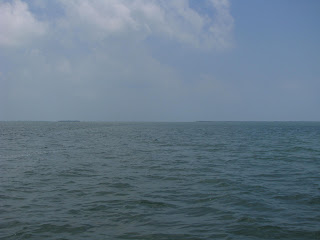 And so back to Niles Channel Bridge. I was pondering so deeply on the injustice of other people getting time off at the same time as myself that I managed to take a wrong turn and found myself once again blundering around in mangrove channels unfamiliar to me. This time it wasn't fun because I wanted to get home. It's amazing how invisible the Nile Channel Bridge can be when there is a mangrove island between you and it, for all that it rises to the giddy height of 40 feet above the water. Eventually I got my bearings and got going again. I wonder how people will ever recall the peculiar feeling of being lost, even if for a moment, in a time when people turn on their GPS receivers even when driving even on Highway One, the only road available to them. 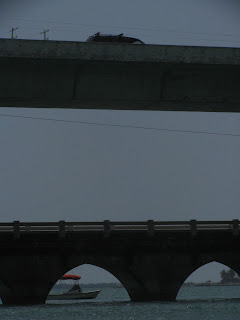 I slowed down for a bit and played with the camera and the Old Flagler Bridge and the new arching Highway bridge. 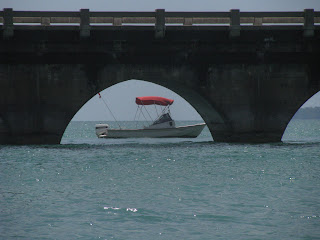 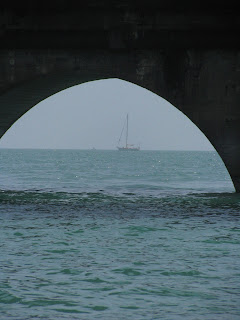 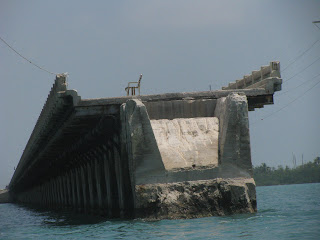 And then, off I went to park the boat and take a walk.. 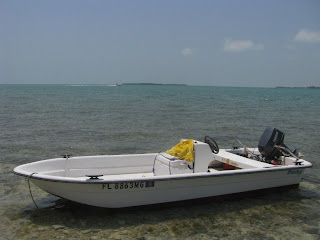 ...but that is another essay for another day.
Posted by Conchscooter at 12:00 AM 1 comment: