The National Weather Service on White Street wasn't messing around. They spoke of the coldest air mass this season, strong winds and wind chills possibly into the 30s. All of which may sound like small beer to people wading through snowdrifts to their cars but as we shall see my winter "gear" is a windproof jacket and a pair of socks. I find it hard to explain but temperatures this low are reserved for people from Up North with lily white legs (they are the ones in shorts) and minimal sun exposure; for everyone else it's simply very cold. 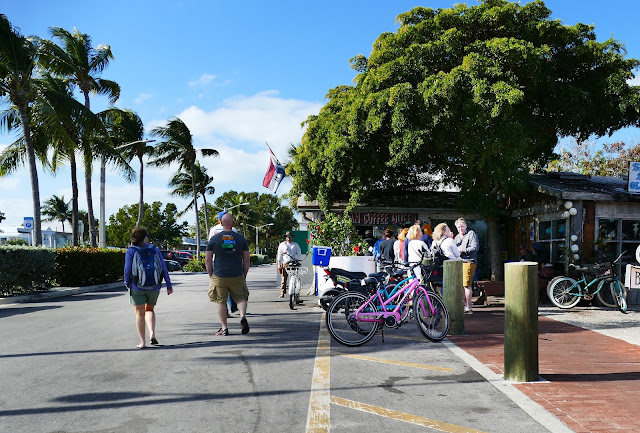 For normal people around here a projected wind chill of 36 calls for strong Cuban coffee at least and anyone lucky enough to have heat will be firing up the coils while enjoying the smell of singed cat hair given off by long disused heating elements. Anyone needing to air out those parts long since given up to heat and humidity has only to splay themselves out in one of many locations exposed to the northwest winds and all memories of humidity will be blown away. See below. 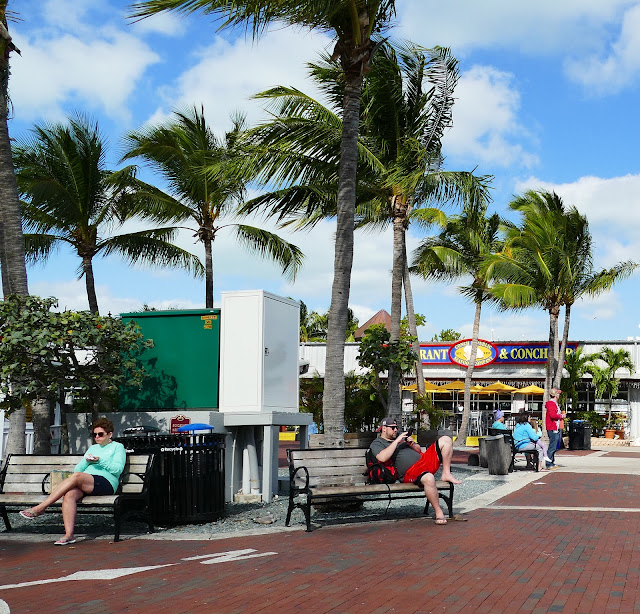 Life goes on and tourists expecting a blistering summer in January will be disappointed by these conditions. Food will continue to be served even in places like Conch Republic Seafood, a restaurant that usually offers the full seafront experience by not having gauche window panes between diners and the salt water. 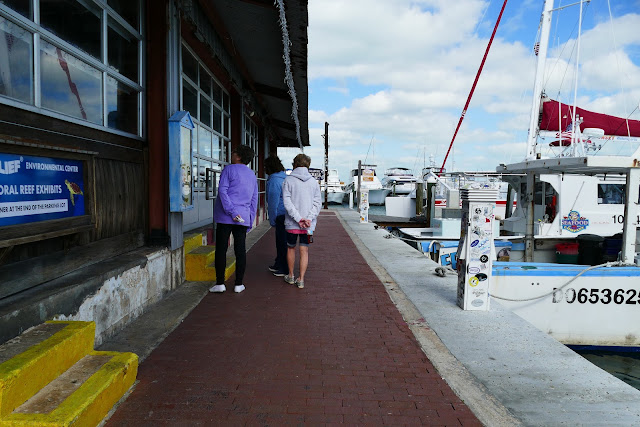 Schooner Wharf Bar, also a north facing waterfront eatery solves the problem similarly with plastic windows. Not exactly tropical but they do the job for the souls brave enough to abandon their frigid rooms. 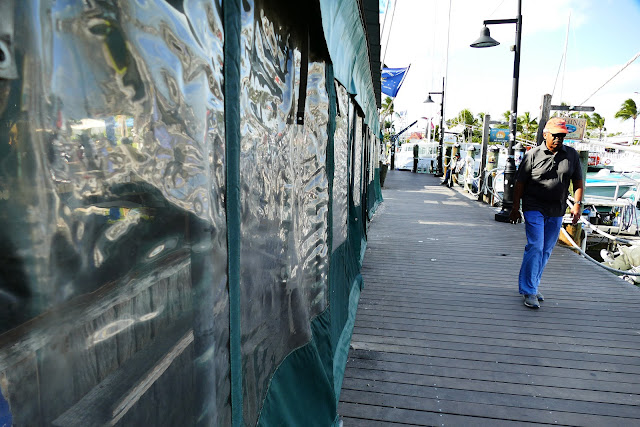 All fishing I am told goes down the commode in this weather. The weather service was screaming about Small Craft Advisories last I looked in an effort to stop even  the most determined from setting forth to do battle in inadequate vessels. 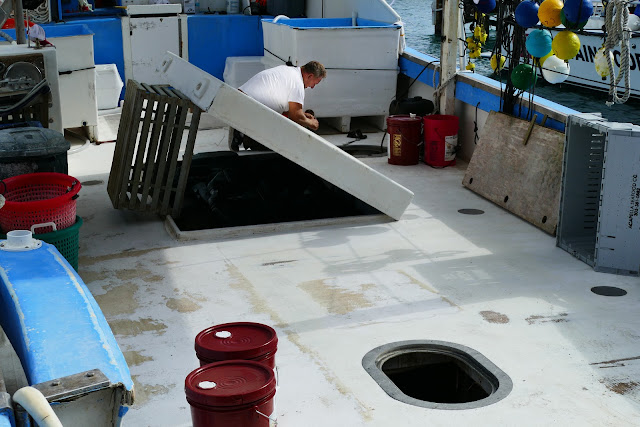 The operators of the most seaworthy craft were taking yesterday to do maintenance. Nevertheless we can rely on some few stalwarts to try to face. high seas and strong winds in center consoles and heaven forbid pontoon boats. They've done it before but one hopes wisdom will keep visiting pirates safely ashore in winds this strong. 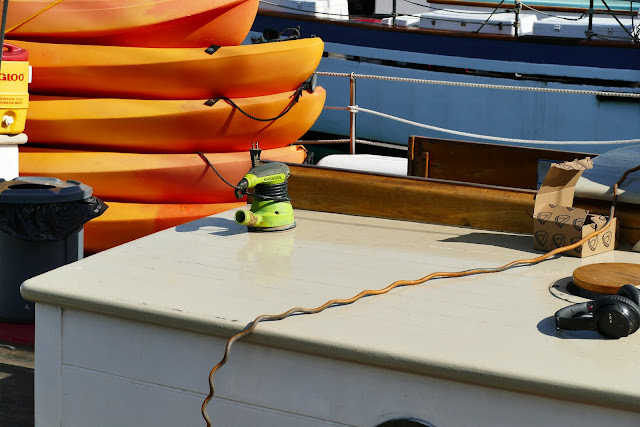 It was a funny day yesterday which I only worked a half shift so I had a chance to wander before going to the gym. After that interlude my efforts to leave Key West were thwarted for about 45 minutes by a. serious accident involving a scooter apparently on North Roosevelt. After I got over my PTSD (and I trust without much hope a helmet was worn) I found myself in an endless slow moving line with the smart people pushing and cutting in. The wreck pushed everyone onto Flagler Avenue which I had previously chosen as my escape route from the city merely to avoid the usual crush of crazies on the Boulevard. It turns out everyone else was clogging up my "private road." Very funny. At least this time it wasn't me on the helicopter so I was able to take the inconvenience with equanimity. 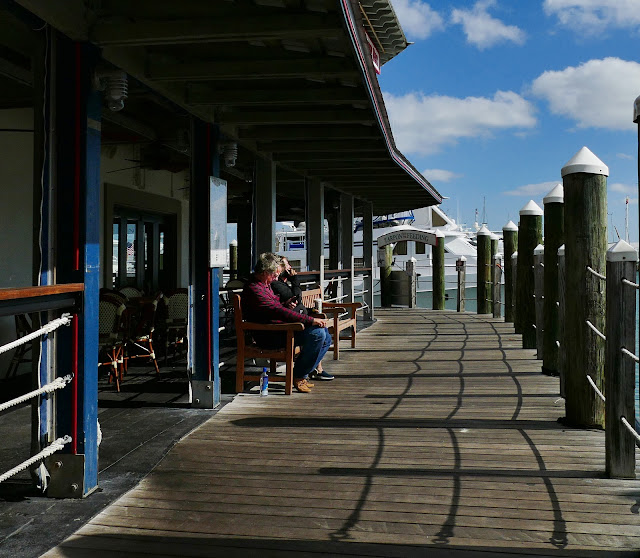 Then two trucks had a meeting on Ramrod Key and closed Highway One but that only prevented me from taking Rusty to his favorite afternoon walk. What it did to the lives of those involved I don't know but I have an idea.  So by the time I did arrive home an hour late he was just glad to see me. Equipped as he is with a  thick fur coat he was ready for a walk whether I was or not... 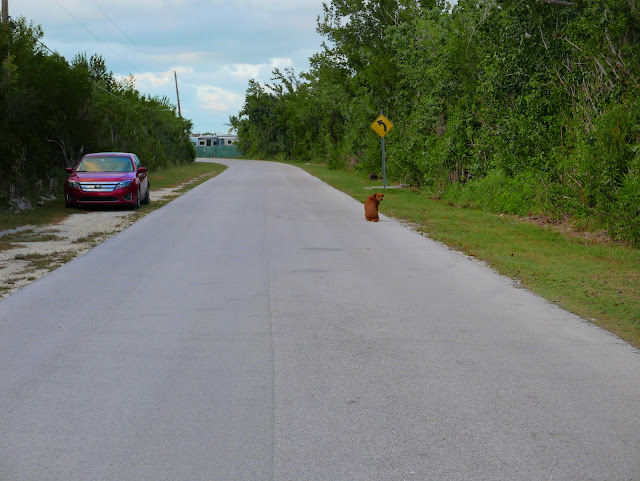 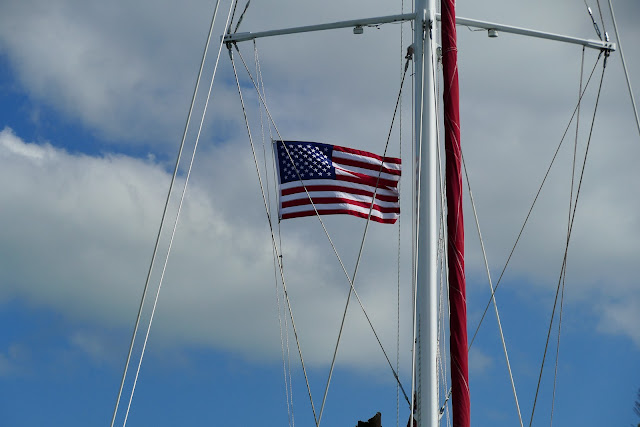 Walking the docks made me glad my home is well anchored and secure. Which is not say the wind didn't howl around the building all night and getting up before dawn was a trial today. A fifty degree morning with 30 mile an hour winds is crippling when you are used to finding 70 degrees a bit brisk. I jammed the zipper on my jacket with cold fingers and Rusty mocked my  fumbling by frolicking and dancing in the cold. 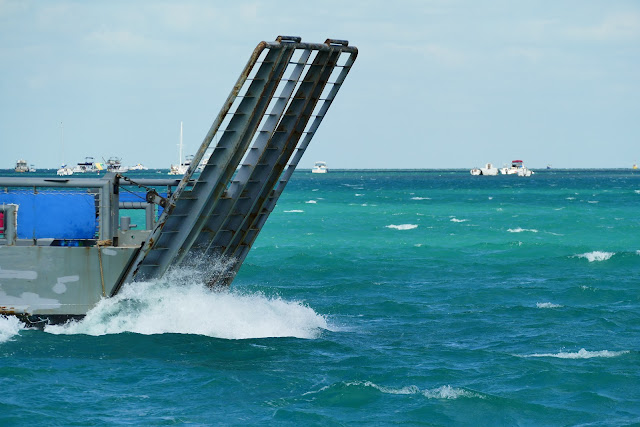 All this wild weather is a reminder as if I needed it that I need to get used to temperatures other than tropical if retirement is to be taken anywhere north of Lake Okeechobee...Last weekend at the RV show I looked around Tampa and it appeared wintry to me, bare trees, leaves on the ground and gray skies even if there was no frost. I saw it snow once in Tampa when I lived there around 1990. Stuff you don't see down here though rumor has it flakes were seen in Key West in the 1970s. Walking Rusty at 4 am was COLD even if frost and snow free. 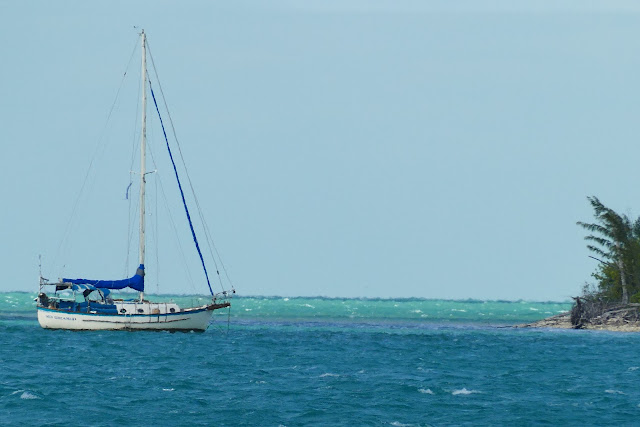 So you want the romance of living at anchor? Get used to plunging and rolling on a few cold nights. A wet ride to shore and an even wetter ride home at night is on the cards this week.  Not I would say, the time to be using a dinghy. 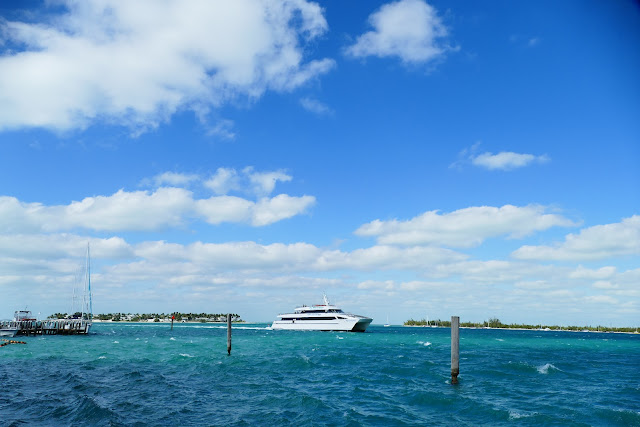 I have to note the Ft Myers ferry was moving through the harbor rather gingerly, though that may have been my cold infused imagination. I am guessing the ride down was wet and fast but the ride home in the evening against the wind would be something rather rougher heading into strong north winds. 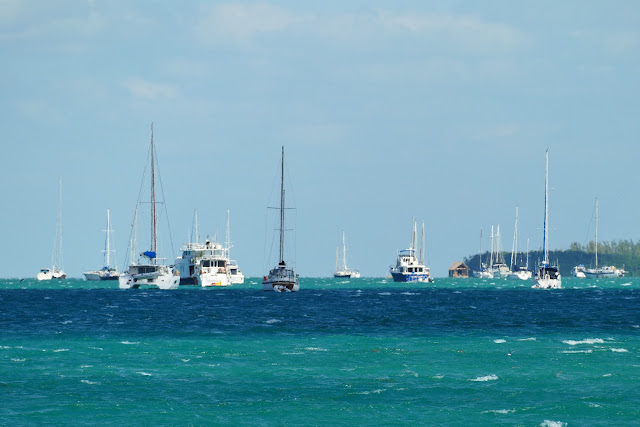 It was windy but not unpleasant under the sun on the fishing pier and boardwalk in front of the Galleon resort. 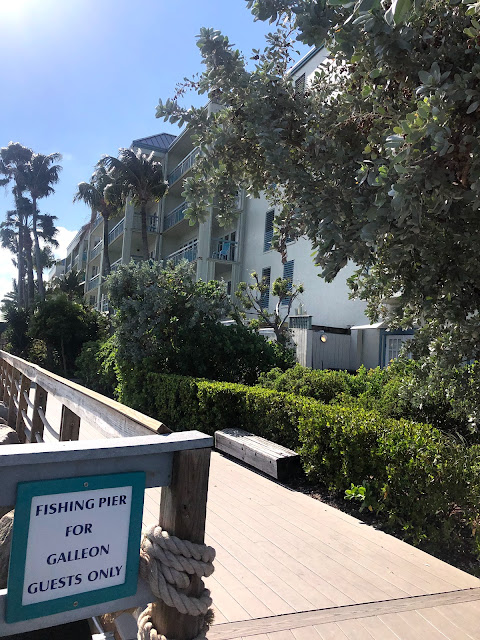 I tried to smile for a selfie in my windproof winter jacket. Its also pretty good against rain which happily I didn't need in this winter cold front. 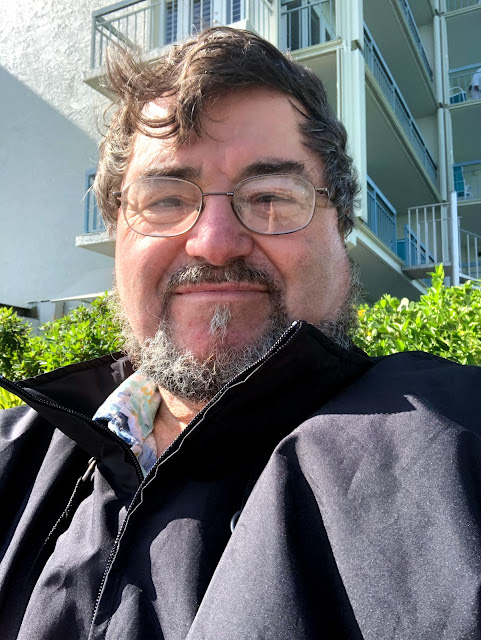 I love that it rains mostly, usually, in the summer around here. In a normal winter a quick shower is followed by sunshine after the clouds blow over. Not quite so cold would be nice. 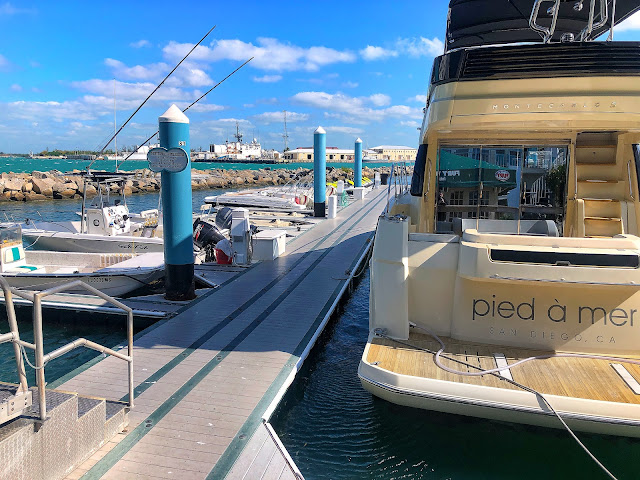 Looks lovely: feels cold. Sorry - it just does even if you are used to sub zero days. Enjoy your snow. I hate snow. And I'm not crazy about cold fronts if that wasn't obvious. Rusty loves them. 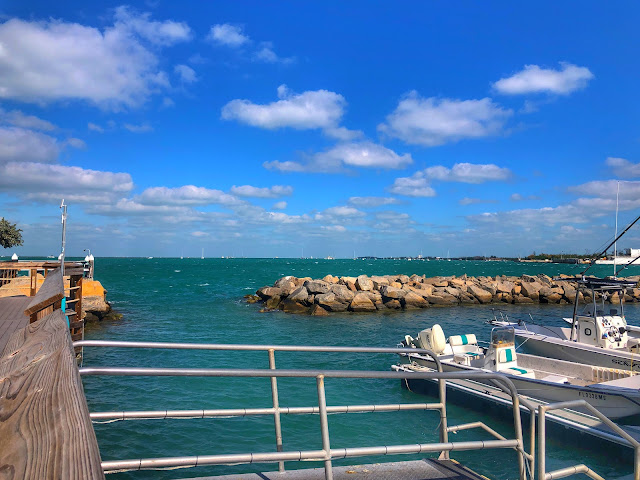