Permit me to be astonished but the work alongside Highway One never seems to end. They dig up alongside the road and put down pipes. Then they fill it all in and pave it and put down grass sod. Then we wait a while before they dig it all up again and bugger about in the mud a bit longer, then they abandon them mess for a while then they pave the bike path again and on it goes. Why? Beats me.
The county was given an immutable deadline by the state to get sewers put in across the Keys, which deadline has shifted a bit owing to a lack of funds to support the 200 million dollar project, nevertheless after two decades of dawdling things have got serious and every single home faces disrupted roadways as they relentlessly dig and spread gray mud and dust absolutely everywhere. Had they agreed to do them twenty years ago the money would have flowed like water but these days the State and Feds are not so much into financial largesse so its a matter of squeezing cash from a very reluctant Congressional turnip. Still the work goes on bit by bit, irritating delay followed by irritating traffic delay 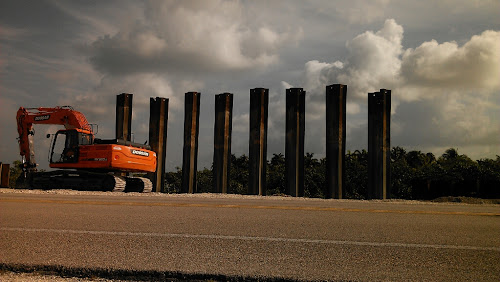 In these pictures we see the random placement of brightly colored earth movers along the Overseas Highway. At least they would move earth were they ever set in motion. They are busy building a seawall of some sort to sustain a sewer pipe they laid across the seabed across Niles Channel connecting Summerland Key to Ramrod Key. The idea is to put a pump station on Cudjoe Key and push all the effluent to a treatment plant so finally after decades of abuse the reef gets a reprieve and hopefully clearer water so the coral could thrive once again. Homeowners will end up amortizing the cost over 20 years with payments added to property taxes over that period. The cost per lot is supposed to be between 4500 and 7500 dollars depending on who you talk to. But the work must be done. 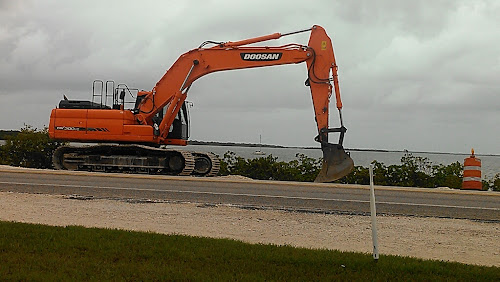 Cheyenne as usual managed to lead me astray on the simplest of walks. I stopped the car on the way home to get a picture of a disheveled sailboat I had wanted to photograph for some time. I hate seeing a boat with sails flopping and basically abandoned on the water. 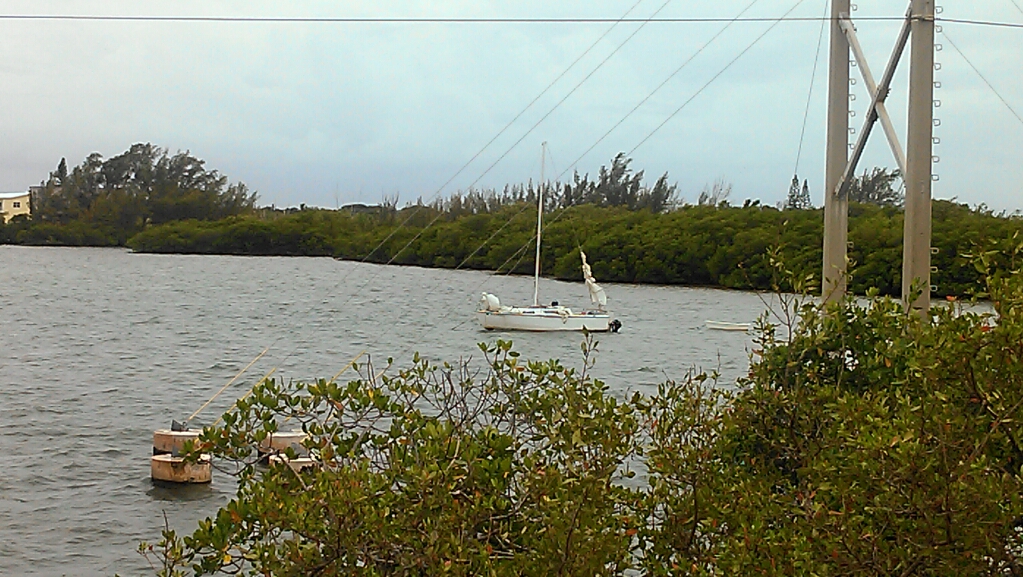 Meanwhile Cheyenne went wandering off into the bushes alongside Niles Channel to do some of her own inimitable exploring, perhaps chasing large land crabs, through as rule she couldn't care less about wildlife. In any event I followed her down the embankment and came across what seemed to me to be seawalls from an earlier era. Henry Flagler built the railroad here around 1910 and the State of Florida, in an act of public works that is inconceivable today bought the rail bed in 1938 after a hurricane knocked the system out of action, and thus created the tenuous overseas roadway. So who planted these vertical planks I couldn't say but they strongly resembled in smaller version the vertical steel planks being inserted into the ground nearby... 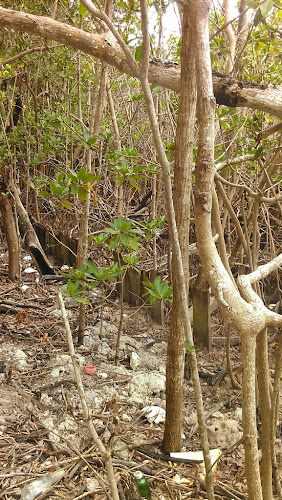 As one more sign of modern decay the old Flagler bridge rebuilt apparently in 1943 during the war when the military needed to spend money for the War Effort, is being allowed to tumble into decay. Sad but inevitable. Quite a few of these bridges have been saved and some are part of the Heritage Bike Trail. Not this section which was split in the middle to allow taller boats under the modern 40-foot Niles Channel Bridge. Slow decay is our future if we are on the sidelines. 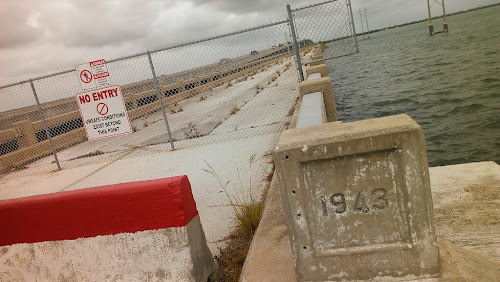 The good news is that decay is not part of the plan for those bits of our infrastructure that we are actually using. Flagler's bridges may be slipping away here and there but all this sewage madness, long overdue, is a project that is, one hopes, going to give the reef a chance. Every time I squeeze by more of those bloody orange barrels, the people with gulags, the dust that cakes my car, I remember what it's for, the biggest environmental project of my lifetime. Too bad the seas are acidifying and rising, but my waste will no longer be a part of the problem, and that has to count for something, I hope.