By  way of preface I should relate a conversation I had, the unwitting victim as I was of a motorcyclist encountered at a gas station in Virginia on my recent trip up the Eastern Seaboard. I was letting Cheyenne stretch her legs a little after I secured the pump nozzle in the car's tank and  strolling around the building I came across a battered orange Harley Sportster. Most obvious were the deep dents in the tank, but closer observation showed a non standard front fender, crusty rusty scratches in the chrome of the headlamp shell, and various minor signs of a not terribly recent crash. The owner came by, dressed in a leather vest, shorty helmet and flashy boots and without preamble launched into a very long winded story about the errant young man  in a car who crossed lanes and crunched the Harley head on, such that the rider flew through the air and had his limbs and innards rearranged requiring massive prolonged surgery to pull his legs out of his torso and set his liver, kidneys, stomach and lungs in their proper places. At a bill of 1.3 million dollars. "His insurance covered you no doubt," I butted into the endless monologue with my usual health care preoccupation. " Oh no, " he replied cheerfully, "He had the bare minimum coverage and my VA paperwork got lost and I ended up with a million dollar bill." He smiled cheerfully like a man who was ignoring the bill and had not yet filed for bankruptcy, as one does in this sad state of affairs. "But the good news is," he added looking skywards forced to take his penetrating eyes off mine for the first time in this  lengthy narrative (that I have much abbreviated though it may not seem so), "...I found my heavenly Father," he smiled beatifically. "I am an atheist, " I said stoutly, "and a devout believer in single payer health care. As it is my insurance is paying your bill," I was merciless. "We aren't a socialist nation," he said after he recovered from my blind side, with an unsaid nod toward my Euro-accent, land of the infidel socialist single payers... "Fair enough," I said, "but that only works if the monopolistic corporations decide to honor their obligations and pay what they owe and not hire people to deny claims of the sick and injured." I tried to break it off but he kept blathering as I shoved Cheyenne in the car and  inserted myself behind the wheel. The freeway beckoned, as this "quick stop" had turned into an interminable lecture, an attempt at proselytizing and an utter waste of my time and breath. That's why I hate engaging strangers in small talk, things always seem to get away from me and I know better and I am left with jangled nerves. It was only when he turned back, finally, to his Sportster did I see the Christian Riders logo on the back. Every time a Christian tries to convert me I love Judaism more. Jews don't believe in missionary work and prefer to keep their religion to themselves. Good people. 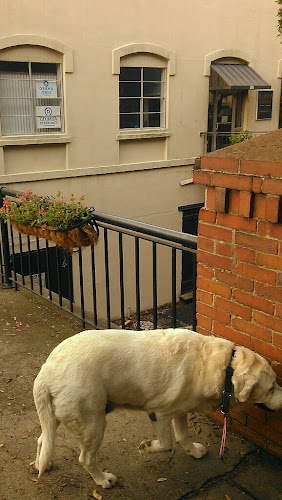 I found an extraordinary level of interest in my dog when strolling River Street in Savannah last Wednesday evening. People, strangers all obviously, came up to Cheyenne unsolicited and petted her and made a fuss of her and treated her like the princess she usually is only in my eyes. She took it all in stride, pausing when I got stuck talking to a few of those strangers. "Come on Daddy, lots to see!" was the theme of the evening.

One man came up to me, petted my dog and asked about her. "You're not from Key West," he said in that patronizing way people have, thinking they are being witty, not realizing how many times I've heard that stupid witticism. "No," I said, "I'm from the place where your ancestors emigrated from..? Where your aunt lives..? ..Where you were stationed in the military..?" I had exhausted my list of reasons why perfect strangers feel free to ask me about the source of my non Key West accent. He smiled. "English wife," he said. "So you are from Savannah," I riposted trying to nail down his provenance and get the subject off mine. I hate explaining I'm Italian who went to school in England of mixed parentage, unknown father etc... etc... and yes I speak Italian. Phew, it's a long story.
"She died," he said, "But she liked Savannah so I think of it as home..." From this unpromising start we had a wildly fun conversation. Surprise! 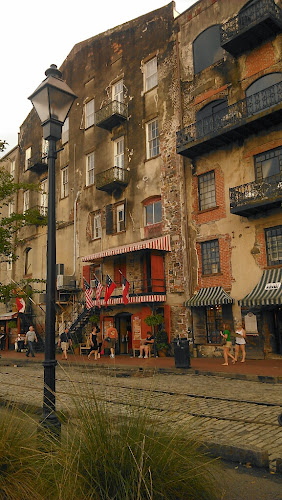 I failed of course to take a picture of the middle aged white man who engaged me in conversation, taller than me, mild mannered and with a cheerful smile. He said his second wife was South African, which got us going on accents, as I tried to do my version of a dour Afrikaner and he laughed at my successful mimicry. Then we agreed that Dutch and by extension Afrikaans were ugly glottal languages. Cheyenne was quite bored but it was my turn to sniff the gutter, as it were, and have fun. We discussed the variations between South Africa and Australasia and he remarked how, when working in Holland and Britain he had never been able to tell the difference between a New Zealander and and Australian. I by turn admitted to him my  bigotry... I find Australian accents hard not to imitate, partly because of their absurdly wide vowels but partly also because they have an odd tendency to abbreviate everything and all abbreviations end in a 'y'. We parted famous friends and my dog got to walk again. 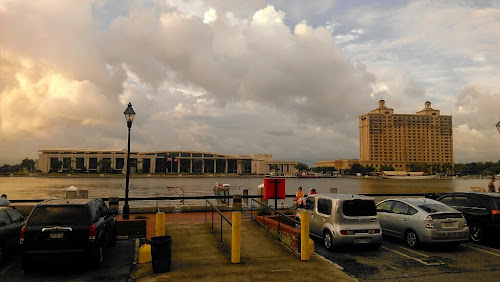 Not for long as we were waylaid by a remarkably toothless little old woman, who in all likelihood, had she had a roof, nourishment and a less arduous life might well have looked younger than her likely age. As it was she sold palm weavings on River Street and she inveigled my dog into stopping so of course I ended up  listening to her patter about the rose as symbol of peace etc...which must be true because Cheyenne seemed to enjoy it, looking up at the sun weathered parchment-like face and the mobile, toothless mouth puckered like an invertebrate poised above her bright blue sweater. I have no idea what my dog was thinking but I forked over  some bills for a nicely garnished palm rose which I promptly  forgot in my motel room that night. Grrr... 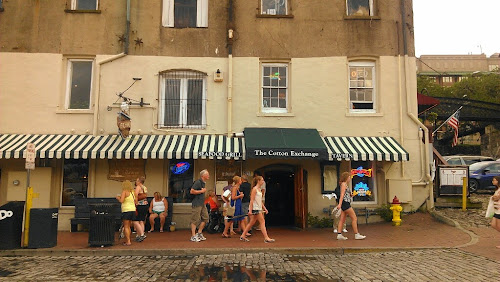 The last stop was perhaps the oddest of all, walking along the edge of the riverfront admiring the view a young African American man came up as though importuning "Sir!" for some predictable thing or change or something. But no! Once again my elderly yellow dog, so often the object of abject fear was desired... "Can I pet your dog?" he asked with a  big grin on his street musician's face. Sure, I replied, though she's not really interested. Happily he paid no attention to me and to my astonishment Cheyenne, the blissfully uninterested dog that heeds no one or no other animal fell immediately and completely under his spell. As he ran his hands gently over her head down her neck and across her back she stood obediently as I have never seen her do with a stranger and let him touch her as he wished. He must have seem my astonishment as he smiled and told me they call him -predictably- a "dog whisperer." He deserves the title as Cheyenne was his for a few minutes, trapped under the spell cast  by his hands. Once again I was too astonished to remember to take a picture...and soon enough he was gone back into the crowd with a smile and a wave, content to have touched my old yellow Labrador. 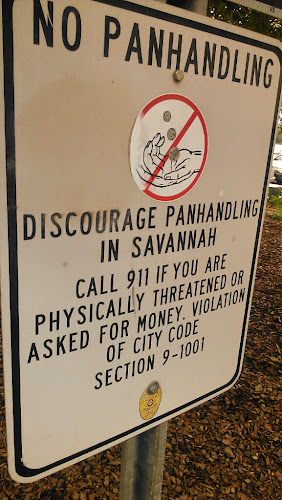 That was particularly odd because there is some cultural deficit among blacks in North America where dogs, particularly large ones are to be feared above all. I don't know if it is a myth passed down the generations based in the cruelties of history where humans have used dogs to enforce human cruelties or what. Also it was odd as Cheyenne never lets anyone touch her. But there it was, and I saw it happen. 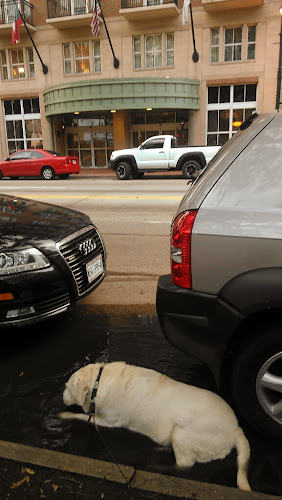 Cheyenne's  grand finale after so many friendly encounters in a place where it seems every single person wanted to pet her, and not all of them were dog whisperers by any means, after we returned to Bay Street towards the car she caught me unawares and plunked herself down in a large puddle in front of God and everybody and proceeded to wallow and drink her own bath water to the astonishment of passers by who crowded to photograph the hippopotamus-dog. Now that's the Cheyenne I know and love!