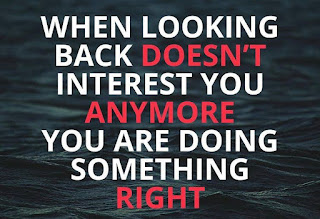 It is a Sunday in the height of the winter tourist season. Highway One is packed and Key West is busy, and in a couple of weeks my wife will be fully vaccinated. I hardly dare say it out loud but we are thinking about taking an evening out. Masks, caution and all, but yes, an evening out. I feel slightly apprehensive and not a little surprised. Wearing a mask and staying distant are the new normal. 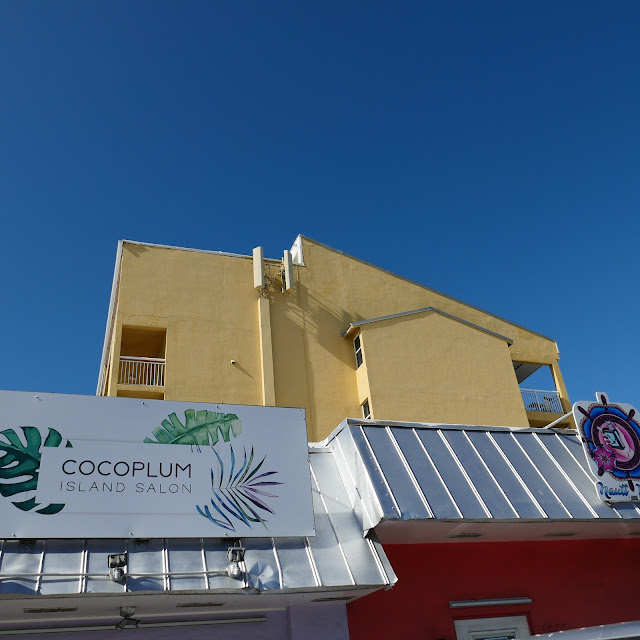 It's odd how humans adapt to normal. That tired old story about heating water up slowly to boil an unsuspecting frog is not actually true according to scientists who've tried according to James Fallows in a slightly dated 2006 opinion piece in The Atlantic magazine. However what does seem to be true is that if we are required to live with a  previously unimaginable inconvenience we can get used to it. I wear  a mask reflexively nowadays and when eventually it may become no longer necessary I shall feel slightly odd. 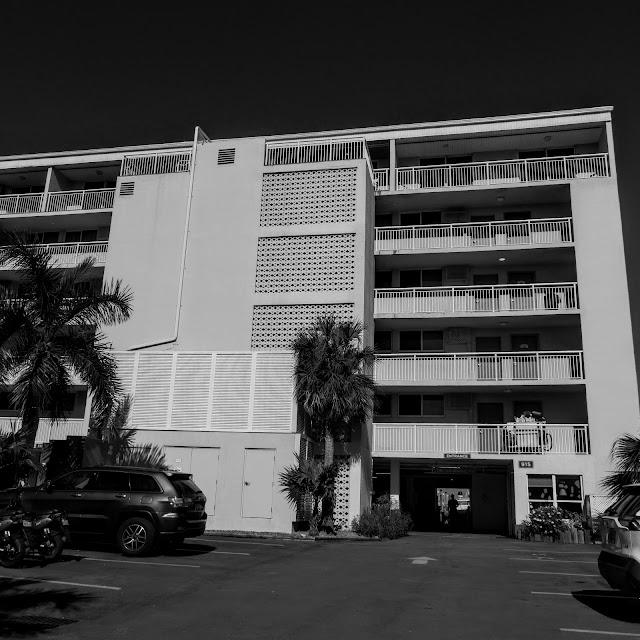 People call me at work demanding to know by what authority Key West requires outdoor masks and these Facebook lawyers want to engage with me in arguing the validity of the rules. They are finding out what lesser mortals have known since the beginning of time: you can contest the rules but even if you are right you may end up spending money and time to prove it. None of these Facebook lawyers seem ready to be the Rosa Parks of the anti face mask movement. They just like to argue with me, a mere civilian with no authority over anything about mask wearing and who is not going to joust about the rule making decisions of city management. 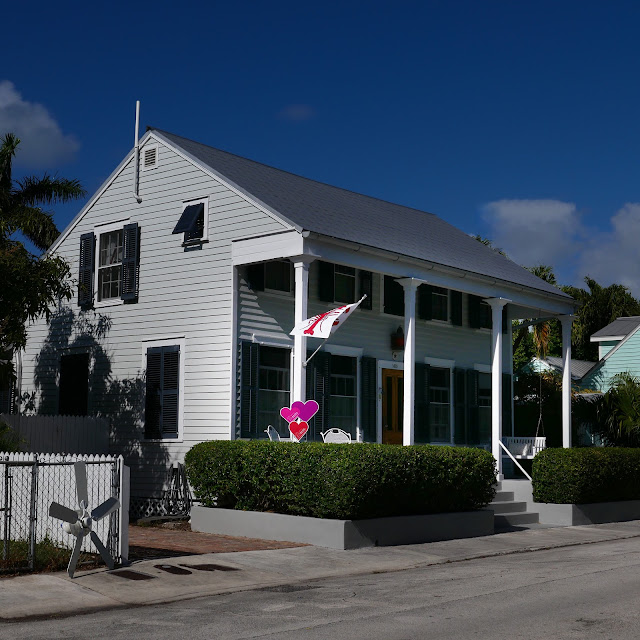 I cannot wait for masks to be history.  Next I propose we take to Facebook and argue that stores cannot require us to wear shirts. I can think of nothing more important for the Supreme Court to get tangled up in. I demand to see nipples while shopping. I mean really, people who could even be your neighbors are very peculiar;  they don't mind the chance of spreading infection to make a political point as stupid as my fictional demand to indulge in shirtless shopping. I like the fact my retirement home has wheels to allow me to move to a safe distance as needed. I don't really want to be given Covid by my neighbors, not even were it in a  sound political cause which it isn't. 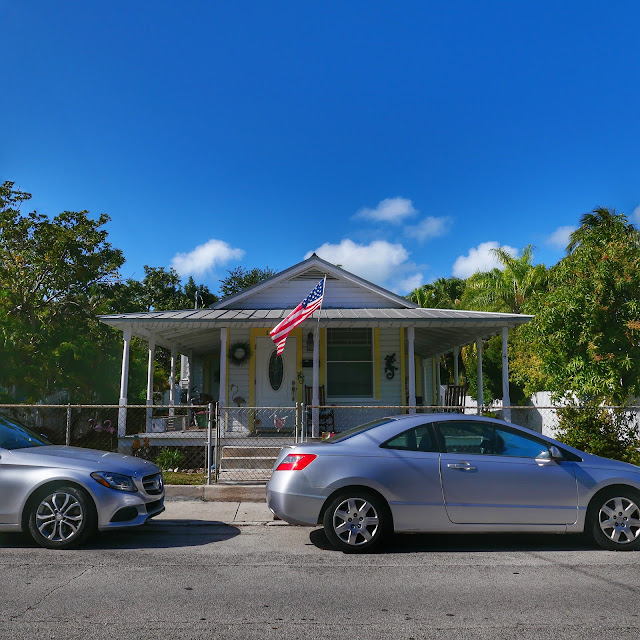 When I was a youngster I craved a motorcycle like this elderly BMW, the touring monster of the 1970s and 80s. They still make a version of the air cooled flat twin, though much more sophisticated, heavy and yet perhaps relatively speaking not so much more expensive. It was too much money for twenty year old me and most likely it was not a chick magnet which matters at that age, though I was always of a more practical bent seeking to complete journeys with no mechanical troubles as a priority over even dating. Looking at the machine parked in the Meadows in Key West I was reminded of many journeys undertaken in my youth on unsuitable, but affordable, motorcycles. 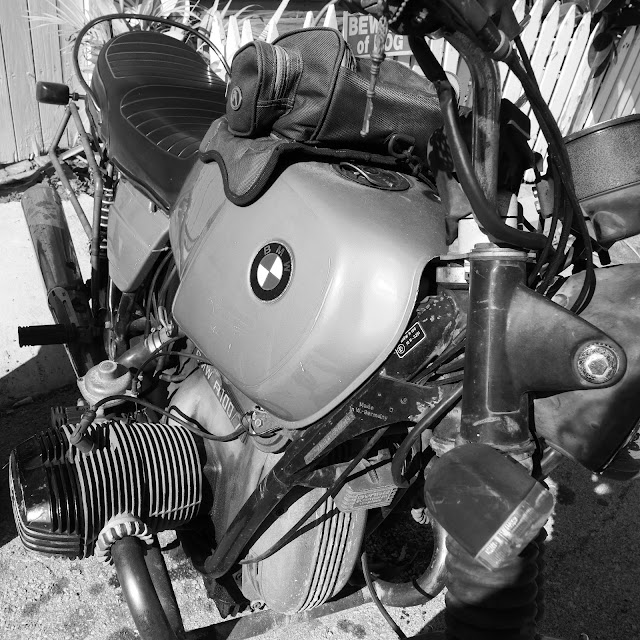 I brought my last remaining motorized two wheeler to Key West on Friday, a 17 year old Vespa 150 which we've owned since almost new when the previous owner lost her nerve after 200 miles and put it up for sale not a mile from where we live now. When my wife advertised it on Facebook she got an avalanche of offers much to my surprise. 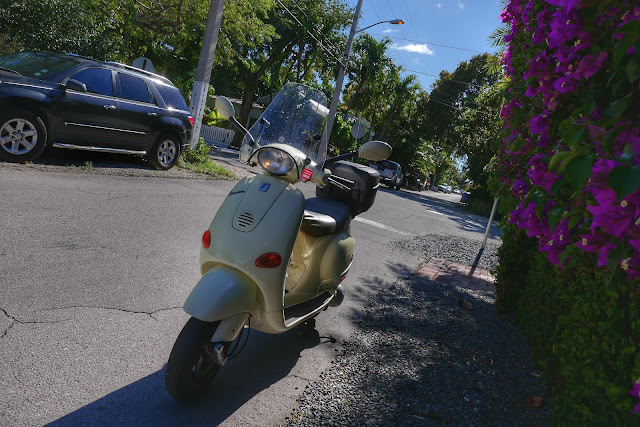 I quite enjoyed my final 23 mile ride in the afternoon sun, keeping up with traffic on Highway One, thinking about journeys past. My wife who was following  a few miles behind in the car, was, she told me, freaking out the whole way. The only ride she could think about was my near fatal crash in 2018. She was glad when I parked the Vespa at work and got in the car with her. I'm supposed to meet the buyer tomorrow or Wednesday to sign away the title at the Tax Collector's office. And that will close the motorcycle chapter of my life which started when I was 12. 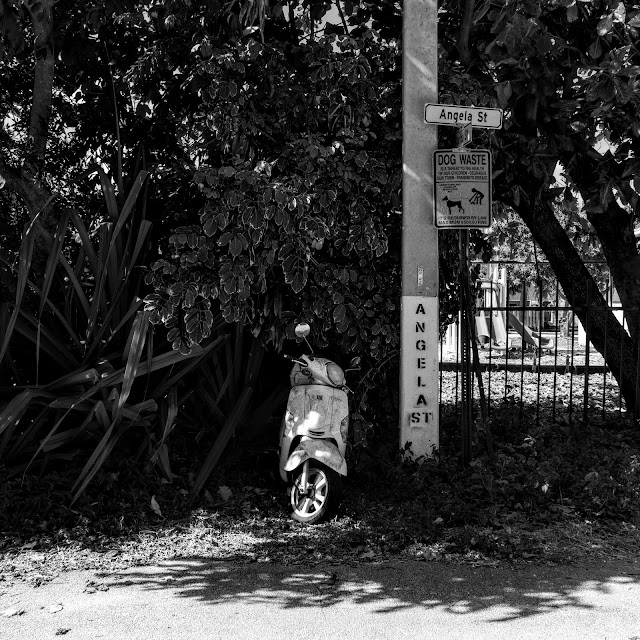 I may buy an old age motorcycle when we finish traveling but this will be the first time since 1971 that I will be motorcycle free with intent to stay that way. Oddly enough I feel fine with the choice. The van is even less sexy than an elderly practical BMW motorcycle but I can tell you unequivocally it's a lot easier to park and sleep with a van than it is grubbing around in inconspicuous bushes with a motorcycle. I think it's true that in old age you seek comfort more than you do as a youth. I certainly do. 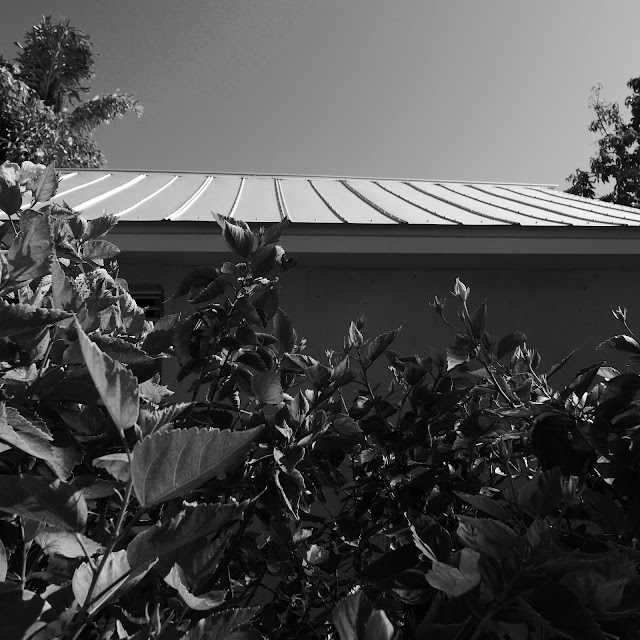 We spent Friday evening emptying the van, putting foods and clothes and camping gear upstairs in the air conditioned house. The idea is to prevent mold and to allow the van to circulate air inside the vehicle during the hot summer months. We are so understaffed at work this year I am doubting I will get a three week vacation but if we do get time away we shall simply restock for each trip. We have a pretty good idea by now how to load the van for long term living but taking stuff out gives as un opportunity to re-evaluate exactly what might be worth not taking with us. One of the great things about change is the opportunity it forces on you to think about what you own and why. We are jettisoning stuff like a dirigible dumping weight trying to stay aloft. It feels good and it makes the journey feel closer. No more motorcycles, for now. 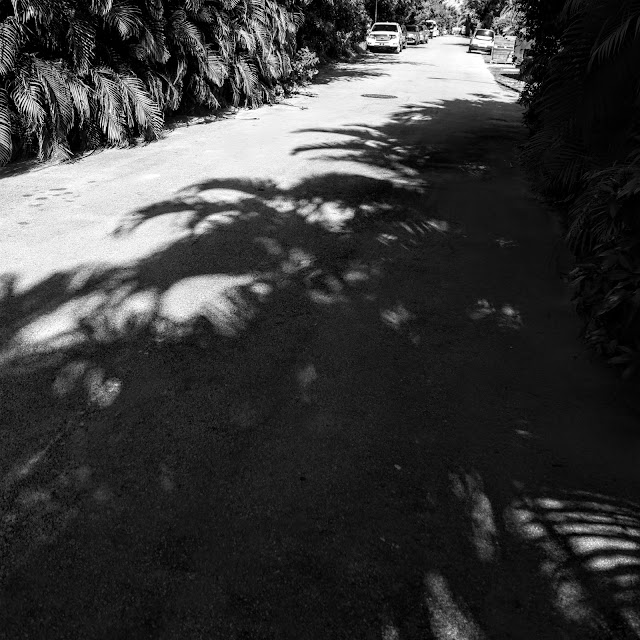