Fog is not unknown in the Florida Keys, land of perpetual sunshine. But, like the occasional winter cold snap it is rare enough to cause comment. As a general rule I am not fond of fog. It combines the worst meteorological elements all into one. It's cold wet and it mutes sound and destroys visibility and if you're on the water or on the road it makes the simplest journey disorienting and at worst dangerous. I have no appreciation for its artistic enhancements of daily life. 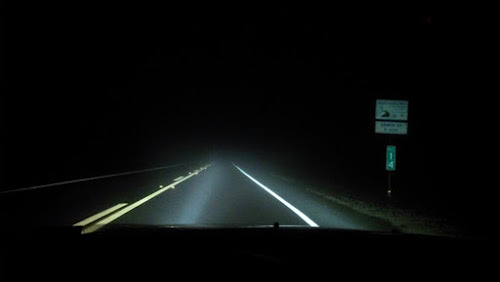 Actually I have some night time pictures of Old a Town I will post later and as reluctant as I am to write it, the fog does look...interesting. But on my way home in the middle of the night driving home from a short shift the fog was surprisingly thick and impenetrable. I was in the car because Cheyenne wanted to come into town with me so I let her wait in the car, not her favorite place, while I worked. 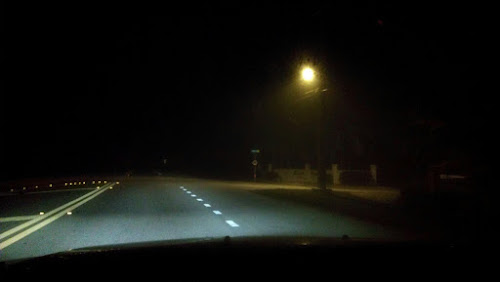 By the time my Labrador got her reward, an hour long walk through Old Town, I was ready for bed none of which drowsiness helped me on the twenty mile drive home. I don't think the photographs display adequately the utter darkness surrounding the outer edges of the wall of white cotton wool that lay just out of reach of the head and fog lights on the Fusion. I was reminded of driving home after Hurricane Wilma wrecked Key West in 2005. 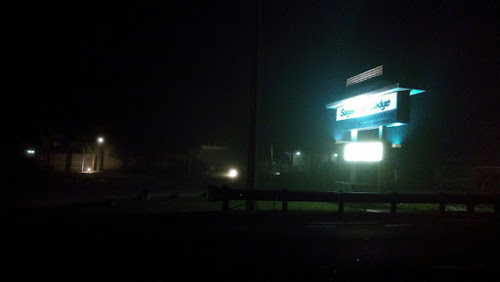 I half expected to see wrecked boats driven onto the road by the storm and abandoned on their sides by the retreating waters, left on the highway in the dark like beached whales. Instead this time around the road was clear except for a few cars who drove like maniacs. Believe me when I tell you I crawled home, well under the speed limit, mesmerized by the curtain always in front always out of reach. My speed would increase gradually to a maniacal fifty miles an hour when I would come out of my trance and quickly slow down. One of the axioms of safe riding is to only go as fast as you can see. Last night I could see 35 miles per hour. Others apparently had x-ray vision for of the few cars I saw in either direction all were traveling at normal speeds. I pulled over several times to let them go (a courtesy I wish would be reciprocated to me but never is) and was astonished none of them wrecked. 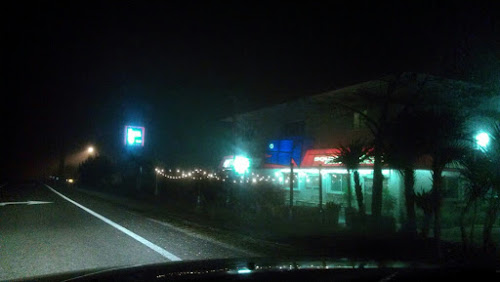 During the day this bizarre fog makes the Keys look like a California summer day. The cloud hangs low over the water, the penetrates it here and there and the air is crisp and unnaturally cold. All I can think of is standing on the cliffs in Santa Cruz looking out over the roiling Pacific Ocean and wishing I were in a warm place. Fog changes everything, and not for the better, no matter how artistic I think I may want to be. Fog sucks.

Posted with Blogsy
Posted by Conchscooter at 11:33 AM 2 comments: