A lot of people our age are dealing with the vicissitudes of aging parents, but neither my wife nor I have living parents. Indeed I never knew any of my grandparents and being child free our place in the constellation of generations is a bit murky sometimes. Bernice Belton died in Santa Cruz a few weeks back at the age of 87 and she was as much a godmother to my wife as anyone formerly living. The memorial service was set last week and thus it was we flew by commercial airliner, my least favorite form of travel from Fort Lauderdale to San Francisco. Saturday afternoon found us immersed in renewing old friendships. Barbara, our former realtor. 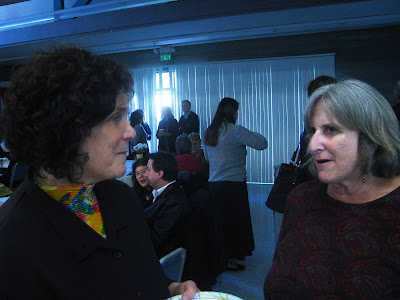 Mitchell my wife's boss grinning at me from across the room. He leads the contract public defender office where my wife worked for years. My wife told him she needed a sabbatical a dozen years ago and sailed off with me to Panama. From a pay phone in Costa Rica my wife called Mitchell and he said,"So when are you coming back?" A burden of law lifted from my wife's shoulders as we strolled back to the dinghy pulled up on the shore of the Gulf of Nicoya and we resumed our journey sailing to Key West. 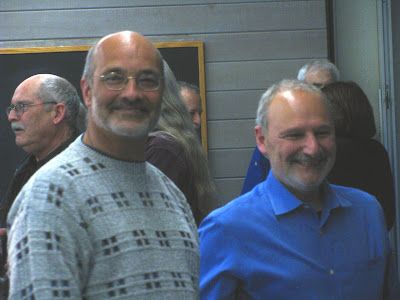 Michael in the blue shirt is another in the coterie of Santa Cruz lawyers we spent some considerable time reminiscing with during the preamble to the service. Mary, below, another lawyer... 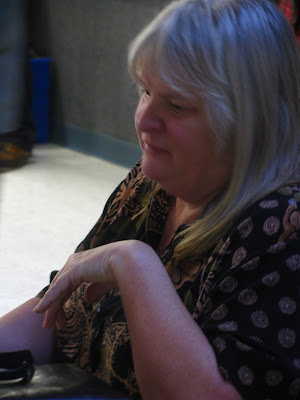 ...and the object of the gathering, now available only by photograph as she is nothing more than ashes and memories at this point. 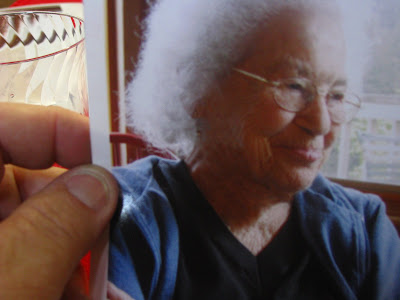 The master of ceremonies Jess Brown was emblematic of Bernice's wild life. Herself a dedicated leftist of the old school and gentle Jess the head of the Santa Cruz County Farm Bureau, a Republican and Bernice's constant helper. Odd but true, in a world always more polarized. 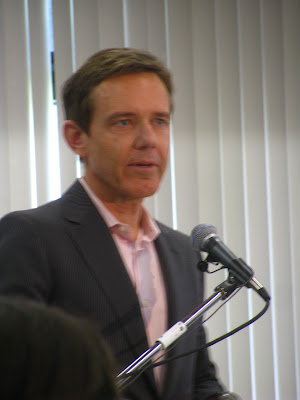 Pete, and his wife Amanda sitting at our table because Pete was on our catamaran when we sailed away from Santa Cruz all those years ago. 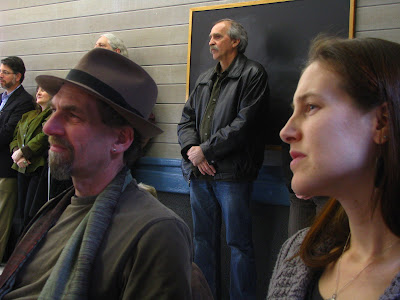 Frankie fresh from New York telling lies about their early years together in the Big Apple, remembering Bernice's first husband Irv and putting together the pieces for her California acquaintances who may never have heard the stories from the master story teller herself. Bernice always claimed to feel exiled from New York City. 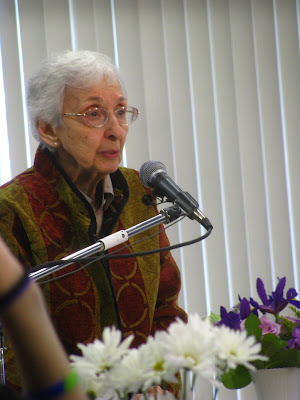 Annie with more stories. The generations past always get my attention because I am a firm believer that without knowledge of history the present makes no sense. 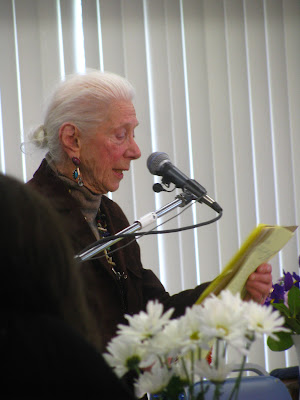 Julie, of my wife's generation telling stories about early life in Santa Cruz where the relatively young university hired people at random it seemed to fill positions. Bernice worked with students as an advisor for a while and as she used to tell it she learned more from them than they ever learned from her. Paperwork was not her strong suit. 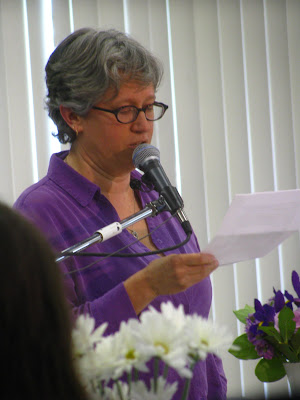 The formal part of the memorial was interrupted by a recreation of Bernice's favorite past time: politics. Former Mayor Jane Weed presided over a mock council meeting and invited public comment. Mike Rotkin another former mayor and socialist-feminist powerhouse of the 70's and 80's and still on the city council today was also at the table. 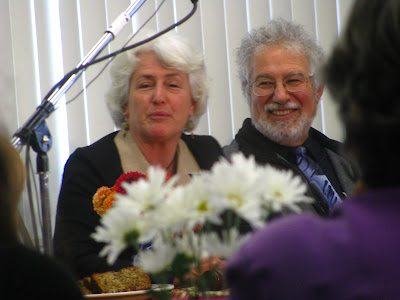 My wife pushed me to speak and I said a few impromptu words about my time reporting on daily life in Santa Cruz and the also the encouragement Bernice gave my wife to leave her home town and make a new life in the Keys. 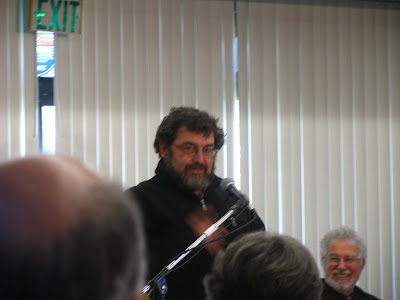 Bernice also had arthritis and appreciated the milder climate for my wife's disease. Bernice was no cook and much was made of her lack of skill in that area. My wife tells the story of how Bernice invited us to her home for one thanksgiving and promptly called back to remind my wife that she it was who would cook the turkey for Bernice after we accepted the invitation. One comment about carbon dating Bernice's spice rack brought a round of laughter. Her banana bread recipe was not to joked with though. 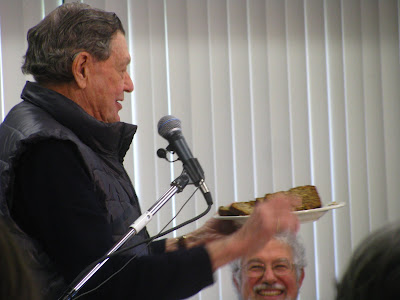 Indeed there was a copy of the immortal recipe included with the program. 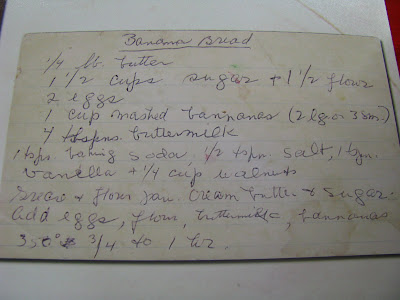 David Winters a noted local musician offered his own tribute, a rendering of the Internationale,. Billy Bragg says it is only appropriate for certain occasions and he's right. This was one of them. 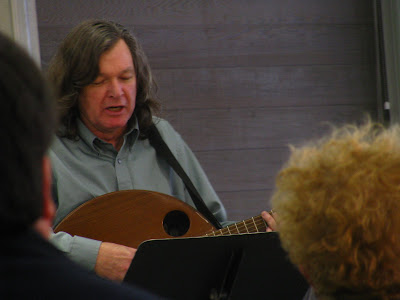 The event was recorded for community TV, though many of the public figures of Bernice's generation were not present. Time passes and memories fade. "Stand up all you victims of oppression..." 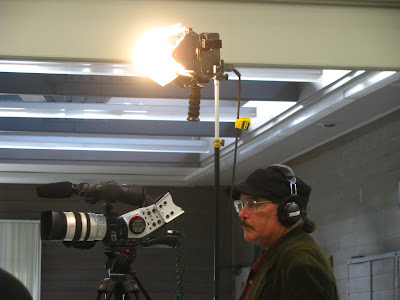 State Assemblymember Bill Monning was on hand. One of the good guys in Sacramento. 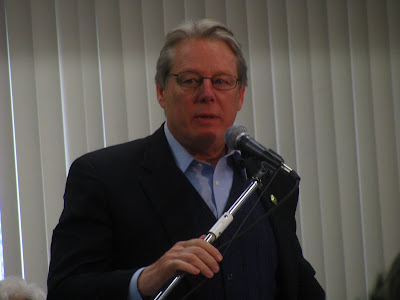 The left in Santa Cruz had got upset with Mike Rotkin on the city council. I wanted a chance to talk to him because I remember him well but that didn't happen. 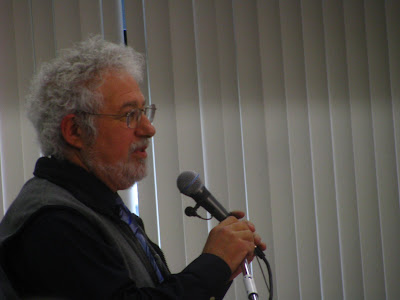 Pete was watching it all. 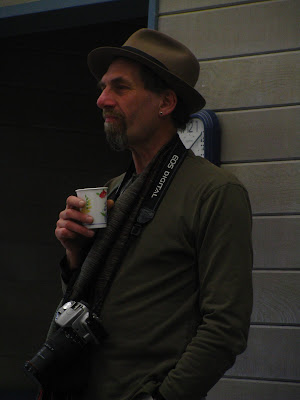 Sara offered her memories of Bernice as the program resumed. 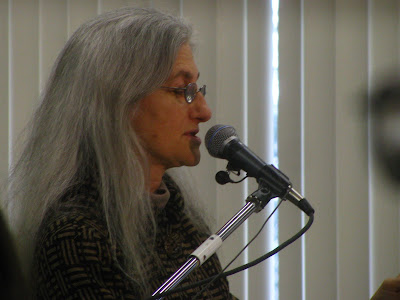 Bernice touched a great many people. 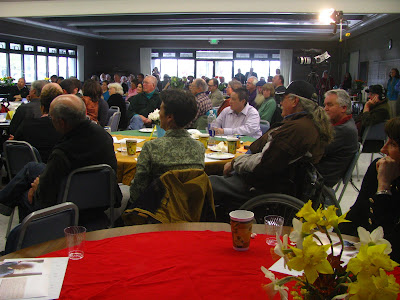 Her niece Linda from Texas gave a speech that cracked everyone up. The dry southern sense of humor was refreshing. 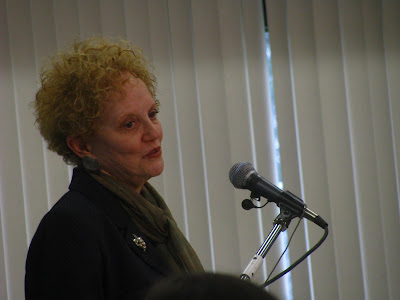 And finally the daughters, Nora (glasses) and Donnie. 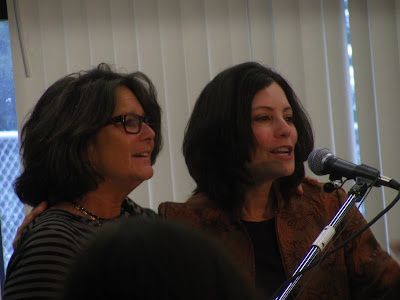 A final song from Cliff and Sara... 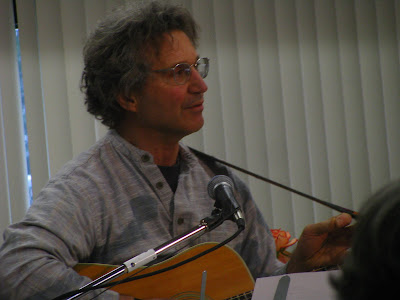 ... and a chance to catch up before splitting. 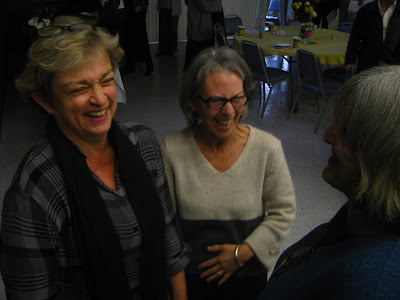 We decided dinner could be a tribute to Bernice at her favorite (Chinese) eatery and Barbara and Marty and their daughter agreed so off we went. 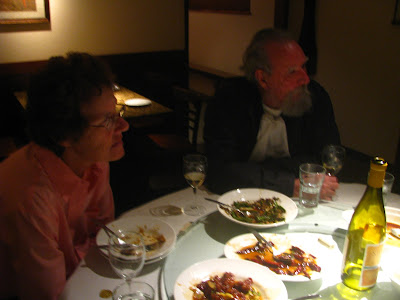 Omei makes a mean Lemon Chicken, Bernice's favorite, a dish that only I usually enjoy apparently. I got to have it one more time that night. 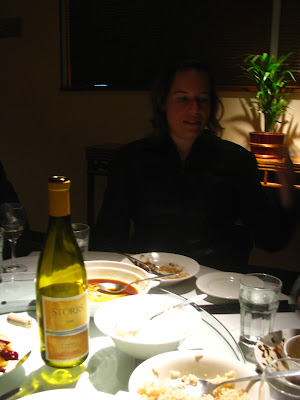 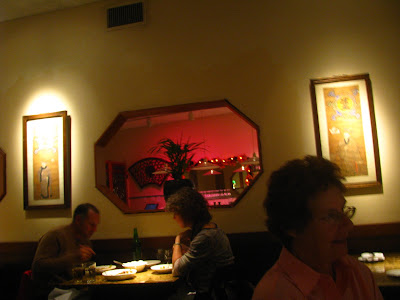 ...and we split one more time. Layne and I closed the evening in high excitement in the local Publix, er, Safeway. A mega-supermarket with endless aisles of consumables. Including sophisticated Italian scooter....coffee? 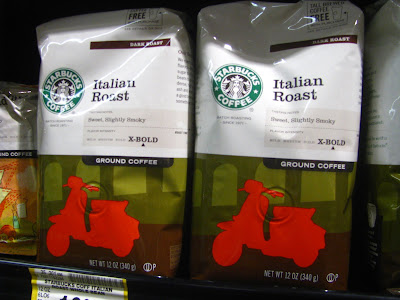 The place was vast and thus vastly entertaining for people like us used to the more modest proportions of Searstown. 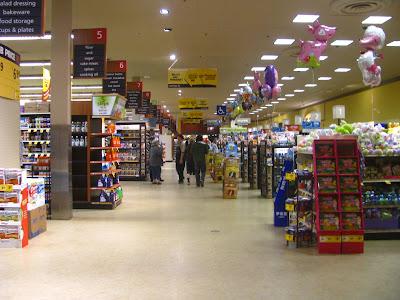 Somehow it is all entertaining when one is on the road.
Posted by Conchscooter at 12:01 AM 4 comments: Links to this post