I grant you there is something romantic about taking a break from driving by riding a boat and yet despite being stationary still making progress toward your destination. There is however nothing romantic about being jangled awake at four in the morning by your alarm clock which is reminding you the ferry is three and a half hours away and you have to confirm your arrival by 8:15 for the sailing a half hour later. Cheyenne was puzzled to be out walking in the darkness but did her best and filled a plastic bag for me. 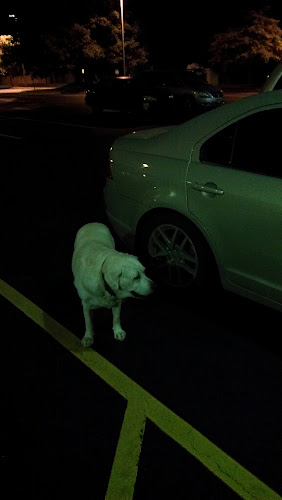 She took her place in the Ford, on the princess bench in the back, while we loaded the trunk. To my astonishment we left on time at 4:32 am and found ourselves on the Chesapeake Bay Bridge Tunnel which looks like a misspelling but is in fact an endless chain of bridges and tunnels, one after the other, Chesapeake Bay Bridge-Tunnel Homepage. 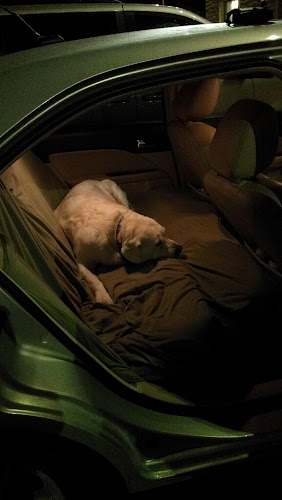 Of course at that hour of the morning, by now close to five they were busy making repairs before the commute clogged stuff up so we got clogged instead. Which started my wife fretting about the time. We had promised Phillip and Van the joy of our company in Boston Monday night for dinner and that appointment overshadowed the rest of the day. 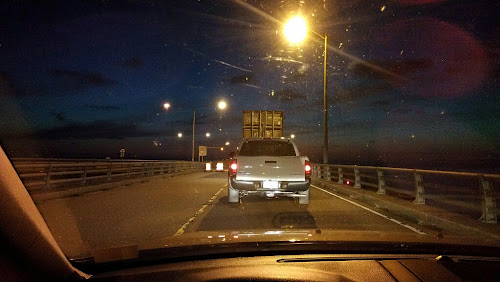 The sunrise was extraordinary, the usual pink and orange hues in the sky, but the ground was still in darkness so the the contours of the land, and the huge mysteriously dark trees gave the approach of day a mysterious quality that I don't get in the Keys where everything is so flat and the trees are so small that nothing is hidden. 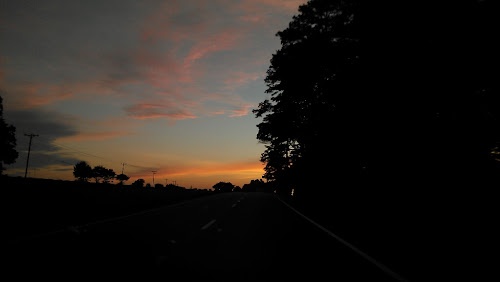 And the ground fog, that was something. 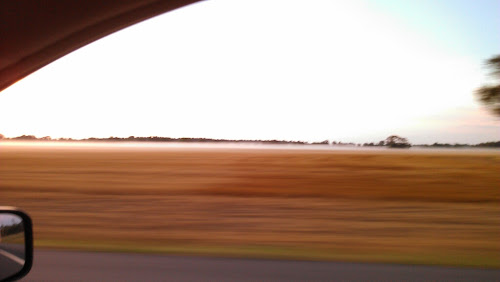 The temperature was in the mid sixties and the night had produced a veil of white mist so insubstantial it vanished as we approached at sixty miles an hour but from a distance it looked as solid as a brick wall. 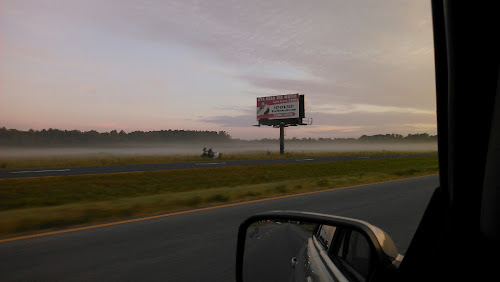 All too soon the night became day, cars peeled out of driveways and we were in traffic again. Apparently Delaware is a no helmet law state which makes it rare among the rigid societies of the Northeast. He was riding and I wasn't. Grr. 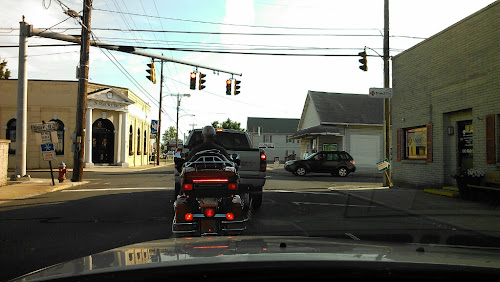 The thing about lining up for ferries when you have a dog, and I've done this a few times now, is that you have to take your dog for a walk as you wait and she has to take a last minute shit under the unwavering gaze of hundreds of otherwise bored passengers. I was hoping that her early morning walk back at the hotel might have done the trick, but from her ample recesses she managed to locate one more giant effort. So there I was like an unwilling participant in some minor modern one act play stooping and scraping with my confounded plastic bag wishing a fight might break out or some other distraction might attract the audience's rapt attention. 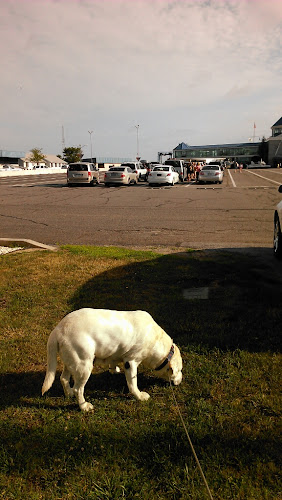 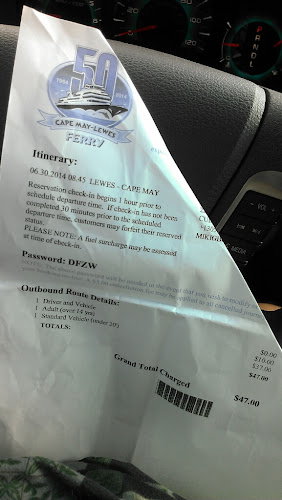 On board as Cheyenne and I maneuvered to the stairs I noticed a rather clever trick, obvious when you think about it for hauling bicycles. 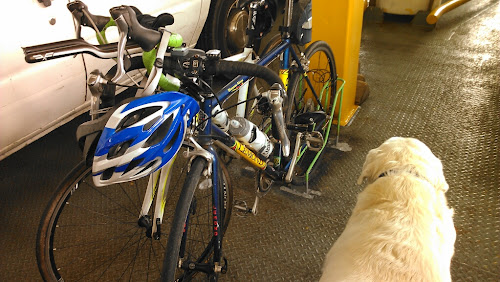 Labradors and other minor dogs are only allowed on the outside deck which must be a trial in January but in summer it was delightful. 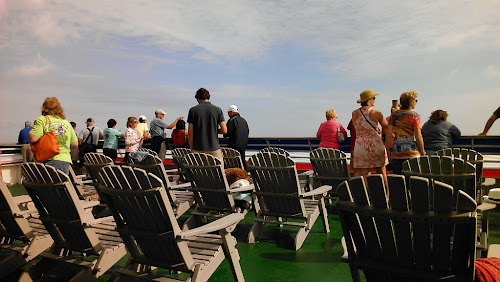 Cheyenne liked the steel decking and sat close to watch the world go by from the safety of my aura. Good dog. 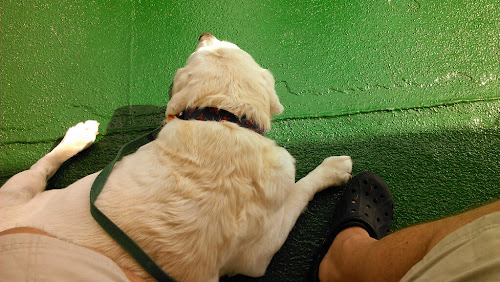 We wandered around a bit though she was not impressed by the amount of water outside the boat and proceeded to ignore it for the rest of the 90 minute trip. A very pleasant couple with a small dog sat next to us and engaged in canine conversation (curses, I thought at first, Cheyenne you will pay for this intrusion!) but they turned out to be very cheerful Floridians living in Pittsburg to deal with family matters. Cheyenne was forgiven and we passed a pleasant thirty minutes. 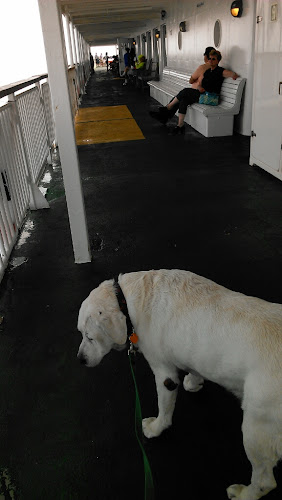 I guess the Cape May - Lewes Ferry is quite a public service and cultural institution. Who knew? 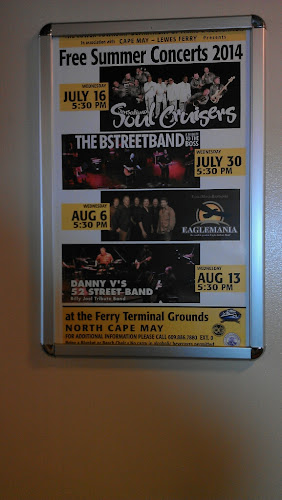 Then I went hunting for the loo and unhappily things took a rather dark turn. I couldn't find any sign of a toilet anywhere and was ready to take a discreet leak in One of several life jacket lockers, which in my defense looked remarkably like porta potties, but I was saved at the last minute when I stumbled across the blessed room. Hmm, I said to myself, I'm surprised they don't have urinals, perhaps to allow for rough crossings in winter weather but I've never seen that on any boat. I took a stall and amused myself by photographing the sign. On my boat I used to tell guests that you could only put something in the bowl after you'd eaten it which produced some grimaces on the guests' appalled faces until the penny dropped. 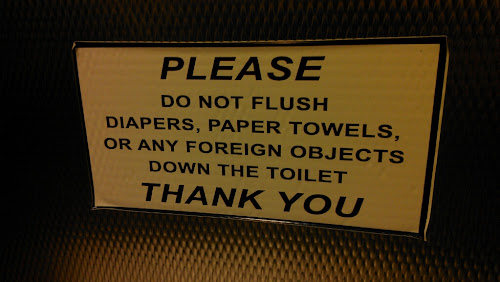 After the inside of the stall lost its charm I went to wash my hands as one does, rinse, hum-de-dum, soap, old macdonald had a farm, hum-de-dum, rinse, hum-de-dum, paper...ooh, silly woman what are you doing in here? I thought and she did too as she made a rapid u-turn and left looking embarrassed as well she might. Second paper towel, hum-de-dum, whereupon a second woman appeared. This time, ominously, from a stall. Bugger I said, faced with the two to one evidence against me, maybe I got it wrong. She started laughing and agreed. I'm from Key West I said, I'm actually transitioning, and the beard's the next to go. If the other woman who looked like she was having a heart attack ever reads this I can only offer heartfelt apologies. The mistake was all mine, but I didn't wet the seat, I promise. 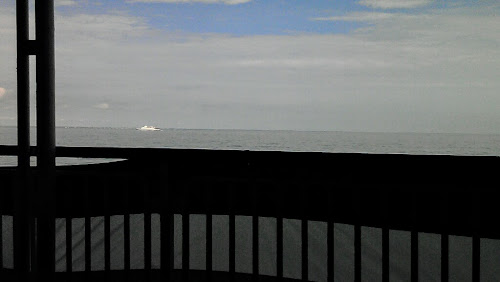 I went outside and tried to blend in among the other bearded sex change candidates. 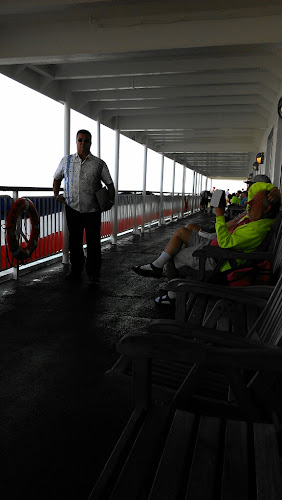 To compensate for the stress my wife went and got the world's largest pretzel from the cafeteria. It tasted like bread dough with large grains of salt but everyone else seemed to like theirs and even Cheyenne pronounced it passable. 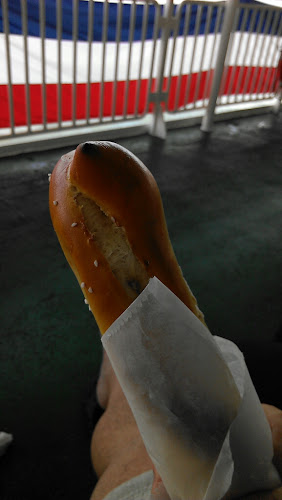 After all that we retreated to the car, but first we had to disentangle Cheyenne from the staircase where she discovered a discarded pretzel in a completely inaccessible spot between the steps. Bloody dog, she never misses a scrap and that sudden halt nearly launched me into orbit on the vertical staircase. The Garden State Parkway attended us as our next stop was Tom's River where Riepe awaited us for lunch. 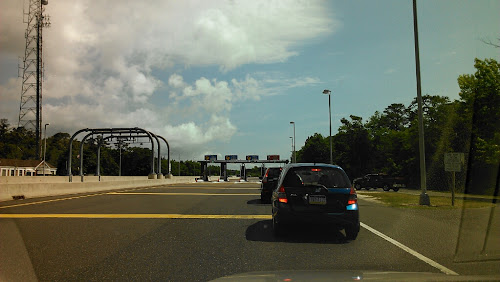 I am not in the habit of giving advice but let me say this, signposting is sketchy in New Jersey, speed limits are mere suggestions and everyone ignores them completely, and if you don't arrive with a supply of quarters for exact change you end up in interminable lines for the change booth (EzyPass is not compatible with the Sunpass -barbarians!). But the drive through New Jersey was a whole other adventure. That we had arrived was sufficient for the moment.