A Wrench In The Works

It has been Republican party policy since the sainted Ronald Reagan's  presidency that government programs useful to Americans should be unfunded, rendered incapable of operating effectively, then declared useless and abolished. The weird part about this plan is that people who will be negatively affected by such cuts support the wrecking of government programs. Why? Because the propaganda is so effective. It amazes me how my fellow citizens, indebted to their eyeballs and thus nowhere near "free", fall over themselves to rush out and support the destruction of decent paying union jobs, pensions, health care programs, childcare, schools, parks, utility infrastructure and even prisons, all in the name of "freedom."  It has been a brilliant Big Lie put about by the master propagandists of the right and they have done very well protecting the interests of the one percent.
So when I find  a nice  piece of artistic humor offering a different view I cannot resist, not least in the hope that perceptions may be changing. This from Santa Cruz cartoonist Tim Egan's brilliant mind: www.timeagan.com/ ﻿ 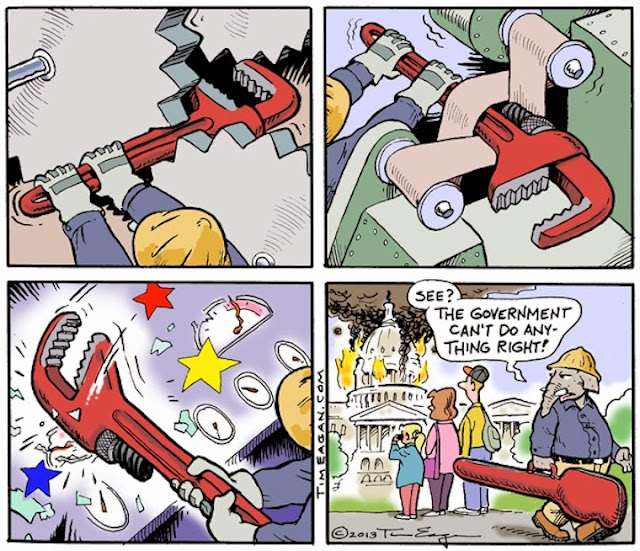 Posted by Conchscooter at 6:00 PM 2 comments:

Is this sky lovely or what? 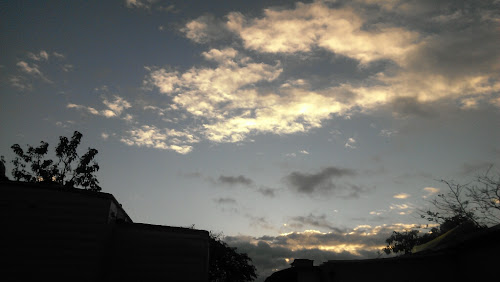 I know it's just me and my hound poncing about in the pine trees, but we're doing it under those big blue skies. 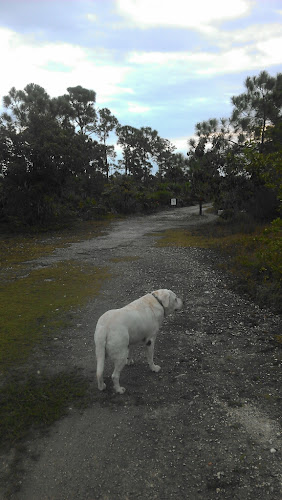 Big Pine consists of more than pine trees unhappily. Well, Cheyenne is happy. She loves the trailer parks where people throw out food and other stuff, invisible to the human eye that turns my dog on. 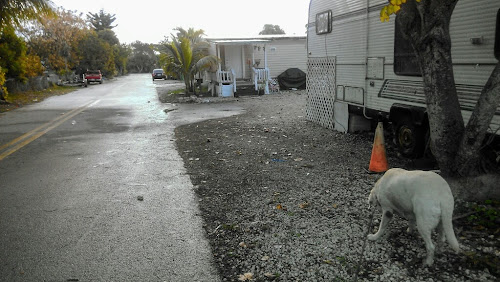 So we split our time, a woodland walk for me, the first ten minutes, which brings us out into the poor people's neighborhoods, and in a country where the rule of law is outweighed by the size of your contributions to our leaders, I call this neighborhood our future. 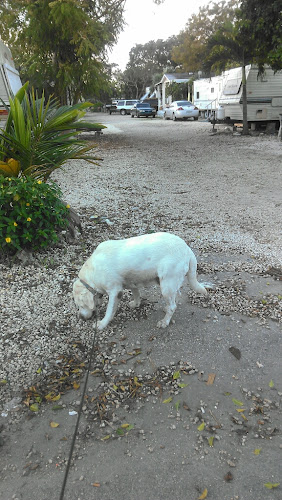 Ninety three percent of our Nation's income goes to one percent of the people. We are told, perhaps by people with an axe to grind that we have greater income inequality than Tunisia and Egypt. Happily our own spring revolt is subdued by our caloric intake. 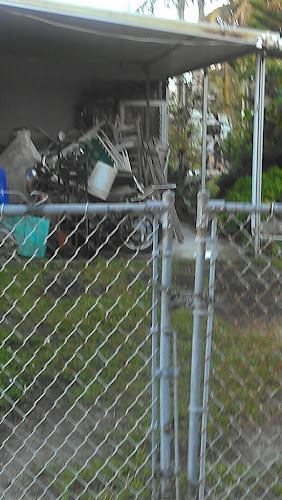 I haven't eaten at the Cracked Egg in a long time but it is home to the classic American diner. Crab Benedict and a glass of beer. Followed by a quick trip to the gym, no doubt! The city of Key West recently gave a beer and wine permit to the doughnut shop next to the Tropic Cinema, and managed thereby to stir up a big frothy storm in the newspaper's cup of public comment called The Citizen's Voice. Alcohol and doughnuts? As though Key West weren't fueled by alcohol. Sometimes it's the only way to make sense of it all when you live below reality. 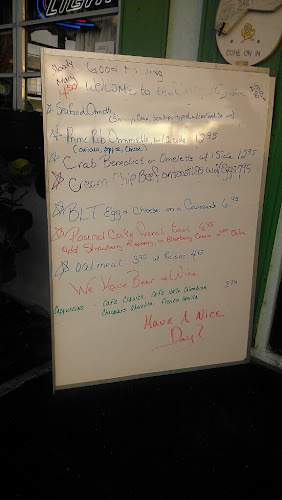 I was walking past a guy's house and his dogs were barking madly at my totally uninterested hound. Oh he said be careful they bite. He meant it too but the dogs didn't. Most of these signs don't either. Beware of which dog? 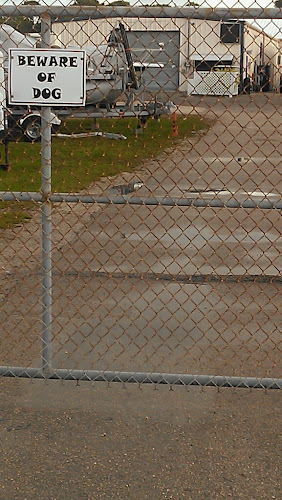 Look at that big sky and the tiny little plea to come and spend money here. It's an odd plea because there isn't actually any competition. Shop here or wait thirty more miles. Actually there is a fair bit going on in the shopping center, including DMV offices the library, the Key Deer refuge office, laundry, restaurants, and the big Winn Dixie supermarket. 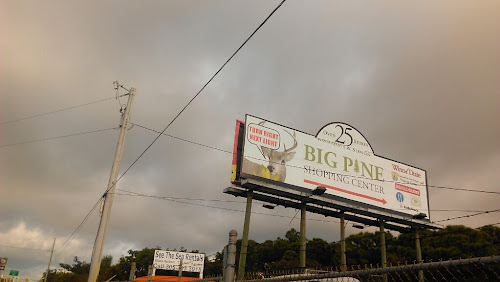 This is Keys living that a lot of visitors who focus on Key West never much get to see. It's families, or those country folk that like their privacy living away from the water, in homesteads buried among the trees. It's a long way from Duval Street and that's just fine for folks around here. For people who focus on Key West and the infamous Duval Street Big Pine is the Keys equivalent to flyover country. So I was quite surprised to see the environmentalists of Key West decided to send a message to the boondock dwellers: 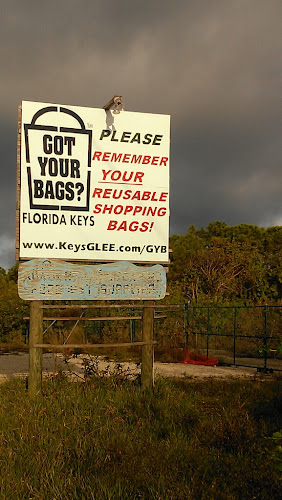 They are a non confrontational bunch the Key West enviros, which is I suppose the right way to do things in the land of doing your own thing, but there is so much to preserve and so little being done. I don't see many people with shopping bags in Winn Dixie so perhaps the message needs to percolate a bit. I wonder if they bring bags to the drive through liquor store? No really, you can buy liquor on the go around here, in defiance of common sense and strict DUI laws. 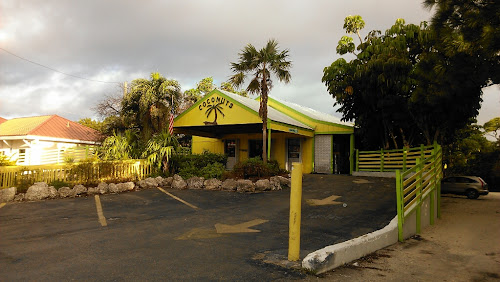 We live in interesting times and for those of us that prefer predictability the Chinese curse seems more real than we might like. The stock market booms just as the Federal government withdraws funds across the board as our political leaders go into budgetary stalemate, and so we look to the future with some wonder. At least I do, as I am of the camp that the way out of economic recession is to spend, not to destroy social programs. I hope Big Pine will be a good place to live under these big skies and weak economy. Theoretically small towns are good places to be when times are weird. 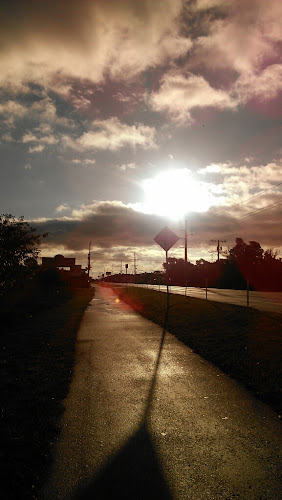 For now the sun shines and the dog is satisfied. Time to go home and sleep, perchance to dream of better times ahead. 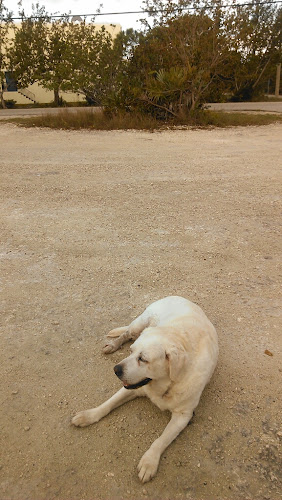