I am not very good at accepting praise and the words Webb has written about me embarrass me but here they are. He is very kind.
http://self-portraitinthepresentseajournal.blogspot.com/2019/01/hilton-head-island-some-of-us-are.html?m=0
I never did ask myself Why Me? Which perhaps reflects a lack of self awareness on my part more than anything else! These days I walk Rusty as much as I can; I spend what feels a disproportionate amount of time in the gym(!) and find time to sleep before going to work for a few hours.
The thing Webb doesn’t know is how his writing about sailing exposed a young would be sailor to the emotions of being on the water alone and perhaps not doing that well. Webb suffered every kind of set back and you can read what I read as his books are online ready for your electronic reader. Most travelers wrote travelogues but Webb was his own man and his own writer and he told it like it was. That made him stick in my mind.
Thank you Webb for being the original example that cane to my aid in a difficult moment.
Posted by Conchscooter at 12:27 PM 3 comments: Links to this post

There have been some weird contortions in Key West lately and I don't know quite what to think. The tourist people have done a bang up job advertising Key West this winter, as usual and the throngs are thronging merrily even as I get reports of weather not too bad Up North. This year we have cable TV at our loaner apartment and I have once again developed a perfect loathing for the art of advertising on the small screen. In between all the money spent by the pharma industry and insurance companies (imagine that!) one catches a glimpse from time to time of those splendid islands in the Gulf Stream, not the Bahamas, and I immediately want to visit them until I remember I live here. No wonder the hordes are hoarding us on these warm winter, sun filled days. 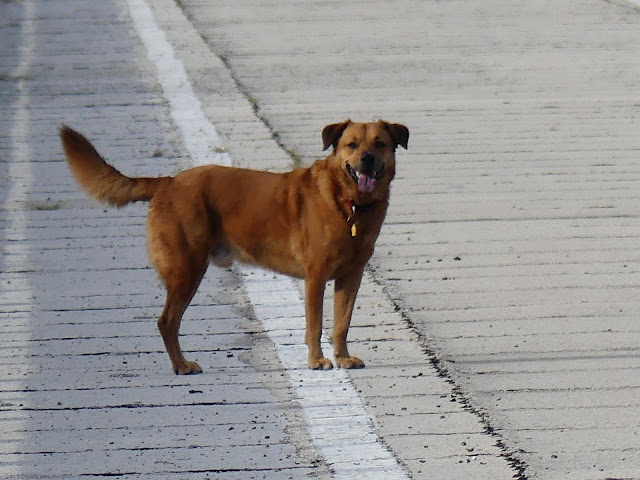 And the Tourism Development Council (TDC) comes in for a fair bit of criticism for effective advertising which is rather an odd approach to a successful organization. They are doing what they are very well paid to do. Of course I understand the irritation of my year round neighbors who get fed up with being swamped by visitors but my reflections on this my page were prompted by a  rather sensible comment I saw in the delicious anonymous comments section of the newspaper, known as The Citizens' Voice:
“Those complaining don’t understand the TDC. The tourist experience determines the level of return customers. Yes, the TDC budget is as large as the Monroe County Sheriff’s Office, but they must continually attract new visitors, mostly from overseas where people only know what the advertising shows them.”
There you have it I guess, despite our crappy attitude toward visitors they insist on loving us to death. 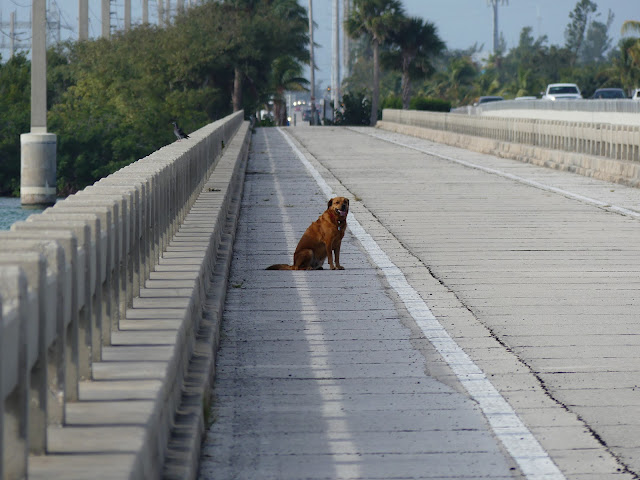 And on the subject of tourists and poor treatment of same there are the so-called cosmetic shops that line Duval Street and whose behavior is so uniformly awful the lethargic city commission has been moved to action. This after years and years of dismal treatment of customers by these stores. And before I join the legions criticizing the commission we should remember the problem has been tackled by the Code Compliance department to no effect and now citizens are protesting in front of the shops lawfully much to the annoyance of the shopkeepers who expect the police to shut down free speech. I heard one officer patiently explaining to a shopkeeper that expressing an opinion on a sidewalk is not illegal and if you have a beef with it you need to go through the civil courts. Sound advice that probably fell on deaf ears. None are as deaf as the heads filled with righteous indignation. 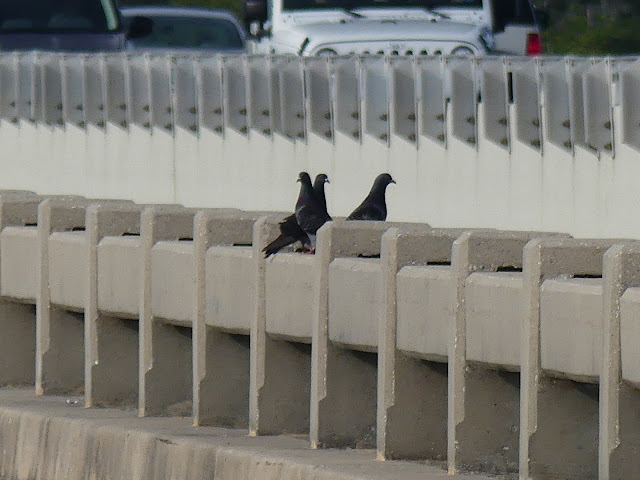 What tends to happen is this, as reported in the paper. Store employees are described as aggressive salespeople offering creams and potions to make the customer look more beautiful and younger and all that stuff, normal enough so far. The problems arise in the billing when acts of gross over billing have been reported on credit cards to the tune of hundreds of dollars. Apparently customers who may be distracted, or older, or not self assured are viewed as potential victims and sold grossly over priced products with no chance of a refund. These cases have been reported in the newspaper which, once publicized have a tendency to be resolved amicably. However people are annoyed enough they have taken to protesting. And now the city commission is also acting invoking a  state law to rein in these errant shopkeepers. 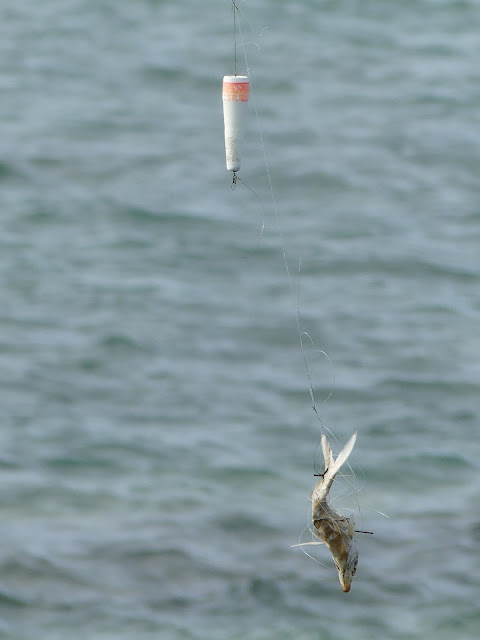 And that's where things went a little odd. I was surprised to see Commissioner Sam Kaufman veered off course and voted "no" to cleaning up these cosmetic stores. Kaufman is normally a solid citizen supporting all things good and decent in Key West and it brought me up with a jerk to see him supporting these cruel overcharges by unscrupulous merchants. The reason? Most of the stores are owned by Israelis and he thinks clamping down on bad  shop keeping practices might smack of antisemitism. No, he really said that in a public meeting as reported by the newspaper. 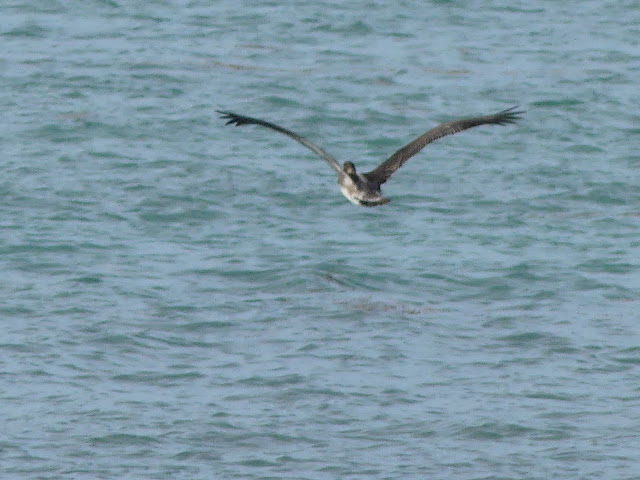 Well, I was pleased to see a really crisp clear refutation of such a position also in the Citizens' Voice as follows:
“How egregious does the behavior of cosmetic shop employees have to be for City Commissioner Kaufman to support the new ordinance protecting the public? Assault? Battery? Implied in his comment, ‘sensing a lot of categorization’ is the specter of antisemitism. I regret that he was not asked if he would have voted ‘no’ to the ordinance if the shop owners were Russian or French. Using antisemitism as a reason to not protect the public is doing a disservice to the Jewish community and dilutes this painful practice when it does occur. We know what happens when ‘wolf’ is cried unnecessarily.” 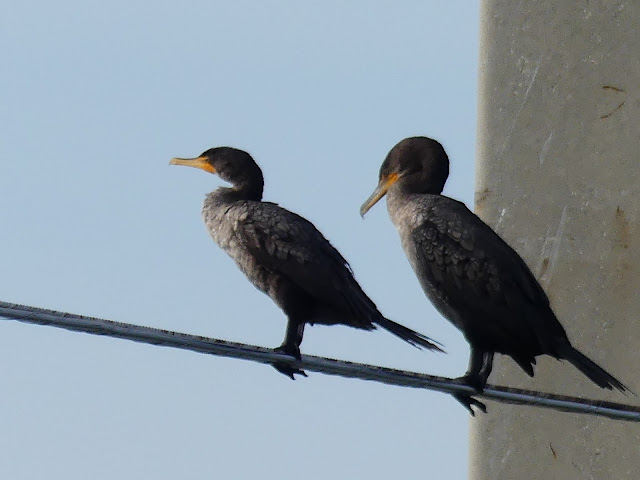 Anyway  there is life beyond the storm in the teacup at City Hall and the shopkeepers will have to sharpen up as the ordinance passed overwhelmingly. Meanwhile I was out with dog and camera again looking at the world through the lense of my big camera. The old Flagler bridges built in 1912  make for lovely walking cycling and fishing routes and the state has done a lovely job of refurbishing them as you can see in the second picture from the top where Rusty was prancing off ahead of me. That they were once railroad bridges is not obvious anymore. And what's even more surprising they are refurbishing more and more of them. Some have been gated off as they are unsafe and awaiting work but there is an effort underway to create a continuous centennial bike path through the Keys. Another tourist attraction to advertise on the TV! 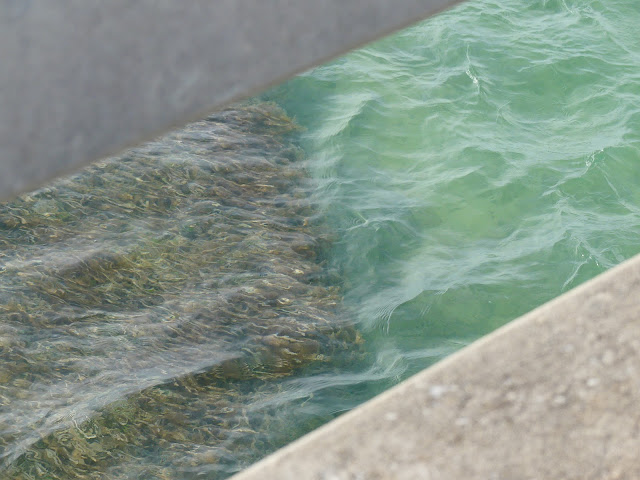 Personally I don't see the fun of cycling the Keys especially if you happen to have the wind in your face but tons of people do it and love it. The big scare is the Seven Mile Bridge which is intimidating for some car drivers and motorcycle riders with agoraphobia issues. The state has got a huge bridge repair job underway on the old railroad bridge alongside the 1982 new bridge but as far as I can tell it will only go to Pigeon Key about half way though I'd love to see the old seven mile bridge opened all the way with a gorgeous 70 foot arch in the middle to accommodate sailboats similar to the arch on the new bridge. 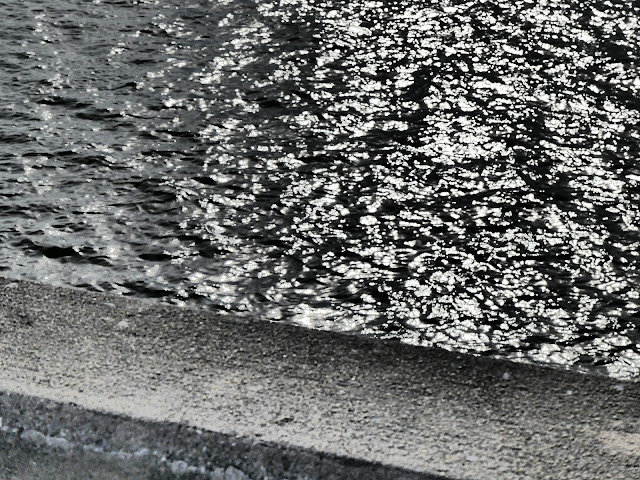 This was a view I caught looking south at about Mile Marker 13 in the Saddlebunch Keys between Big Coppitt and Baby's Coffee. I got it by trying a bunch of  filters on my camera as I sat in my rolling walker on the Flagler Bridge. Rusty was skipping around playing his own private games on the bridge. 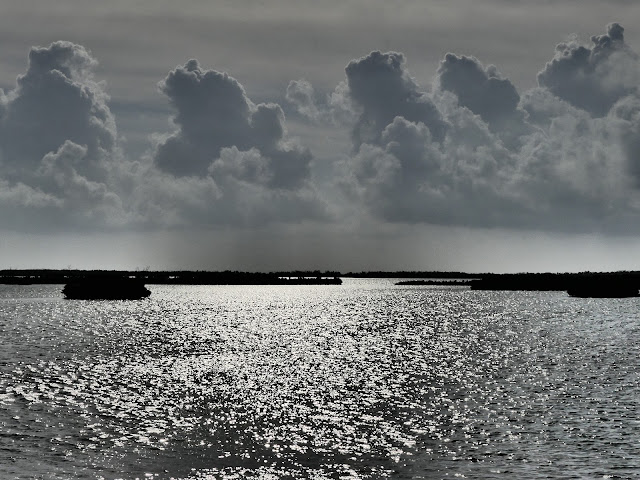 So, yes some of the views in the Lower Keys are splendid and doubtless pleasant to enjoy on a bicycle and heaven knows lots of winter visitors do it. For some reason pulling over in the car and stopping just about anywhere isn't so popular so we get stuck behind people trying to drive and take photographs at the same time so naturally the driving suffers. Much better pull over and enjoy the view. It works for me. But as we have established I've not got much in common with the winter crowd. Keep a low profile and wait for Easter...and take lots of pictures!
Posted by Conchscooter at 12:00 AM 2 comments: Links to this post