I found this image on Modern Vespa and it made me chuckle to myself. I guess it helps when you don't really give a toss what other people think, but I have to confess I am not taking my pink Crocs to Iowa to pick up the Vespa. It is enough that I will be riding a "moped" across the mid west. Once I get the "moped" home I will face the disdain of the motoring public on Highway One. When riding my wife's Vespa, even at 60mph I find cretins tailgating me and imbeciles cutting me off, behavior not permitted by the sight of my burly Bonneville occupying it's spot on the roadway. But I will have to keep this image in mind. Hoping of course the last picture is for effect and not reality.﻿ 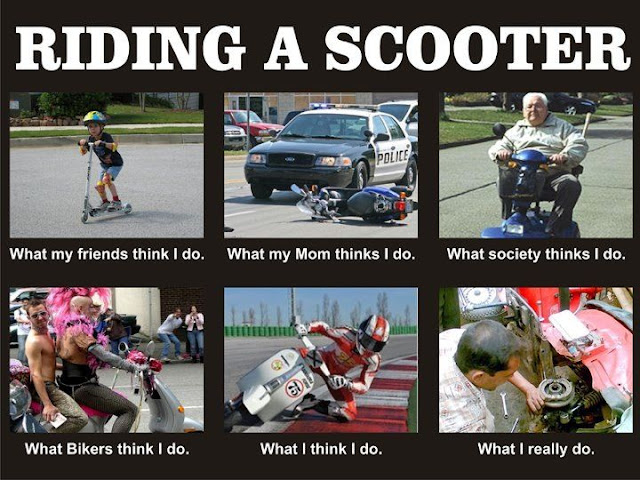 Posted by Conchscooter at 6:00 PM 3 comments: Links to this post 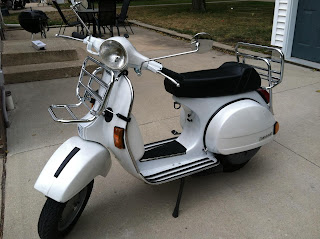 Jeremy sent me this picture of the Vespa with travel accessories.
Posted by Conchscooter at 3:26 PM 4 comments: Links to this post

A version of this essay appeared on Bradys blog http://www.behindbarsmotorcycle.com/   earlier this month. Tomorrow I fly to Mason City to start the trek home and I will be posting essays to follow in real time.

Normally my wife is a hard bargainer but Jeremy in Iowa was clearly not excited about having to let go of his baby and we sent him a check for the full asking price of $2500 for a 1979 P200E without harassing him even a little bit. True, Jeremy restored it meticulously in 2009 according to his ad, but why would I pay that much money for such an ancient machine? The short answer is nostalgia, but the long answer is actually quite long, and it is an answer packed with practical considerations.

In 1970 my Italian mother bought me an orange Vespa 50R as a twelfth birthday present. I couldn't ride it legally for another two years but I lived in a isolated mountain community in the central Italian region of Umbria and a kid riding a Vespa was not something anyone noticed. Helmet? Nah. Insurance? Huh? Cellphone? A personal phone was pure science fiction as I wandered the hidden roads and trails miles from home.I always had the travel bug and before the Internet I learned what I gleaned from motorcycle magazines, reading about the exploits of the pioneers who went before me. Every motorcycle I bought as a young adult was my tool to travel over the horizon so I always looked to the practical, low cost, easy maintenance (no maintenance was never an option back then!) yet I wanted the glamor of the motorcycle to shine through the adapted luggage and the piles of camping gear when I traveled the roads of Europe and North Africa in the 70s. A Vespa was not manly enough for this youthful rider. Then I met this man at a Motorcycle show in Milan.

My guru Roberto Patrignani rode to the Tokyo Olympics in 1964 on a brand new Vespa and he extolled the virtues of the lightweight easy to handle scooter with eight inch wheels. I was planning a trip across the US and was thinking about a Harley, influenced by a strange movie I had just seen in a classic movie theater in Rome. I was no dope smoking Easy Rider but the principle of riding a Harley across the US looked so right, so correct even though Harleys then were notoriously finicky. In the event Patrignani convinced me of the merits of the Vespa as touring machine at 60mph, so I bought a brand new P200E in Brooklyn and took off with a good deal less cool and a good deal more reliability under my butt! Five months later leaving Mexico by way of Nogales riding north for the border my formerly pristine Vespa looked like this but ran perfectly, still returning 60miles per gallon of whatever fuel I found in Mexico:

I kept that Vespa for ten years commuting in Santa Cruz California where I settled the following year. I have regretted selling the scooter ever since so when my wife saw the love in my eyes she thought getting an Indian built Stella was just the thing for me in Key West. $4200 later this tangerine P150 lookalike was all mine, orange just like my first Vespa. It was meant to be, except it wasn't, because it ended up seizing almost immediately and it never did run right as we can see here:

But the scooter lust was reignited. I tried again with a 2007 GTS 250, a proper modern Vespa at $7200. That too kept crapping out on me though it did last ten thousand miles. It had fuel pump and electrical relay problems that meant it stalled suddenly and at random in traffic.

I loved it, fast and comfortable yet like the Stella, its anithesis in the race to complexity, it wouldn't run reliably. My wife pronounced it "unsafe at any speed" and off it went, sold to a man from Kansas for $3200. Scooters are costly! But the Vespa cult was deep under my skin. When Key West's surly Yamaha dealer got the Genuine franchise I'd ride by and see the Stella parked out front, waiting for me to give the brand a second chance. "No Indian motorcycles," my wife snapped when she also saw me eyeing it with lust searing my eyeballs.

I've had five trouble free years with what is undoubtedly the best motorcycle of my life and after 42 years riding I say that with conviction. Yet my 2007 Triumph Bonneville has, as of this writing, 67,800 miles on the clock, well over a hundred thousand kilometers. I rack up the miles at a rate of nearly 1500 a month commuting in a mild climate, touring Up North when I can with the odd Iron Butt ride thrown in. I adore the Bonneville but I want to slow down the accumulation of miles. I want to keep it a long while and no one really knows how long it will last. I want it to last the rest of my life. I need, for the first time in my life a back up ride. I have never owned two bikes at once, till now. My back up had to be economical, easy to use, highway capable and it had to speak to me. I considered a Suzuki 250TU, a Honda CBR 250 or a Sym 150 Classic but none of them hit the spot. Suddenly it was obvious, I could buy a machine with no final drive chain (the Vespa has four gears and direct drive), a spare wheel (with easily changed split rim mounted tires) and lots of room for luggage front and back all with an easily mounted open frame design. The economy has knocked the market for restored Vespas into the reasonable price range and the more I looked around the more I knew it was doable. The problem was, after all the money wasted on the Stella and the GTS would my wife go for another money pit on small wheels?

I don't know that I will get to do another cross country trip on my P200E, but I can dream. Italians still follow in Patrignani's footsteps and organize "Raids" (journeys) by Vespa the way the maestro showed them in his books. In America where there's no substitute for cc's the idea of a long trip on a 65mph 200cc "moped" is absurd, but I know it can be done and it can be fun. So tomorrow morning I fly to Des Moines from Miami and sight unseen bungee my suitcase to the rack and ride Jeremy's former beloved 2000 miles home to the Florida Keys.I am scheduled to be at work Sunday evening so time is limited. In my mind I will keep this picture of my guru in Afghanistan in 1964 lighting my way as he did on my US trip in 1981.

The design has been refined over 50 years and it really does work well. For me the 200cc model with 15 hp works well as a commuter, a tourer and as a nostalgia machine all in one. Any resemblance between the picture below, taken on the Tropic of Cancer in Mexico's central mountains, and the photo above is not at all coincidental. Because the Vespa as tourer in concept still works for me so I hope very much this journey from Mason City to Key West works and brings back to life a dead memory of travel by Vespa which lights up my memory bank. I expect long boring hours in the saddle with nothing but my thoughts to pass the time, as I will have nothing electronic, no GPS, no iPod, no heated grips to warm me on my way. Just me, paper maps, serendipity and a lttle cast iron cylinder chugging away the miles.

I have no advice for others, not that they would take it anyway. This is what moves me. It looks weird from the outside but from the inside there is method to my madness. And I'm excited about going to Iowa of all places because that's where my Vespa is. My Vespa. Cool.