Yesterday I posted the meditative night pictures I took while walking Cheyenne Thursday night/Friday morning. Like this shot of the Beau Geste Fort Zinderneuf Church on Fleming. It has cream colored walls and crenelated towers and it looks just like the scale model fort I had as kid to go with my French Foreign Legionnaire model soldiers. 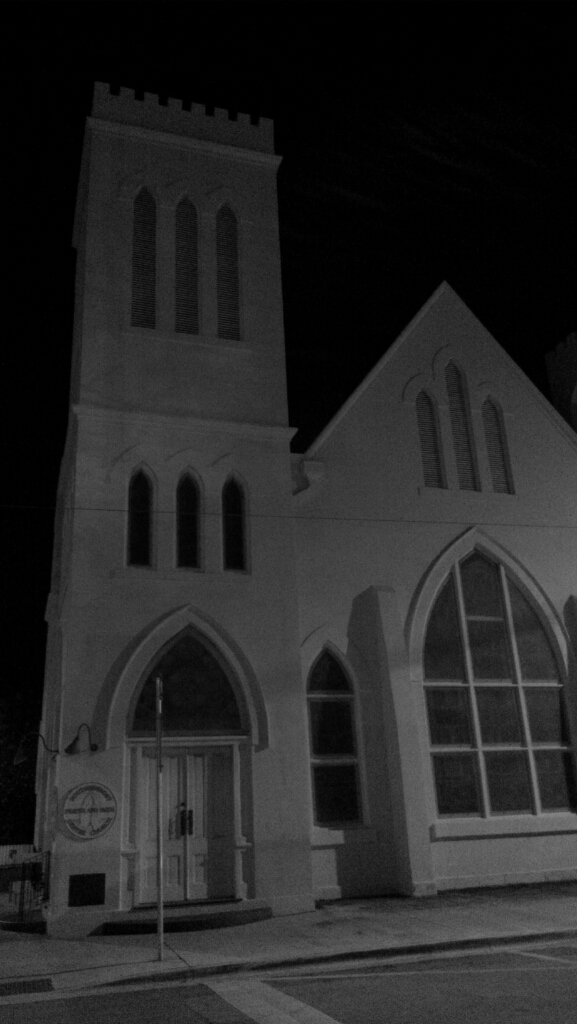 I think back to my childhood and it seems like it belongs to some other human. Me half a century ago on the carpet winning the white man's war of subjugation in Africa. Weird.

The restored chain motels on the main road into Key West have not yet been opened for business but the new resort near the Key West  water front is open and all lit up in the middle of the night. 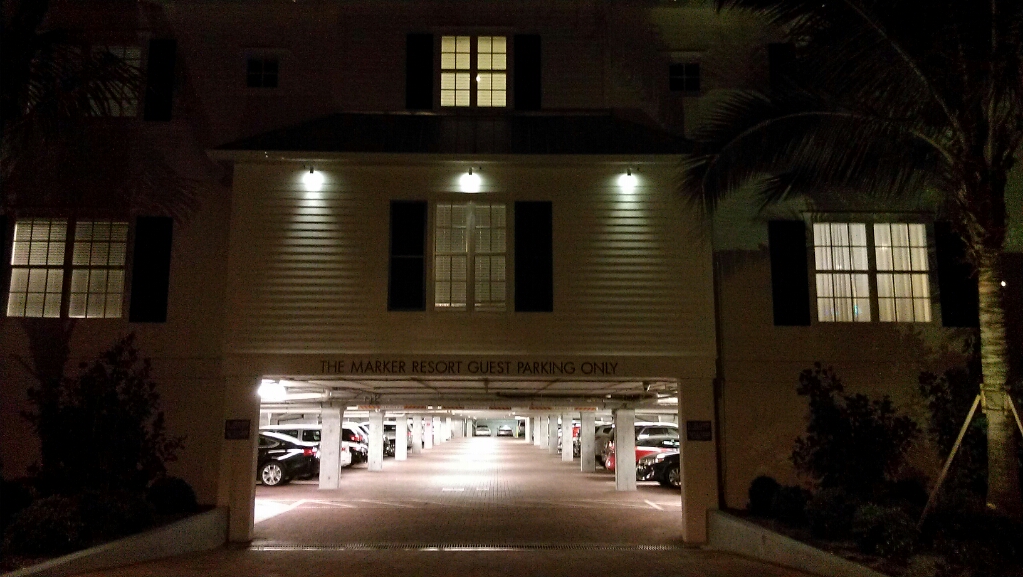 I shouldn't be as amazed as I am but I remember this place as a wooded lot, actually a trailer park surrounded by greenery and RVs  parked in the middle of town. 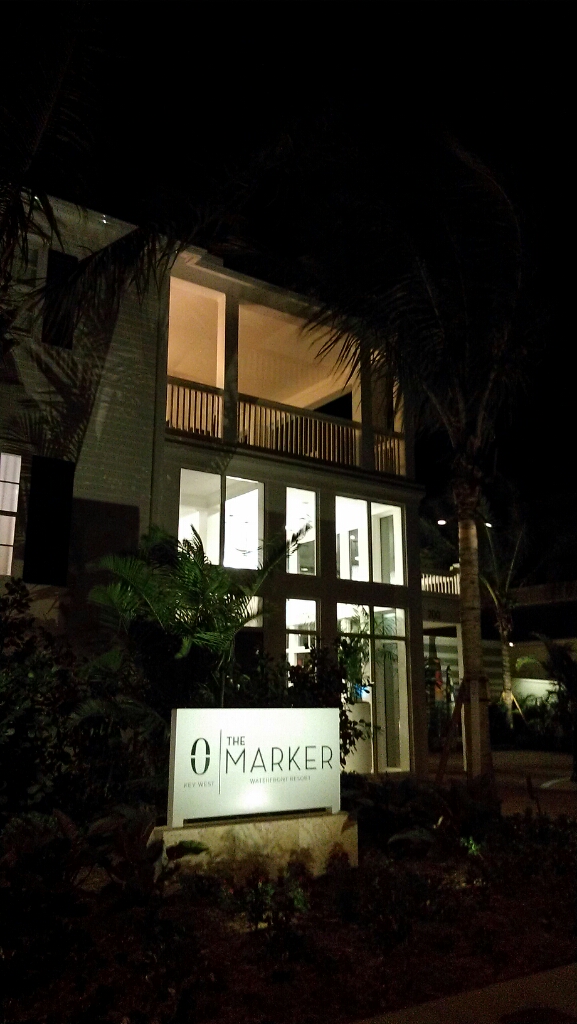 Perhaps I romanticize Jabour's but it seemed a better use of the land. Even at the time I was astonished it was viable and allowed to exist in a town dedicated to generating top dollar. The Marker, even with its support of public art seems nothing more than another big architectural yawn "in the Key West style." They have stuff like this at Disney World. 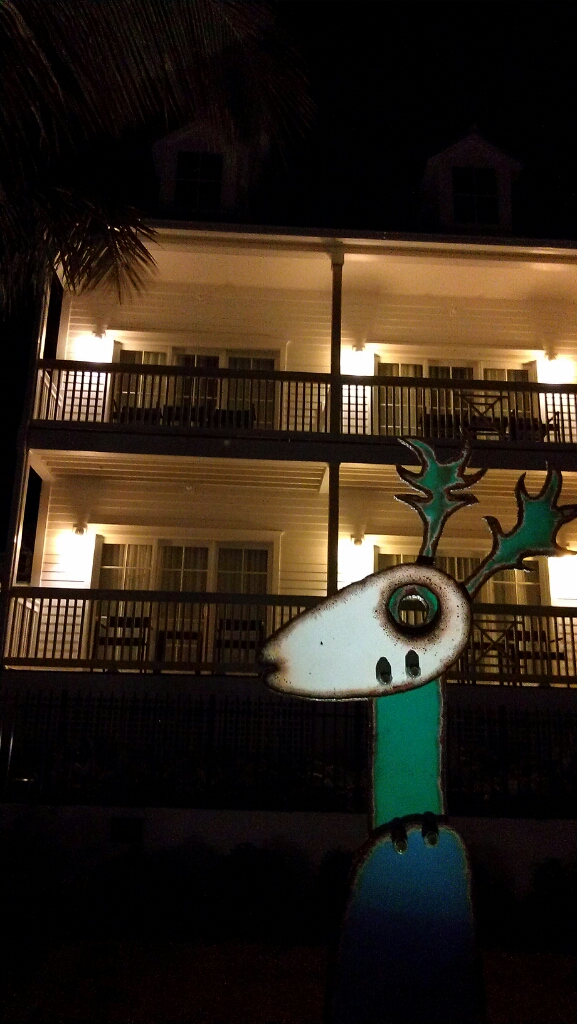 It's not easy being green but Kermit manages it quite well, making a flourishing enterprise from the business of making Key Lime products. You should try walking past the store in the middle of the night and on the Greene Street side there is a TV blaring some sort of interview show which recorded an interview with the indefatigable Kermit in Korean or Japanese or something. 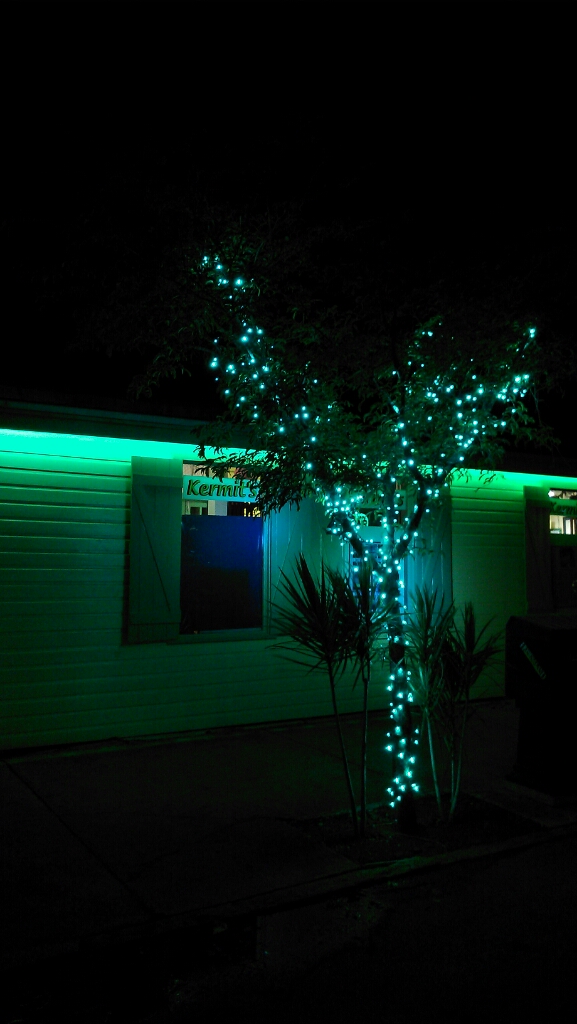 Green Street at half past two. Lovely, human-free as I like it best. 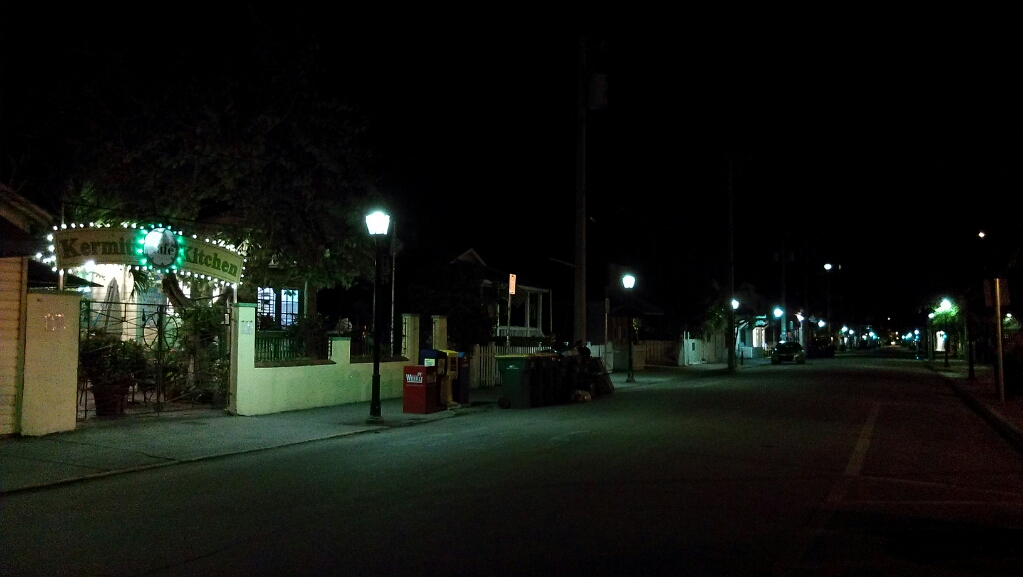 People abandon shoes like they are suddenly radio active all over Key West all the time. Perhaps its the benign climate or something combined with excessive alcohol intake. 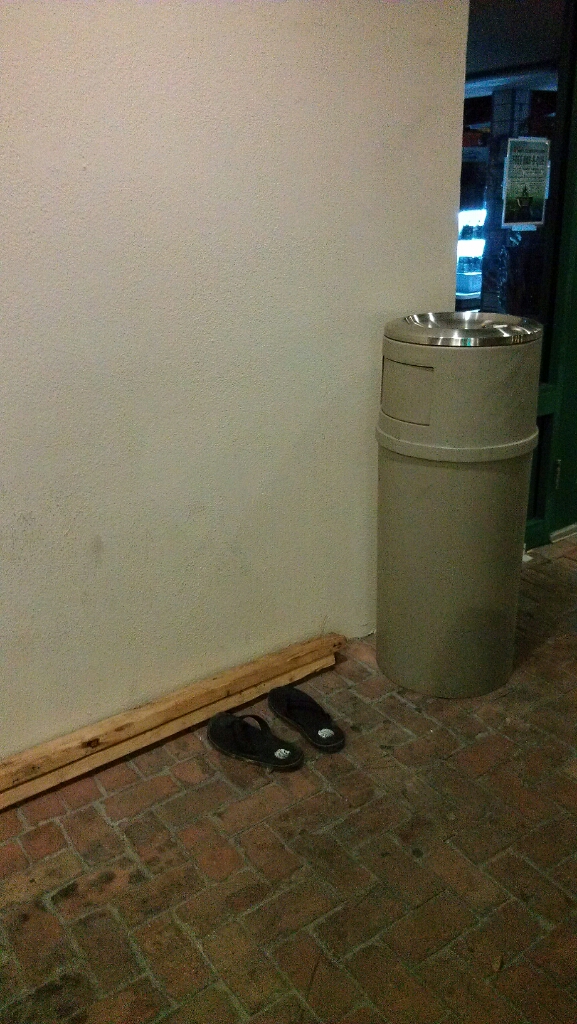 I was looking at Old City Hall when I noticed a rather large scooter toppled on it's side. My first instinct was to lift it up but then common sense prevailed in our messed up world. I wasn't sure I could lift it and perhaps I might damage it and it wasn't going to fall any further, so...I left it, a horizontal shadow in the dark. 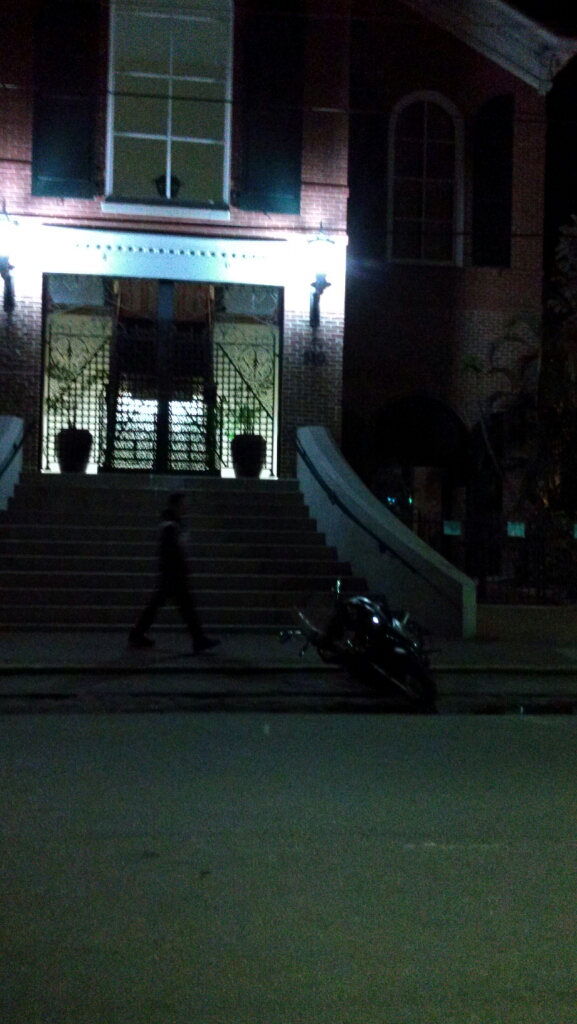 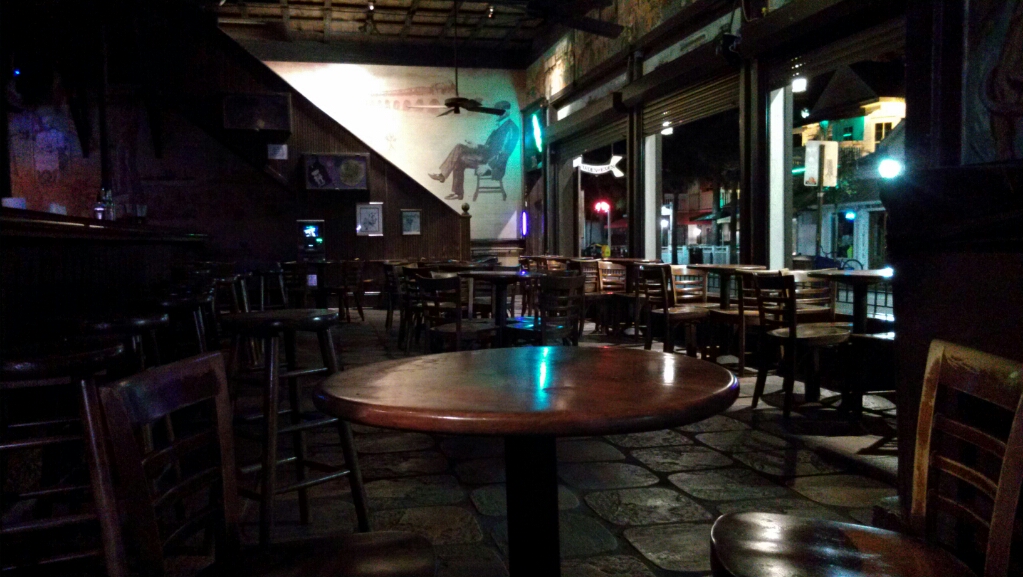 Radio Shack is abandoning Duval in the drive to reorganize the badly managed company. The top people screw up and the little people lose their jobs. The stores in Key Plaza and on Big Pine stay open. 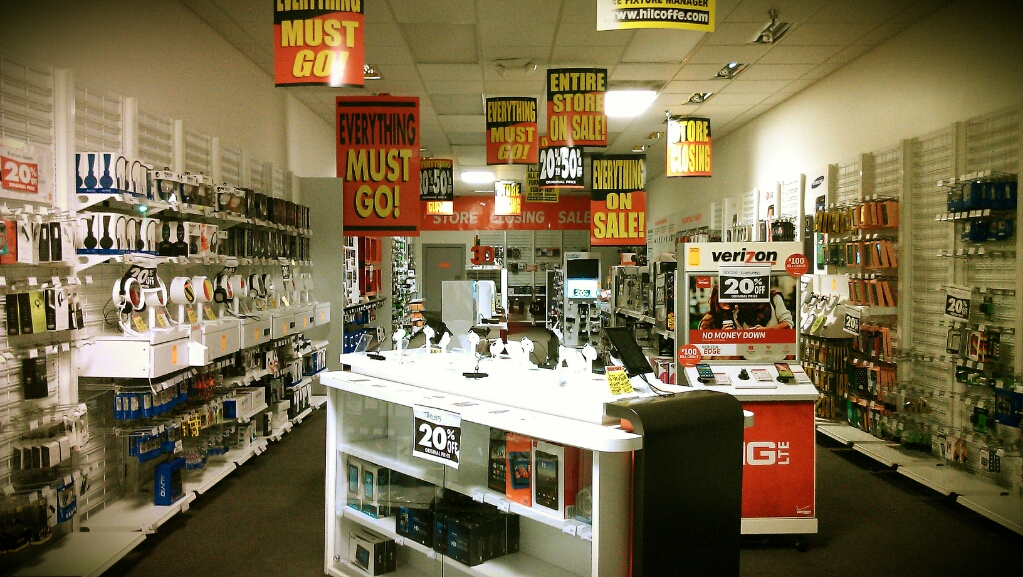 This sign will be gone soon. It will be one less chain store on Duval, looking on the brighter side but who knows what will replace it, another bland unexceptional chain store no doubt. 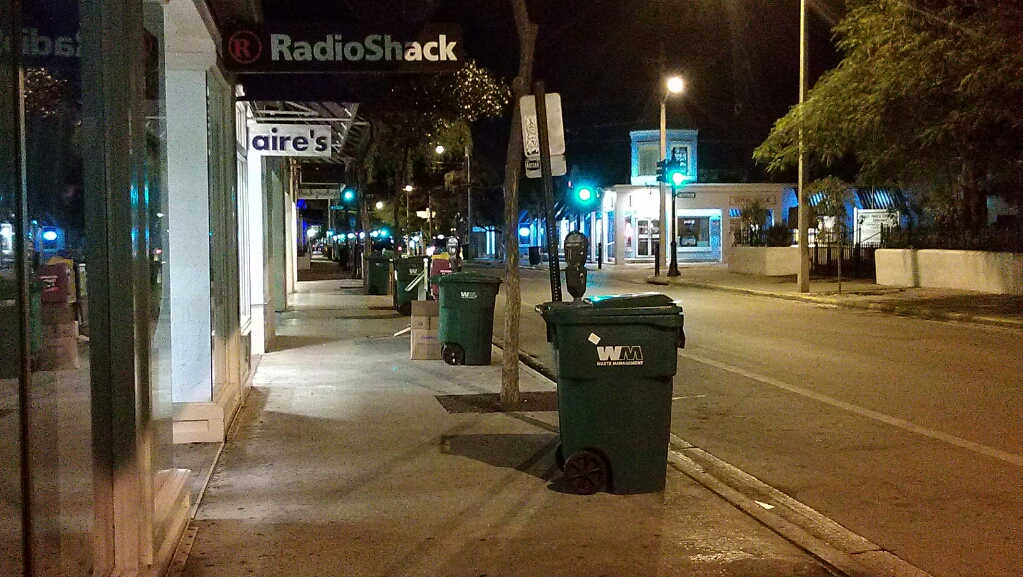 There is a little parking on Duval Street frequently occupied by...one doesn't want to think too hard about that. A dreamer, a wanderer at the end of the road, no visible means of support, not the kind of person to encourage the chain store business on Duval, but not exactly a social asset for the winter months either. 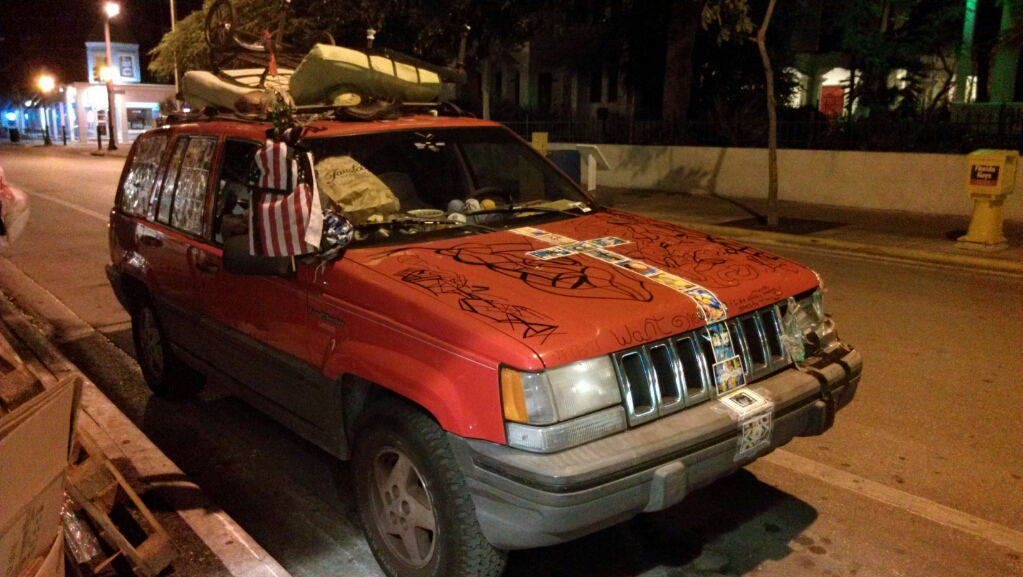 And then away from Duval and the lights and the smell of spilled beer soon to be swept up by the early morning city work force, and back to the gloomy, shady meditative back streets of Old Town Key West. 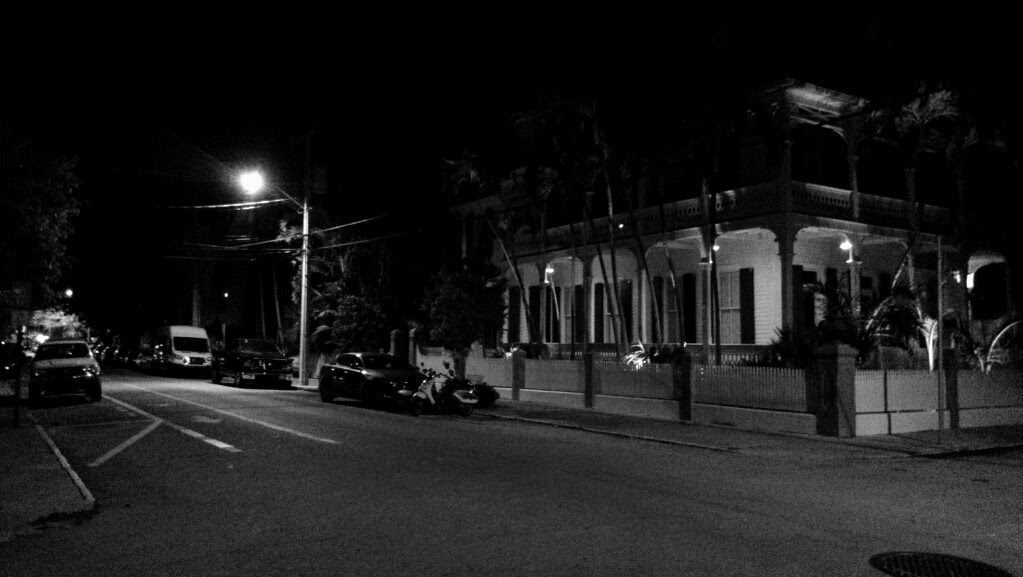 Much better.
Posted by Conchscooter at 12:00 AM No comments: