I had dropped my wife off at the airport as she took her teacher's spring break and flew to California for a week of catching up with friends. That left Rusty and myself to drive home from Fort Lauderdale at an unusually early hour of the morning. 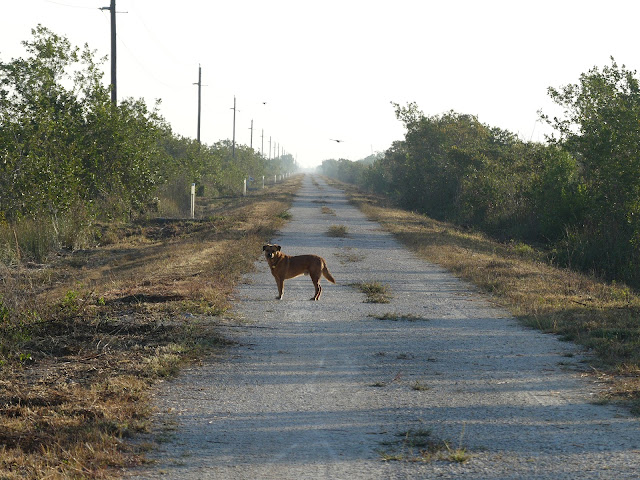 It was pleasantly cool even though temperatures were in the upper 70's at seven o'clock in the morning and I was ready to walk as far as the eye could see along the levee. I thought Rusty might enjoy stretching his legs unencumbered while I played with my camera and looked for wildlife... 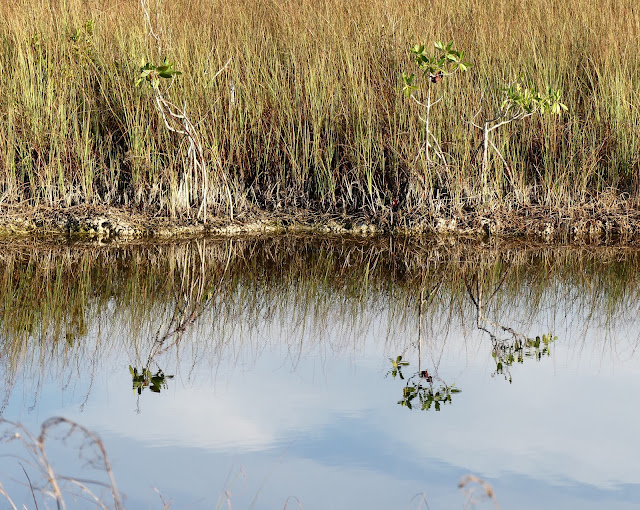 We were left in peace as the traffic on Card Sound Road could be heard but hardly seen and the levee has been closed to unauthorized vehicles by two steel gates. 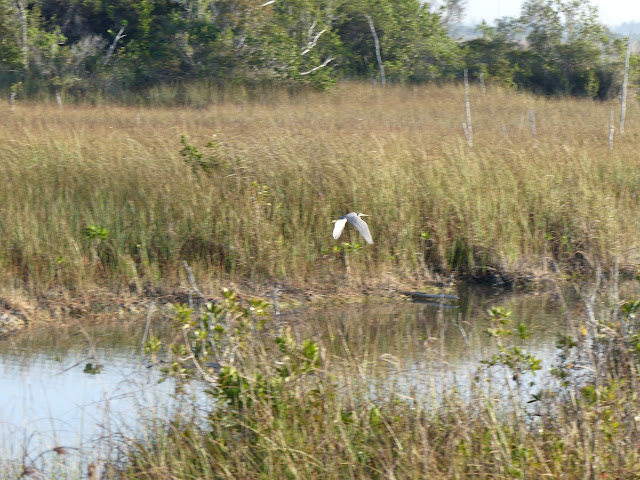 I think they are trying to corral all terrain  vehicles that  like to play in the mud around here. There sure aren't many cars likely to show up on the levee. 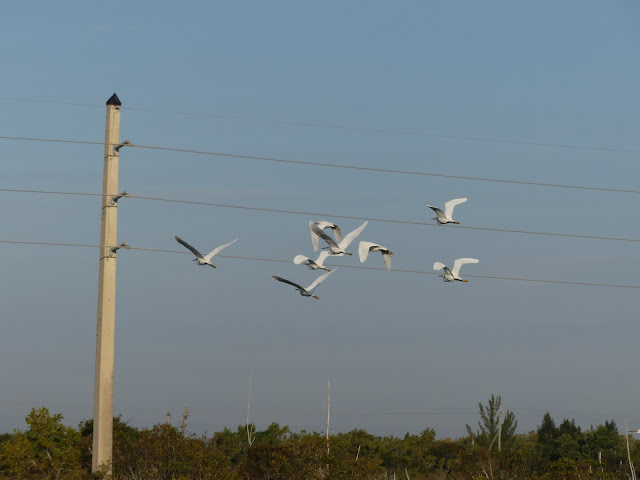 I saw nothing but  birds in the marshes as we walked in the cool morning air. 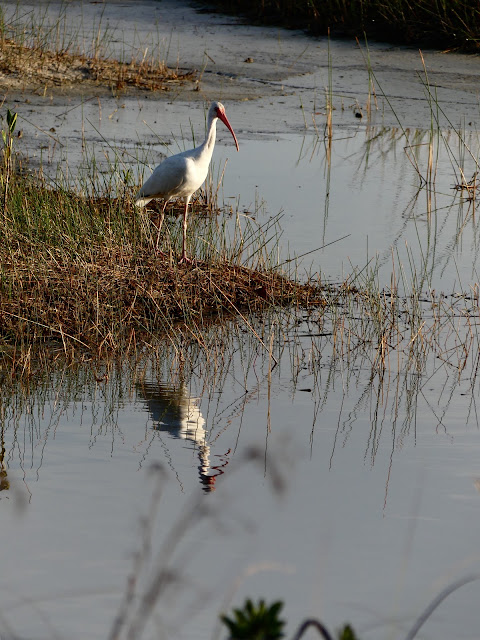 The usual ration of  ibis and heron. 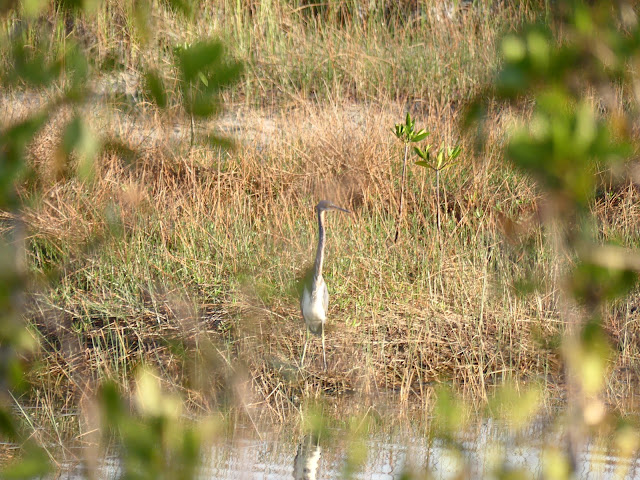 And of course our old friend the red mangrove: 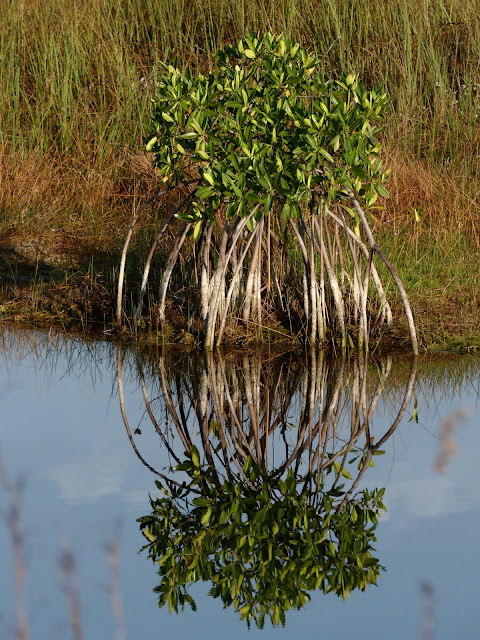 The Everglades are often portrayed by people who don't know as creepy dank forests of moss covered cypress trees rising out of stagnant pools of tannic water...T%he stuff of horro movies. 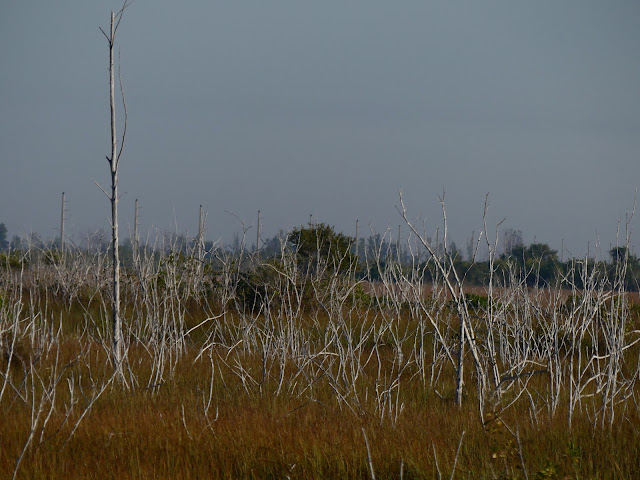 Marjorie Stonbeman Douglas, an early Florida environmentalist coined the term River of Grass to describe the Everglades and wrote a densely unreadable book by that title. 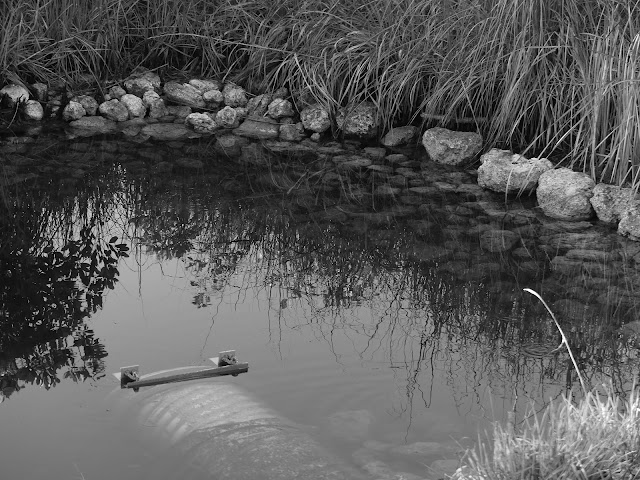 I'm not sure what these water reservoirs were about, but they were beautifully made collection points: 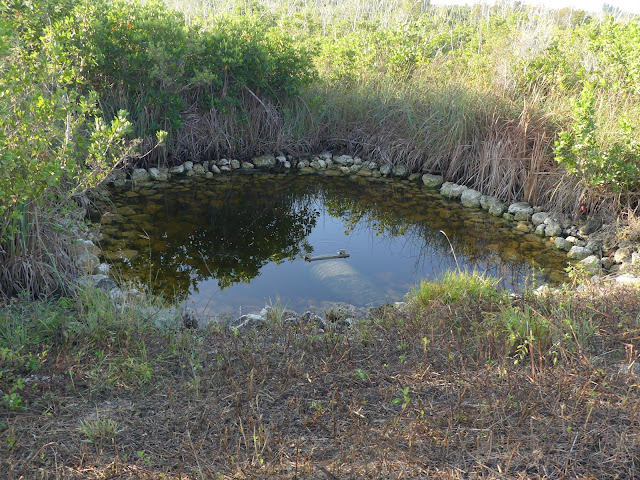 This is the river of grass, fresh water flowing south through the state, being cleaned and filtered as it goes unless polluted by farm fertilizer run off... 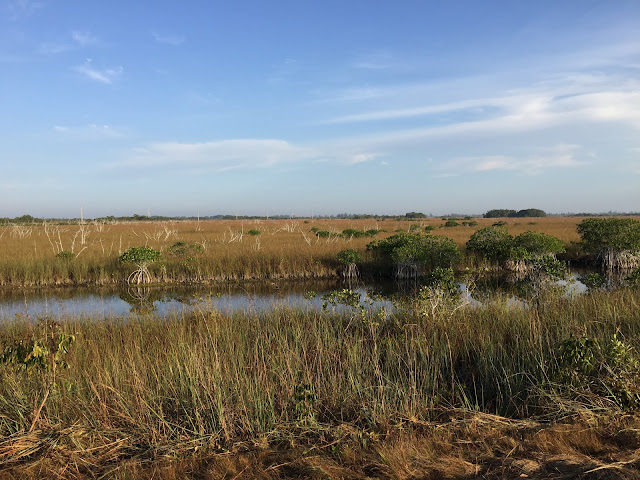 And in the middle of the reeds there are clumps of hardwood trees on small rises of dry land, so called hammocks where Indians lived in their sleeping arrangements actually called hammocks. A misunderstanding between the original inhabitants and the invaders. After all, they were called Indians by the confused Spanish who thought they had arrived in India. 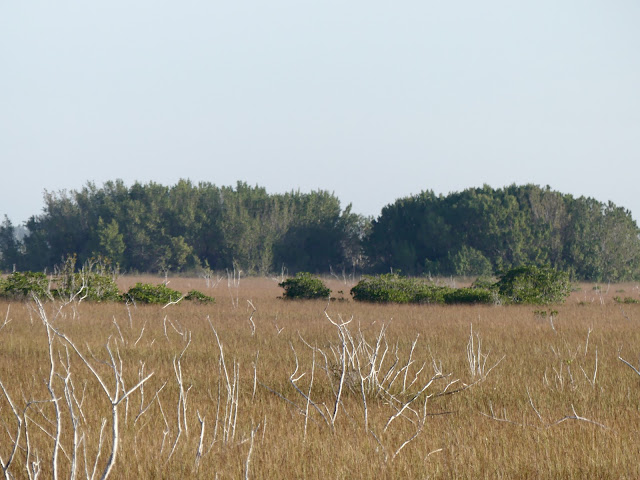 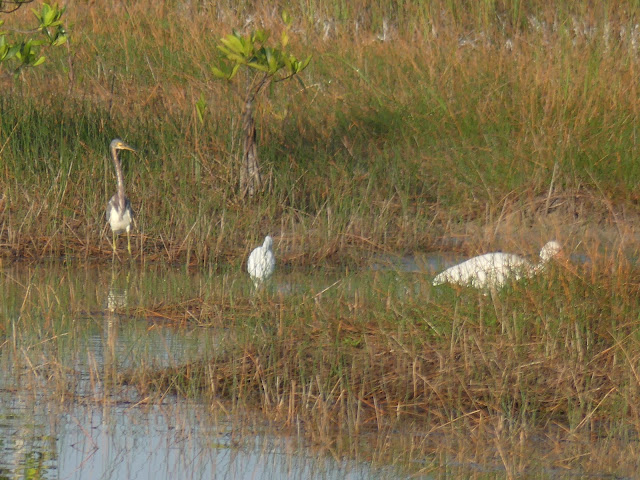 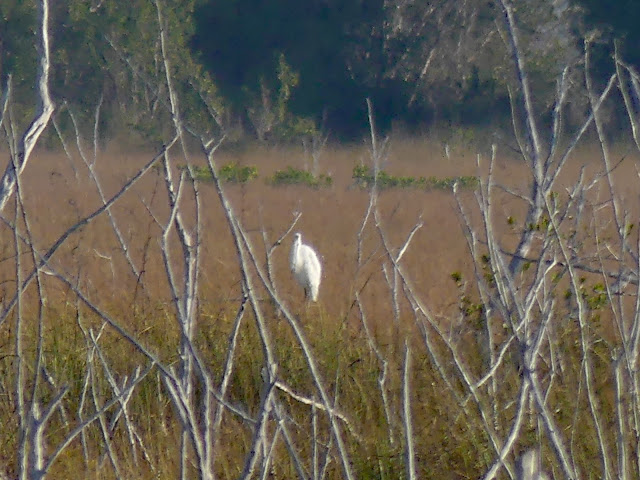 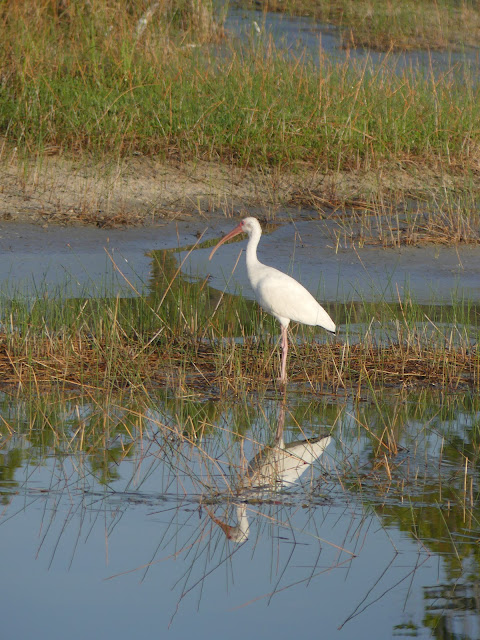 For some reaosn I never figured out Rusty got spooked a half mile in and suddnely turned around and put his tail down, as he does when scared and trotted nervously back to the car with me in pursuit. I have no idea why he took fright but I never saw anything. I didn't insist and simply gave him some water, stuffed him into the car and took off for home. 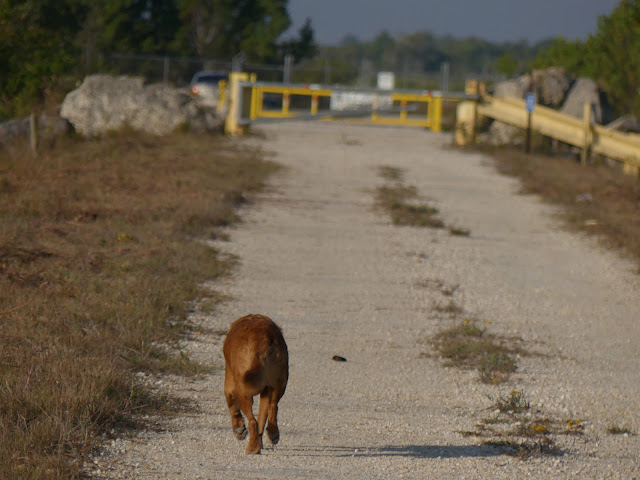 I saw these bullet holes in a sign advising no vehicles beyond this point. Cheaper and more efficient to shoot with a camera I think. 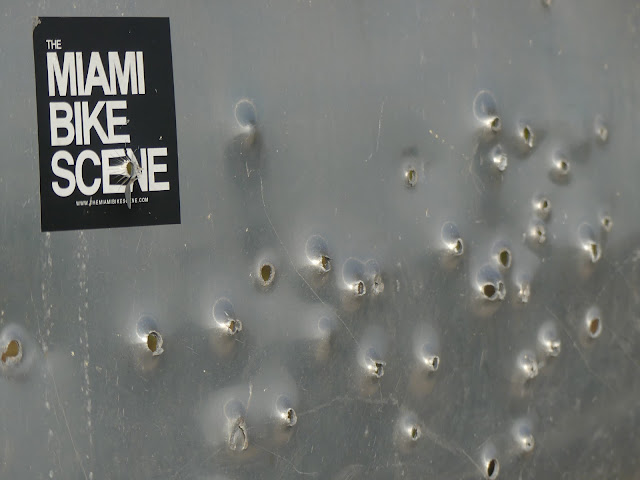 I did once explore up the road that leads north from this point. I went a few miles up before giving up and going back to Card Sound Road. I believe if followed all the way it will come out by the speedway stadium in Homestead. 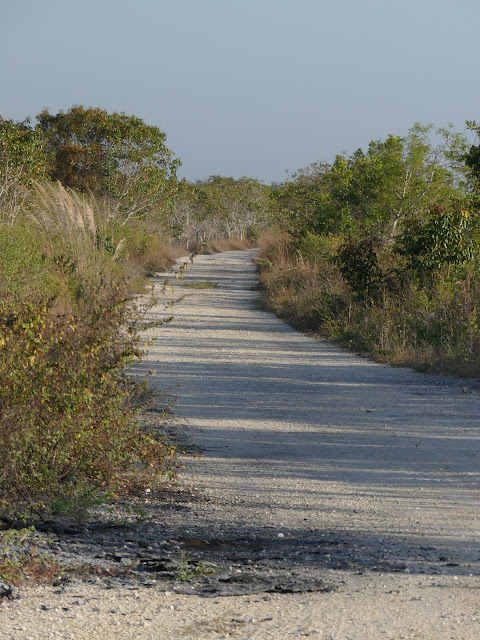 This is the alternative route home, Card Sound Road on Key Largo which joins Highway One in Florida City to the north and in Key Largo to the south at the end of the 18 mile stretch. 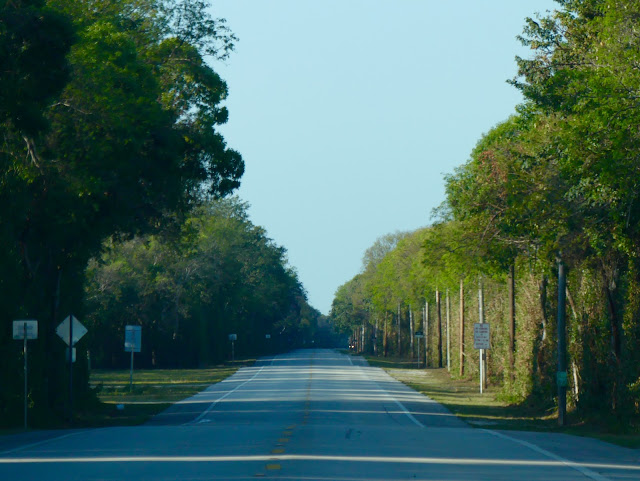 A peaceful 55mph drive before rejoining the cut and thrust of Spring Break Highway One.
Posted by Conchscooter at 12:00 AM 3 comments: