I left my house shuttered and as secure as possible with my car parked at the top of the hill under the house and my Bonneville motorcycle snug in front of it. My hill top driveway is by Keys standards a good long way above sea level so much so my neighbor wants to park his car alongside mine for the duration. No problem I said, as you do. 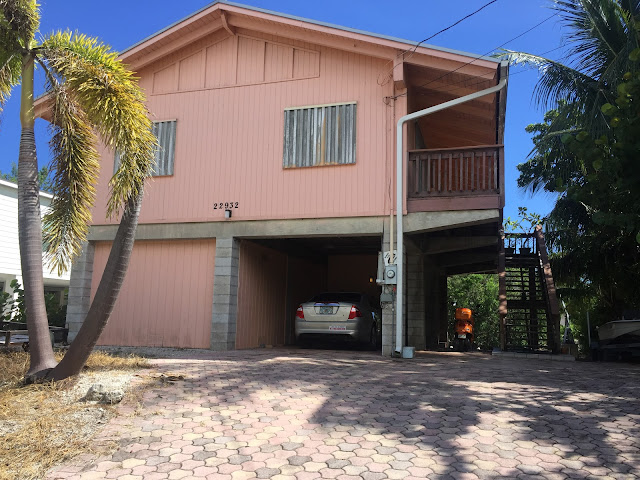 The worry now is that with winds from this monstrous hurricane aiming somewhere between Miami and Marathon the hurricane will bring huge sea surge, more saltwater than was pushed ashore by Hurricane Wilma in 2005 so everyone who remembers is freaked out and those who don't remember are picking up the vibe from those of us who were there.

City of Key West picture
No one likes living inside a house with hurricane shutters over the windows and if you haven't done it you should to never have to. It's weird, like being in prison as friend said yesterday. Plus you have to have the lights on all day. Plus you plants are all in the living room and your outdoor furniture is piled in the office and you just have to ignore it all. 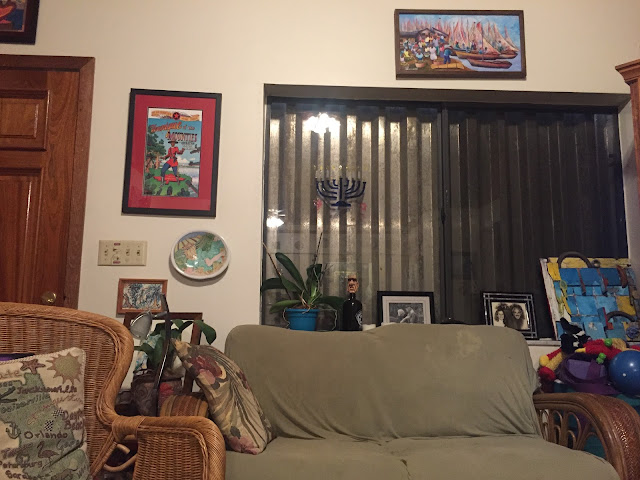 I got up at eleven as usual after a night's work and went into town, 25 miles from my house, to take an exercise class. But first I visited some tourist attractions and took my picture. 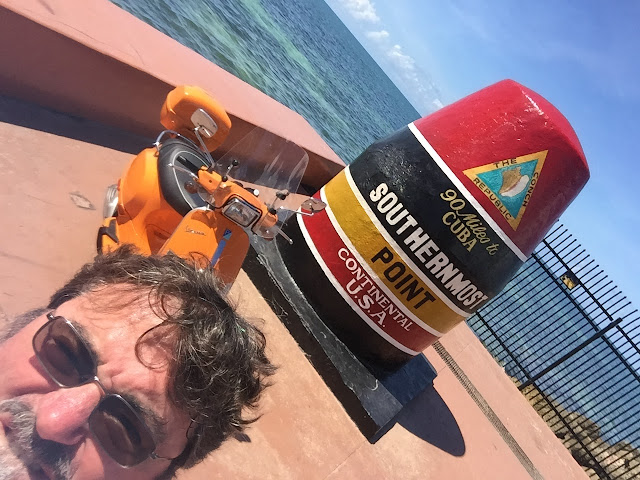 Other locals were there too and I got my picture taken at Mile Marker Zero. 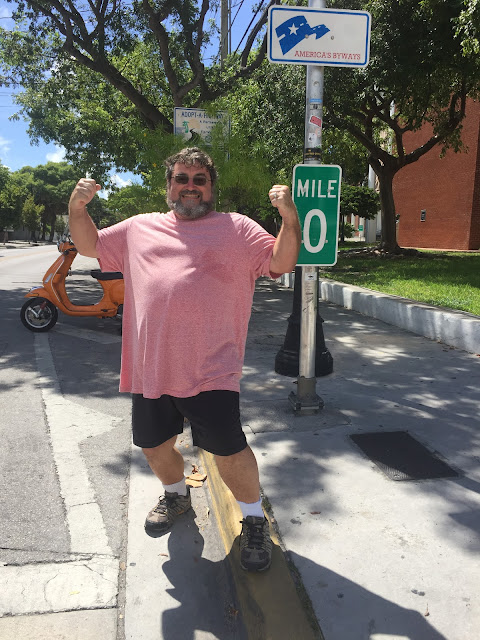 Then I went to exercise and rode home through a deserted town and on a deserted highway. 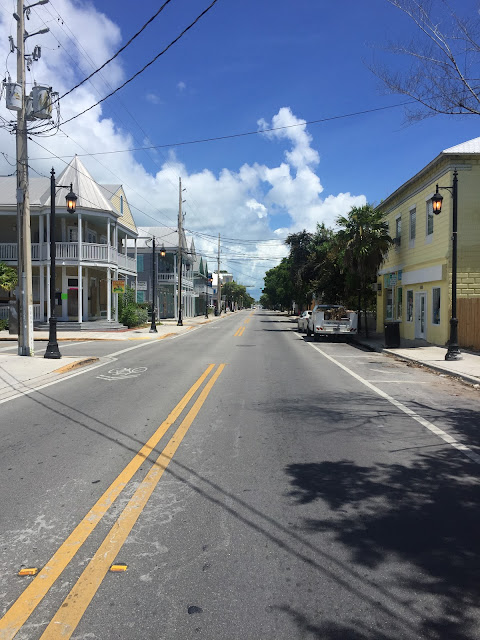 There were a few cars around but it was weird. The highway was a bit of a race course with the few cars on the road speeding like I wish they'd speed on work days. I was ambling along enjoying the day in no hurry and cars hurtled past me like the chariots of hell were on their heels. I was quite impressed by their performance but I stuck to the 55 mph I was enjoying. 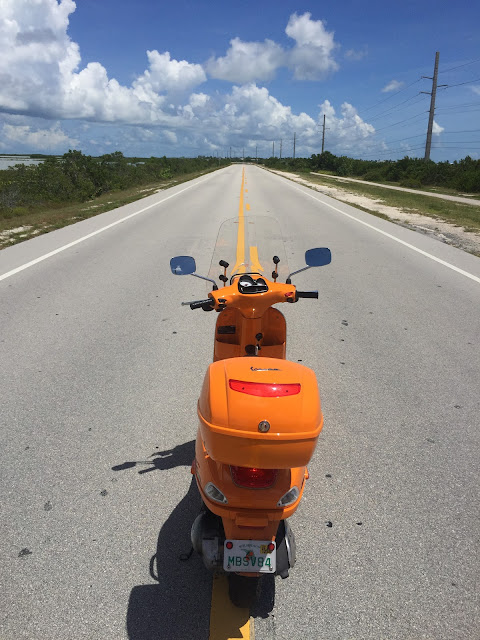 And it was a gorgeous day in every respect. A light breeze bright sunshine and puffy clouds. My chores were done and I went for a swim in the canal. By the time my fingers were wrinkly I went upstairs to brew some tea and settled into my rocking chair for an hour drying off in the shade. Then I took a nap. I realized a hurricane watch was declared but I decided to enjoy my day on my own time and it was perfect. 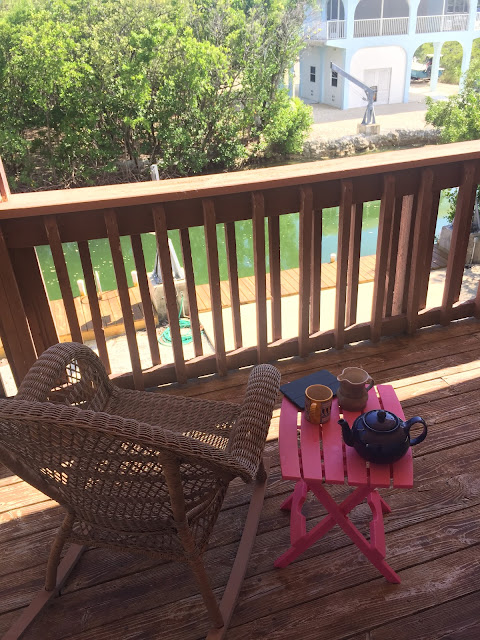 The storm has been marked as heading toward Miami but there is a lot of concern it could head closer to Key West but as far as I'm concerned what is, is. I'm slated to work and this opportunity to be home, in a silent neighborhood with no one to please but myself was fantastic. I put Mozart on the phone speaker and it was so quiet I could swim and hum along to the phone sitting on the deck above my head. 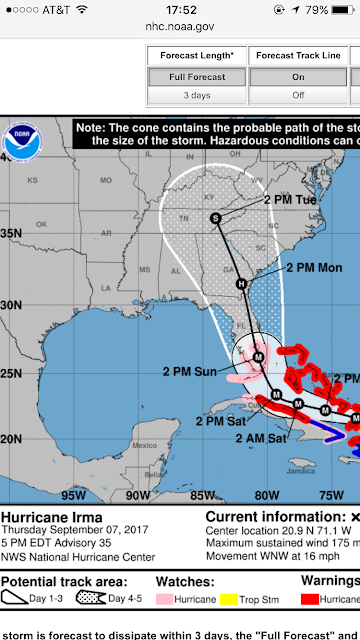 Of course I had a glitch. I did my laundry and set my uniform to dry on the balcony with a nice crease in the pants as the brass will be out in force at work. I woke from my nap to the sounds of a  downpour and I suddenly remembered my pants and polo shirt drying outside. Too late! I put them in the dryer while I showered and they were still nice and damp. Nothing a  brisk ride to work wouldn't dry ( though the collar is still damp three hours later). I buttoned up the shutters on the door and noticed my last pair of pink Crocs sitting forlornly outside the now impenetrable house. So I tossed them in the car on my way to the Vespa. 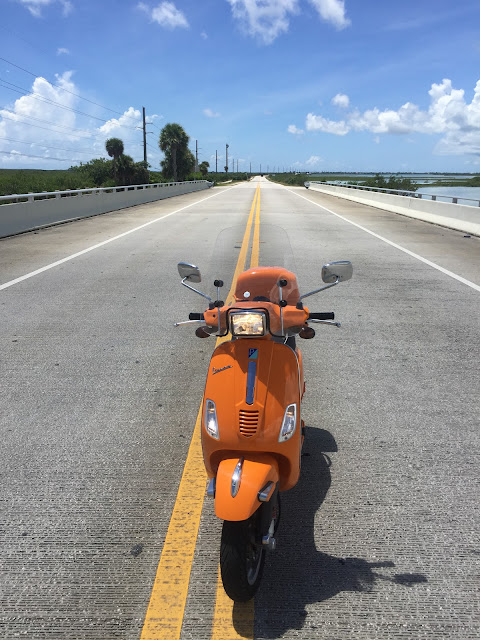 The Vespa is a great tool for this kind of situation and it would be better had I remembered to fill a five gallon jug of gas so I could refuel at home...But it will be easy to park in a semi-protected spot at work, it will dodge debris lying in the road after the storm (if it doesn't drown) and it's fun to ride on empty roads in glorious sunshine. 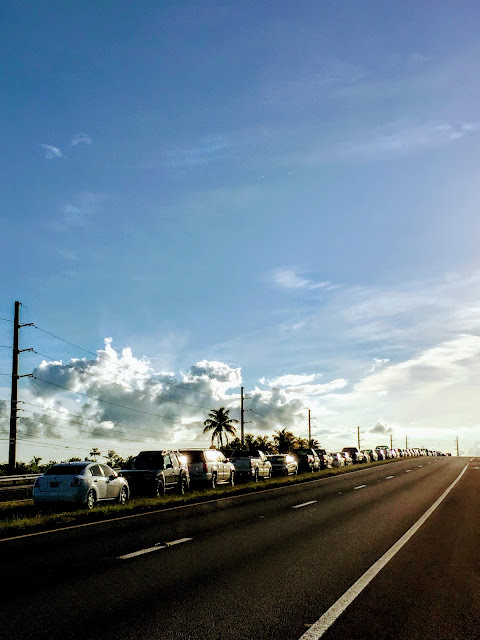 The cars strung out on high ground have multiplied in number along the Overseas Highway. This lot are parked on the hump over the entrance to the Boca Chica Navy Base. Who knows it may be a great idea! That's the thing about hurricanes: everyone pretends there's a science to survival but its all blind luck. 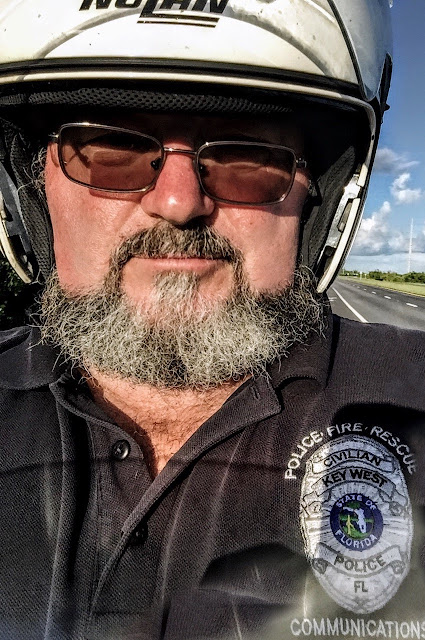 North Roosevelt Boulevard was deserted for long minutes as I rode into Key West shortly before seven yesterday evening. The scene was eerie along the main road into town: 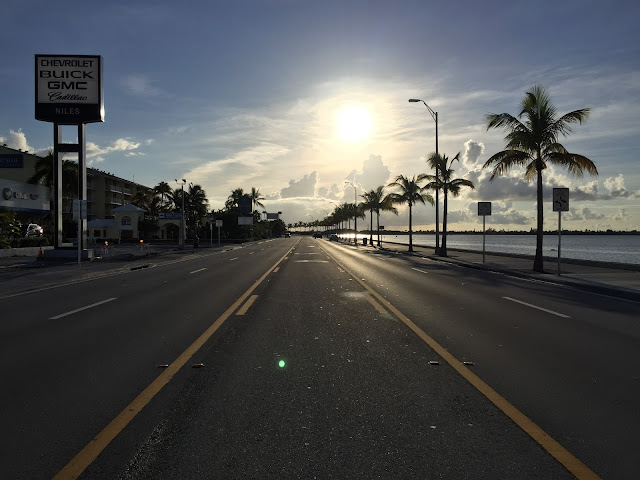 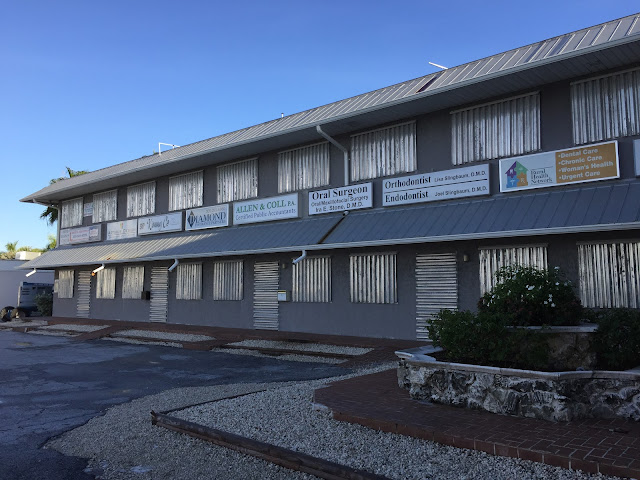 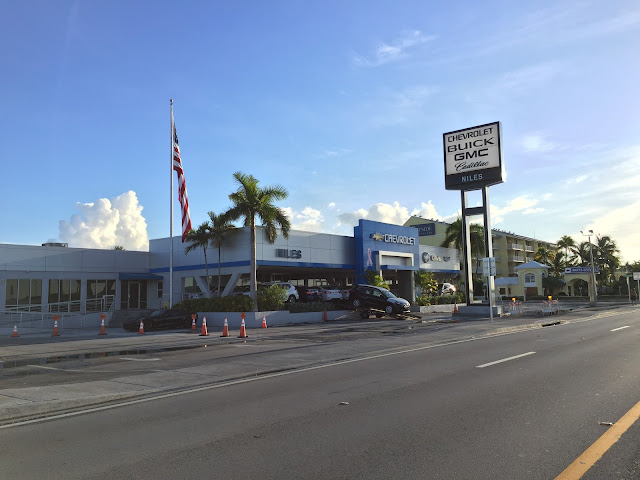 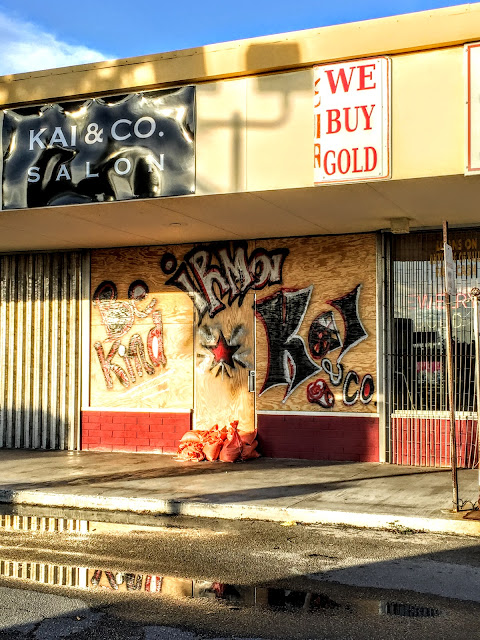 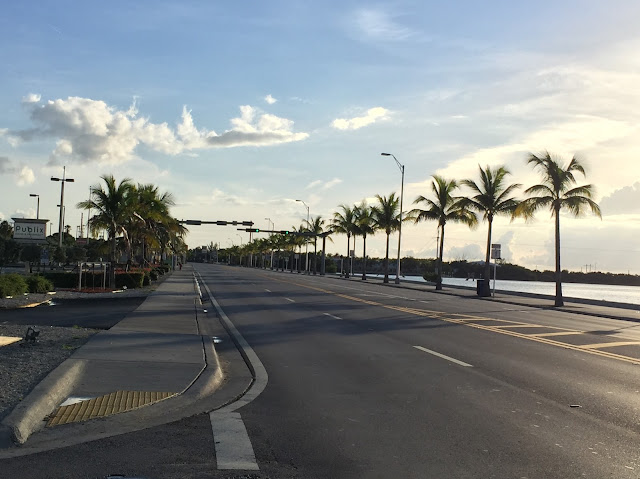 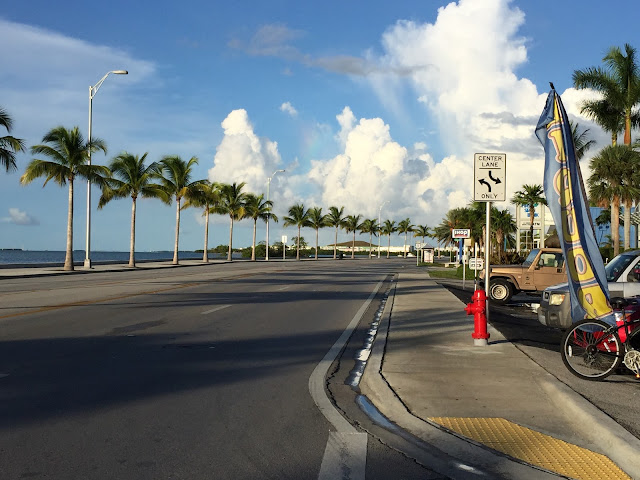 And when I got to work Nick and I took over from Keith and Kristi who are covering days shift. Then the captain gave me the great news. 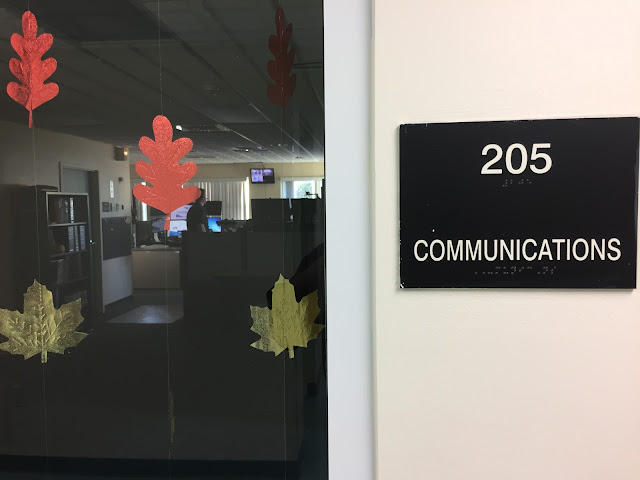 Winds are not expected Friday so I get to go home and Do IT All Again! Fantastic! This time I'll lock my Crocs safely in the house when I leave for work not expecting to return.
Posted by Conchscooter at 12:00 AM 9 comments: