Layne laughed at me when I complained my feet were sore and I was exhausted from all the faffing around getting stuff and loading stuff and cleaning stuff. “Wow,” she said. “This used to be just another day of getting stuff done.”  I’m retired now and mooning around walking my dog and making photos is more my speed. I got no mercy. We spent the morning doing laundry including rugs and seat covers and Rusty’s bed. The security guard at the truck stop made the point that deserts are cold at night. 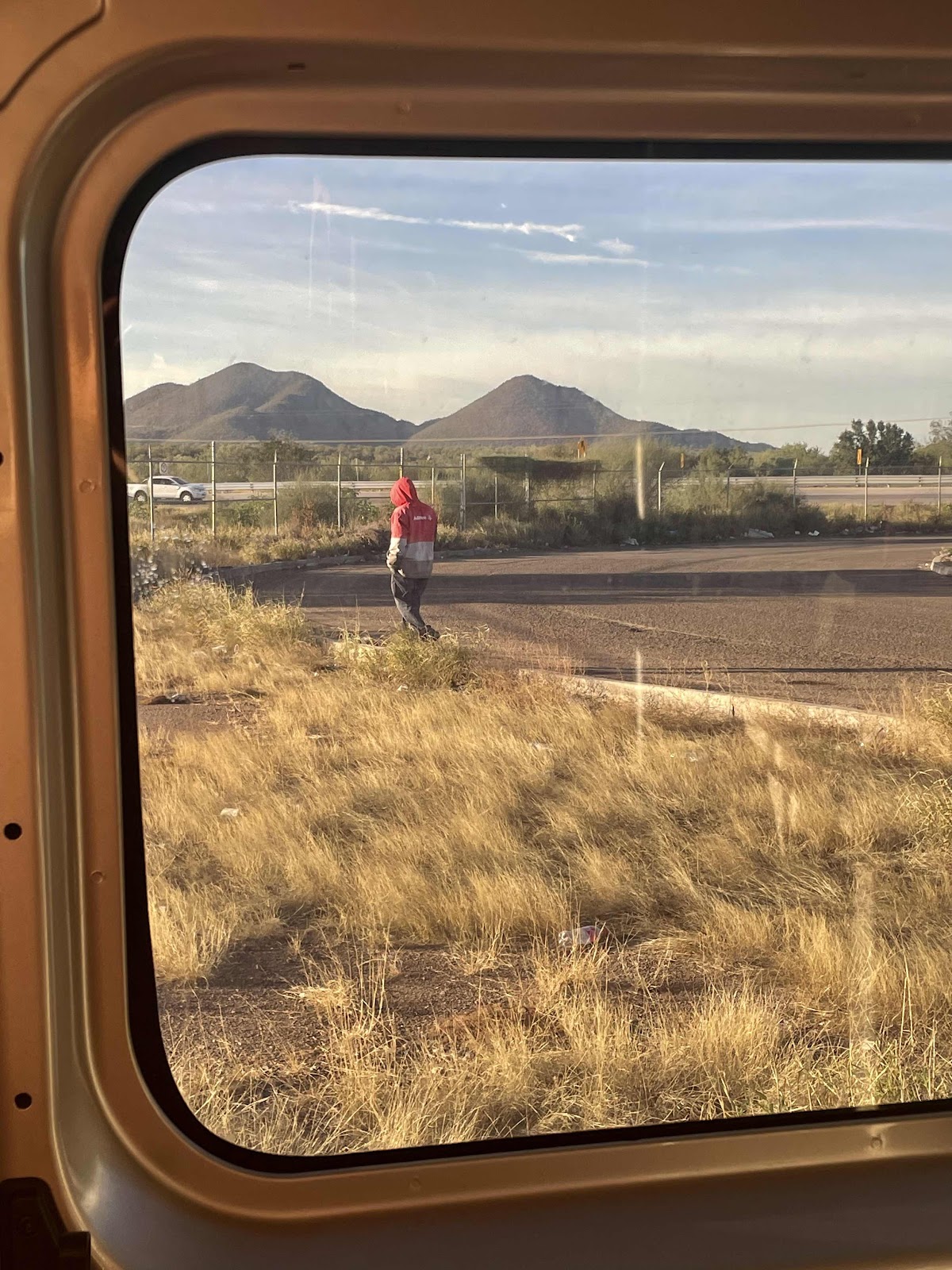 Layne spotted a military patrol taking a break at the truck stop as we vacuumed and swept GANNET2 and I rubbed the van cabin with Armorall to restore shiny black plastic. We’ve driven through four police checkpoints so far and never been stopped. Despite all talk of violence in Mexico we have seen nothing like that around here. 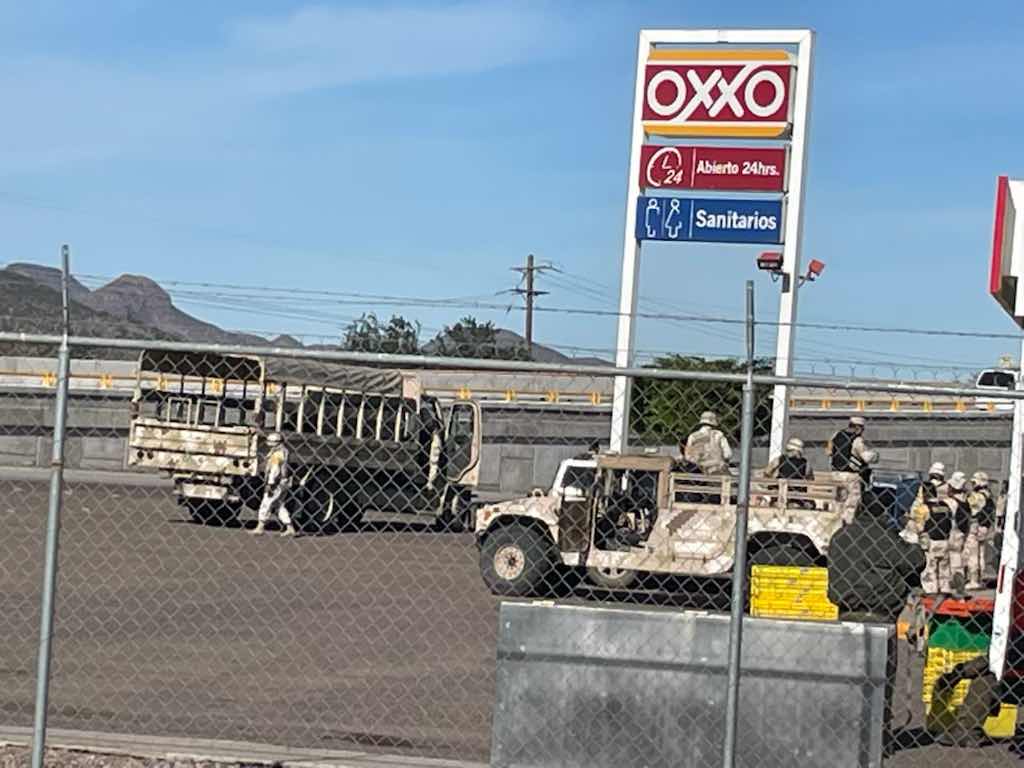 Our first chore was to fill our water tank. We had about five gallons left in our thirty five gallon tank so we returned to the original purified water store to refill. First we stopped by Home Depot so I could buy two meters (6 feet) of 3/4 inch food grade hose. They sell five gallon jugs of water for 75 cents (15 pesos) per jug. Mexicans themselves like to drink purified water do what they do is buy an empty jug and exchange it for a full one. We simply park and empty the jugs directly into our tank. It’s easy and inexpensive. 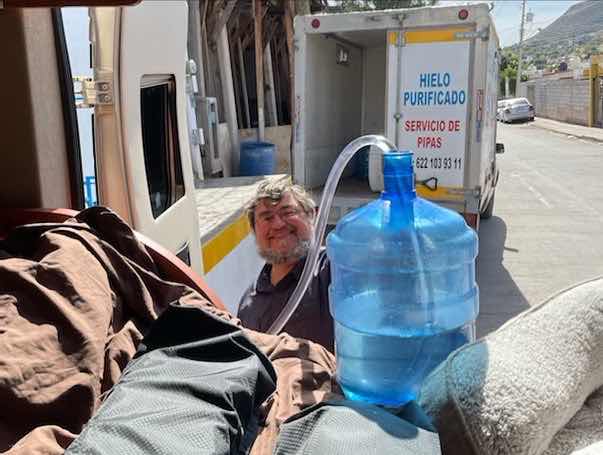 Bruce in Arizona had texted me suggesting a siphon hose. Not having anything so sophisticated I figured a simple length of hose would work. It did and it was easy. We still filter our drinking water through our Berkey filter but having purified water in the tank is one extra step in keeping life simple. We loaded thirty gallons for $4.50 with no effort and not too much spillage. 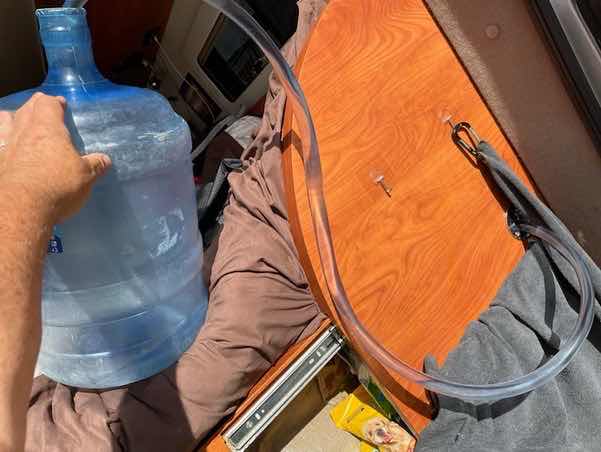 Layne was watching the youngsters at the store having a good day at work. 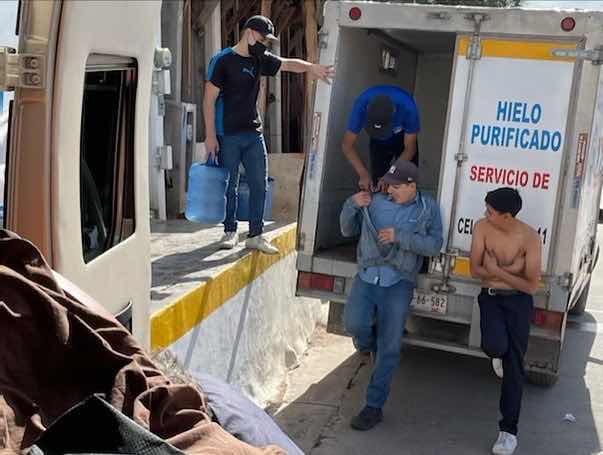 Lunch was next and with a slew of positive reviews on Google maps for this place: 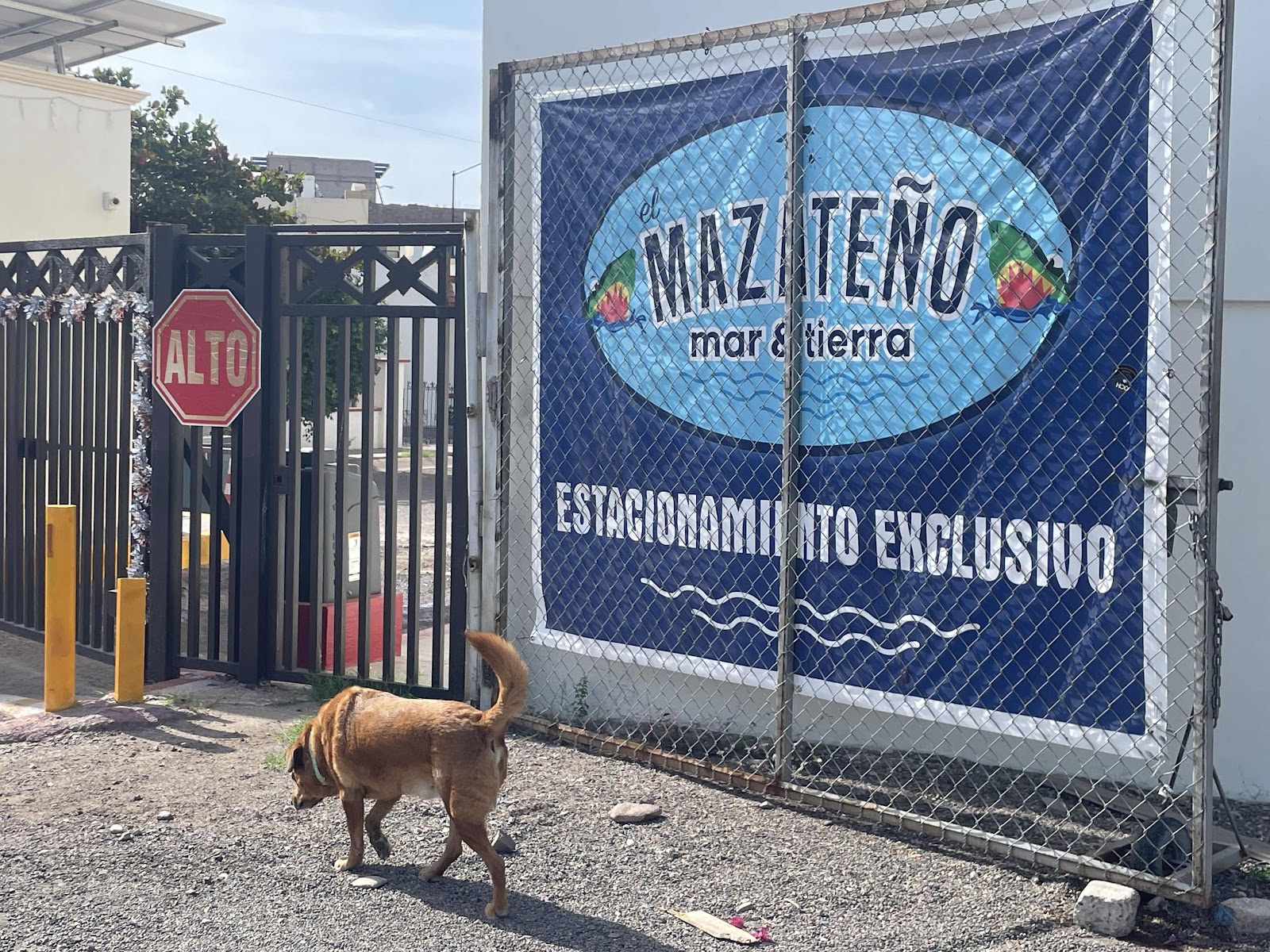 We had four different tacos which we shared and each had a cooling glass of horchata (rice water, a traditional sweet drink). 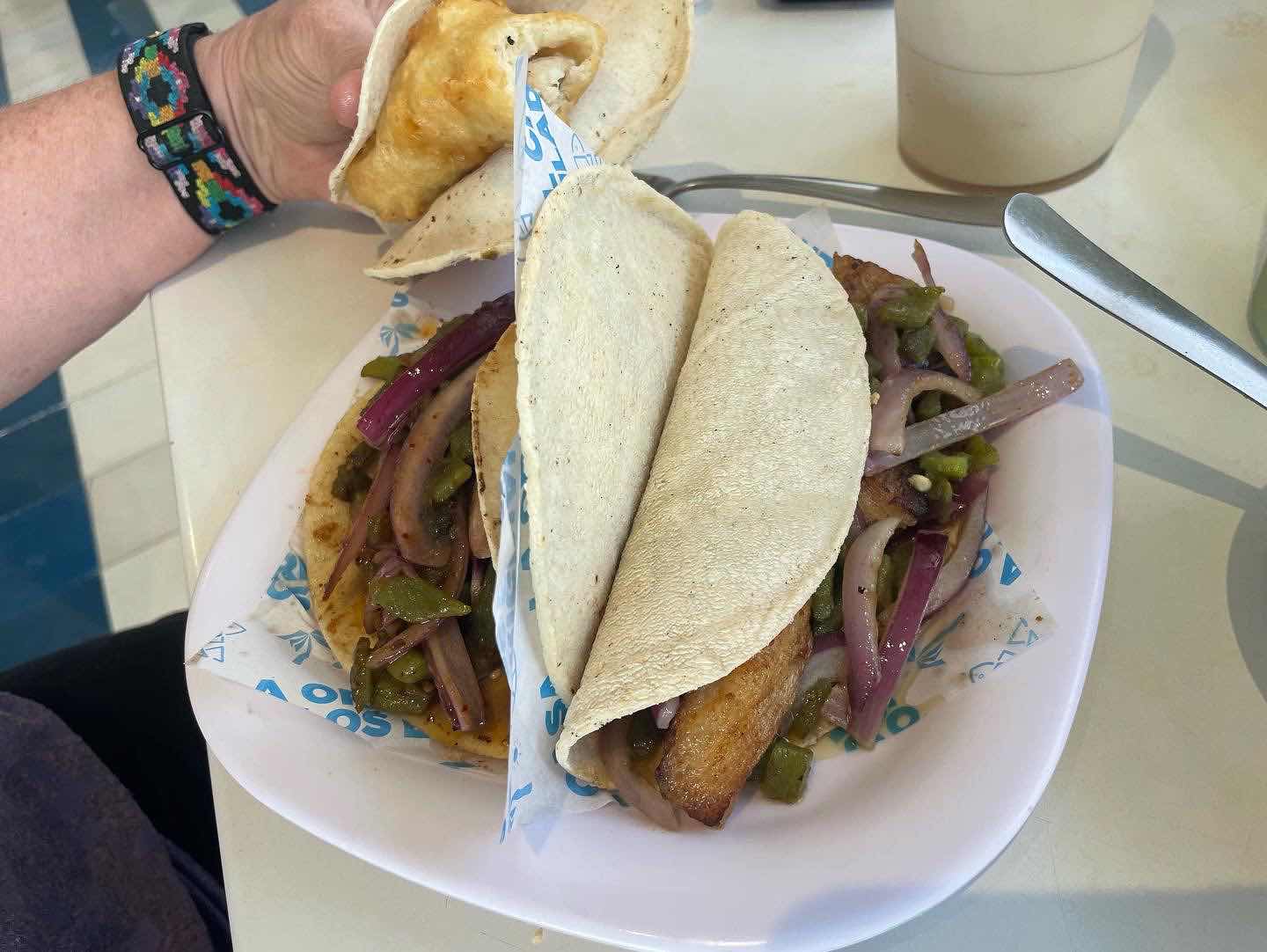 The whole bill including a tip came to ten bucks. We were stuffed and skipped dinner as a consequence. 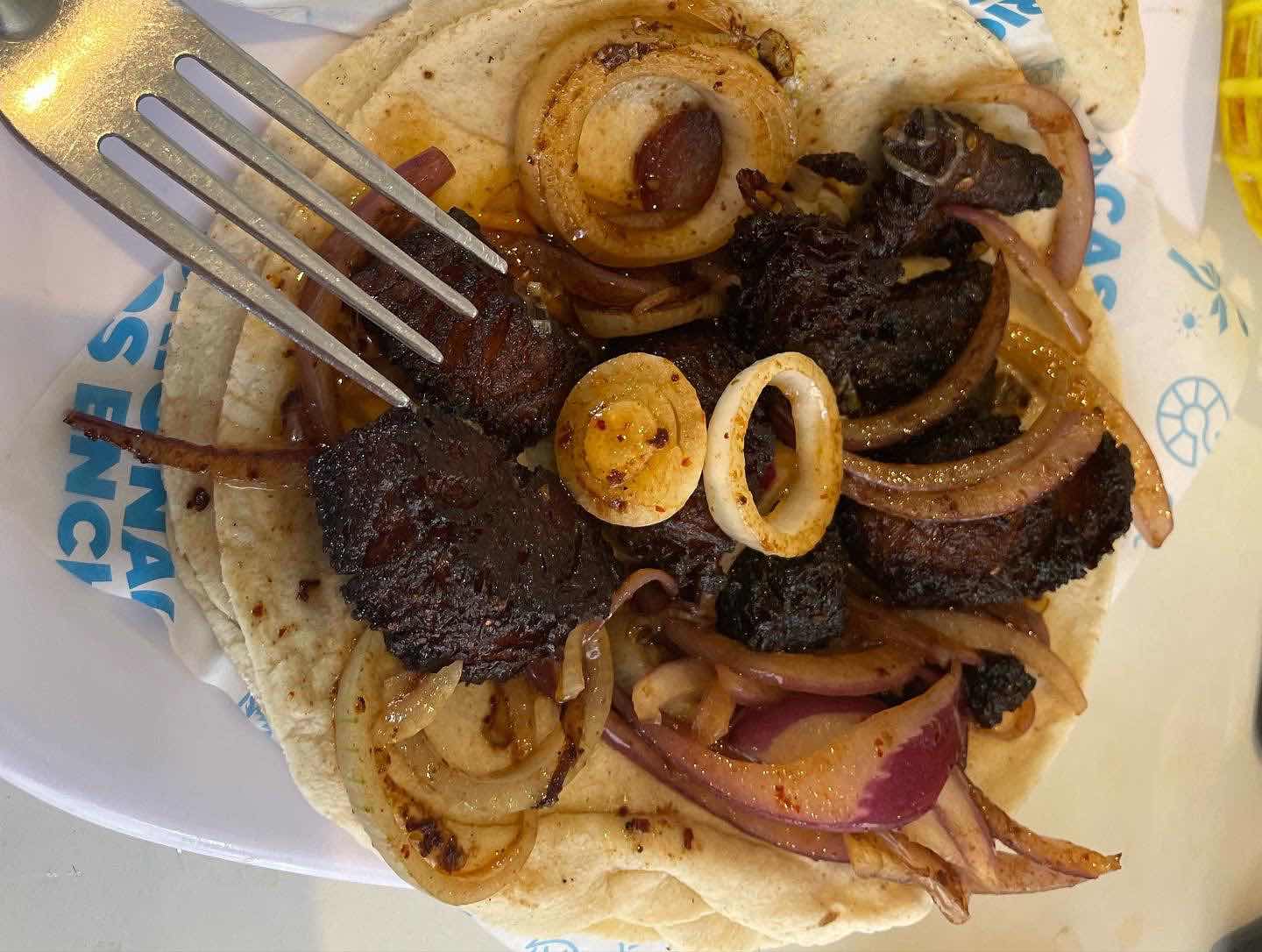 Then we went back to Walmart where we managed to carry out the entry requirements without too much chaos. Hold out the back of your hand to have your temperature taken, walk through the disinfectant mat, wash your hands with a foot squirt of sanitizer. Everyone wears  masks, no question. 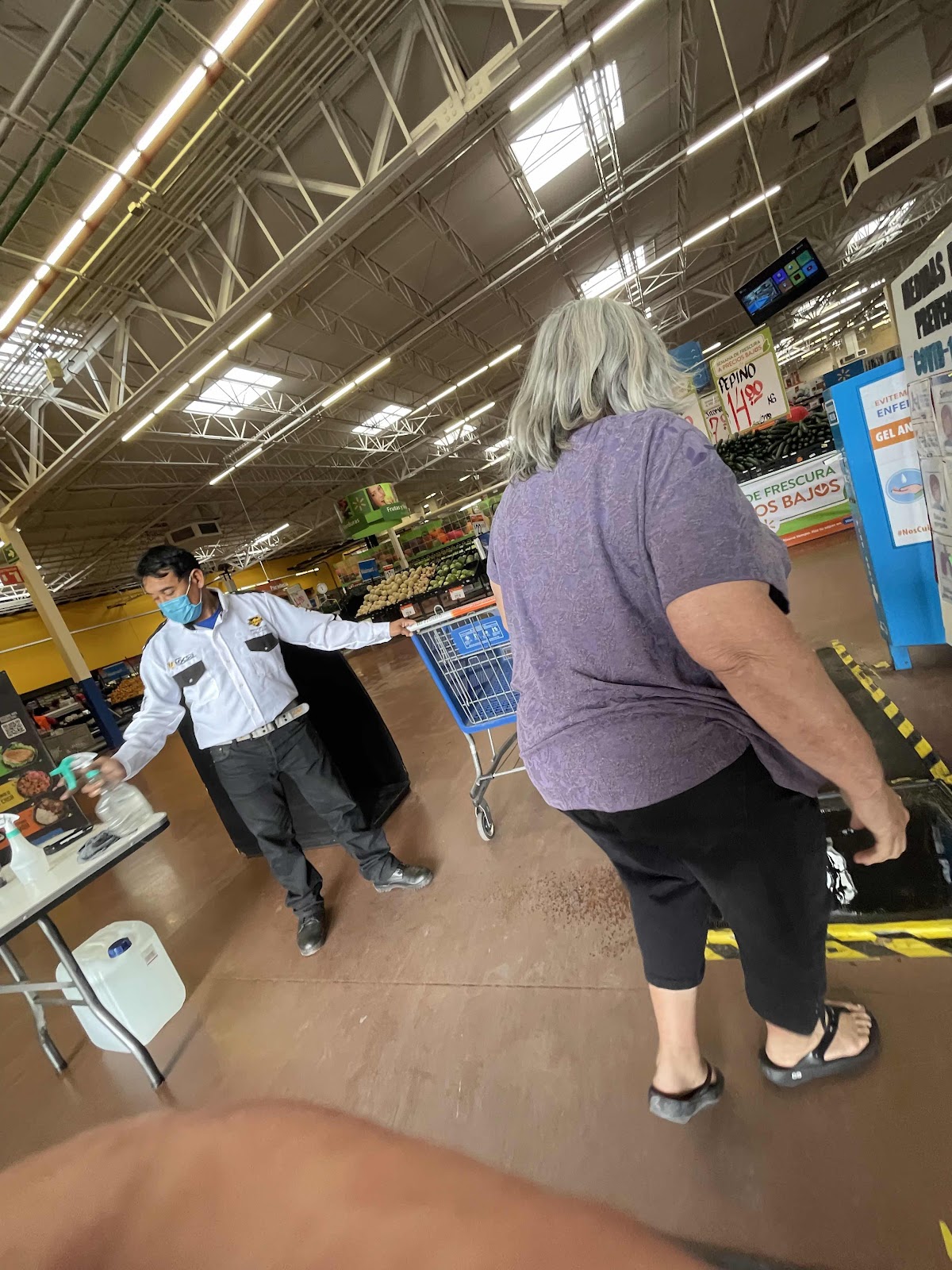 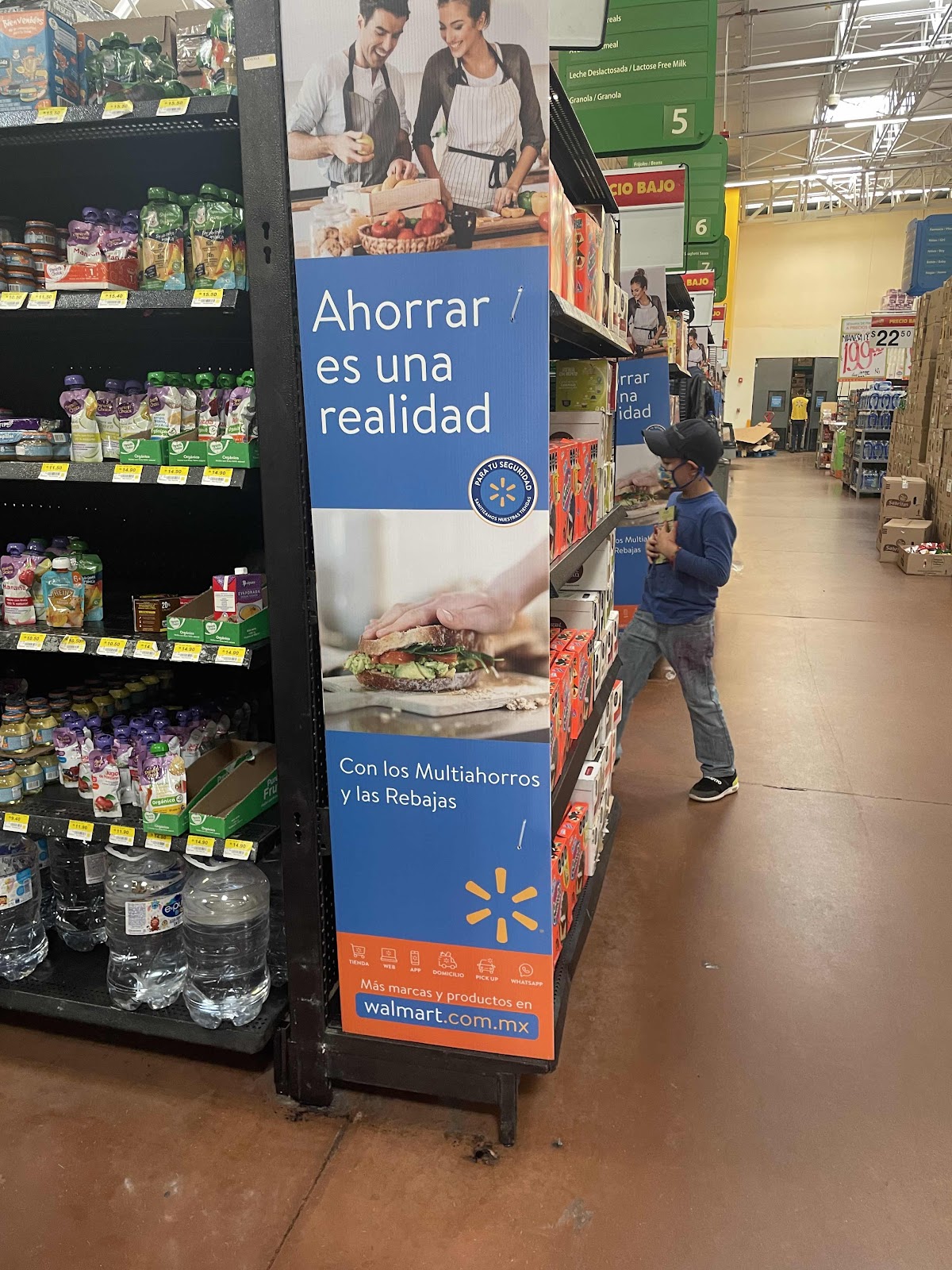 The range of people shopping this supermarket will sink your Mexican preconceptions. This field worker doesn’t belong…or does he? 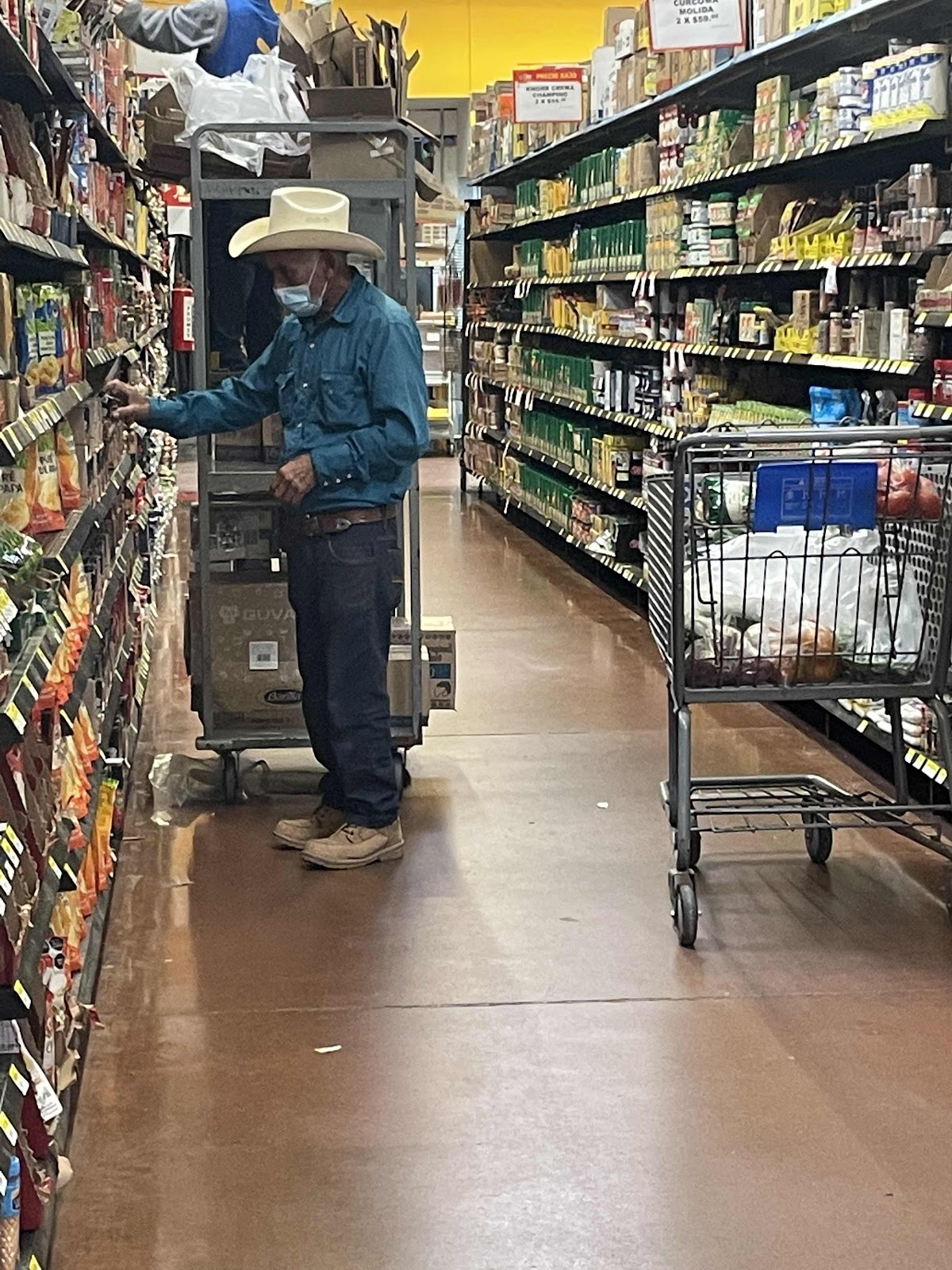 I will confess that getting the 21 foot Promaster 3500 extended into Mexican sized parking spaces can be a bit of a chore. There are lots of American full sized trucks and SUVs on the streets but there are also tons of very small cars that you will never see in the US, models from manufacturers you recognize and from others you won’t - lots of Peugeots and Renaults and the like. The van dwarfs them and usually I get more respect than you expect. 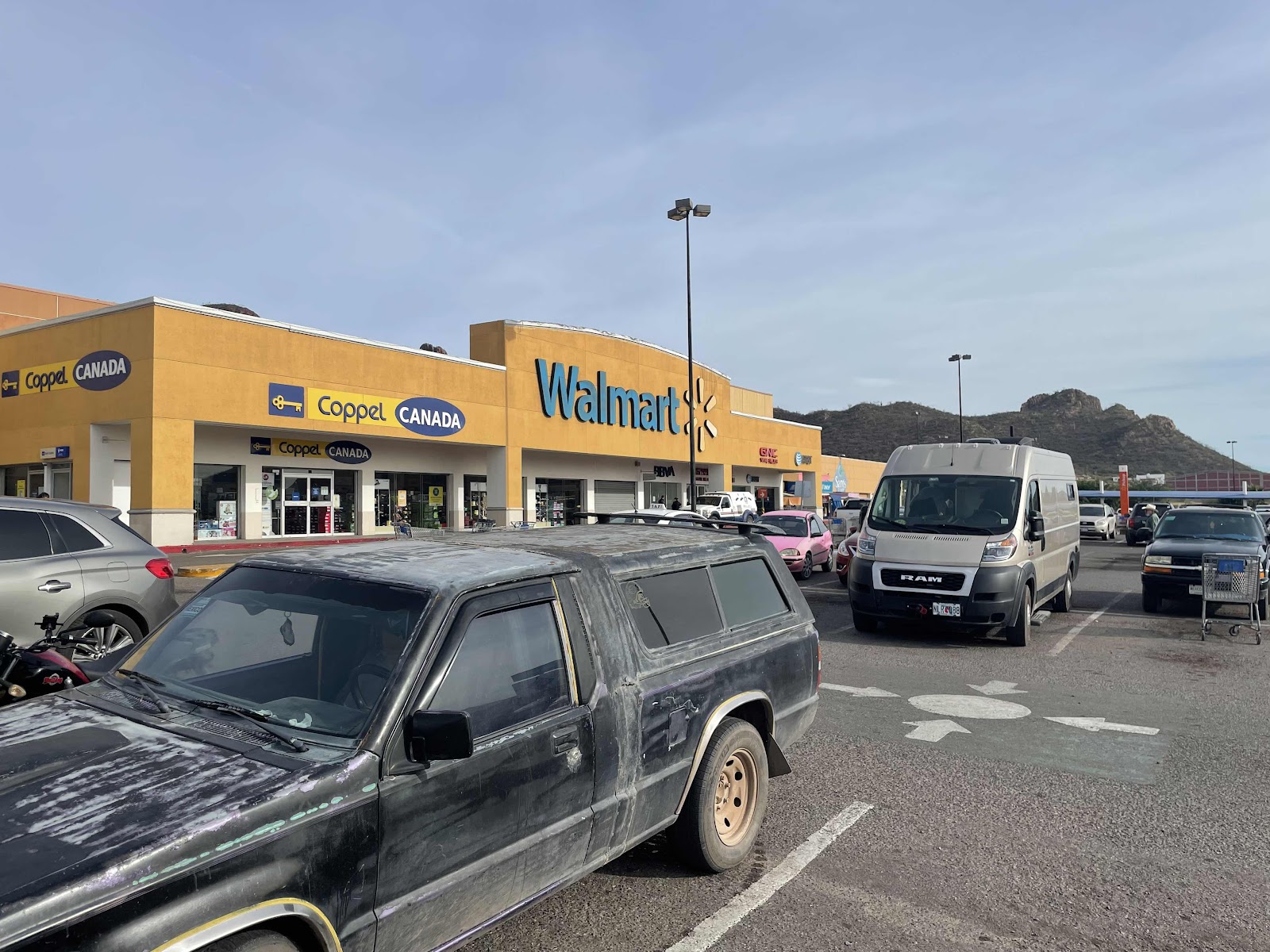 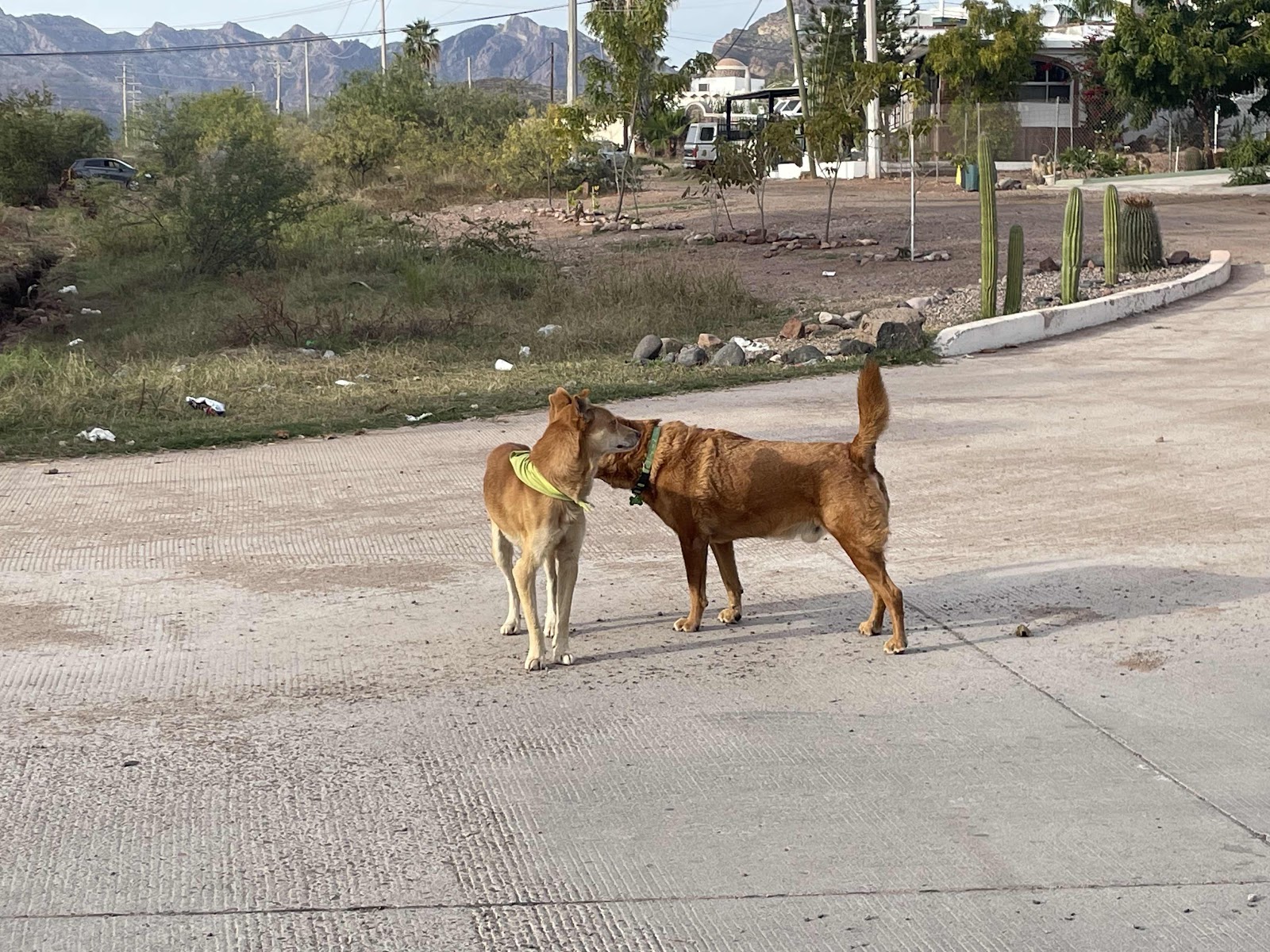 Layne got her fifty dollar teeth cleaning by an English speaking dentist who trained in Tucson, meanwhile Rusty and I went for a walk and he met a local. 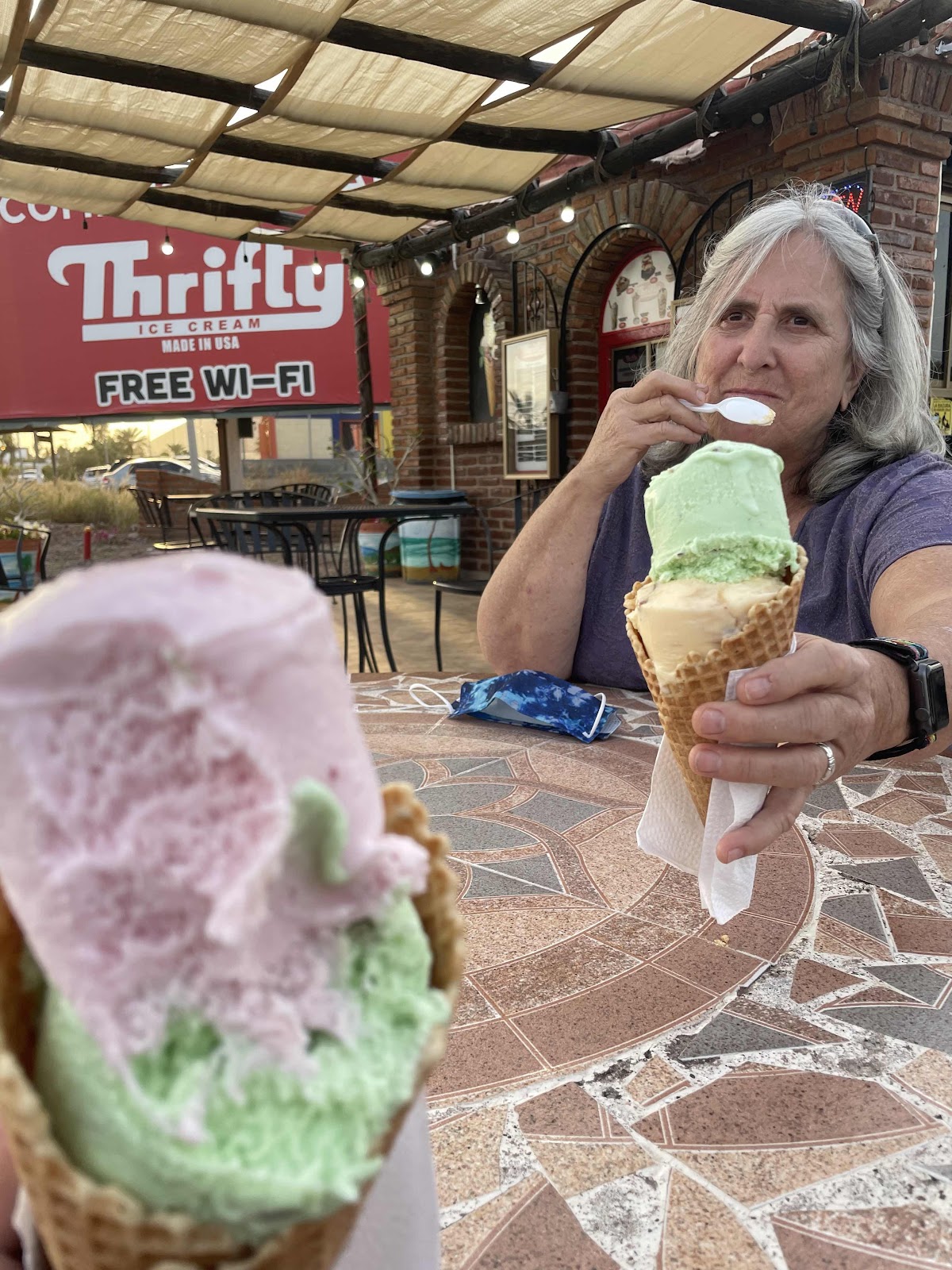 After the tooth cleaning done sugar was in order apparently and we ate ice creams almost as expensive as lunch! A rare treat and much enjoyed. Rusty preferred my pistachio cone to Laynes butter pecan I think. 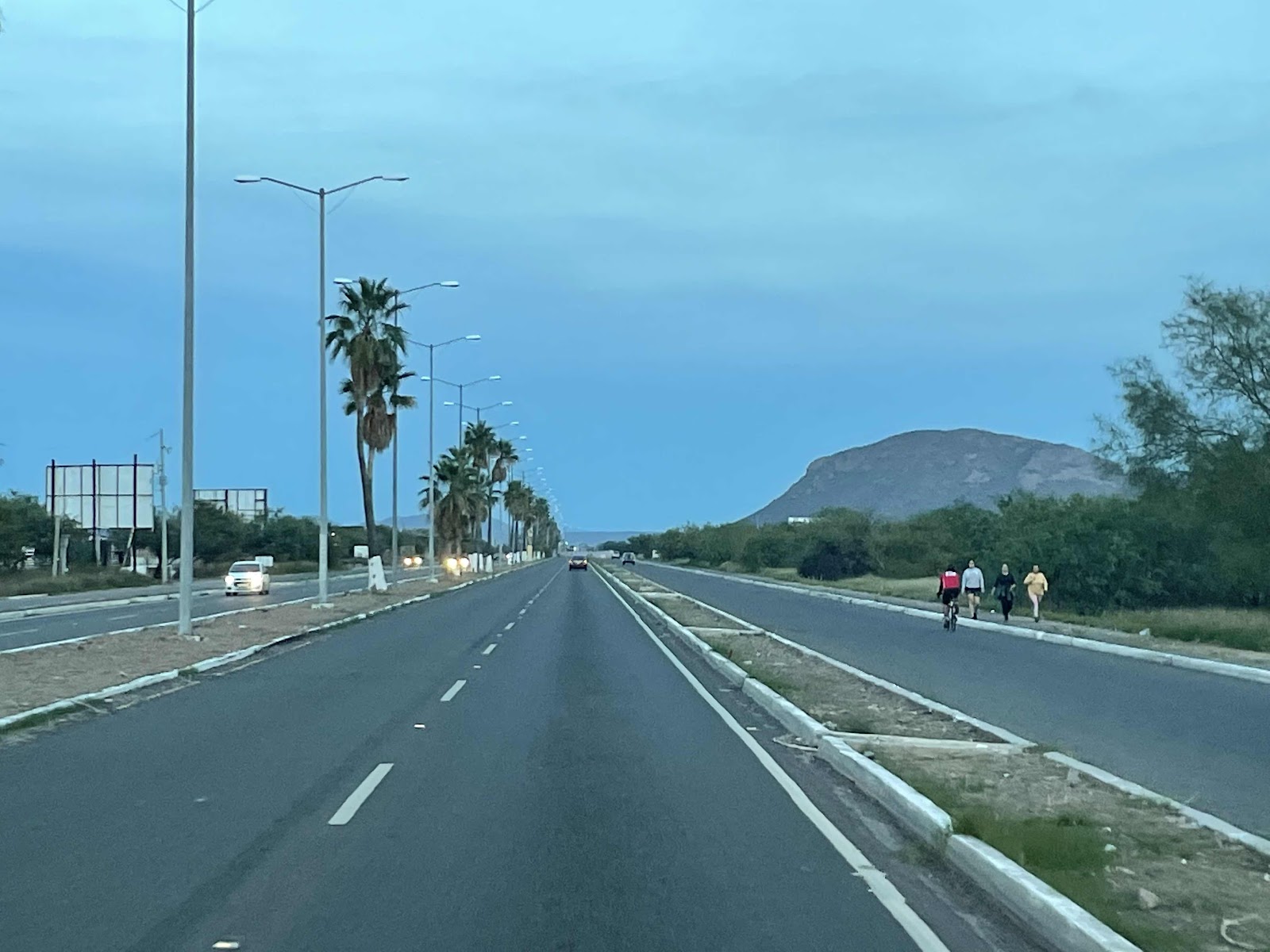 Then back to the truck stop with all chores done and a chance to rest in preparation for our drive south to Alamos.
How was your Monday? Equally frenetic? I hope not.
Posted by Conchscooter at 2:00 AM No comments: