To assemble this collection of pictures I pushed my rolling walker for  56 minutes. I paused and sat down twice for a total of perhaps five minutes. I was sweating and desperately  tired by the end but I got the job done.  I will say I was rather proud of myself. 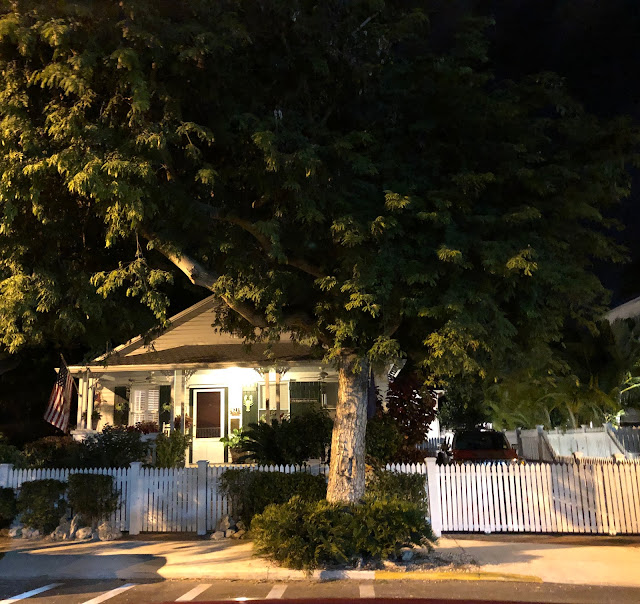 I started from in front of the old Harris School on Southard Street. I wrote an essay on it ten years ago, Link Here and since then it has been proposed for various things, none of which panned out and the last tie I looked it was on the market for $17 million as I recall. It seems to be continuing in  its state of suspended animation, a repository for many memories among people who went to school here decades ago. Now its a pay parking lot. Too bad. 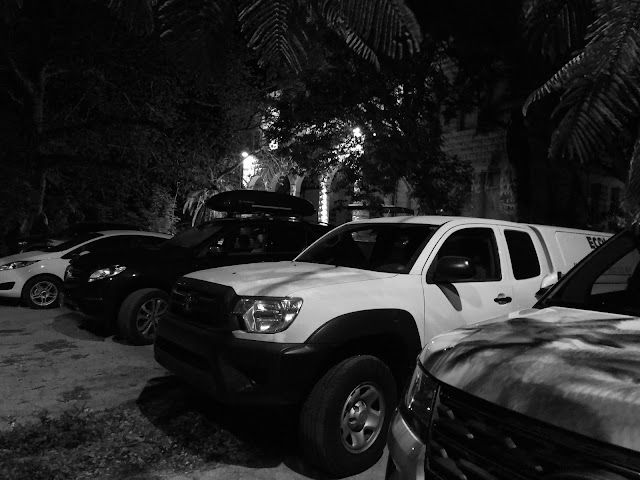 Rusty was ambling under his own steam and in between keeping an eye on him, which he doesn't much need as he spends a lot of time keeping an on me his very own cripple, I snap a picture or two of something that catches my eye. 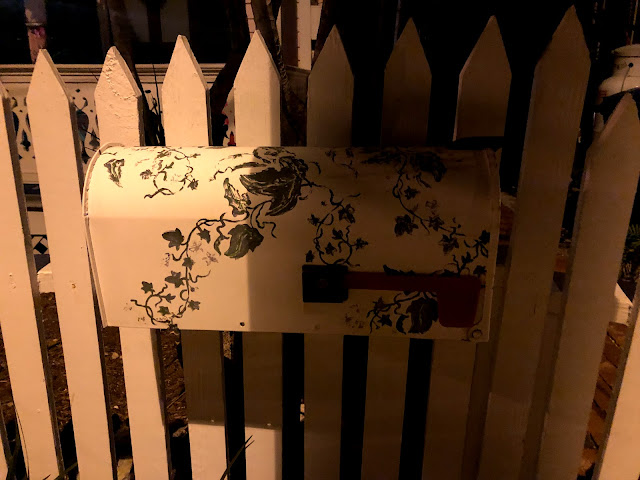 After all this time and tens of thousands of pictures I am as enamored as ever of Key West's streets, whose details are always fresh to me, always worth trying to capture one more time in pixel form. Just like my dog who never seems to run out of scents to sniff. 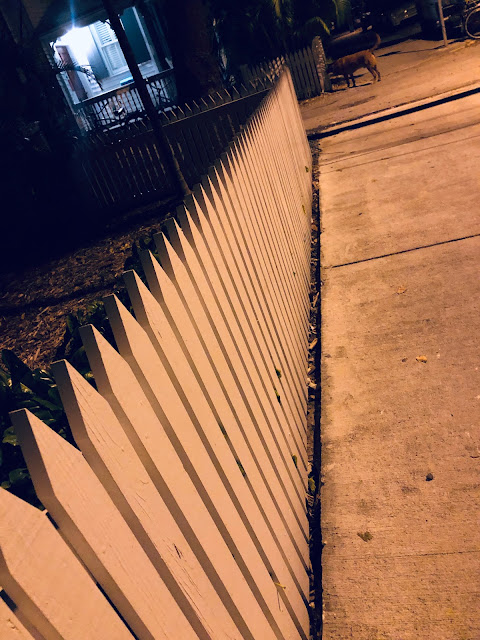 I have to force myself to remember that much of North America isn't anything like this, our arrow streets, overhanging trees, no advertising or neon visible, the sight of a well used commuter tricycle not looking the least bit out of place. 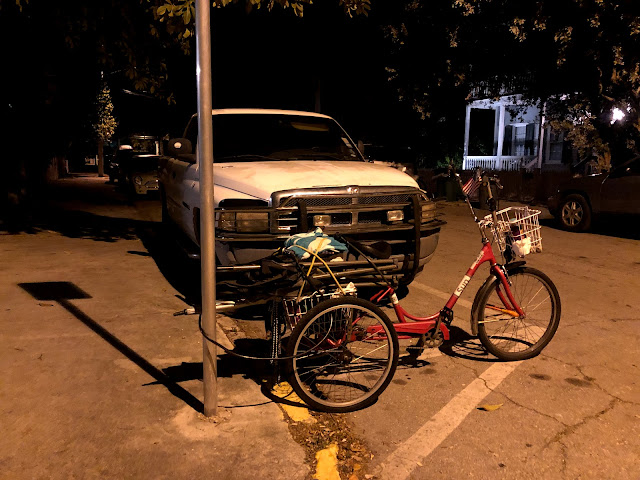 These homes, often renovated by the influx of big money these past twenty years look exactly as you'd expect Key West to look. And I still get pleasure from the shapes and angles and shadows and pastel colors. Ceilings are traditionally duck egg blue to ward off insects and spirits or something like that. It's tradition: what more do you need, right? 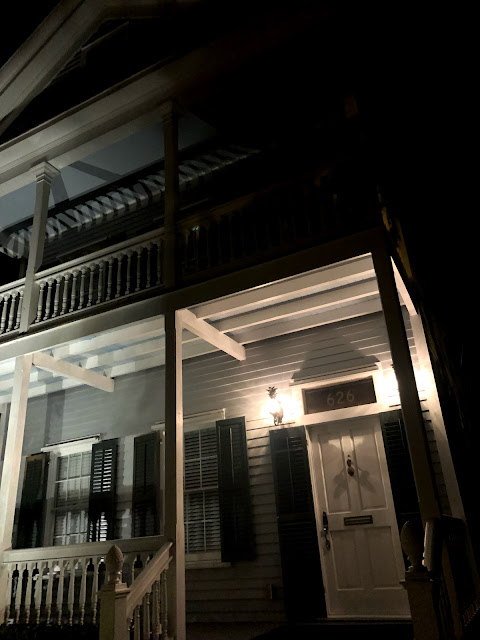 The oddest things strike my eye when I'm out walking with Rusty. A poster at Charlie's grocery seemed odd, touting for Medicaid business at a convenience store seemed weird. I guess I need to broaden my view of what small business needs to do to compete in the age of the gruesome Amazon. 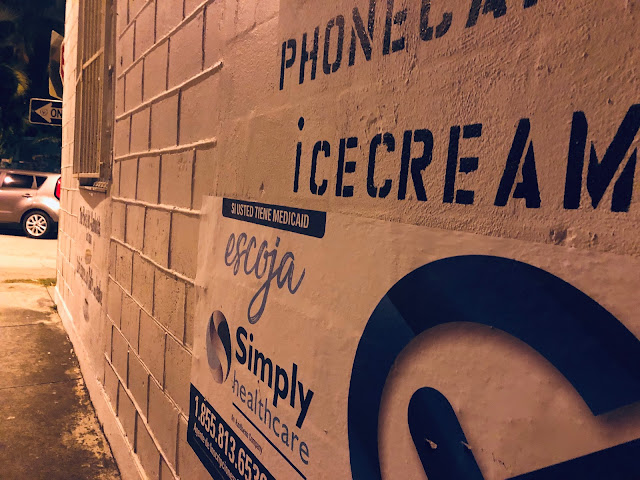 Now you know why the ceiling above the front door is that color in the picture below, and I can in fact report a total absence of ghosts or ectoplasm as we strolled by. It must work. 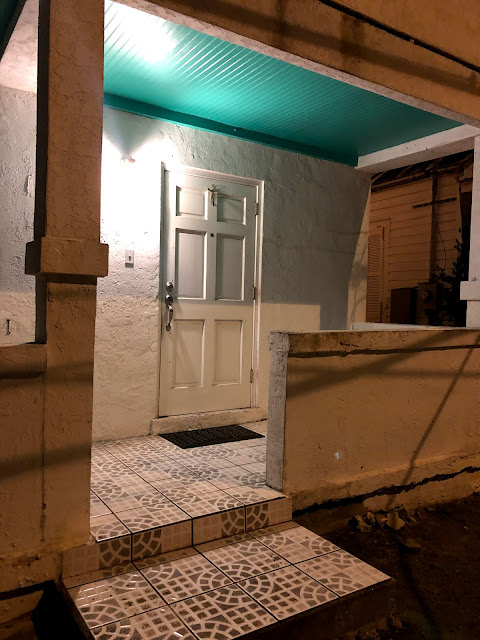 Looking down Galveston Lane toward Bill Butler Park. I get to visit here as often as I like and I am appreciative of that possibility. I've been photographing this lane for a decade and it really never does get boring. 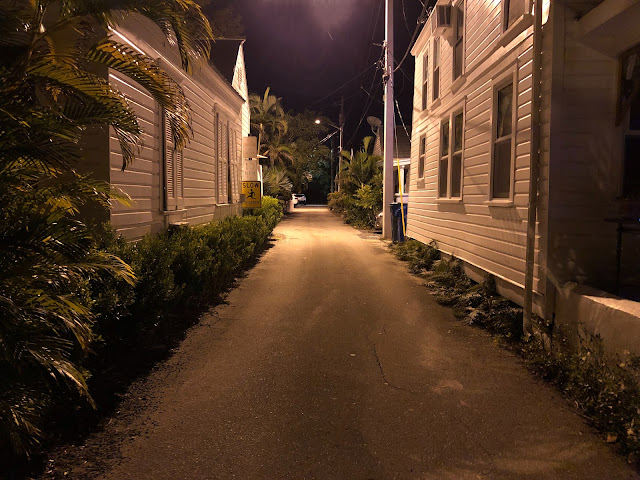 Icicles! As close as I want to get to frigid stuff like that. 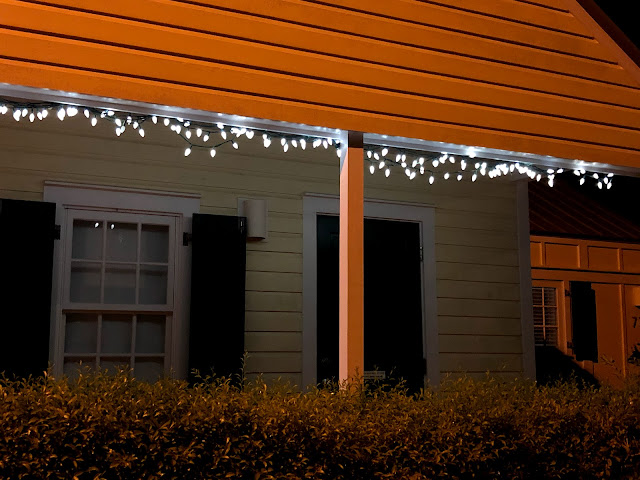 The other side of Bill Butler Park. There's a tiny alley up to the right that connects to Elizabeth Street just short of Angela. And I photographed it in 2009. Of course I did.LINK HERE. 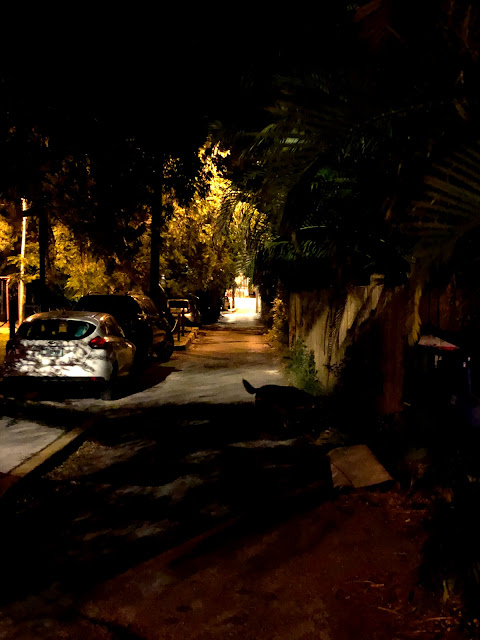 Rusty had almost reach Elizabeth when I took this picture of the gorgeous overgrown garden at the corner. 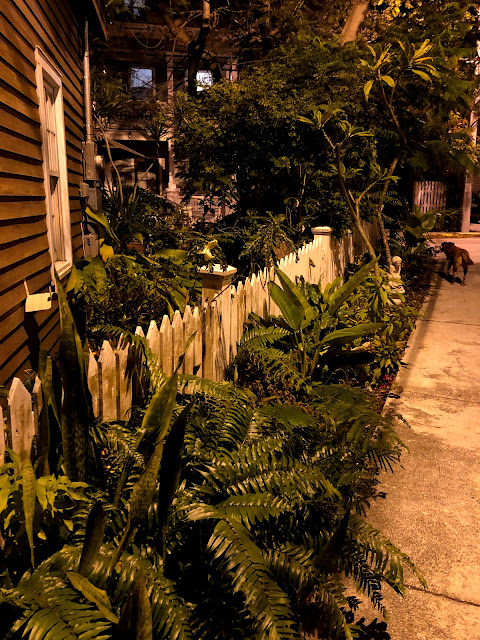 Everywhere you look you see classic Key West architecture. The story goes that ships' carpenters used salvage timber to build homes in the port city, which is supposed to explain the less than symmetrical results. Key West has been through a great deal of commotion since it was founded officially in 1828. In some respects it's amazing the whole city hasn't been repeatedly rebuilt after one calamity or another, fires, hurricanes and the general decrepitude incurred in a wet tropical climate. 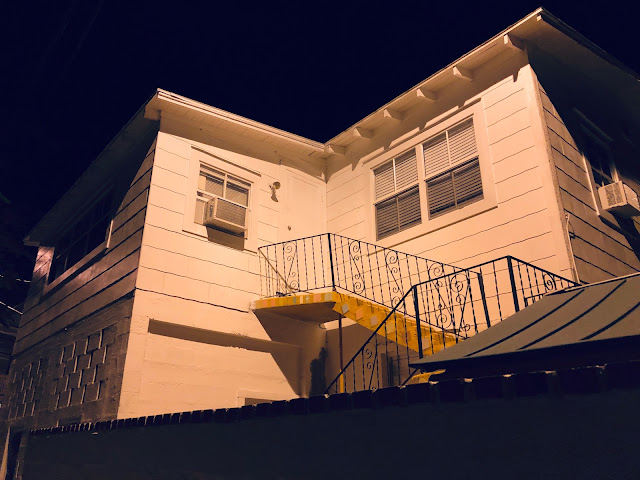 I had Rusty close to me by now, past six o'clock and the city slowly comes to life around that hour as the people who keep the place functioning stir themselves. 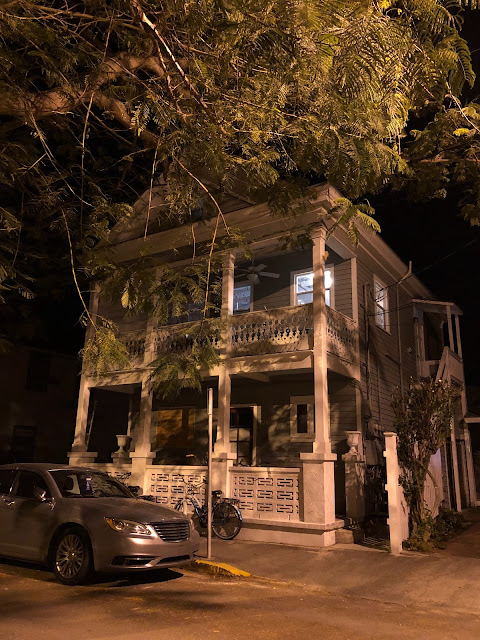 I had one of those "living here" conversations when I allowed myself to be cornered by a nice visitor. In the spirit of the new affable less self conscious me I tried to explain to the bright eyed and bushy tailed tourist what it takes. The best answer I have come up with over the years is to tell people that the best way to find your place in Key West is to give up your ambition. If you can do that you will go a long way to fitting in. It's hard if you were important at home to become another wanna be in this small economic back water. 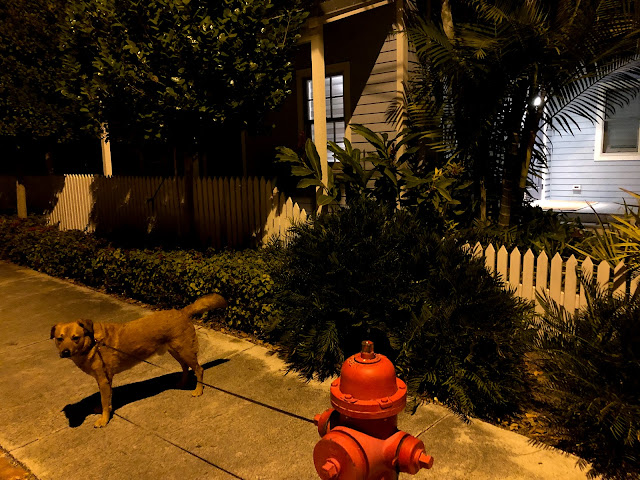 Prices are another thing. What makes Key West so tough is that jobs don't pay in proportion to the cost of housing. I'm starting to understand this is a widespread problem but around here there is only water. In other words you can't commute to a better job or live here and work there in the time honored manner. 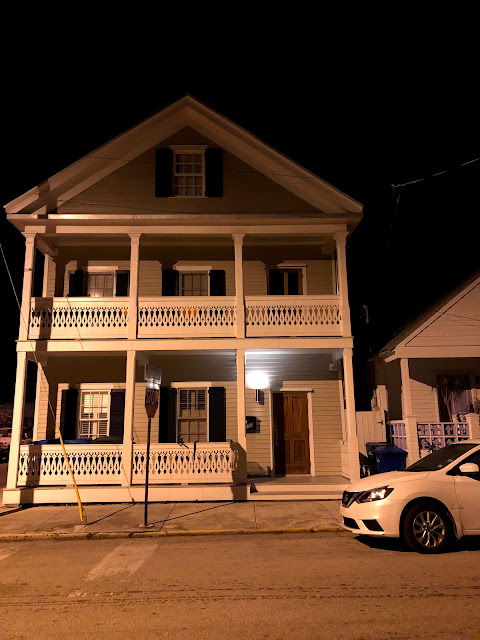 Luckily I like living out of town and my landlord is a really nice character who looks after us as I am not handy. I get to drive to town, work, go to the movies or wander around with my dog checking out these views. 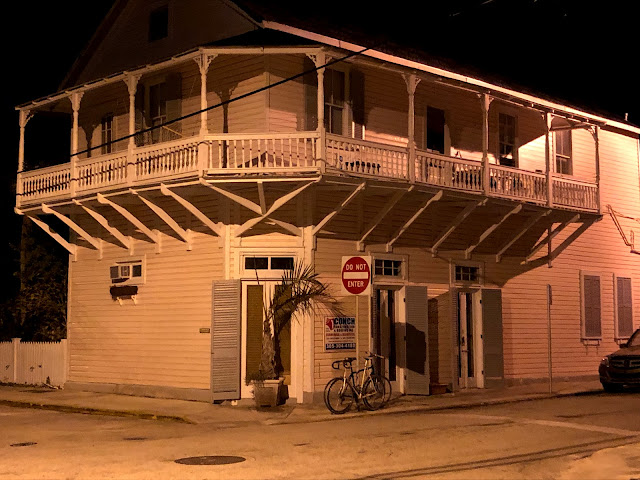 And then it was nearly seven in the morning and as the sun came up I saw the sign at the old school parking lot. No RVs, with an RV parked right behind it. A small one I grant you but a recreational vehicle just the same.  Ten dollars is ten dollars... 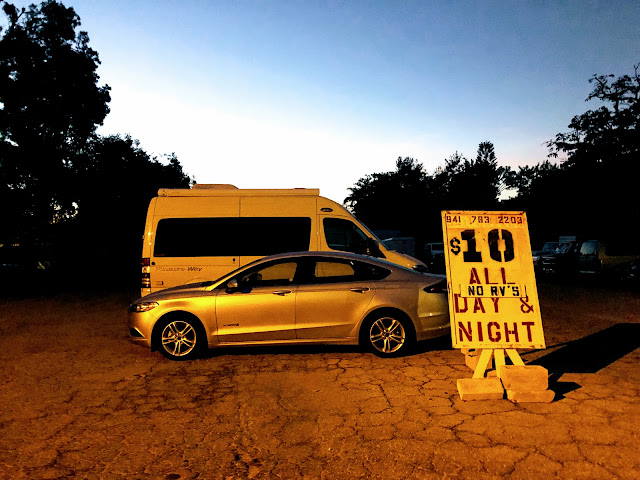 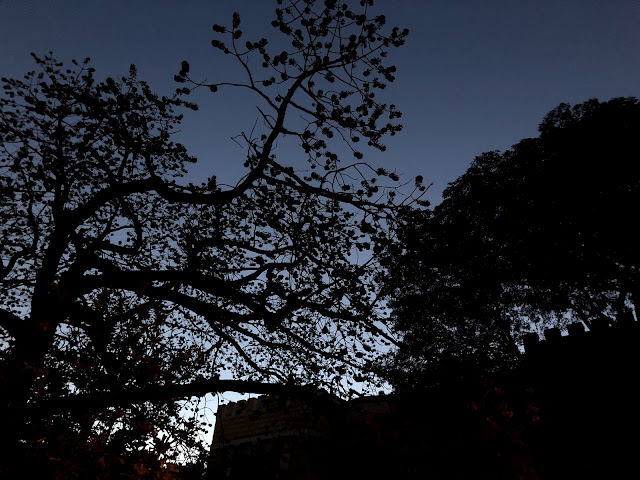 And just to finish off my morning this character was busy jogging and doing push ups in a fishing town know for its drinking problem. Key West as small as it is, is big enough for all of us it seems. 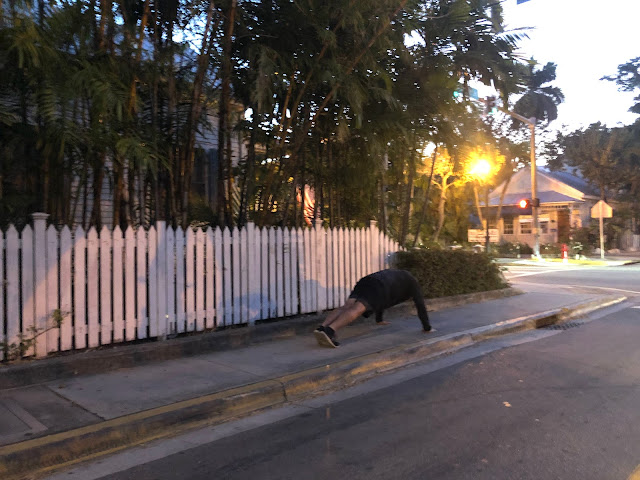