We spent much of a day driving US Highway 90 in a straight line across Texas. You'd think it would get boring but this was what we had left the Keys to find: something different. We passed through small towns and I'd like to describe them as "quaint" but they aren't. At  best I could say they are utilitarian but there is very little of the picturesque  or memorable about collections of homes, mobile homes, trailers, broken down cars and stuff I couldn't put a name to hidden by dust and weeds. 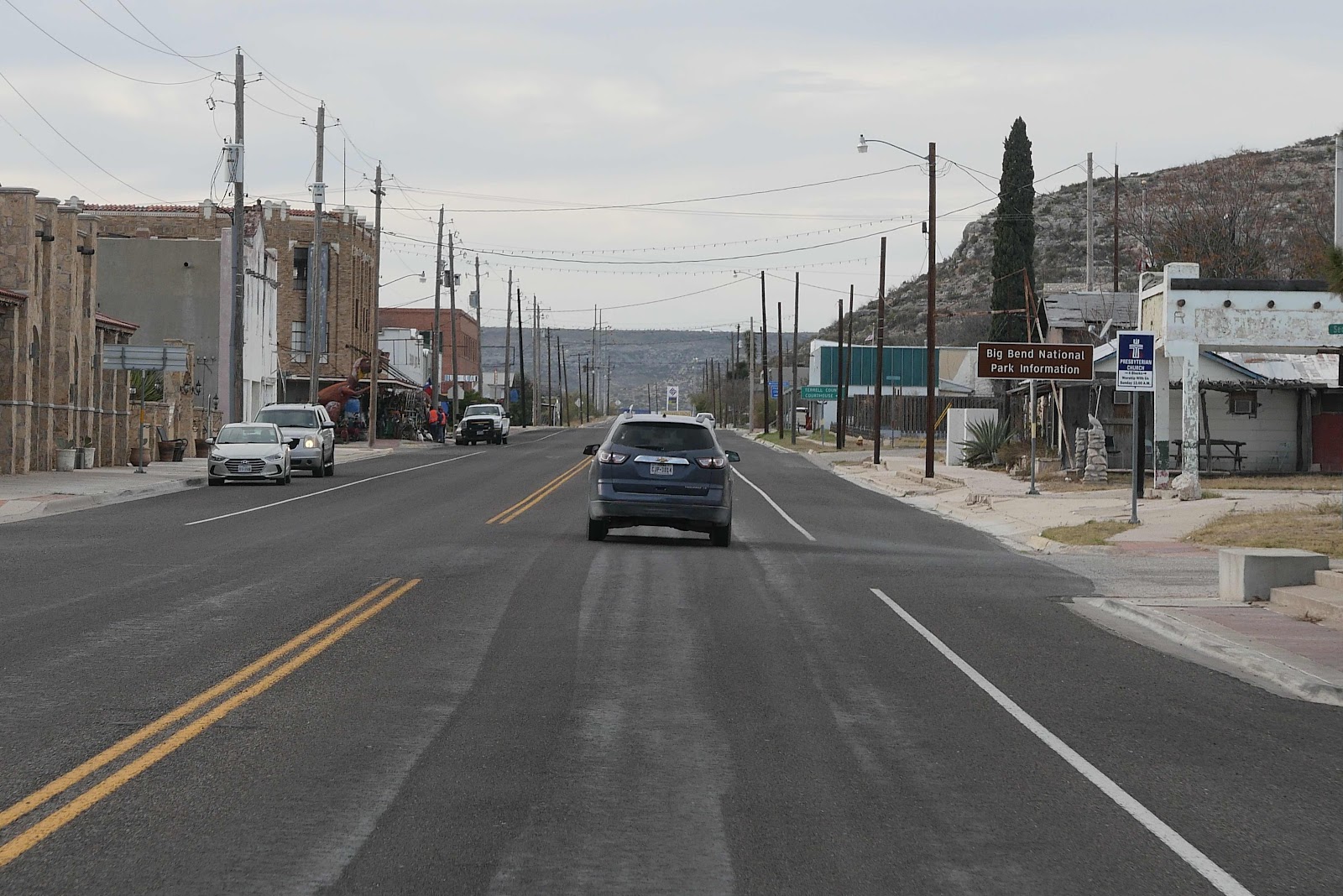 We didn't stop as we had gas and a full fridge by design and the plan was to get close to Big Bend National park which is the big and basically only draw in this part of the world where the Rio Grand makes a big bend. Our goal was the town of Marathon, which I joke ad nauseam is not the one in the Keys. 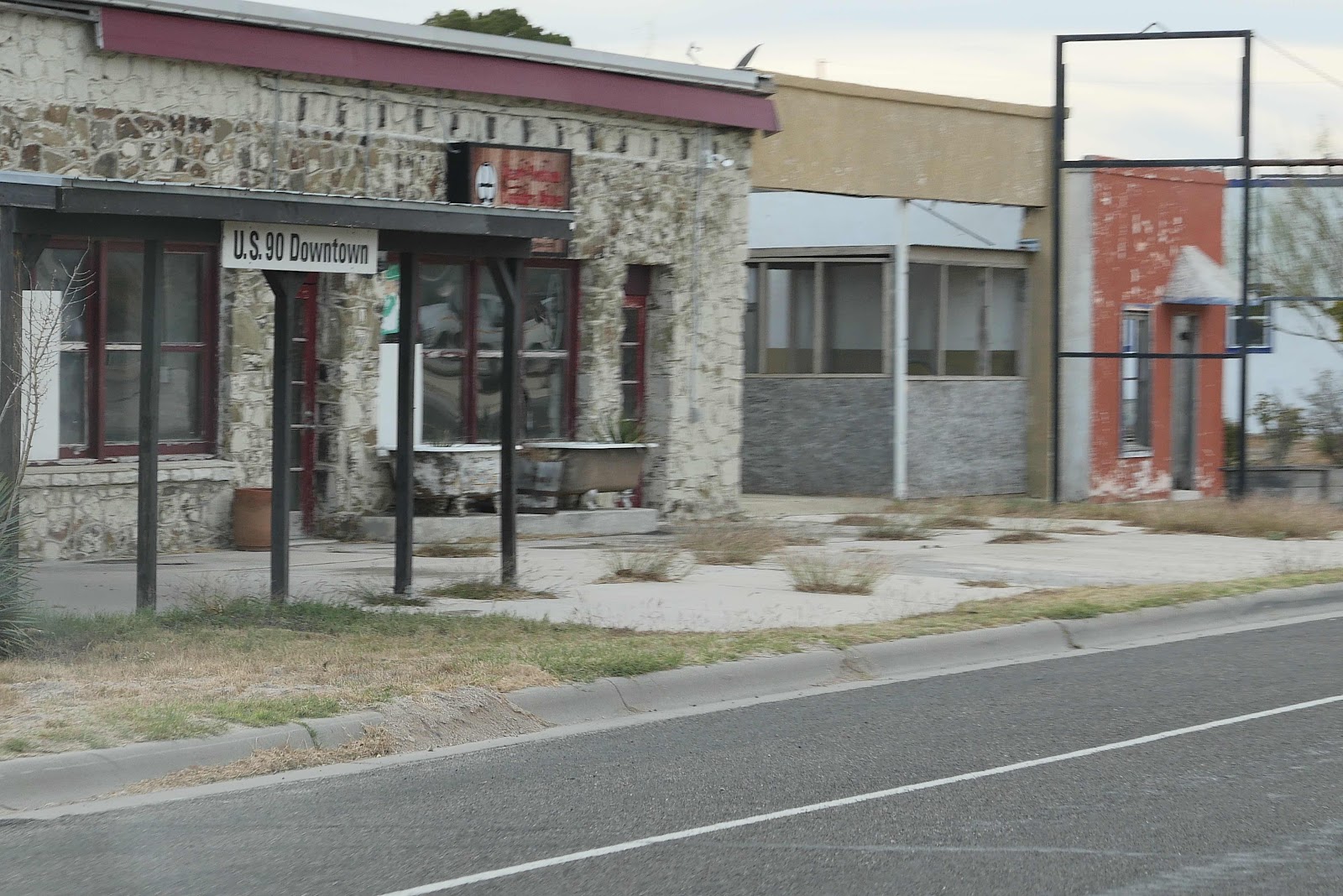 Cell service came and went and mostly went so we relied on our wits to amuse ourselves. I sent a couple of texts when my phone woke up to this message. Thank you Mexico for filling in where the US failed us! 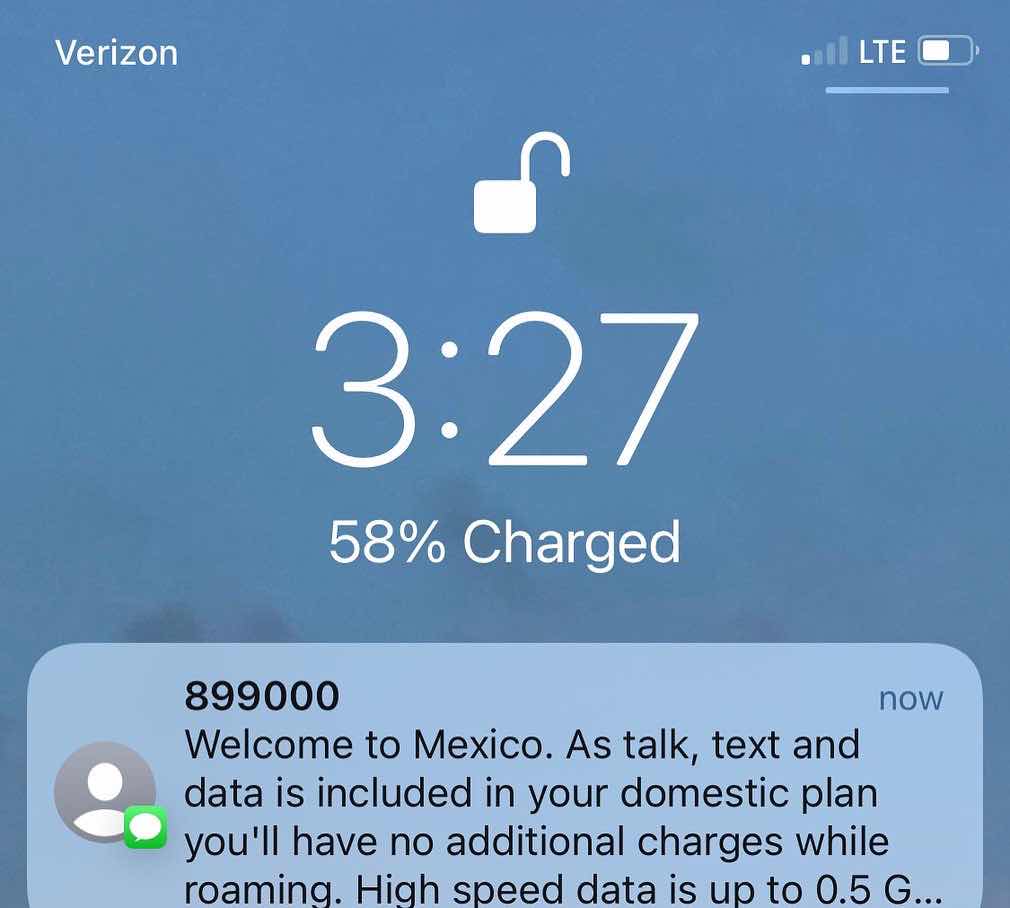 Long and straight with frequent passing spaces and occasional picnic areas where you can park for up to 24 hours. That's west Texas and US Highway 90. 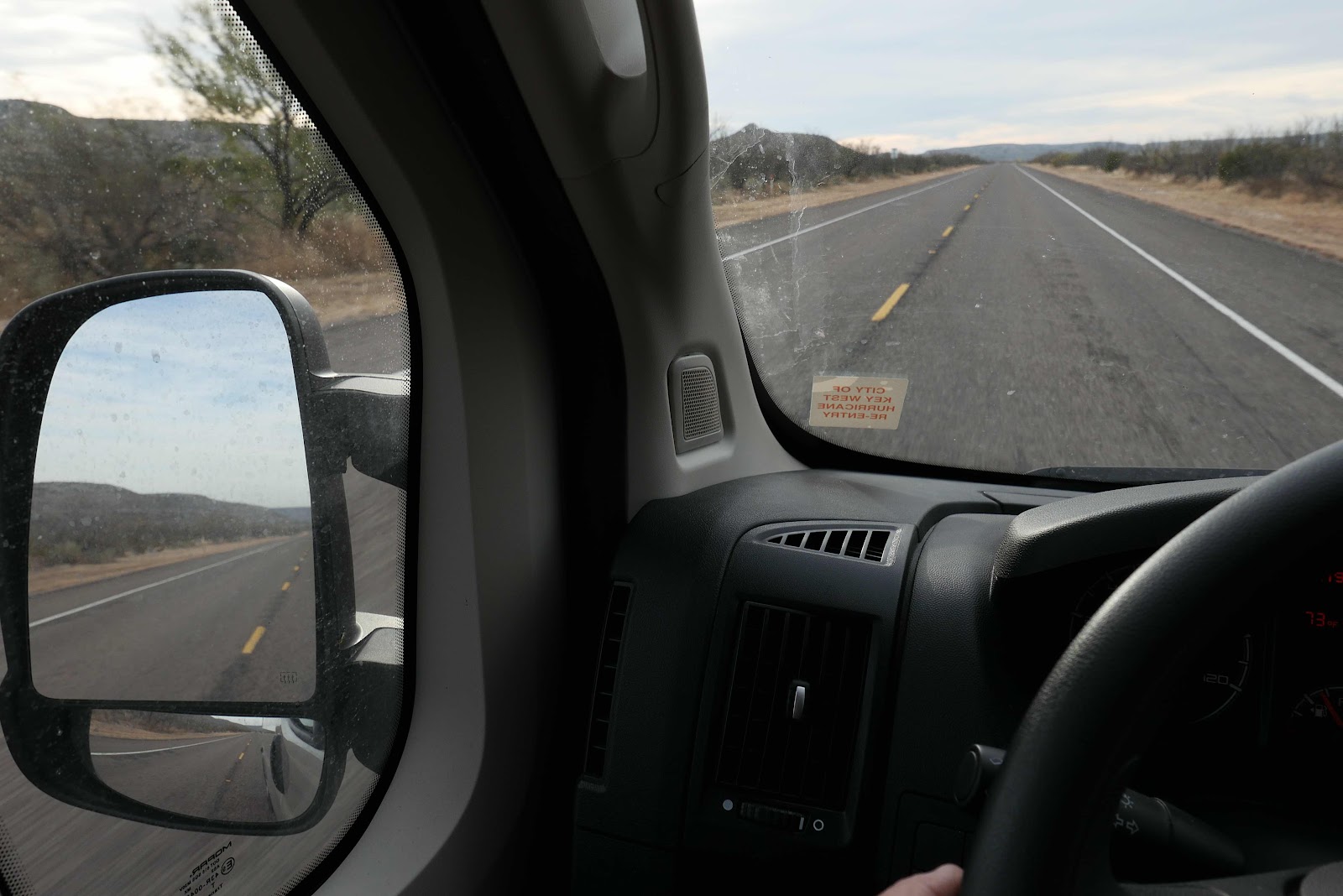 I got bored enough to photograph myself and the van as we cruised at 55 miles per hour. We planned to arrive close to sunset and had no need to hurry and burn gas. 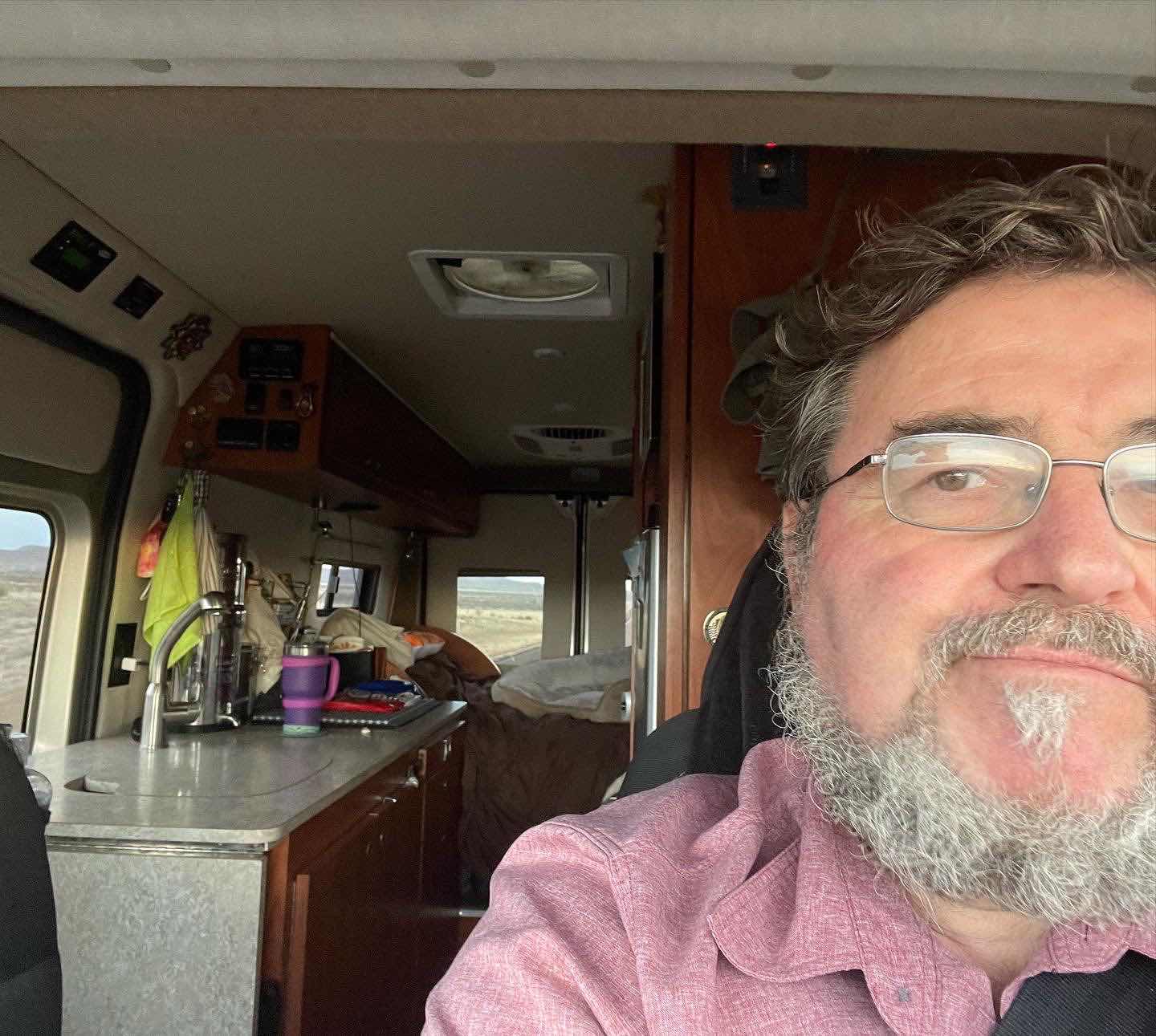 We didn't go deep into Marathon, we had no need to… the gas station Alon as at the junction for Highway 385 south to Big Bend. I pulled in to get eight gallons of gas to avoid the risk of getting close to running out   The Del Rio fiasco of nearly running out twice was uppermost in my mind. A pick up truck pulled in to the next pump. The driver, a man in his fifties glanced at GANNET 2. "From Key West?" he asked. It turns out his wife had been vacationing in Key West a couple of weeks prior so we talked about the relative merits of US 1, slow and scenic, and Highway 90 fast and empty. He laughed when I said I was enjoying the new and different views as he has seem them a lot. "Check out the pizza across the street," his parting words. "It's really good." 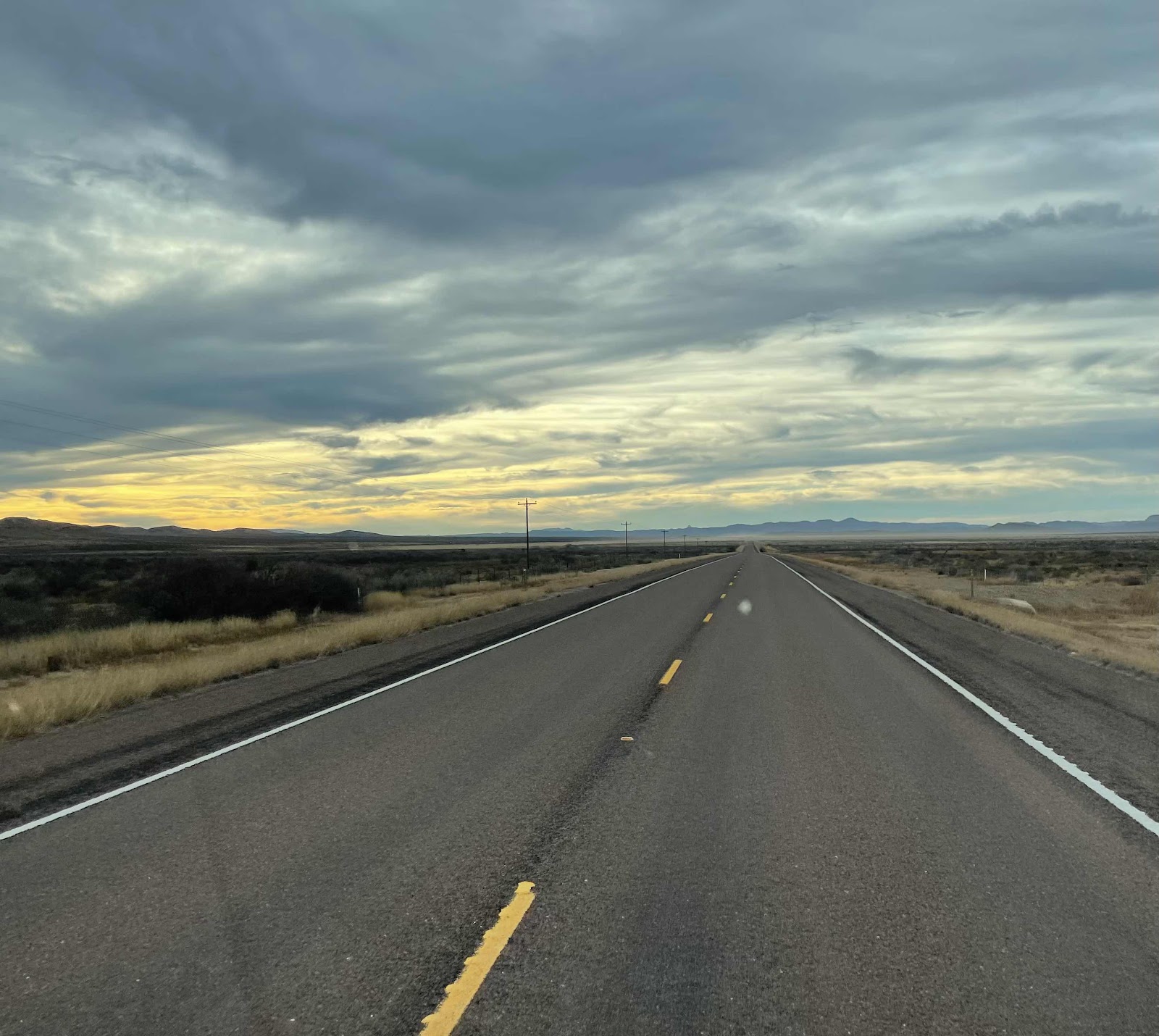 He was correct. The huge pile housing the pizza parlor (below) was a hive of activity and what we saw looked good. Layne agreed to save the tamales which were still slowly defrosting and we ordered sausage mushroom and pepperoni on a twelve inch pizza. 30 minutes theny said so I set my alarm and took Rusty off to inspect defunct machinery and dust devils. 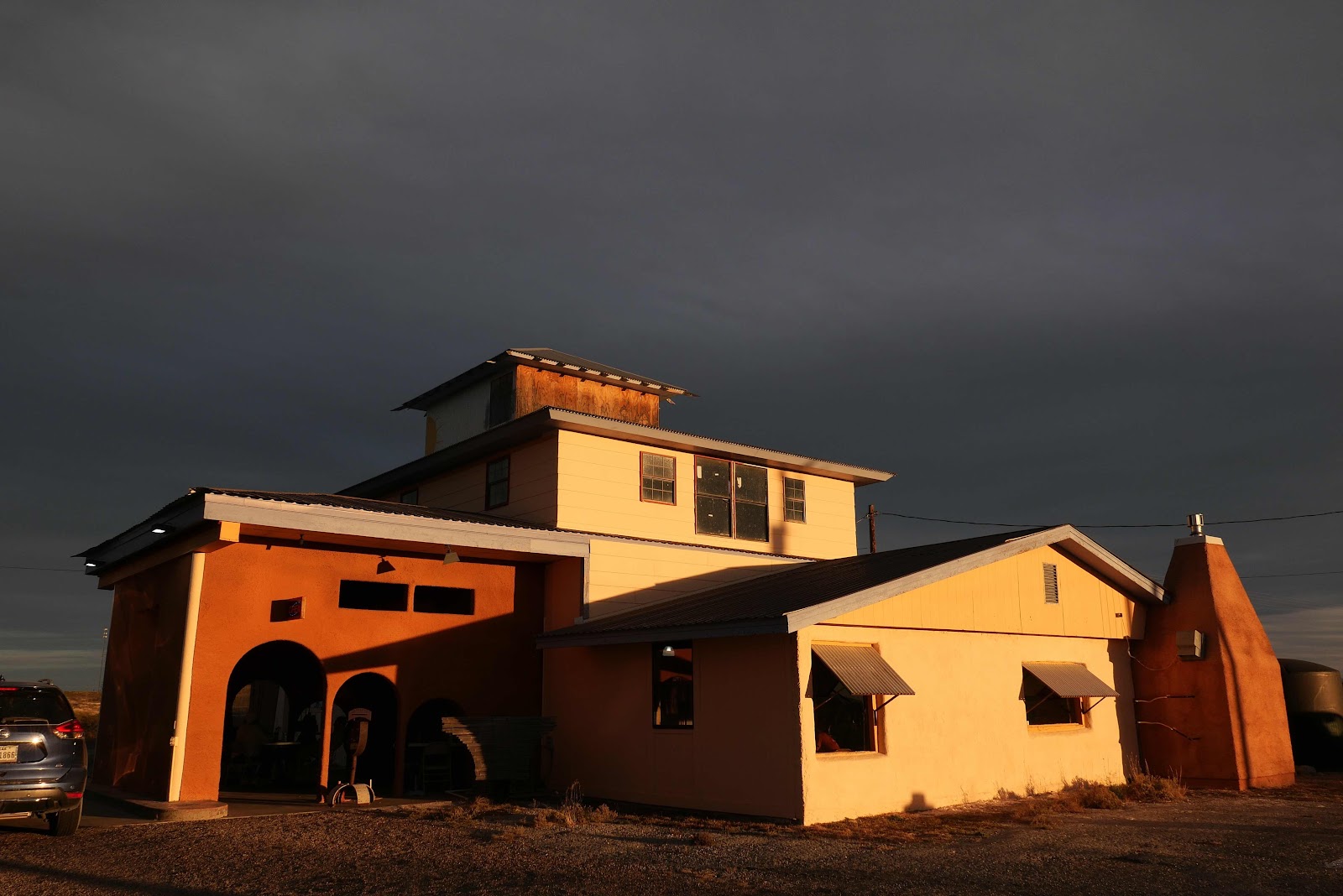 Someone who looked like the owner's daughter popped out after twenty minutes with our pizza  and a smile. The van immediately smelled delicious. Ten minutes later we were parked as night started to fall at a rather clean neat picnic area along the highway. We had  a strong Verizon signal and NPR at 93.5 ( Marfa Public Radio), our entertainment cup flowed over! To my surprise the picnic pull out was empty and it seemed so convenient, just an hour's drive to Panther Crossing, the headquarters of the park. Dinner was delicious, sleep was deep and the pizza box, now empty, fit perfectly in the roadside trashcan. 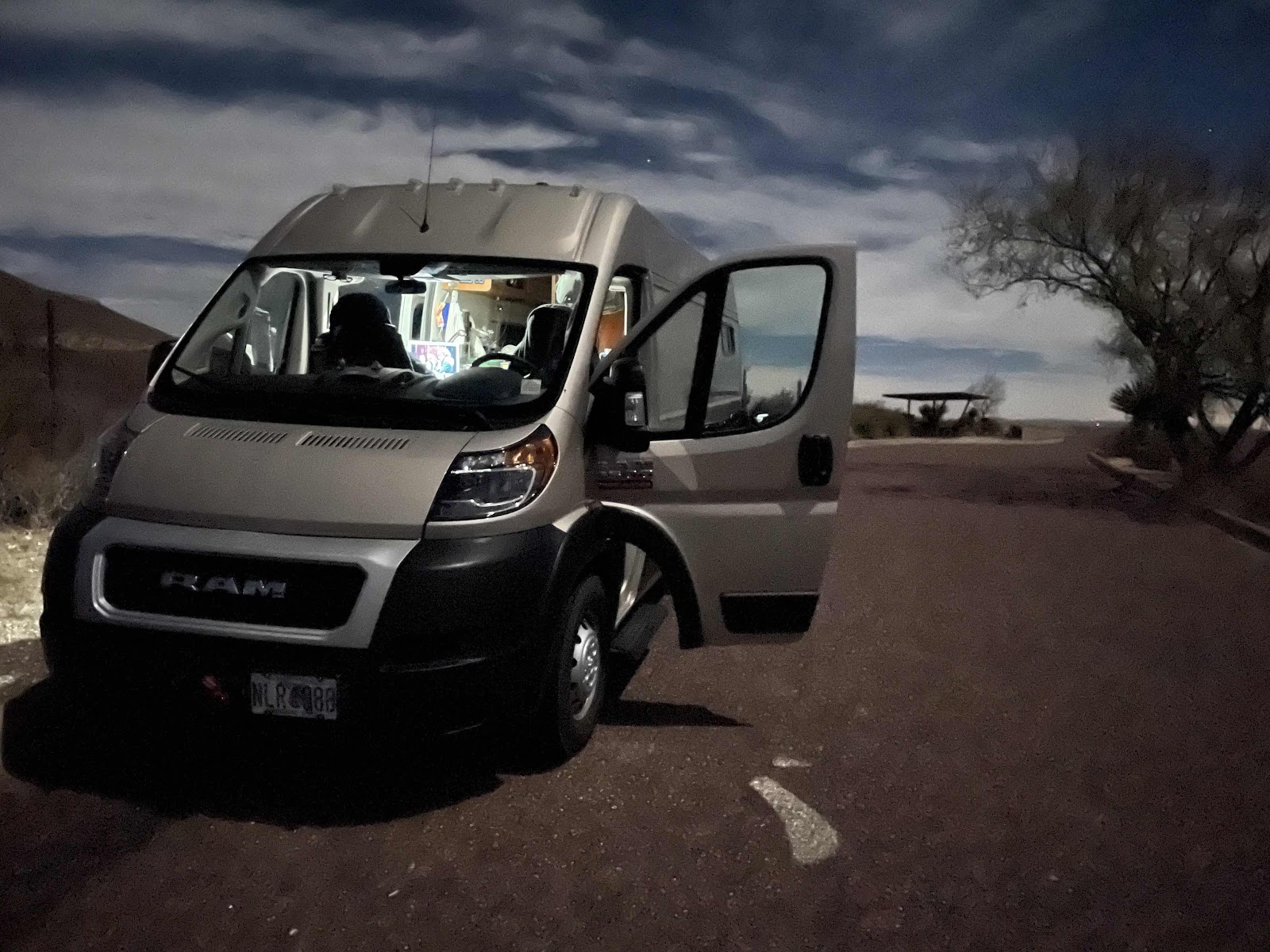 Posted by Conchscooter at 1:00 AM 6 comments: