Look at that water and those skies, a perfect day for a ride across Key West harbor. So we did just that. 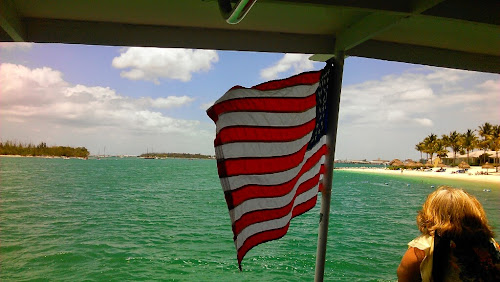 Our destination was Latitudes on Sunset Key. My wife had the day off for a business meeting that went well so she wanted lunch in town.

"Lupita's," I said. Too far she said, unwilling to drive all the way to Bertha Street ten minutes away. Such is the effect Key West has on you after a short while. Anything beyond walking distance is far.

"Finnegan's Wake," I riposted thinking of their rather nice strawberry tart and custard for pudding. I figured a sweet end to the meal was on the cards as it had been a good morning for the wife.

"Sunset Key," she decided. "Today we have lots of time and we can spend some of it riding the ferry." The concierge at the Westin put our names on the 12:15 boat and we got in line to ride. 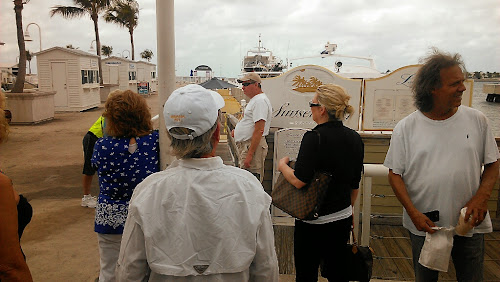 Like I said it was a lovely day to ride and we looked around on the five minute crossing. At the island dock we met an old friend of mine I used to captain with. Betsy likes driving boats for the Westin as she gets paid vacation and has regular year round work, which is hard to find for boat captains; I became a police dispatcher after captaining for a few years. Her kid plays baseball at school, in a town mad for youth baseball. Her life is made in the shade. We compared notes, my wife with her fabulous new job in Adult Education, me plugging away on night shift and Betsy successfully raising a kid in Key West, the hardest of cities. 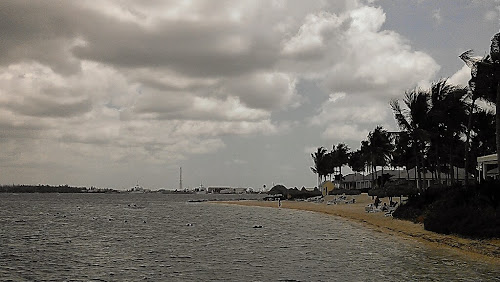 Yards ago Sunset Key was called Tank Island where the Navy built tanks for fuel on a deserted speck of land in the harbor, never used the tanks and ended up giving the island to the city. The city then sold the waterfront for the Westin (the Hilton as was) and the island as well for eleven million dollars... the deal of the century in a town where modest homes sell for millions. So Tank Island became upscale Sunset Key where millionaires and public figures get to enjoy Key West away from us hoi polloi. 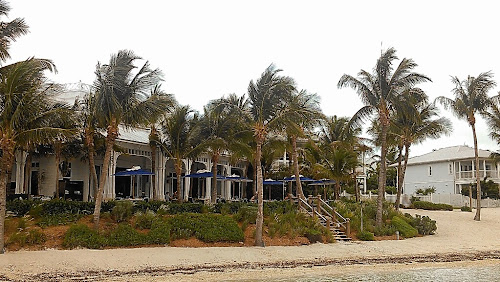 They say Oprah Winfrey and Kevin Costner among others, come here to relax as has the Secretary of State of various administrations along with ordinary one percenters who like tennis and golf carts and privacy. Look but don't enter: 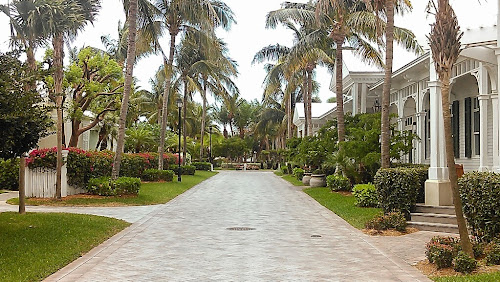 Latitudes is open to the public as is a short stretch of beach which is accessible for a fee. The restaurant is pleasant, the bar is plagued by a television and the staff is attentive to the point of being obsequious. Want to know how wretched rich people are? Hang out in their hang outs for a while and watch the staff act like beaten puppies. 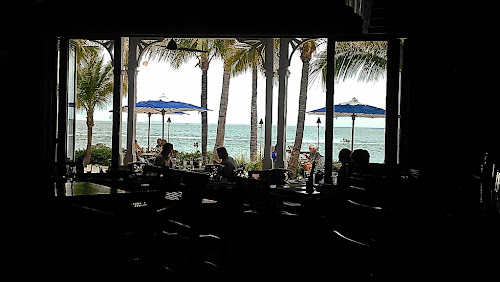 The surroundings are lovely of course and coconut palms sway in the breeze, deprived of nuts, emasculated to ensure the comfort of patrons. 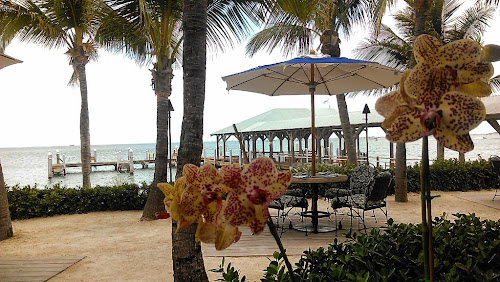 Dinner at this place is ruinously expensive but lunch is relatively reasonable. We had one beer, a soup and two sandwiches for $48 plus tip. The ferry ride is free as is the view and the margarita list is extensive... 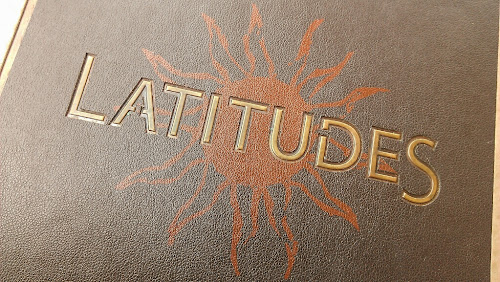 The lobster bisque was the best my wife ever had, she said. Sweet, creamy and smooth it was quite the indulgence with a crouton floating in the middle topped with pieces of actual lobster. We shared the bowl and it didn't last long. 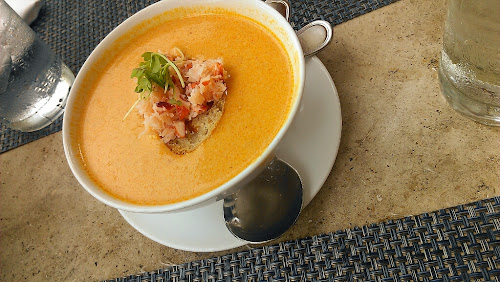 The lunch menu offers a several starters and some salads plus grilled meat chicken and fish with rice but the sandwiches are in my opinion the tour de force. They come on suave holders swung along by po faced staff. 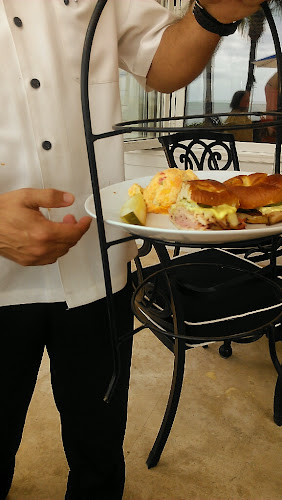 My Cubano had lots of meat and a slice of melted Swiss wedged into a roll that was sweet enough to make this a Media Noche, traditionally a smaller sweet, middle of the night snack. It was delicious of course as was the famous Laitudes sweet potato salad. 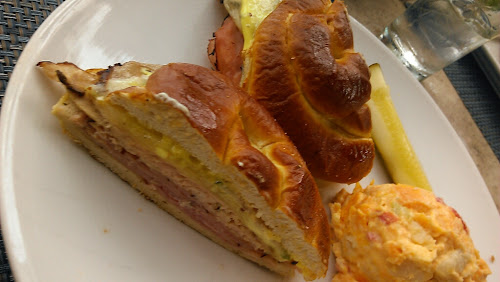 My wife had trouble eating all of her huge grouper sandwich and limited herself to just the fish on the second half of this monster. 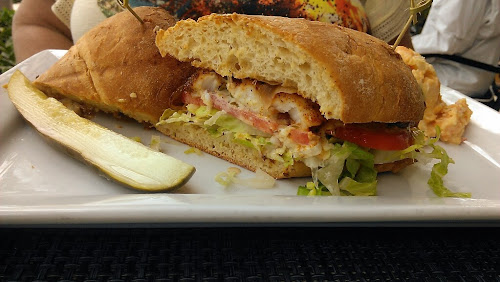 I had a Stella served in the traditional long glass. They have four draft beers and a variety of bottles available. 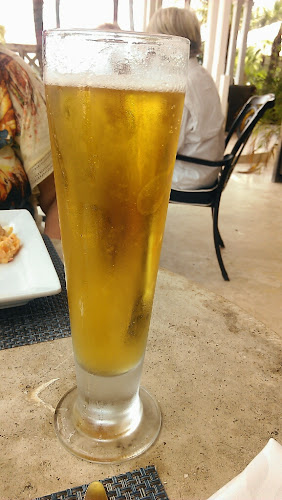 We skipped dessert but I know from experience their crême brûlée is remarkable, as it comes in a dish with three troughs each filled with a flavored burnt custard. 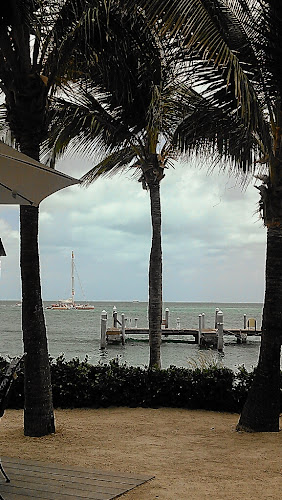 The day was perfect with intermittent sunshine poking through puffy clouds and the remains of an unseasonably late cold front long awa humidity. Just right for sitting out. 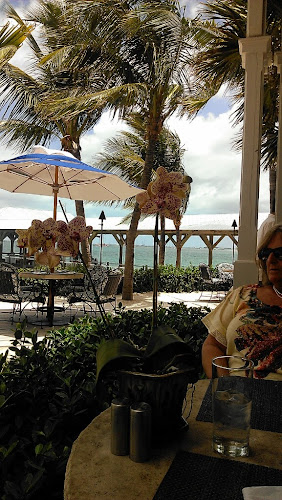 The restaurant wasn't crowded, a reminder if one were needed that winter is over. 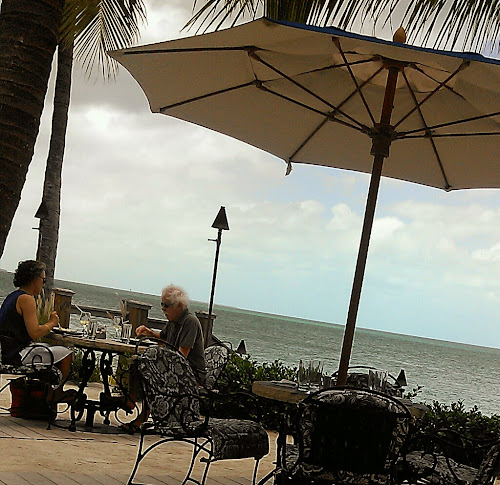 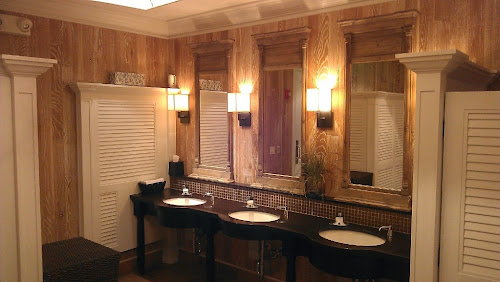 The loo is as remarkable as the rest of the place, all cool stone and sanitary woodwork with piped music to ease your bowels as you sit and think. Even the paper towels are embroidered which seems a monumental waste to me for a one use object. One day our one percenters will learn to join with the rest of us in the mantra that less is more. 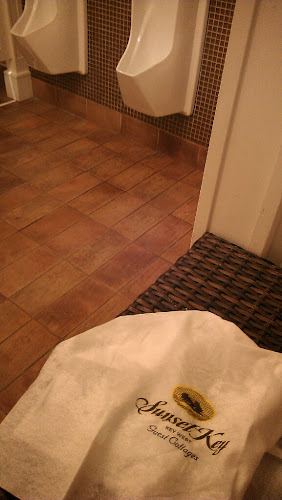 Hemingway has his place on the wall of the gentleman's convenience of course. Everyone wants a piece of Papa: 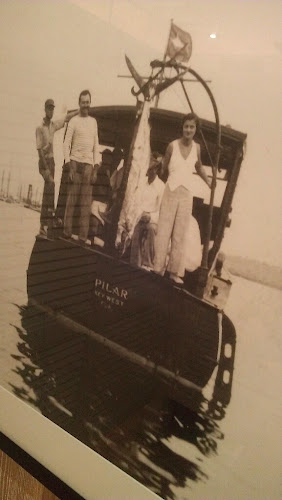 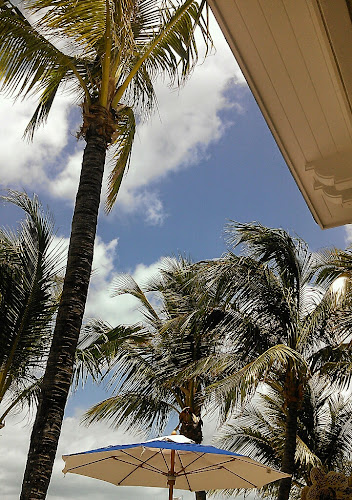 What a lovely day. 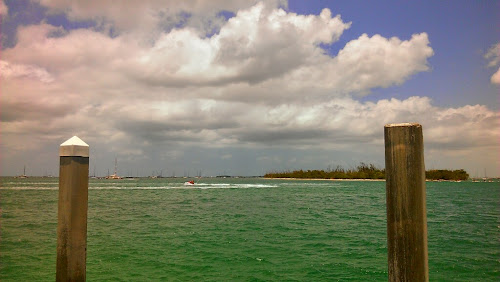 Lupita's or Finnegan's would have been fine of course, but the views make this place special and they know it. 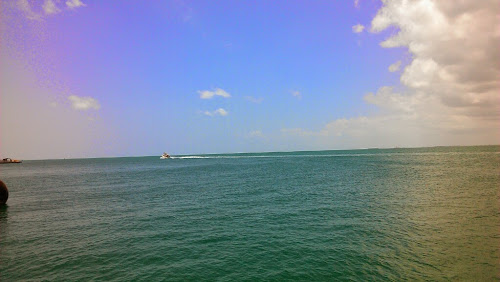 I find it intrusive when perfect strangers, after I have spoken but two sentences home in on me and ask coyly where I'm from with my Mid Atlantic speech patterns. In Key West every one asks where you are from as a way of making a connection, however I don't frequent bars and no one can relate to where I'm from anyway, so I find the question tedious and intrusive. I cut this nice couple from Louisiana a bit short when she poked her snout into my Anglo-Italian background, "You're not from here," she simpered. I wanted to tell her she was so sharp she might cut herself but I was rather sharp myself. I repented immediately and had to spend te rest of the ride not admiring the view but finding out instead about life in rural Louisiana. I said I liked New Orleans which was the wrong thing to tell these devout small town people so I generally made a dog's dinner of the whole bloody encounter. I wish I could be more like Doug Bennett and just be cheerful with strangers, like this: This Week on the Island . The problem is people just make me nervous and then I bugger everything up trying too hard to relax. 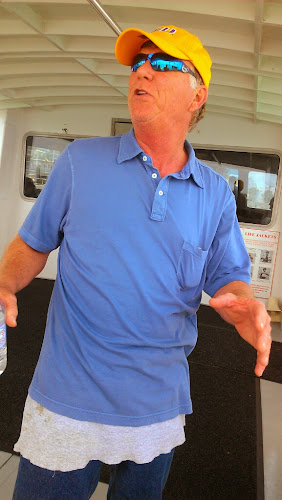 Then the ride was over and we immediately went our mercifully separate ways. 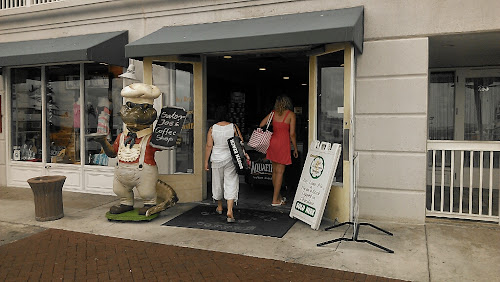 Back to the real world where ordinary people, shop for trinkets and ice cream. Thank you Lord for ordinariness. Latitudes is lovely as a once In a while thing, but renting a cottage there and hanging out in that rarified atmosphere would be too... rich for me.