Conversations On A Beach 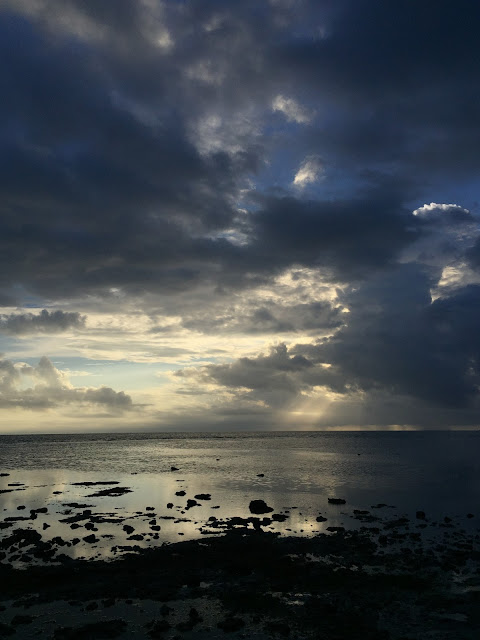 I don't get to this beach often enough and I find it quite pretty. Especially at an extra low  tide. 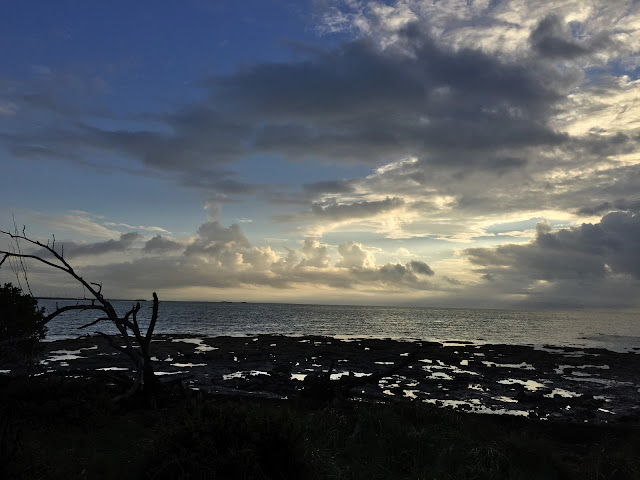 The tide was miles out and it looked like Rusty and I had this place to ourselves. 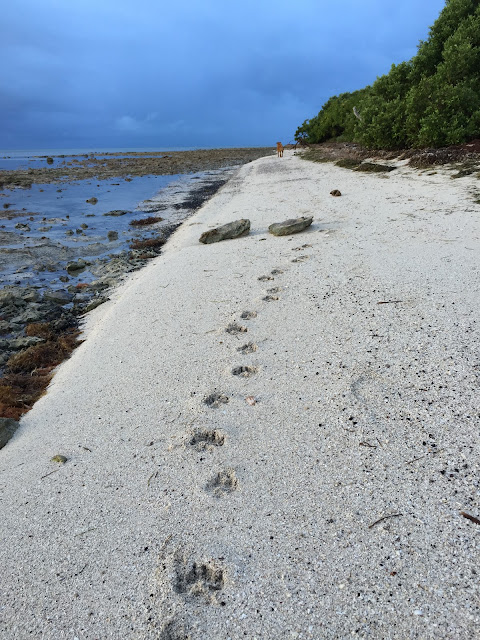 Not so! We spotted  a man with a spotted dog down the beach and after i reassured him that Rusty had no murderous intentions (what dog does?) Rusty got down to the business of getting to know the Dalmatian. It was from Connecticut and his owner travels down for three months in an RV before spending a  few weeks in Spring on Florida's East Coast. Then the big brown Labrador showed up and the three of them ran and ran ran. Until they could run no more: 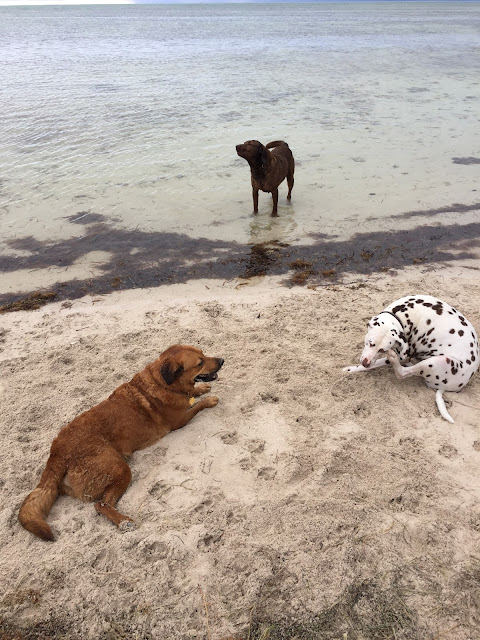 The old men were pretty funny talking about their health, not always good, they motorcycles, not always appreciated, and the state of the country, not always appreciated by any of us. The guy in white from Kentucky told a fund of stories with deadpan delivery and a thick drawl that made the tales all the more enjoyable. He could put six syllables into one indignant "Fuck That!" when pondering the interfering nature of the universe. 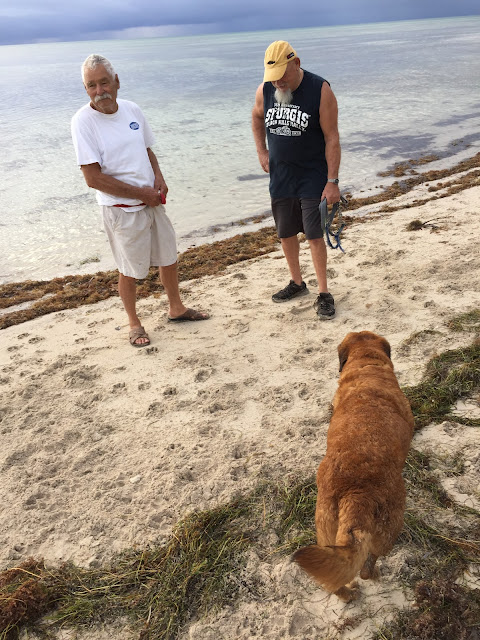 They have been meeting every winter's day on the beach for the past six years. Rusty ingratiated himself. We talked politics after one of them talked about sea level rise and laughed at Trump's rejection of the science. I think they supported the President-elect but with a healthy dose of skepticism which I found realistic and refreshing. For my own part I blame Democrats for failing the people who supported Trump in the Midwest and I'm ready to wait and see what happens. 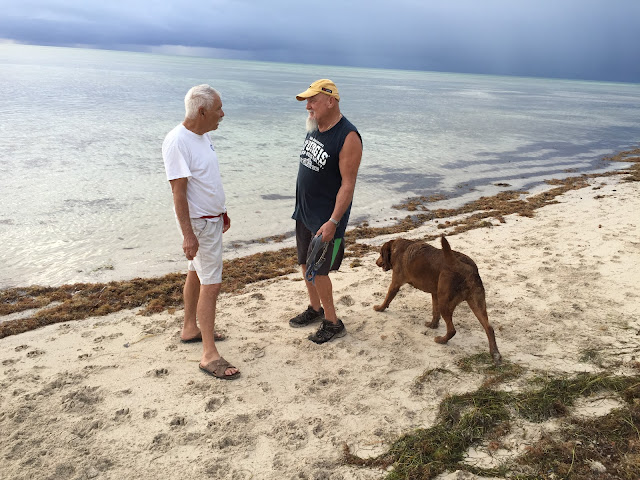 Rusty as always has to stake his ground with big dogs but his snarl is just his way of saying he's a force to be reckoned with even though he's small.  The other dogs chased him anyway and he had a blast. He is a very different dog from the scaredy cat I first met last February 27th in Homestead. 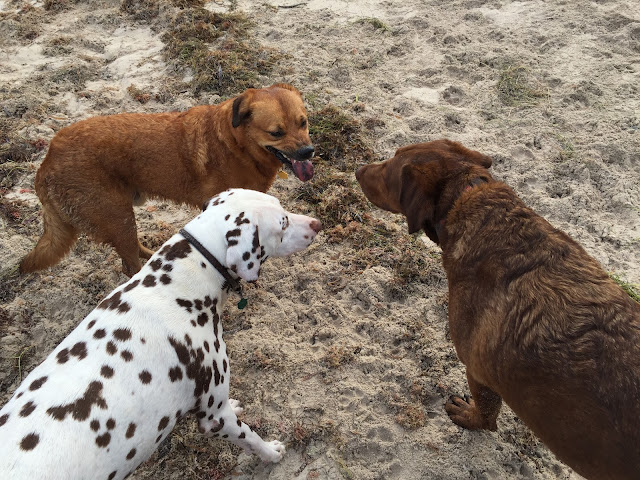 Eventually we started back, and I was ready for bed. On the way I got to thinking long and hard about my vote in the last Presidential election. I hear  a lot of gloom and doom about democracy in America, as though journalists want to imagine us hellbent on a path to Fascism but I don't see it that way. I think Trump will lead the Presidency of Unintended Consequences as he seems rather uninformed on the ways and means of the political process. Some of that will be dreadful, some of it may not. I think the next few years will be quite interesting. Part of still wishes Clinton had won, but I do rather view my vote as an act of expediency which is why I don't think she stood a chance of winning. Many of us voted for her, but without enthusiasm. I feared Trump and I still do, because I have seen revolutions and I have read about them in the history books and when I voted I feared what path we would take were we to choose revolution. I still fear it so perhaps  mine was a cowardly vote hoping for the best by continuing down the rather lackluster path we have been following. I see Trump as a product of thirty years of anti-government narcissism by the Republicans in government who have spent decades telling people government doesn't work. We now find ourselves in the absurd situation of hiring for President a man who has no clue how to govern. Not only that he seems somehow to have given free license to the worst elements in society in the US and elsewhere to go public with their racism and bigotry. What happens if Trump fails to deliver jobs and change to the underemployed Midwest as promised I don't want to think, but their disappointment could have long lasting repercussions for the ruling classes.

I couldn't see myself voting for Trump but part of me hopes he will get his shit together and become some sort of Teddy Roosevelt a cheerful eccentric full of independent hit or miss. On the other hand Trump seems so unprepared and uninvolved I wonder whose advice he will take. It seems as though his lack of convictions of any sort make him susceptible to the voice of the last person whispering in his ear. That's no way to govern and the fact he is busy hiring people with a Christian agenda to run schools and housing and social services, that he is hiring bankers and millionaires to run the economy all spells a lack of focus to me on the promises of the campaign. Maybe they are revolutionaries in three piece suits but I somehow doubt it. Campaign promises are tumbling like the breach of the Berlin Wall, fast and without waning. 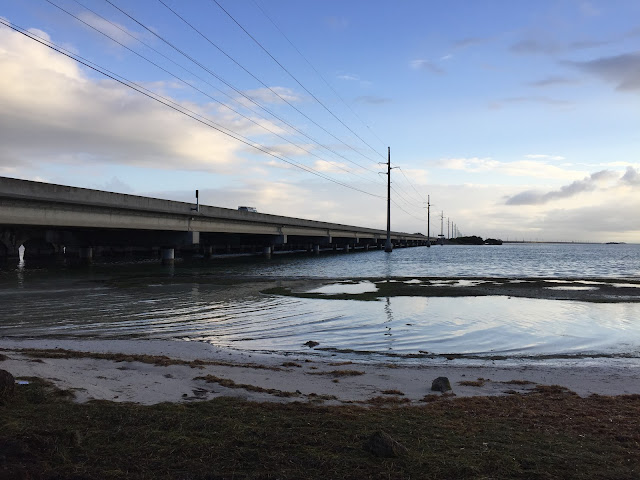 At least I know whatever happens I live here. Cool.
Posted by Conchscooter at 12:00 AM 3 comments: