I was riding into work this past Thursday evening and it occurred to me as I approached Key West my odometer on the Bonneville was reading 128 miles. I had a few minutes in hand after a relatively brisk ride into town behind some fast moving cages so I pulled into the Key Haven Shell station (shown below) to fill up. My Triumph has a four gallon (U.S.) tank and it tends to hit the reserve portion of the tank, the last  full gallon, close to 134 miles so I figured to fill up as I could make a quick stop and not be late for work.  I should never have bothered. The pump squeezed 0.15  of a gallon of unleaded into my gaping tank and then dried up. I looked at my watch  and figured if I was futzing around too long trying to get gas out of the pump I might end up late to work, and I'm too anal for that to happen so I got going and figured I could simply get gas on the way home in the morning. Then a weird thing happened. 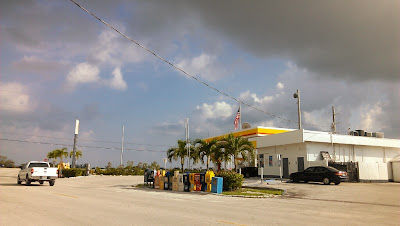 Twenty minutes into my shift as I was  busy explaining how to dispatch rescue to an eager new trainee, my colleague Shannon (a former trainee of mine) called across the communications room to tell me my wife was on Admin Line 4. Grr I thought to myself doesn't she know I'm...."Help!" the feeble voice cried into the phone, " a weight machine broke at the gym and I got knocked to the ground. I'm covered in bruises that hurt. A lot." Well, that shut me up as I abandoned my post, left Nick in charge and told the trainee to study her manuals. Sooner than I would have expected I was back on the Bonneville riding out of town which was when I remembered I was still low on gas. I actually hit reserve at Mile marker 7, so then I was calculating that the gym is at Mile marker 21 so I had 14 miles to go which should be a piece of cake. Of course half the reserve fuel is stored in the wrong side of the  tank so effective range on reserve can be 30 miles or less. Once I ran out on my way home and had to lean the bike over to slosh fuel into the side of the tank that has the petcock...I pulled that trick for the first time on an Iron Butt ride when I was sucking down the gas far faster than expected at 80+ miles per hour.  And now I was absolutely certain the last thing I needed to do was run out of gas on my way to rescue my wife. Sigh, better stop for gas, I said to myself. 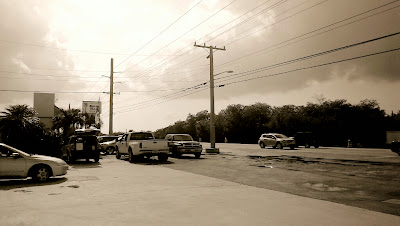 The Big Coppitt Shell is on the south side of the Overseas Highway at Mile Marker Ten making it a good stop on my way home for  a quick refill. I pulled into the forecourt and saw vehicles refueling at every pump except the far one, which became the one I aimed for immediately. I soon discovered why there was no car  at that pump: it was out of service as denoted by the sign and the big gray trash can upended in front of it with two orange cones. In the picture below it would be the pump nearest the camera. The 24 hour Big Coppitt Circle K convenience store is  major shopping center in this community and there is always a line for groceries and beer as well as gas so I figured this was not going to be a quick credit card stop and I had better press on. I wasn't really worried about running out of gas but to get this low was annoying, especially after two efforts to fill up. 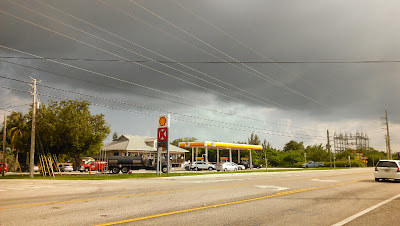 I found my wife feeling rather sorry for herself at the gym, her ankle encased in ice and ready to go home. I figured a trip to the ER was in order, more for peace of mind than anything as she was able to hobble to the car, but her shoulder that had been operated on previously was unable to raise her arm very high at all. I immediately decided that to drive 15 minutes further was the better choice and I aimed my wife's car for Marathon, not Lower Keys Medical Center a dismal apology for a hospital on Stock Island. We've been to Fisherman's Hospital before and the Marathon staff are always helpful and cheerful and take you in immediately. We've sat in the waiting room at Lower keys for forty minutes the "receptionist" glowering at us like we were an intrusion and being completely unhelpful. 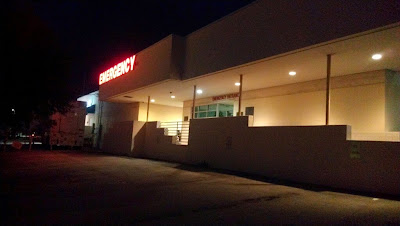 Certainly the receptionist at Marathon's Fishermen's Hospital was kind and made herself available immediately but the heat in the reception area was appalling. It took me embarrassingly long to realise that the front doors were open for a reason, and that reason was that on this stiflingly hot night the air conditioning system was broken. How the staff remained as cheerful as they did I don't know because summer has arrived with a vengeance and being inside that ER was like being underwater. I grew gills to keep breathing the hot humid air as my wife filled out the admission form. She had to hand over her insurance card and we haven't yet received the gruesome co-pay bill but the idea so far is the gym will kindly take care of out of pocket expenses. The sign on the wall was a reminder of the uncomfortable truth that our capitalist system is here to fleece us not to serve us, especially as it is the insurance companies making the money not the doctors and hospitals anymore: 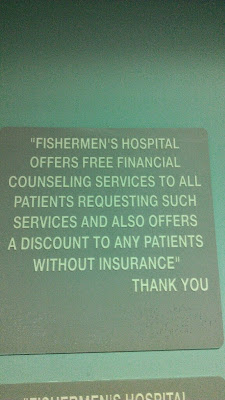 I doubt there are any discounts for broken air conditioning. The evening went much as you might imagine, with an arrival well before dark and a departure around nine pm as I recall. My wife had an x-ray (ka-ching!) - nothing broken, and a the nurse installed a sling (ka-ching!)- and gave my wife a couple of pills to see us through the night (ka-ching!) and the doctor went over the various bruises and joints to make sure they worked and then we were off. And very glad to get back into a chilled car we were too. As is the way with the medical profession no costs were mnetioned at the time, billing is mysterious covert and unanswerable. Supposedly all that will change next year when the Affordable Care Act kicks in. 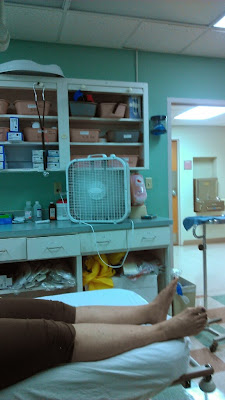 My wife spent a sleepless night next to her ever snoring husband, I'm not quite sure why she needed me at home instead of at work Thursday night. I sleep the sleep of the just and can hardly be roused from my slumbers, nevertheless on Friday I was pressed into service to walk Cheyenne and pick up her prescriptions for muscle relaxers and steroids. Those tickets cost less than six bucks between them, oddly enough. I figured they had misplaced a decimal point and the pharmacist agreed but I scuttled off with my loot before the error was noticed. I then tried to fill up the car at the Big Pine Key Shell (Shell is everywhere around here!) and would you believe the pump wouldn't dispense gas with a message about the pump battery being low and see the attendant inside. I was mad as a wet hen what with all these issues buying gas so I just left in a huff. Gas could wait! I try to keep my tank more than half full to avoid running dry though these gas stations were making it hard with all their issues.

By yesterday evening, thanks to better living through chemistry, my wife was well enough to sit up and have dinner with a friend while I got a ride back to my bike to ride on in to work.  I was heading toward Key West without a care in the world happy to be back on track and in my usual routine when it suddenly occurred to me...I was about to run out of gas! So I made a  quick u-turn, figuring I was at least 11 miles from gas on the direct route and only three miles from the Shell station on Summerland Key, pictured below, which was heading the wrong way, but oh well. 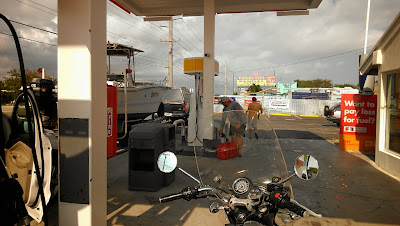 Of course wheh I arrived at Summerland Key, half way back to my house the gas station was packed with not only cars and a giant truck towing a huge boat bit with the crew of the boat scattered around filling a bunch of fuel jugs. I like this Shell station as they sell ethanol free fuel but I was about ready to give up and try the station up the road when I finally got to a pump, and it worked. Miracle of miracles!  I finally got my gas. What a saga, but at least  I got to work on time. 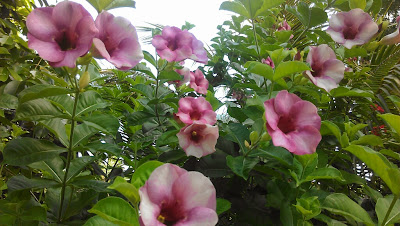 ﻿And to wrap up this extra long tale of gasoline woe I decided to add a gratuitous pretty flower picture. Just because.
Posted by Conchscooter at 12:00 AM 4 comments: